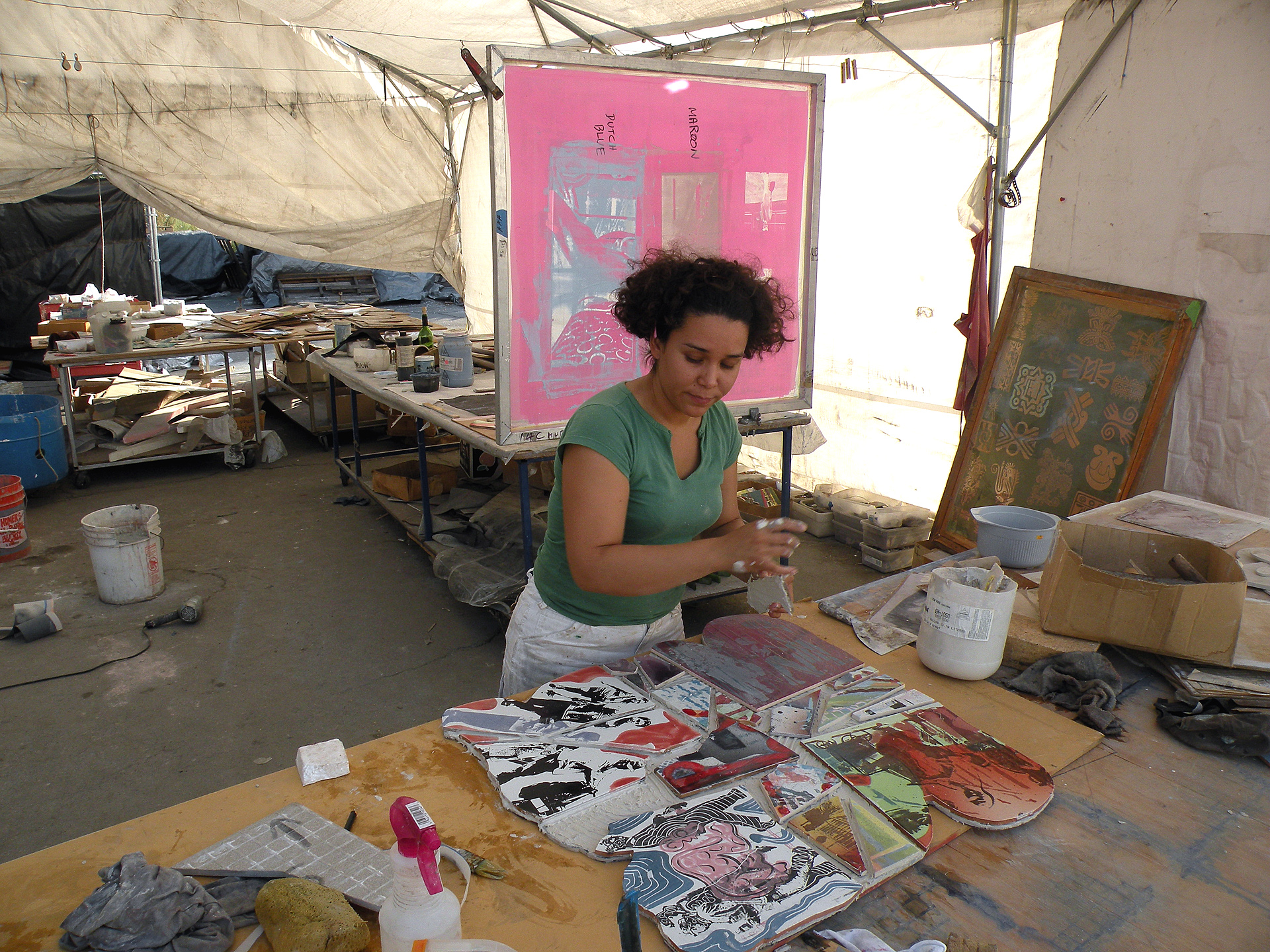 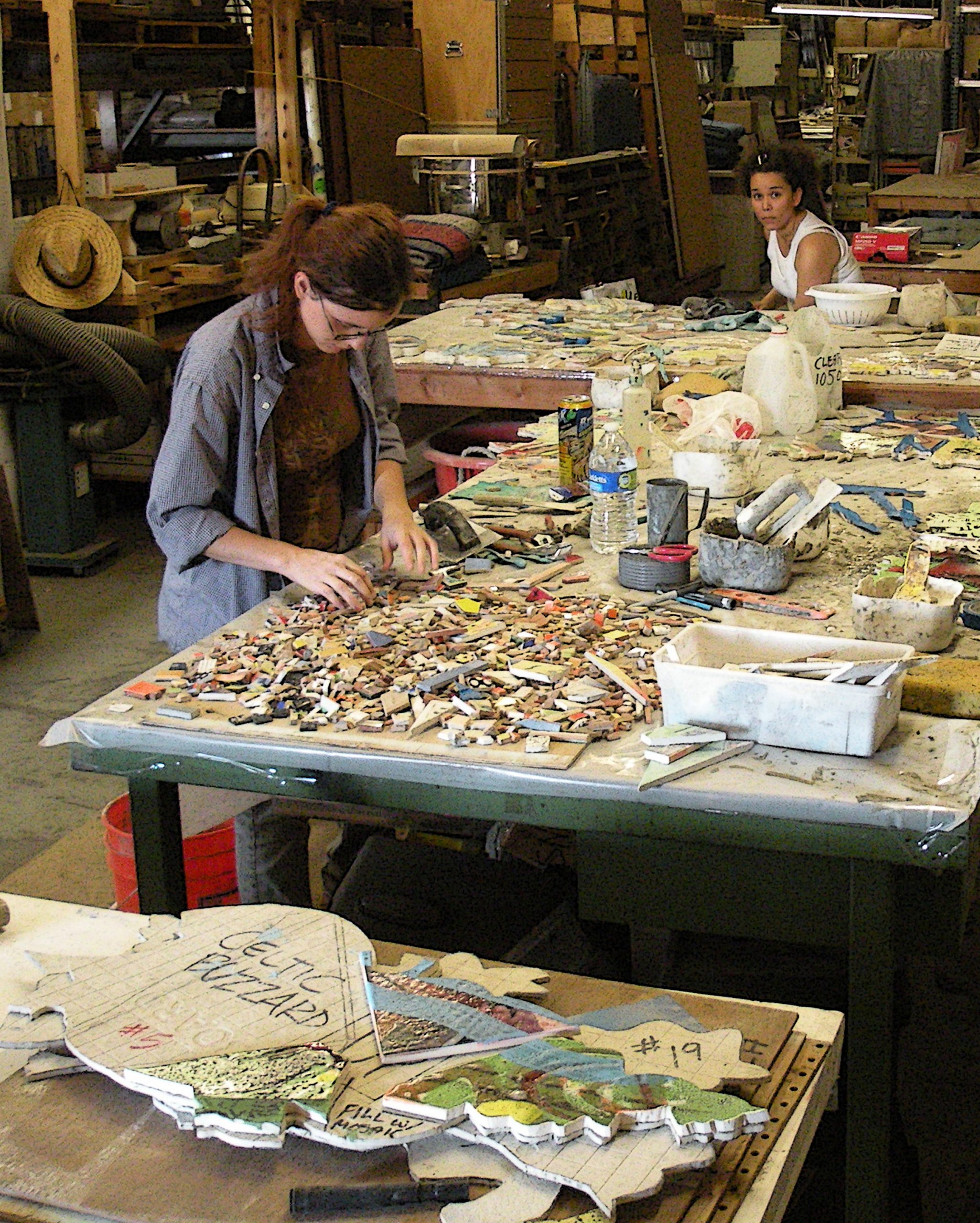 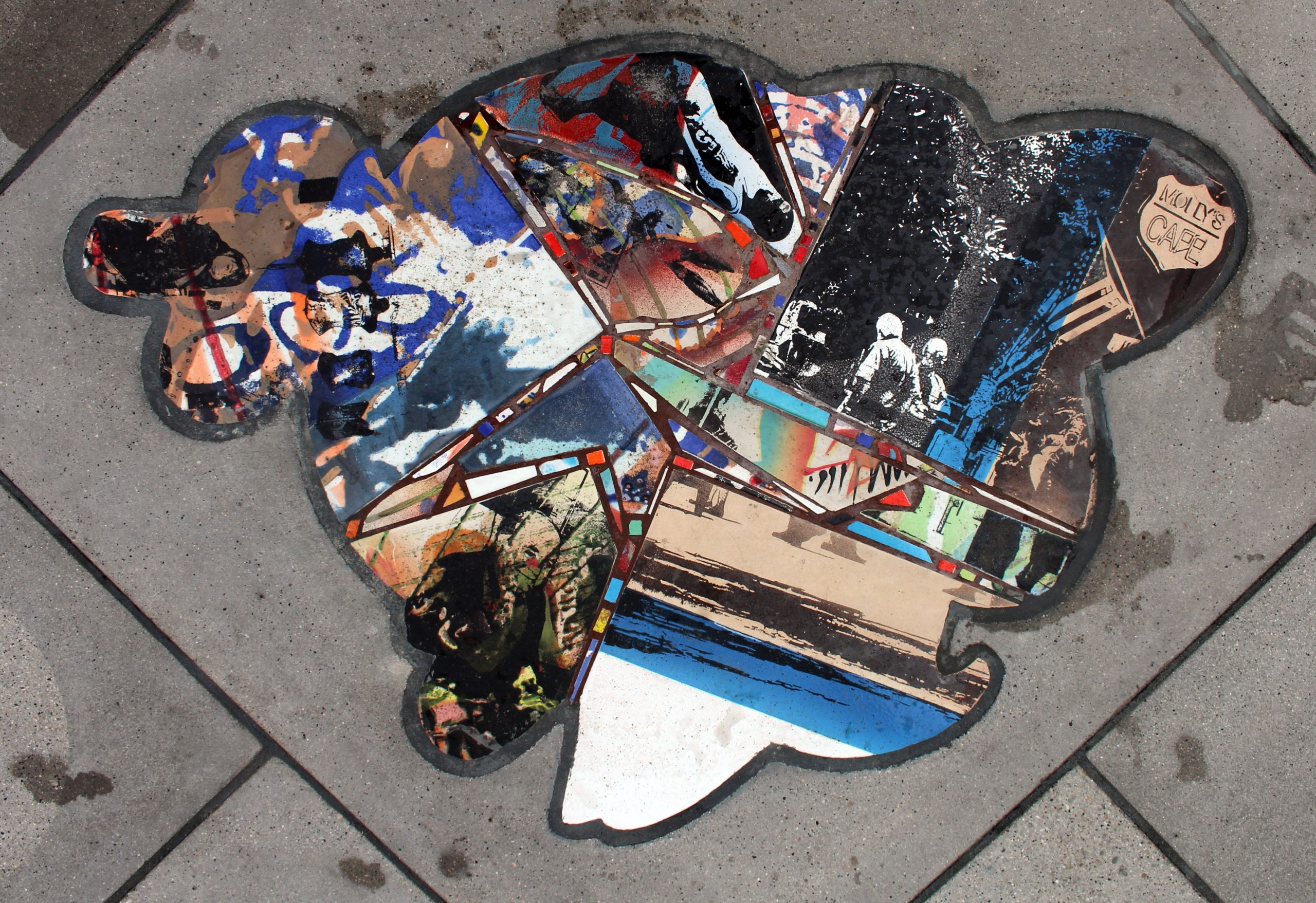 The SBX OmniTrans busway system is a 16 station people mover in San Bernardino County. My Civic Center Station is in the city of San Bernardino, which has the dubious claim of being the second biggest municipal bankruptcy after Detroit. The downtown has a lot of potential. I like to think that the artwork will be positive. It’s made up of about 200 sq.ft. of 97 platform pavers units in the shape of world cultural motifs. Within these are about 150 photosilkscreens of the history and culture of the area topped off with facial profiles in stenciled airbrush.

Like any sunbelt city that thought the horizon was limitless, San Bernardino’s badly managed investments in Icelandic and Greek real estate did not survive the 2008 crash. This did not limit the influx of people migrating to the promised land, but it did bring it to the attention of the world. Big cities seldom fail in the US, and this one did. So what better place to showcase the people than the Civic Center. The stations were designed in a fairly cookie cutter fashion with very little wall space. The station platform was an obvious choice for a “canvas”. After talking with the powers-that-be that no one was going to slip or trip or wander into the buspath, the idea of showing the people, culture, and history was approved. I walked around downtown taking pictures and looked into newspaper archives and historical records. The platform “canvas” was complete. The imbedded pavers are framed by the neutral grey of the cement and work well as seamless addition to the modern hi-tech station design.

One of the good things about this project was the use of the station platform as the horizontal “canvas” for the artwork. It’s nothing new. Art historically, this was always the case. But it seems to have been lost in modern US public art. I have a suspicion it’s the liability lawyers and their fear that the average person will somehow trip and slip over the design or be so overwhelmed by art that they will fling themselves in front of trains or buses. This seems more in the Midwest and back East. Probably the snow. Here in the West there seems to be more acceptance of floor art.

The pavers were set into the platform with a fairly new technique of using modular units that were precast to include the artwork. I gave the precast contractor Styrofoam blockouts about ¼ inch bigger than the tile artwork. They cast the modular units with the blockouts and then set the artwork into the bed at a later date. This seems to be the new way to go.

The tile cutting, photosilkscreen, airbrush, and kiln firing were done by me, and my two associates Yamilette M. Duarte and Jennifer Eversole.