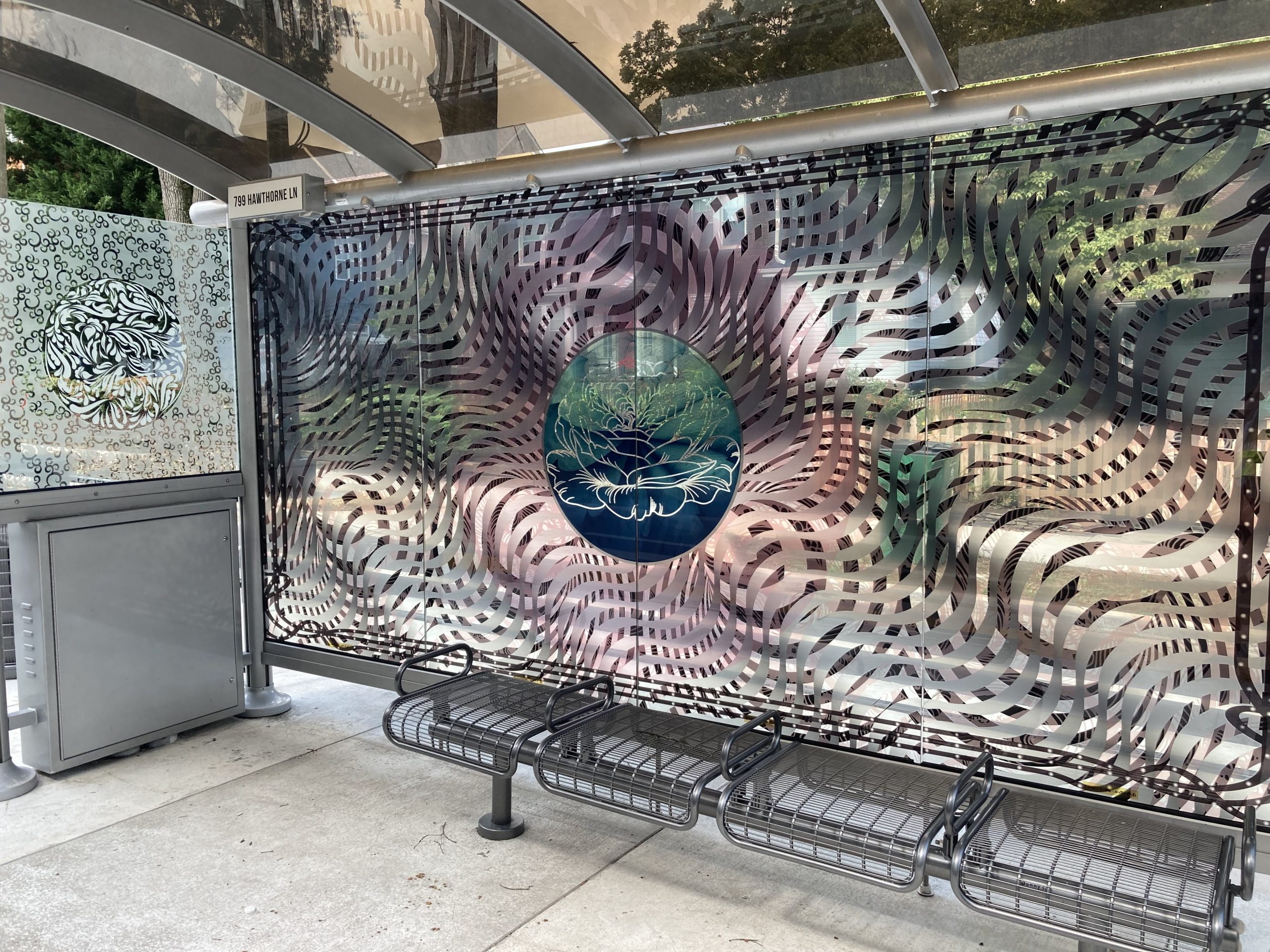 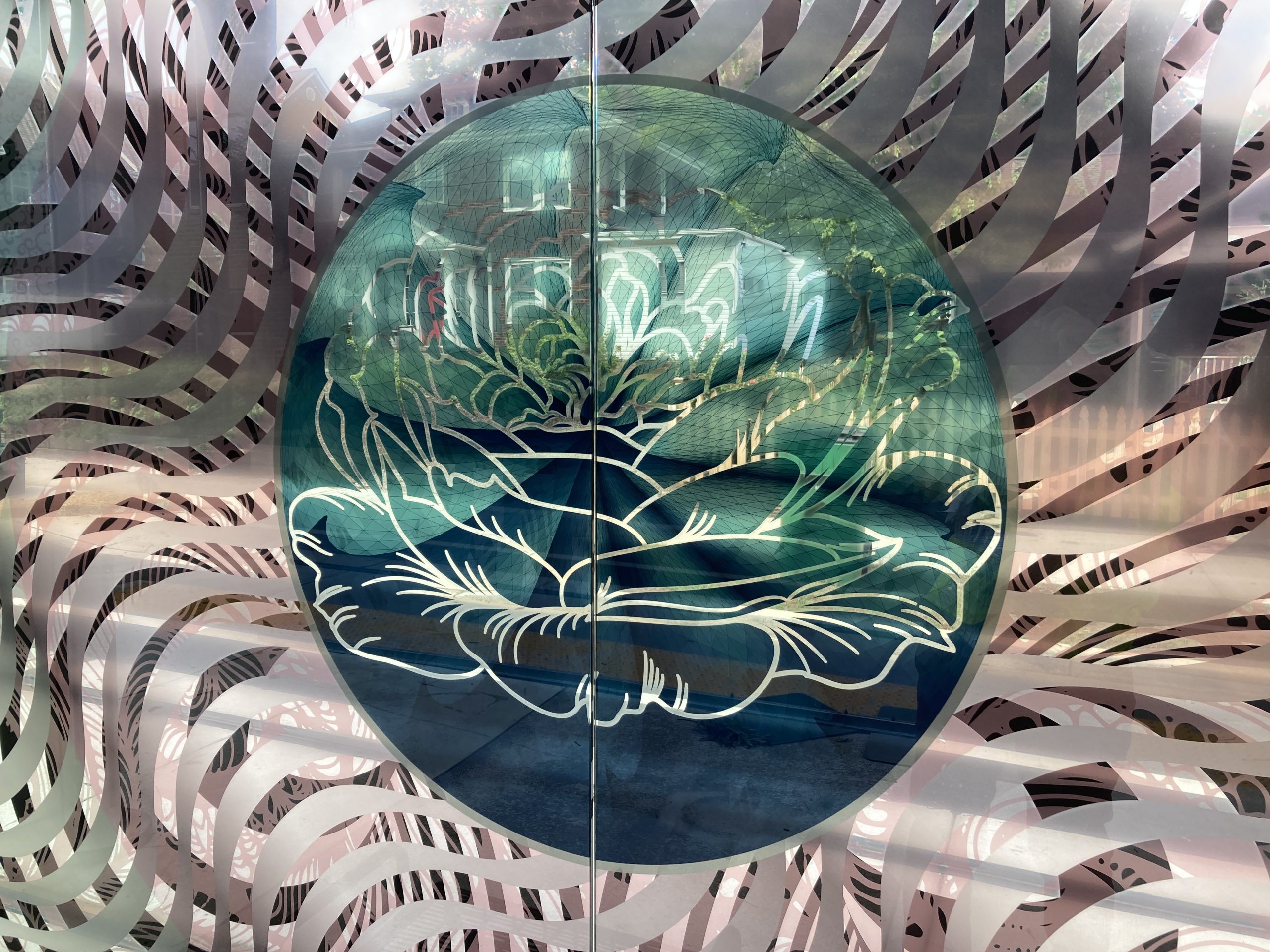 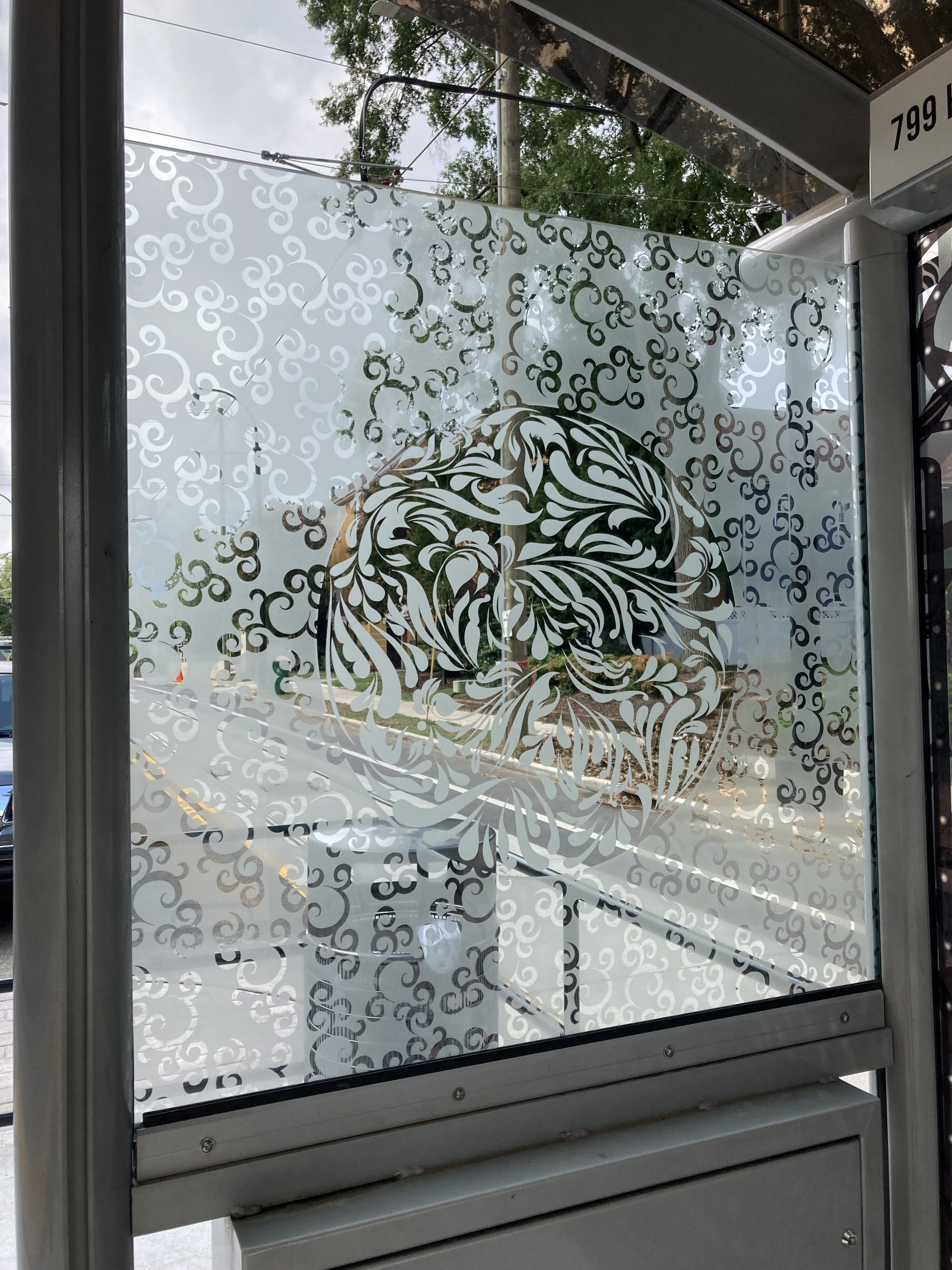 Laminated glass 6×13-ft, etched glass 42×41-in. Charlotte Area Transit System (CATS) Arts in Transit commissioned me to design 8 windscreens for 4 streetcar station shelters situated in the Elizabeth Area neighborhood close to downtown Charlotte. As of 8/19/2021 the project is still being installed. Additional images for 3 other stations will be uploaded soon.

The task was for me to research the history and tenor of the neighborhood and create designs that area residents could see related to the neighborhood. The integration of this task was critical to the overall design.

I was walked through the neighborhood, introduced to a local historian who had prepared a file on the area's history. I met 3 times with stakeholders/area residents over a period of 1.5 years. The first time I met with two of them, they were unhappy because they said CATS had waited too late to bring them into the project since my designs looked quite finished. That same evening they gathered a group of 25 to 30 residents so I could explain my thinking behind the designs as they stood, and get feedback/information from them of what they wanted to see. I asked them in 3 minutes to write the first 5 things that came to mind when they thought of the Elizabeth Area. They each read out their list and many were things like "friendly," "community-oriented," and I explained that I needed nouns rather than adverbs in order to visually summarize the idea. The only noun that kept coming up was "trees" because it is a leafy and wooded area. I proceeded to revise my designs by adding Art Deco "frames" around the designs and integrating trees into the design. I met with some of these people a final time, and they agreed that I had captured something about the neighborhood.

It was inspiring to work with such a passionate and committed group of residents/stakeholders. The Elizabeth Area is a historical area in a city that is very "new." It is filled with Arts & Crafts houses and it has the feeling of being wooded because of the tall (old) trees and plantings. They are protective of their neighborhood for good reason: Thirty-plus years ago they suffered a trauma at the hands of a City Hall intent on cutting wide roads through the area in order to facilitate the flow of traffic into downtown. The City proceeded to raze a beloved large historical rose garden containing more than one thousand species of roses; they did so by plowing it under, not even saving seeds or clippings, thus eradicating everything that was there. The residents are still mourning the loss of their rose garden and feel the wound as if it had just happened yesterday. They continue to fight City Hall, that recently proposed building a sports stadium in the area.