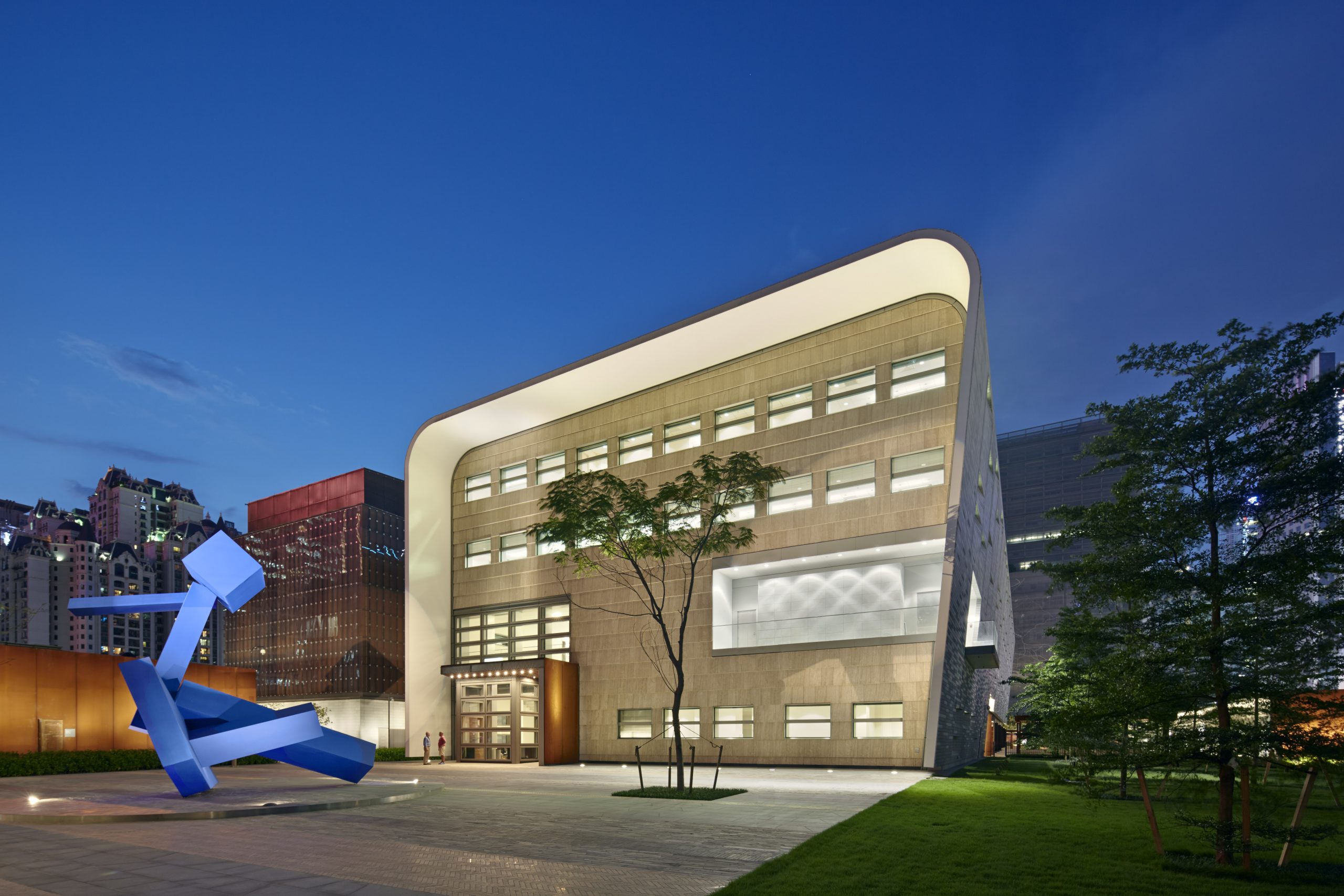 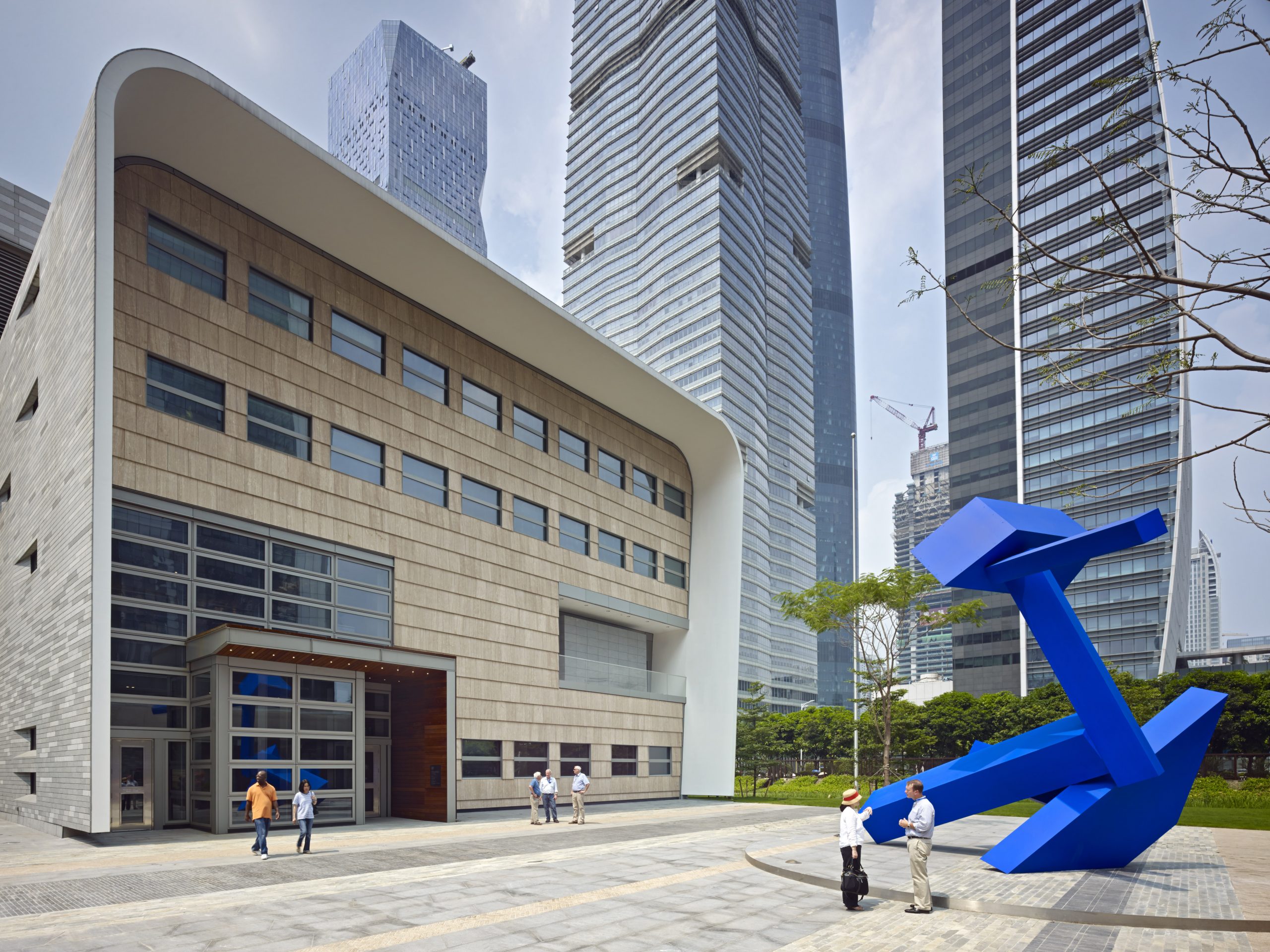 The Foundation for Art and Preservation in Embassies

The United States Consulate General in Guangzhou represents a new era in the design of diplomatic facilities. Representing American values while respecting Guangzhou’s physical and cultural landscape, the project consists of seven structures across the 7.5-acre site. The dominant structure is a four-story building that houses the primary diplomatic facilities of the Consulate General complex. This building’s exterior is sheathed in local stone and the soft edges of the building, including an outward cant to its eastern façade that deflects the prevailing cooling breeze onto the entry plaza, are all references to its particular place.

As a visible expression of the two countries’ cultures and shared interests, OBO’s Office of Art in Embassies (AIE) curated a permanent art collection for the Consulate. The objective in Guangzhou, as with all AIE projects, is to culturally connect the US to our host country and fully integrate the art with the building’s design.

Interior pieces include works by American contemporary artists. Doug Aitken pictorial lightboxes, such as “New Horizon” in the lobby, by mounting a photographic transparency onto a LED light box in the shape of a word or symbol, fusing text and images into a single presence. Energetically deconstructing the differences between the sign and signified; function and form, Aitken’s work succinctly symbolizes the complex relationship between architecture and art.

The south end of the Main Hall, Jennifer Steinkamp’s massive video projection, “Orbit,” transforms the modern hall into a magical space marked by trees and plants, whipped into motion by turbulent wind.

In the Immigrant Visa Hall, “Old Oak,” a video installation by Bill Viola, dominates the space with a projected image of a sprawling oak tree.

The collection includes photographs by Chinese photographers who played a seminal role in Chinese experimental photography.

The Foundation for Art and Preservation in Embassies (FAPE), a non-profit organization dedicated to donating American works of art to U.S. embassies and consulates contributed an outdoor sculpture, “Now,” by Joel Shapiro and a selection of his prints for the interior. The placement of “Now” was important to both SOM and the artist. Among the many sites discussed, the main entry court on the compound’s southeast corner was selected. The choice was based on the quality of light, the scale of the architectural edges and its high visibility both for arriving dignitaries and Chinese public who can view the work through the visually porous picket fence. SOM and the artist collaborated on questions of scale relative to the courtyard and the positioning and lighting of his piece using Shapiro’s wooden maquettes.

At the Consulate General in Guangzhou, the architecture and the art collection actively engage each other. The individual works of this extensive and unique collection not only function as separate yet cohesive pieces of art but they also complement the building’s structure and design creating a profound effect on the surrounding urban landscape, the Consulate staff and the visiting public.