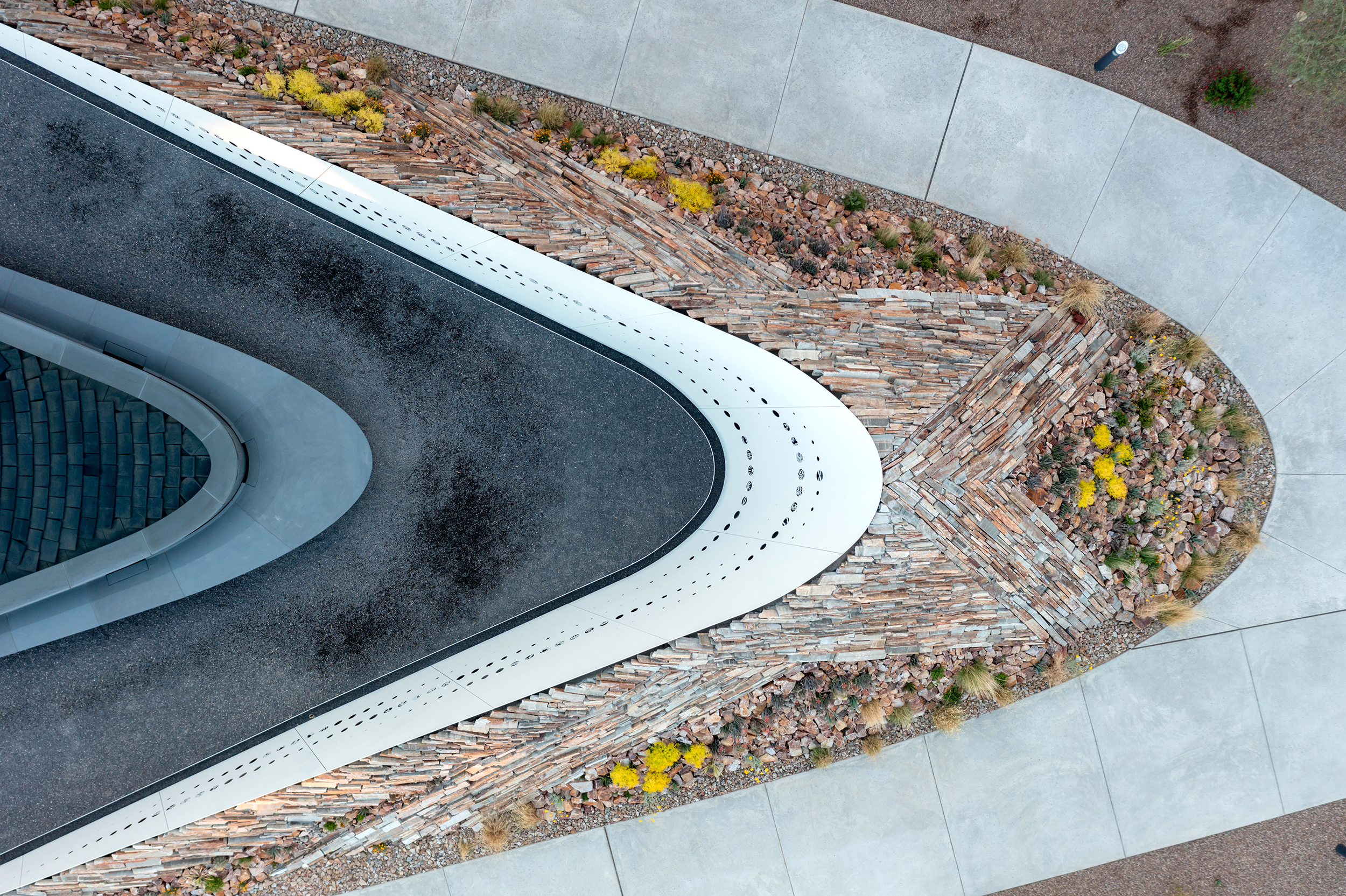 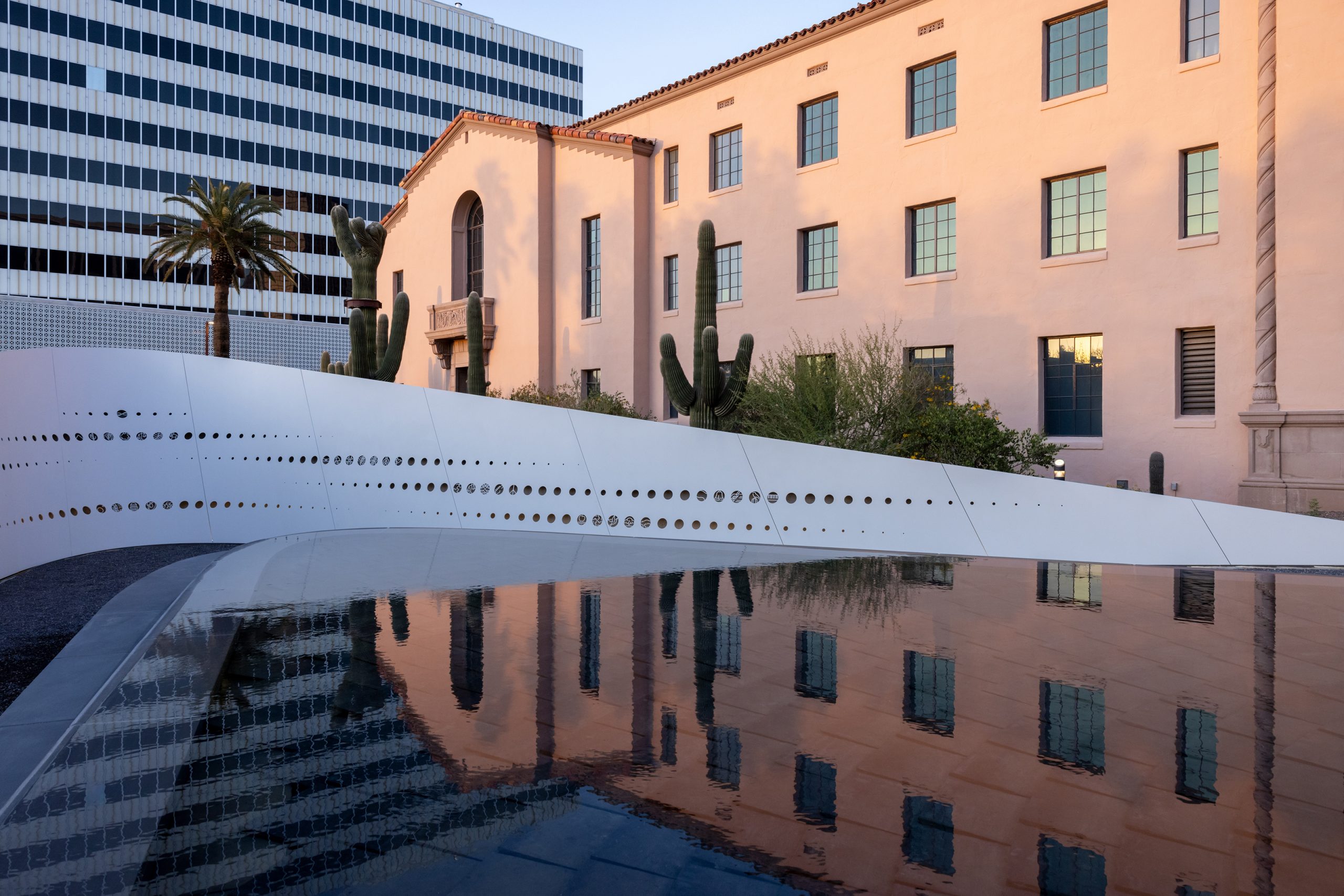 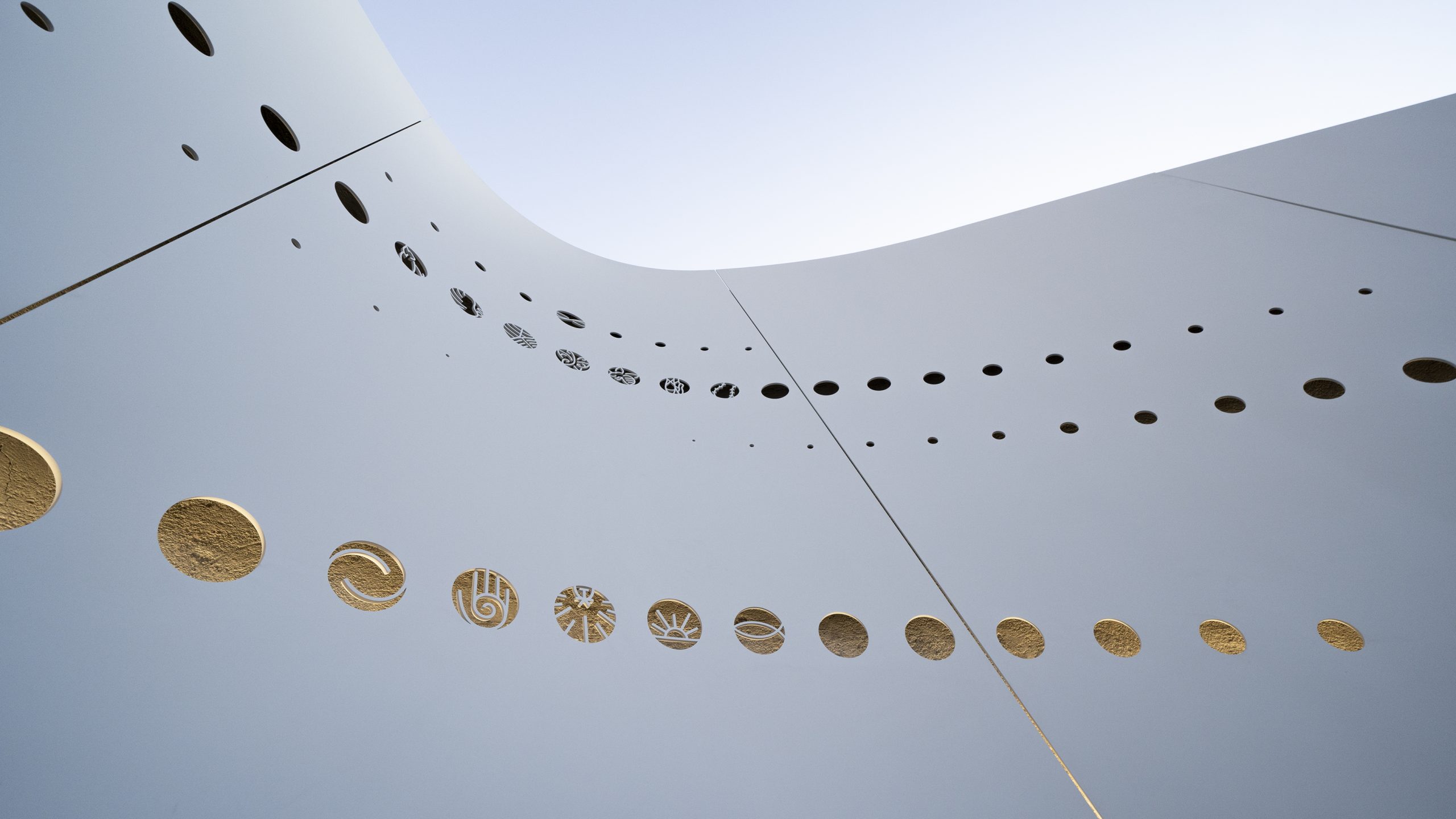 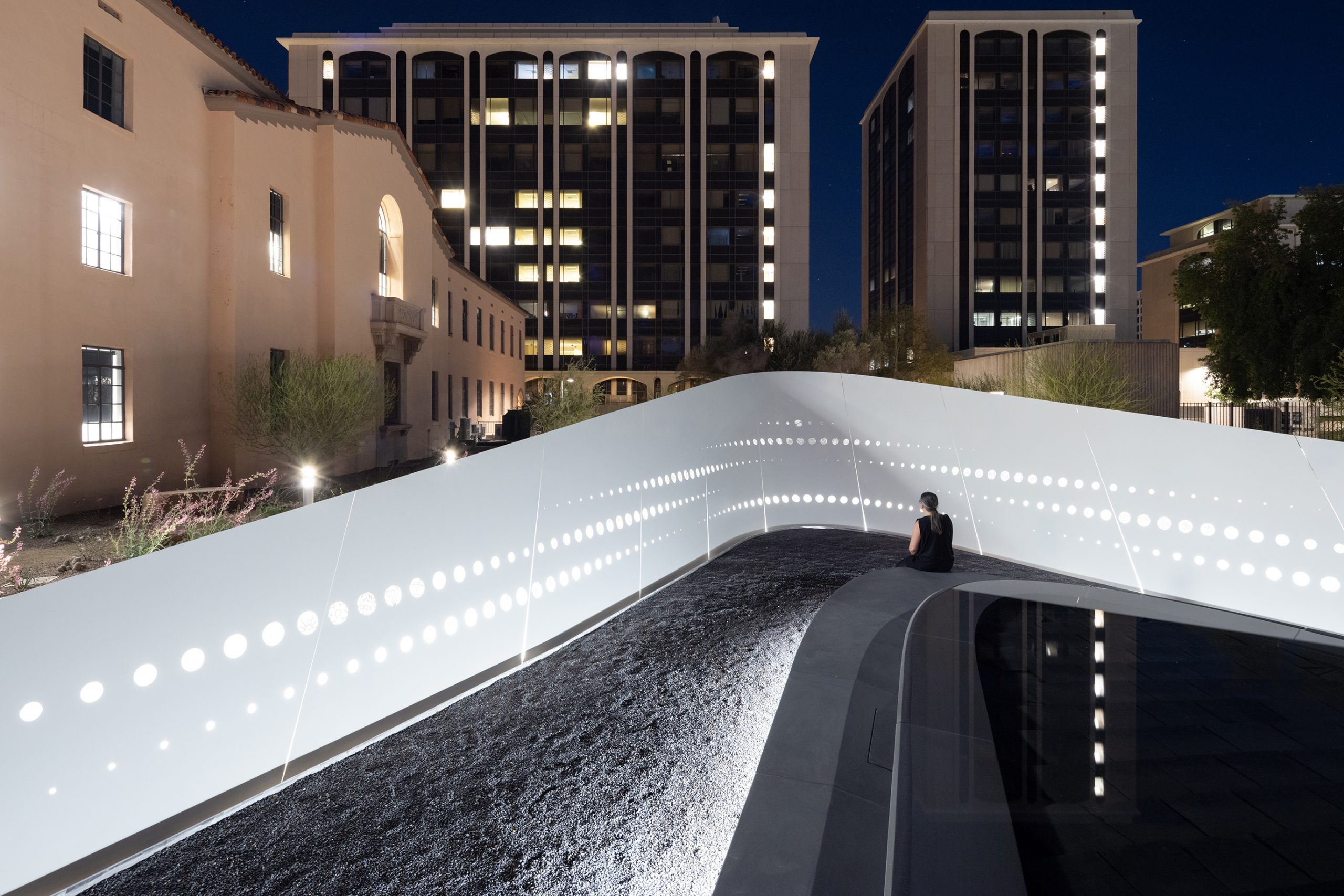 Tucson’s Embrace by Chee Salette and Rebeca Méndez. Ten years after the January 8, 2011 mass-shooting at former US Representative Gabby Giffords’ Congress on Your Corner event, a memorial honoring the victims, survivors, and first responders of the shooting opened in Tucson, Arizona. Carved into the landscape of downtown El Presidio Park, surrounded by themed gardens, and buttressed by an earthen berm, a powder coated pearlescent steel inner wall is etched with symbols that relate to the lives, interests, and values of the individuals present that day, as well as to the history of the land where the monument sits, the memorial thoughtfully reflects the salient personal and societal issues it engages. In 19 seconds a crazed gunman unleashed 33 bullets, leaving six dead and thirteen wounded, a city in mourning and a country in shock. This felt like an attack on democracy itself. Visual artist Rebeca Méndez, architect and landscape designer Tina Chee, and project architect Marc Salette collaborated masterfully to answer the community’s call for a place to mourn and remember, with an architectural embrace and a universal symbolic language, to create a common ground that transcends political posturing on gun violence, and celebrates the shared value of life.

For the competition phase in 2015, the design brief laid out the vision for “creating a place where citizens gather to reflect and remember and engage and exercise their most basic fundamental rights, where we honor those who gave their lives in pursuit of a better democracy, and a place where we celebrate today and embrace our future.”

Artwork and architecture were integrated from the start. The memorial design was conceived by the architect, landscape architect and artist in unison, and this synergy unanimously won both the jury and the public’s vote.

Situated in El Presidio Park—the location of over 6,000 years of Native, Spanish, Mexican and
American inhabitation, and now Tucson’s main civic space—the rising form of the earthen berm, covered with a woven pattern of stone and plants, can be interpreted as healing arms protecting the inner memorial.

As visitors descend into the memorial space, they enter an intimate, spiritual space surrounded by an array of voids and symbols pulsating like a heartbeat, cut out of shaped steel plates. The symbolic language is inspired by petroglyphs left millennia ago by the Hohokam in the Sonoran Desert. As memento, visitors can make a rubdown on paper of a symbol they identify as a shared value, and carry it forward into their life.

The story of the lives lost and people wounded is told on the inner walls via symbols that embody the values and interests held by each of the six people that died and the thirteen survivors. The symbols were determined by one-on-one interviews with those directly affected; family members of the slain and the ones that survived their wounds.

The design team was also informed by public meetings with community stakeholders like historians, the Pascua Yaqui, Apache and Tohono O’odham tribes, first responders, a high school class, and the late Richard Elias, a County Supervisor who was passionate about the history of Tucson, warts and all.

As the story of January 8th was taking shape, it became meaningful that this tragedy be framed in the larger context of Tucson’s past, one of conquest, violence and survival. The Memorial’s location at the birthplace of the city provided the perfect setting to represent the history of Southern Arizona. This history of hardship but also resilience looks at January 8th with a wider lens, transcending the tragic day and making the Memorial a monument to the region and diversity of its people. It is illustrated through thirty-two symbols displayed on a circle of lanterns lighting the path around the Memorial.

Each of the people injured or slain in the attack, has a ‘constellation, made up of 33 holes representing the voids left by each bullet fired. As the sun moves across the inner wall, the symbol cutouts and their shadows overlap in layers of meaning. At night, they glow softly, evoking the candlelight vigils following the tragedy. One symbol for Gabe Zimmerman—the director of community outreach for Gabby Giffords—is the local bighorn sheep, whose balance and sure-footedness he mimicked as defender in soccer and as a social worker protecting children. When the shots rang out Gabe ran toward the bullets, never questioning to give his life to protect his colleagues and constituents. He is the first congressional aide ever to die in the line of duty. Among the symbols for nine-year-old Christina-Taylor Green are a butterfly (the last drawing she made at school) and a bobcat for the nickname her father gave her. Some of the survivors were quick to point out that they didn’t want the Memorial to be about them, but to be about people like them, who went about their day, for it to suddenly be devastatingly interrupted by senseless gun violence. In today’s America, this could happen to anyone, everywhere. This strengthened the design choice for the use of a symbolic language common to