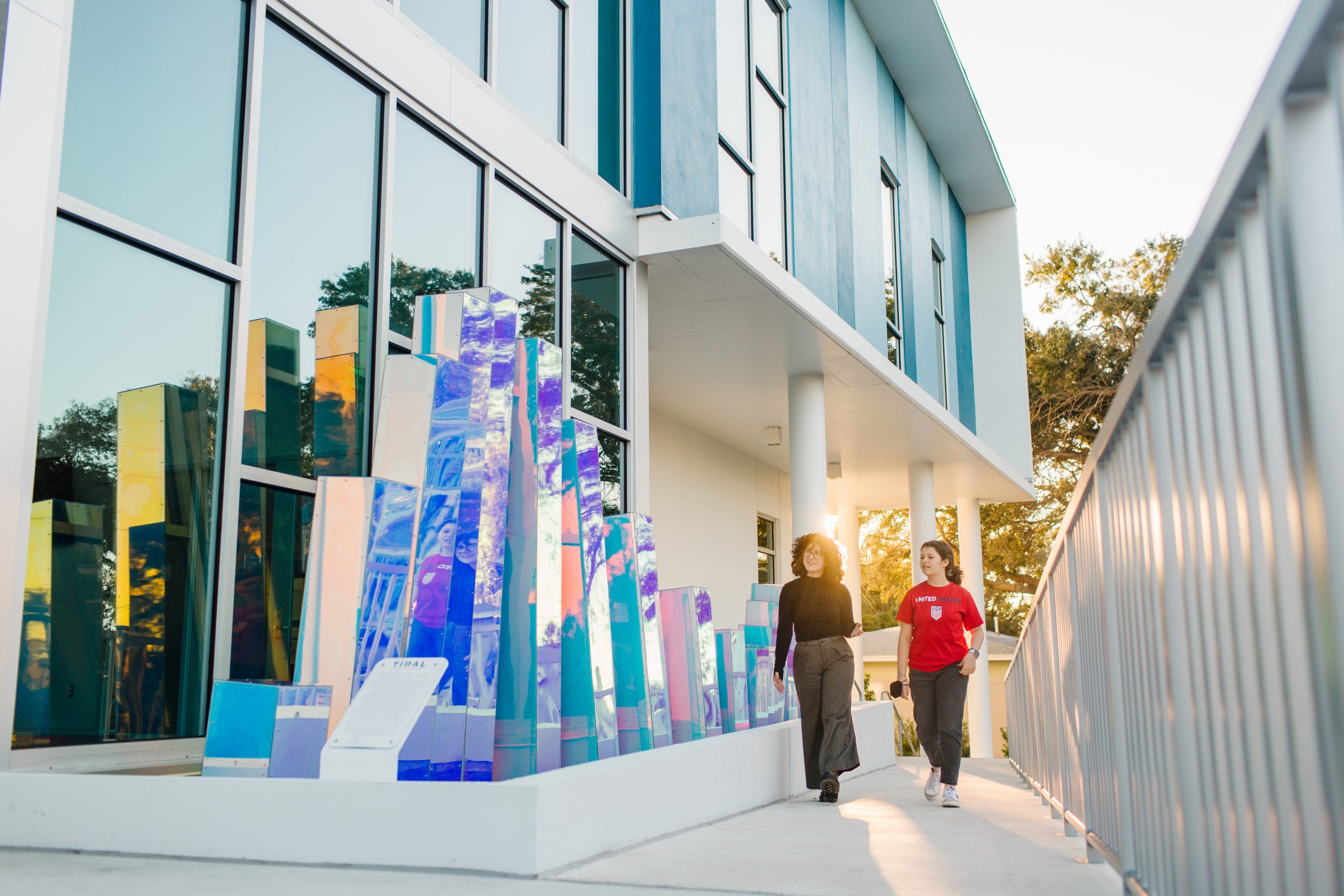 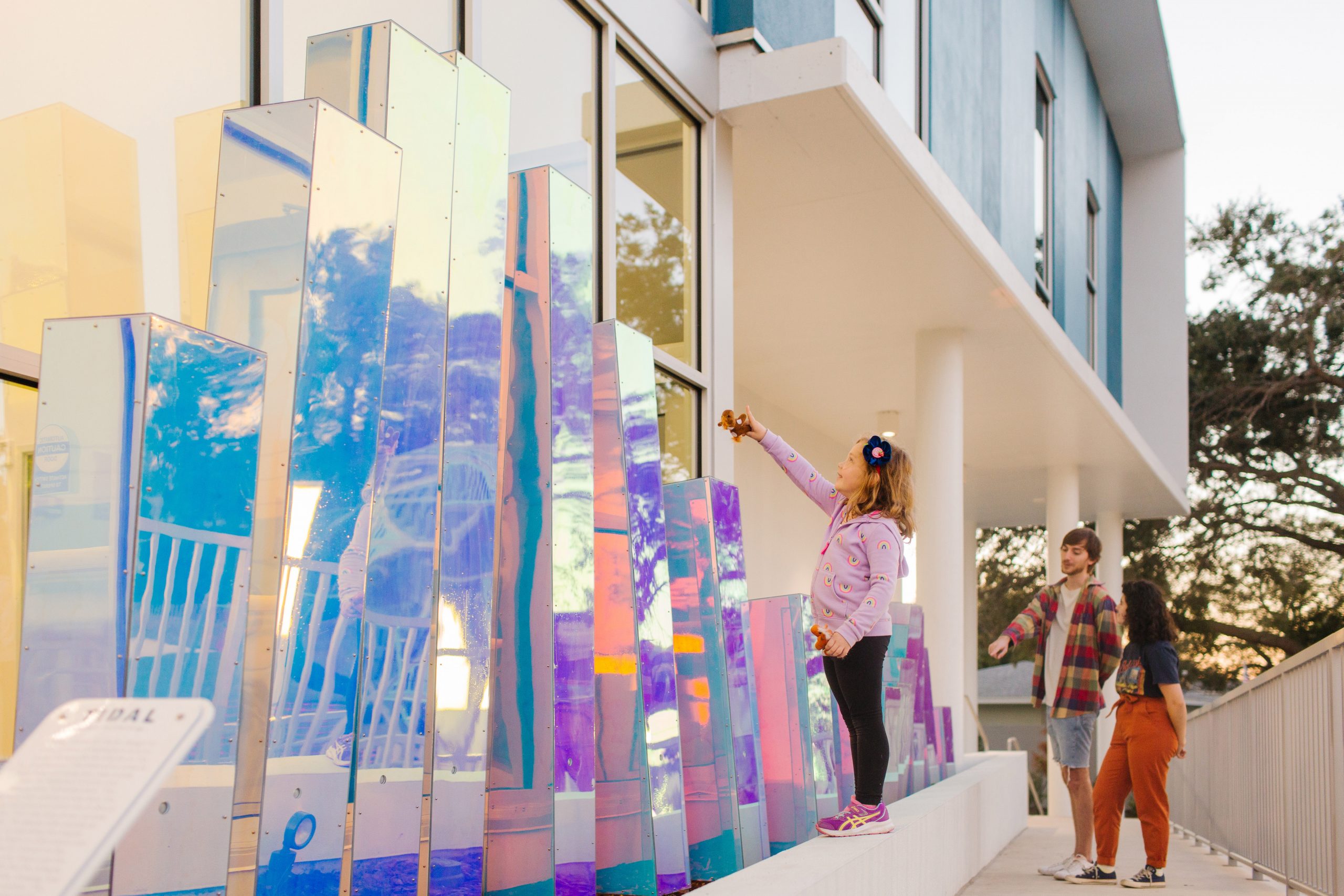 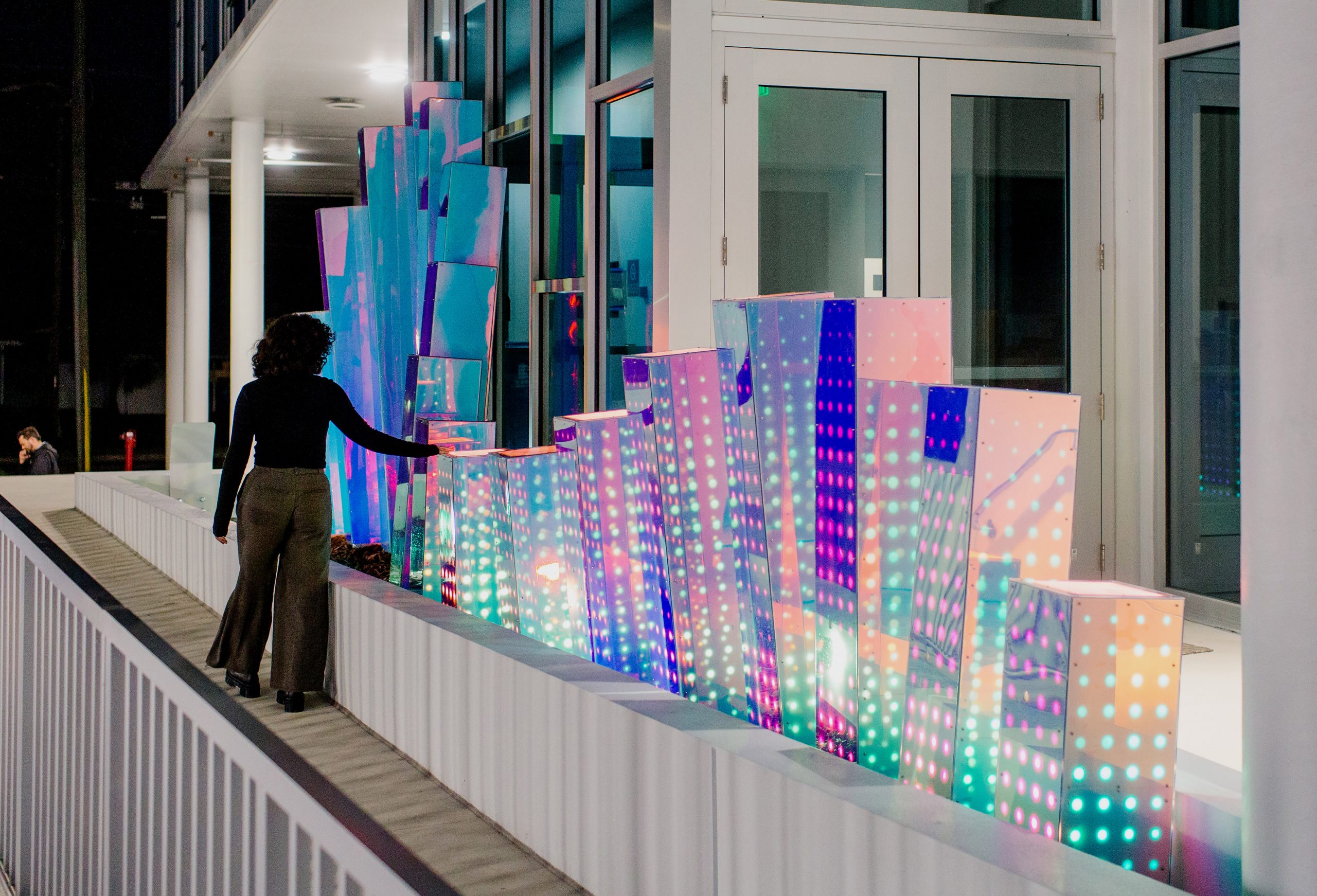 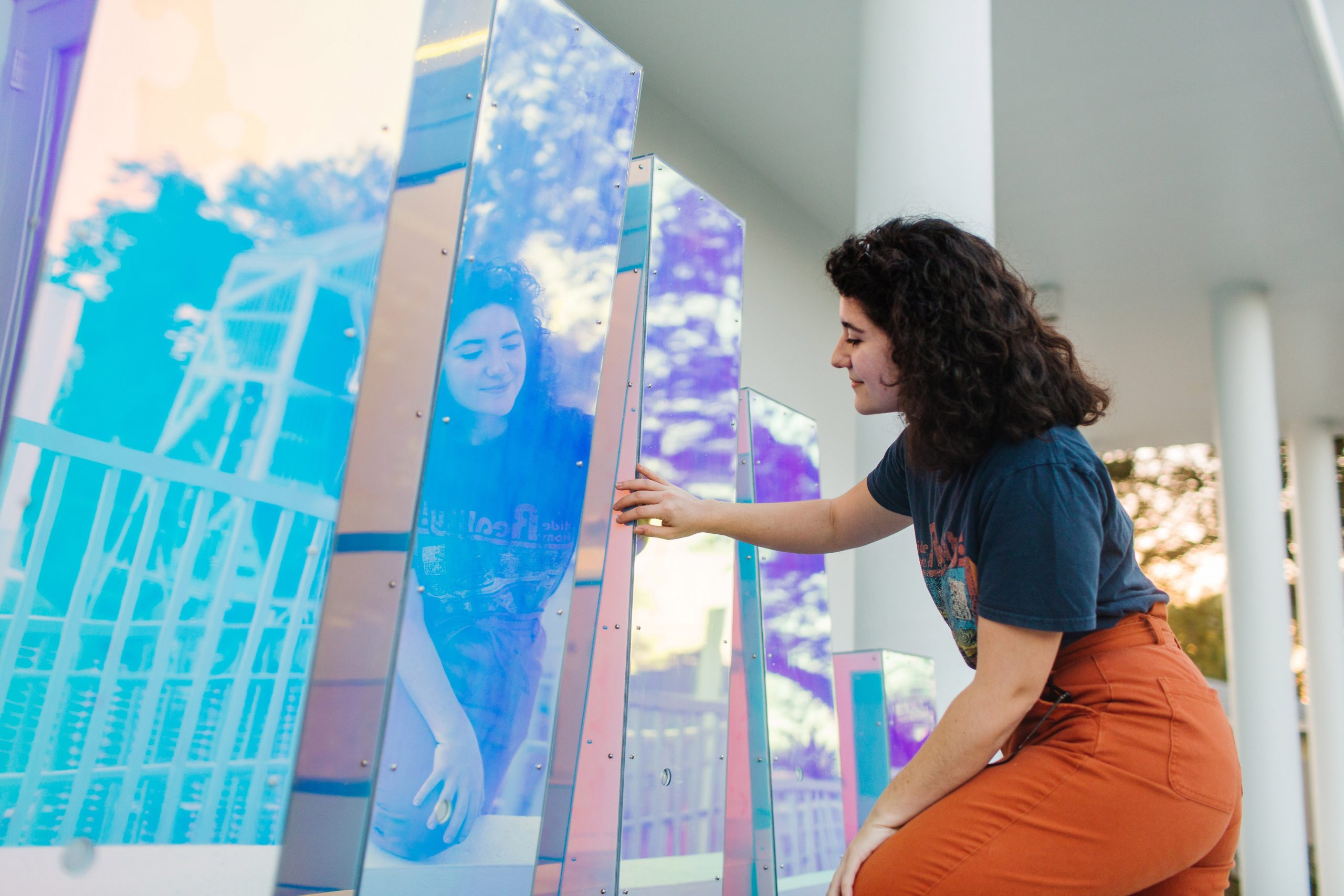 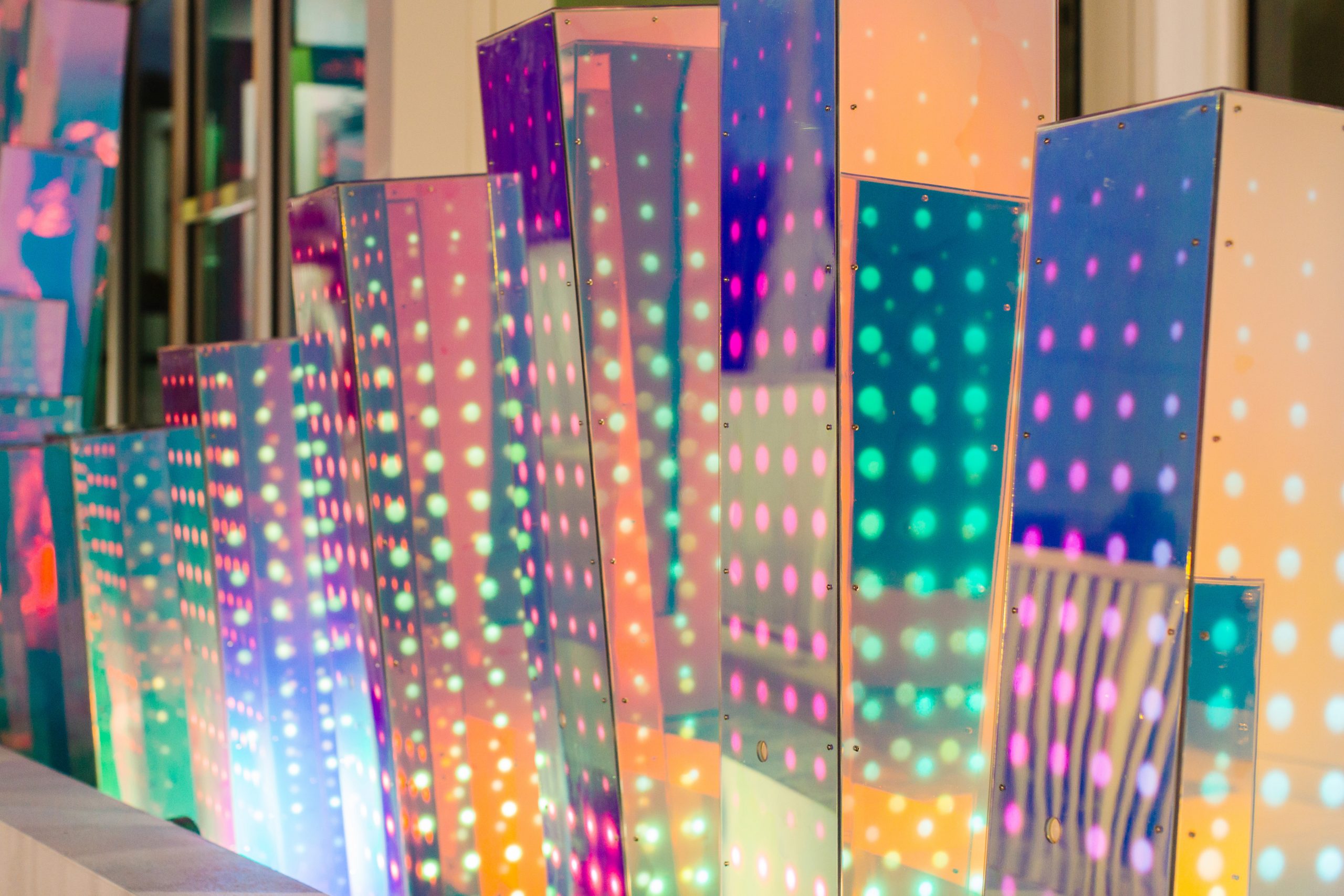 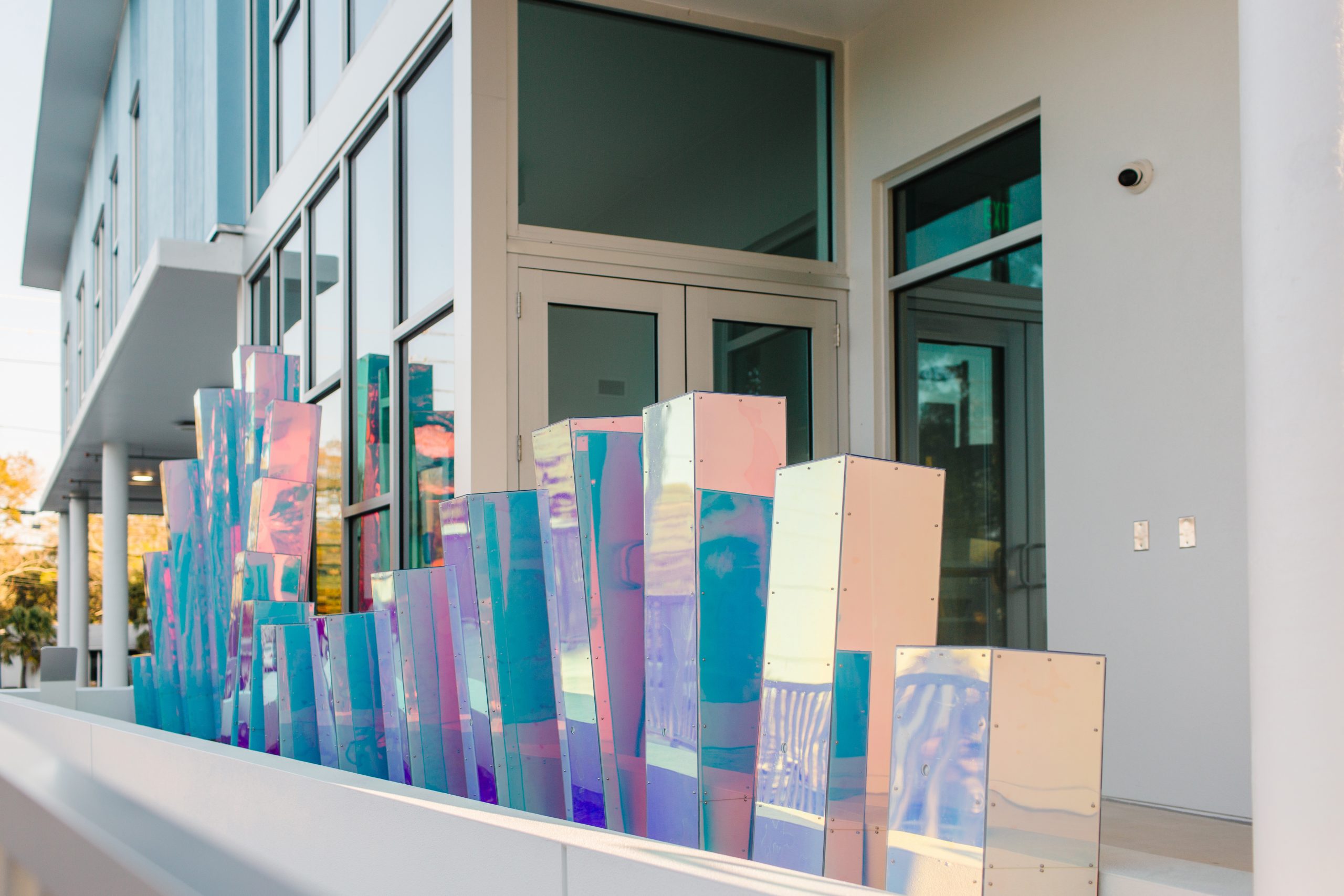 TIDAL extends nearly 35’ long at the entryway to a new recreation center in St. Petersburg, FL. The design of the form was generated using data from the NOAA that shows the projected sea-level rise of nine feet relative to the resilient goal of a two-foot rise in the next eighty years. TIDAL’s design utilizes this data from the NOAA along with average tidal patterns of the area to form a series of flowing pillars that reflect and refract the surrounding context. These pillars act similar to a pier’s pillars by becoming indicators of tidal change data and water rise over time. As people walk by each unit, they illuminate from within, revealing perforated data points generated from the average local tidal patterns. The pillars stay illuminated briefly and then fade away, acting similar to the ocean watermarks left behind on the pillars as the tides change over time. This responsive nature of the work highlights how our actions can create an immediate reaction. TIDAL is made of recyclable polycarbonate and aluminum that was fabricated locally to help mitigate the work’s carbon footprint. The work contains low-powered lighting and sits within a permeable planter bed to help with rainwater collection.

Effects of climate change are being felt worldwide, and the Shore Acres community in St. Petersburg, FL, is no exception to this. The Shore Acres neighborhood is already experiencing significant impacts of sea-level rise and is at an even higher risk of its effects as time progresses. The National Oceanic and Atmospheric Administration predict that by 2100 if we stay on our current trajectory, the area’s sea rise could reach over 9ft. This expected rise is nearly five times what the average sea level rise should be within that time frame, putting the neighborhood at risk. Often the way this information is presented makes climate change a challenging topic for people to want to hear or discuss because it is usually talked about in a way that makes people feel uncomfortable or overwhelmed. This lack of conversation around the issue is a problem when trying to educate others on the future impact of climate change and how to become more resilient. TIDAL was designed by The Urban Conga as an engaging art installation that utilizes key data points from the NOAA to spark an open conversation around climate change through play. The design uses play methodologies as a critical tool to break down these barriers and create an opportunity for reflection and discussion.

The Urban Conga studio was founded in Florida, and the majority of their team grew up on the Florida coast, where they experienced firsthand the impacts of sea-level rise. When they received the opportunity to work with the City of St. Petersburg to create a piece of art for the Shore Acres Recreation Center's entryway, they immediately knew the direction they wanted to go with the project. With the Shore Acres neighborhood being in one of the highest impacted areas of sea-level rise in Florida, the city and local stakeholders were immediately on board. TIDAL was then developed to utilize play methodologies within the design as a tool to spark an open dialogue around climate change that could become a catalyst in the conversation toward a more resilient future for our planet. This project showcases how play can be utilized in design through non-traditional ways to spark an impact within our built environment.