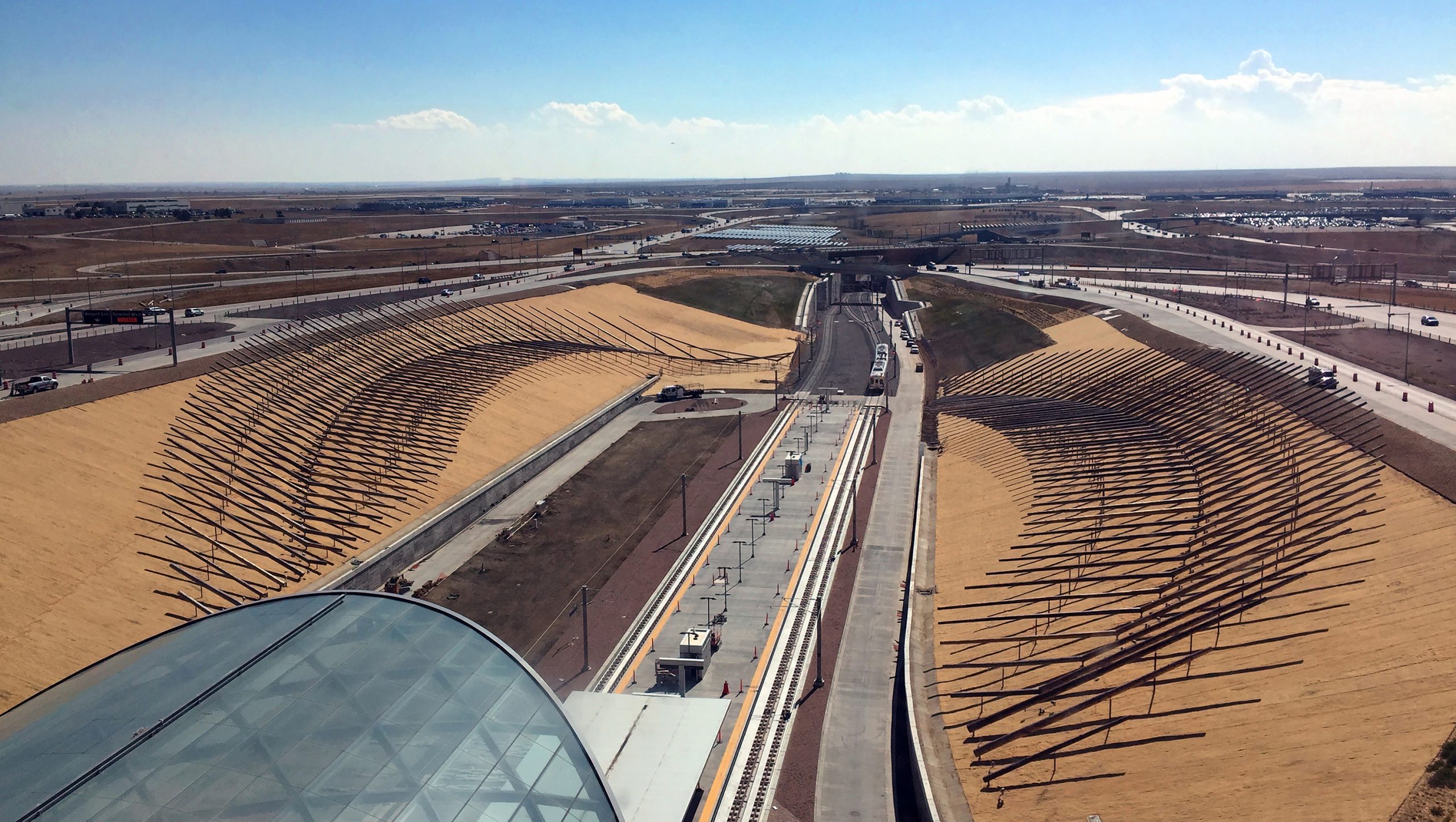 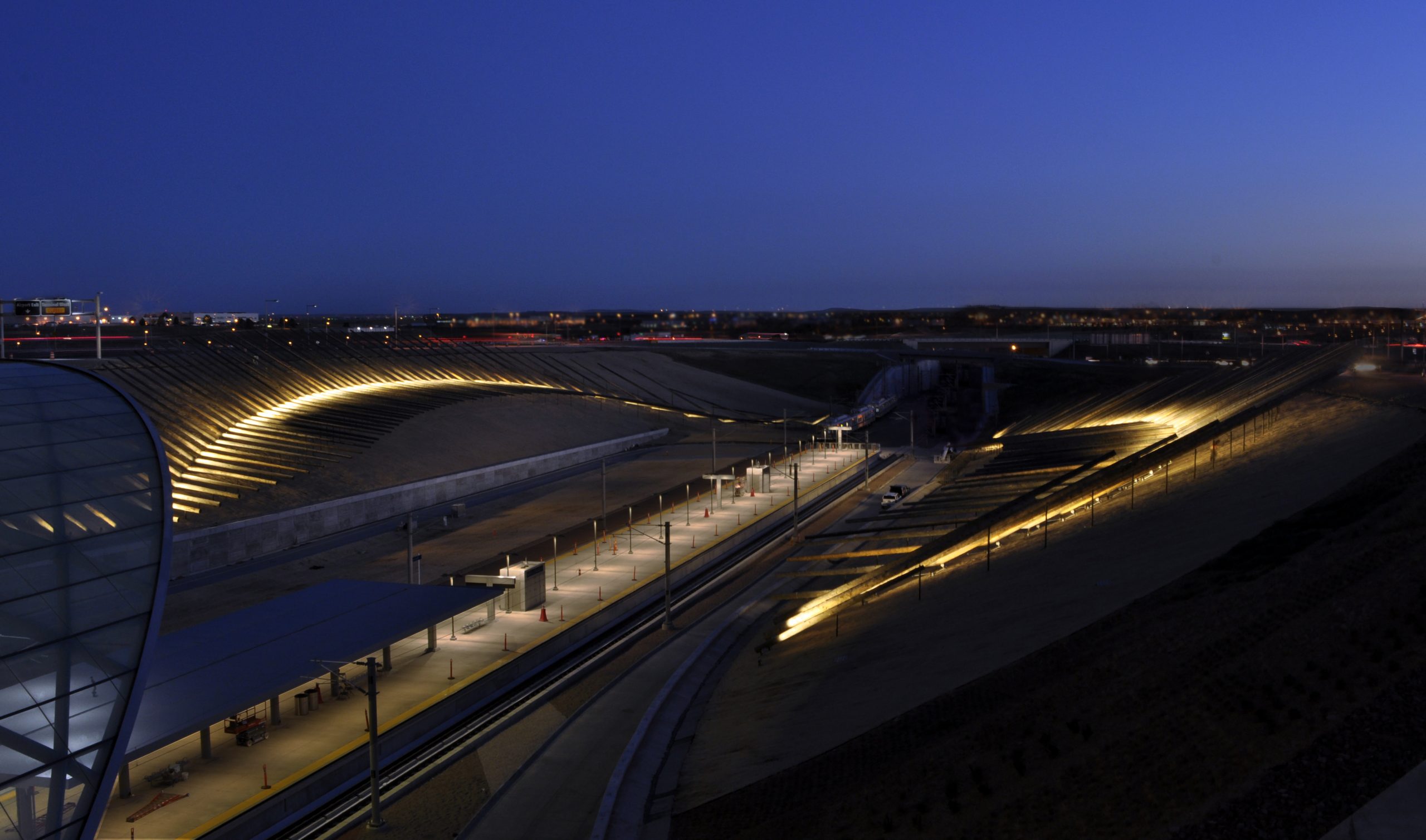 Shadow Array is an expansive timber sculpture conceived by Patrick Marold and commissioned by the City and County of Denver as an anchor artwork at the new Hotel and Transit Center for the Denver International Airport.
The artwork consists of 236 beetle-kill spruce logs from Colorado, each averaging between sixty and seventy-five feet in length. Spanning over seven acres, this sculpture ruminatively activates the valley it is located within through contour and shadows, and rhythmic illumination throughout the course of the night. The transitioning light is created through strategically placed lighting, designed by the artist to compliment the daylight experience.

Marold's design for this sculptural integration accounted for the spatial relationships of the site and the perspectives of the audience, as the sculptural experience varies greatly with the viewer's proximity to the work. Solar exposure of this valley and it's overwhelming scale were both major components that informed the artists approach in creating an integral work of art that compliments the design of the site.
This installation is situated on mirroring hillsides that embrace the new rail line and pedestrian platform. The new commuter train runs through the composition as it approaches its final stop, enhancing a sense of the vastness and the calculated placement for each sizable log.
The Shadow Array also serves as the immediate focal point for users of the Civic Plaza, an open-air civic space that bridges the airport to an adjoining hotel. The installation tapers into the horizon, further augmenting the public's perspective of this space.
Experiencing the work from high within the hotel or perhaps even from the air, the site becomes gracefully dwarfed and multiple perspectives offer a range of visual experiences that continually hourly and seasonally. The spruce logs reinforce the regional sense of place while collectively defining the viewers physical orientation.

The Shadow Array was conceived of before the site was physically realized, and the artist worked closely with the design team lead by Gensler Architects to integrate the sculptural concept into the landscape, hotel and plaza environment, and the roadway and railway design. From the onset, this was a project that required continual coordination with the airport, engineers, transit officials and the construction team.
The fabrication and installation of the Shadow Array was primarily executed by Patrick Marold Studios, and Rocky Mountain Timber Products provided the beetle-kill spruce logs directly from the Rio Grande National Forest in Colorado. KL&A architects provided structural engineering and consultation.
The lighting component was also designed by Patrick Marold Studios, and engineered by Beaudin Ganze Consulting Engineers, and installed by Kennedy Electric Inc.
Close coordination was facilitated by Saunders Construction, as well as the City and County of Denver and Denver International Airport.

The production of Shadow Array was supported by a local community of artists and craftsmen/craftswomen employed by Patrick Marold Studios. This was a grassroots project made possible by people dedicated to the art and the experience of making it together. From the point of hand peeling and preparing the logs to welding and installing all the structural steel and eventually setting the logs, a team of 20 worked to realize this monumental sculptural installation.