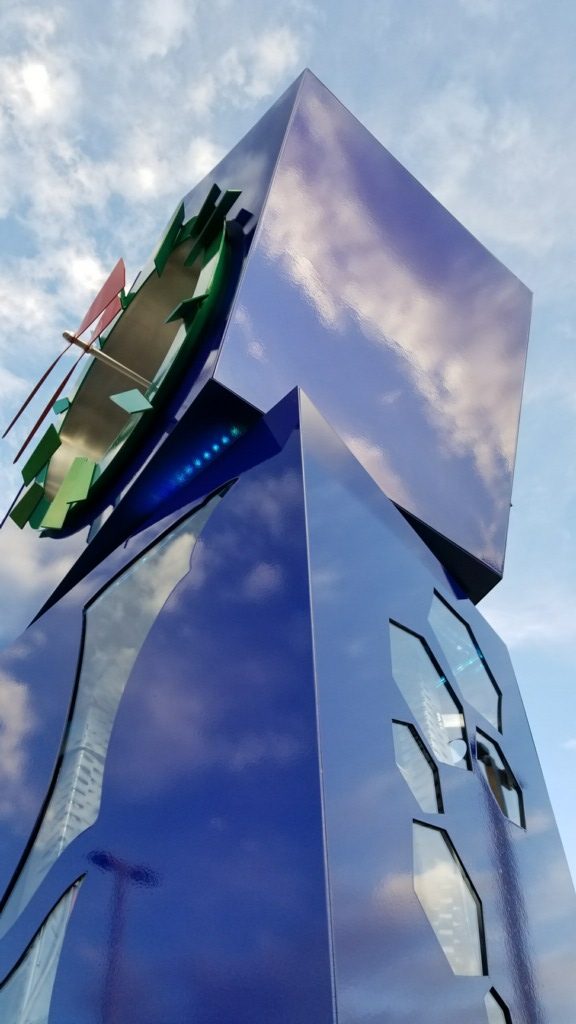 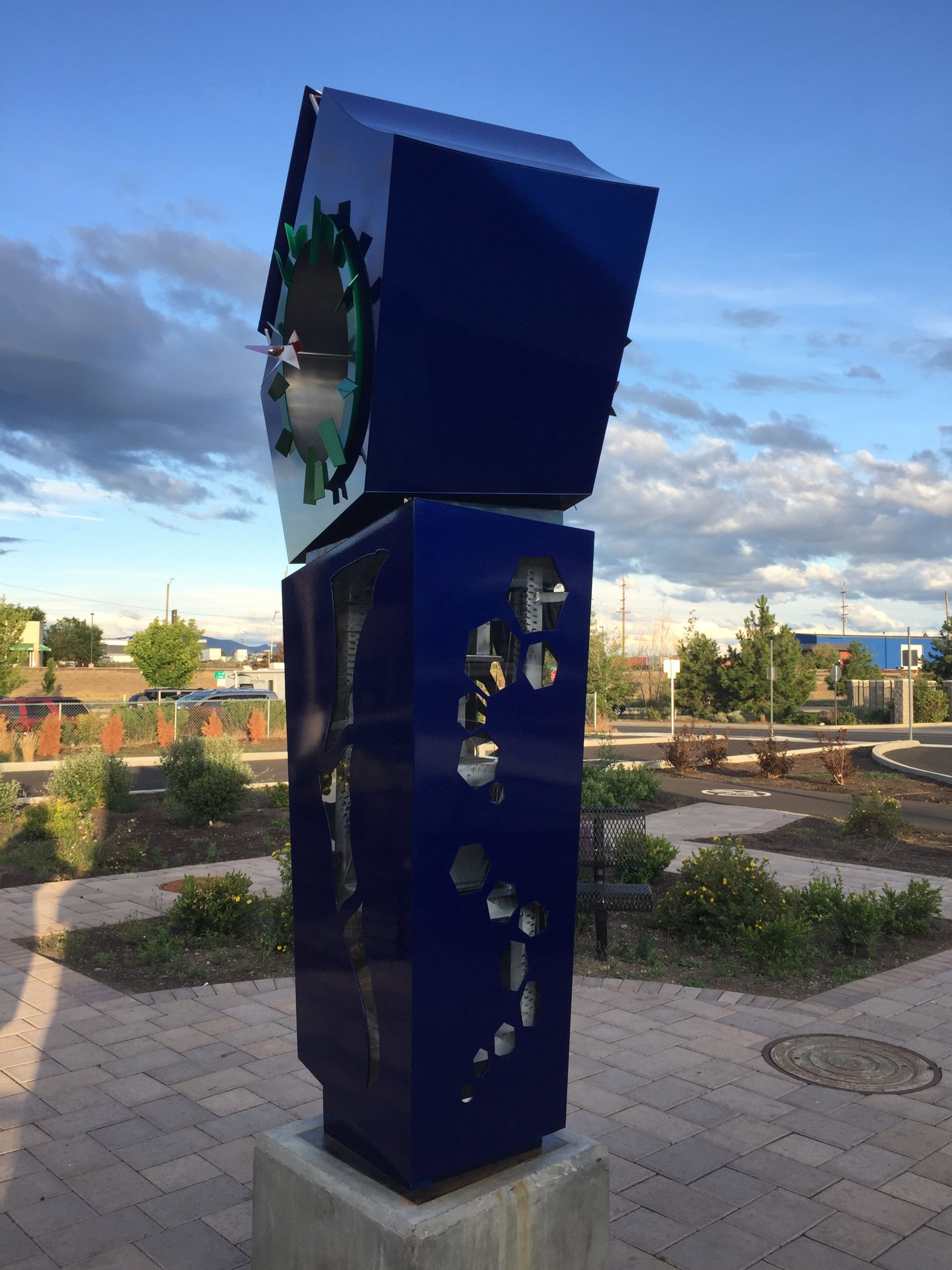 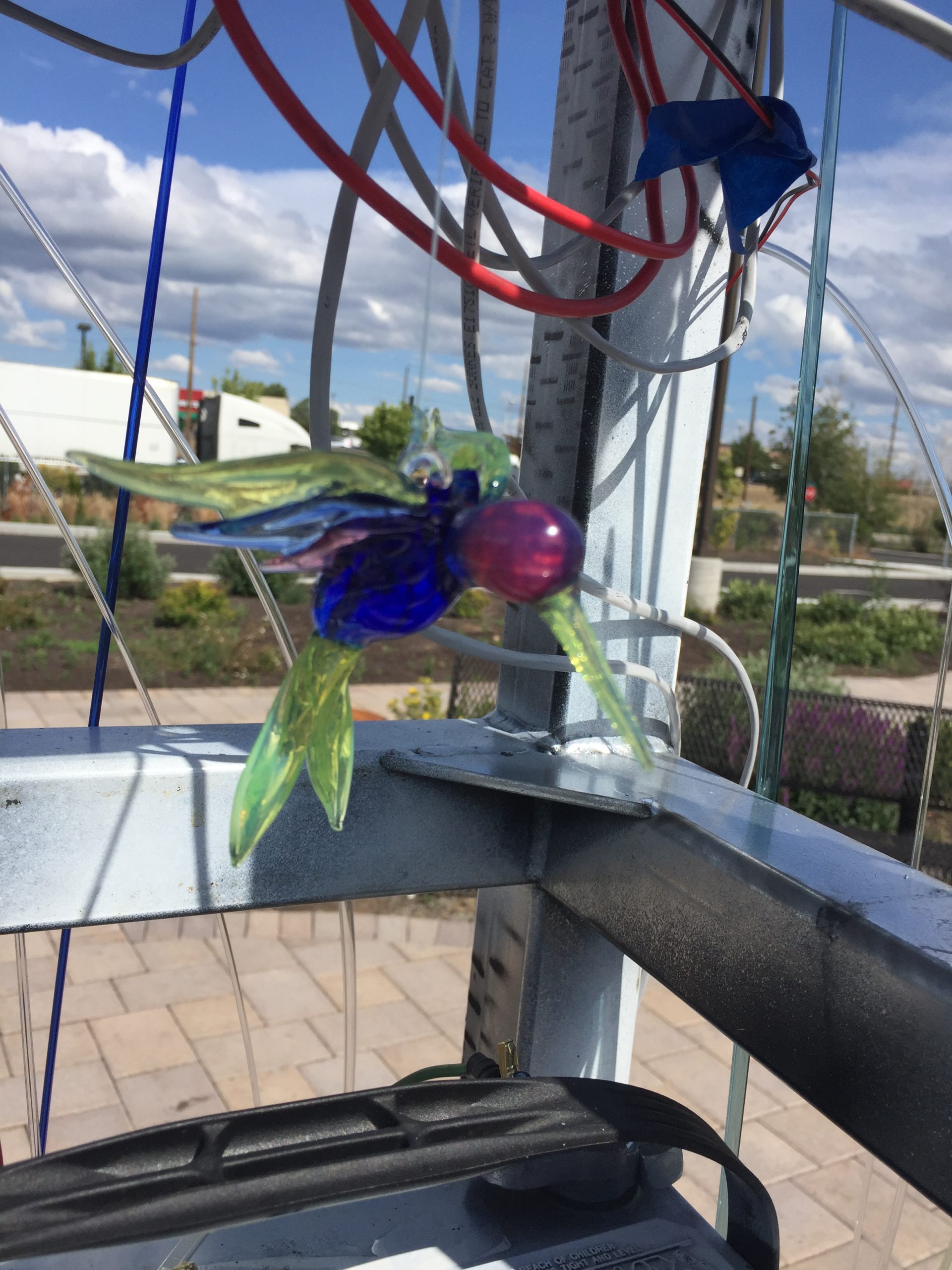 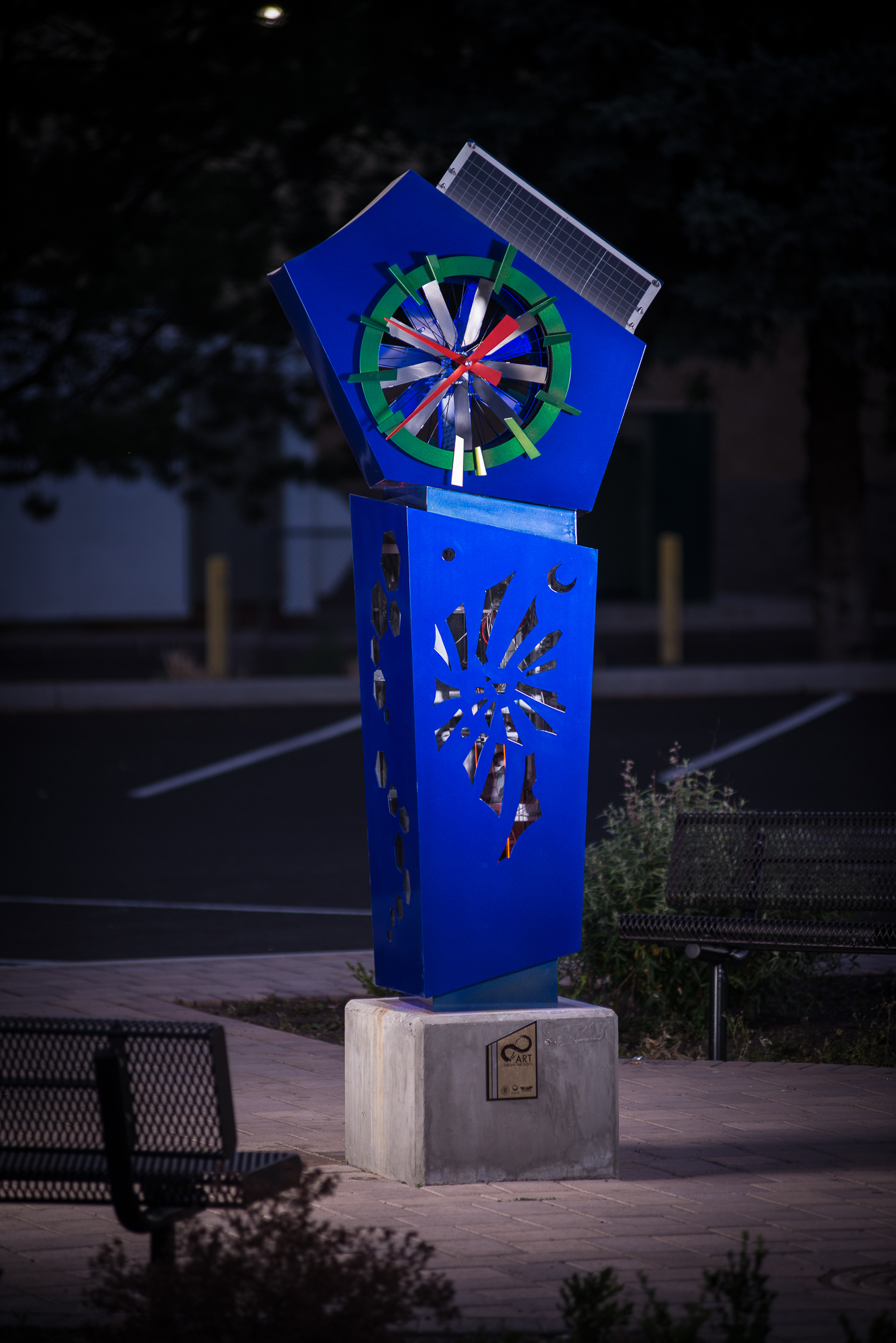 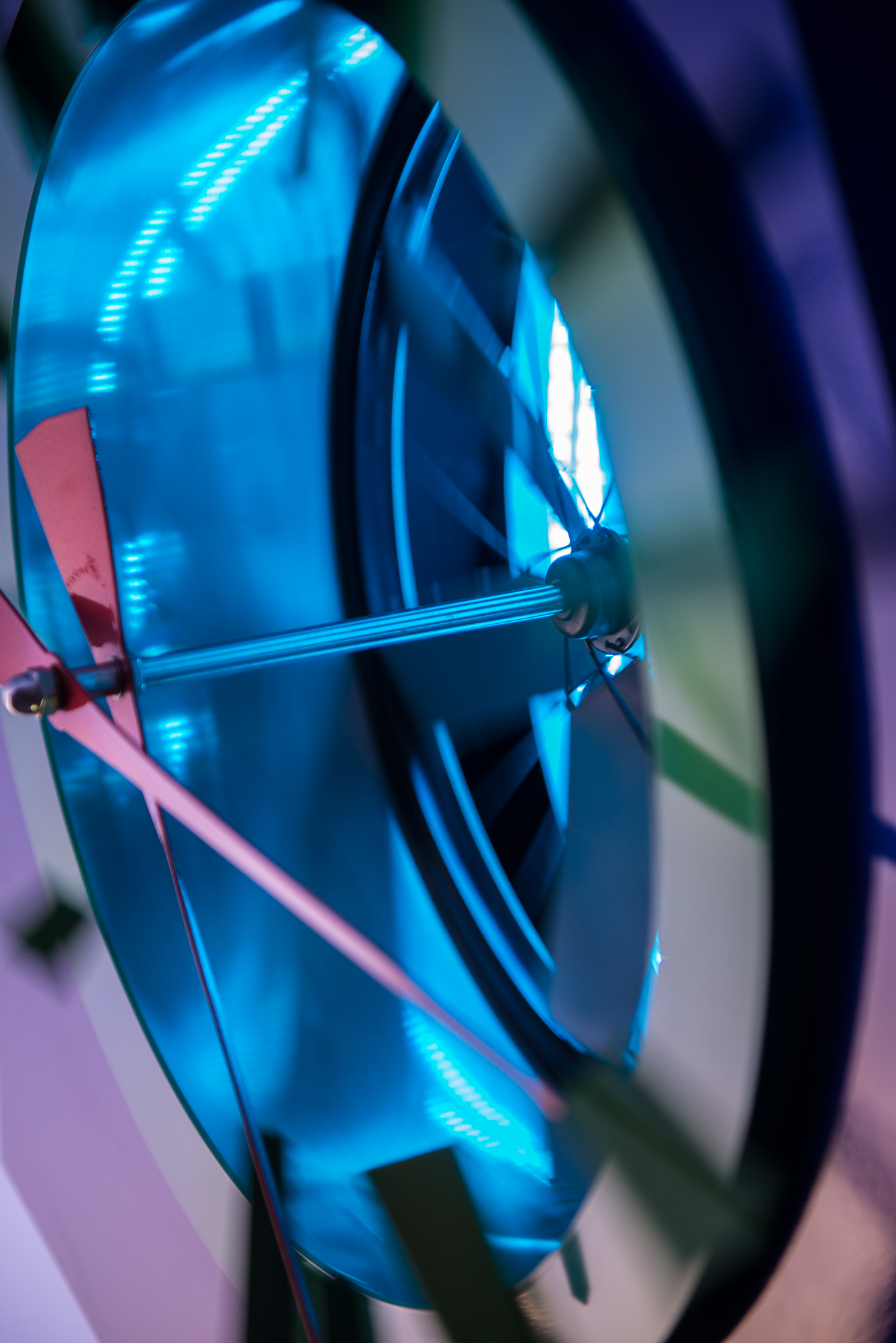 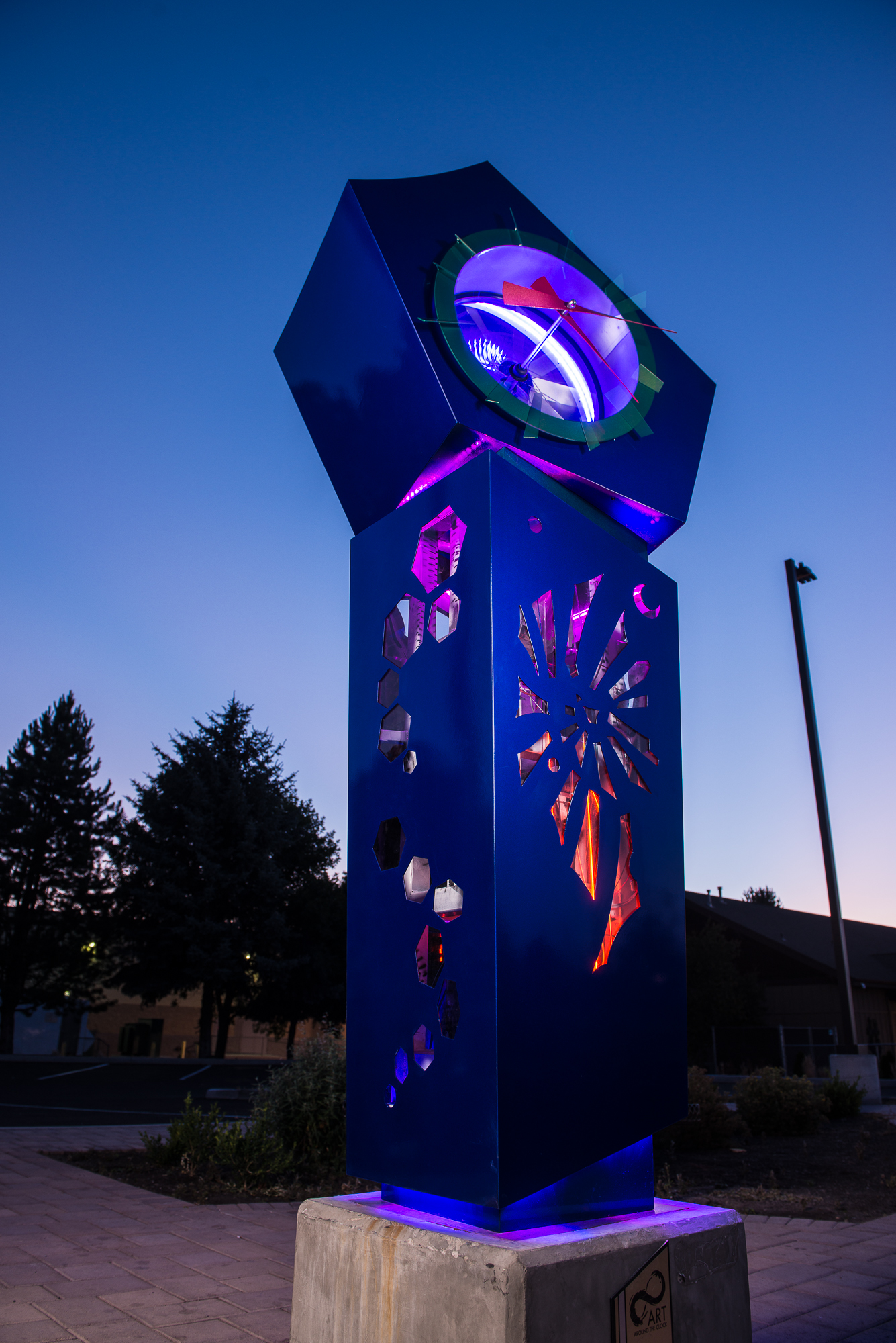 “The Relativity clock” is a multimedia sculpture created by Jesse Pemberton, Miguel Edwards, Rick Zar, James Myers and Ginger Sanders that incorporates electronically inter-activated LEDs and wireless neon with faceted reflective surfaces.
Installed at the Main Transit Hub of Redmond Oregon, the City hosts this sculpture in the station's “Waiting Garden”. Viewers will activate combinations of colored light sequences via three motion sensor commands. The internal logic and power components are viewable through transparent portals.
Powered by a 50 Watt solar panel, Relativity Clock will charge its internal electronics throughout each day for the duration of the 2 year exhibition.

Redmond is a small city that started integrating public art around 2006 with RCAPP. They staffed the project for long term mission goals and the council has succeeded. Their scale and scope to grow is reasonable and based on the public's response while treating artists with great respect and logistical assistance.
My main goal was to respond with a compelling concept, tight design-work and small expense budget of around $2000.00 for a 2-year exhibition. As the project evolved the second goal of safety and durability became very important as we considered how the public space and weather conditions were bound to prove formidable. The challenge was to compromise very little of our stylized artwork for protective bulk while also integrating the additional electronic features on a fixed power budget. In the end, I’d say our collective goal was pushing the combined technical and artistic skills of the group to the maximum. We are now a new team!
If we posed any intrigue for the viewers’ interest and conveyed an opportunity to then observe and be observed as a part of the art, then I’d say this Clock was Relatively successful.

In April of 2019, I was invited to submit a proposal for "Art Around the Clock" a 2-year public exhibition of 15 selected artists for competition. Application Deadline Day: I reached out to fellow artist and CODAworx member Miguel Edwards whom I know through the Central Oregon Metal Arts Guild. We have similar styles in our aesthetics and had showed a few times together as metal sculptors throughout Bend, OR. I literally called Miguel at 2pm fully inspired, pitched the idea, sent over a sketch and by 4:55pm I had our bios with completed application and 3D-CAD models plus notated hand drawings for Redmond's art jury to review. Miguel is an impressive artist himself so I was delightfully moved that within 22 hrs. later he calls me to say "Check your email WE'RE IN !!" I believe at that point, we both knew this would be a fantastic collaboration, followed by several coffee table sketching sessions, fundamental discussions of 'relativity' and all the potential visual ideas began to flow. Shortly thereafter, Miguel suggested we invite (2) fellow Oregon artists; Rick Zar (wireless neon) & James Myers (LED, programming, logic) from Seattle.

Lastly on collaboration, by total coincidence Ginger Livingston Sanders (blown glass/photography) lives near Miguel's studio where we mostly worked. Ginger provided a single custom glass hummingbird that hangs at the center of our sculpture representing all things of speed & relativity in the natural world. Our local businesses were hugely helpful in both minor and major product donations, as well as companies like 3M and Valspar/House of Kolor, their products and technical knowledge was imperative for our willingness to experiment and test just as artists do!