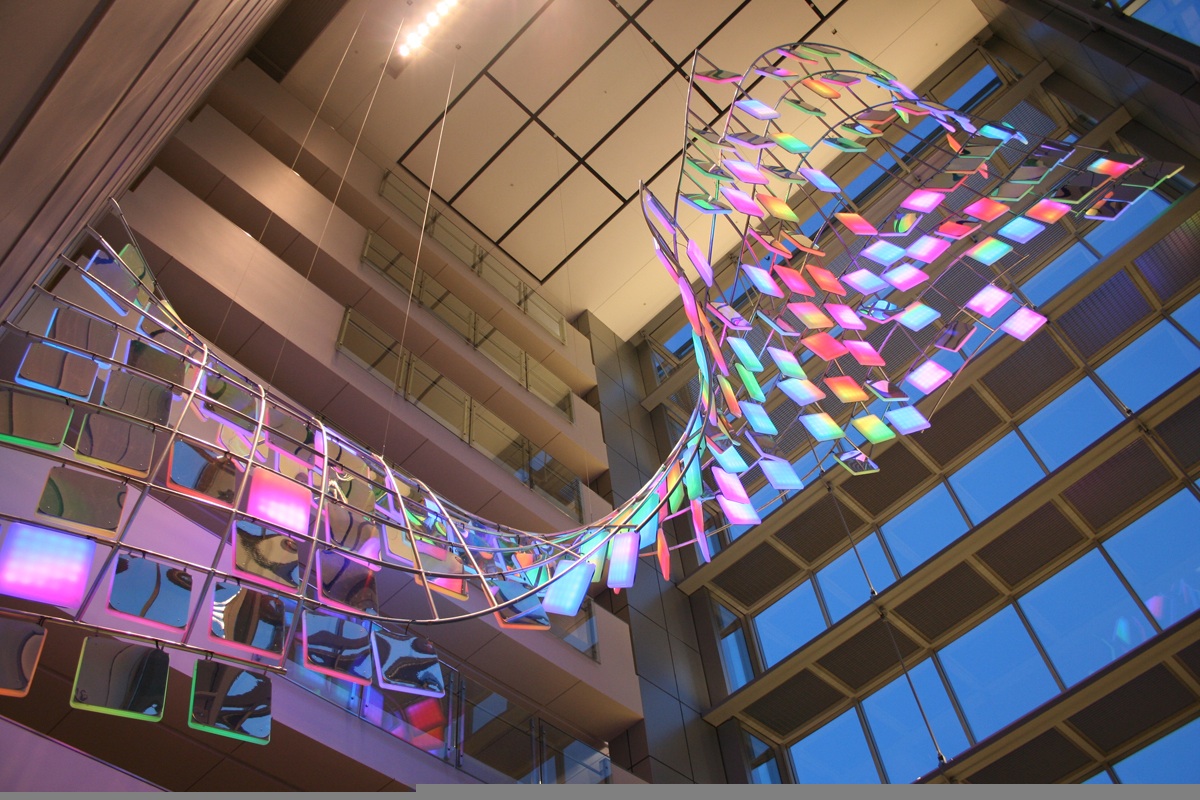 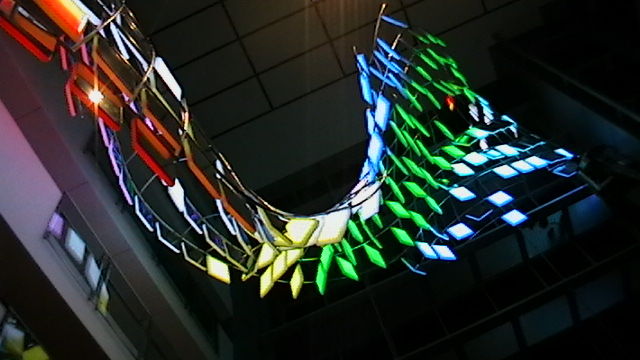 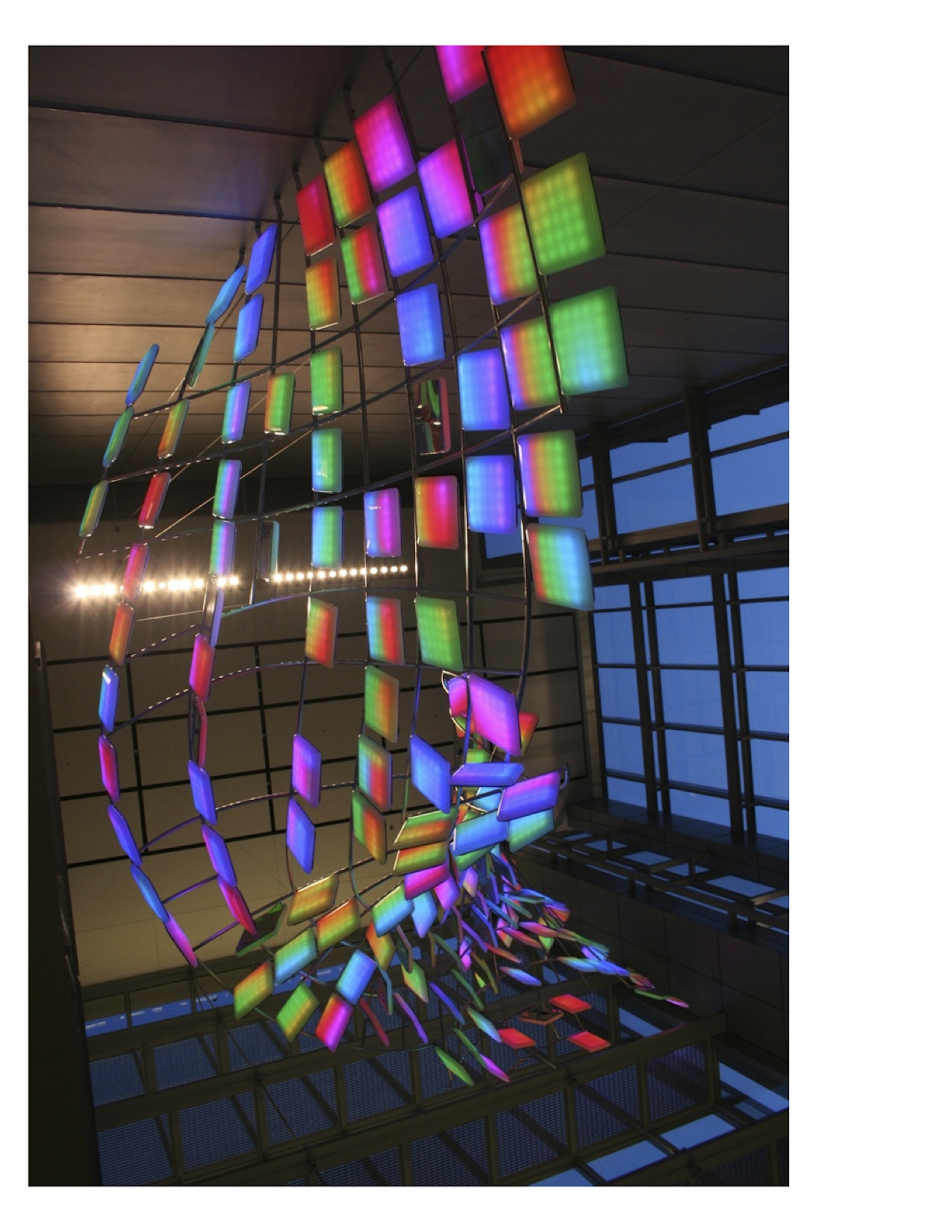 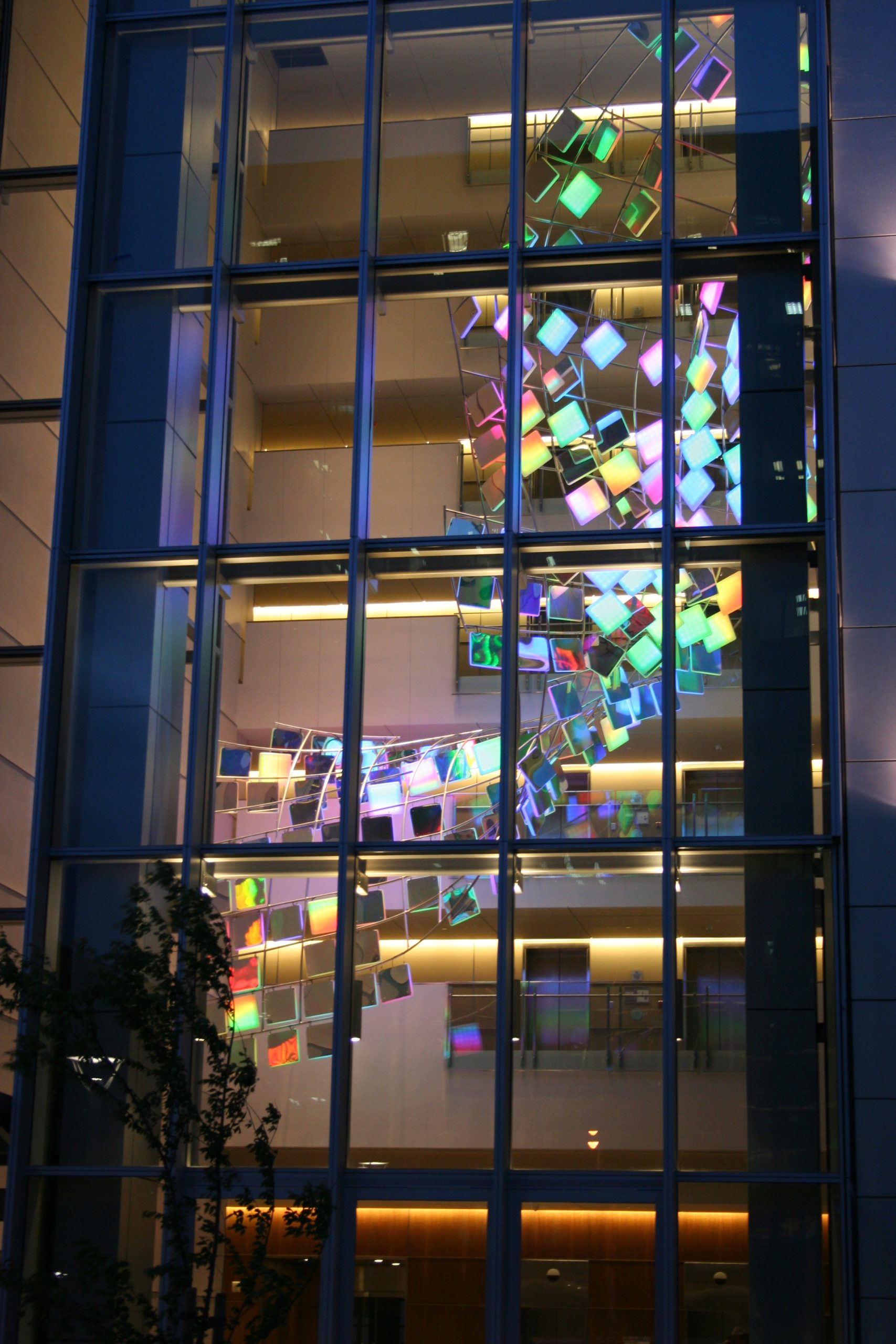 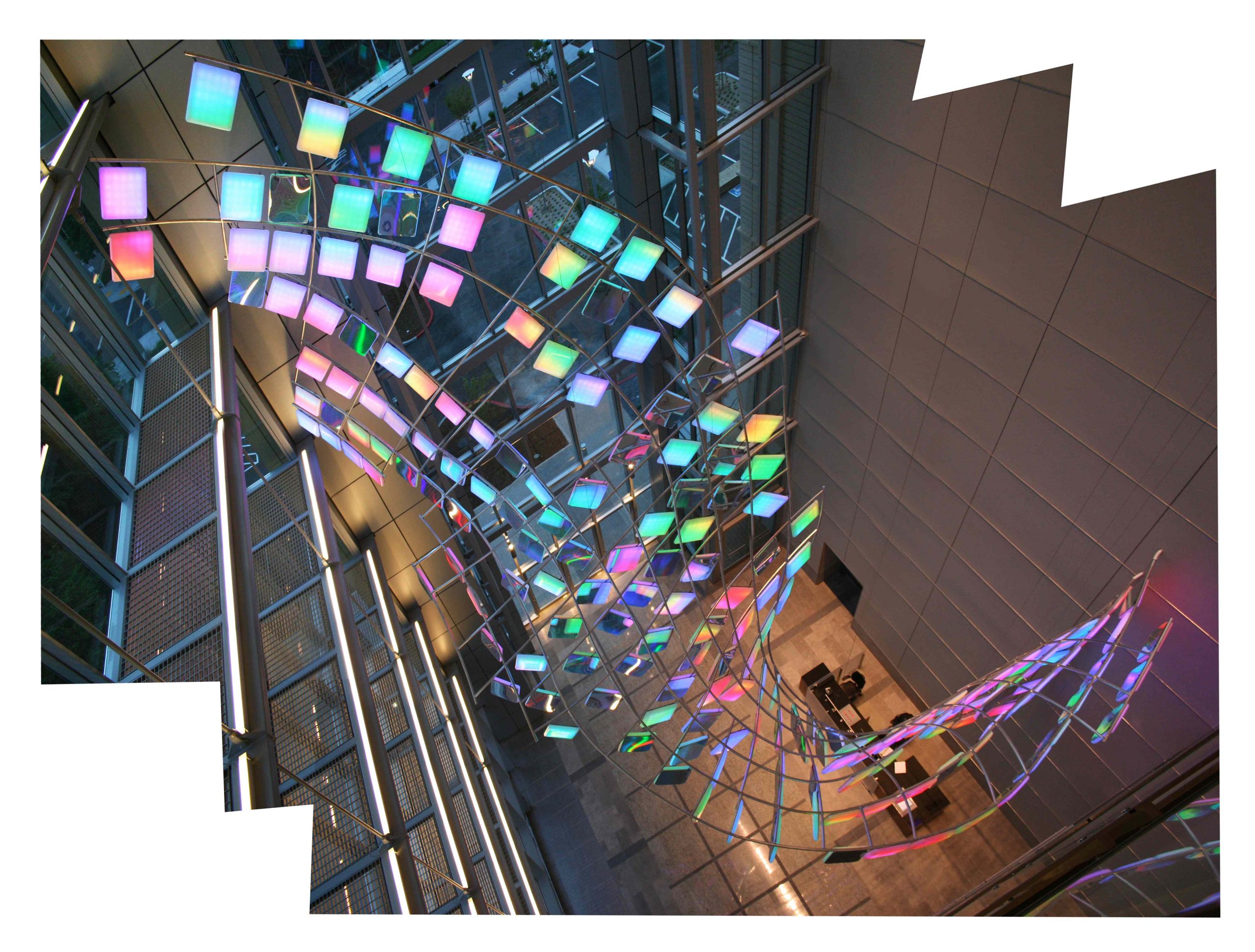 The RAPIDS ($290,000.00) 2008, Sacramento, CA. 150’W x 60’L x 84’ H,
Comprised of 194 (19”x 19”) “Chiclets”, containing 25, (Red, Green, Blue) LEDs, (Light Emitting Diodes), which are CCU Streaming Video programmed to constantly fluctuate animated patterns of water moving quickly and turbulently down through a shallow stream.
Chiclets are suspended within a rigid Aircraft Aluminum Tubing framework & appear to cascade through the upper aerial portion of 85’ lobby.
The back surface of each Chiclet is covered with holographic mirror that diffracts Sunlight into rainbow colors, so the RAPIDS both emits and reflects light.

HOK Architects had drawn a rendering of the building’s lobby, showing a large mural on the main wall, showing Prospectors panning for gold in the Sacramento River. With the assistance of a Graphic Designer I had this timeworn mural to be peeled away from the wall, furthest from the 6 balconies that look into this atrium. I then had the mural only show the rushing River. Next I segmented this water image into 2’ squares, indicating that they were video screens onto which I would broadcast video of water-falls, rapids and generally agitated water.
When I presented this initial concept within Sacramento’s City Hall; the Fire Marshall expressed concerns that this large array of 24” square horizontal Screens; would obstruct the ceiling’s water sprinklers’ usefulness. I asked if all of these Video “Chicklets” were perpendicular to grade be acceptable? After I showed him the reconfigured Maquette he approved my design.
I video-taped small movies of rapids and water-falls - in New York’s Adirondacks and Algonquin Park, in Central Ontario. These were then converted to data-files used to address the approximately 200 low-resolution video screens, hung across this 85’ High x 60’ Deep x 100’ wide space.

The assistance of the Graphic Designer helped illustrate the transmogrification from Prospectors panning for gold in the Sacramento River to being 200 video screens suspended within the building’s atrium-entrance.
The Data Engineers took hours of video I’d shot of fast-running water and transfigured them into the programming language used to address these 200 screens ... now affectionately called “Chicklets”. A new video-conversion protocol (appropriately called “Firefly”), had to be created to accomplish this feat.
It took a month for three of us (two of us to cut and bend the tubing and the welder in the large man-lift), to create the swooping configuration of the 2” diameter Aircraft Aluminum Tubing Armature, through which all the wiring emerging from the south-facing wall would be distributed to activate every of these video screens. I had to constantly go up and down the back stairs (the Elevator wasn’t operating as yet), to view our physical disposition was progressing, when seen from every of the 6 balconies
Another week was taken for the Expert RGB/LED Component Installers to wire-in all 200 screens, using the same 80’ man-lift, after the welder and the pipe-bender had departed.

My client (David Taylor Interests) and HOK Architects were so excited about my ‘water’ theme for “The RAPIDS”; they and the building’s Lighting Engineer agreed with my suggestion that the Architectural 230’ W x 68’ H, Louvered Embellishment (a wedge shaped, open, metal structure partially filled in with rows of horizontal aluminum louvers), being placed upon the 25 story building’s south elevation (approximately 360’ above grade), should be illuminated via a series of 36 programmable RGB/LED (30 K2 3 ft. linear fixtures) ... which installation I would title “LUMETRIC RIVER”: celebrating the confluence of the American and Sacramento Rivers.