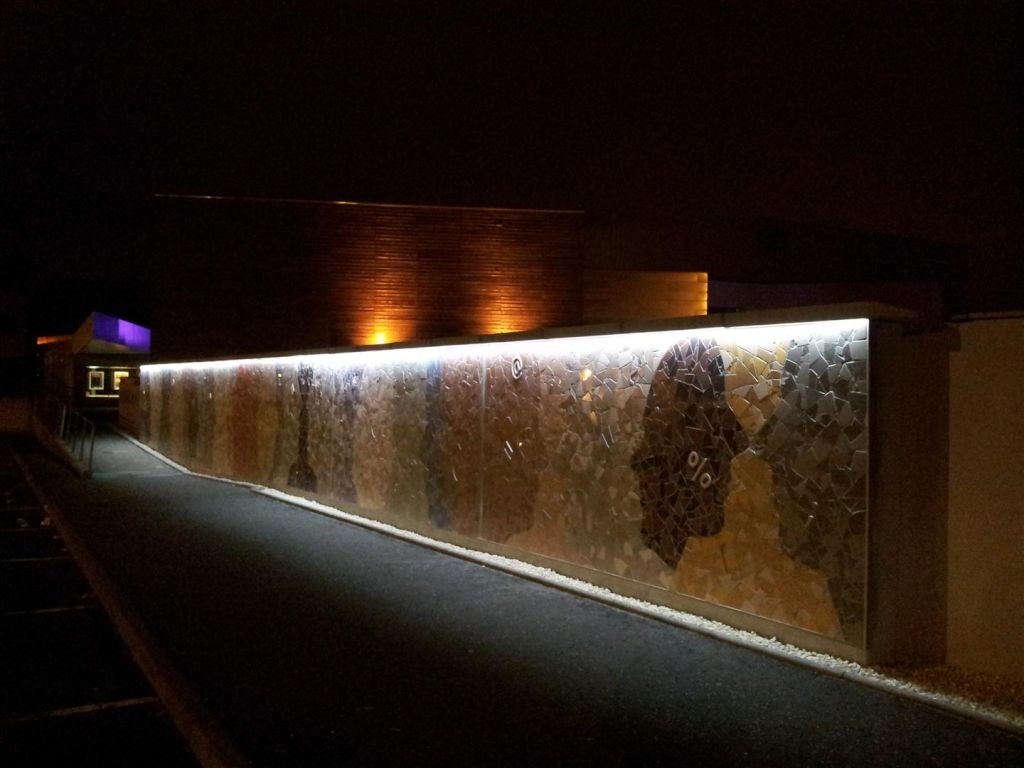 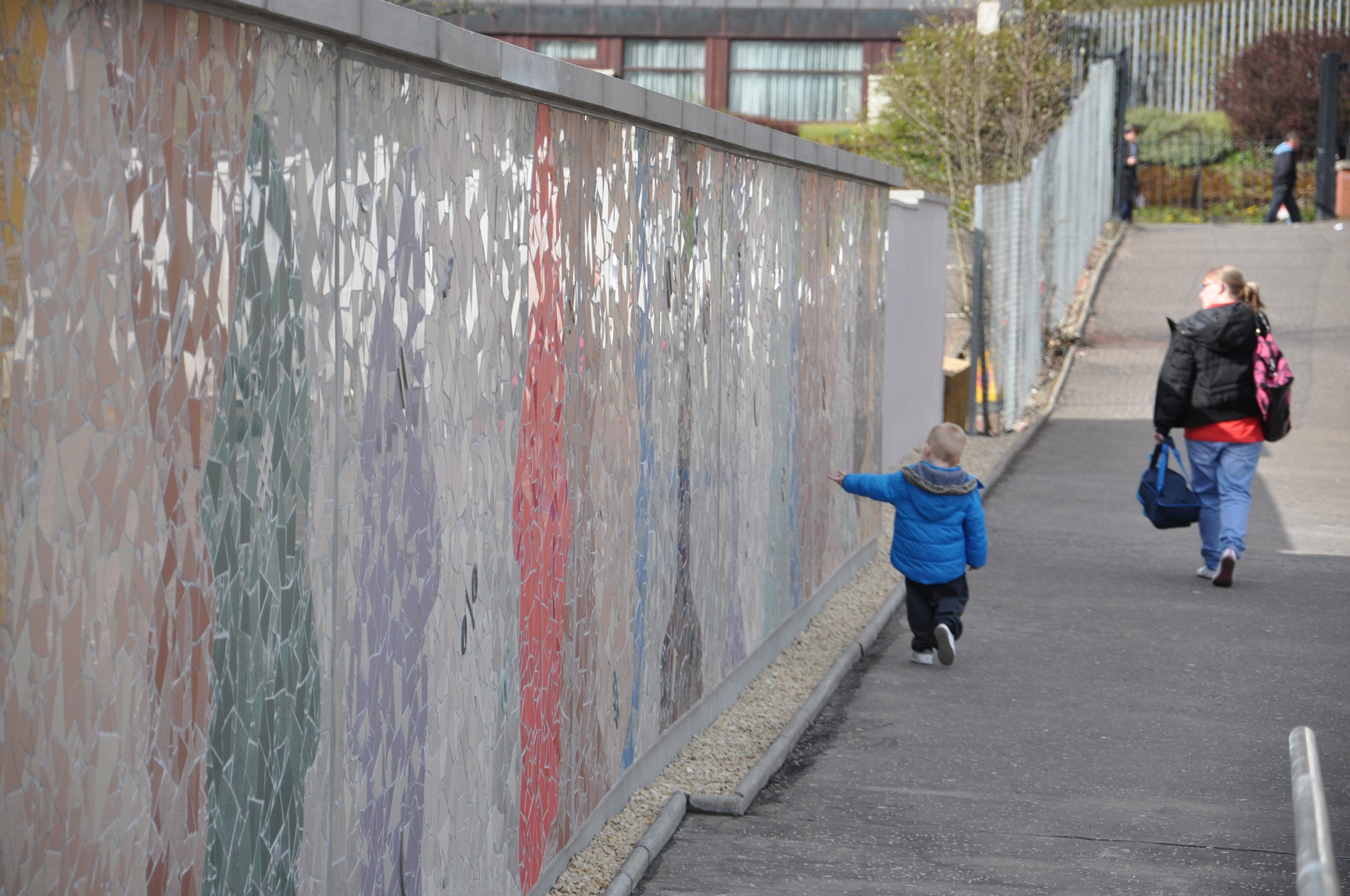 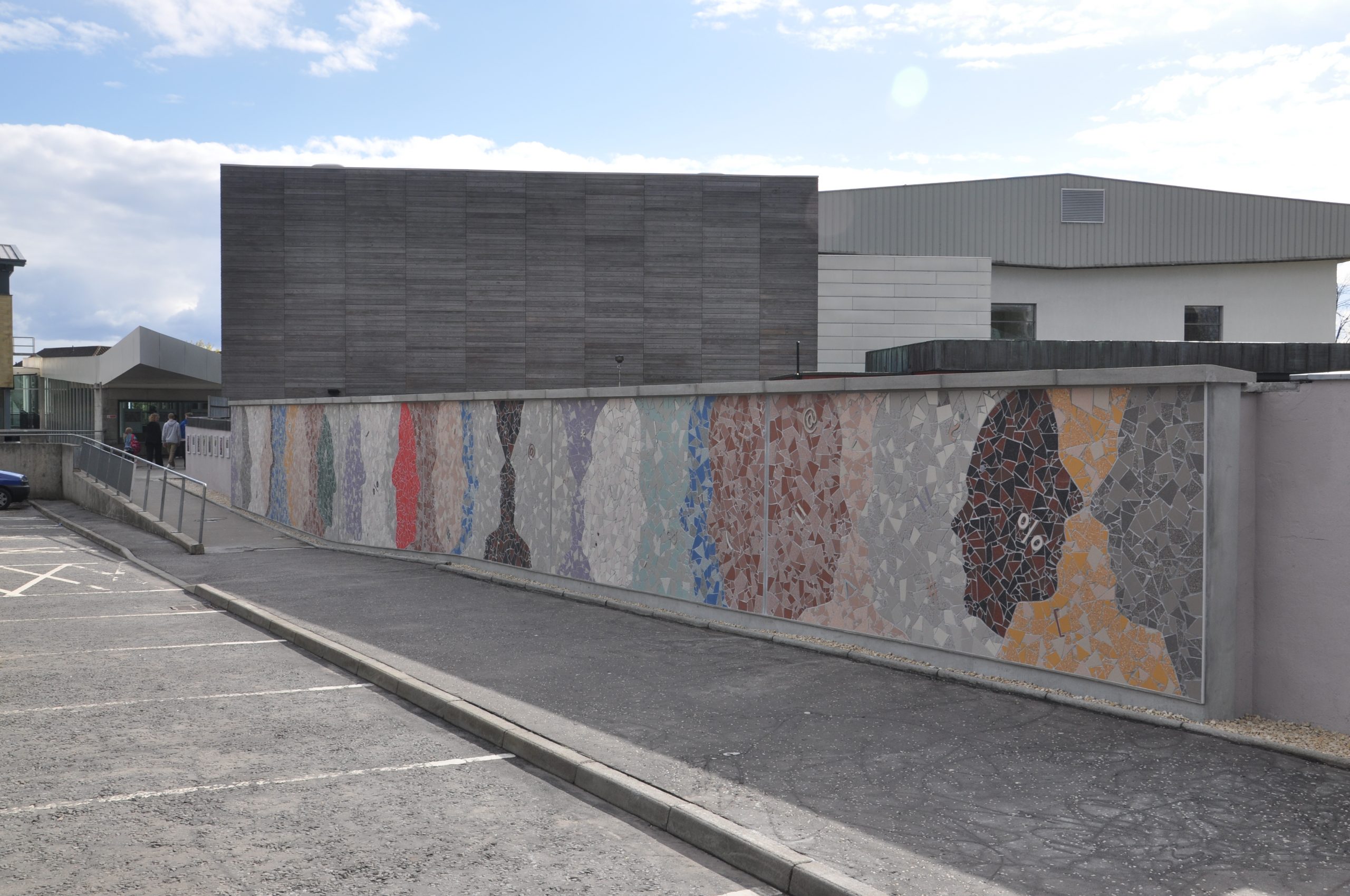 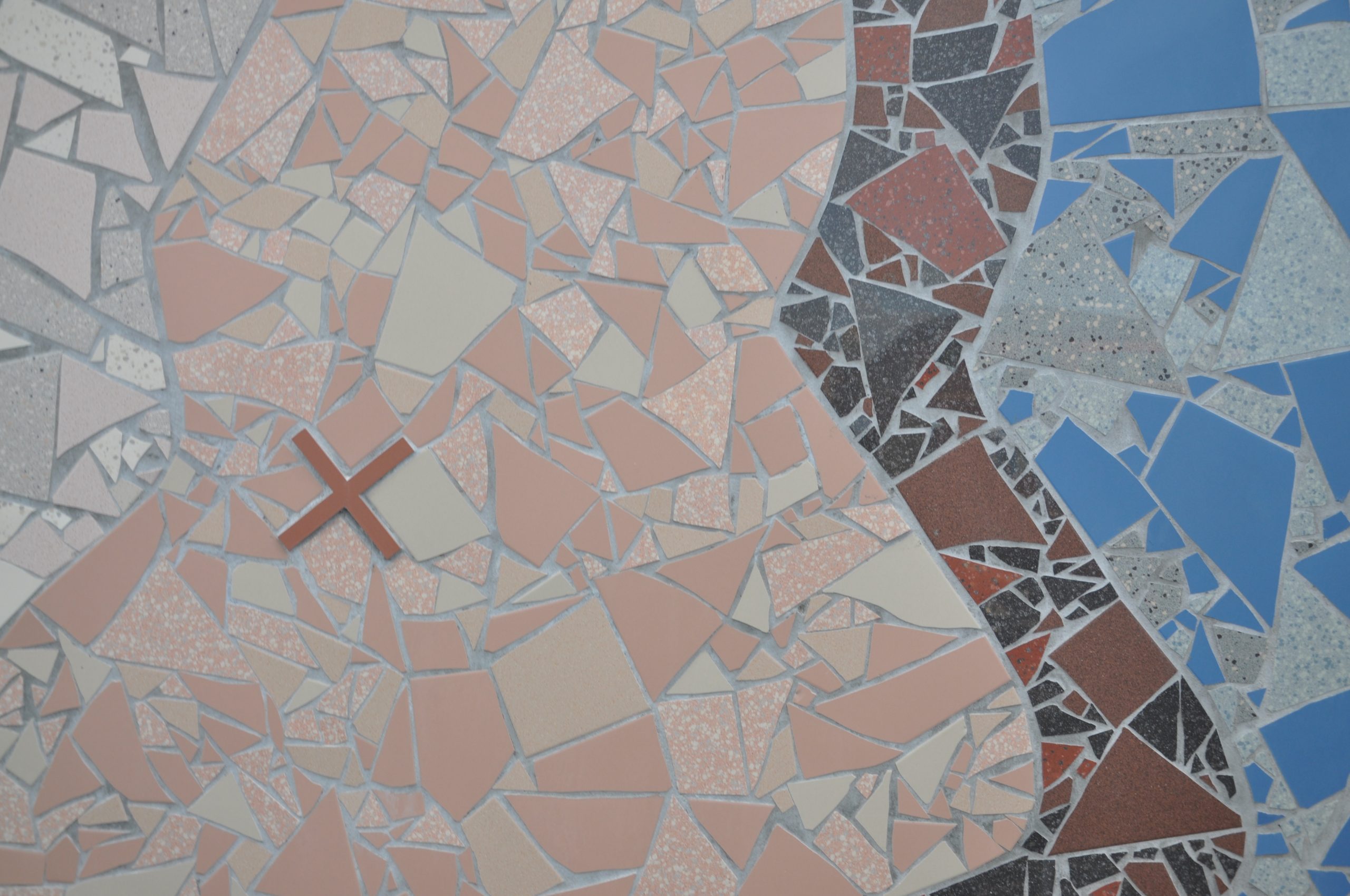 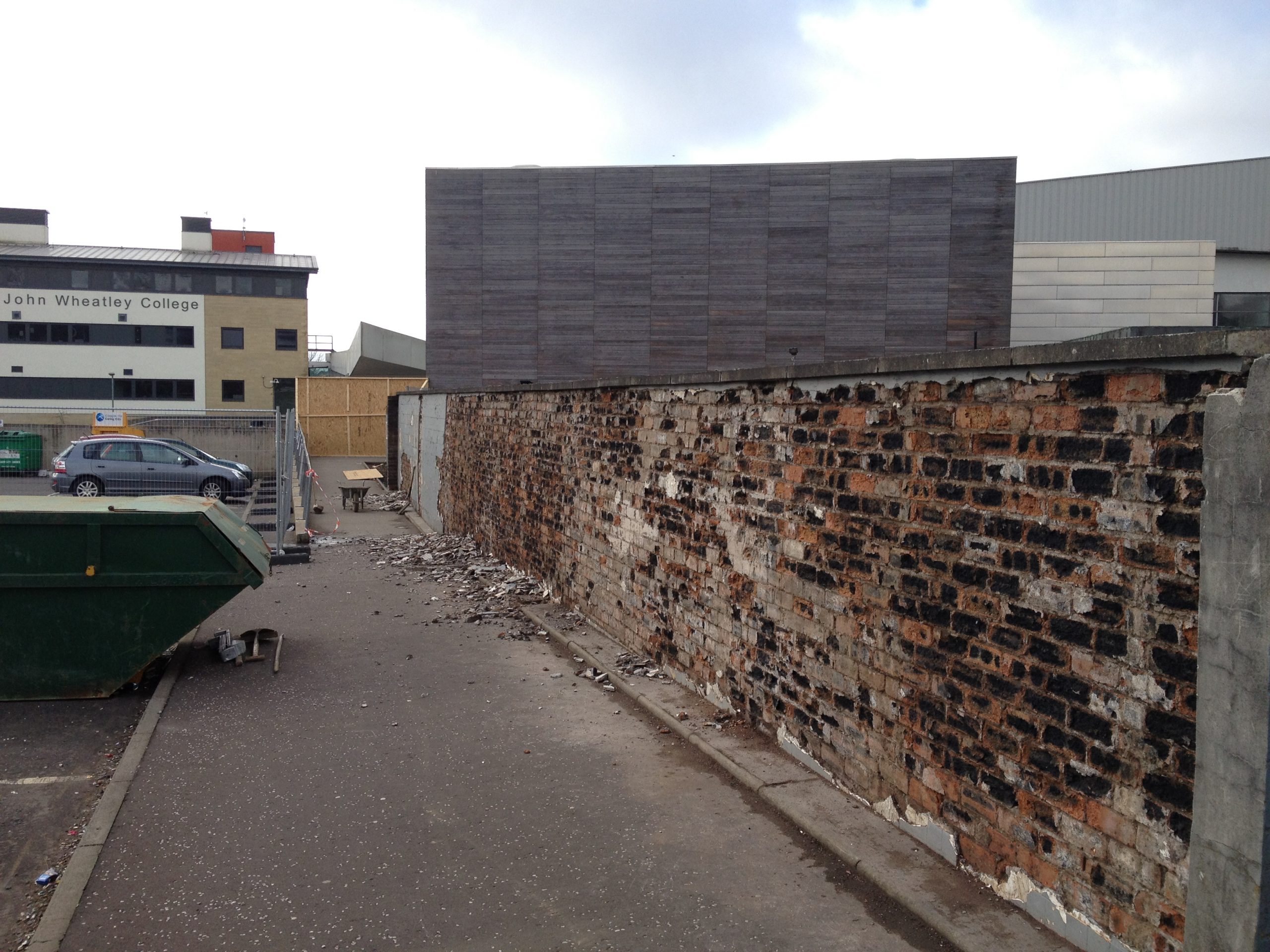 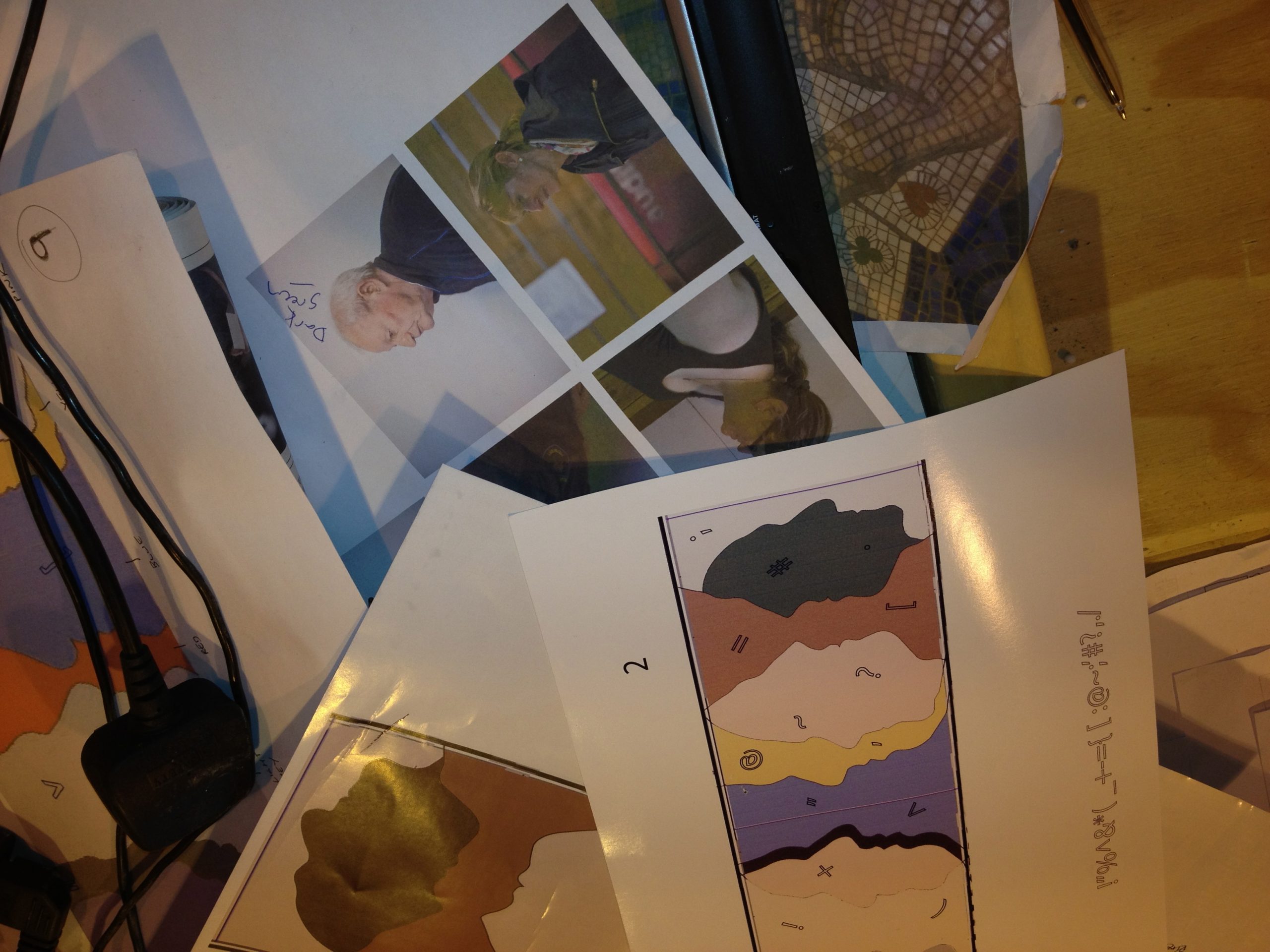 The New Easterhouse Mosaic revolves loosely around the iconic Easterhouse Mosaic, a world-famous identifier within the area in the 1980’s that was created by the local community. Alex was asked by The Bridge to consider using this mosaic as a starting point for his first   permanent public artwork. 'The New Easterhouse Mosaic' now acts as a sign for The Bridge. It is unashamedly decorative but it also refers toThe Bridge's many postindustrial functions   (swimming pool, theatre, dance and music venue, library, cafe and F.E. college). The design of the mosaic displays profiles of people who use the Bridge.

The goals of integrating commission artwork into the new approach to The Bridge was to create a new welcoming approach to a very popular community facility which made reference to the original Easterhouse mosaic and the many mosaic that can be found within Easterhouse today as well as the people of Easterhouse.

Working alongside the now quasi-archaelogical remains of the original mosaic, Alex Frost has managed to integrate the deep-rooted histories associated with it without compromising his own concepts. His activity in making ‘The New Easterhouse Mosaic’ connects his practice with the collective ‘architectural memory’ of the area, situatinng it intellectually and geographically. The original mosaic included a profile head in the form of a phrenology chart as well as everything from benefit cards to Karl Marx in a toga. Profile heads in various pastel shades, derived from photographs of people visiting The Bridge, constitute the core imagery of Frost’s work. They are emblems of a community and emblematic of the success of The Bridge in playing a role in its life. At the same time the identities of the profiles are examples of the guessing games that Frost likes to spin around his work.

The collaboration between artist and architect on this commission was key to realising such a large scale and complex artwork within an existing context. Collective Architecture’s role at the start of the project was to determine the suitability of the existing wall for the mosaic and how to interporate Alex’s initial sketch ideas into working drawings. A community project was launched by the Platform Arts Centre to gather facial profiles of the people who use The Bridge. These profiles were then used by Alex within the artwork, he has deliberately not let anybody know if their profile has been used.
Collective Architecture worked closely with Alex to assist with suitable product specifications and to produce 1:1 template drawings for producing the individual mosaic pieces. The process of making the mosaic tiles was completed over a period of three weeks by Alex and two assistants.