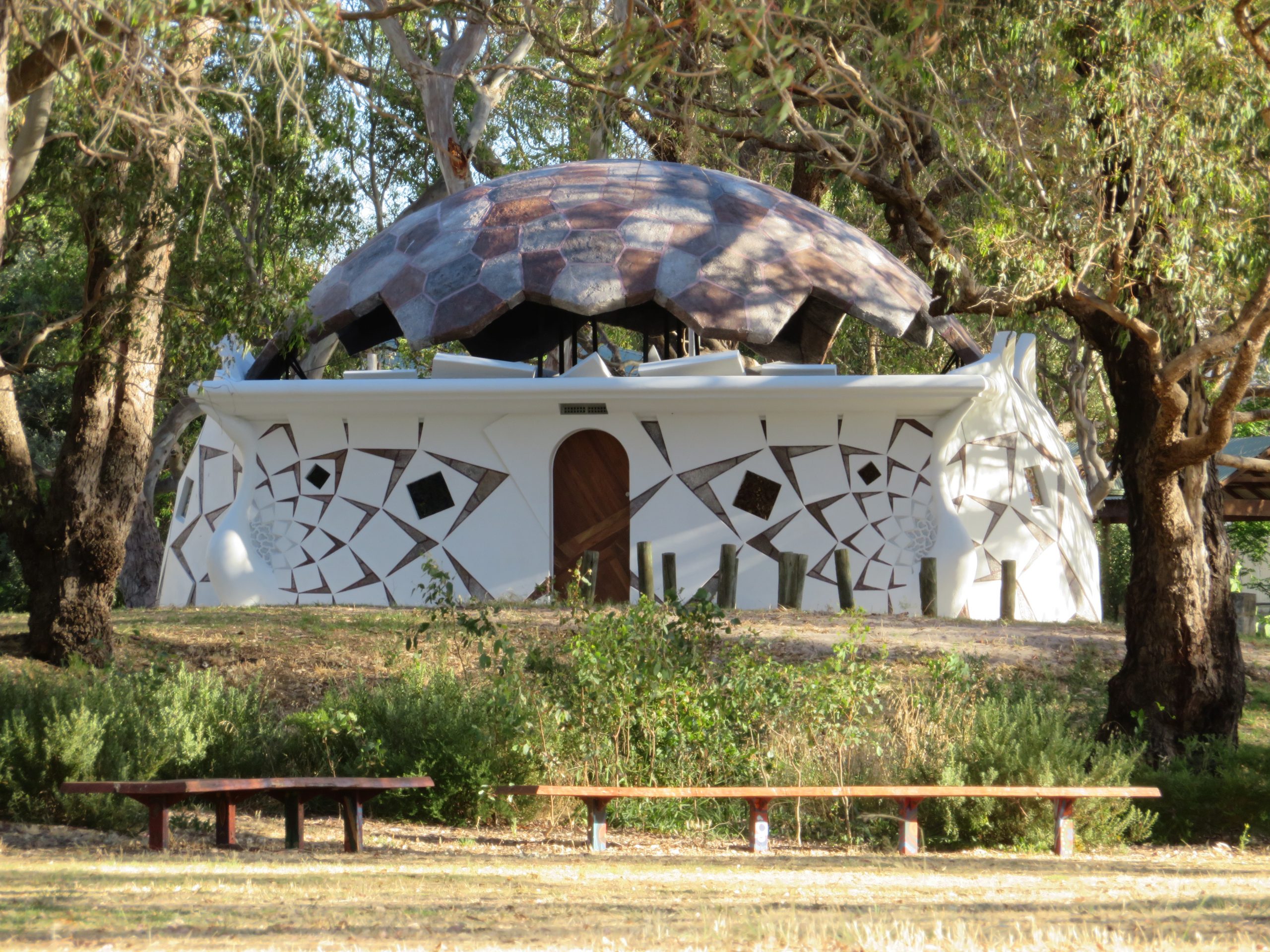 This transformation combines public artwork with a public toilet, reflecting the river location with references to the swamp tortoise, egrets, fish, gnomonic patterns and kangaroo paw plant. The palette is lightweight concrete, stucco, glass, oxides, paint and stone and measures 4.5 metres by 9 metres and 4.5 metres.
A vital link between the location of the Claughton Reserve and the upgrade of a utility is created through transformative artwork to the exterior of the facility. The result is an architectural experience where visual ideas are expressed through art, design, architecture, engineering, history and mathematics. This re-imagining articulates a sense of place and visually redeems the public toilets through the sublime geometry of Platonic form. It corresponds with its environment, transcends social hierarchy and provides an other-worldly pavilion for very worldly functions. A perceived irrational appearance is paradoxically both site-specific and exotic. Architectural contradictions abound; a floating granite carapace dome, flat walls that spiral with spirals based on squares and the cornice can barely contain the rhythm and energy of the walls. All these are resolved by underlying geometric, compositional principles that maintain aesthetic cohesion between the parts.

The goal was to seamlessly integrate the artwork onto and into a dilapidated piece of infrastructure, so that the original fabric would be entirely subsumed into the new design and material. The original building provided a core from which the entire composition was extrapolated, using the proportions of what was a simple cuboid structure. This basis of the integration is the transformative power of the work, whereby a rectilinear form becomes a curvilinear one. The importance of this integration is the visual cohesion upon which the project depends.
The design is a modern-day iteration of Roman classical architecture with its spheroidal domed roof and the walls as the modulus. The spirit of Vitruvius is invoked in threefold symmetry [reflective, rotational and radial symmetry] and eurhythmy, or the mathematical harmonies uniting the parts and whole. Pi, the golden mean, 1: root 2, the octave, perfect fifth and a hexagonal tessellation ensure rigour, composure and restraint in a building that otherwise appears free-spirited and improvised.

The collaborative nature of the work was between myself as the artist, Artsource - Western Australia’s peak government arts body – and the City of Bayswater, a municipality within the state capital Perth. The project was part of an overall masterplan for the upgrade of the Claughton Nature Reserve, a small park on the banks of the Swan River. The City of Bayswater Council commissioned the work through Jeremy Maher and Paul Parin of Artsource facilitated the project, both of whom I worked closely with throughout the project. Local steel workers Manny Arkveld, ACB, Wenco and Federal Metal fabricated the steel frame armatures, MCM batched the lightweight polystyrene concrete, John Paul Mueller of Sublime Limestone Solutions assisted with the plastering and Haymes Paints provided the paint and anti-graffiti sealant. The Friends of Claughton Reserve were instrumental in initiating the commission and an enthusiastic volunteer labour force.

In my practice I strive to solve conceptual and aesthetic problems posed by my client’s desired themes. My visual enquiry and aesthetic in general delve into the archetypal, underlying structure of subjects and their relationship to contemporary, local community values and more universally, the human condition. Here, I engage the social substance of a community and unify public sentiment by targeting the liminal point where the vital, societal systems of communities are still in flux, always – to some degree - in the process of becoming or settling into meaning. Space becomes animated with the implicit movement, sensual formal vocabulary and monumental scale of my topological, architectonic structures. Tactile expressions of the congress of material and composition create differing spatial experiences from various viewpoints - the quality of parallax. An evocation of ancient ideas echoes in my contemporary artworks, creating a philosophical language that articulates the rudiments and complexities of manifest form in gestural instruments of suggestion. This work has featured on ABC Radio National’s Books and Arts program. It has attracted interstate and international visitors and has been thoroughly embraced by the Perth community, who see it as a source of civic pride.