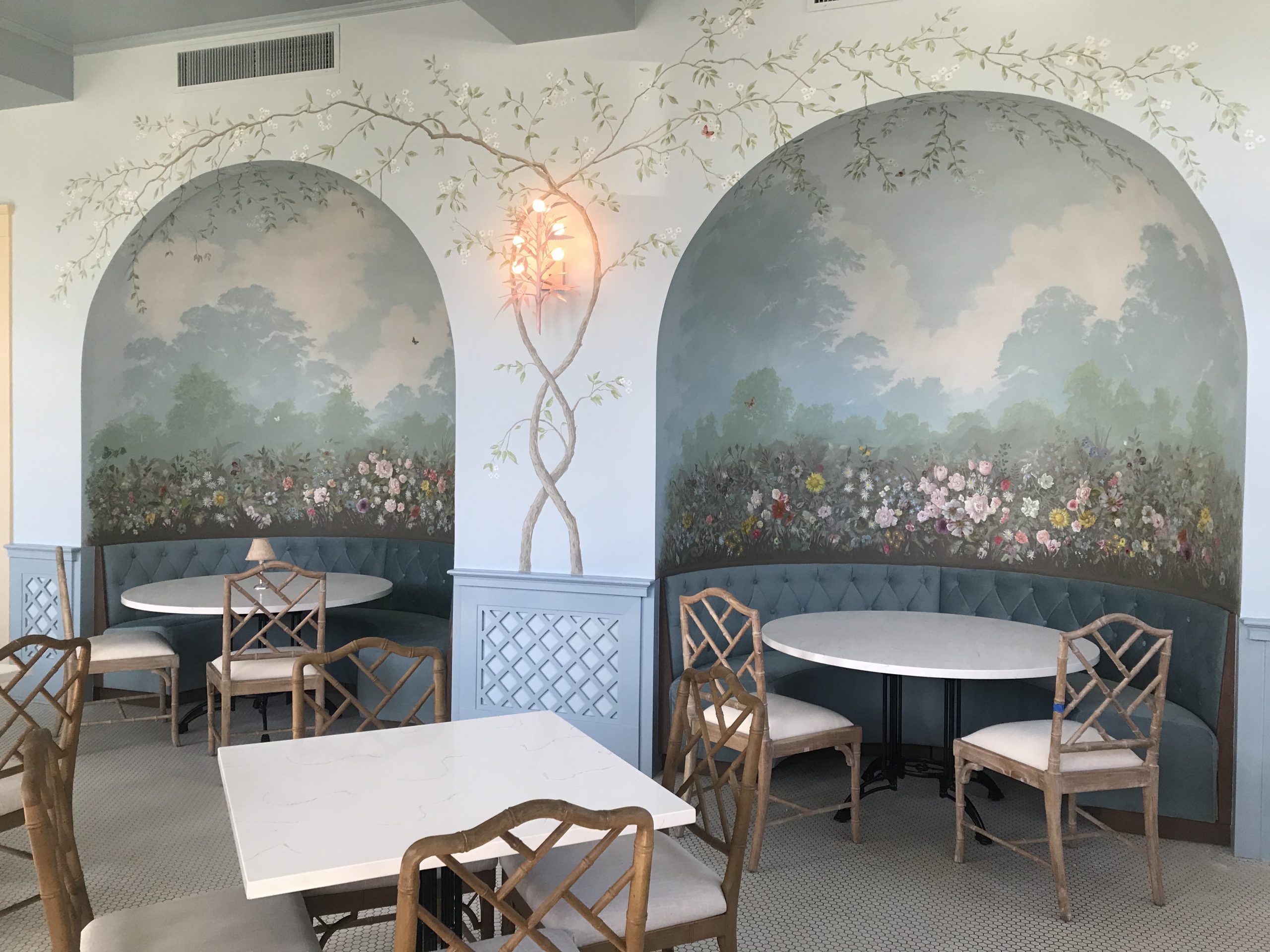 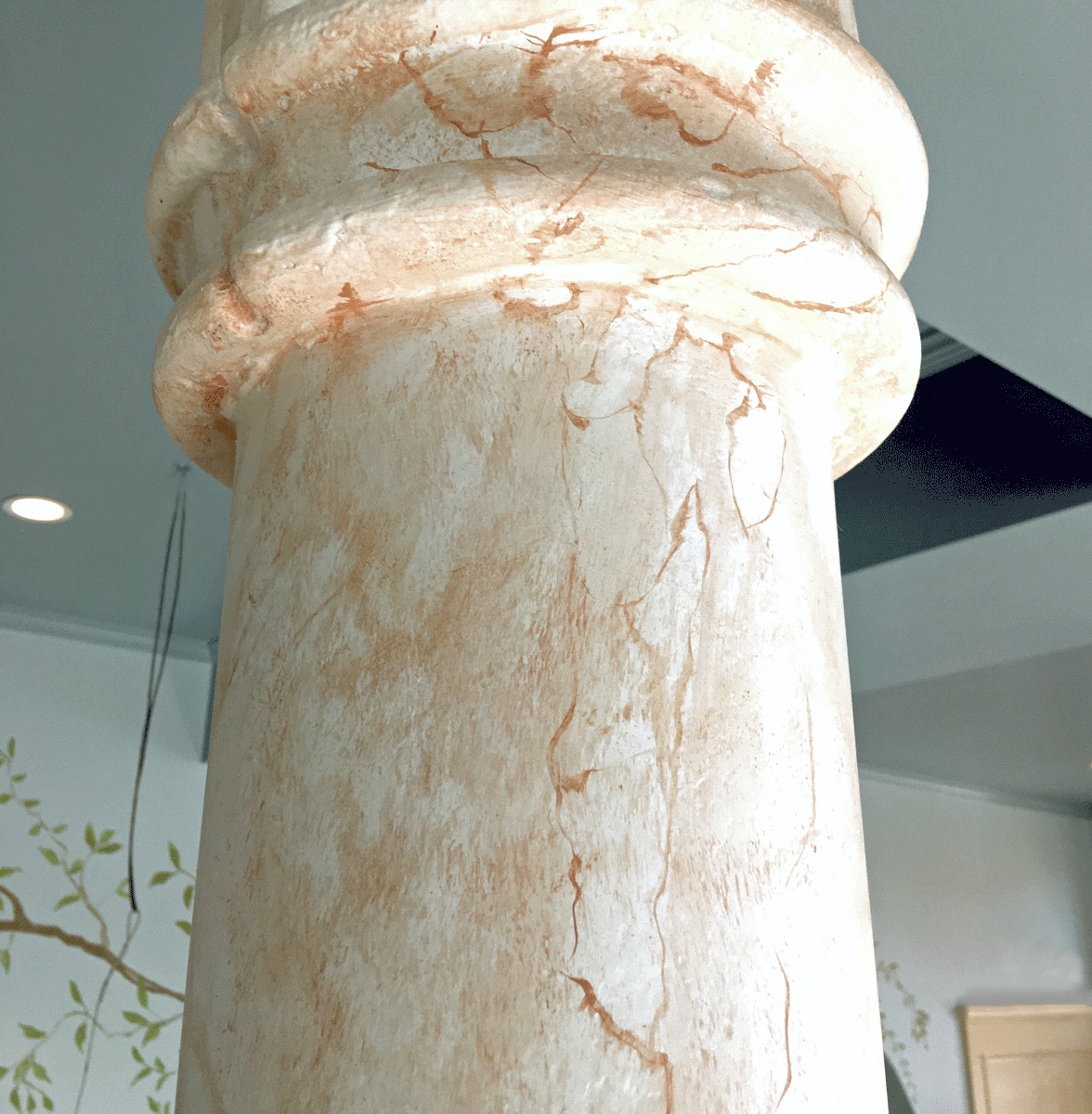 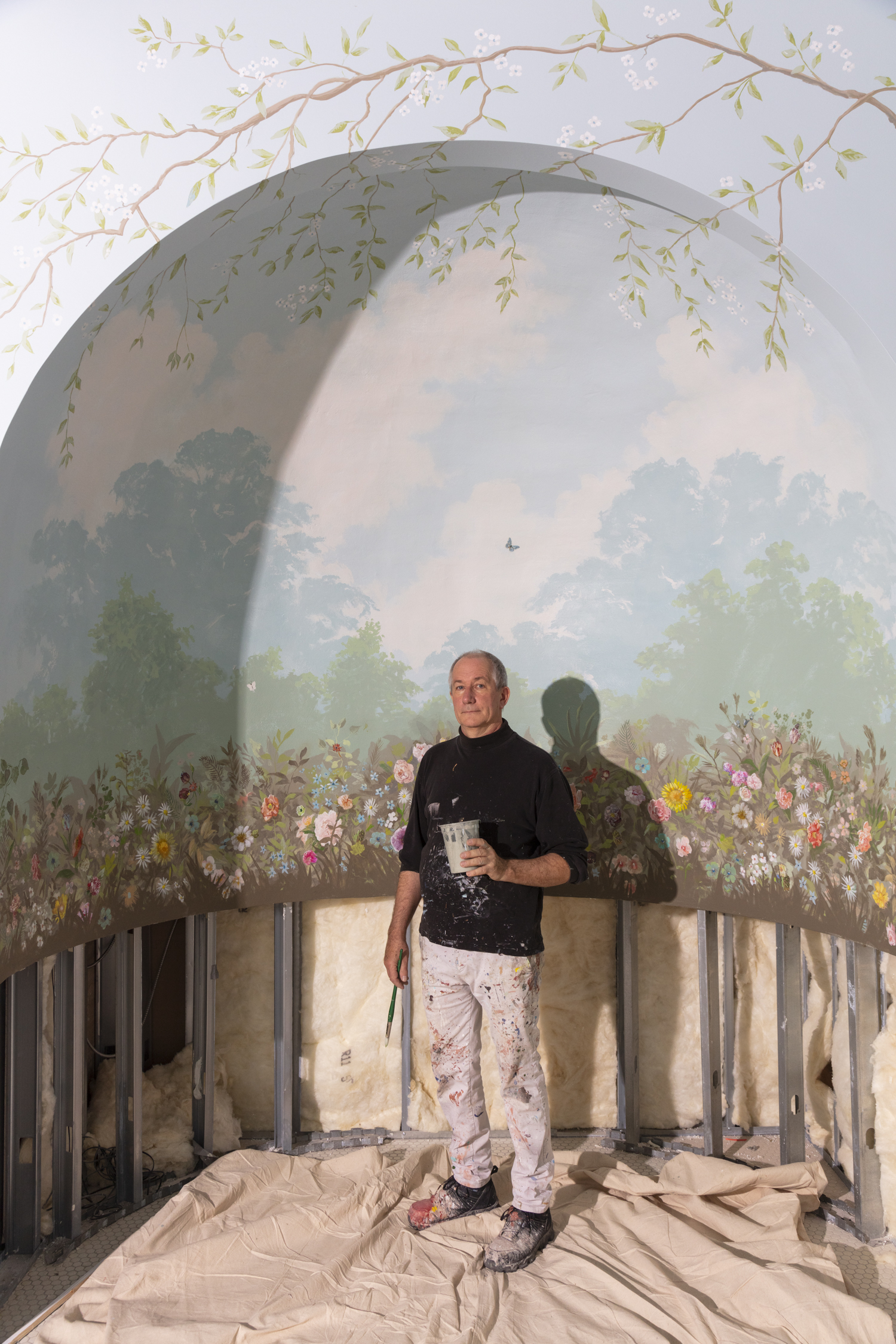 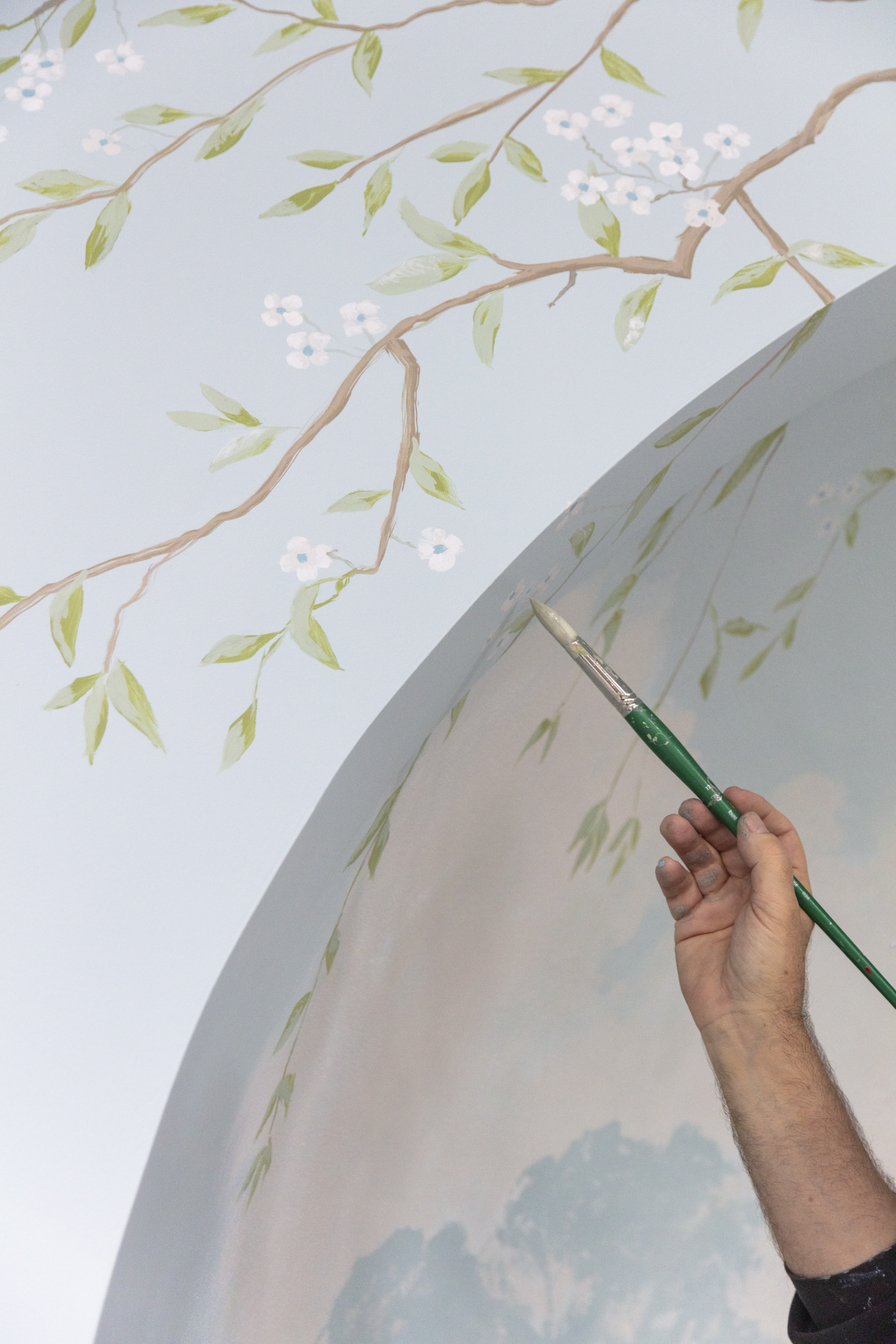 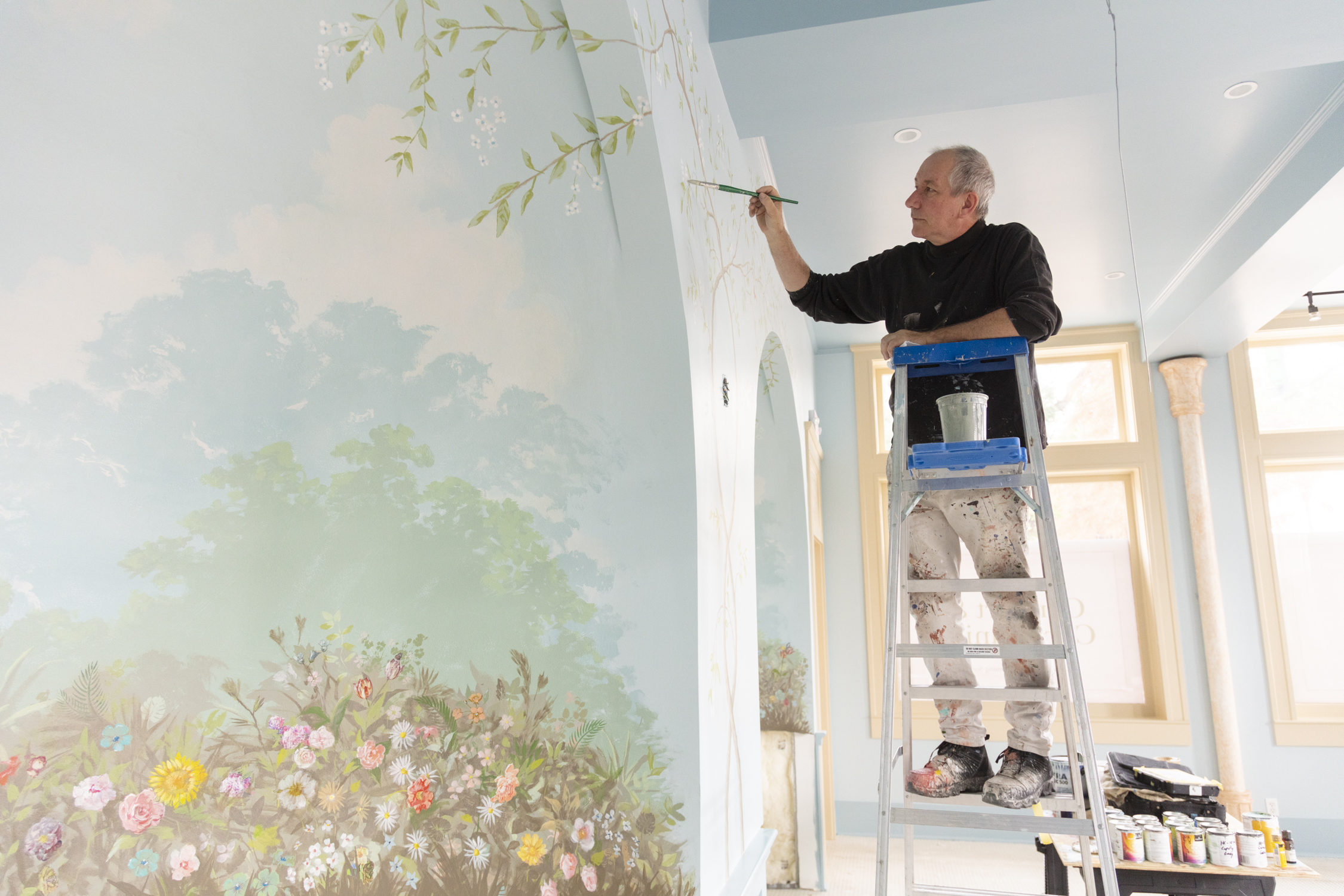 NEW MURAL CREATED FOR “THE GLORIETTE” RESTAURANT
Grahame’s recent mural commission for the historic Southern Hotel, in Covington, Louisiana, consisted of creating thousands of flowers, along with faux marble columns, in the highly-anticipated The Gloriette restaurant.
The garden themed restaurant features local and French-inspired cuisine, all in a warm and vibrant environment.

Every custom color was especially mixed to suit The Gloriette's individual furnishings and surroundings. Coral colored columns were realistically painted by Grahame, as well as floral designs to the exterior, and also, the hand-painted sign, which welcomes guests to the restaurant. Every brush stroke was related to a wall with existing Jardin du Fosse wallpaper panels.

Following an initial briefing with the Owner, Grahame produced designs until one was chosen upon. Further details and ideas were agreed on during the painting process, on site.he owner

Grahame was born and educated in the UK, and earned his chops in theatre, with formal training coming from such prestigious institutions as Portsmouth College of Art and the Bristol Old Vic Theatre School. From there, he went on to create scenery for the Welsh National Opera and the National Theatre in London. He relocated to the US, to New Orleans in 2005, and has now settled into the vibrant city of Miami. Now, he bringing my thirty-plus years experience of painting to commission art for film sets to bear on the private sector, painting in homes, restaurants and hotels, and community walls around the world. Grahame draws his inspiration from the Dutch and Italian masters His work can be found in private homes and commercial premises around the world as well as in feature films and television. Knowing that people are going to appreciate what Grahame has done and preserve it, and derive enjoyment from it for years to come – that’s enormously satisfying as an artist.