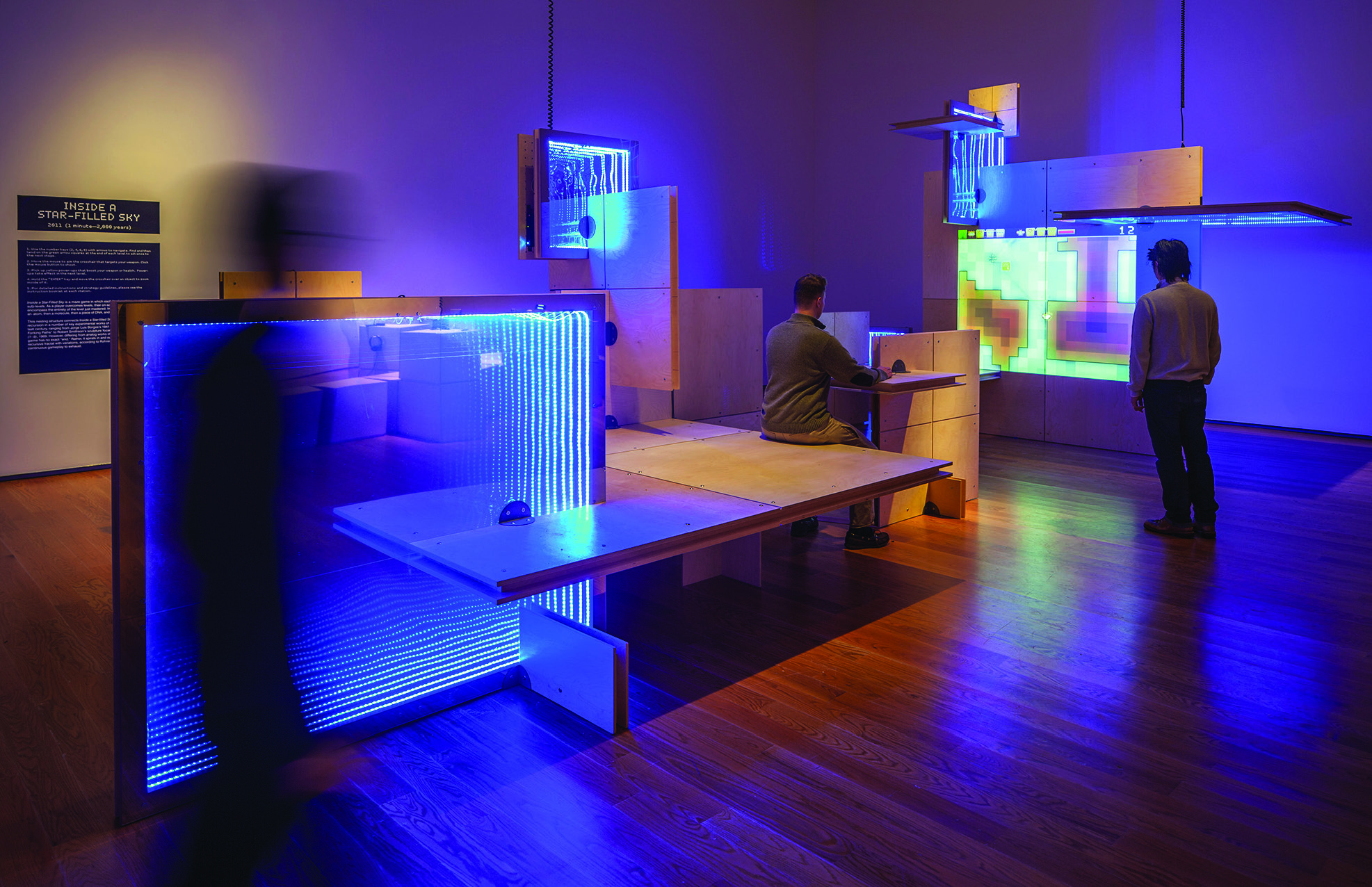 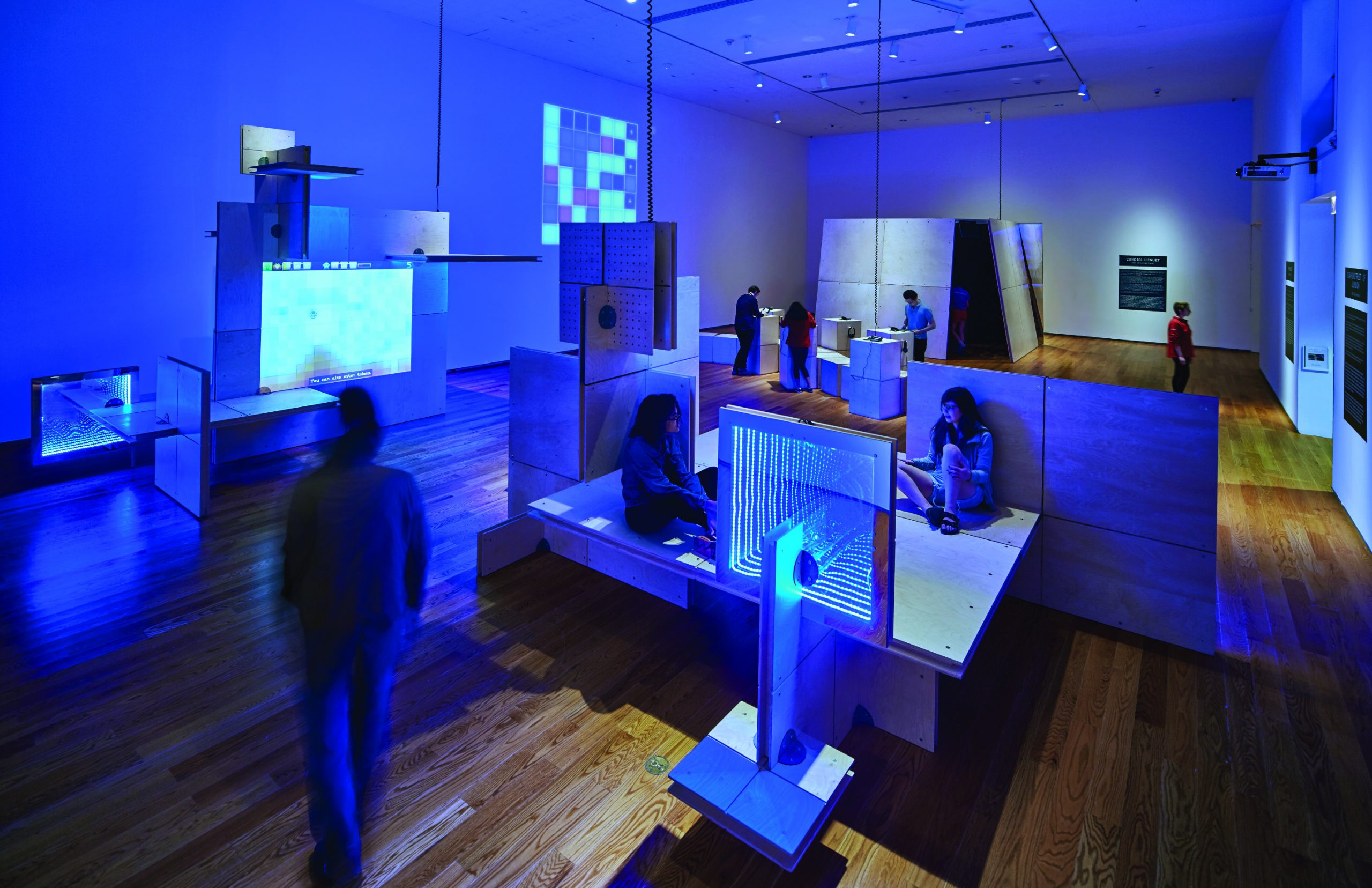 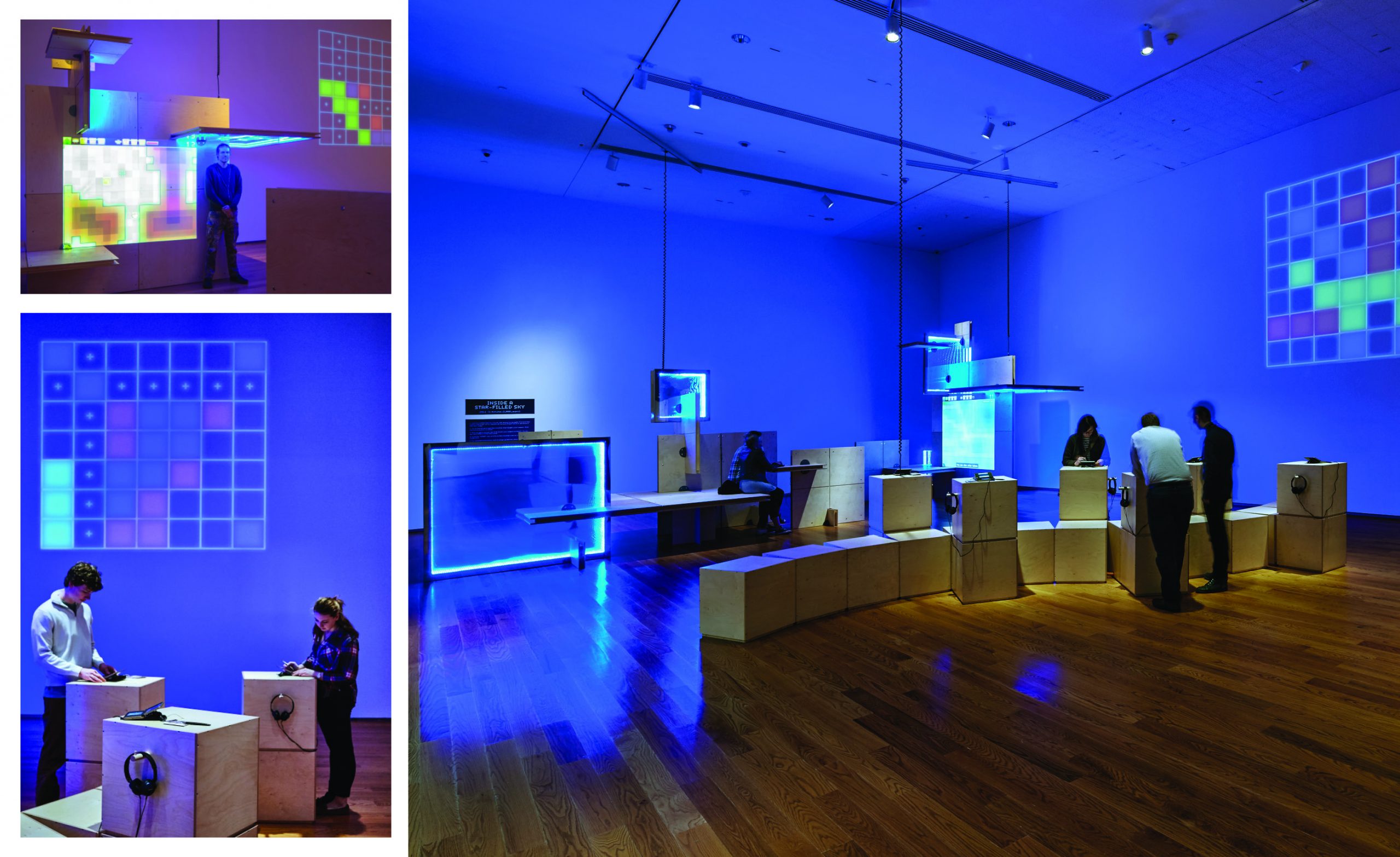 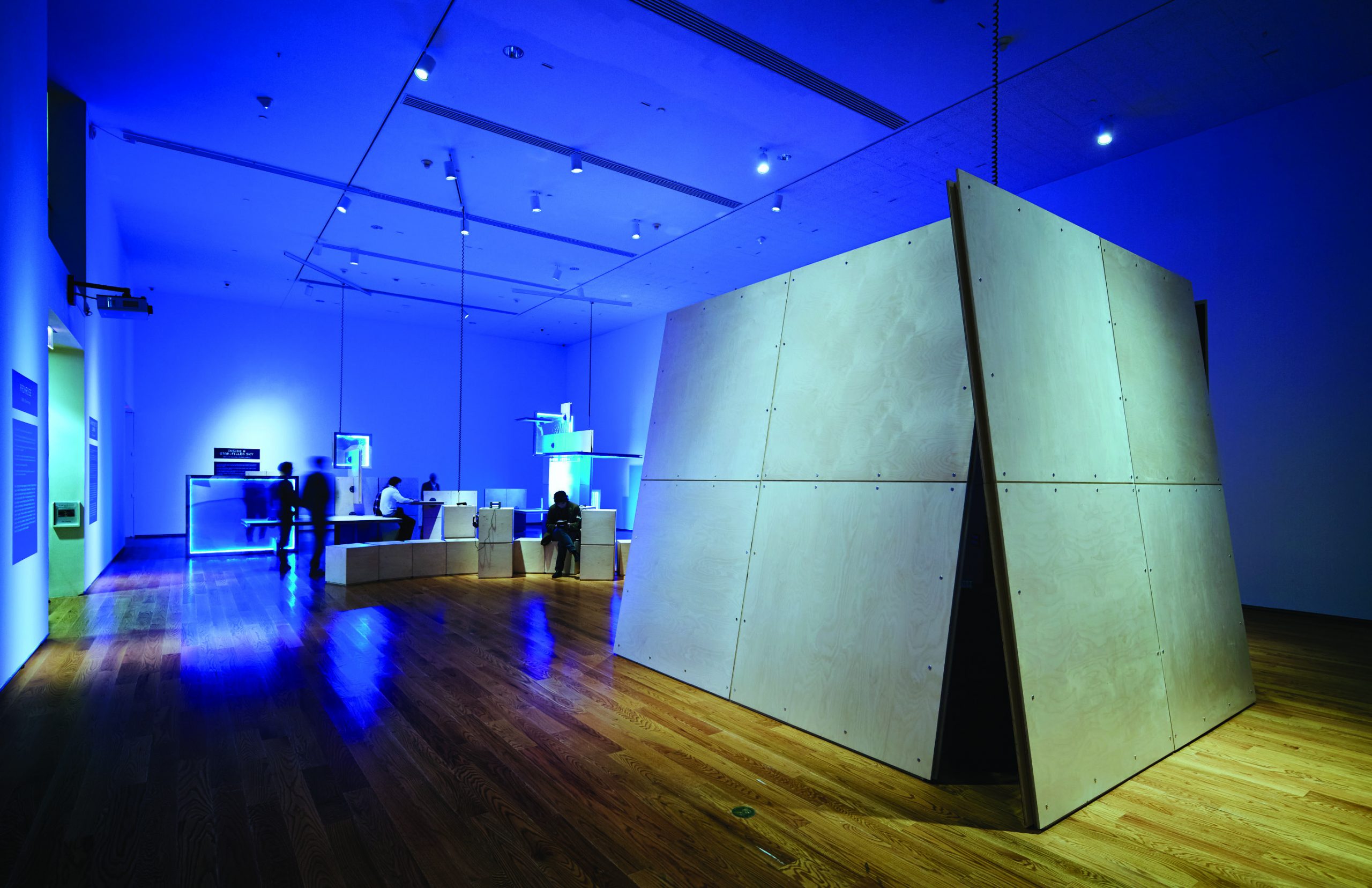 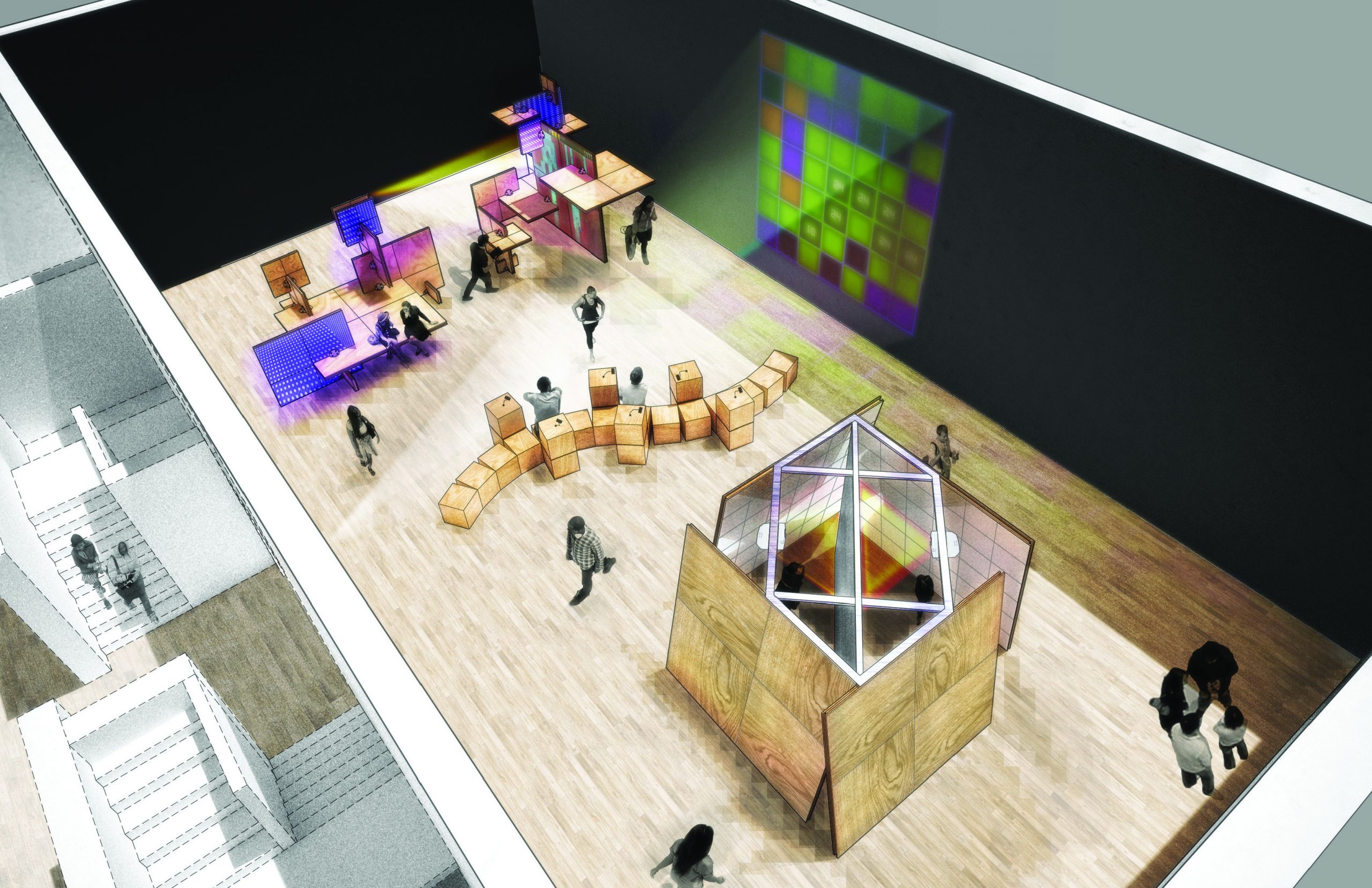 IKD was responsible for the installation design of the first ever museum retrospective of a single video game designer. The exhibition, The Game Worlds of Jason Rohrer at the Davis Museum at Wellesley College, is a survey of the independent game designer Jason Rohrer work which has formed part of the Museum of Modern Art’s initial video game acquisition.

The project is designed around four large installations that both create immersive environments to enhance game-play and form an interpretation of the games themselves. It also challenges the traditional notion that exhibition design should sit quietly behind the exhibited work.
The large scale, immersive, sculptural installations use raw plywood as the primary building material. Under a Star Filled Sky, an arcade-style shooter game that plays with ideas of scale, fractals and infinite recursion, was designed as a pixilated modular space that disorients the player and blurs the boundary between the space of the installation and the space of the game. The installation consists of intersecting square planes, some glowing from blue LED-laced infinity mirrored panels
Diamond Trust of London, is a turn-based strategy game with similarities to Euro-style board games. Its installation is a take on aVictorian courting bench, with plywood boxes arranged in an S-shape that bifurcates the entire gallery. It allows players to play on Nintendo DSs next to each other without seeing one another’s’ screens. The bench also acts as gallery seating.
While the design is centered on creating a focus on exhibited works The Games Worlds explores new possibilities in exhibition design through the immersive installation environments.

IKD served as the design and worked with Jason Rohrer and the Museum to develop the installations..