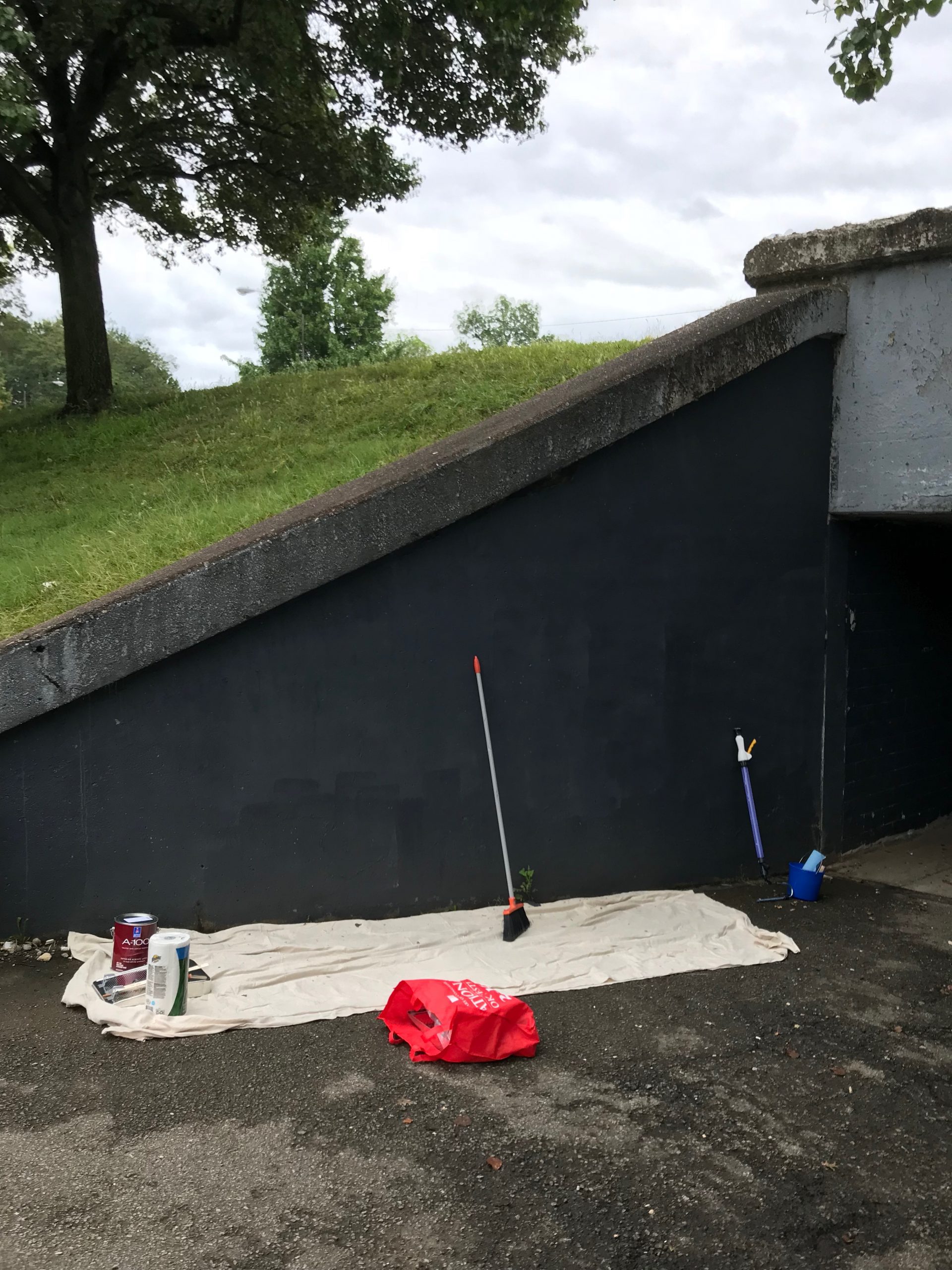 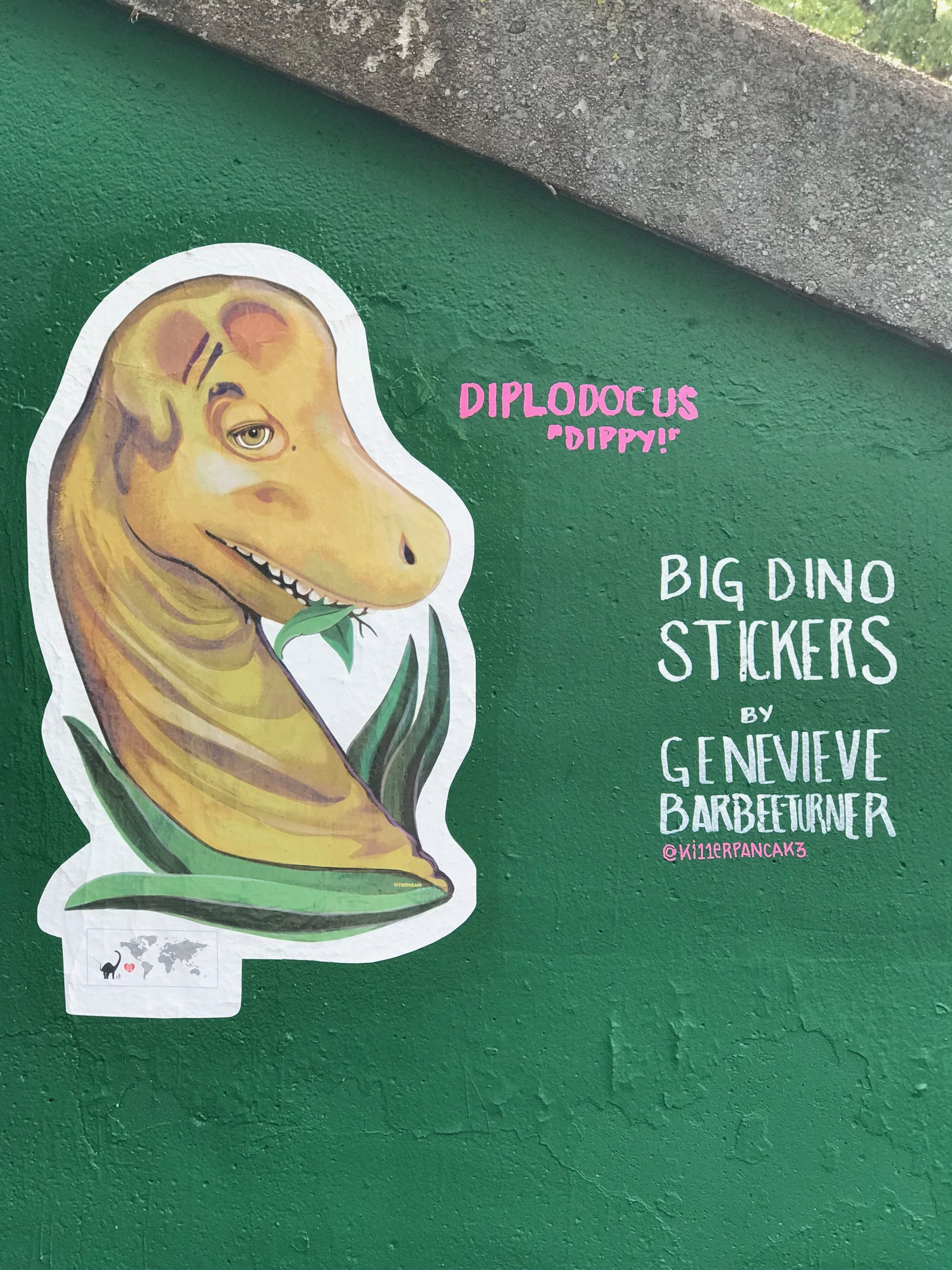 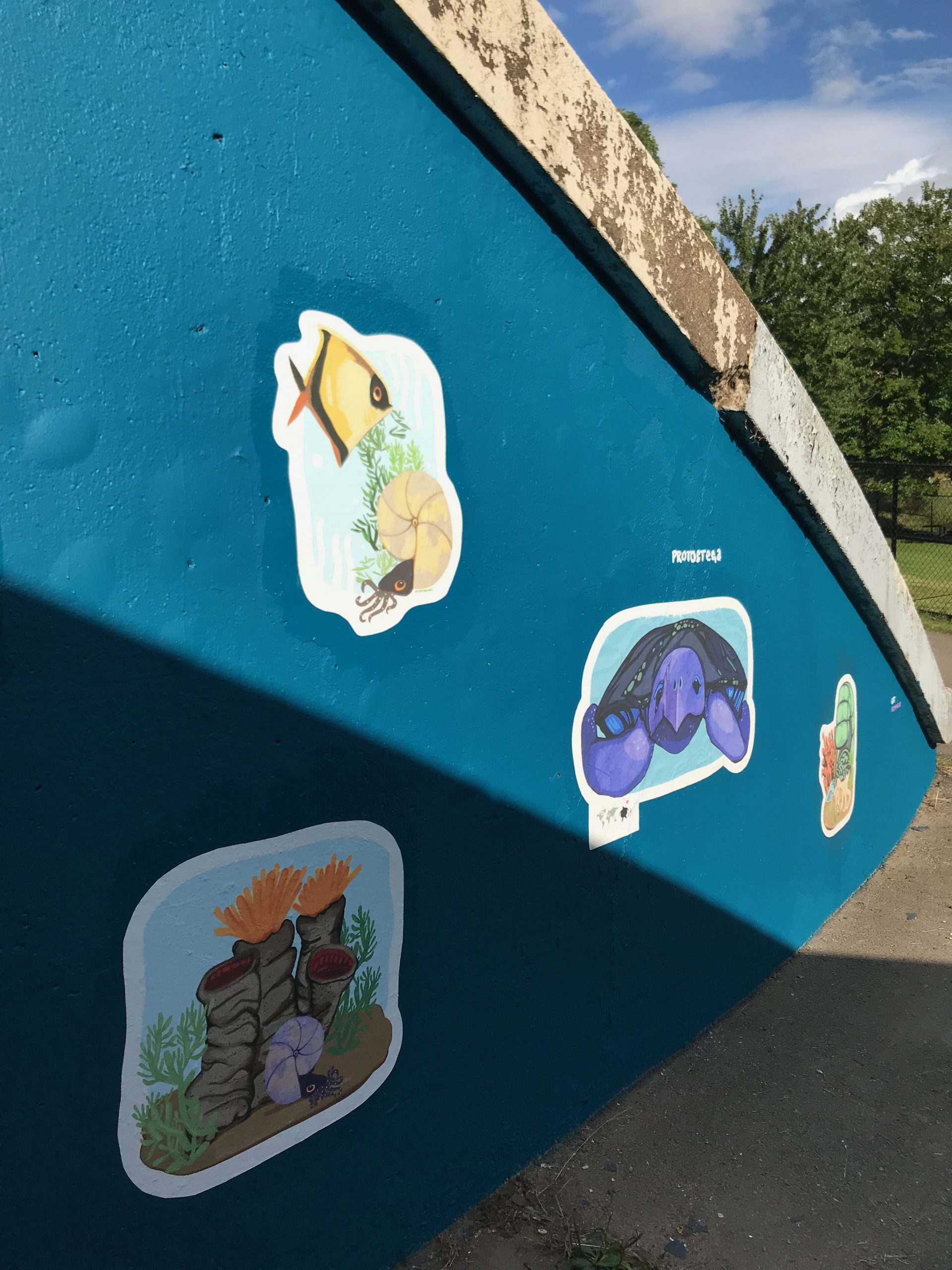 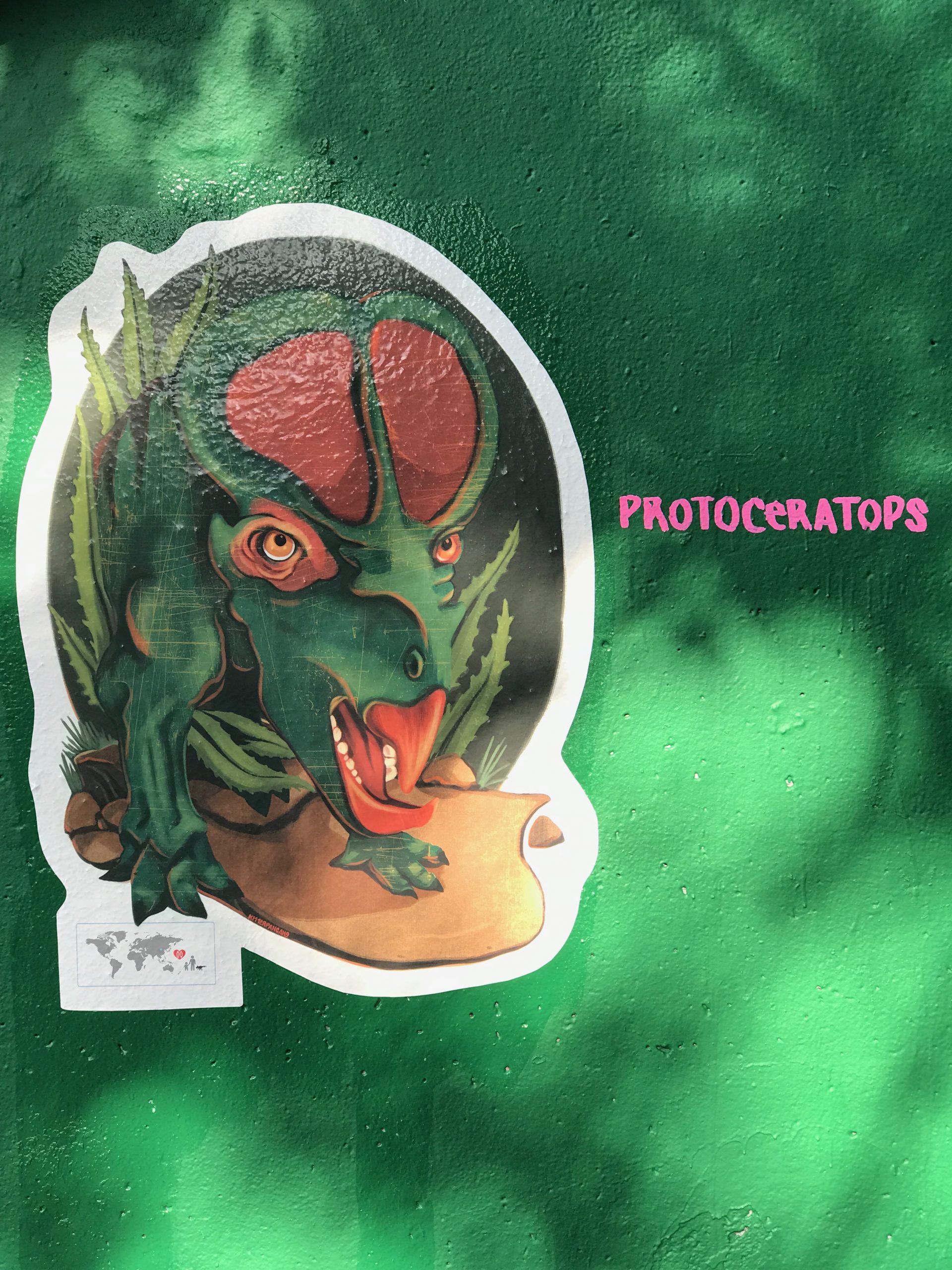 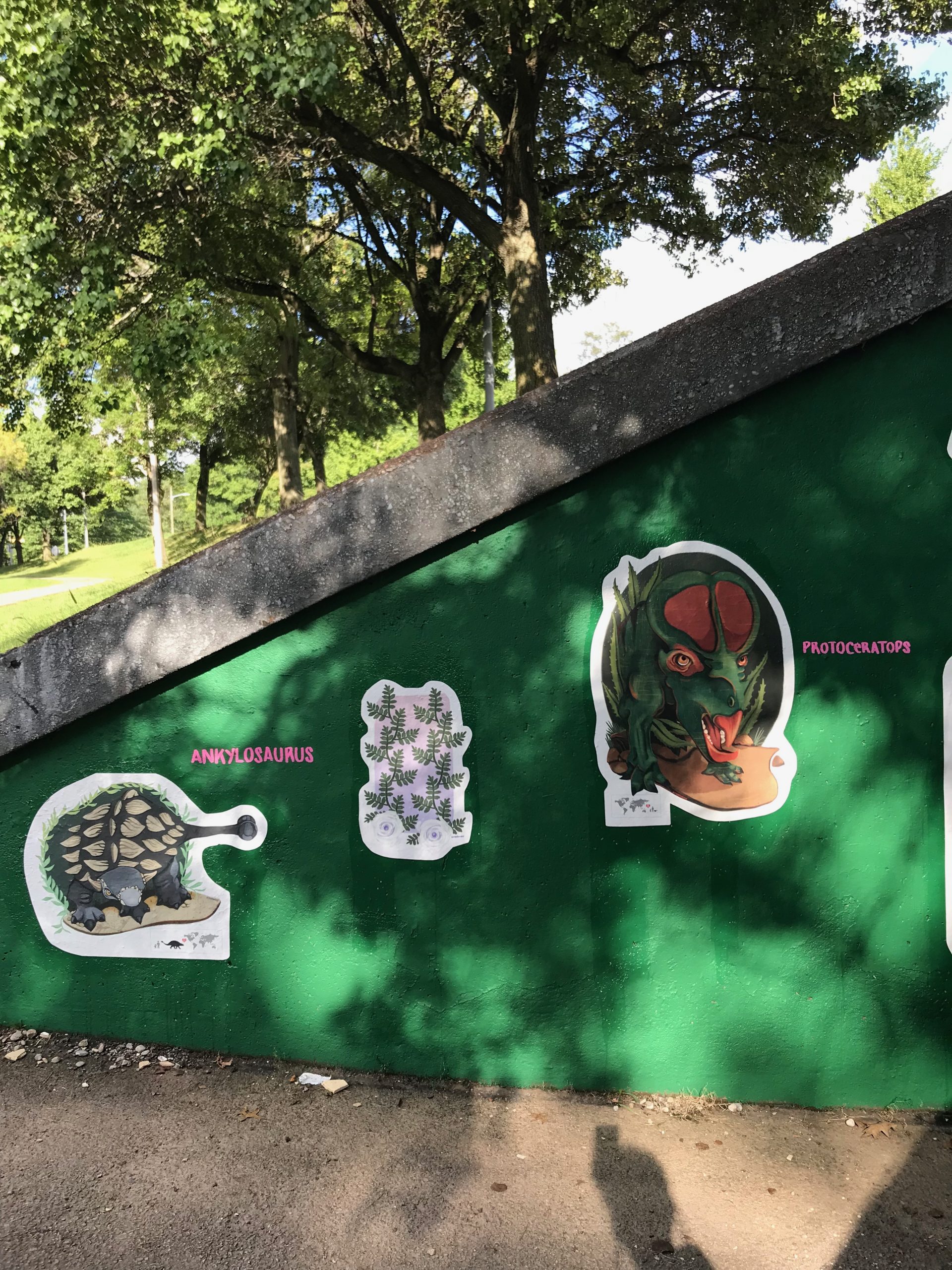 The Big Dino Sticker Pack marries play and education using illustration. Twenty-six large stickers featuring dinosaurs, ancient plants, and bugs adhere to painted concrete. The hand-drawn illustrations are printed on Alummi-flexx. Located in the entrance of a pedestrian underpass, the space is a portal between a playground and pool in Schenley Park, Pittsburgh.

The pool side of the underpass incorporates ancient marine life (blue background) while the playground side features land creatures (green background). With a white boarder around each image these oversized stickers appear as if they were peeled from an oversized sticker sheet.

The Public Art and Civic Design Division of Pittsburgh’s Department of City Planning intentionally invited local artists to create public art interventions in a variety of locations across the nine city parks in the city. The city crafted a simple request for proposals, asking artists to “activate the space utilizing themes of health, play, active learning, or neighborhood identity.” The hope was to encourage a variety of local voices to contribute in a meaningful way in spaces to which they themselves have a connection—and give them a workable budget to do this. It creates a sense of civic contribution and ownership.

After my proposal was accepted and I completed some light paperwork, I was left to my own devices to execute the project. This was a huge benefit as there was a clear plan in place but I was able to take ownership of my project in an efficient manner. During my research phase, I painted in my sketchbook—planning the images that are now installed in the park. I invited the public to come and give input on what dinosaurs they would like to see. It was a collaborative effort that made the project even more community conscious and frankly really fun.

Under each dinosaur there is a small key that details without words where the dinosaurs where found, what they liked to eat, and how large they are compared to the average human height. Many park visitors' primary language is not English and so the graphics can educate without text.