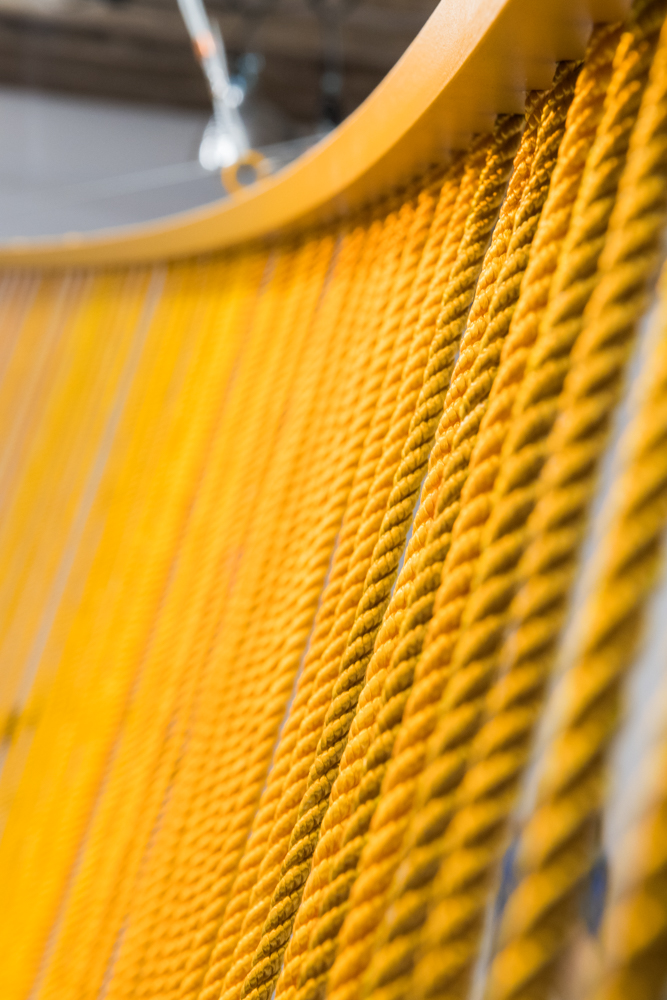 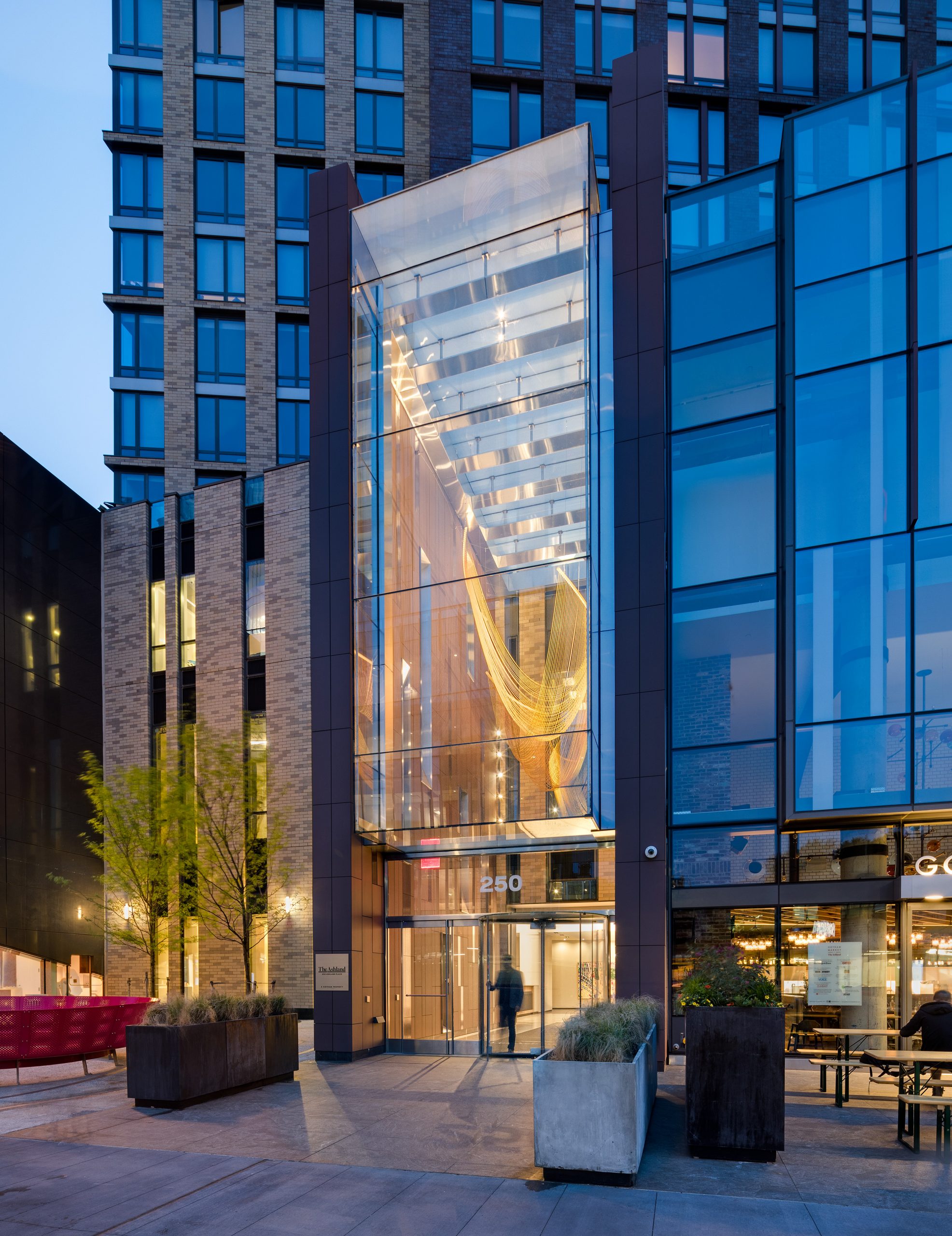 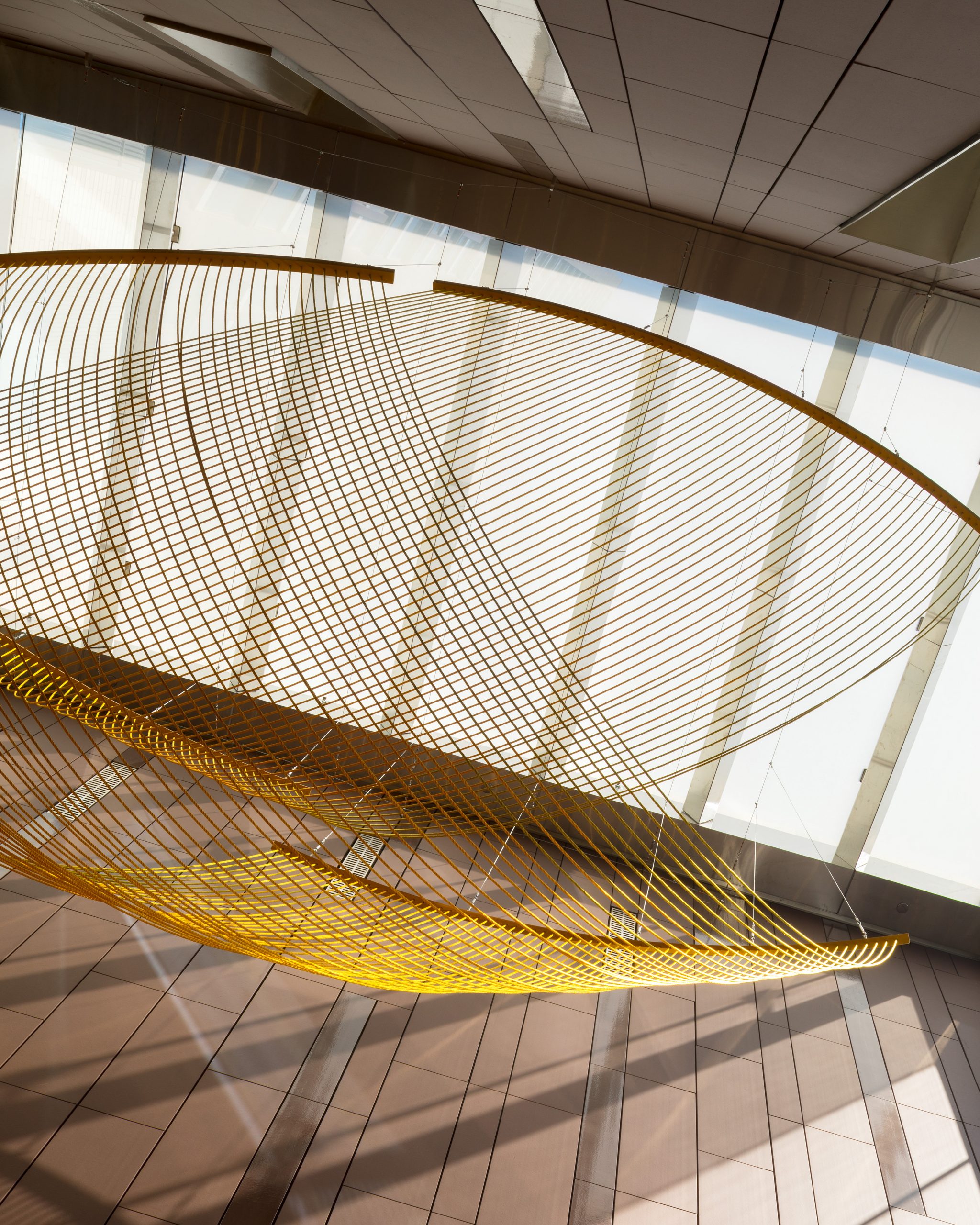 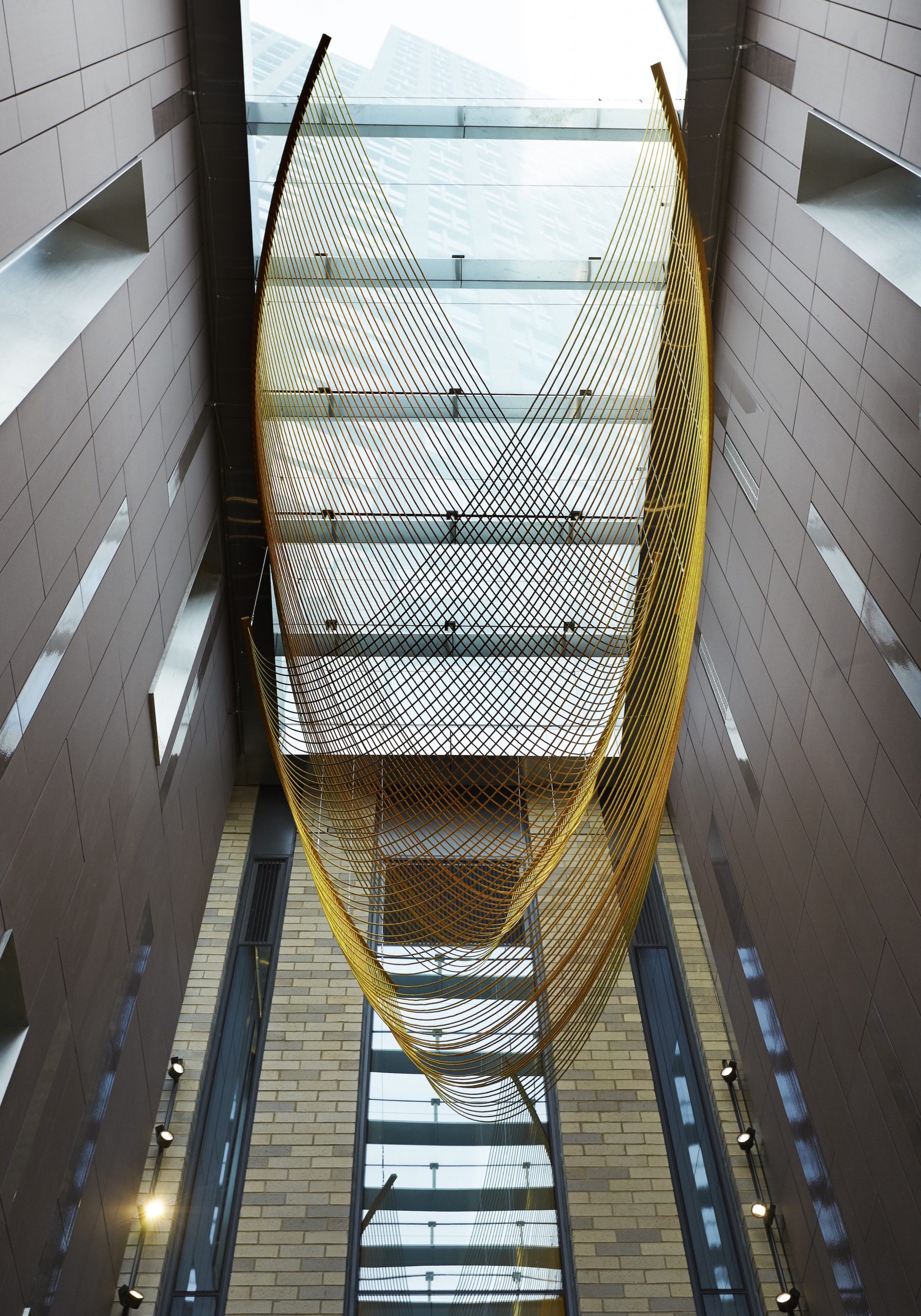 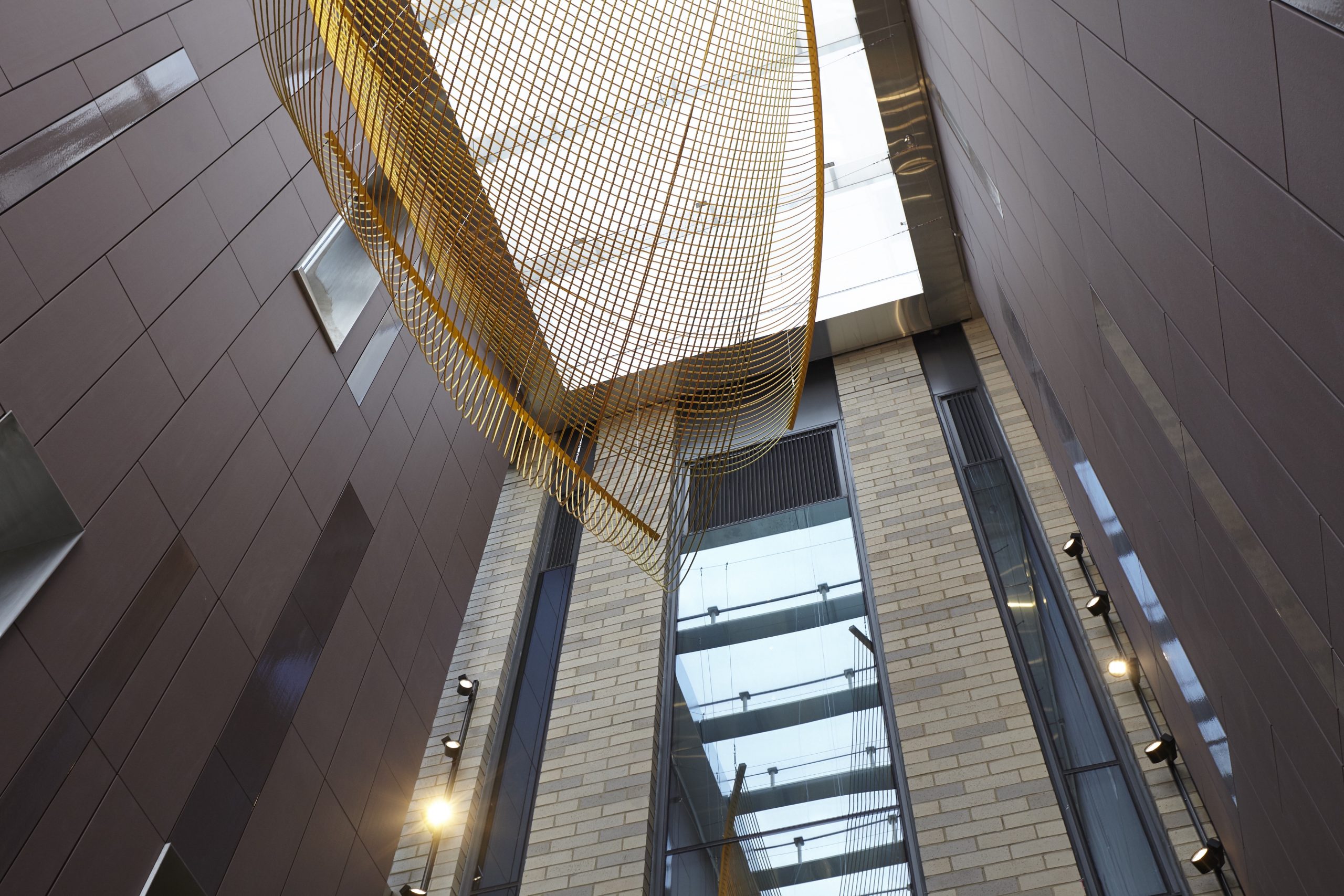 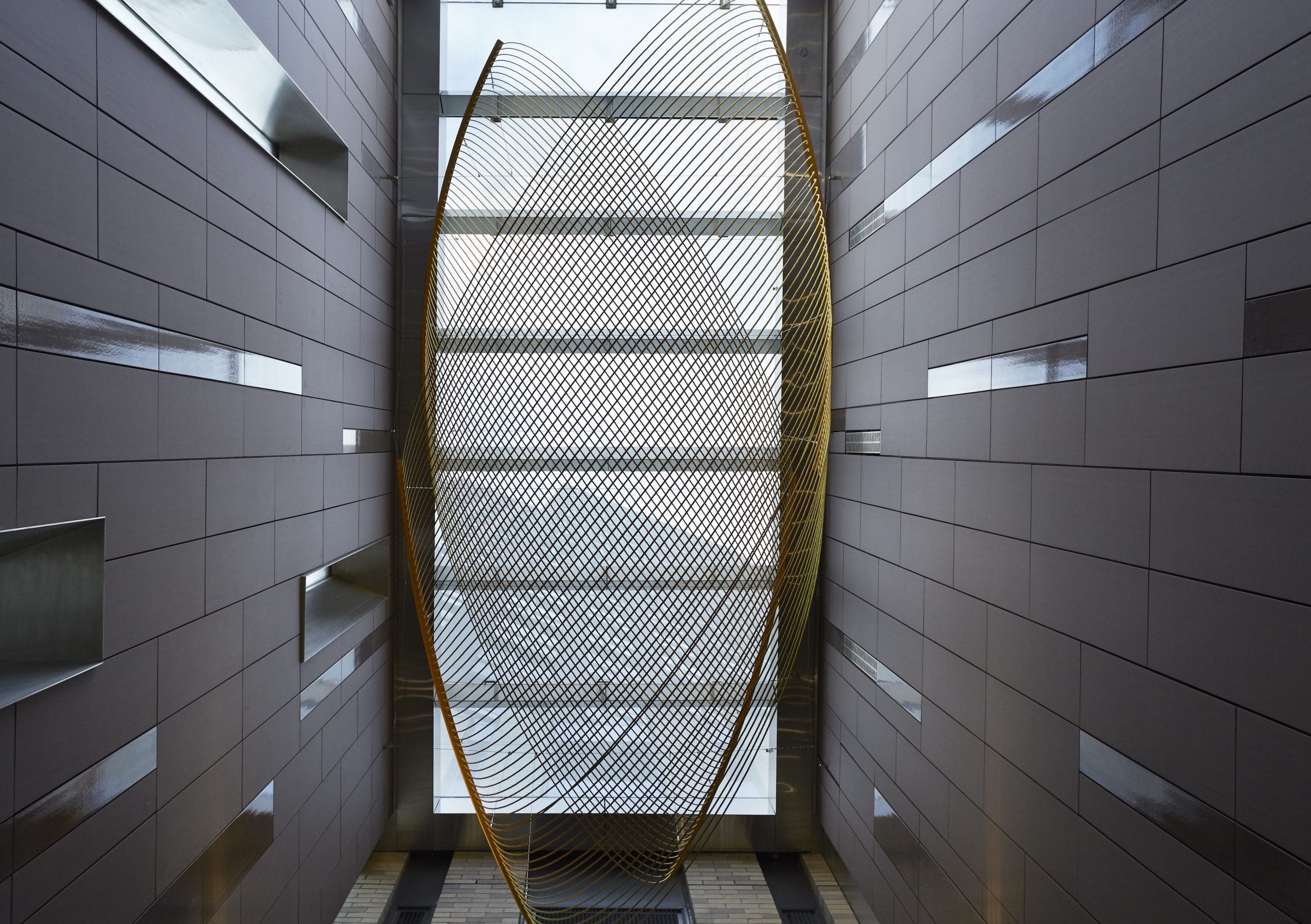 Rachel Mica Weiss’s “Inverted Arches in Gold” is an immersive installation composed of two lilting arcs in shining gold nylon rope. By inverting the classical architectural arch and introducing it into a rectilinear interior of industrial materials, Weiss fuses two architectural styles. Both volumetric and diaphanous, “Inverted Arches in Gold” hovers like a cloud within the building’s walls. As residents explore the work from multiple angles, they become aware of their own temporal experience: the golden rods of rope tick past, progressing and regressing with one’s passage through the atrium and into the building.

The Ashland is very art-heavy. You can see it in the details of every surface, from the mosaic tiles in the lobby to the art hung on its walls throughout the building. "Inverted Arches in Gold" came about when aiming to amplify the effect of the art's surrounding architecture. In this case, the mirror behind the work, and its position in a glass column of sorts, allowed it to function like a shining beacon in the space. We also wanted the piece to consider the ways that pedestrians would move past it on the street, and underneath it while entering the building. The piece changes as one moves around it, and even offers a view from above for certain tenants. We thought every view should be different, and that circumnavigating the piece should be rewarding; its moiré effect makes it seem as if the ropes vibrate and shift as one moves underneath it.

Gotham Organization and Uprise Art, the art advisory who sought out the artist, Rachel Mica Weiss, for this project and curated the entire Ashland collection, worked with us in the development of this piece. SPAN had a vision of the interior architecture and how it could engage the public, given the building's proximity to several prominent arts and cultural institutions. Weiss proposed a few initial ideas, which we then collectively refined according to the interior design scheme of the space and the needs and limitations of installation. Even the contractors on site helped with a very challenging overnight installation in an extremely narrow and tall space, deftly maneuvering the lift and hanging the artwork as Weiss directed from the ground.

Inverted Arches in Gold was the inaugural work in what grew into a much larger series of Arches. Works which invert the ever-present classical, Romanesque arch, reinstating it in contemporary architectural spaces. This project, and the willingness of all involved parties to go on faith and give Rachel Mica Weiss the freedom to create a new type of work, sight unseen, allowed her to push her own artistic practice forward. The next iteration of this work will be for the Pittsburgh Airport, to be installed in late 2019.