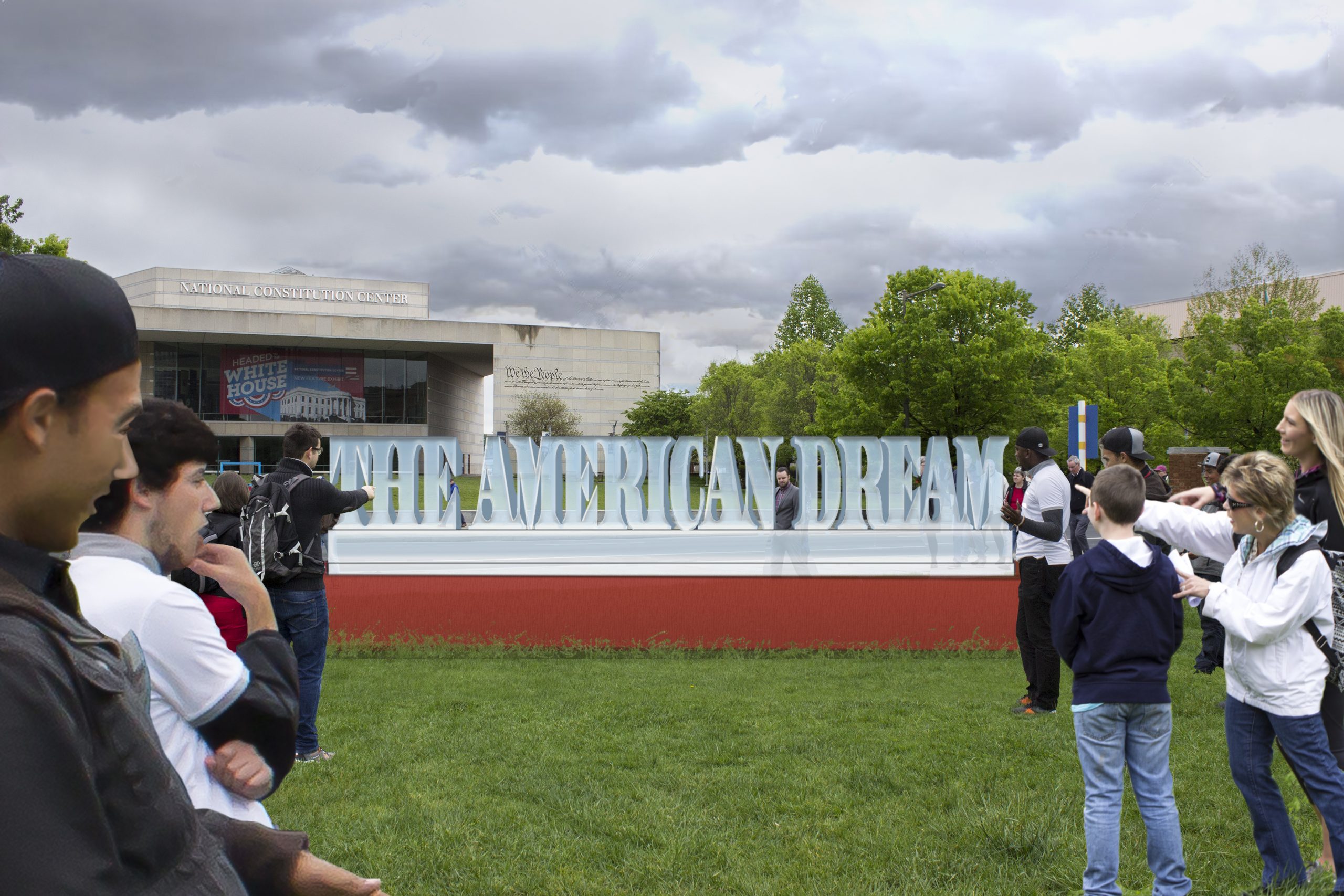 We melted The American Dream during the Republican and Democratic conventions. This enormous sculpture in ice weighing over 4,000 pounds disappeared in less than 6 hours highlighting the erosion of opportunity and social equality. Melting one of the central tenets of postwar America suspends disbelief. As the sculpture wept through its transformation, the action compelled people to bear witness to ideas and concepts they may only subconsciously feel.
The installations in Cleveland and Philadelphia further expand our work in developing and integrating public sculpture with social actions, using digital media to amplify its meaning and message.

In this immaterial age, the medium of ice seems like the perfect material for sculpting the impact of seemingly invisible, yet strongly felt forces at the beginning of the 21st century. We embrace this idea creating ice sculptures, which we call “temporary monuments.”

The impact of politics cannot be divorced from culture or art any more than the impact of art or culture can be divorced from politics. We develop artworks to further public discourse about civic and socio-political issues — inviting the viewer to participate in their work. Our installations provoke conversation, engaging the public to question the world in which they live.

We install site-specific sculptures carved in ice on location during national events in the United States imbuing the sculptures with the political theater of the moment. In 2008, we unveiled large ice sculptures of the word Democracy at the political conventions in Denver and St. Paul. On the 79th anniversary of the Great Depression, we erected an ice sculpture of the word Economy in front of the New York State Supreme Court in Foley Square. And in 2012 we installed the word Middle Class at the Republican and Democratic National Conventions in Tampa and Charlotte, respectively.

Nora Ligorano and Marshall Reese have collaborated together as the artistic duo LigoranoReese since the early 1980s. Their work is an ongoing investigation into the impact of technology on society and the rhetoric of politics and visual culture in the media. LigoranoReese's body of work is multidisciplinary and includes limited edition multiples, videos, sculptures and installations which involve a range of unusual materials and industrial processes.

Having exhibited widely throughout their prolific career, LigoranoReese’s most recent solo exhibitions include 50 Different Minds at the Portland Art Museum in Portland, Oregon and If You Lived Here at the Massachusetts College of Arts in Boston, Massachusetts in 2012. In 2014, their work IAMI, a multi-media, interactive, fiber-optic tapestry was the subject of a media room installation at Catharine Clark Gallery. LigoranoReese’s work can be found in the permanent collections of numerous institutions, including the SFMOMA, The New York Public Library, the Whitney Museum of American Art, and The Getty Institute. LigoranoReese live and work in Brooklyn, New York and have been affiliated with Catharine Clark Gallery since 2010.