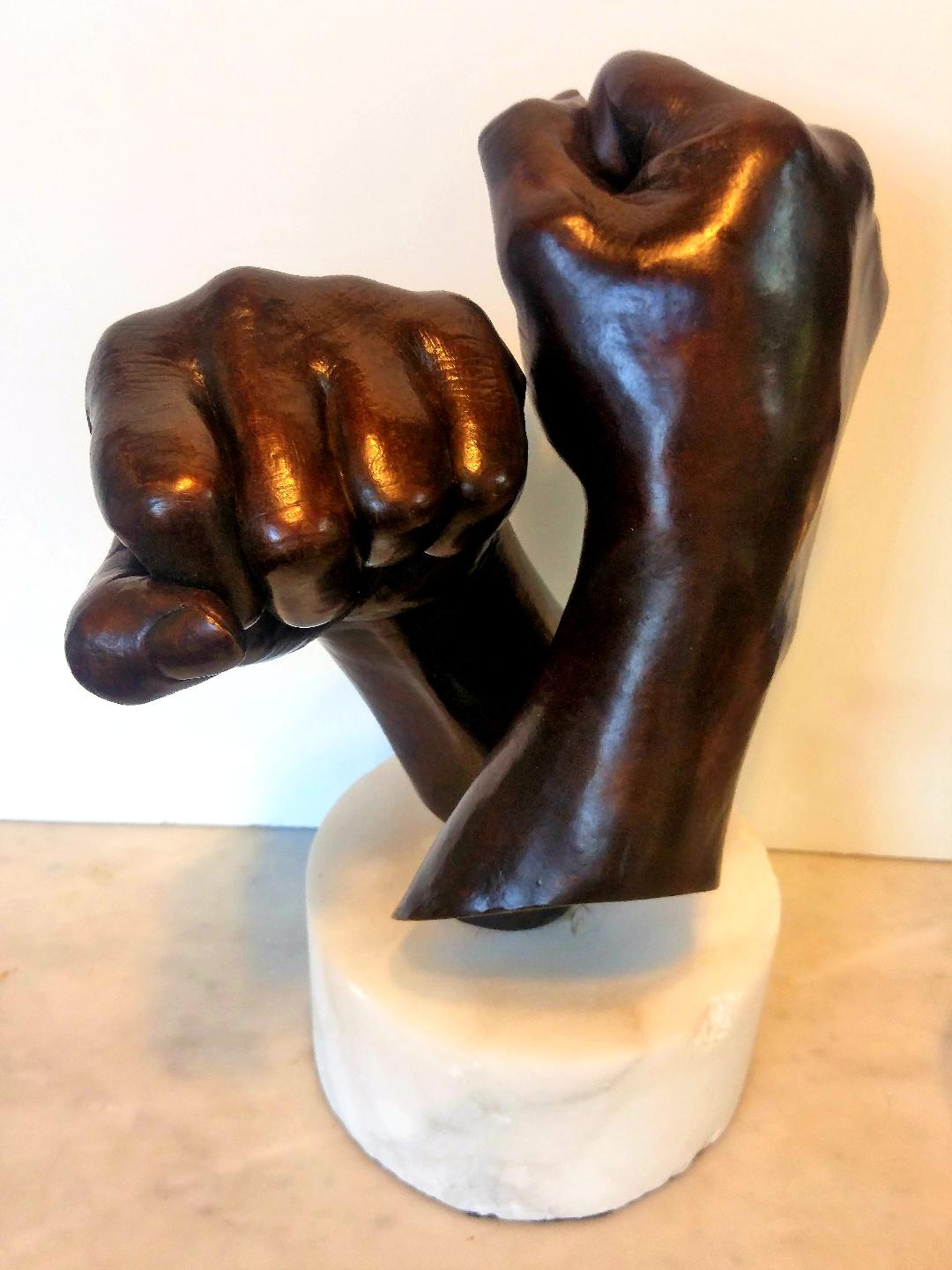 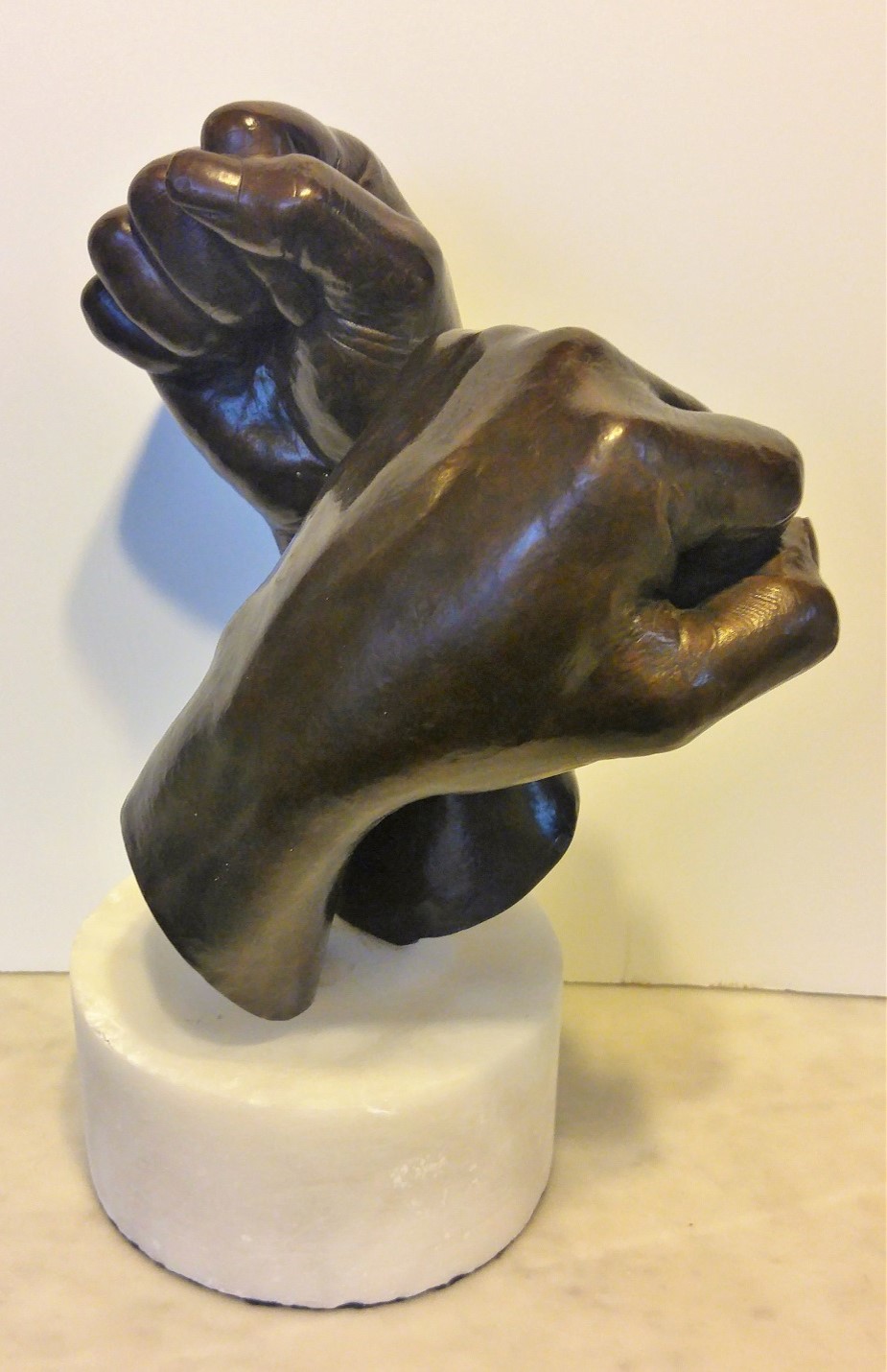 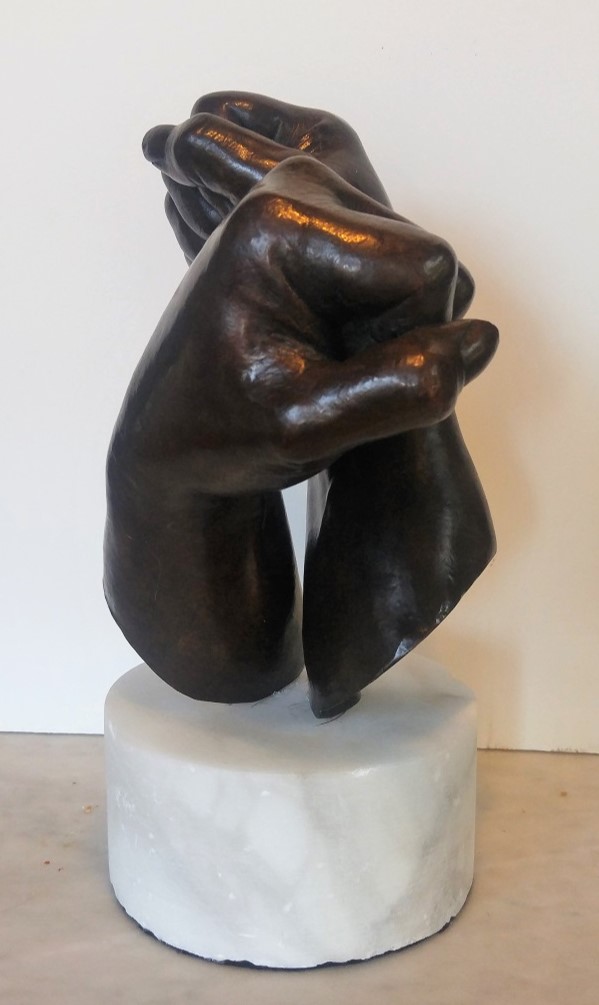 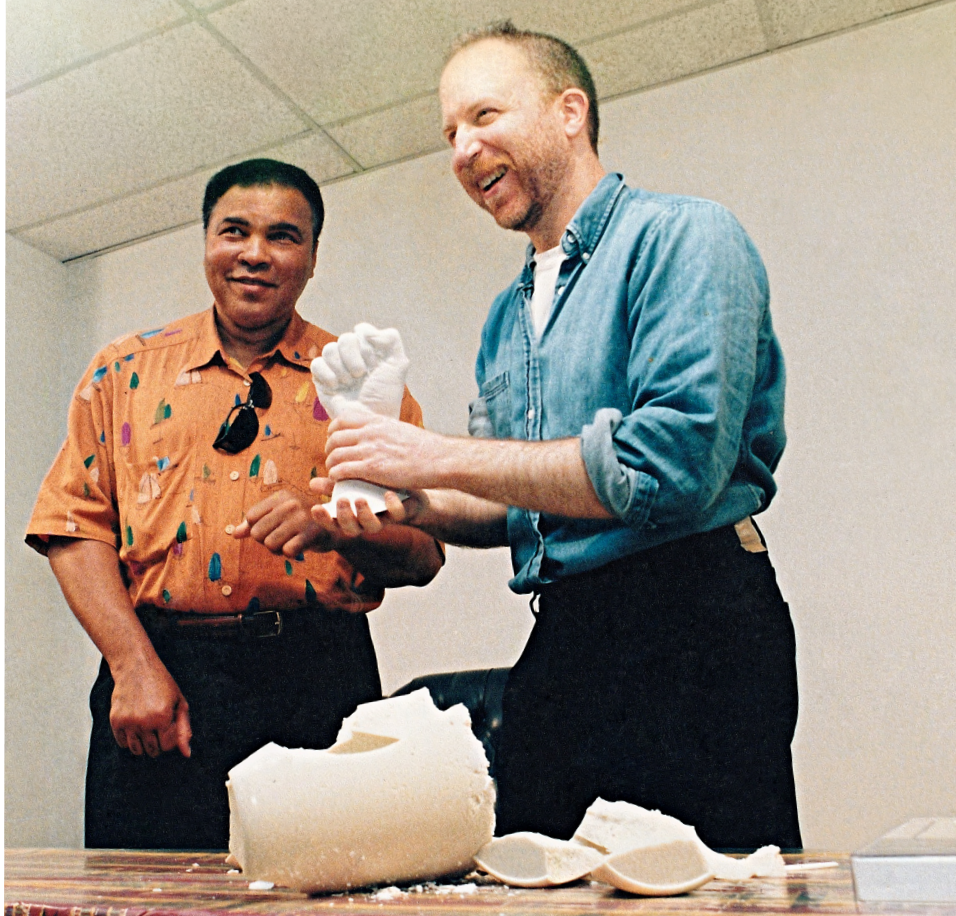 Muhammad Ali’s iconic life-cast hands in bronze, unveiled as work of art and sculptural symbol for the time – maquette for large 6′ public sculpture

A limited edition from the only ever, full set of life-castings of Muhammad Ali’s hands have been transformed into a contemporary work of art, titled “Strength and Resistance,” benefitting UNICEF

In 1998, Muhammad Ali asked artist Elliott Arkin to produce a set of life-casts of his legendary hands. The resulting plaster originals are the only complete three-dimensional replica and historic document of Ali’s monumental hands in existence. Arkin was familiar to the champ from his earlier designs for Ali’s non-profit initiative, World HeALIng Project promoting peace and understanding.

In 2021, Arkin was asked to revisit the life-casts, to rework and transform them into a very limited-edition sculpture for fundraising purposes. Arkin has created a contemporary work of art reflecting on our time, while honoring Muhammad Ali’s iconic life as an athlete known as the Greatest Of All Time, and activist who championed human rights around the world. According to the project’s website: “The work’s subtle yet powerful design of intertwined, graceful forms fully presents Ali’s unique combination of beauty, strength, cleverness and character.”

Limited edition of only 20. Each set of hands/sculpture is from the earlier 1998 bronze castings produced from the one-of-a- kind plaster original and includes the signatures of both Elliott Arkin and Muhammad Ali plus, the unique edition number.

Each sculpture is created from an original bronze casting produced in 1998, re-worked, re-patinated, and redesigned on a marble base. Includes signatures of both artist Elliott Arkin and Muhammad Ali, and individually re-numbered #/20

The bronze Life-Cast composition for Strength and Resistance is the original maquette for an enlarged 6' version. Also included on the Strength and Resistance website is the essay titled “The Greatest” by Robert Storr, former senior curator in the Department of Painting and Sculpture at the Museum of Modern Art, NY and Officier in the French Ministry of Culture. Storr writes: “From the Renaissance on down sculptors were called upon to make ‘life casts’ of notable and/or exceptional well-proportioned people, much as Elliott Arkin was asked to make molds directly from the hands of the most extraordinary boxer of modern times. Their purpose was to gather the best parts of the most beautiful men and women of their age and from those parts fashion an ideal composite… Those are my memories and my reasons for respecting Muhammad Ali. Others will have their own. These fists are not a shrine or an altar to his prophetic life – such idolatry had no place in his own religious observances – but they will concentrate anyone who looks at them on the firmly grounded yet in all other respects unfettered and superlative human being of which they are emblematic.”