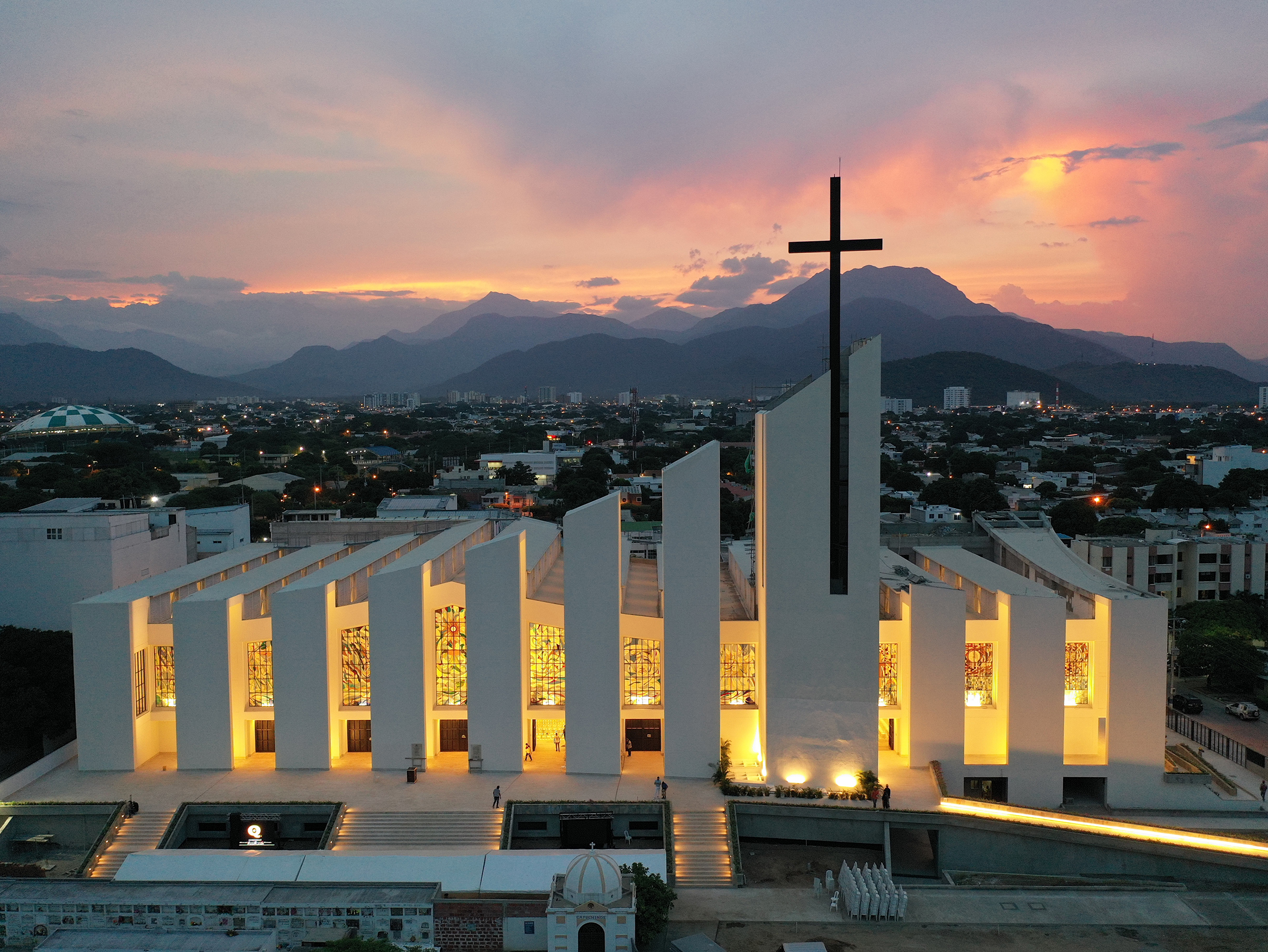 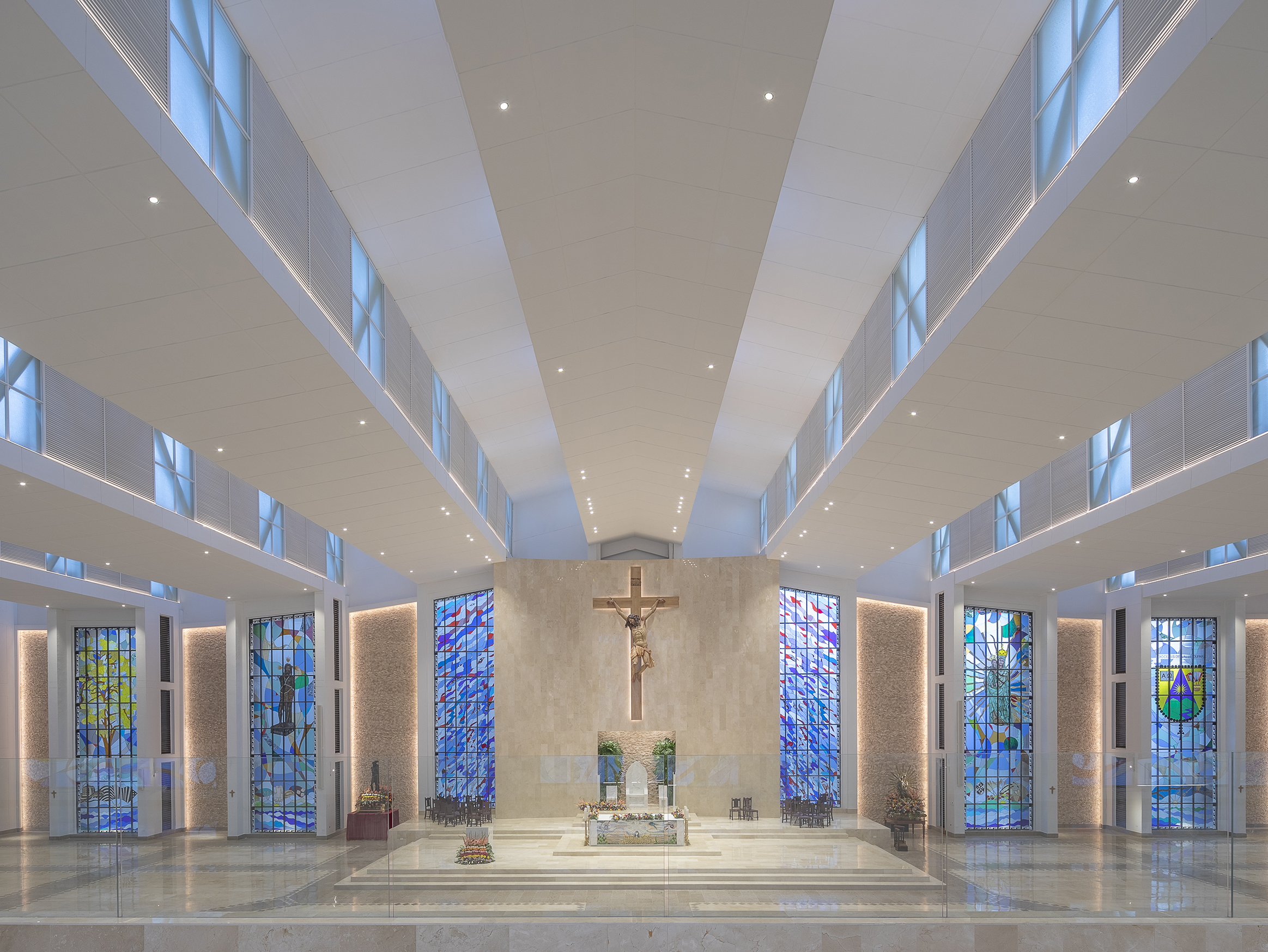 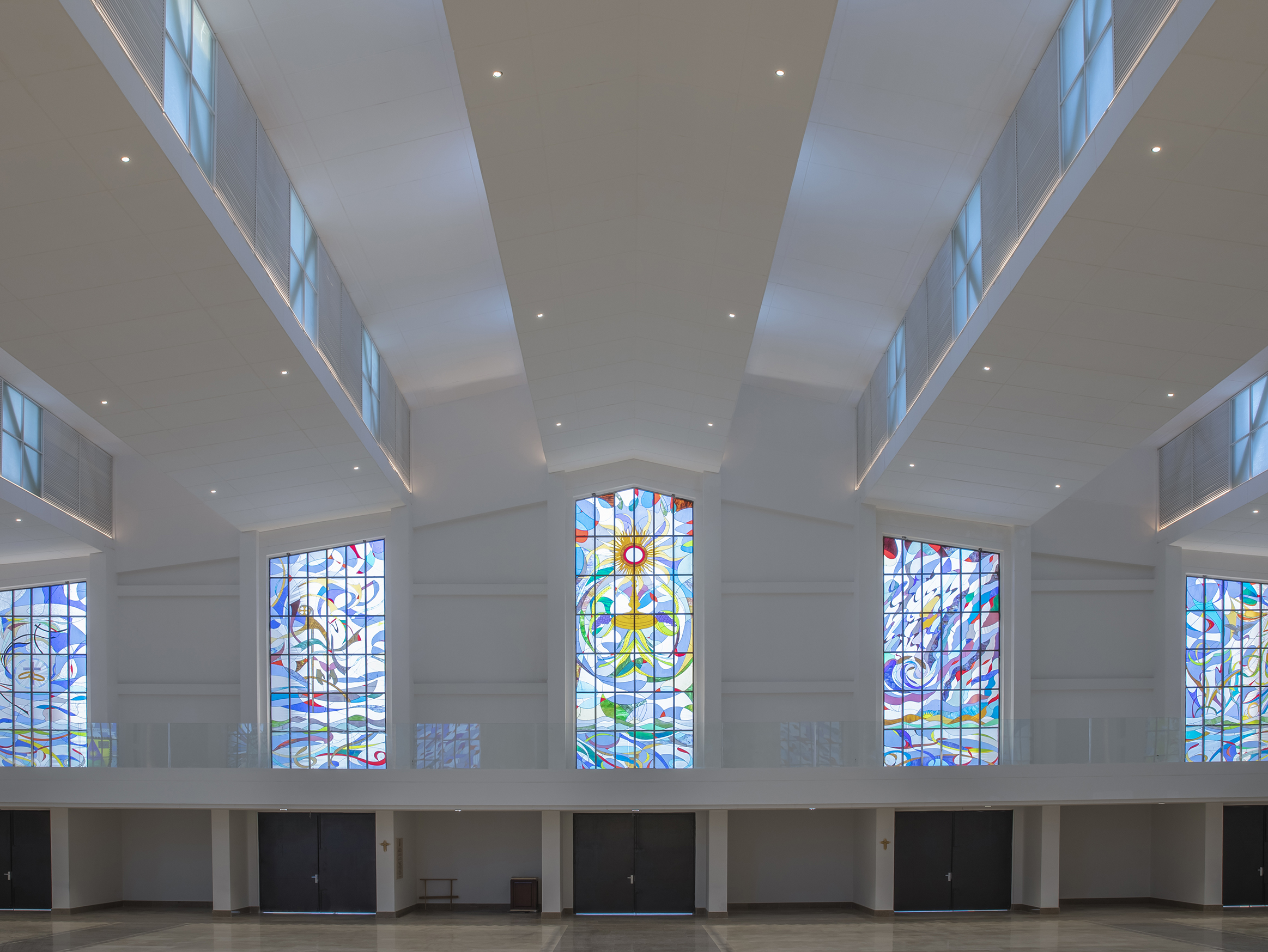 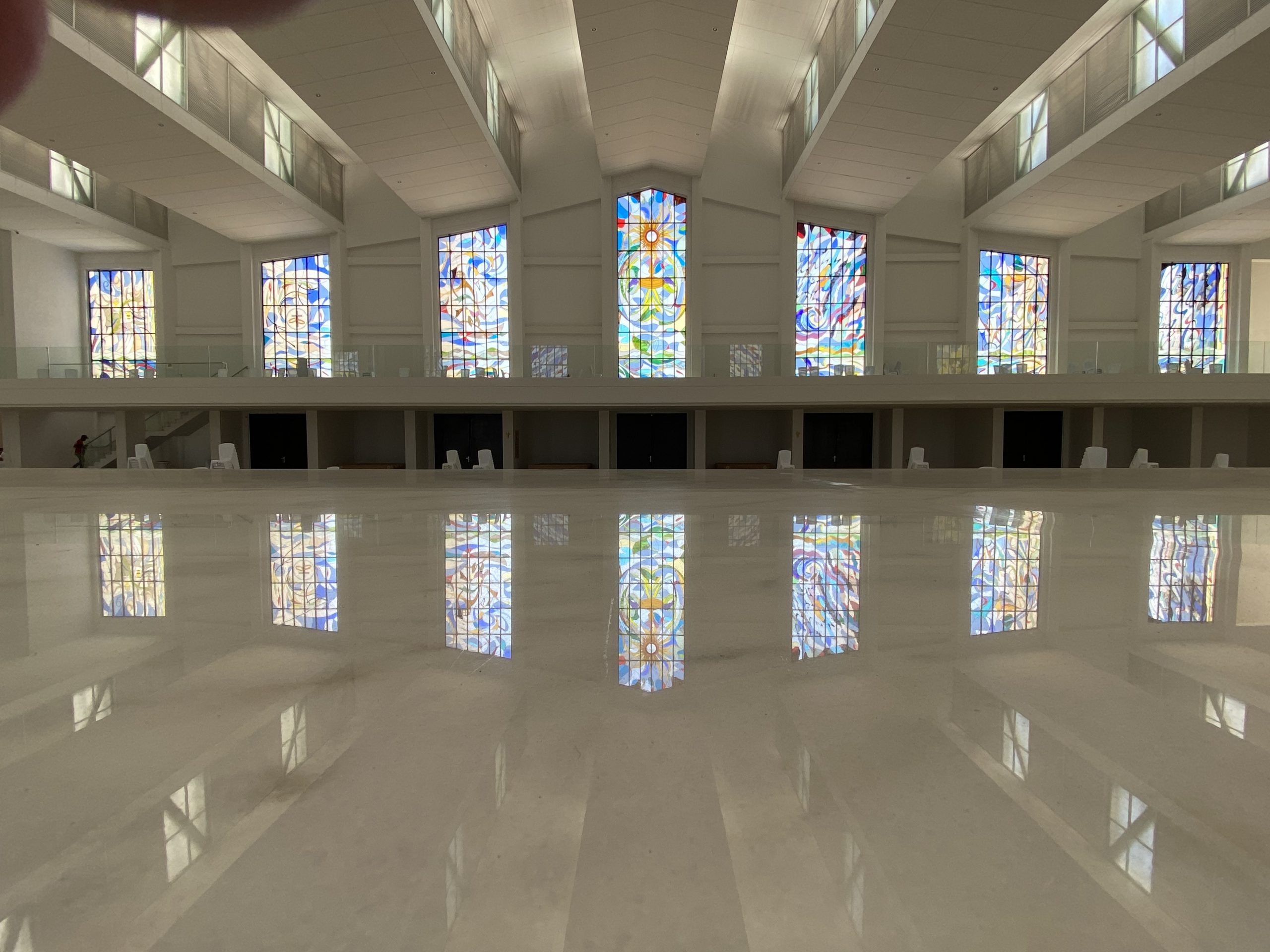 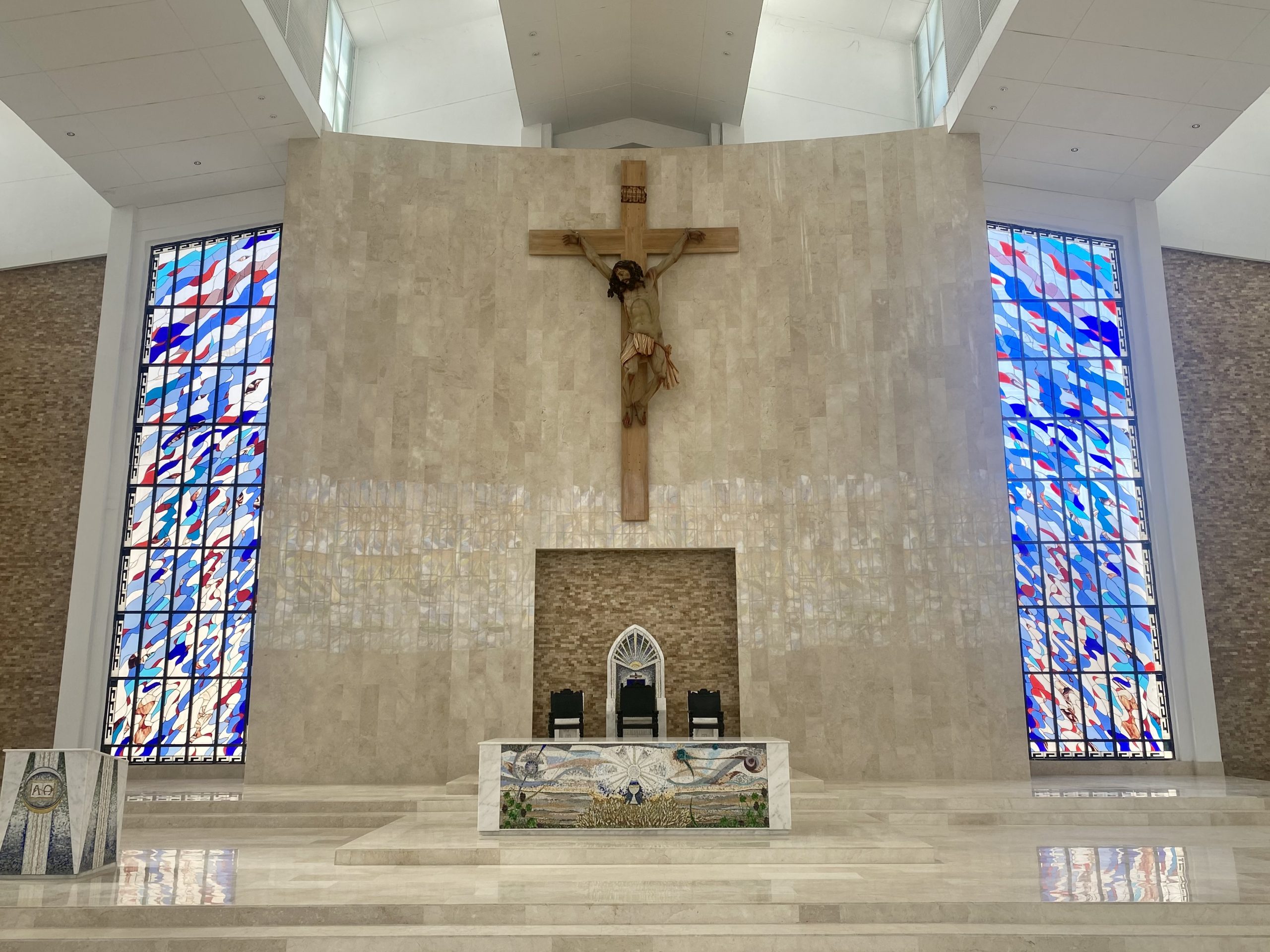 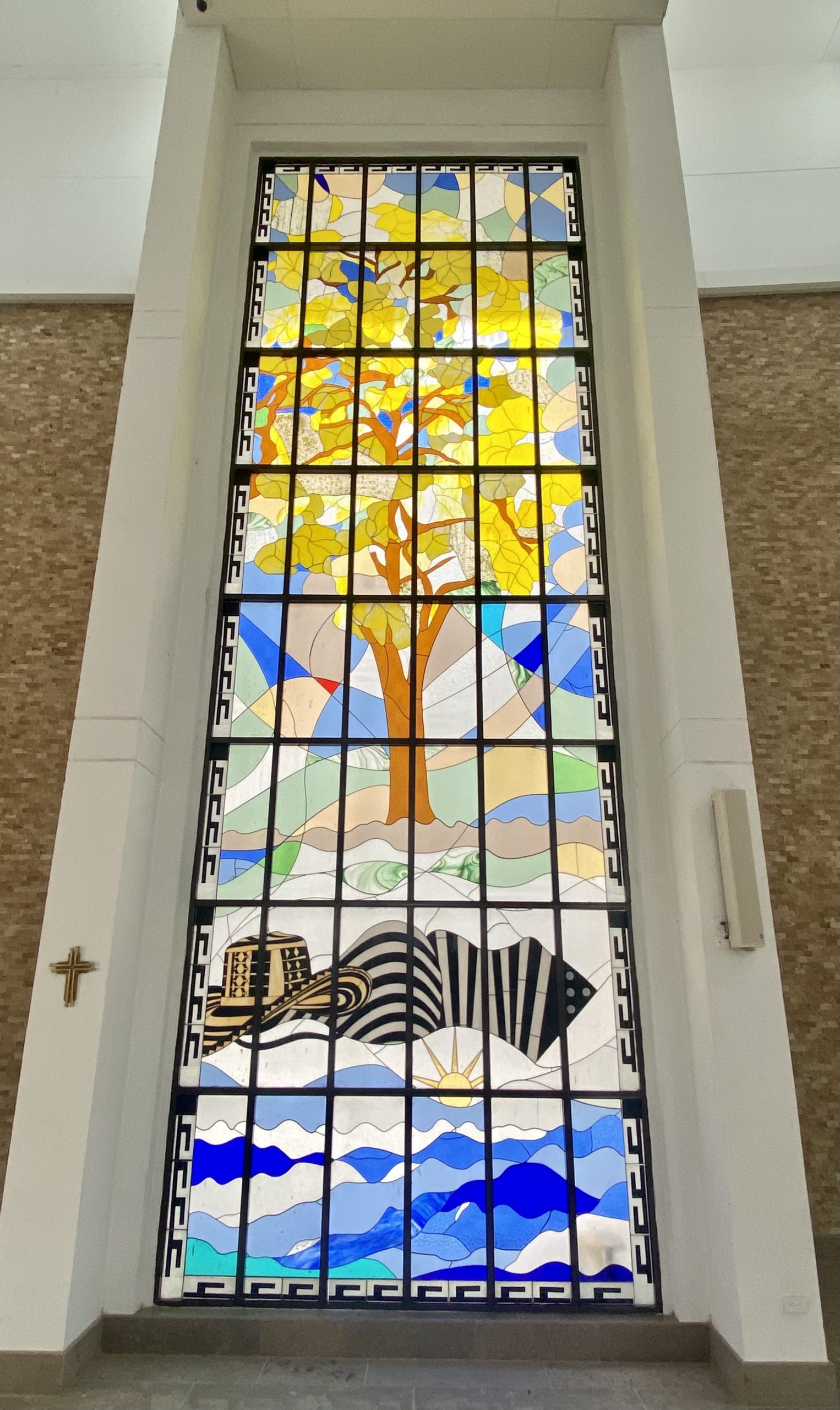 I have loved challenges my whole life and this was the biggest… It wasn’t really easy at all and now, after I finished the project I think that being a part of history in some way it is really satisfactory for any artist… at least I feel very happy. The whole project has twenty windows with around 800 sq mts. (8611 sq ft), made through stained glass and fused glass, plus a large hanging glass installation 6.5 mts ( 21 ft) for the Baptistery. The front facade has 10 windows, seven are dedicated to the seven sacraments and the other three are the holy trinity. The lateral facade are four windows accompanying the holy chapel and the other six windows for the rear facade are the biggest and related to the story, the customs and the legends of the city where the Cathedral is being part of: Valledupar the world’s capital for the Vallenato legend.

To design stained glass windows for a Cathedral is a privilege and a real challenge then the goal at the beginning was to set up a complete project as an integral part of the most modern Cathedral in the whole Colombia; The first goal was to create a design with a liturgical meaning and at the same time being part of the architecture of the place.
Plus part of the goal was giving to the design a whole concept without letting any window left behind then I thought something important for the region: the city is surrounded by many rivers so that was my first link to start giving life to the project: water... plus water in the liturgical language means the way the religion starts life through baptism and this fact starts with the first window of the principal facade added to the architectural design that Christ's life towards the cross, as people can see the ascending path to it in the facade; water is present in every window then the main reason the whole place has blue as an important component within the whole .
Within the project there are other common points eg: the frame inspired in the aboriginal communities, customs, the vallenato legend, the most representative plant The Cañahuate tree that usually covers the whole region with an intense yellow.

The most important part to me was to understand what was the client's mind about the religious content ( The Diocesis of Valledupar), then after having a first meeting with the architect and designer of the Cathedral I knew the architectural needs and then I needed to know about the liturgical part, and I had a two hours meeting with a priest who was the manager of the construction, his name Iver de La Cruz, after talking to him I thought I got it, I understood what where their concerns and their needs so I told him give me a month, however after that month I didn't like my proposal and I changed the whole project and after a while, one and a half month more, I finished my designs and I traveled to display what I believed it would be the better for the Cathedral. I had a meeting with 11 people, Engineers, architects, Priest and the Bishop of the Diocesis. They liked my proposal and after a process with some others stained glass artists from Colombia, I was the winner.
I wouldn't finished this big project without having a great team assisting me and sharing a big challenge in first place my coworkers and then The Architect and designer, the appointed Architect on site, the Engineers, and many others.