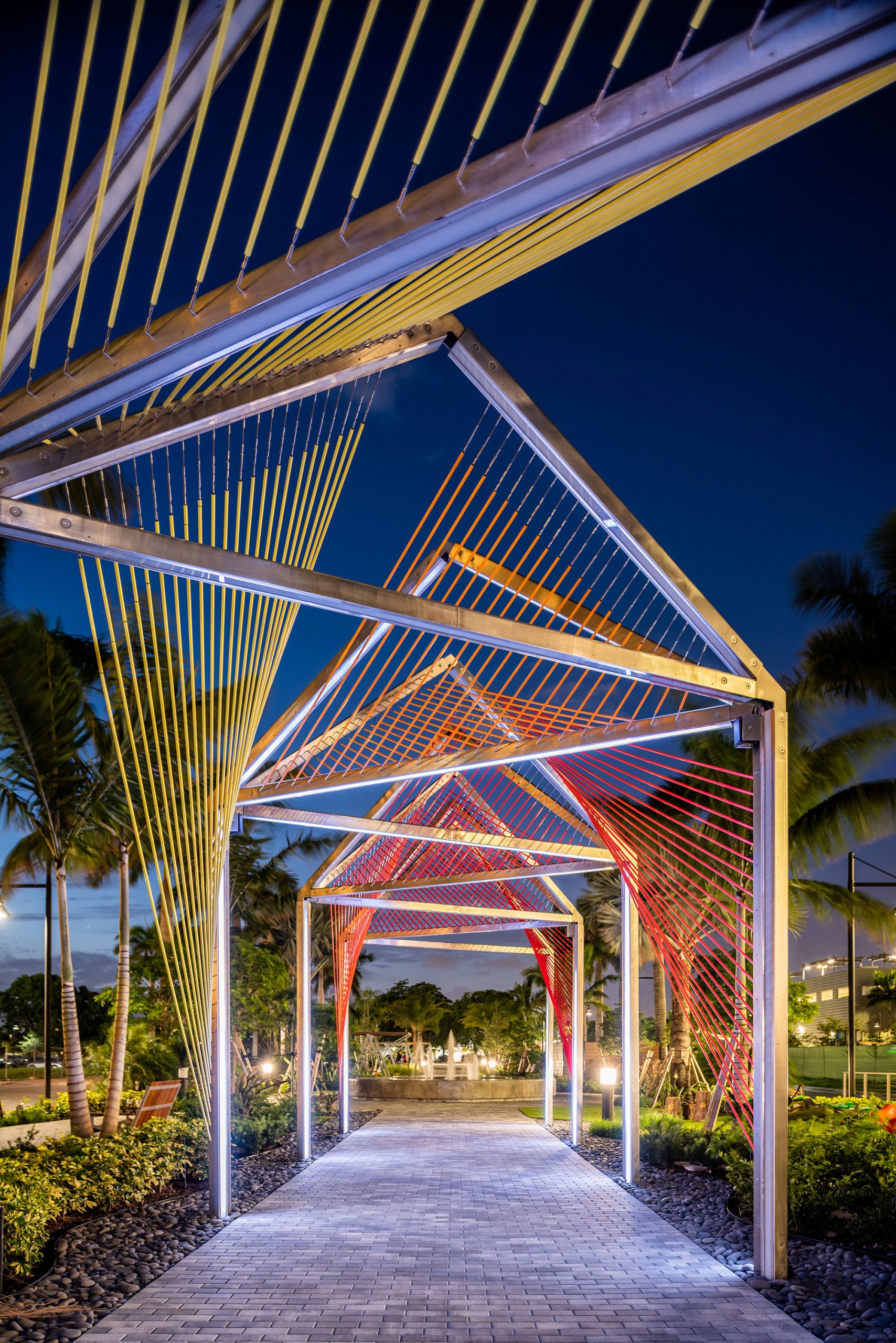 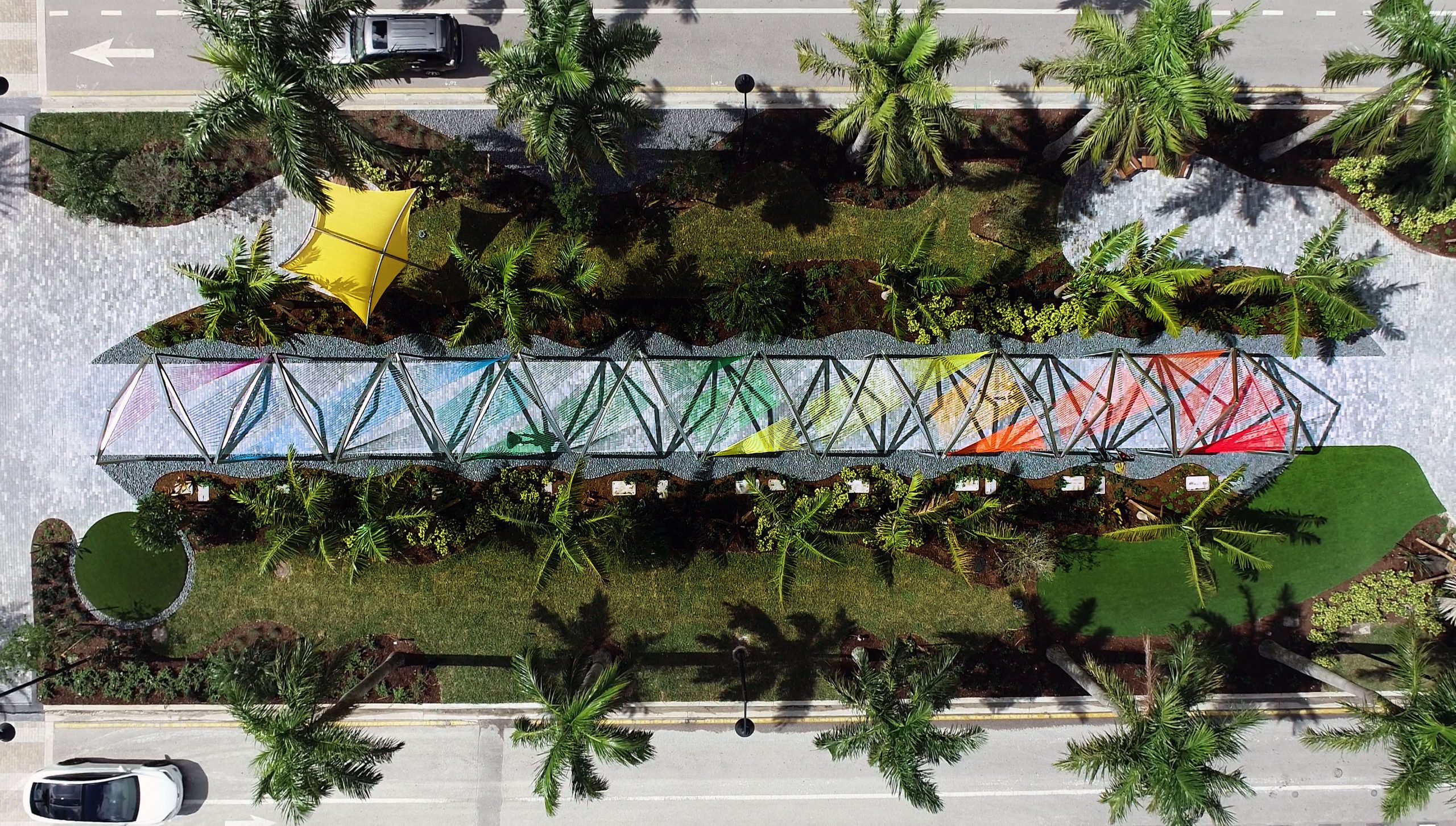 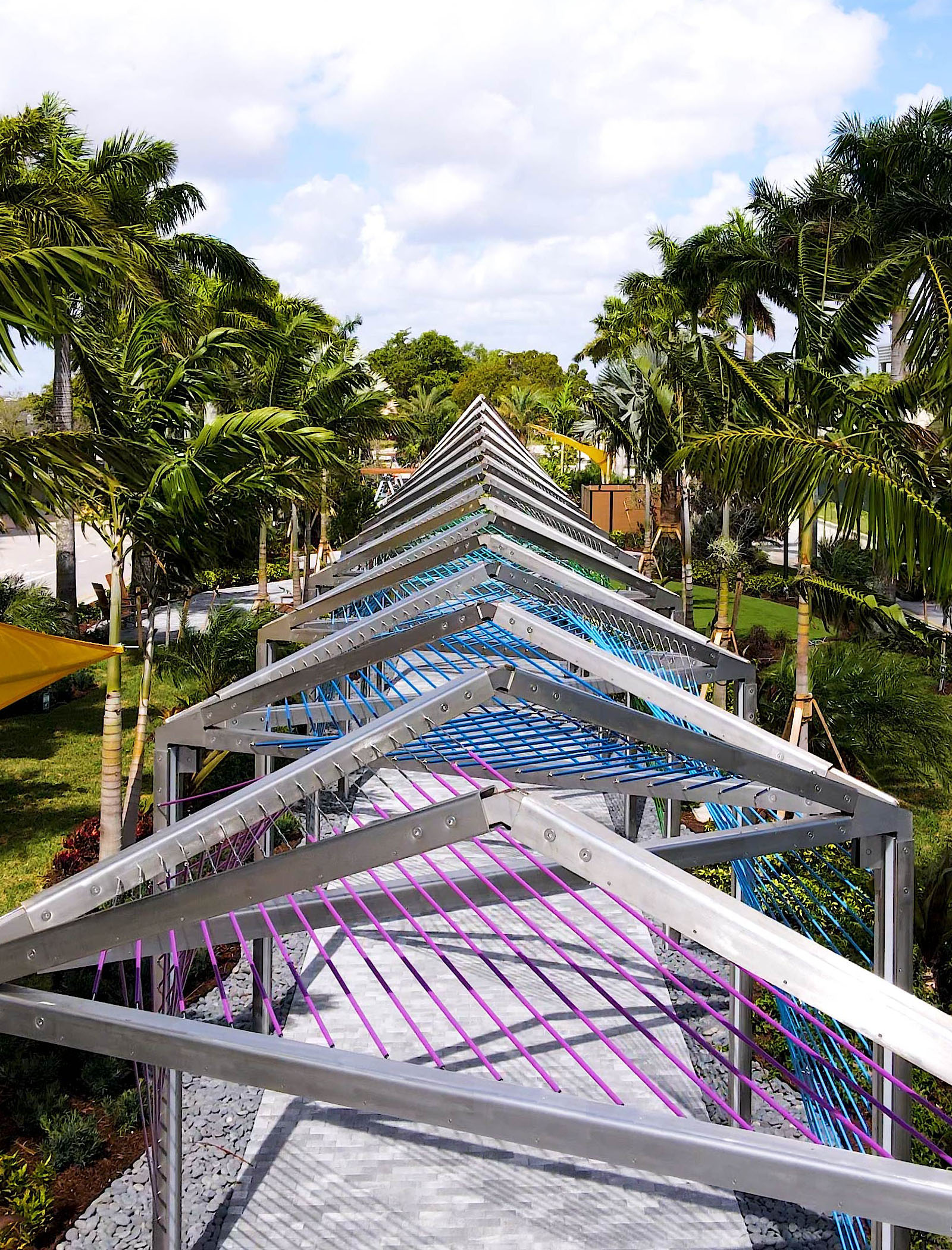 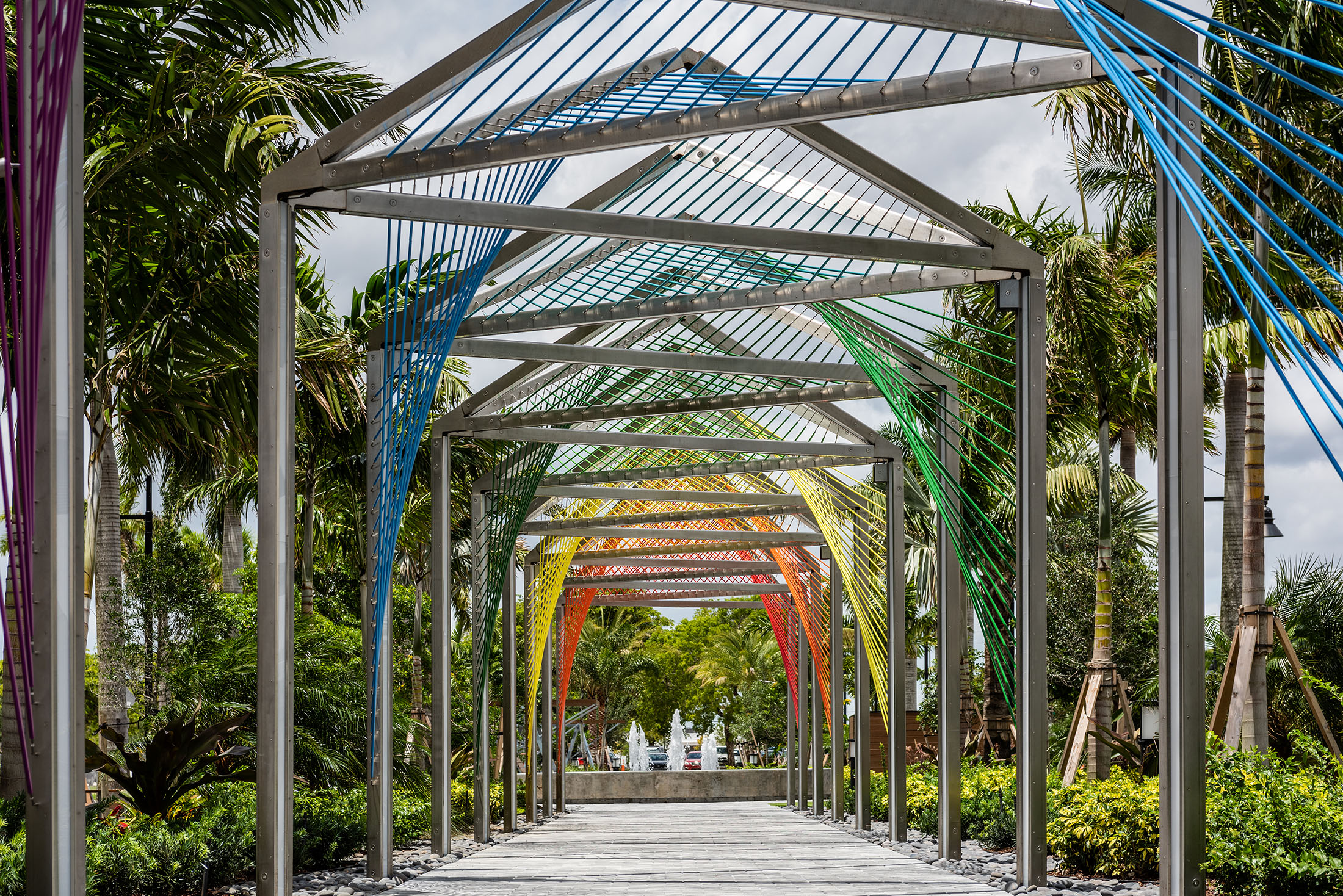 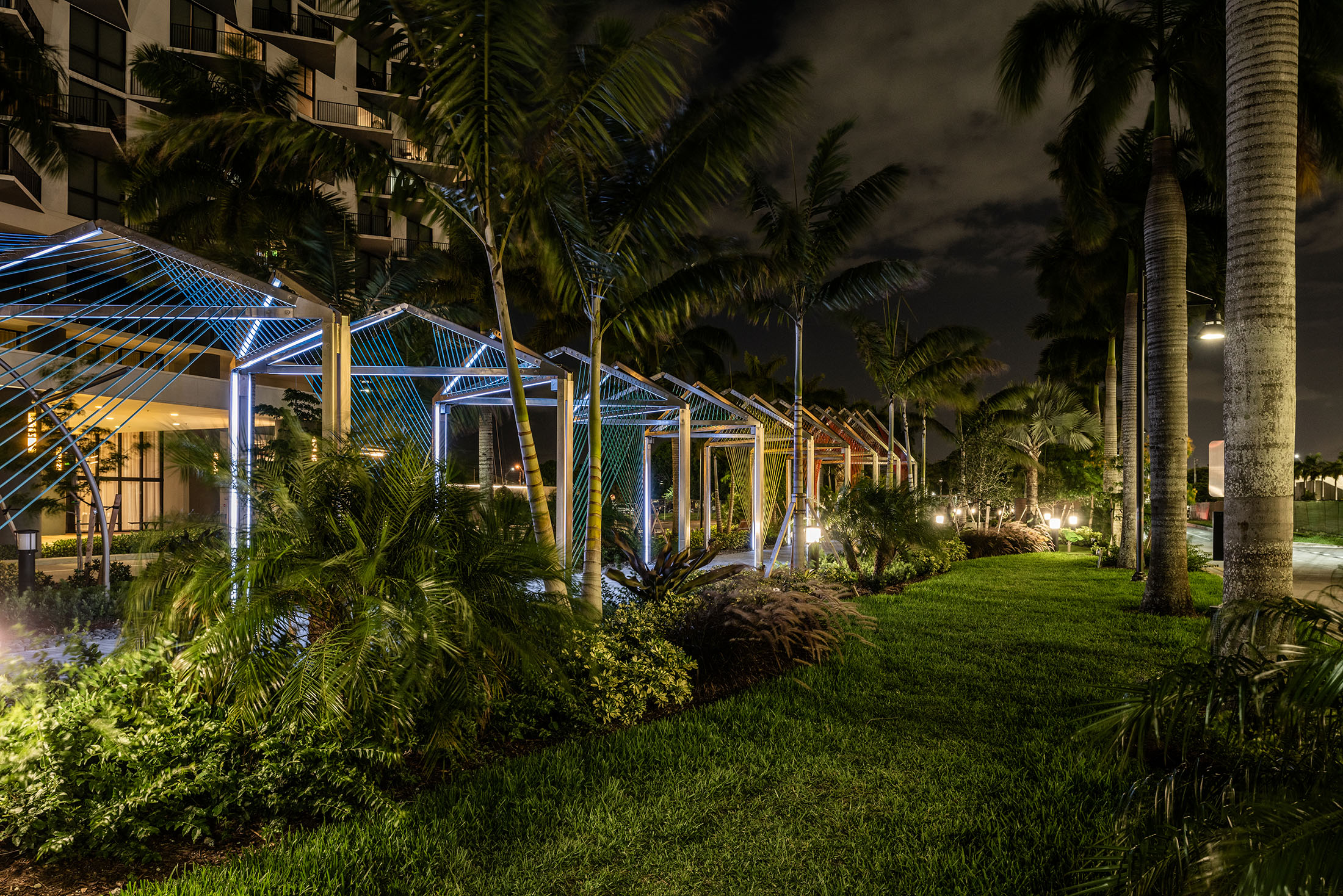 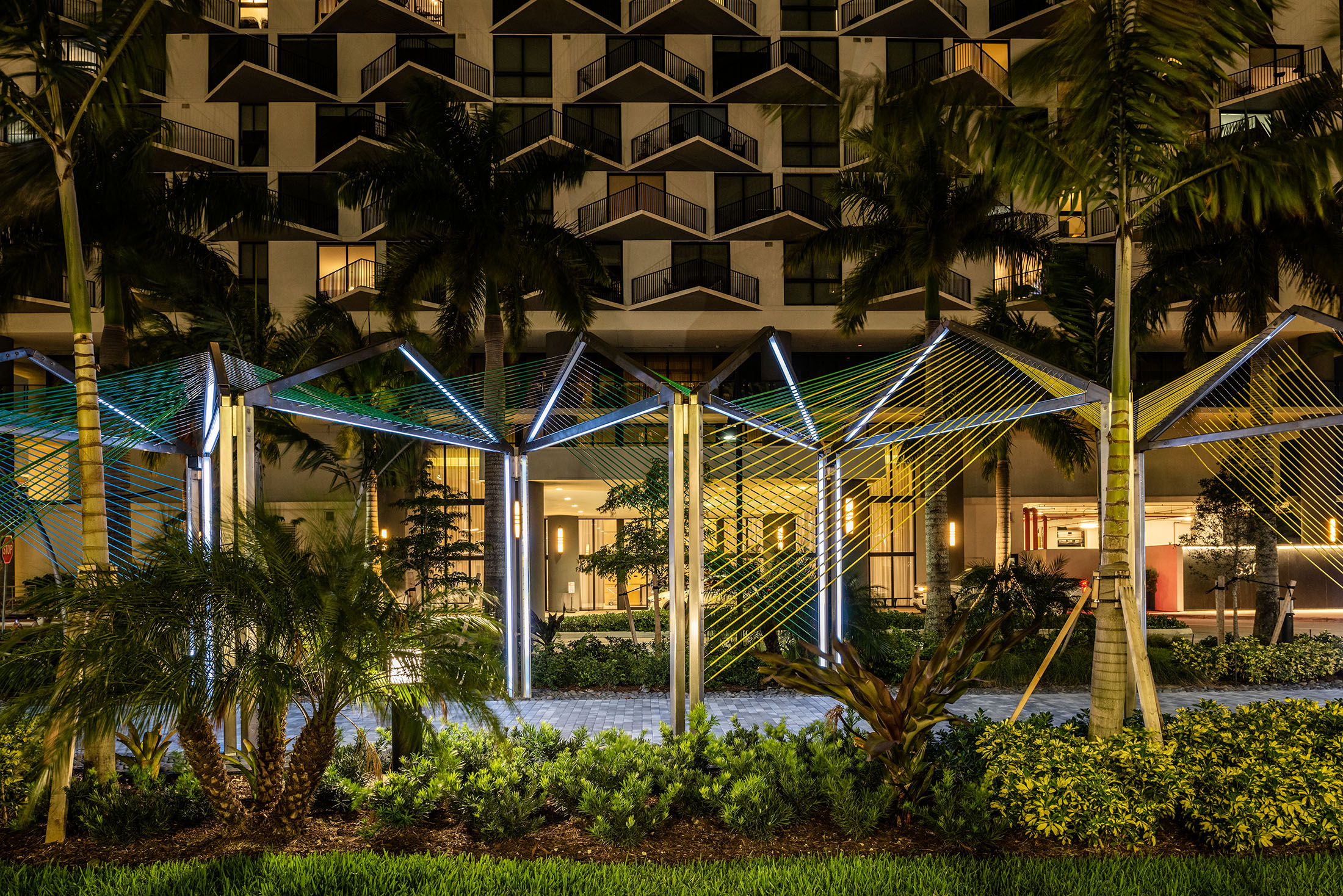 Lightweave is a pair of interactive archway structures that frame two new walkways on the main pedestrian thoroughfare known as the “Paseo” at the heart of Downtown Doral. The project was commissioned as part of the planning for a mixed town center in Miami developed by Codina Partners. The stainless-steel structure of Lightweave is inspired by the vibrancy and rhythm of the local community while addressing the pragmatic concerns of the weather in southern Florida. The form and structure of the archways come together with interactive light and sound to produce a pedestrian space that is constantly changing in playful and unexpected ways. The experience at night is like walking through a musical instrument. The form and color act as scaffolding for an unexpected symphony of light and sound that is activated by pedestrians as they walk down the Paseo.

Lightweave is the first of a series of interactive permeant artworks commissioned by Codina Partners for public spaces in downtown Doral called Lux Doral and curated by Martin Posta. We were asked to create an interactive artwork that ran along two new pedestrian passages that run perpendicular to the main street and intersect in a public plaza. The goal was to create a dynamic interactive artwork for each of the two 130 foot pathways. During the day the colored tubes woven between the structures give the linked archways a vibrancy and cast shadow patterns that change as the sun moves above. At night the lighting becomes visible as it responds to pedestrians and animates along the structure. Speakers create tones at the intersection of each arch in coordination with the lighting giving the sense that the tones are produced by lighting bouncing off the structure.

We designed a series of ascending thresholds or archways that are oriented in a zigzag pattern in plan so that each archway is connected to the next creating a large stable structure. This also allowed for continuous runs of the power and data cables needed to connect the lights, speakers, and microphones. Because of the potential for extreme weather in Sothern Florida during hurricane season we used a series of cables connected between the archways to create volume rather than surfaces that would be damaged by high speed winds. The cables are clad in powder coated aluminum tube to give the ruled surface created by the tubes a vibrant gradient of color. During the day the sunlight above casts changing patterns through the tubes onto the paved pathway below.