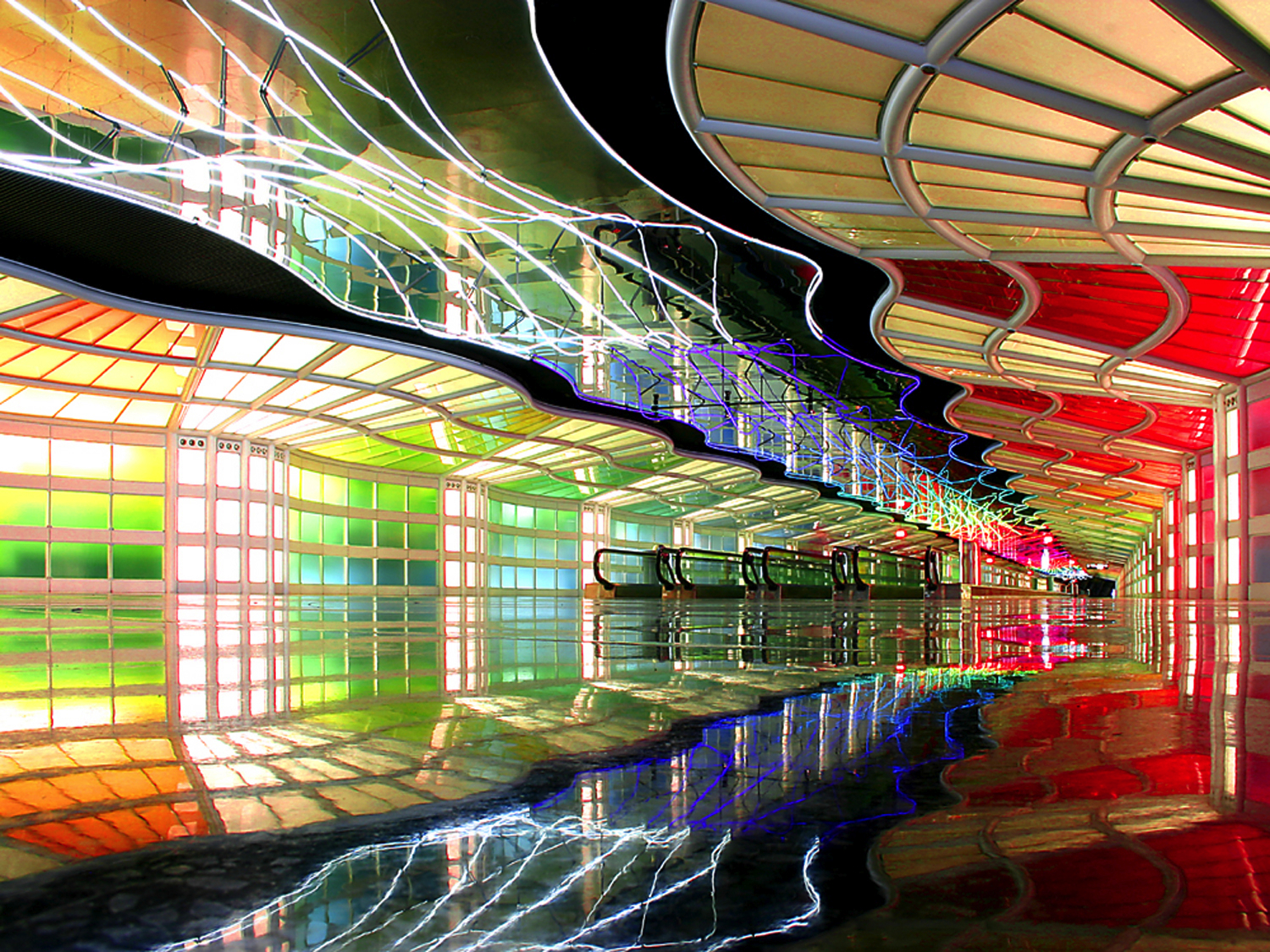 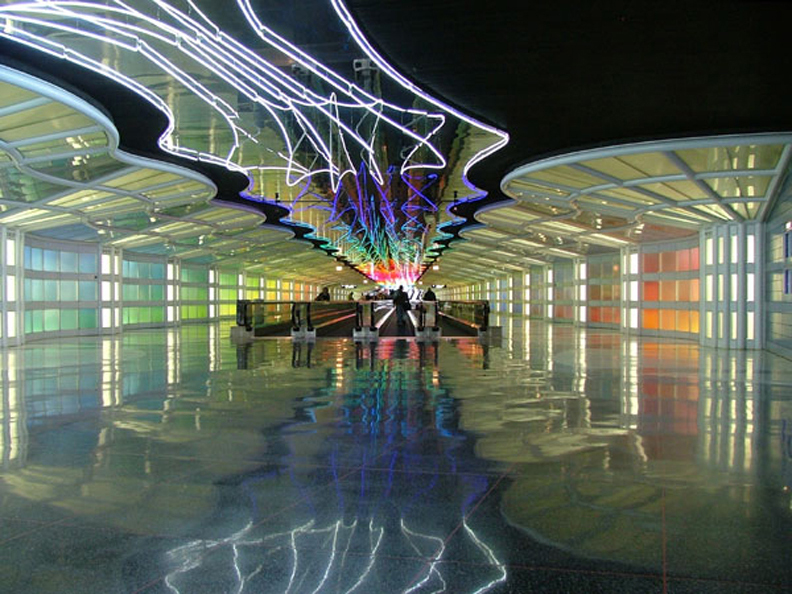 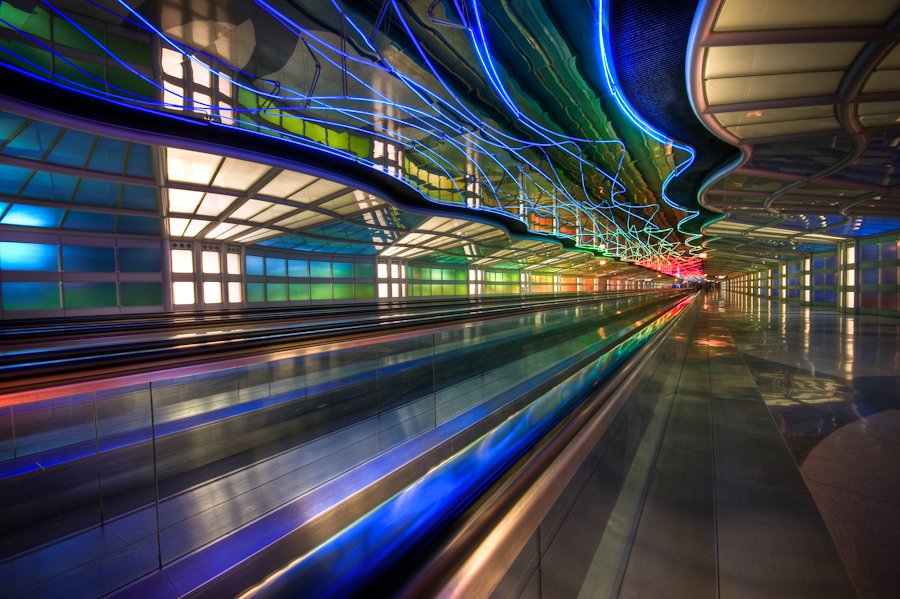 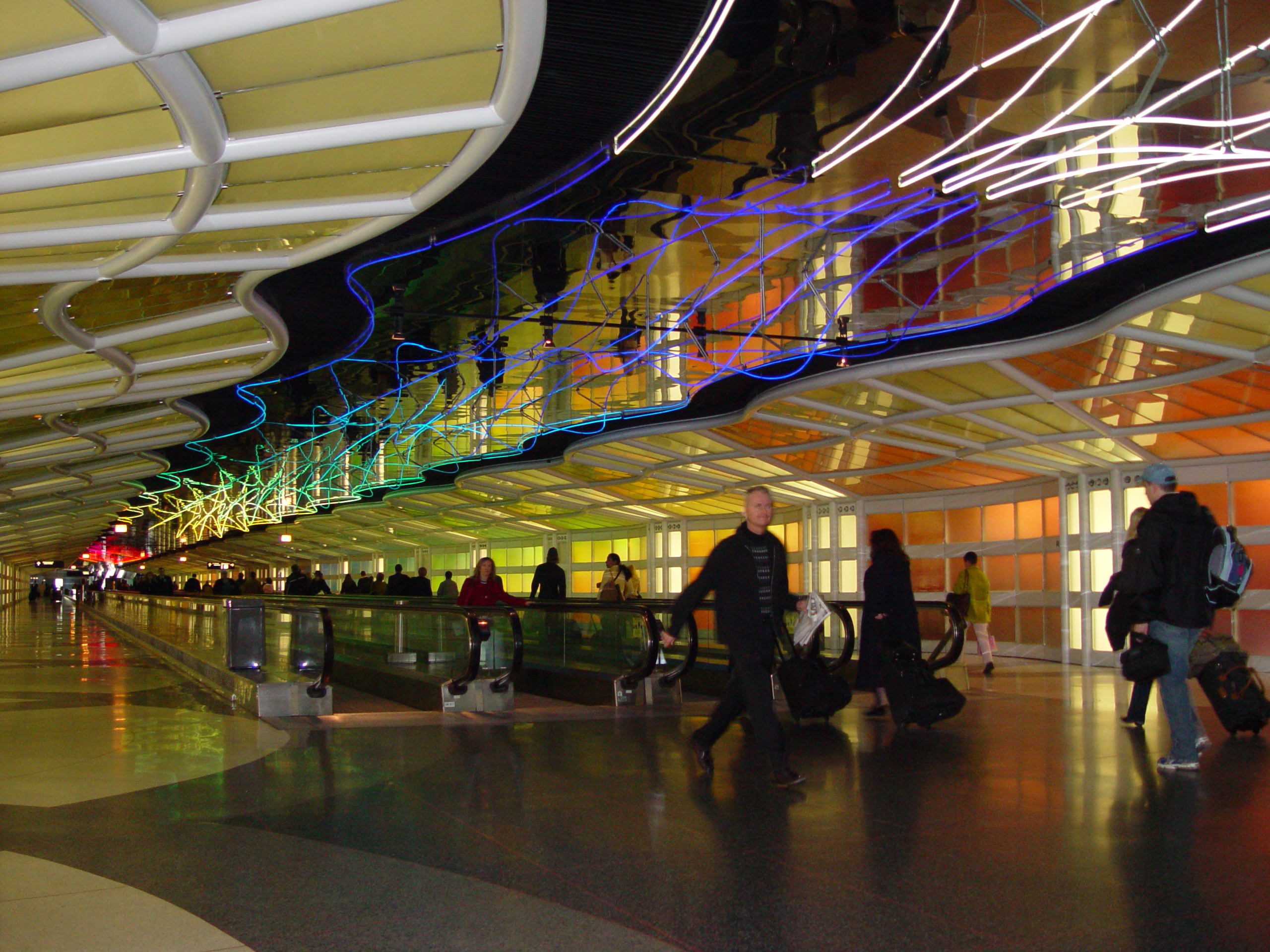 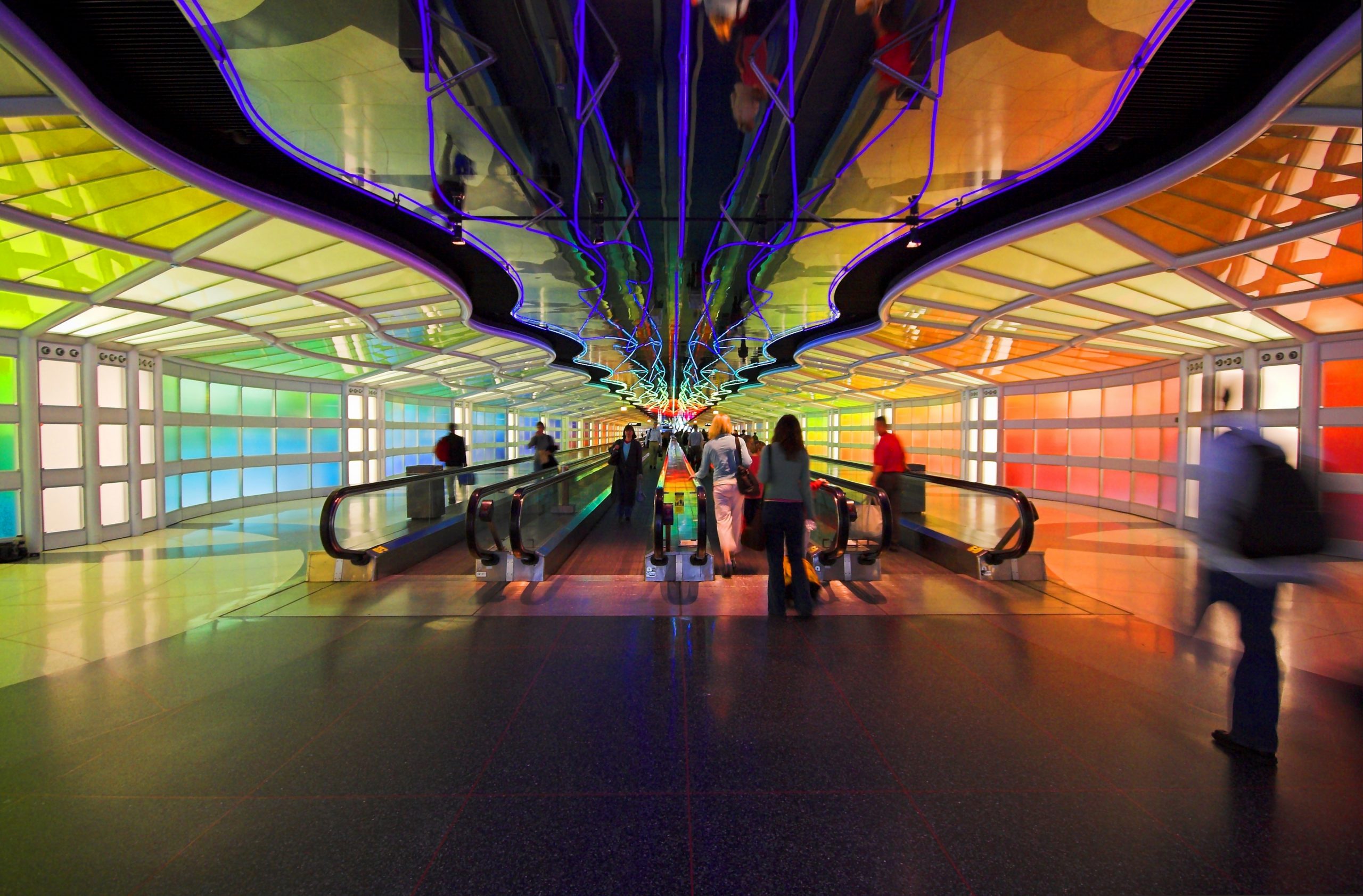 The problem was that access to and from the new “Concourse C” was via an 800’ subterranean passageway. United Airline’s was concerned that passengers would feel claustrophobic in this confined space and never fly United Airlines again.
I created 25’ model with a mirror at its end to represent the 1/2 way point within the tunnel. I discovered some initial interpretations of a restricted environment having an extremely long horizontal length that I identified as an ‘accelerated visual impact’, exacerbated by a tiny end of the tunnel, goal. To relieve the crush of the too-close ceiling, I entirely mirrorizing it. To defeat the visual threat of the two 800 foot parallel walls I undulating them; blurring their impression as their distance from the observer increased.
I placed softly undulating (colorless ‘white’ light), to greet the passengers from both ends. Upon entering the tunnel’s confined space I chromatically shifted to the calming cool end of the spectrum. As people felt more comfortable I progressed toward the warm colors changing the shape of the light elements to become angular. This induces a latent excitement in the person, who feels like they’re part of an adventure performance.

By collaborating with Wm. Kraft, changes in the ‘neon’ was supported by his acoustic experience. The tubes have ~80 different hues progressing cool to warm from the tunnel’s 2 ends. I taught Federal Sign’s painters to color illuminated tubes, with transparent ink. Every evening I traced the changes in the ceiling; when taken to pattern shop to re-draw the layout, to make invisible the tunnel’s changes. To integrate my concepts into the Tunnel’s constraints; a 25’ square section was created with the input of Hutchins Ceiling Contractor to study the measurement of the mirrored “A-Look” product affixed to the metal ‘T’-Bars floated from the uneven concrete. Rejecting every form of mechanical fastener, I suggested double sided tape to hold the mirrored sheets onto these ‘T’-Bars but there were 3 different coefficients of expansion and contraction: the “A’-Look, the tape’s internal plastic membrane and the metal ‘T’-Bar. I asked why this membrane couldn’t be eliminated, having its adhesive affix the ‘T’-Bar and ‘A’-Look This was the first Very High Bond Tape now a large division of 3M!

The anniversary issue of Public Art REVIEW discribed, “SKYS THE LIMIT” as: “Symbolism and dynamism manifest themselves in specific examples of public light art. Thousands of weary travelers have experienced Michael Hayden’s Sky’s the Limit while traveling between O’Hare Airport’s Terminals B and C. Hayden’s art transforms a long passage through the underground into a lively experience. The tunnel achieved added dimensions with the space moving as well as me. Neon sequenced controls, colors, and electronic music announced an electronic journey, enlivening an otherwise quotidian experience. One’s movement on the walkway becomes part of the artwork.”