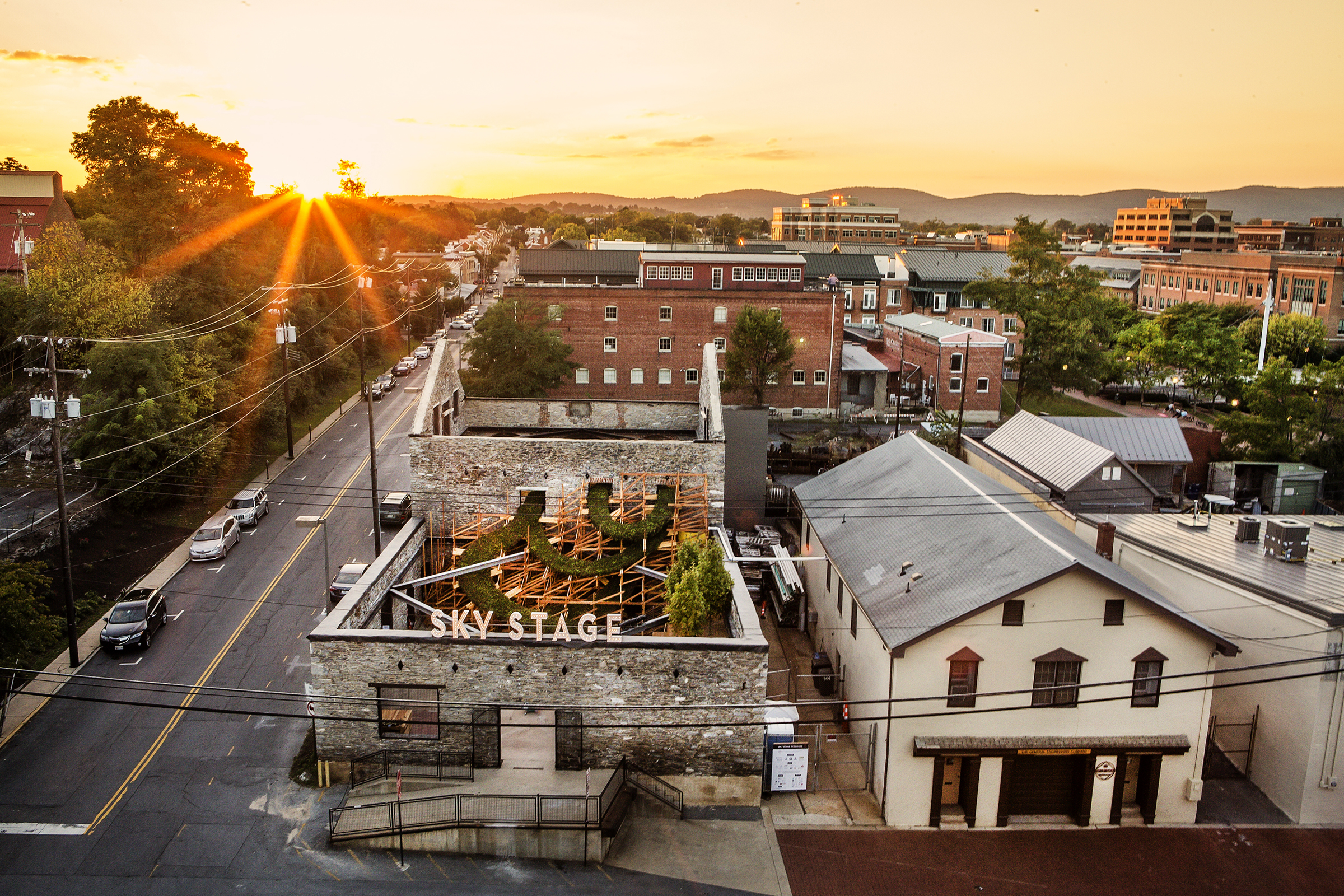 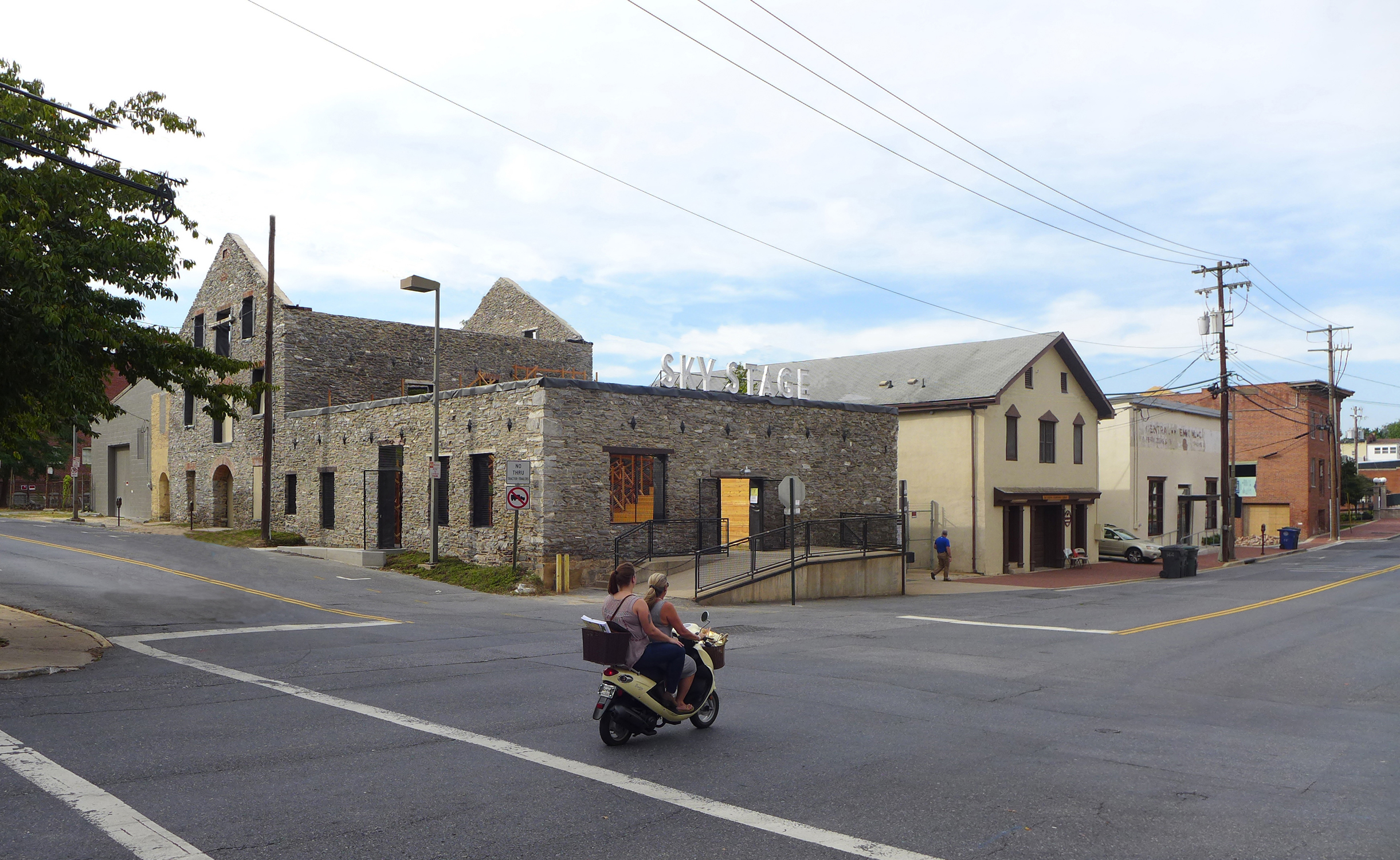 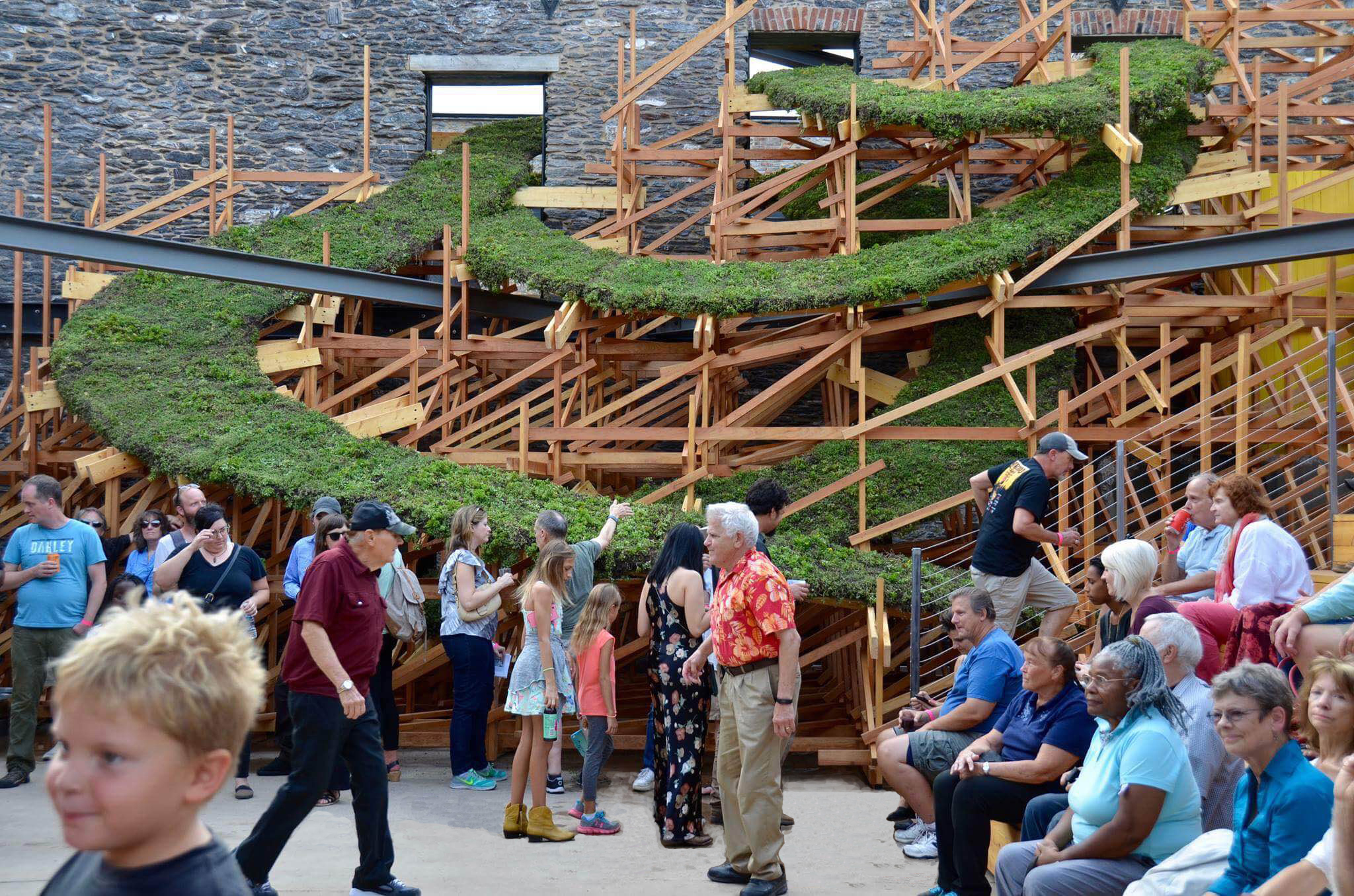 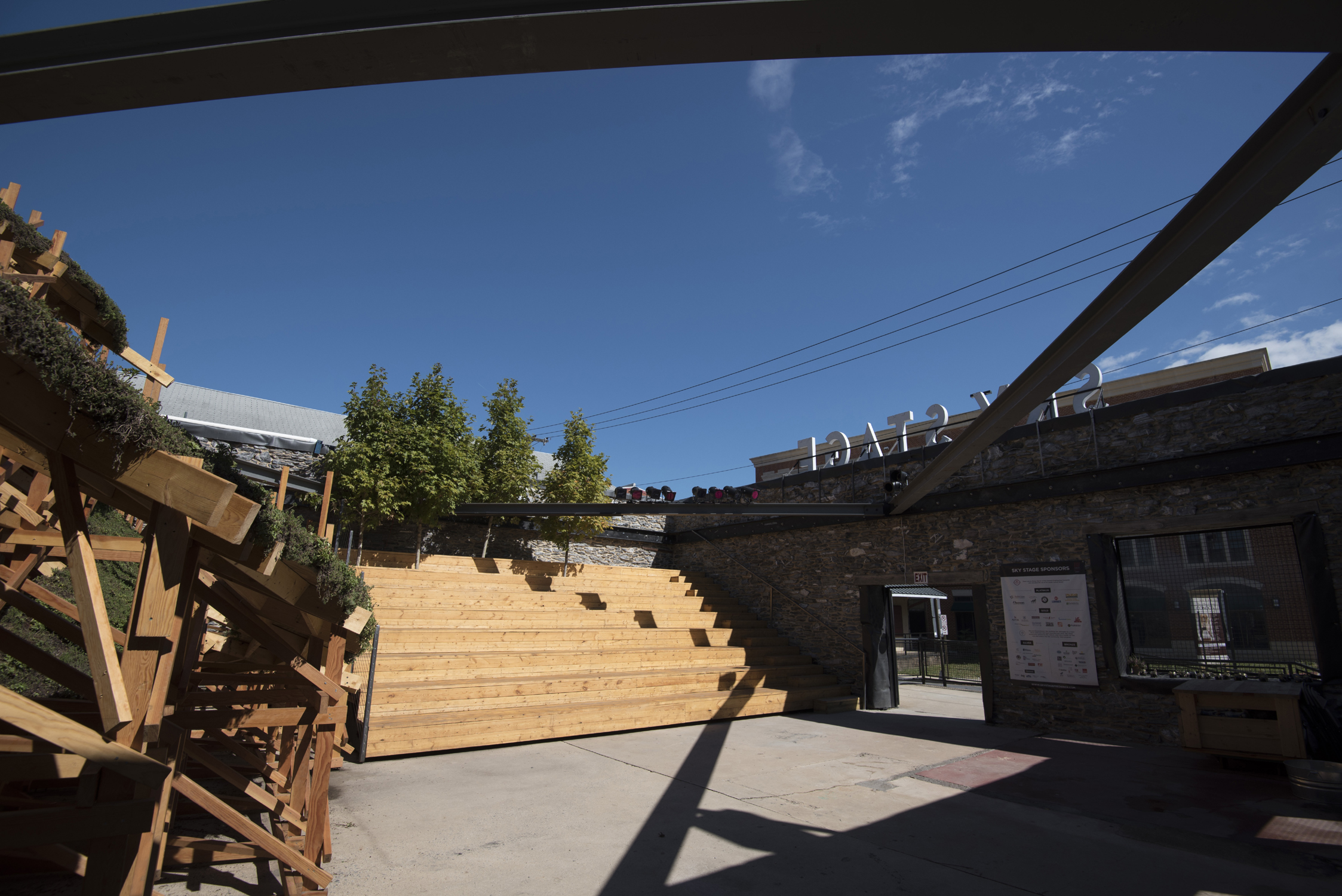 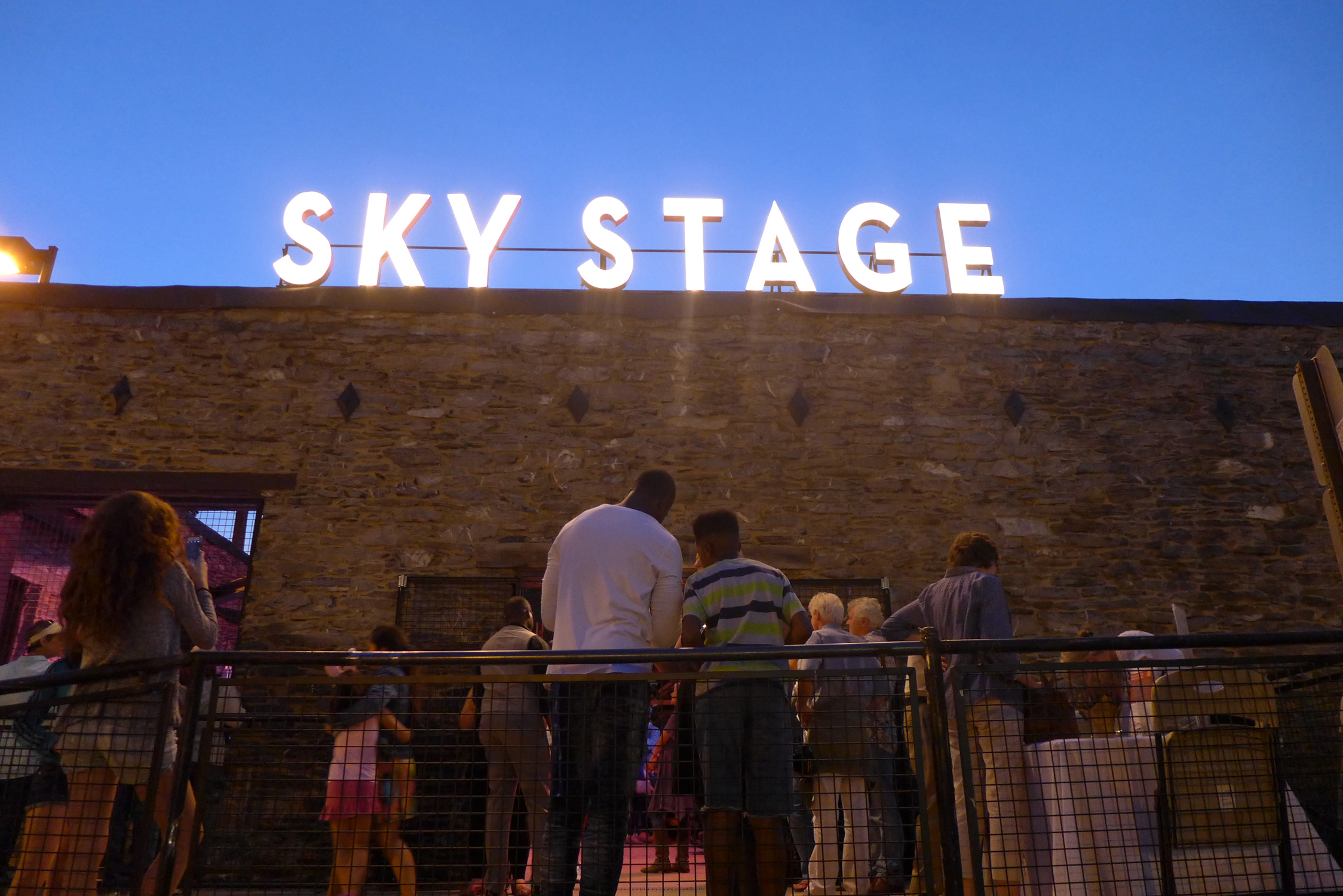 Sky Stage transforms a burned building shell into a living sculpture and community performance space. This building suffered a devastating fire in 2010 and lost its roof. It remained boarded until September 2016 when Sky Stage opened as a 140-person theater. Ribbons of plants now wind, twist, and grow through the building’s doors and windows. Wooden scaffolding supports spirals of plants. Rainwater is collected from a neighboring building’s roof and stored in the sculpture’s bright yellow rain cistern, irrigating the drought-resistant plants and trees, and sustaining life in this blighted building.

Sky Stage was envisioned by artist Heather Theresa Clark out of a desire to create a large scale transformative community art intervention in an underutilized space. In her artwork, Clark utilizes art, architecture, and public interventions to catalyze built environments that power themselves, cleanse themselves, transform waste, provide wildlife habitat, produce food, and enhance the lives of people. Because boarded up buildings like this often sit for years due to lack of funding for redevelopment, Clark decided to create an art intervention that with limited funding could make a big impact on the community. At Sky Stage, the artwork is not just the sculpture, but rather the overall transformation and programming of the blighted building. She brings life into the burned-out space through the living sculpture, as well as how the public uses the space. Clark has invited the local community to utilize Sky Stage for their own performances and activities, providing a public gathering space for those who may not otherwise have a venue to share their talent. Transforming this blighted building into a living public space has inspired the local community to perform and organize 30 events in fall 2016.

Because this building had been boarded up for six years, Clark decided to approach the owner and ask him if he would consider donating the space until he eventually redevelops it. He agreed. The project then quickly expanded into a community effort. Partnering with Frederick Arts Council and with no large grants, Clark approached local contractors and engineers to donate their time. To structurally engineer the sculpture, Clark collaborated with the Massachusetts Institute of Technology’s Digital Structures research group to computationally engineer the sculpture’s complex wooden lattice with custom geometry-generating algorithms. The lattice supports the double helix spiral of drought resistant sedum, which Furbish Co., a local green roof expert, helped to technically design by modifying green roof systems. Fountainhead Irrigation donated design and installation of the rainwater collection and irrigation system, and many local contractors donated their time to help construct the project, including Anthony Owens Remodeling and Repair, Rockwell Construction, ADTEK Engineering, Furbish, Parlights, Inc., Provident Electric, MK Concrete, and Cable Concepts.