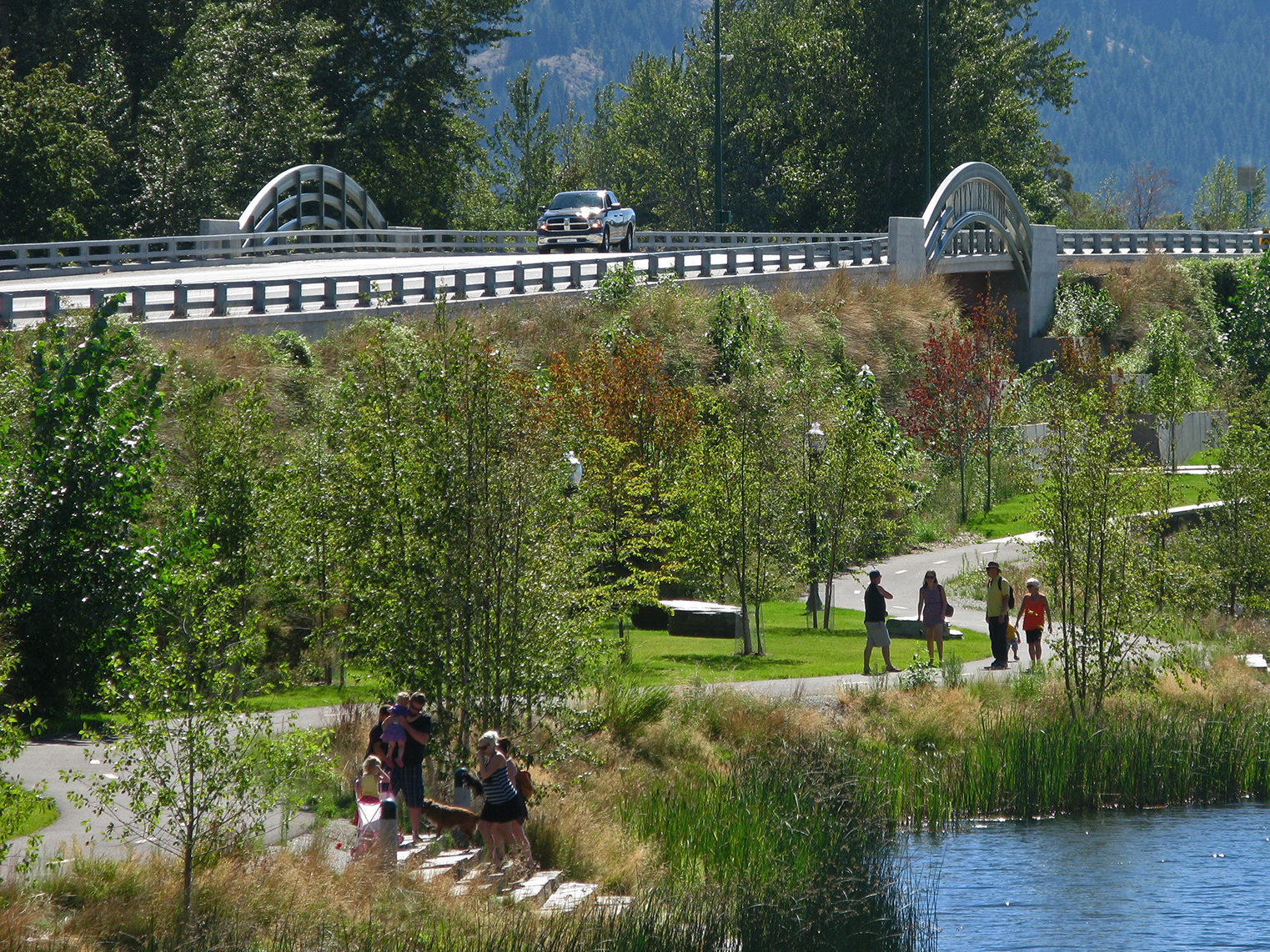 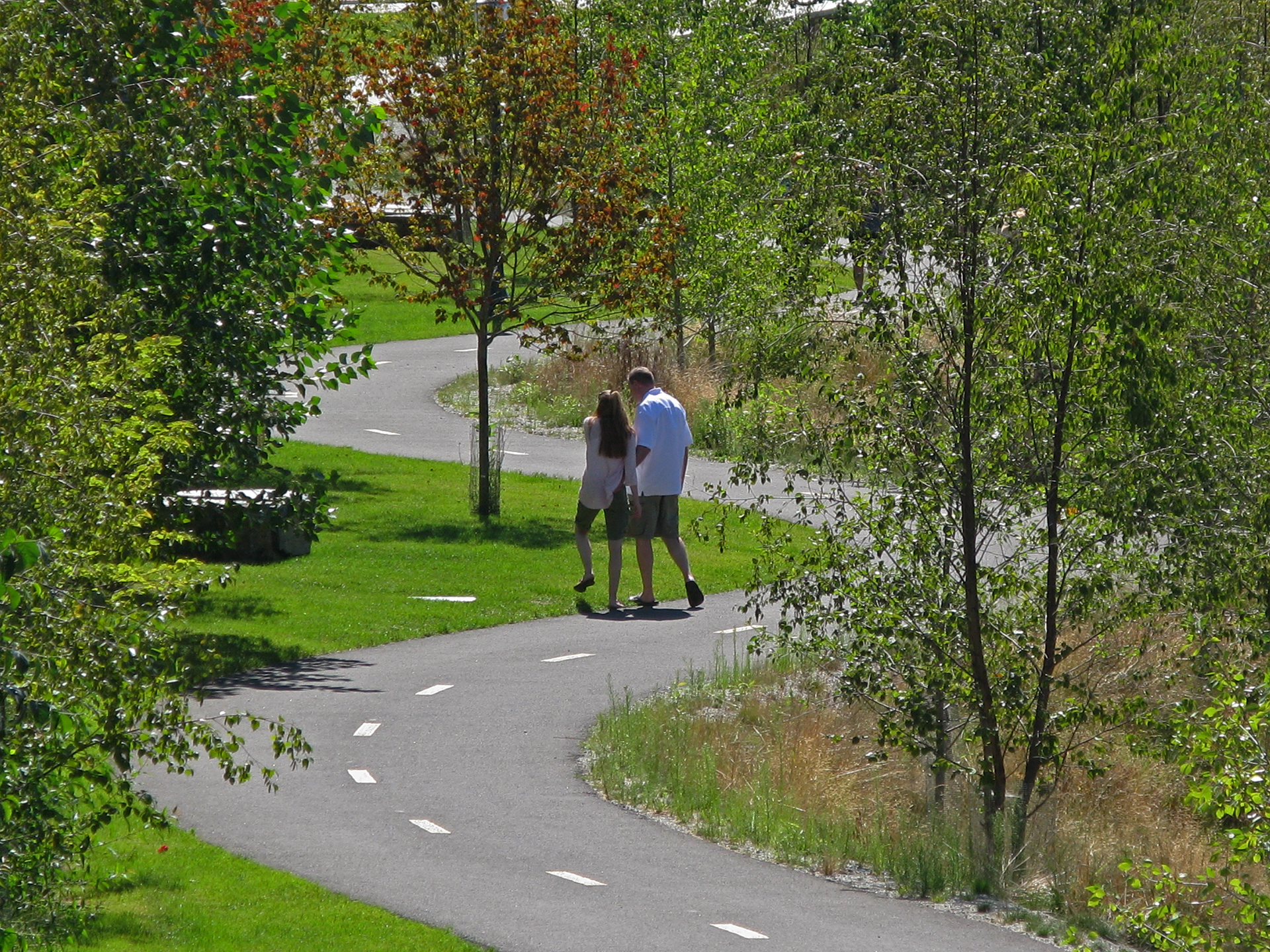 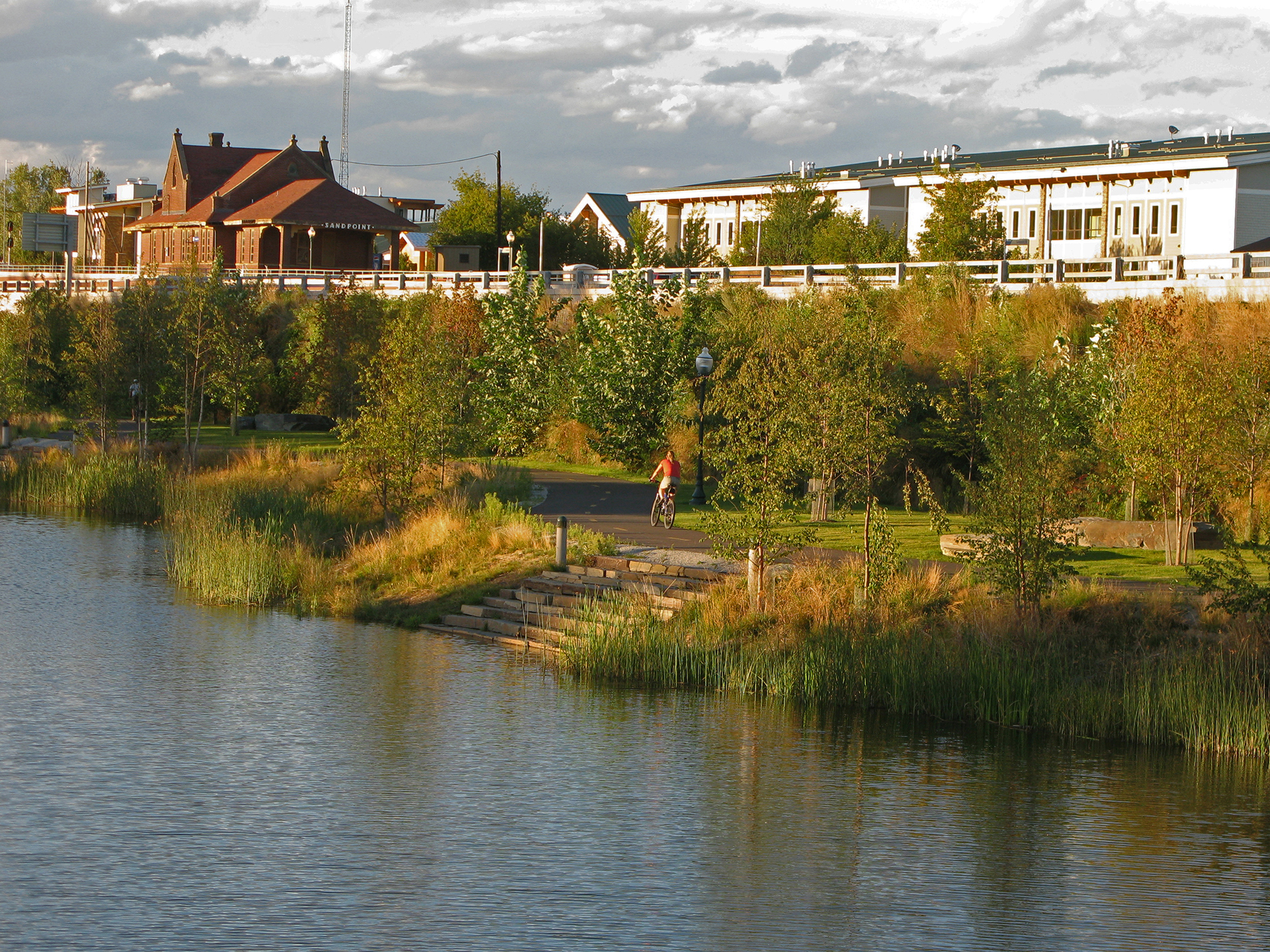 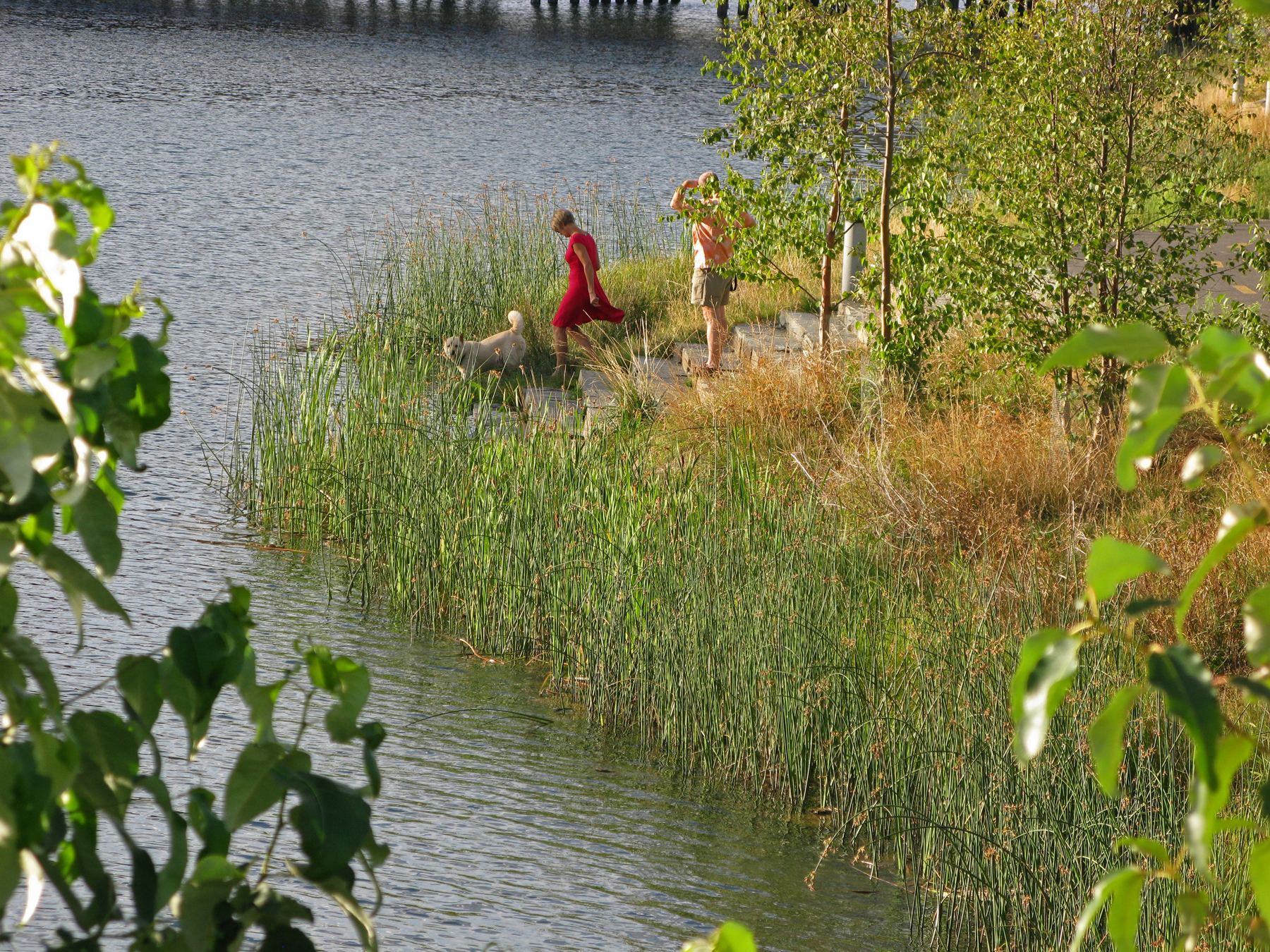 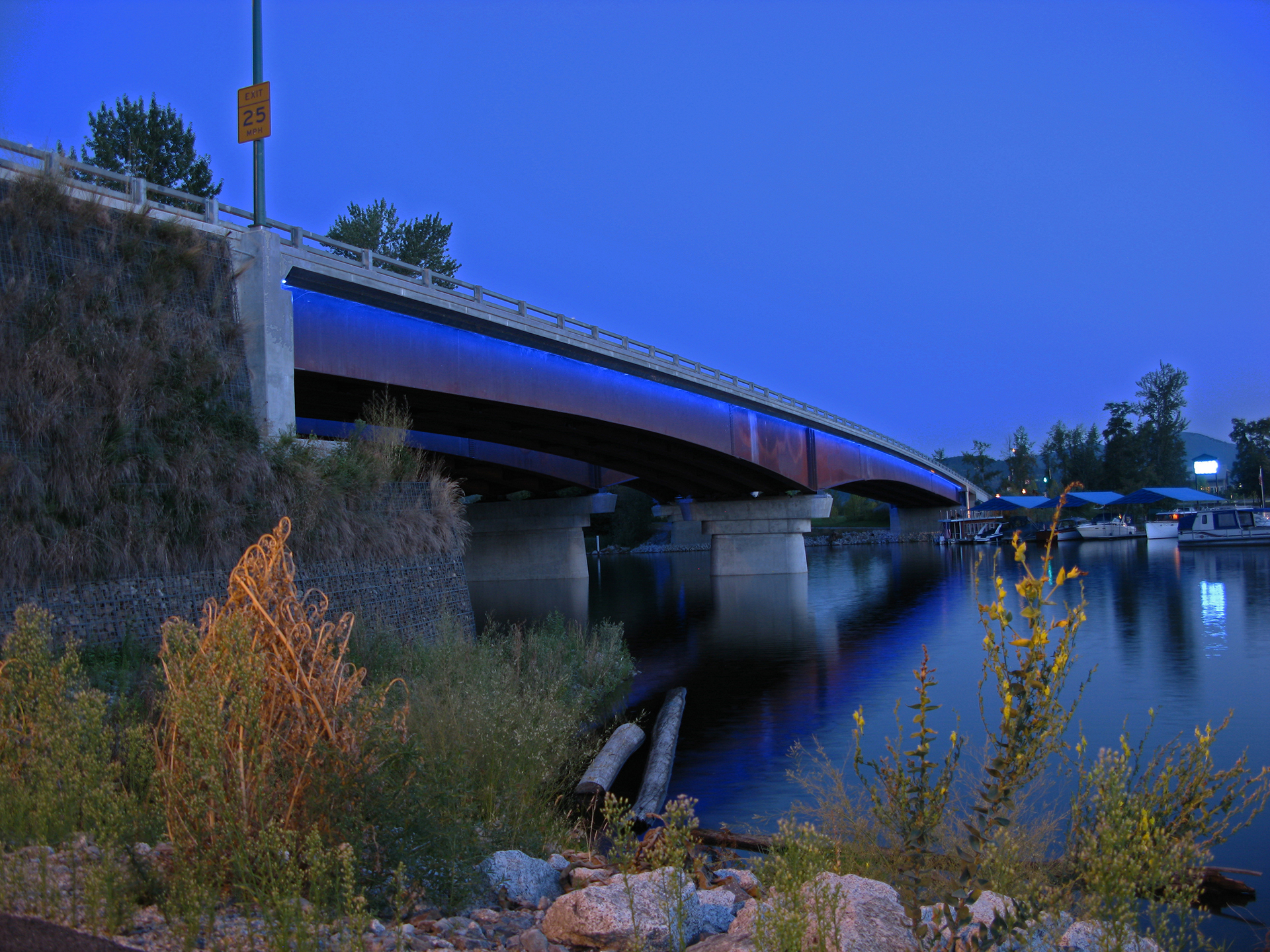 The Artist’s conceptual plan introduces a major environmental feature, the living wall concept, which replaces traditional post-and-beam highway construction with MSE green walls. The project, sited between Lake Pend Oreille and Sand Creek, is the backdrop to downtown Sandpoint. Implementing the MSE Green Wall in place of traditional concrete structures allowed the Team to address the concerns of the community creating a park-like space rather than a freeway under-story at the backside of downtown. The project includes three entryway bridges, the Sand Creek boardwalk, bicycle paths, trails, retaining walls, lighting, drainage ponds, wetland mitigation, and fish and wildlife habitat mitigation.

The level of integration on this project was extremely close through design development. In 2001, the artist authored a design and public art plan that detailed numerous design concepts including: the green wall, river walk, bridge designs and concrete patterning. The artist provided detailed drawings and models that supported this concept through design development. The artist’s biggest contribution to this project is the MSE green wall, which allowed the Byway to be located between Sand Creek, the railroad and Lake Pend Oreille, without destroying the integrity of the town of Sandpoint. The engineering team, CH2M Hill, hired the artist as a site design visualization specialist, because the citizens had rejected the project, believing it would destroy their town. The artist met with the community and translated their concerns into a vision plan that provided a new approach to the highway structure. On September 11th, 2001, the artist introduced the MSE green wall concept to the design team, challenging the team to rethink their design. This new concept created a great deal of internal debate. For the following year the engineering team designed two approaches to the structure: typical post-and-beam construction and the alternate, the MSE green wall structure.

The collaborative process between the artist and the design team was extremely close through design development. During this two-year period, the artist worked closely with the community and design team to demonstrate and model the linear park component of the project that was promoted by the adoption of the MSE green wall structure. The artist presented drawings, models and photographs, detailing her concepts for the river walk, gateway bridges, concrete patterning and sculptural landforms created by the green walls. When the artist and team presented the redesigned project to the community, opposition reversed from 400:1 against to 400:1 in support of the new green byway concept. Due to budget shortfalls and the extended design and construction process that followed design development, the artist was not included on the team through final design and construction that took place during the following ten years. As public art was voluntary on the project and the artist worked as a visual site design specialist, the team could implement her work that developed for the site. It is amazing to see the project built so closely to the artist’s vision and design development work.

The scale of the project, the integration of habitat, landscape, trails, swales, bridges, lighting, and the green wall overlaid upon the transportation corridor is stunning. It is a very unique project that expresses the complexity human nature. The citizens of Sandpoint expressed their need for the town to be viewed from the Byway, attracting visitors to the area. The Byway are breathtaking and the views from the linear park are hilarious as trains and trucks seeming ride atop the green wall. Featured in Public Art Review, Fall/Winter Issue #49, in an article entitled, "A Green Way Through," by Daniel Jost.