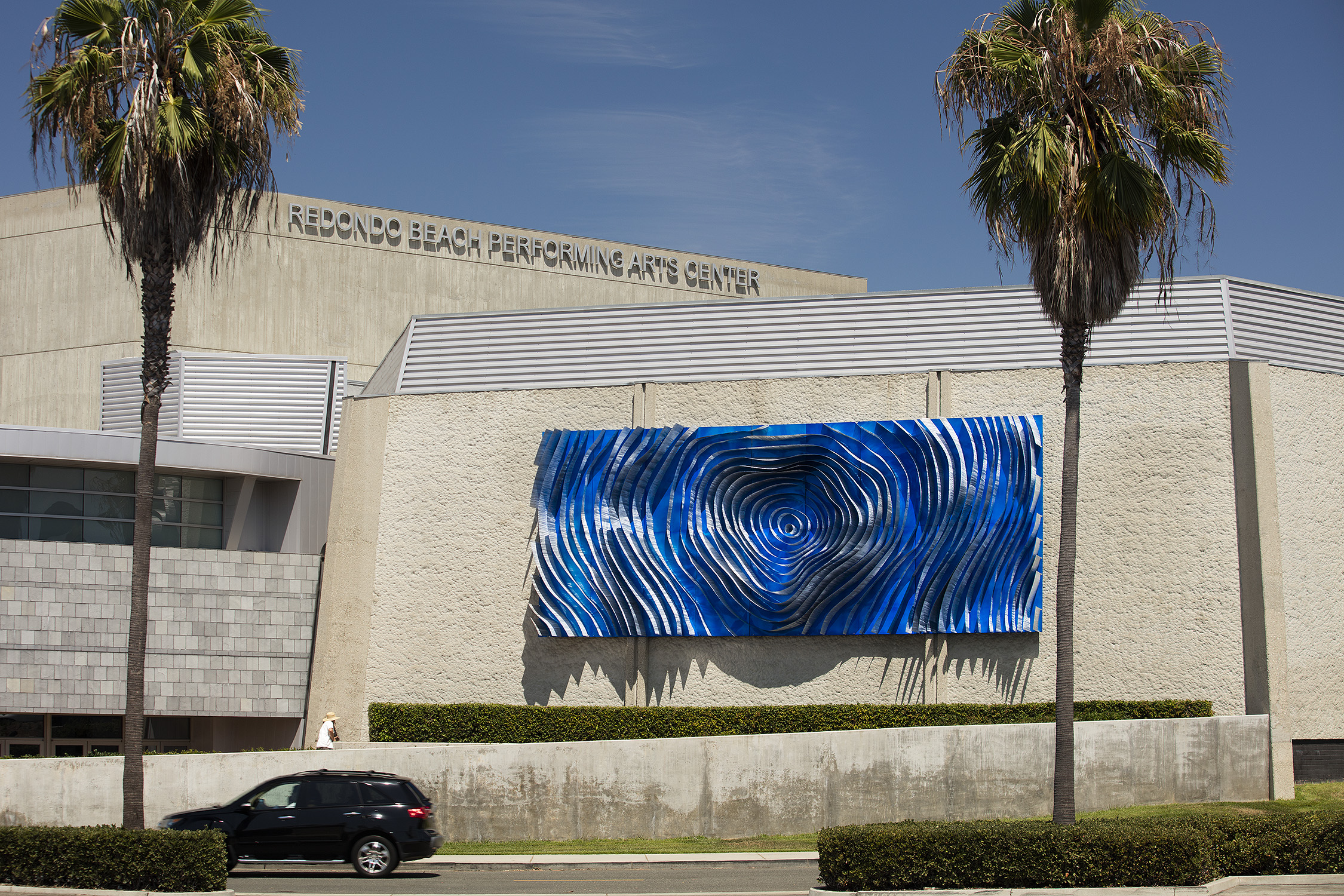 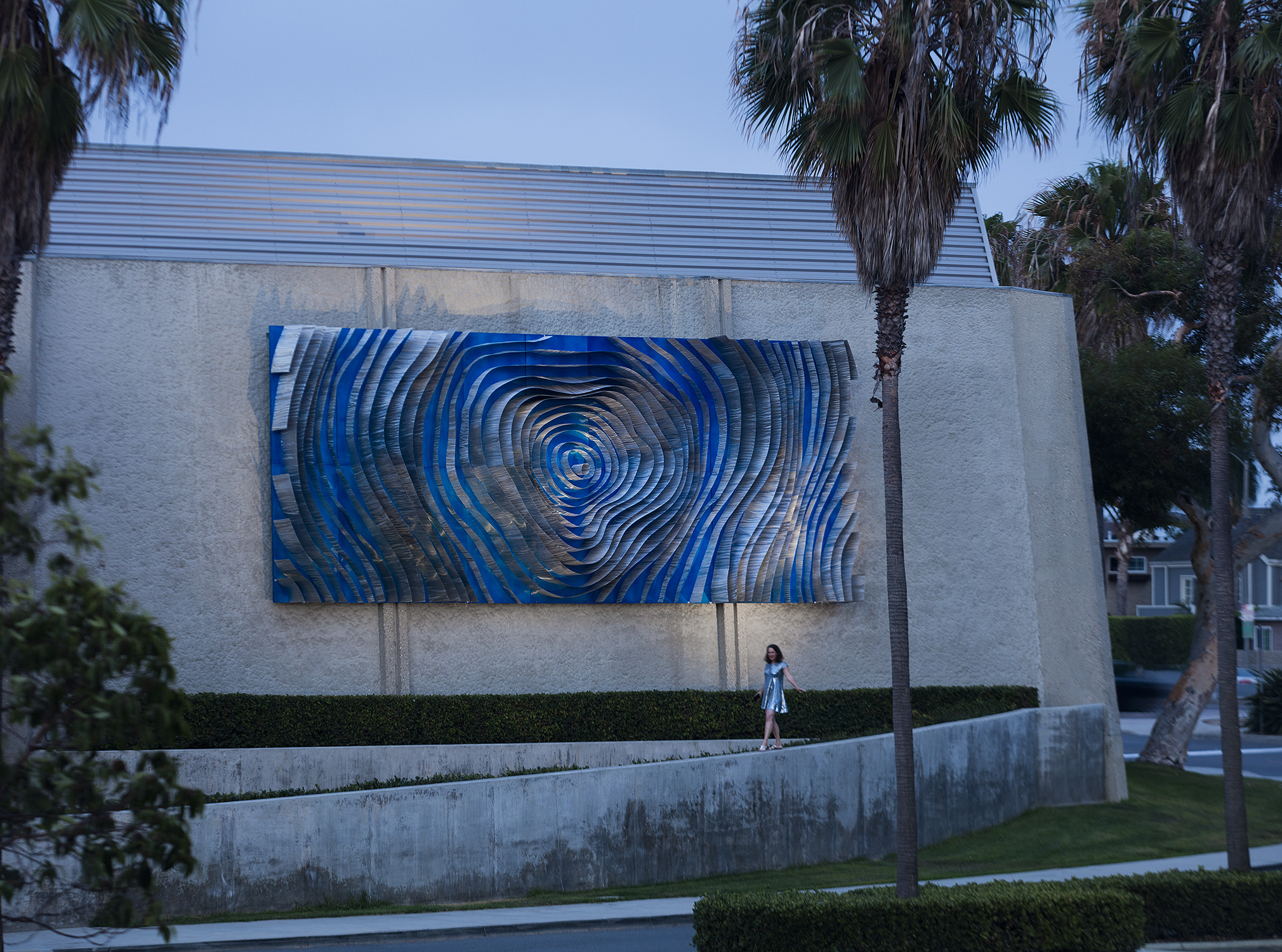 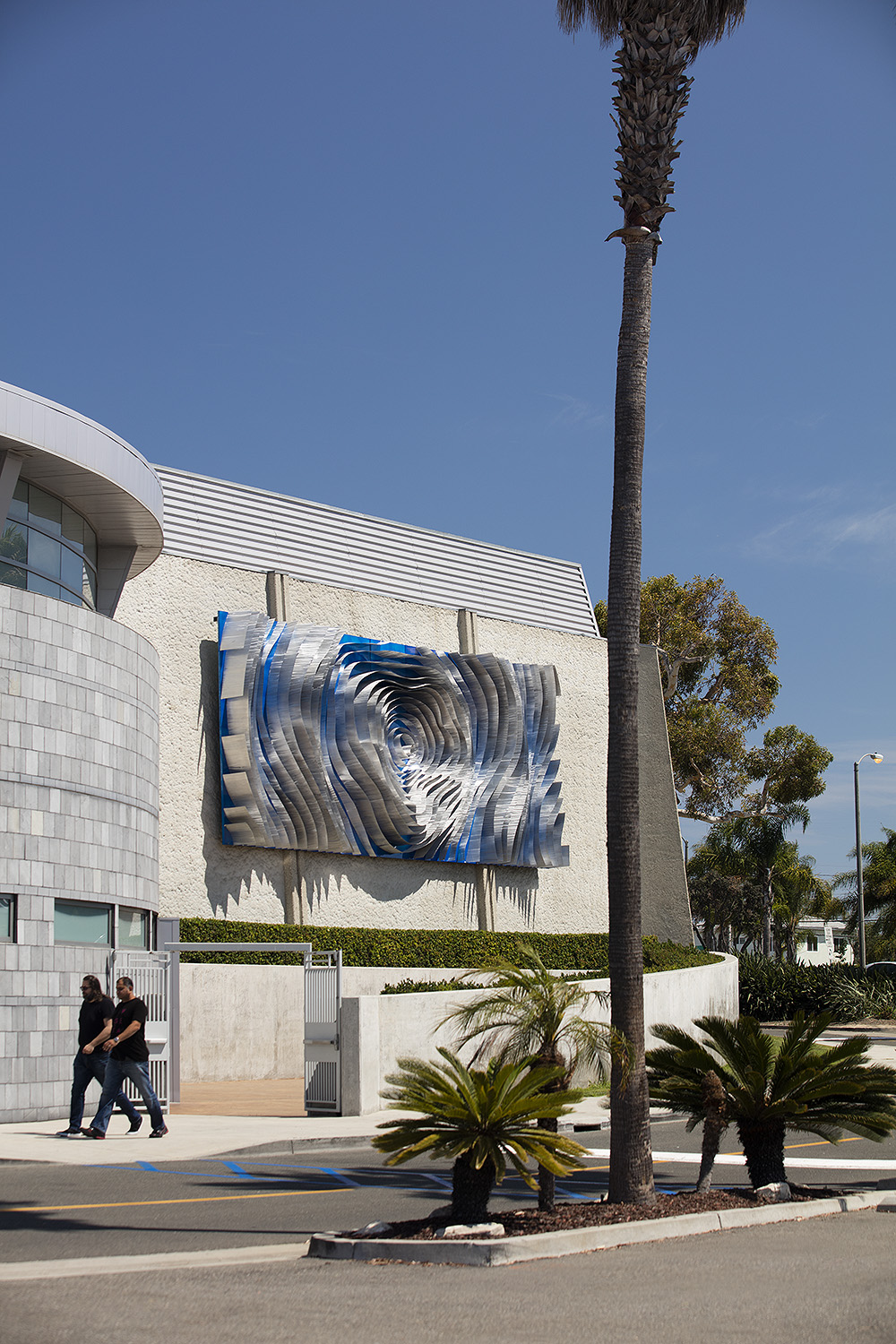 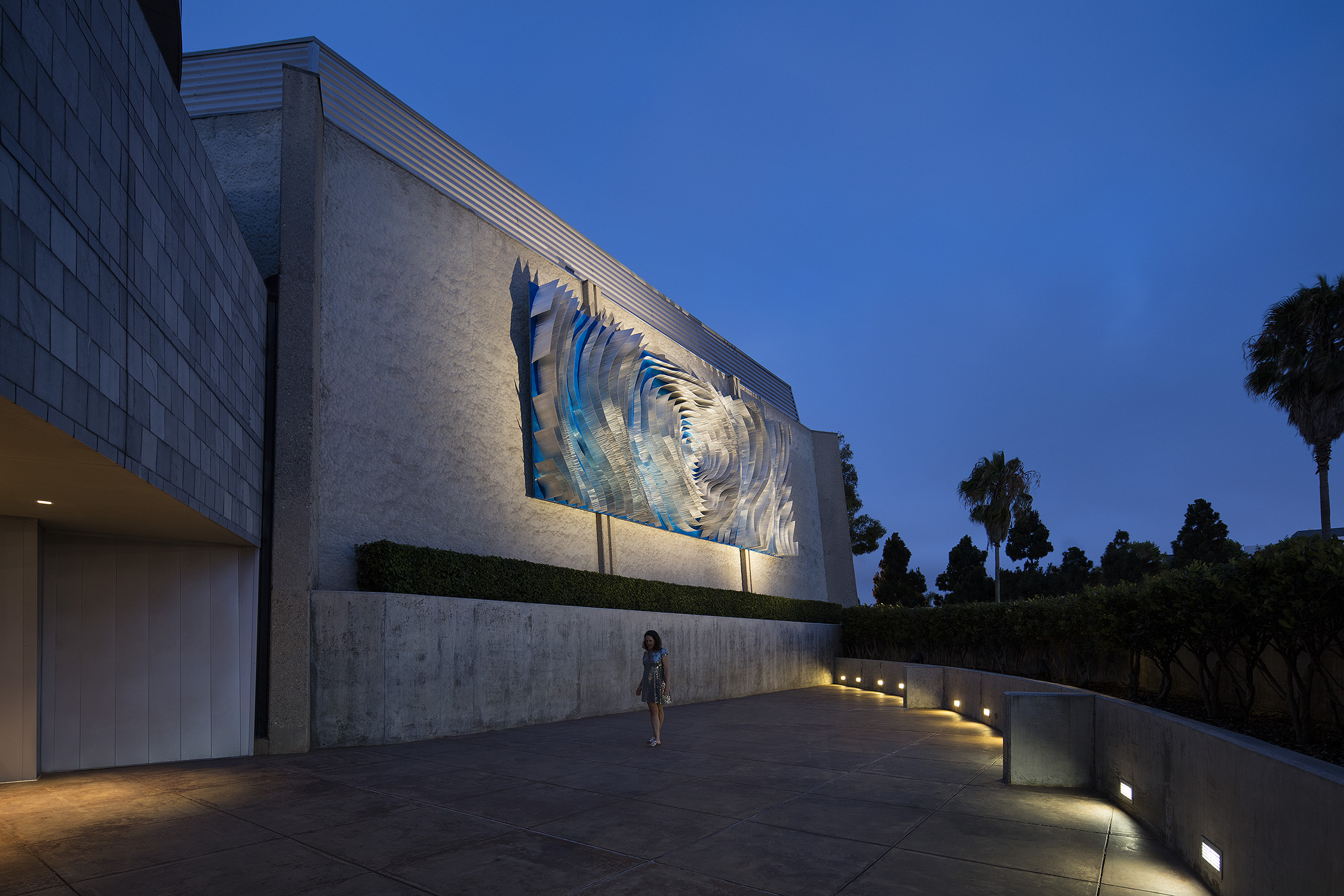 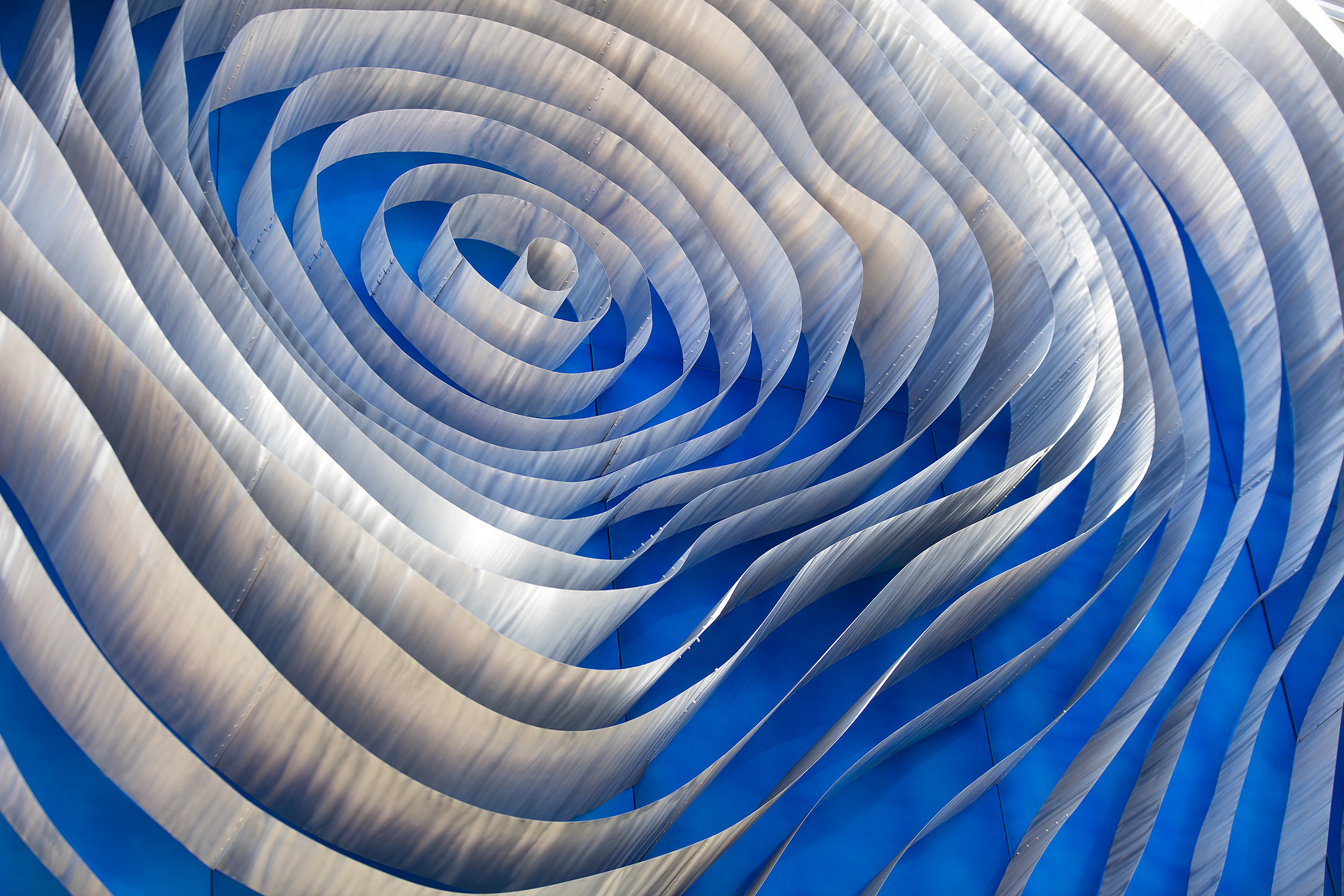 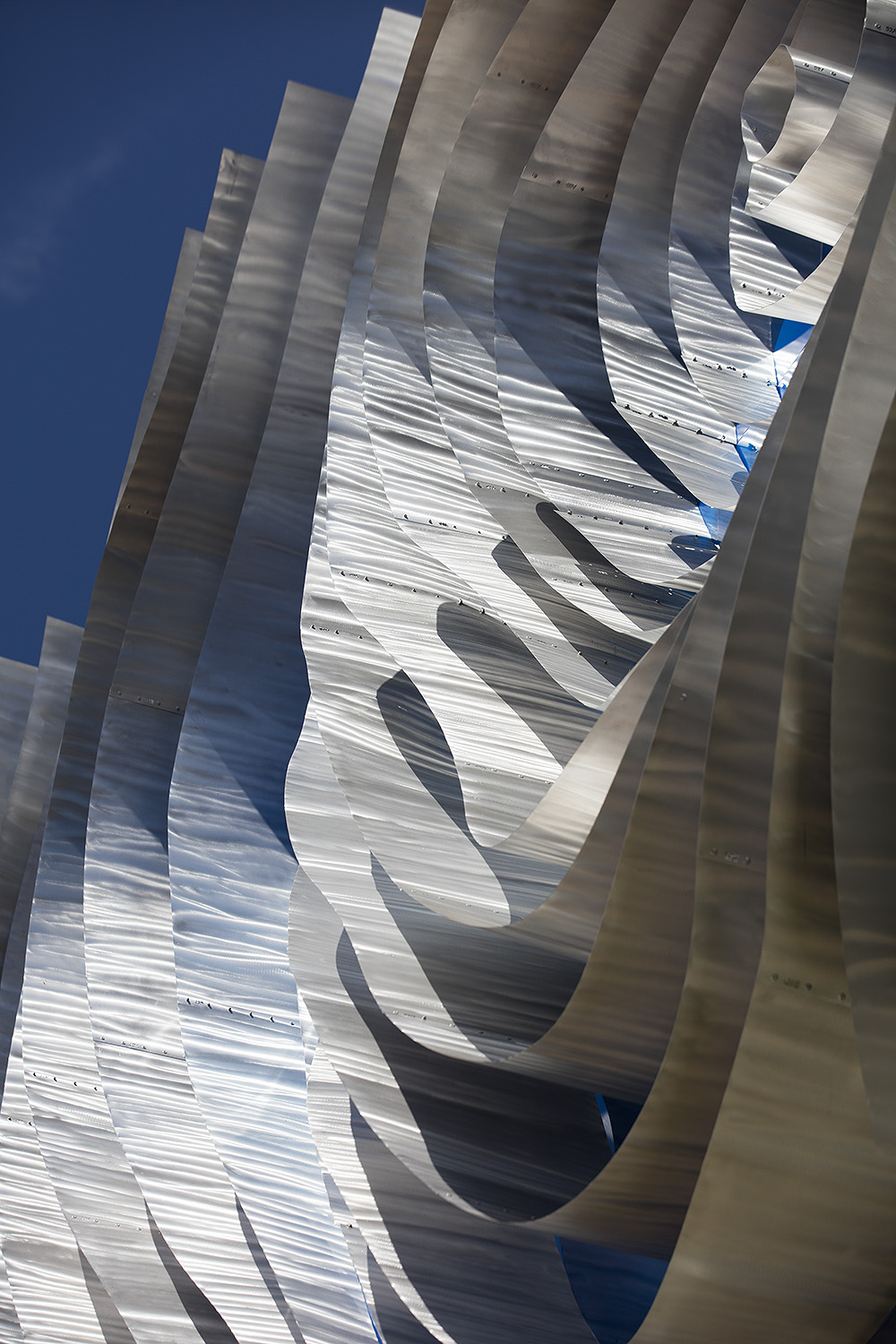 “Waves” was commissioned by the City of Redondo Beach and is the first public art commission funded by the John Parsons Public Art Fund. The 15′ x 37′ large-scale aluminum sculpture enhances the exterior of the Performing Arts Center and distinguishes it as a major entry point of the city. The city’s Public Art Program has an inventory of 30 works, and “Waves” is an achievement in the city’s efforts to inspire community through public art.

Redondo Beach Performing Arts Center is the Crown Jewel of the South Bay arts scene. Originally a high school auditorium and remodeled in 2003, the 1,453-seat theater is home to prestigious presenters in musical theater, dance, speaker series, concerts and more. The goals of the project include design, imagery, and material choices that are compelling, family-friendly, of exceptional durability, of enduring value and maintenance and appropriate to the site. Because the installation location for this public art commission is the west-facing exterior wall, the integration was critical. Each of the three available wall sections are 26 feet in height and 21 feet in width on average. Each of the wall’s three sections are separated by intermediate columns that are 18 inches wide. The total available surface area for the artwork measures 26 feet in height and 66 feet in width. The incline slope of the wall from its base to its top is approximately 2 feet. The surface of the wall is plastic formed concrete, resulting in a coarse surface. The depth of the concrete wall is approximately 9 inches thick.

Gordon was selected by the Redondo Beach Public Art Commission from a pool of 39 artist proposals. The selection process included review by City staff and relevant Commissions and the final approval was from the Mayor and City Council in a public forum.

The Redondo Beach Performing Arts Center, located at 1935 Manhattan Beach Boulevard, is a popular cultural destination for South Bay residents. A state-of-the-art facility, it is home to a myriad of community and privately produced concerts, performances and special events.