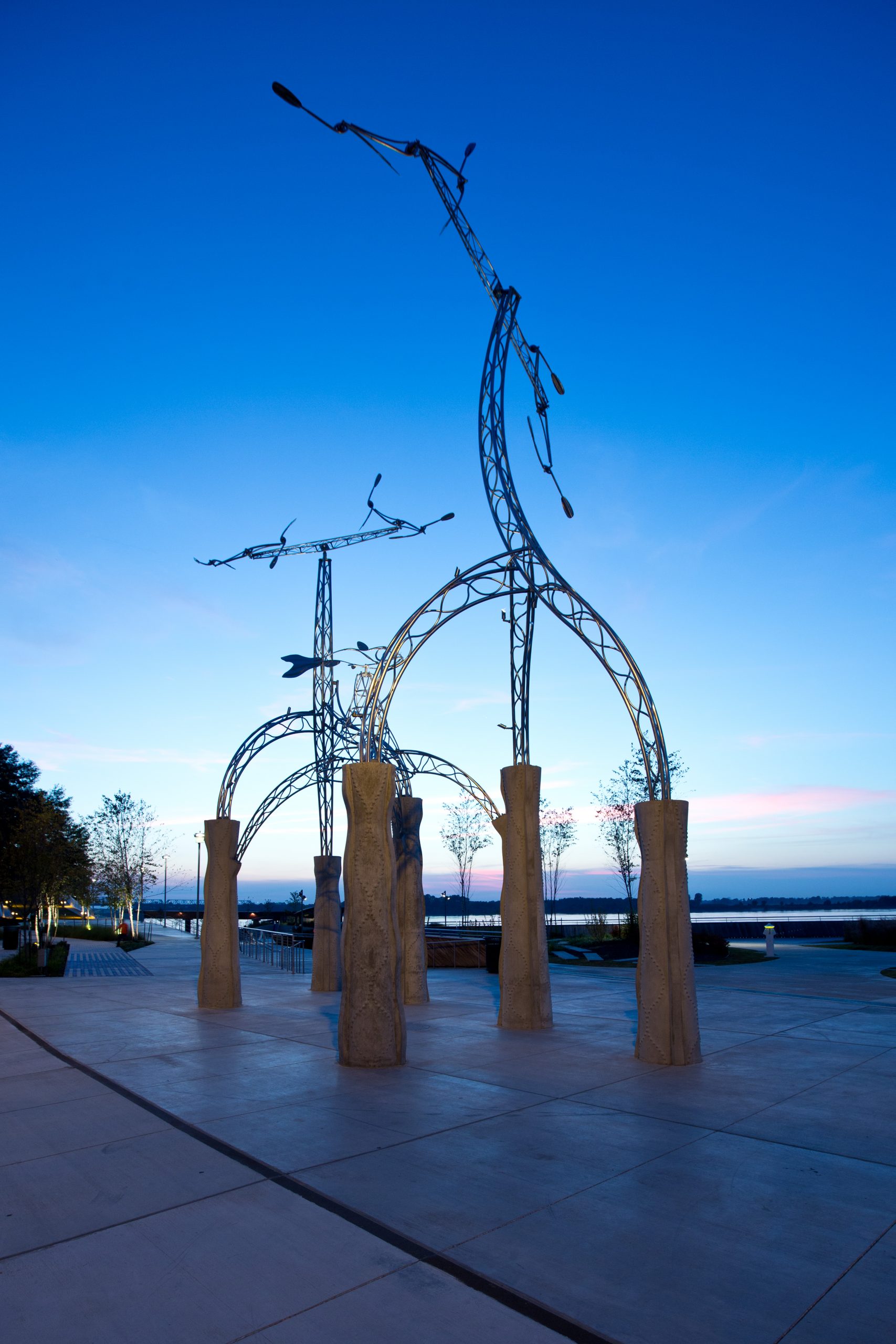 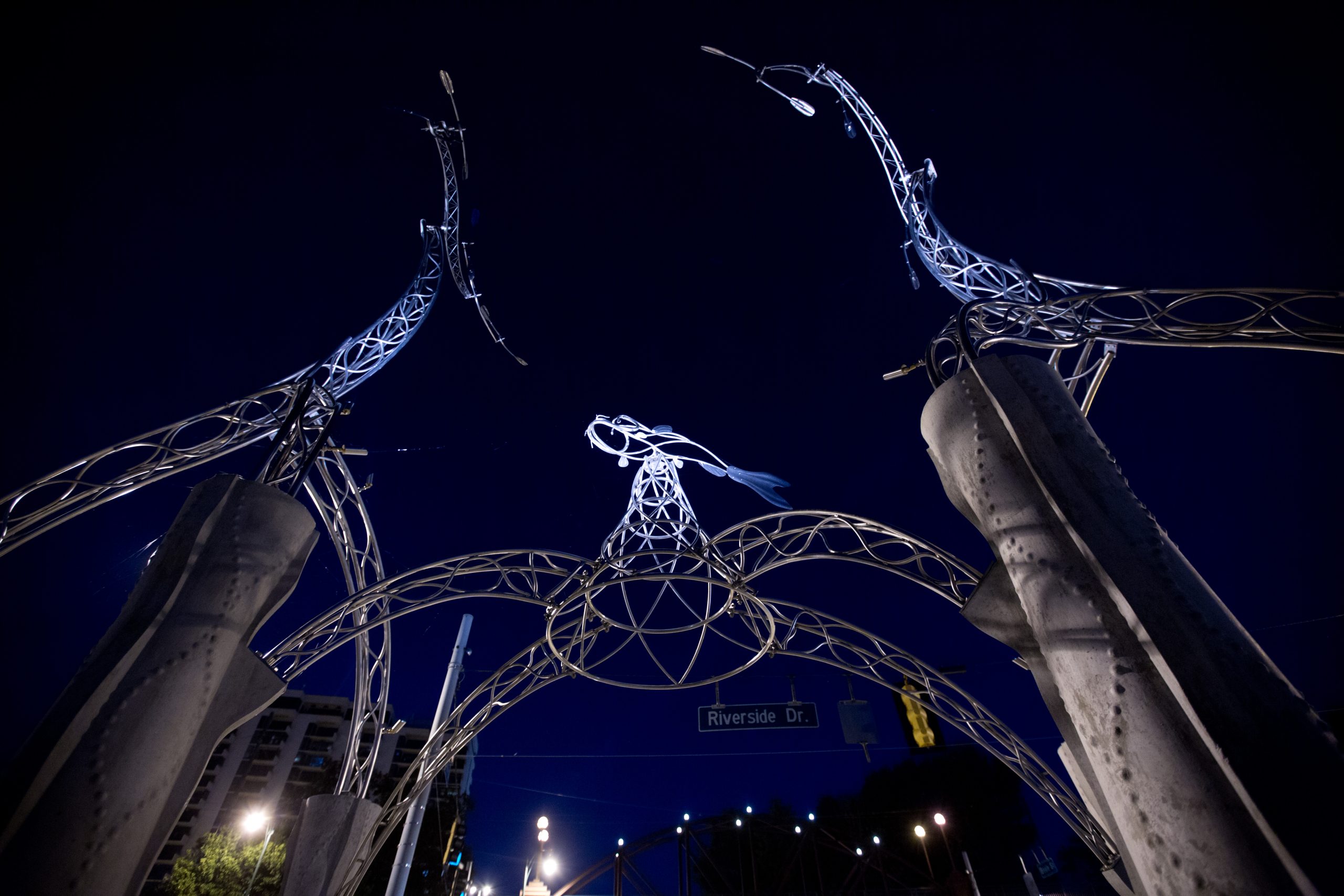 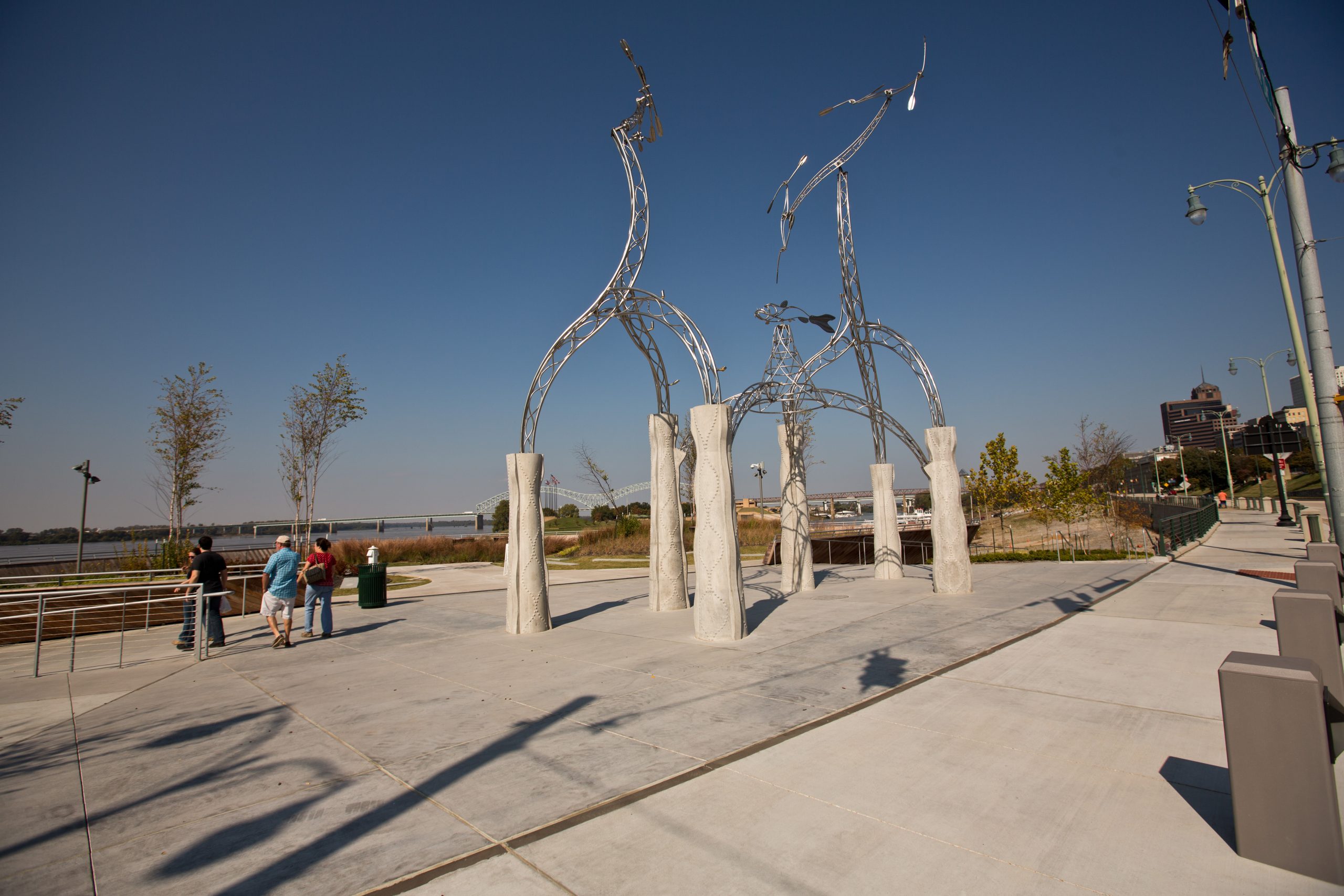 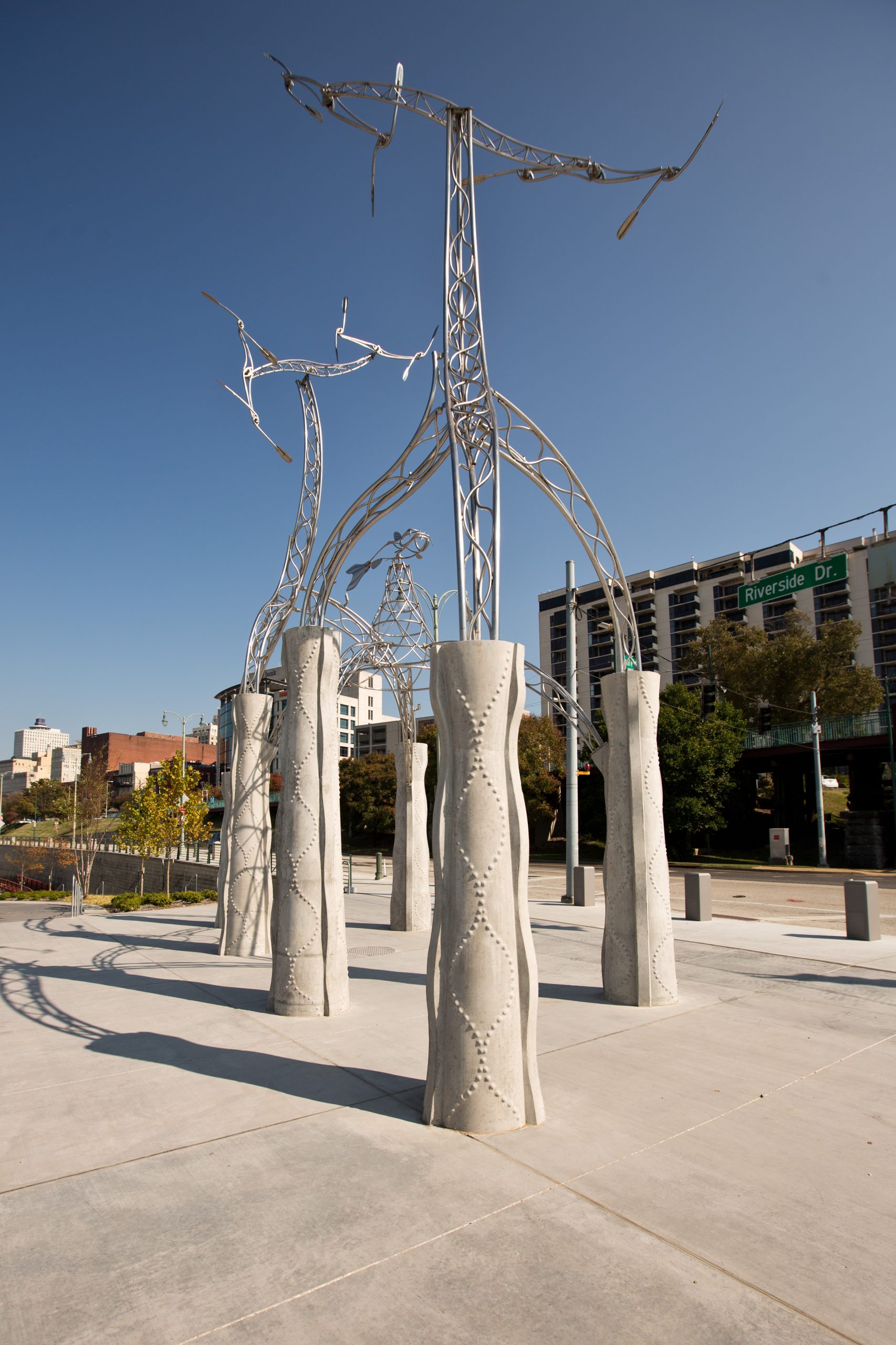 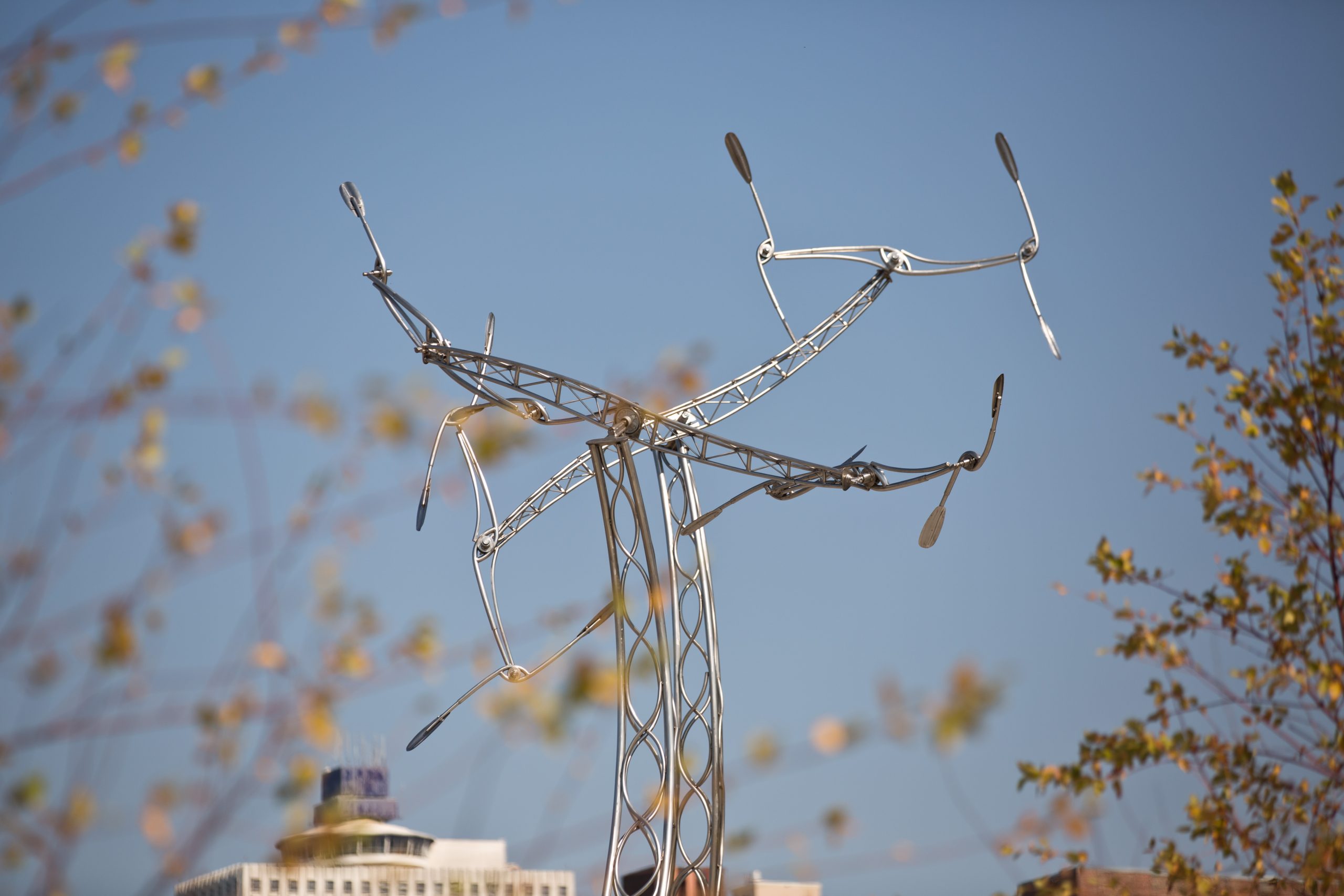 I am pleased to announce the completion of the monumental sculpture, MEANDER, for the UrbanArt Commission, City of Memphis, Tennessee. As the centerpiece of the Beale Street Landing development on the Mississippi River, this wind-powered kinetic sculpture is a fitting homage to the majesty of this great American waterway. MEANDER, a spectacular 45ft tall wind-powered kinetic sculpture of stainless steel and concrete, comprises two serpentine towers raised on sculptural cast concrete columns. The graceful towers are topped by large slowly rotating arms featuring precisely balanced “spinners” at each end. “MEANDER,” 2014, Memphis, Tennessee, Stainless Steel, Concrete, 46’H, 35’W, 13’D (OAD)

The design program of this public art site was defined by the intersection of two important axes. The first axis was that of Beale Street, a major east/west thoroughfare at the perimeter of Beale Street Landing. The second axis was the main/central axis of the park itself. A monumental public sculpture was to be located at this intersection, marking the primary access point to the Beale Street Landing and serving as the focal point of the park entrance. As one approaches the site from Beale Street, the sculpture (Meander) appears as a gate or portal to the park. However, upon arrival at the sculpture, the work creates its own 3-dimensional space for further contemplation of its dynamic/kinetic elements and the surrounding river views and vistas.

A concerted effort was made to create a work of art that fit into the larger scheme of the site's design and development. It was vitally important to ensure a marriage of the architect's overall aesthetic/plan for the park with the form and placement of the public sculpture that would serve as the entrance focal point. Extensive review of the architect's plans and ongoing dialogue throughout the project allowed for a fruitful collaboration from the outset. The sculpture was also designed with the collaboration and oversight of structural engineers regarding details of wind load and positioning the piece appropriately at the site. Lastly, the creation of this work of art was not possible without the successful collaboration with extremely skilled and talented concrete casting specialists in the fabrication of the massive sculptural columns at the base of Meander.