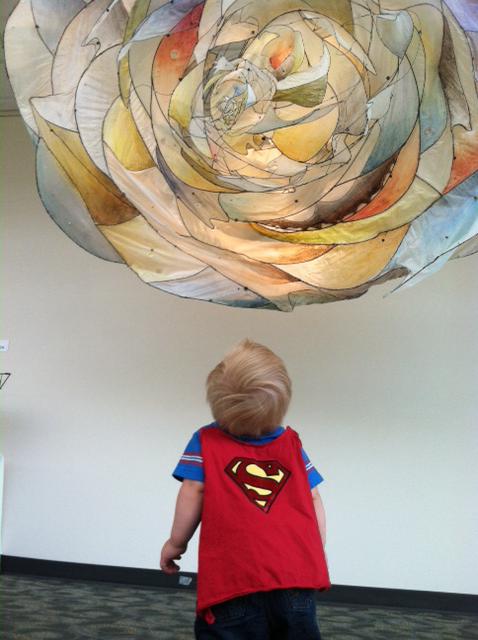 Created for the DeVos Convention Center, Grand Rapid MI. for Art Prize 2013. I collaborated with the DeVos Convention Center staff so that Galaxy would be hung in a location where viewers could look up into the artwork and be back lit to illuminate the piece. Using mixed materials such as soldered wire, gauze, adhesive, acrylic gels and color tints I constructed “Galaxy” by stretching fabric over a linear, soldered steel armature. This artwork investigates the micro and macro worlds and can be viewed as blooming flower or a distant galaxy. Dimensions: 8′ L x 5’H x 2’D

It was important the Galaxy have a "WOW" factor and float among several other artworks that were hung throughout the Convention Center. Since Art Prize is an International competition, I needed to create a large-scale artwork that would stand out among all the other artworks. Housed in the DeVos- after 16 days of voting in the world’s largest art competition, 1524 artists, 168 venues. 500,000 visitors. 446,850 votes cast- "Galaxy" was voted into the top 100.

The process was very exciting- I had to write and design a proposal along with sending photos of previous/similar artworks. Once my proposal was posted on the Art Prize- Venues Seeking Artists site, I had to wait to see which venues would select my artwork to be housed in their public space. Venues ranged anywhere from Museums, Churches, Coffee Shops and Business Centers. My proposal was invited to be exhibited by several Venues, but I eventually chose the DeVos Convention Center because it was a large, open and airy space with a lot of foot traffic. I spoke several times on the phone with the DeVos coordinator and he sent me a floor plan along with pictures of the space. I chose my site location and began creating.

The story behind the photo of the little boy looking up at "Galaxy" was told to me by his father Mr. Kent, who sent me this picture... His son was running up and down the isles of Convention Center. After chasing behind him for an exhaustive period of time, his son suddenly came to halt in front of Galaxy, looked up and stood still! In a state of shock and relief, pooped out Mr. Kent, quickly shot this photo of his son, whose name happens to be Clark Kent. -Which explains the cape.