Our Single Garment of Destiny - CODAworx 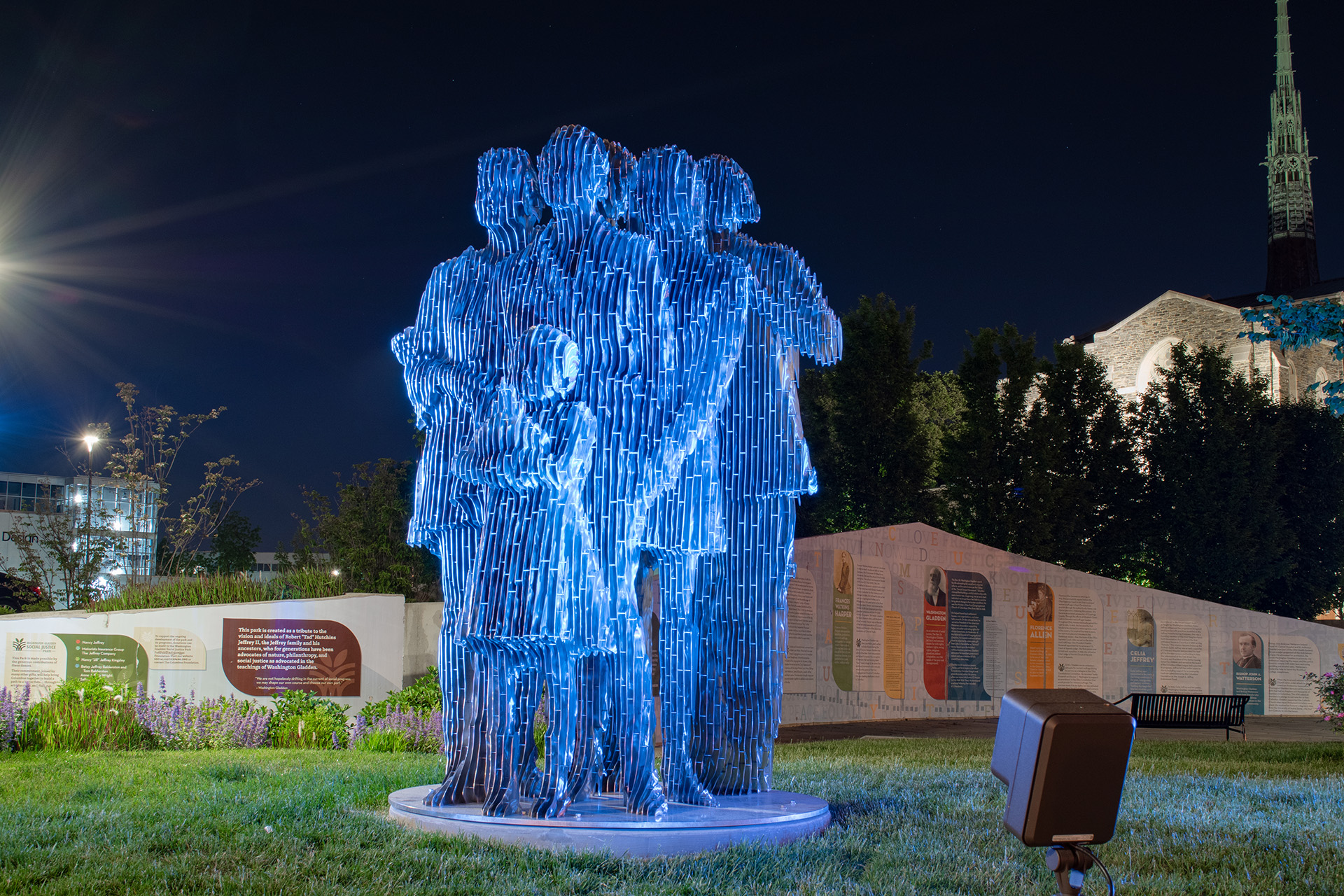 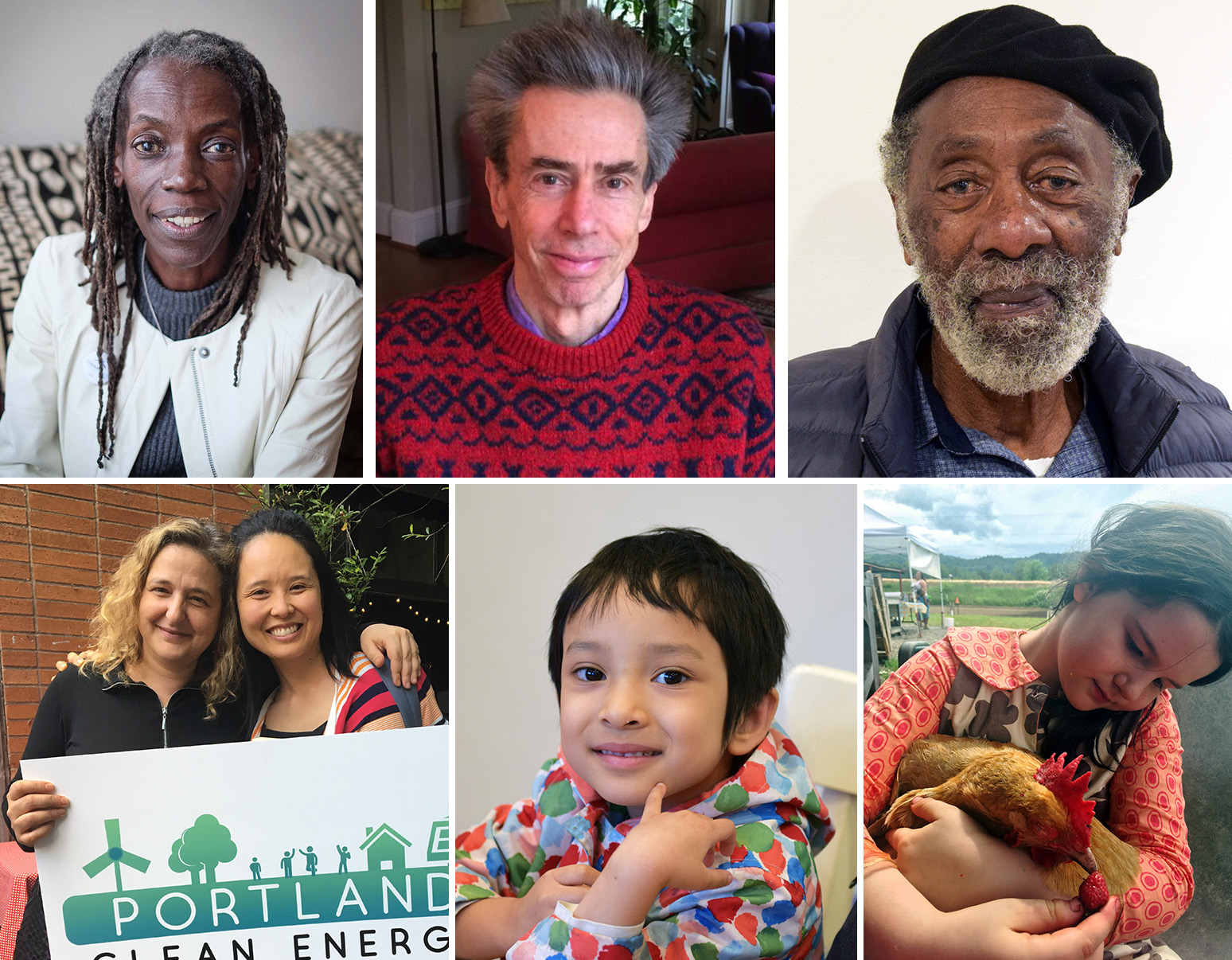 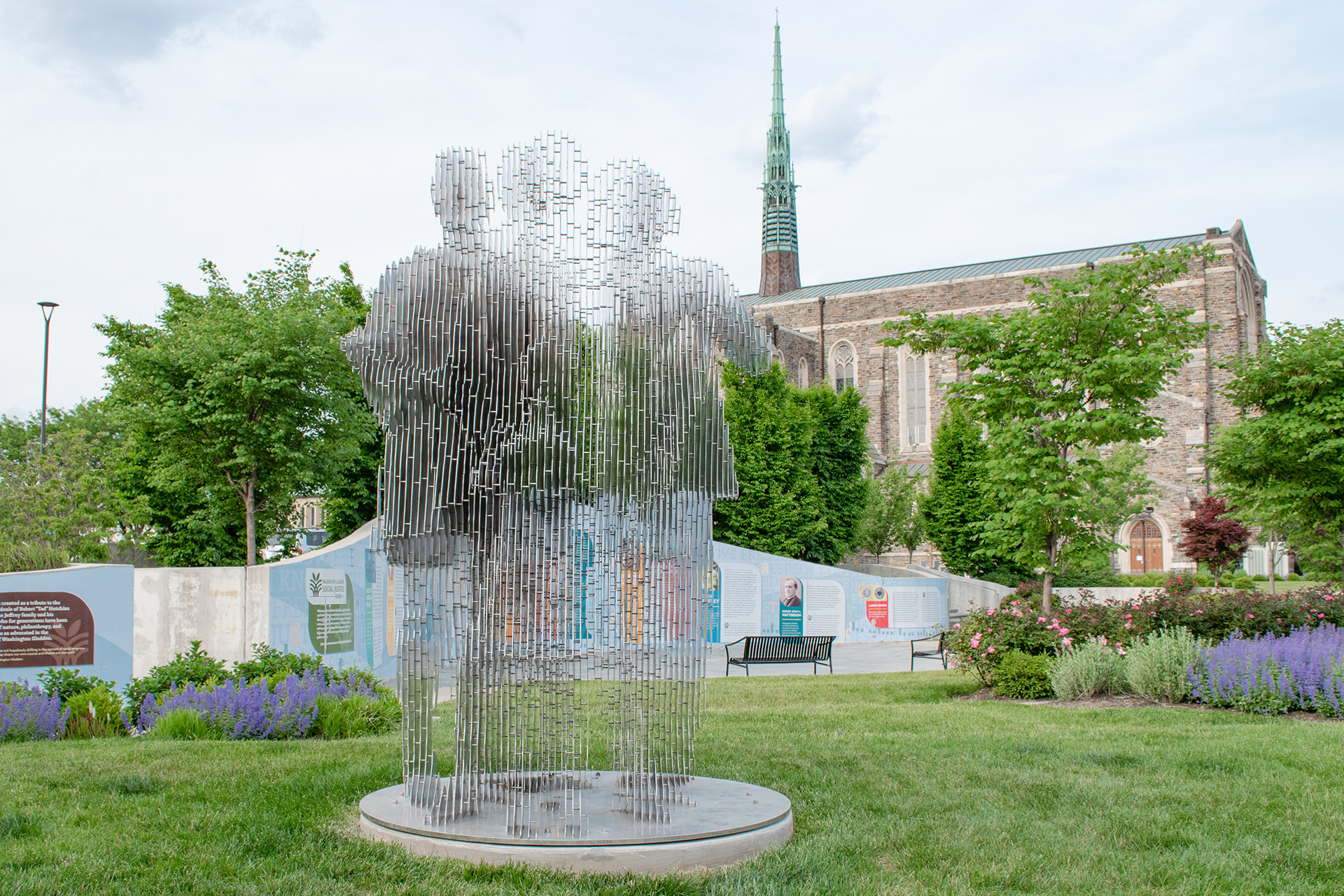 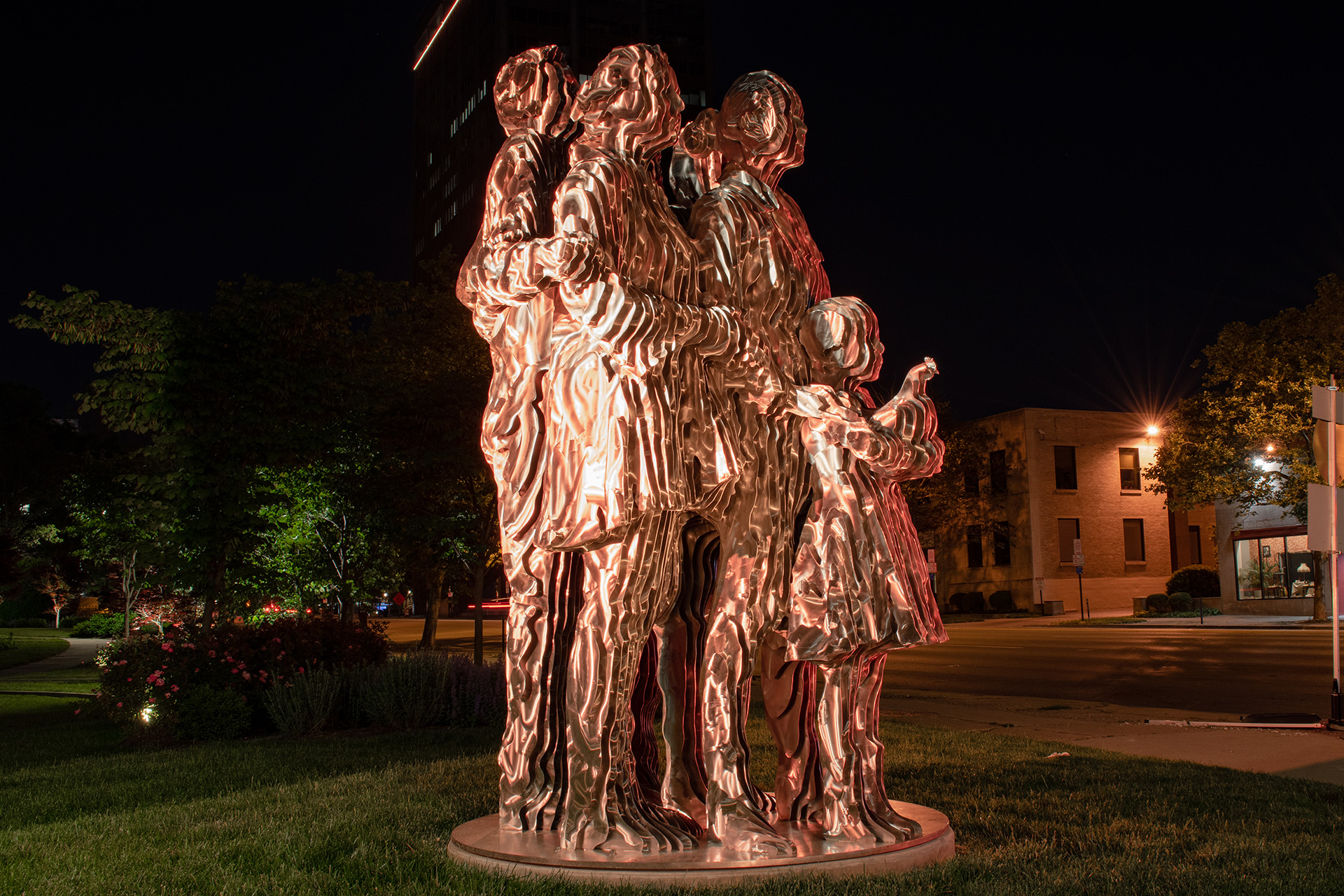 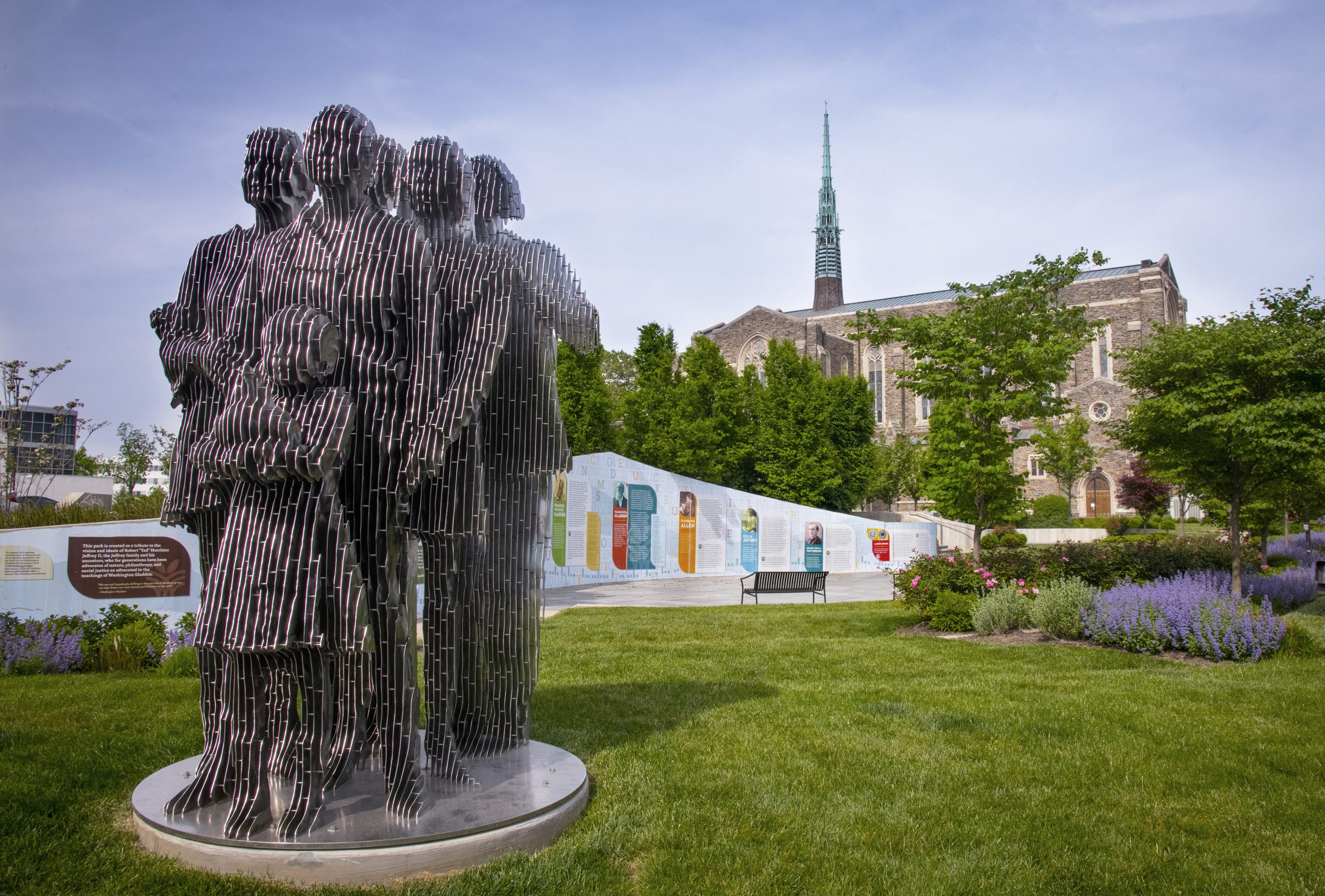 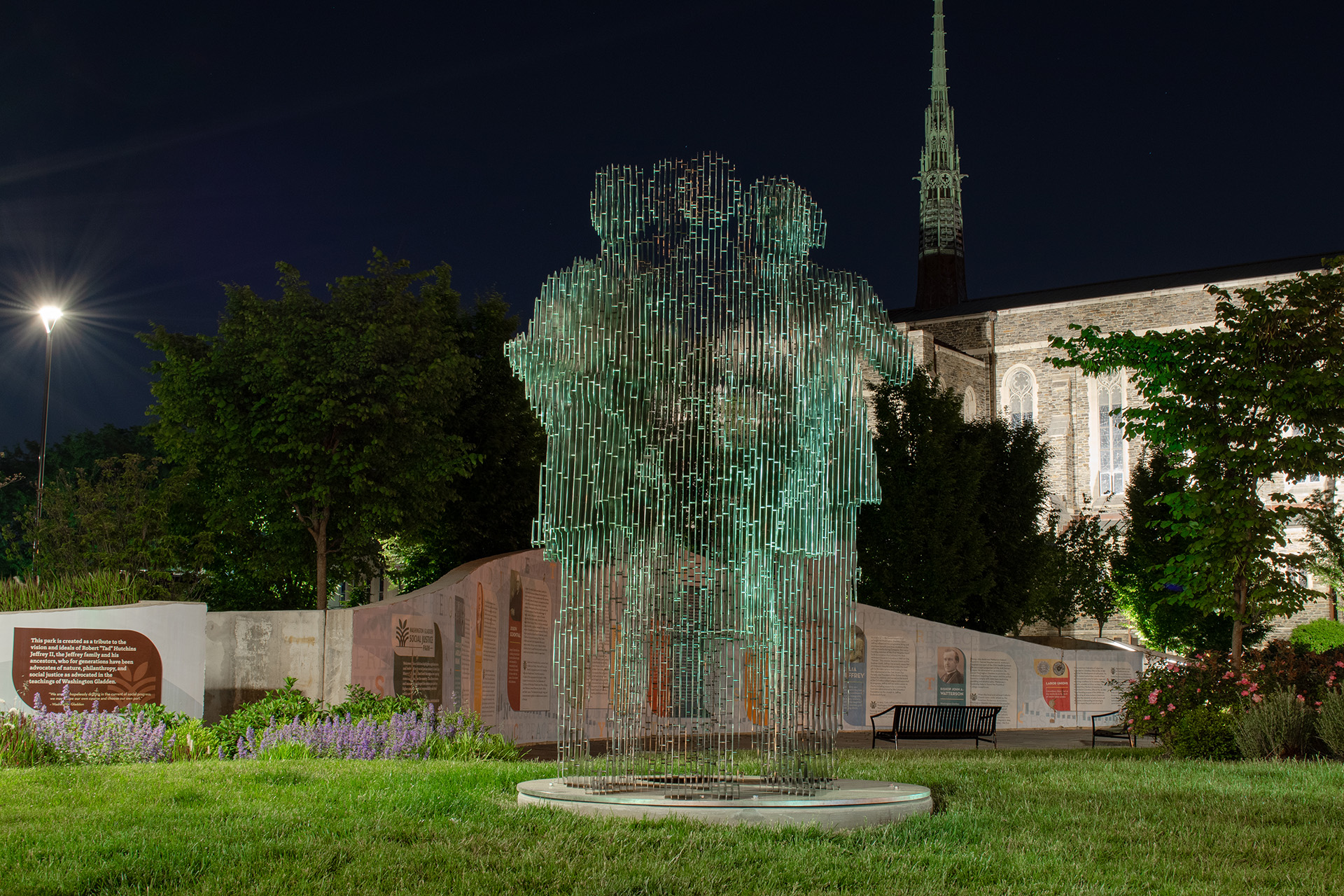 Individuals unite and merge into a coherent whole to make the world a better place. “Our Single Garment of Destiny” is the signature artwork for the nation’s first park dedicated to the theme of social justice. Inspired by Dr. Martin Luther King’s legacy and words, the 6,000-pound, 10’-tall stainless steel work depicts a group of five activists and a child holding a chicken. While their individual facial features are still recognizable, their bodies start merging into one.

The sculpture, with its quantum wave-like structure serves as a dual metaphor: how a small group of diverse -yet unified- people can build movements for social justice, creating ripples that emanate and can grow into waves of transformational change; it is also a metaphor that despite differences in race, religion, gender, sex, ability, age, and species, we are ultimately all part of the same oneness, or as MLK Jr. wrote, we are all “tied in a single garment of destiny”.

The Washington Gladden Social Justice Park, located in the heart of downtown Columbus (Ohio) opened in October 2018 as the nation’s first park dedicated to the theme of social justice. The park’s goal is to bring the city together to build the path to a better future through art, dialogue and action for social justice. The park features a stage-like central area and landscaping that symbolizes ripples emanating from the center. The goal for the park’s signature artwork was to create a striking metaphor for social justice.

The sculpture’s winning design was selected based in a national competition in 2019. “Our Single Garment of Destiny” picks up that idea of waves of change emanating through society. Julian's background in quantum physics inspired the parallel slices style used to portray the group as interconnected quantum waves. At that moment, when the viewer faces the group’s gaze eye-to-eye, the sculpture becomes transparent and; all one sees is the light reflecting off the plates’ cut edges, almost like an apparition, revealing the view into the stage-like center of the park. It portrays that fundamentally we are all interconnected, and that solidarity, compassion and moral actions are the natural consequence of our recognition of this underlying nature of reality.

The models for the sculpture were part of a group of people responsible for envisioning and eventually winning the Portland Clean Energy Fund (PCEF) measure, the nation’s first-ever successful climate justice initiative created and led by communities of color that now serves as a national model. In order make the metaphor more complete, we included Gingy, a rescue chicken, as a symbol of how other species and living ecosystems are also part of the oneness and inter-related structure of reality. When we cause harm and suffering to others, we are simultaneously inflicting suffering upon ourselves. If we can transcend the ultimately artificial notion of being separate from each other, and instead act as the single garment of destiny we are, we will be capable of healing ourselves and the world from the existential crises we are facing. The experience of the viewer walking around the sculpture also contains symbolism: viewed from the side the sculpture initially appears as solid metal, but as you walk by, it becomes transparent and almost disappears, representing all of the struggling people and animals who become invisible to society whether by neglect or intention, yet they are still present and an essential part of our community and ecosystem, tied in a single garment of destiny.