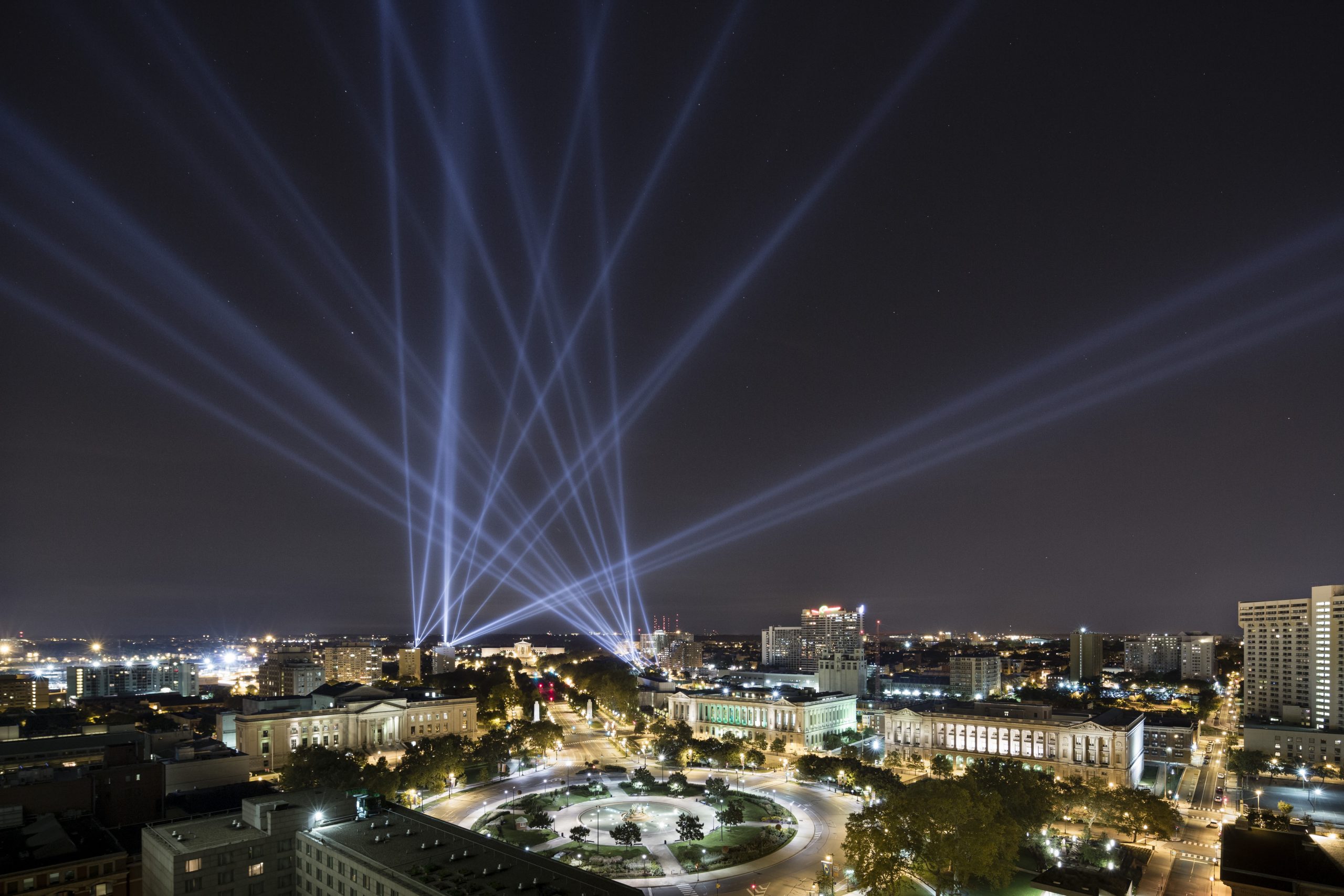 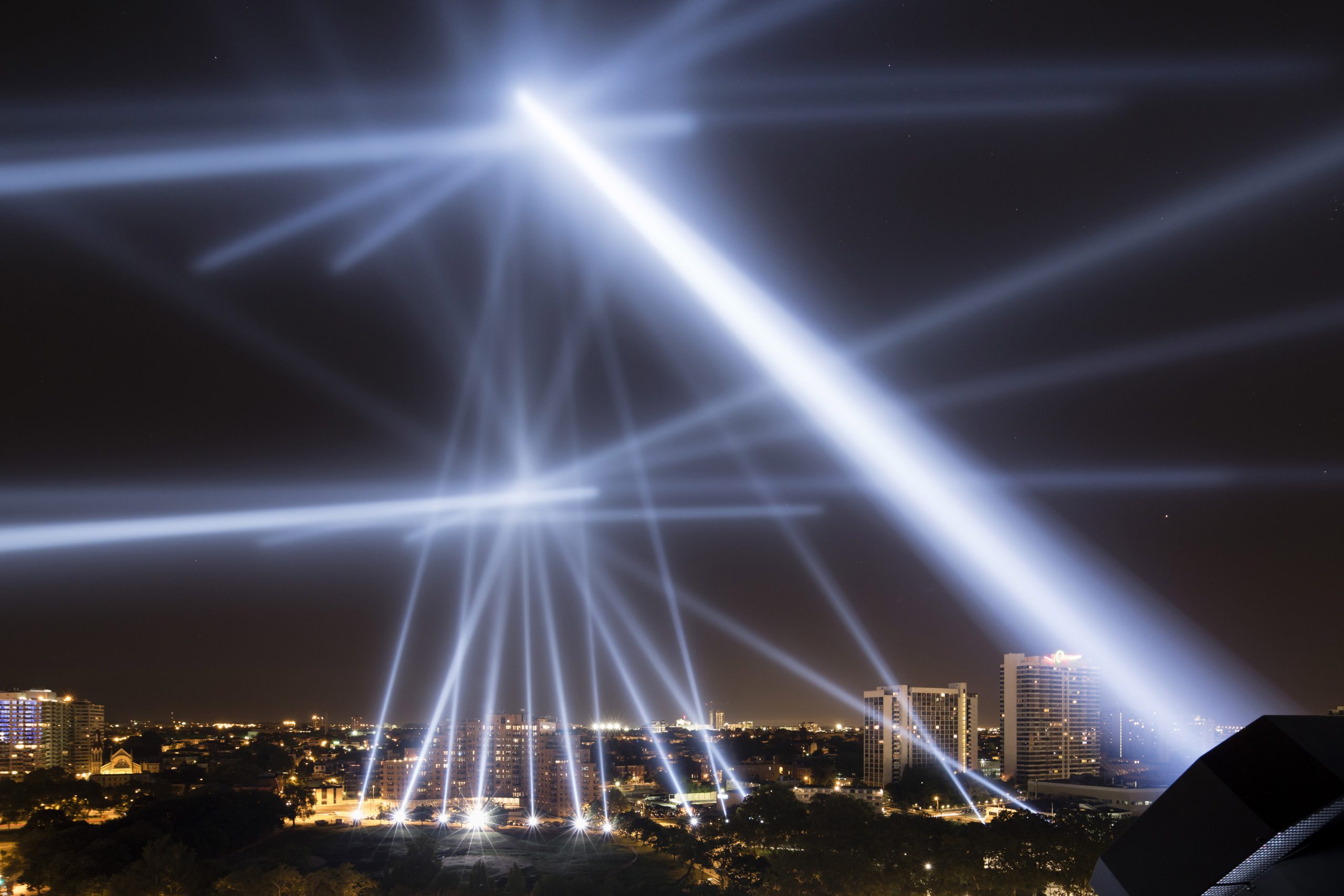 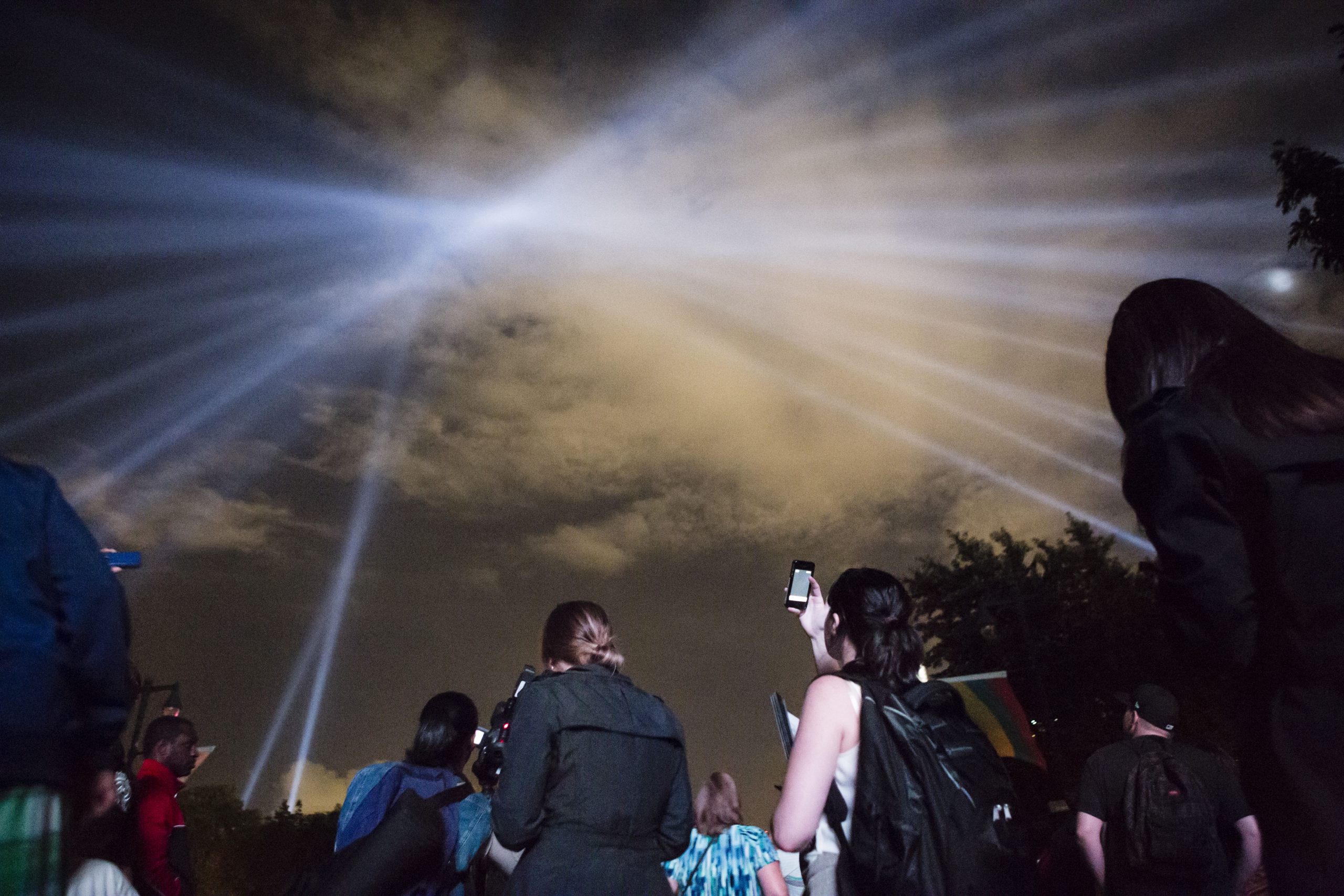 Rafael Lozano-Hemmer’s OPEN AIR, commissioned by the Association for Public Art, was an interactive light experience that transformed Philadelphia’s Benjamin Franklin Parkway from September 20 – October 14, 2012. Using a free mobile app and website developed and designed by Lozano-Hemmer’s studio, Antimodular, participants recorded and submitted messages. In response, 24 powerful robotic searchlights along a half-mile section of the Parkway created dynamic light formations in the night sky. The lights reacted in brightness and position to the frequency and amplitude of participants’ recordings, which could be heard through the app, the project website and speakers on the Parkway.

OPEN AIR was created specifically for the City’s Benjamin Franklin Parkway as a platform for public participation. Lozano-Hemmer was inspired by Philadelphia’s rich tradition of democracy and respect for free speech. OPEN AIR represented an intersection of visual art, architecture, and performance art – between controlled, programmed artwork and uncontrolled spontaneous audience interaction. It was a visible voicemail system, a rant line, a public stage, and an archive of recordings from Philadelphia’s past and present. Even with its monumental size and its wide visibility (up to 10 miles away), the project was designed to attract personal participation that created a sense of global connection, complicity, and public agency. The fanning searchlights responded to a community of voices and were activated by the participants’ messages and GPS locations. The roving lights celebrated individuality and community as people from all walks of life gathered to participate, watch, listen, and socialize. OPEN AIR attracted constant, personal participation and promoted the Parkway as a safe and engaging nighttime destination for arts and culture.

Throughout the project, the artist and the Association for Public Art collaborated with many public and private groups and communities. The artist’s Antimodular studio and the digital production agency, Turbulent, programmed and developed OPEN AIR, and Matane Productions and Syncrolite managed staging and logistics, coordinating with the City of Philadelphia during planning. To give participants an optimal viewing experience, the City’s Streets Department turned off the Benjamin Franklin Parkway’s main streetlights and closed its lanes to car traffic. OPEN AIR was also presented in conjunction with the Philadelphia Live Arts Festival (now FringeArts) and the DesignPhiladelphia Festival, both citywide festivals dedicated to delivering quality design and performance experiences. Importantly, to kick-off each evening, diverse community groups and their messages were featured when the lights were turned on. Community groups included nonprofits Project H.O.M.E (dedicated to fighting homelessness) and William Way Community Center (advocates for the LGBTQ community); arts organizations Art Sanctuary, UbuWeb, and Grizzly Grizzly gallery; and many more. The project also had a curated archive - the “Voices of Philly” - compiled in collaboration with public radio station WHYY, which featured messages of 127 famous Philadelphians, including Louis Kahn, M. Night Shyamalan, Will Smith, Tina Fey, and ?uestlove.

Thousands of people from all over the world participated in Rafael Lozano-Hemmer’s OPEN AIR, making it the largest crowd-sourced public art project in Philadelphia. There were more than 1 million visits to the project’s website from 92 countries and nearly 6,000 messages were left in 20 languages. The OPEN AIR app was downloaded over 7,000 times, and an estimated 17,000 people visited the Parkway during the project. 3,000 people attended the opening night celebration, and many more shared their experiences via photos and comments because the project meant something to them and they felt rewarded for their engagement. http://openairphilly.net/