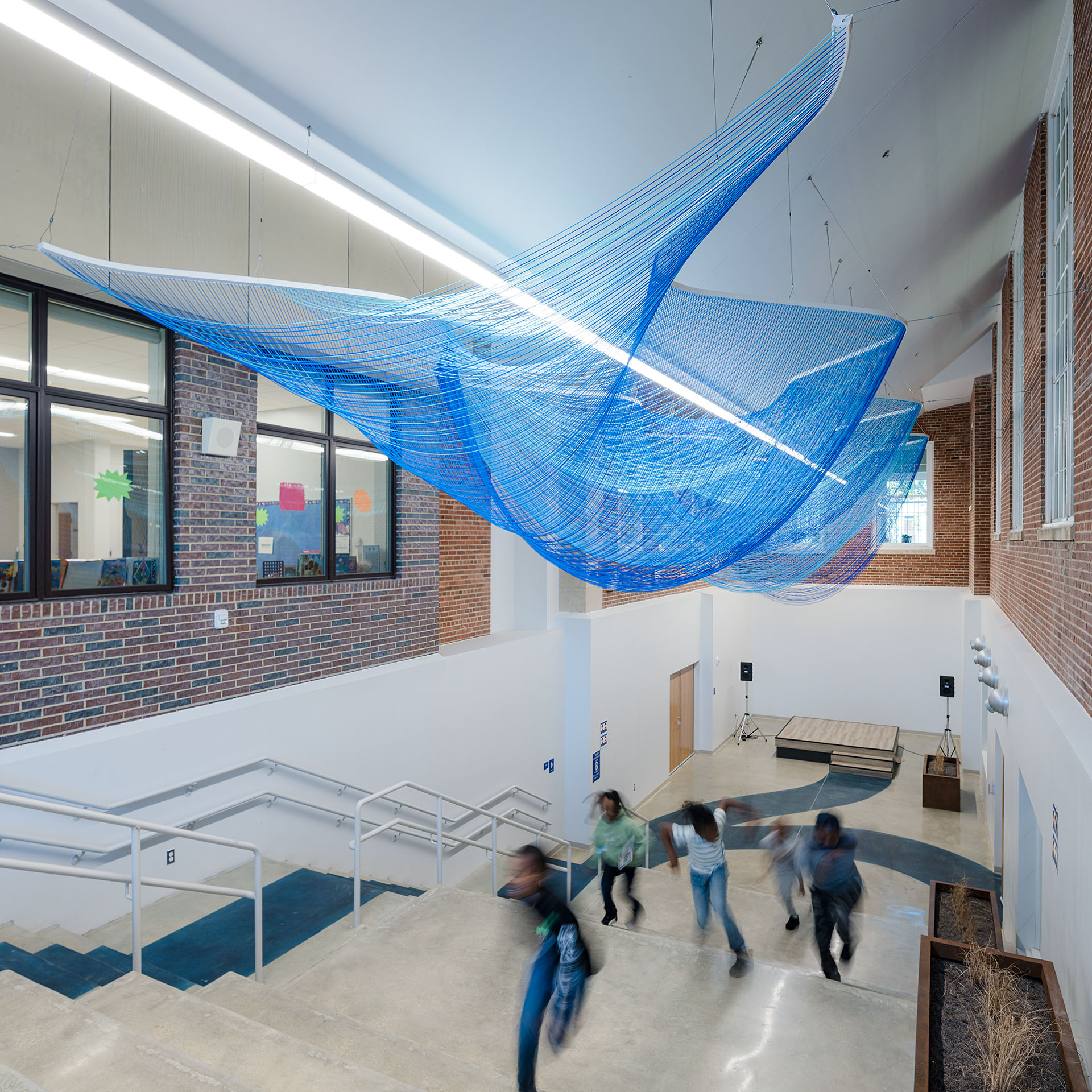 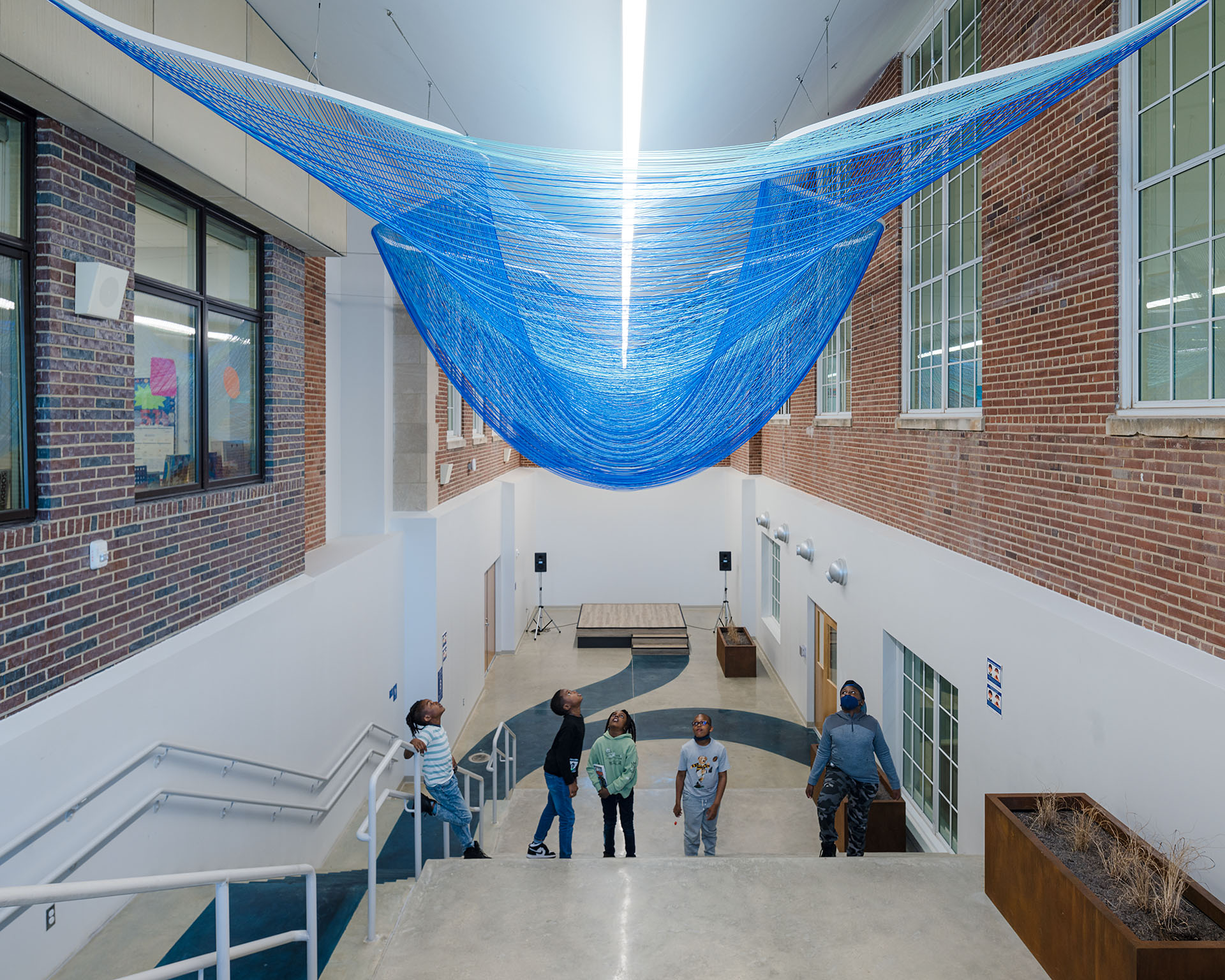 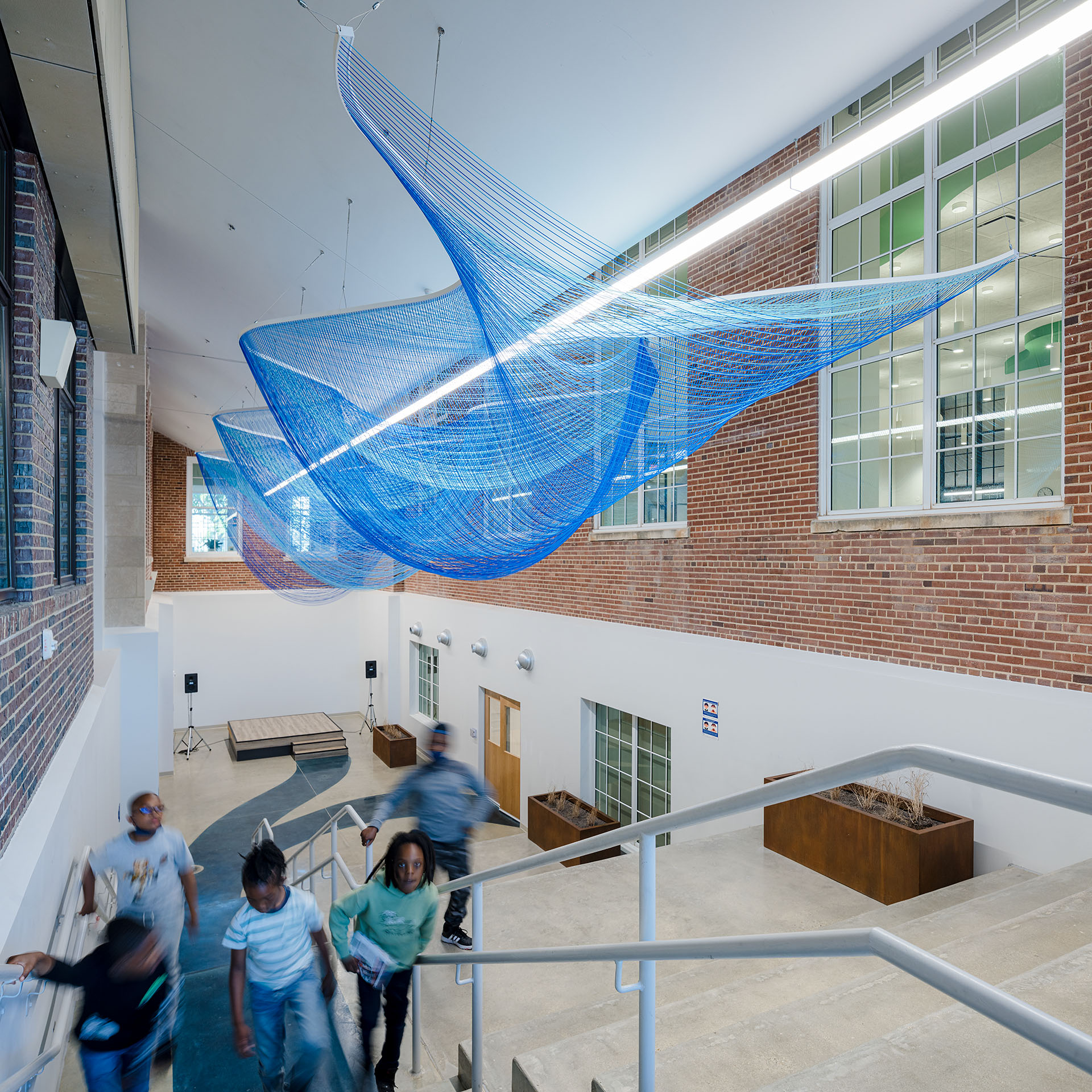 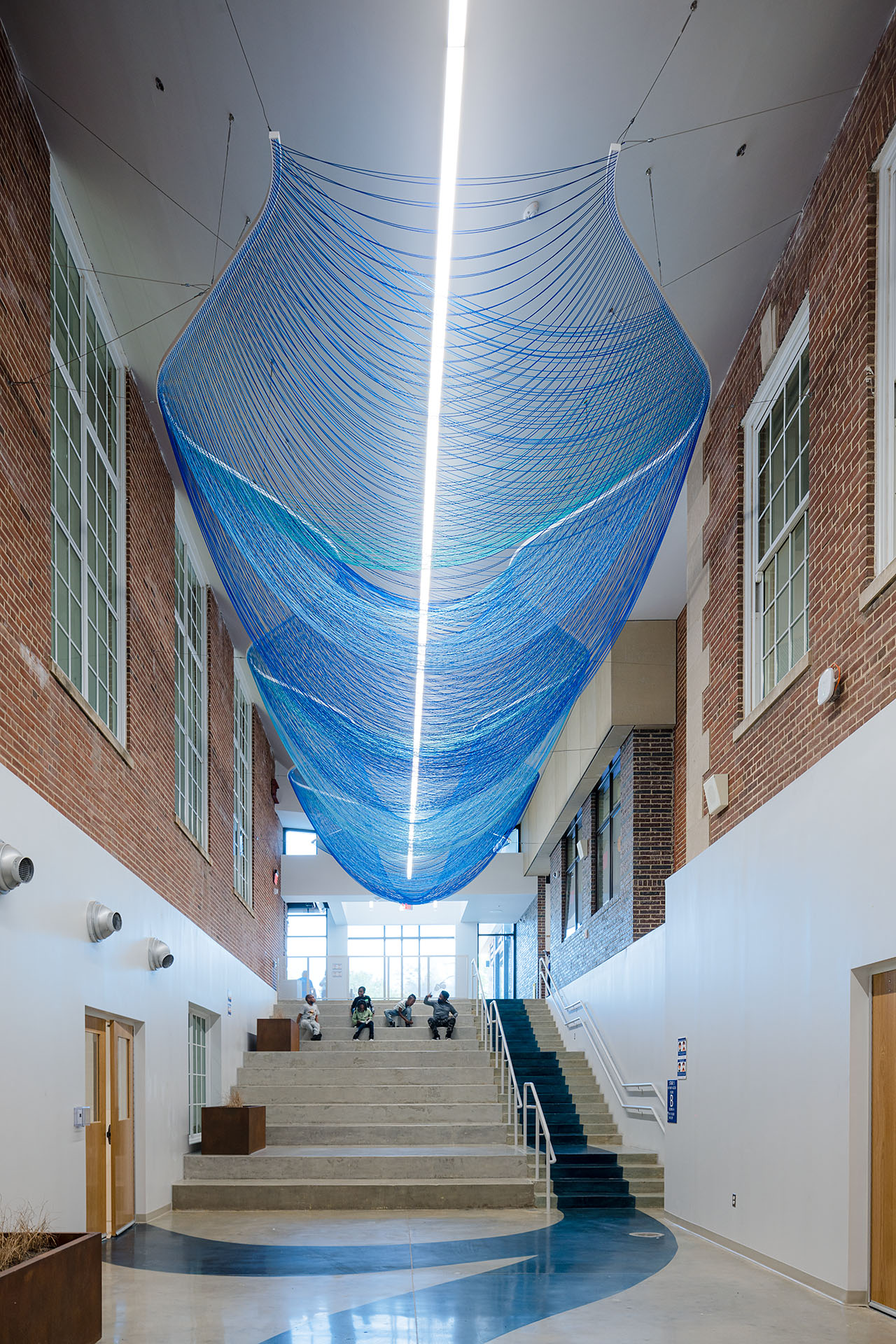 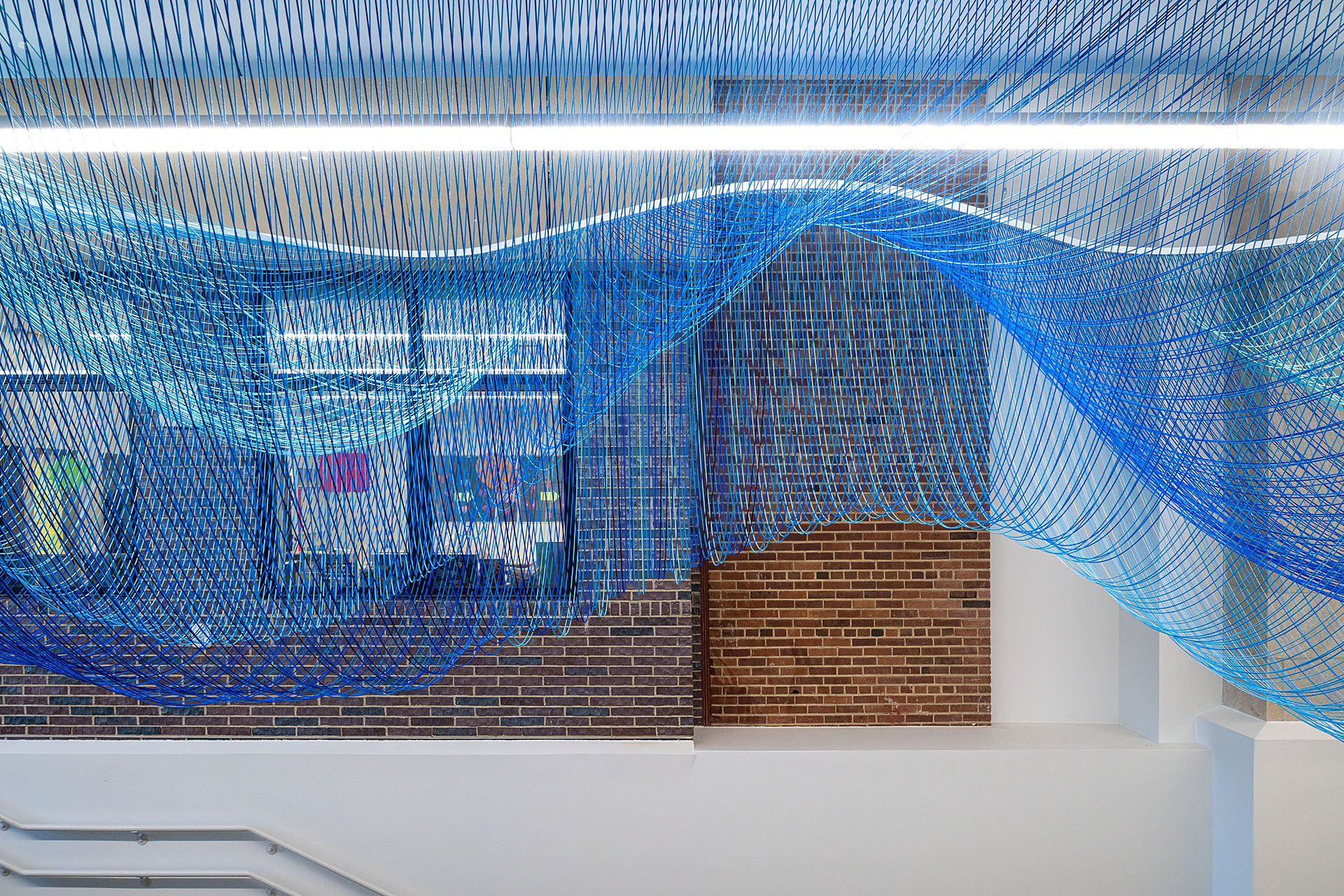 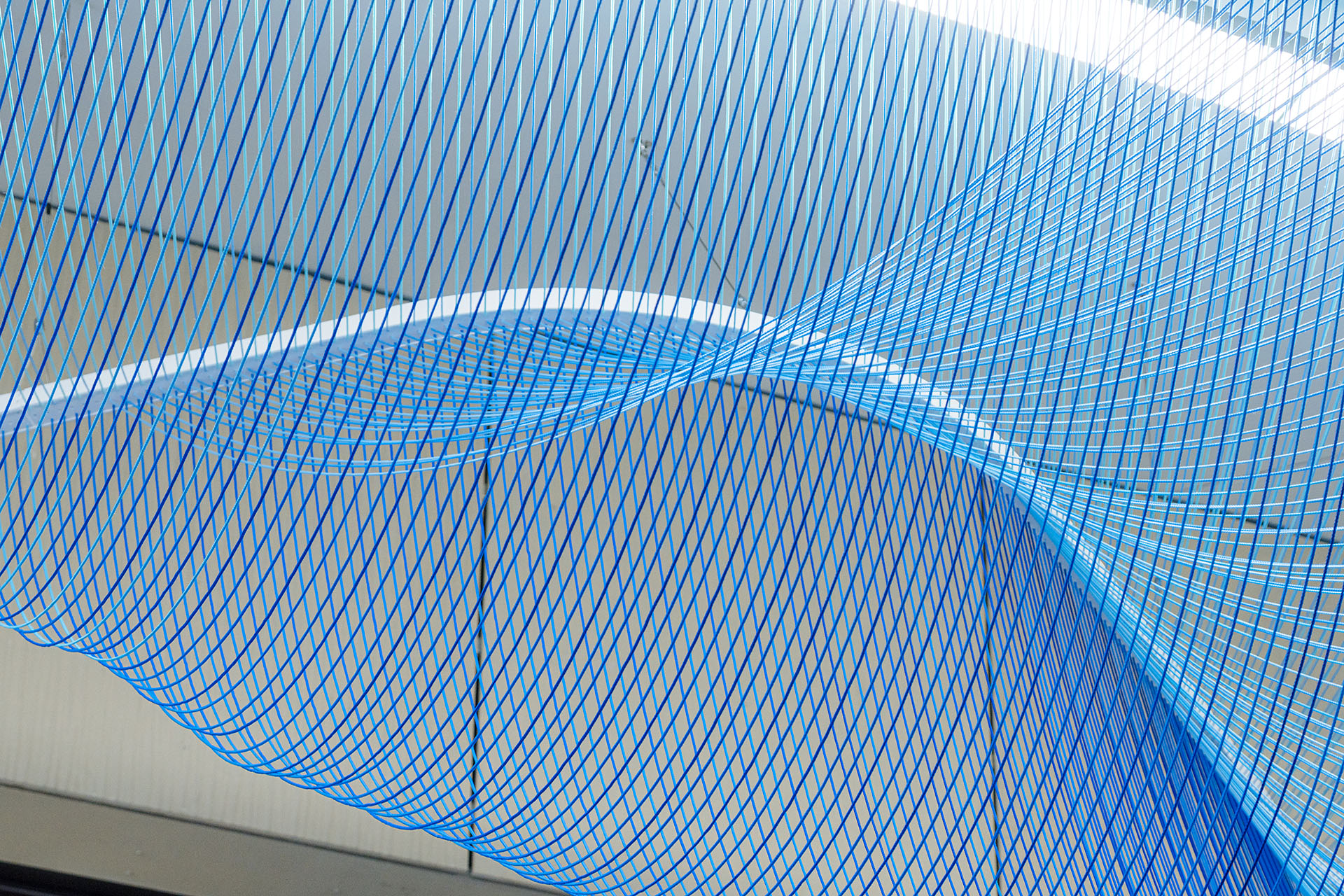 Ola – Spanish for sea wave – evokes the forces of the sea. Winner of the Washington DC Department of General Services “Percent for Art” competition, the interior installation at Capitol Hill Montessori School at Logan inspires students´ curiosity about the natural World.

Influenced by the Montessori principles of connection with nature, the suspended installation redefines the ceiling through a waveform that moves from a deep wave at the end of the gallery to a shallow break at the top of the staircase.

The catenary structure – three layers of undulating polypropylene blues hues cords- hangs from an aluminum horizontal wave attached to the ceiling. Walking through the gallery, the overlapping cords which slightly vibrate, create an illusion of flowing in a submerged environment.

The Discovery Commons West Wing Gallery, where the artwork is located, is a bare space in between buildings with a V-shaped ceiling and a continuous light fixture that is challenging to integrate. The sculpture adapts to these conditions by floating inside the volume making a strong statement in the space.

The large and long sculpture maximizes the space. The aluminum structure has a wavelength proportional to the distance in between the sprinkler heads to comply with fire code´s clearance. The deep catenary´ strings are congruent with the highest ceiling while the shallower curves follow the staircase angle. The existing dropped ceiling called for a very light structure. There was no budget for modifying the lighting.

Given a few unique conditions in the space, the design process took time. Initially, the ceiling was expected to be glass and I proposed using fabric as a base material. However, the glass was covered and due to this and the sprinkler system, I decided to use a more permeable material- string.

We also measured the new space conditions and evaluate the ceiling supports. The artwork came preassembled in pieces but the strings needed to be adjusted on site. We had to use a scaffold as there was no access that would fit an articulated boom lift. As customary, the project required a lot of coordination with the architects, contractors, installers and the school.