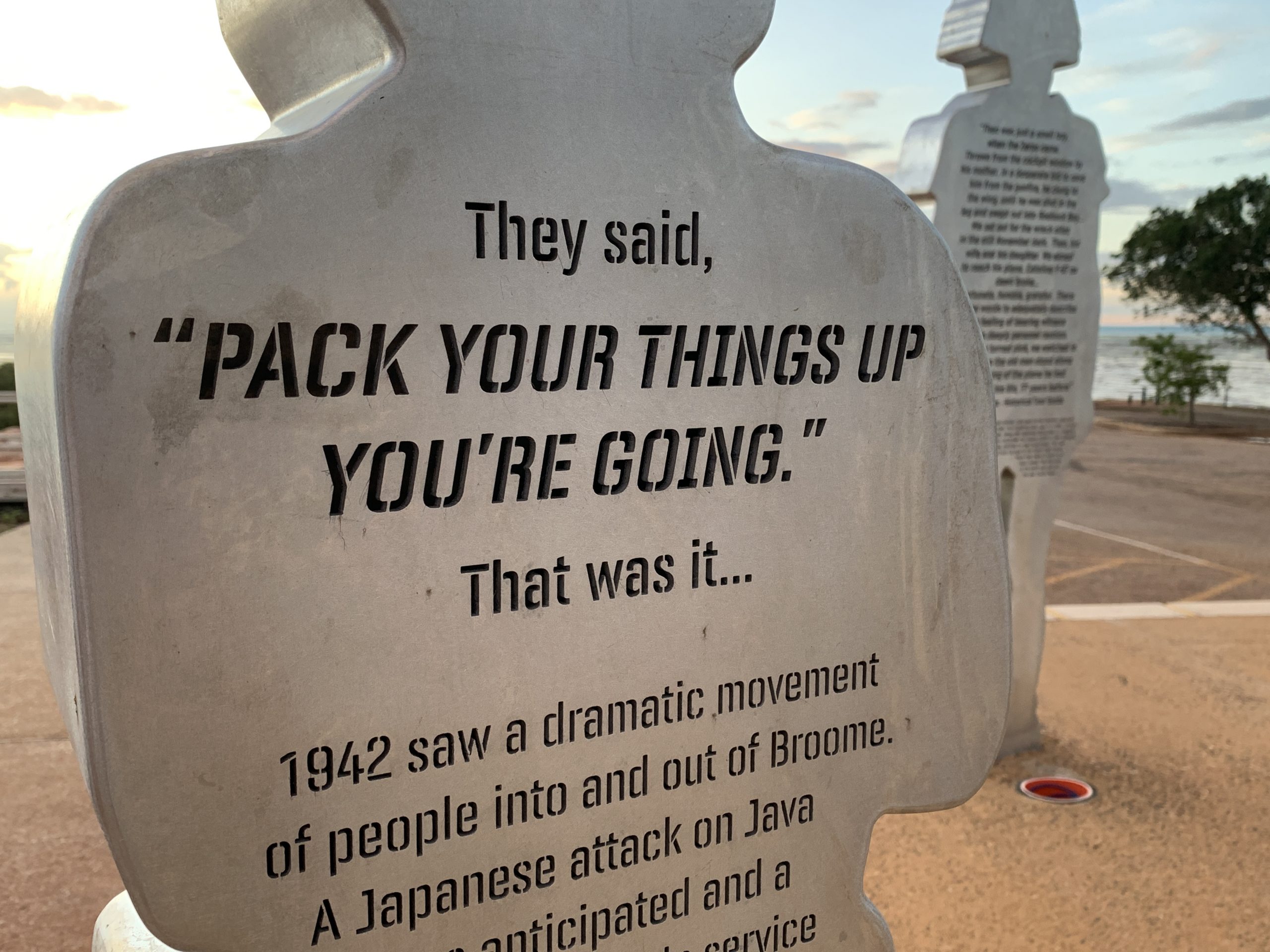 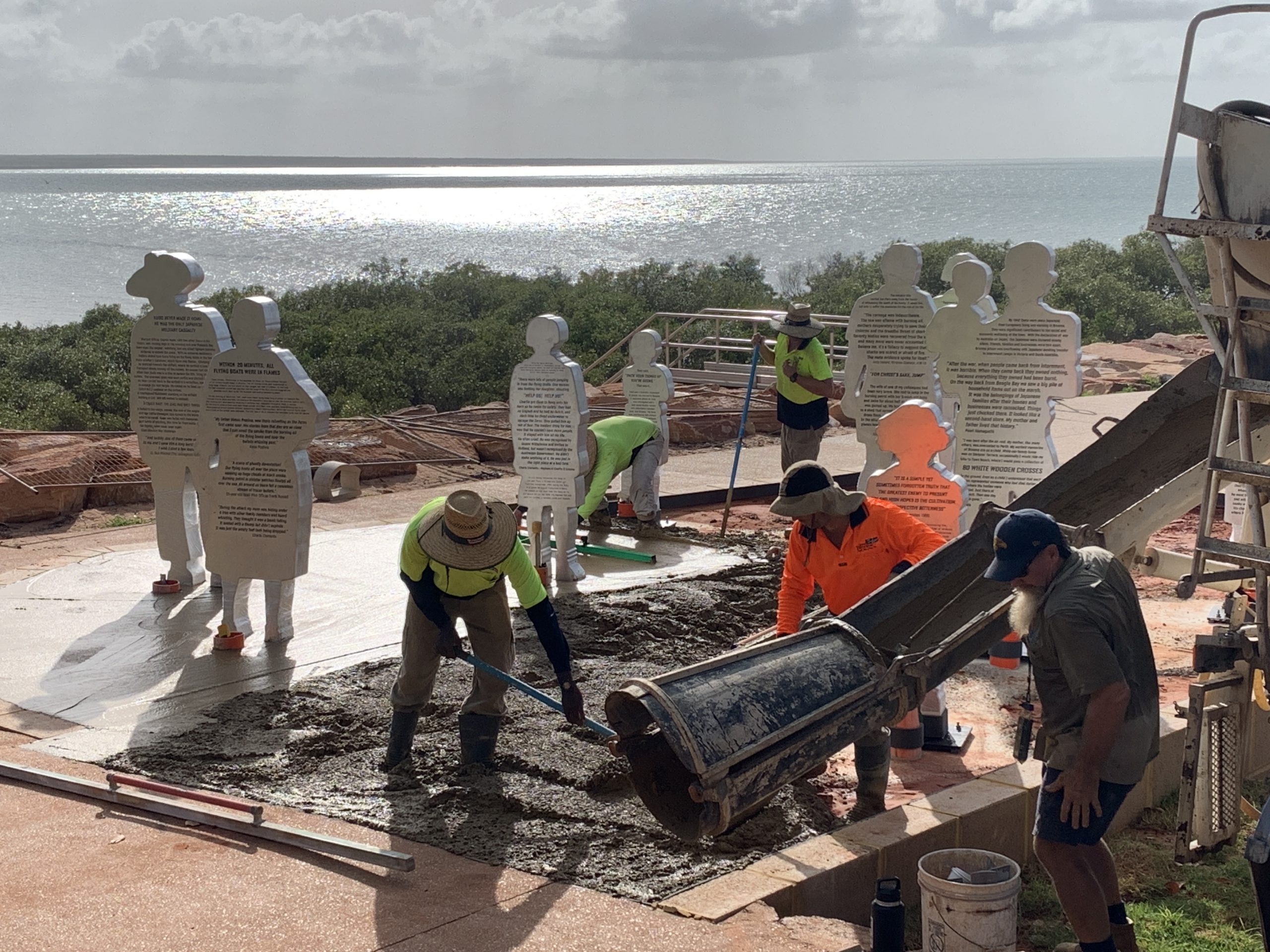 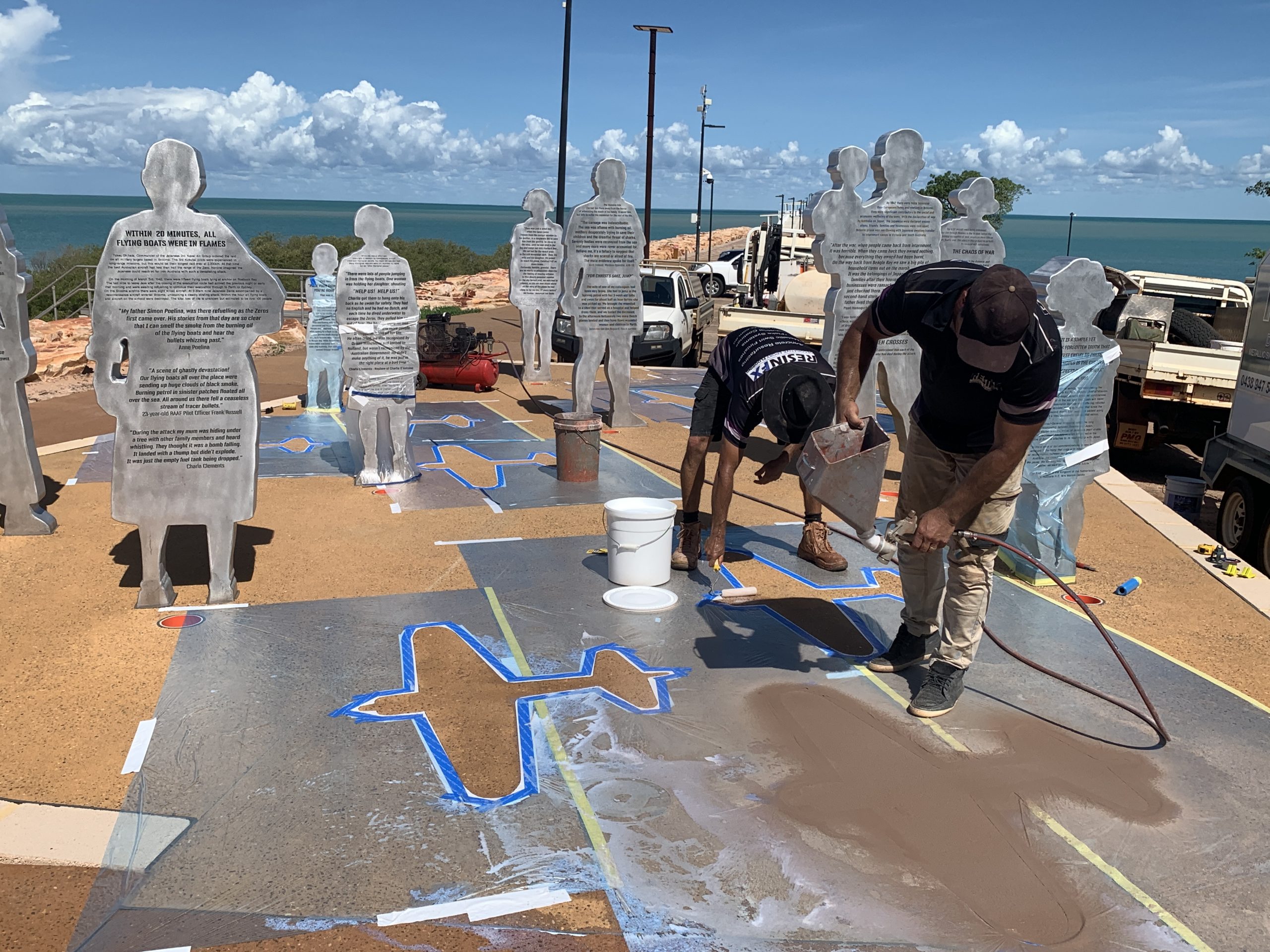 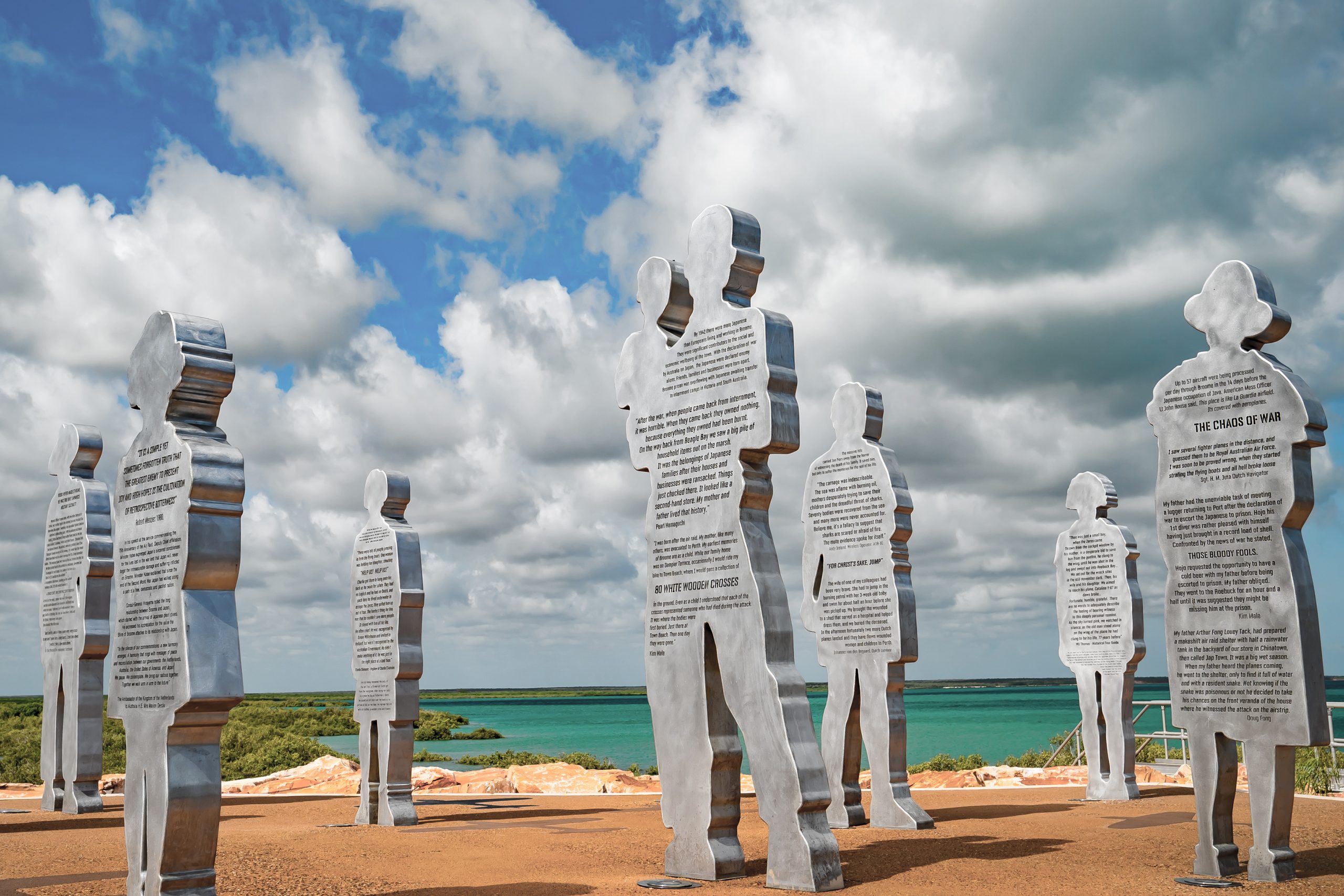 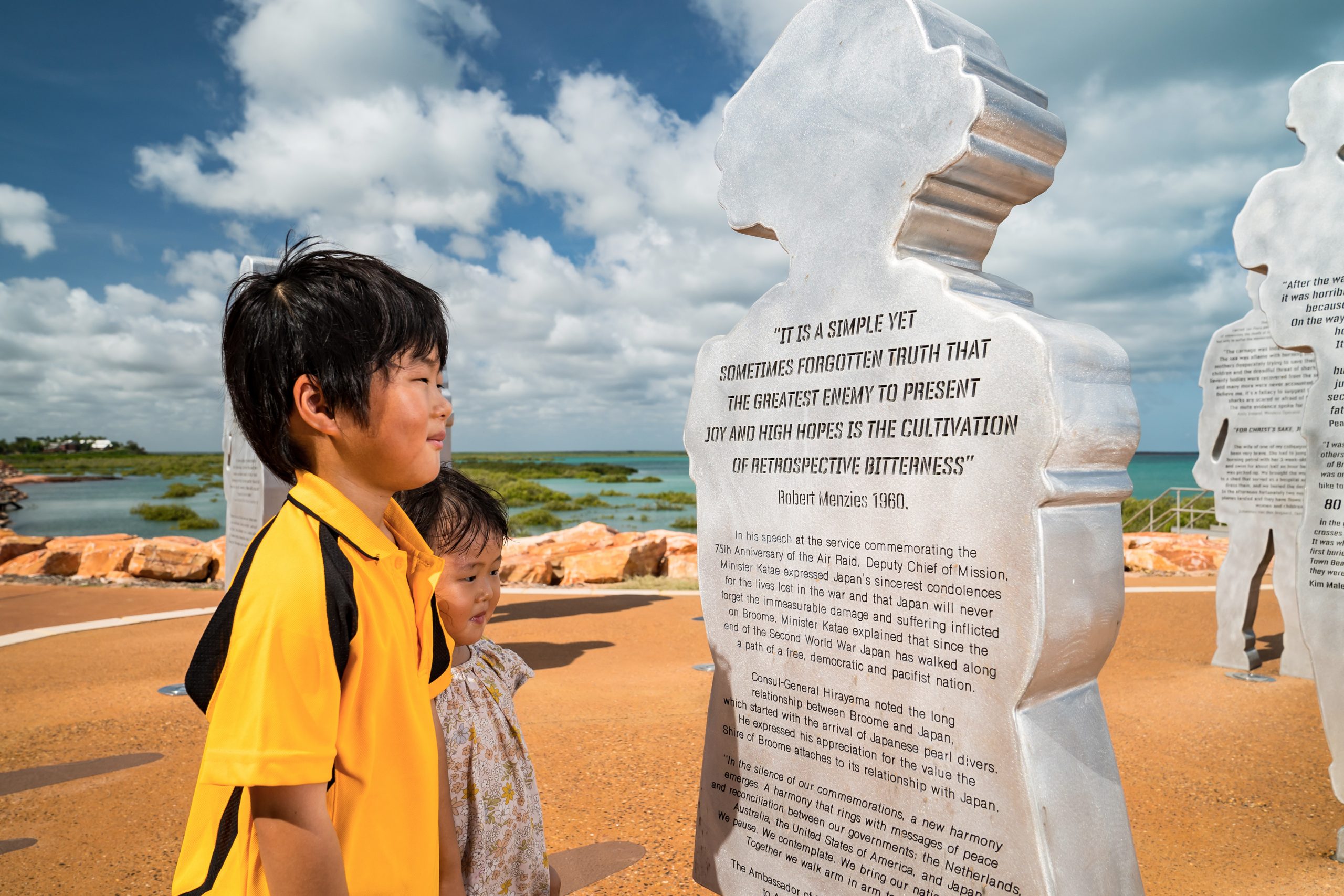 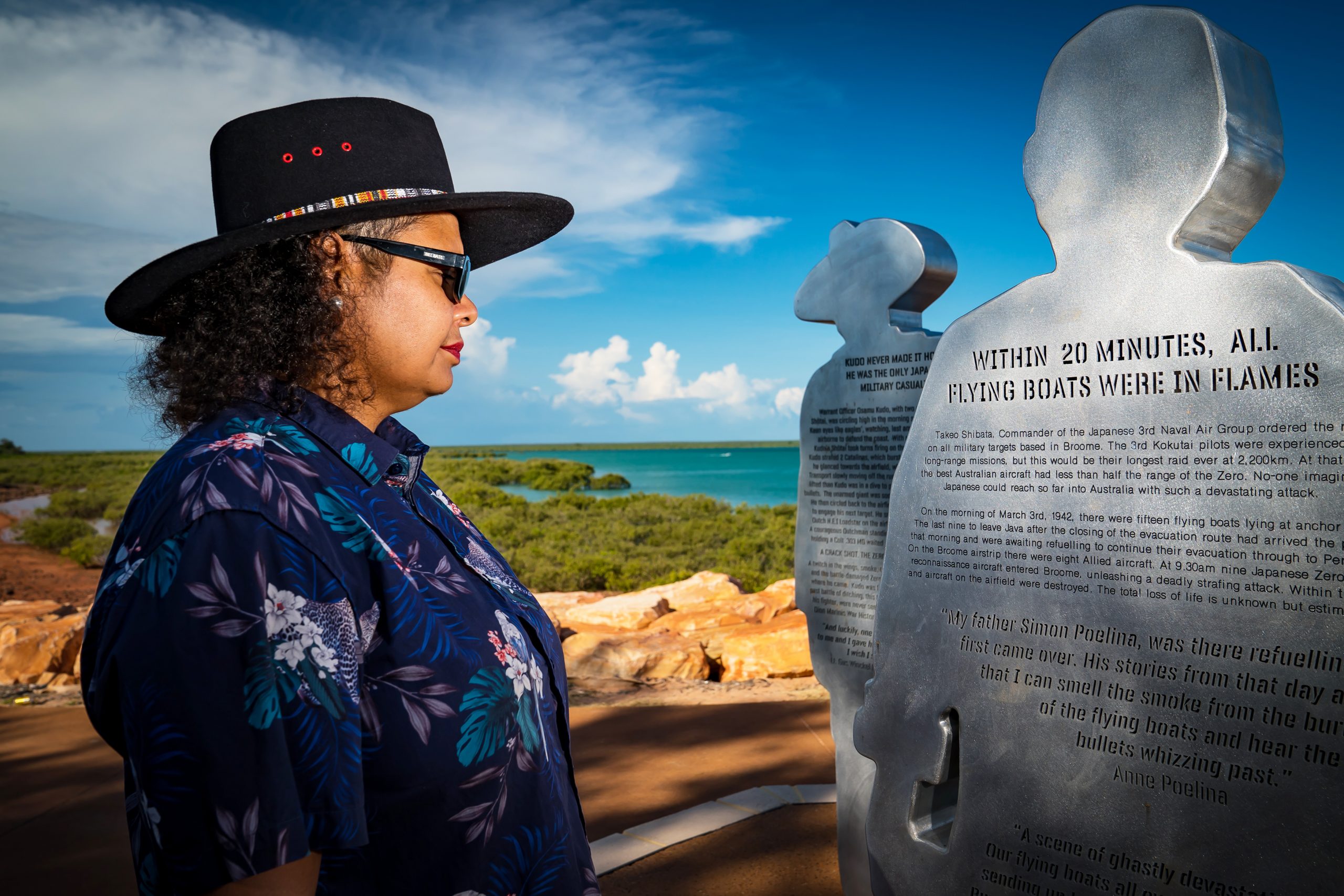 Nine Zeros, Nine Stories is a collaboration between two Australian artists, Perth based Paula Hart and Broome local Lok Chris Maher. The work aims to reveal and enhance the history and curiosity of the many perspectives of the Japanese attack on Broome, Western Australia on 3 March 1942. It stands as a silent legacy to those who lost their lives, and the impact on this remote Australian community.

The nine figures stand less than 2km from, and looking out to, the site of one of the fifteen wrecks, a Catalina FV-N. The figures stand among the silhouettes of nine Zeros arranged into three Shotai flying formations depicted coming from the southwest, the flight path they took on March 3, 1942.

In the past, War memorials have tended to hero the leaders or remember the dead. However, this approach often misses the multifaceted human stories behind these episodes. Chris spoke with a broad cross section of the community to learn and appreciate the tangle of human stories behind the event. Incredible stories of bravery, camaraderie and bereavement, with a true sense of the Broome experience.

The stories and quotes are arranged into 9 themes or chapters. The Chaos of War, The Movement of People, The Attack, The Rescue, The Survivors, The Impact, Kudo, The Wrecks, Reflection and Reconciliation. Each figure carries these stories etched into their bodies.

Some memorial artworks take an abstract approach. An image or form that evokes a personal response from the viewer. This approach relies on the audience’s knowledge. By contrast the Broome attack may seem insignificant in the telling of the atrocities of WW2 and many of the audience will not have this prior understanding to tap into. We didn’t want to create an artwork which was interchangeable with any other setting or any other war memorial. The artwork needed to capture the essence of Broome – the intense heat, the remoteness, the multiculturalism, the sharks! – and the way the war that had spread from Europe had reached this far flung corner of the world.

The next issue with abstracted figures, while being “everyman”, is they often become just that. They are read as white men and strip a sense of women & children and ethnicity out of the picture. People of diverse cultures and backgrounds are a crucial part of the story and so when the audience views the work they need to see diversity within the figures. To create authenticity and a liveliness in the silhouettes, Paula looked to the photos and stories of Dutch, Japanese, Indigenous, military, white Australian and American people impacted by the events of that day.

Chris and I came together as a great collaborative team. I had all the technical experience and industry contacts for the making of a significant sculptural artwork, and a long history of creating works involving the representation of diversity and multifaceted stories. Chris had better understanding of the event and all the local community networks that allowed for really meaningful community engagement, accessing family stories and historical facts from indigenous, Japanese and white locals, speaking to the consulates and various historians. As I’m based in Perth it was also essential to have eyes on the ground locally. Our skill sets were balanced and complimentary. Our fabricators, Kanyana Engineering have done an exceptional job capturing the nuanced detail of the silhouettes in this incredibly robust boxed form, to create a work that balances a delightful invitation for audience engagement with the gravitas of the stories within. The work was unveiled on the 80th Anniversary of the Broome Air Raid, with a slight delay due to Cyclone Anika hitting Broome that day.