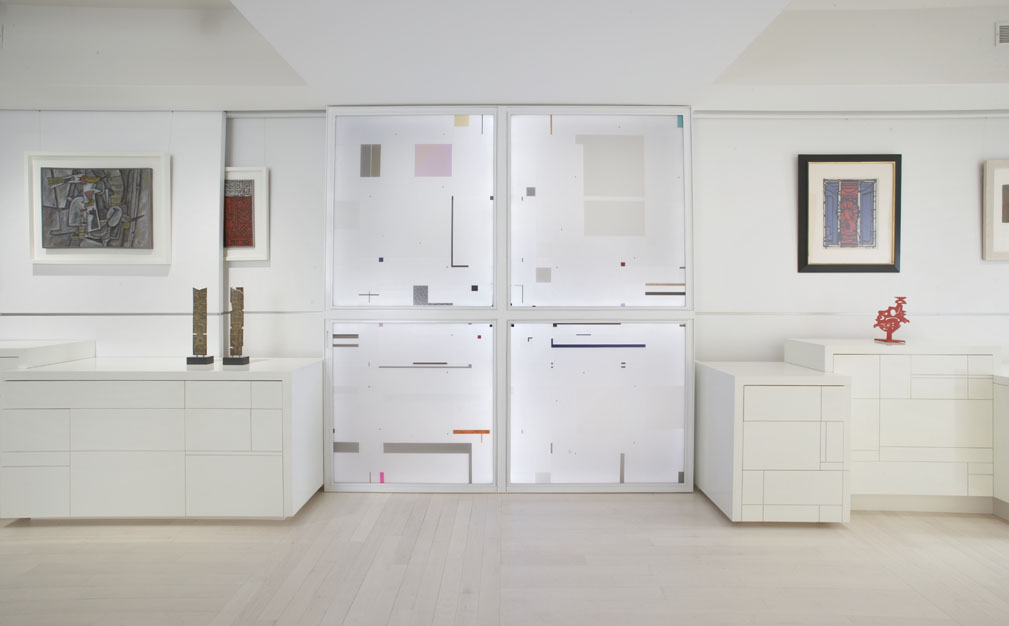 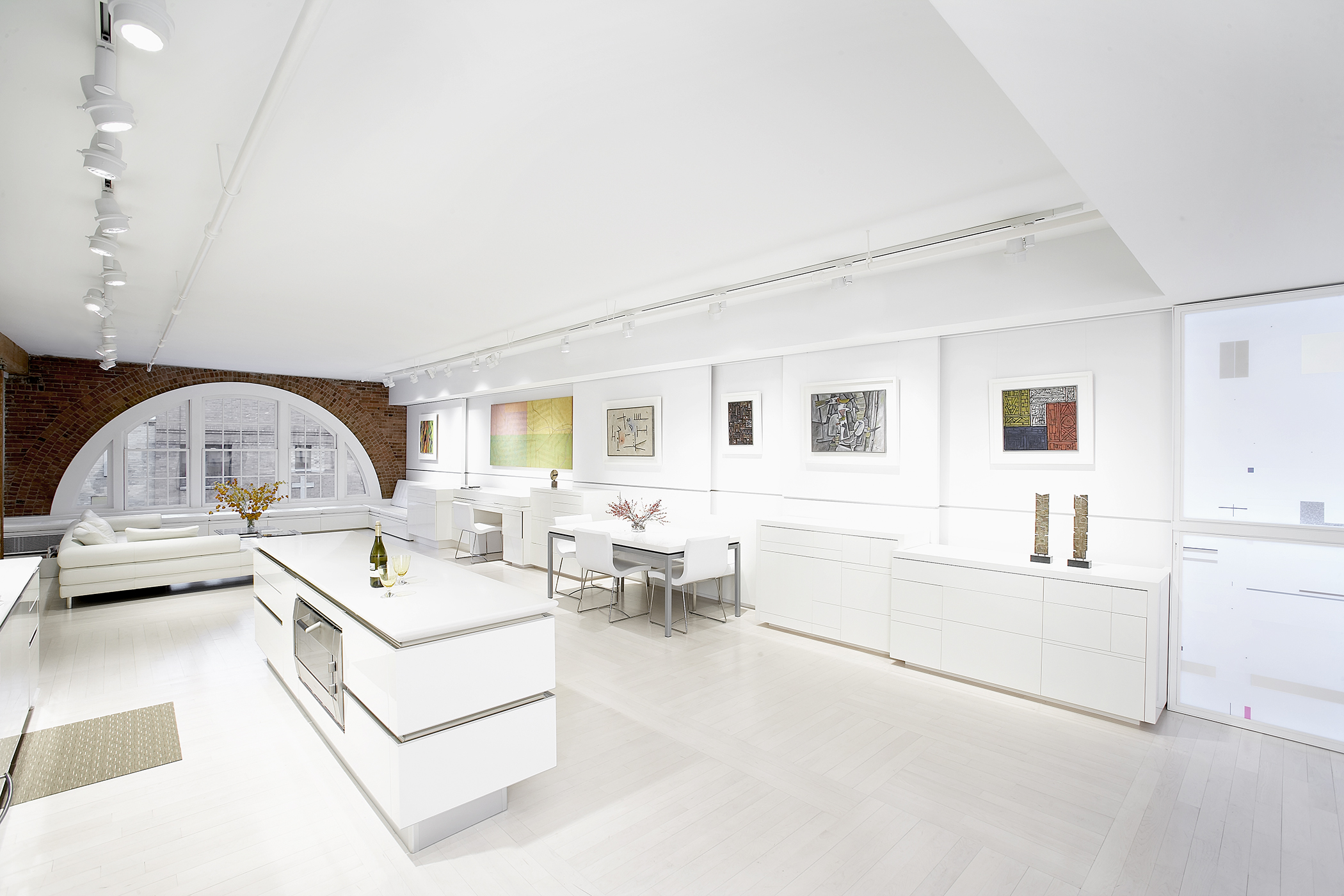 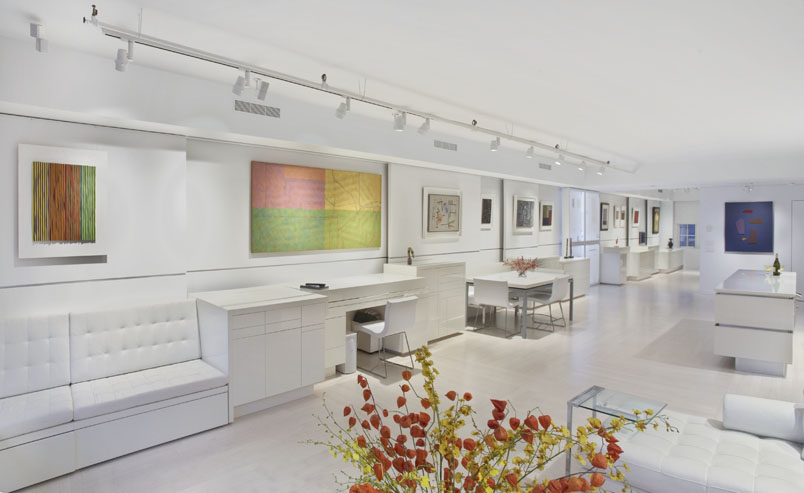 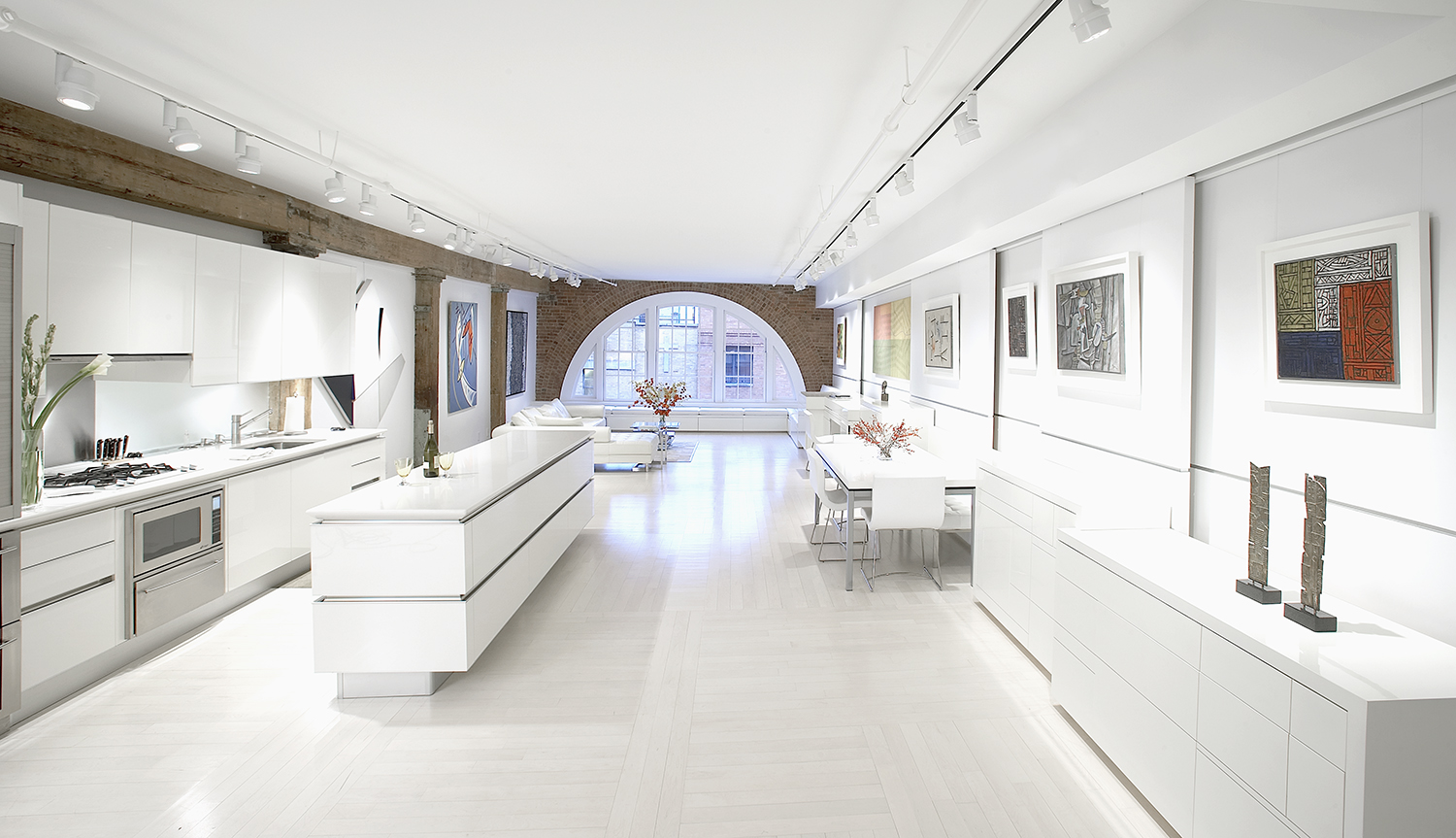 The 1900 square feet loft in SoHo, is home to art collectors who wanted a “white” environment to showcase their collection as an intersection between home and gallery. I-Beam proposed a spatial design approach that would be derived from a site specific art work which would integrate the compositional arrangements of a painting three dimensionally. To achieve this we invited a collaboration with an artist, Joan Waltemath, a contemporary painter whose work is based on a matrix of numerical ratios and the Golden Section that resonate beautifully with the proportions of architectonic space. The clients welcomed this idea.

The goal was to design a space that was dedicated to and in harmony with the client’s collection which included works from the South American "Escuela del Sur" and "Arte Concreto Invencion" which embraced the purist aesthetics of Piet Mondrian and Theo van Doesburg.
The approach was to create a design rooted in and derived from a site specific art that captured the essence of the client’s interests in geometric and minimalist abstractions while creating a flexible matrix that was multifunctional. Joan Waltemath’s work was the perfect marriage between their desires and I-Beam’s design approach and her grid based compositions became a means by which to achieve our shared vision.
I-Beam worked with Joan to locate her proportional matrix in the space, establishing a focal point of origin visible from the long entry/gallery and at the junction that could at any given point separate or connect the public and private spaces of the loft. She created a unique work of art that is at once a painting, a sculpture, a hearth, a door and a light fixture which she refers to as “the cold hearth”.

Ms. Waltemath’s computer program, developed with Andrew Tripp, provided her harmonic structures to be projected across interior volumes.
By exploding Joan’s matrix throughout the space and using its lines to generate various programmatic interventions, it provided a dialogue between art and architecture. Her harmonic progressions radiate out from the center of the piece to generate a variety of spaces including a guest bedroom, a home entertainment center, an office, an open dining area and a temporary guest bedroom which appears by opening a sofa bed that in turn releases a cantilevered wall which swings out to privatize a sleeping area.
Linnaea Tillett was the lighting consultant who collaborated to create an integrated lighting approach that incorporated a combination of phosphorescence and L.E.D technology. The use of phosphorescent paint on Joan’s piece, is revealed as the rotating panel closes off the private section of the loft illuminating an entirely different composition.
"This cold hearth consists of 8 distinct panels (4 quadrants on each side) "made of clear and colored acrylic panels with L.E.D. lights hidden behind a white powder-coated aluminum frame. Phosphorescent acrylic sheets allow the work to reflect day and nighttime conditions and glow cerulean blue in dim light".

The only permanent enclosure in the loft contains closets and a Guest Bathroom made of acid etched mirror, which gives the impression of expanding space and suspended gravity. The apartment is nearly void of doors except for Waltemath's hearth piece which when pulled away from the wall perpendicularly, it separates the private from the public parts of the loft. As architects we welcome the participation of the clients and the collaboration of artists in our designs. This inclusive approach leads to dynamic and playful environments that address multiple needs simultaneously and efficiently while making spaces come "alive" in unexpected ways.