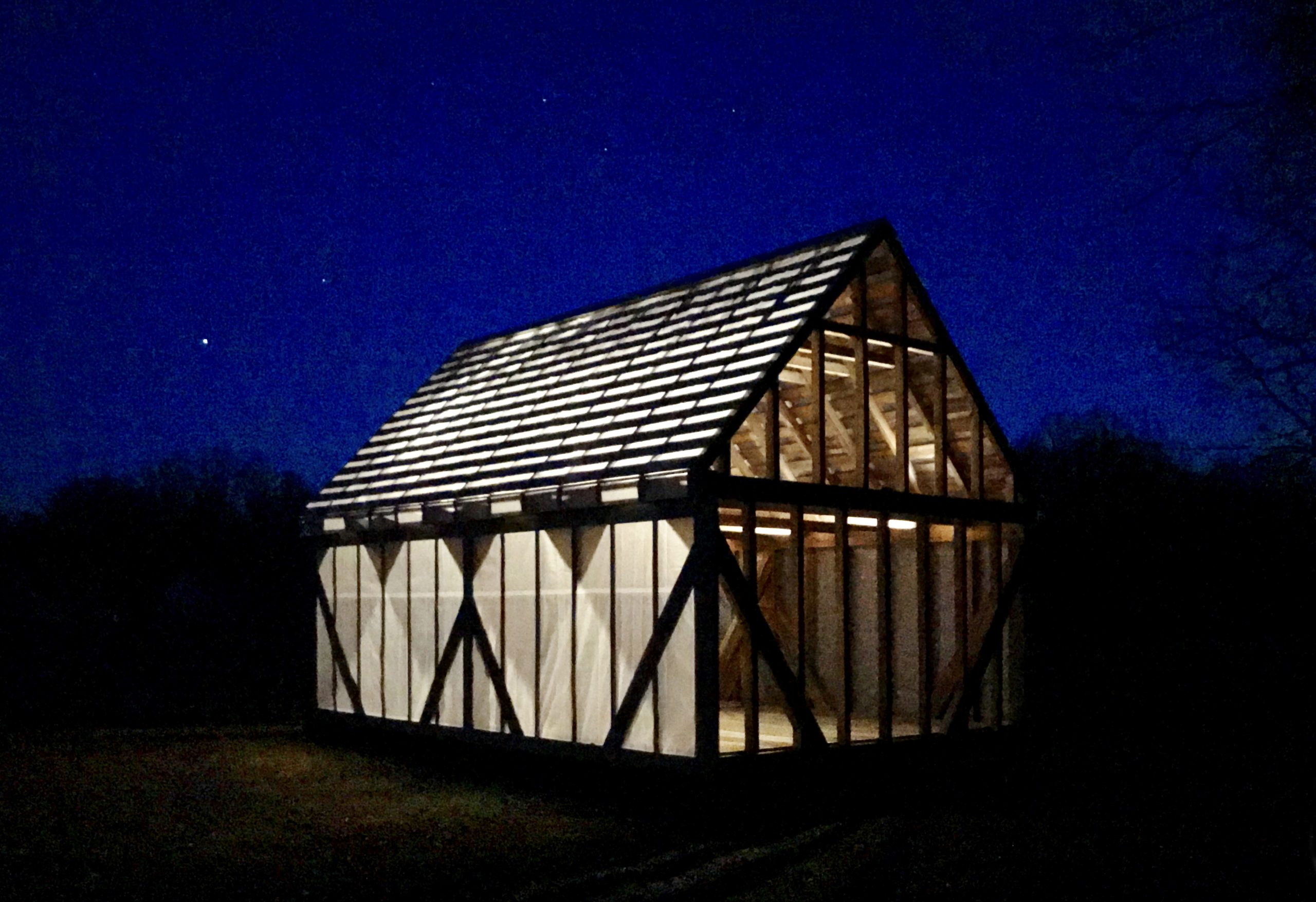 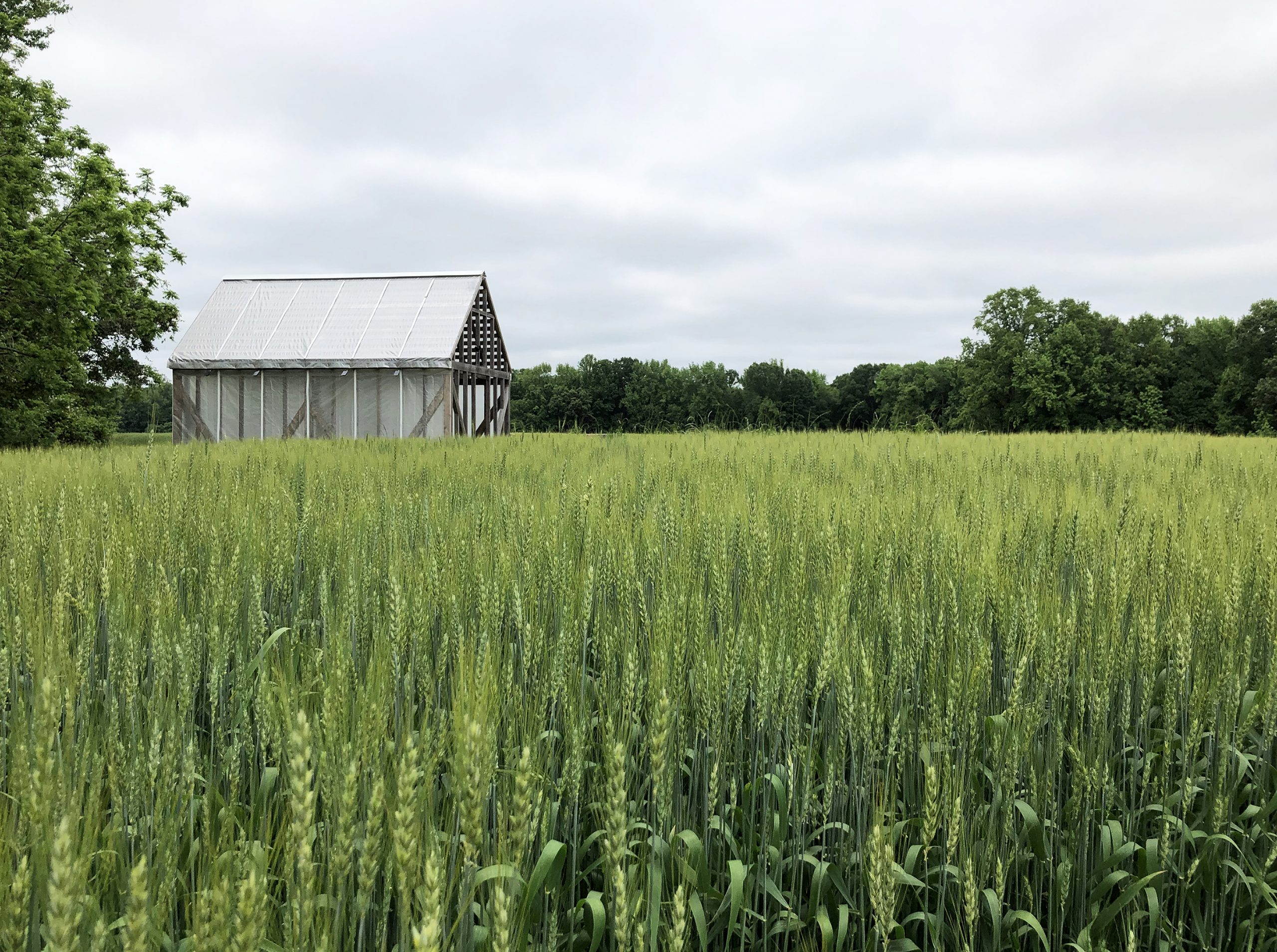 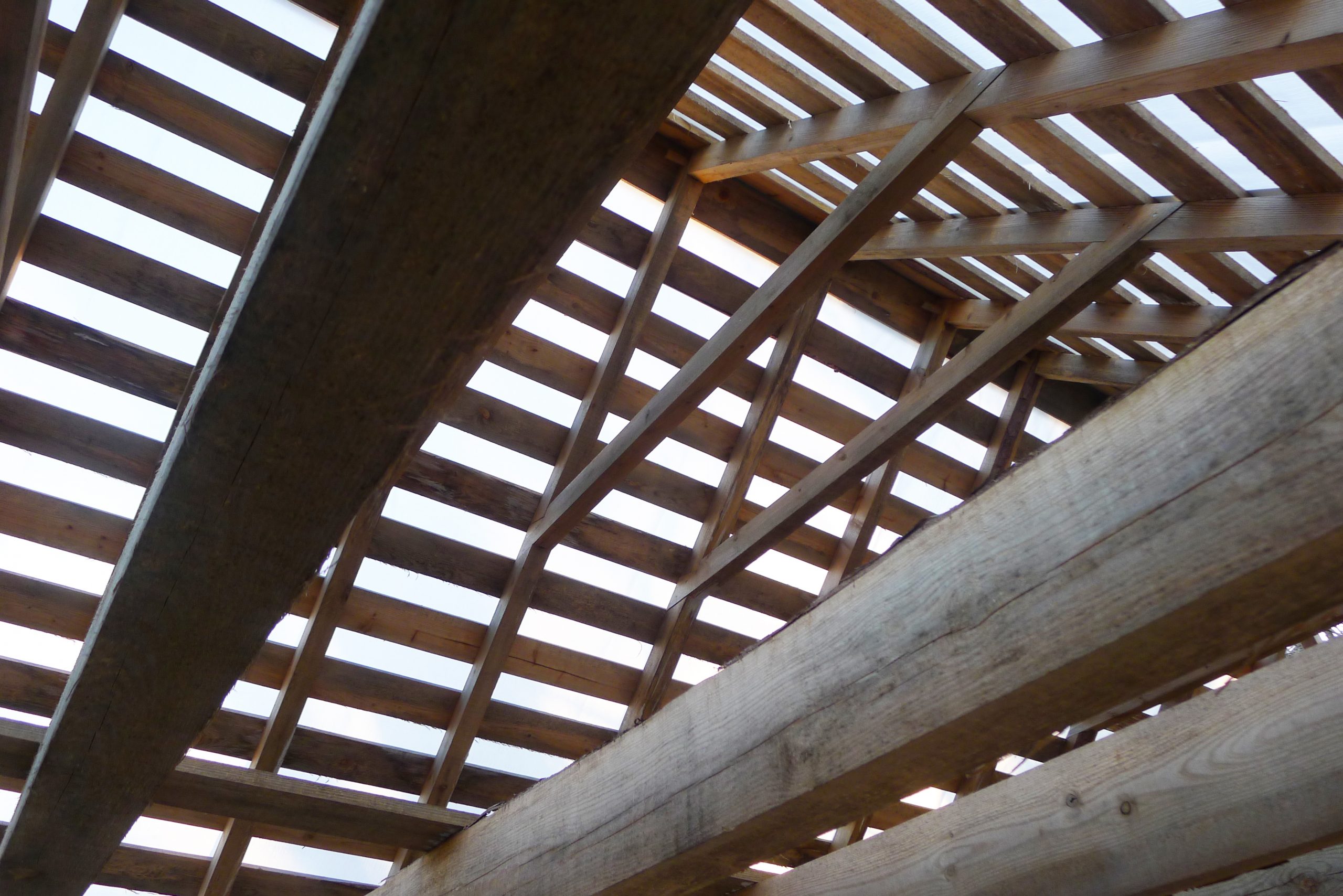 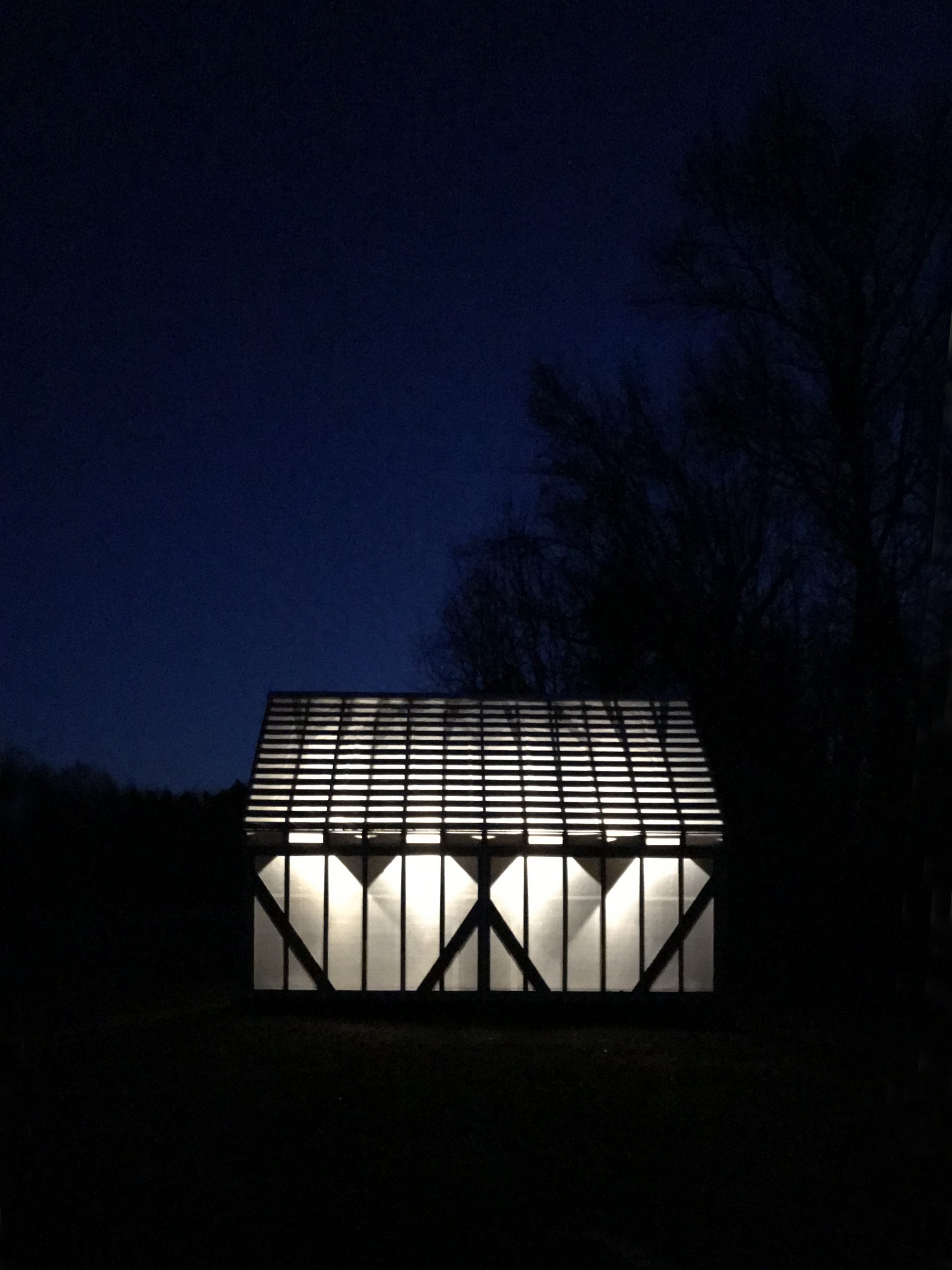 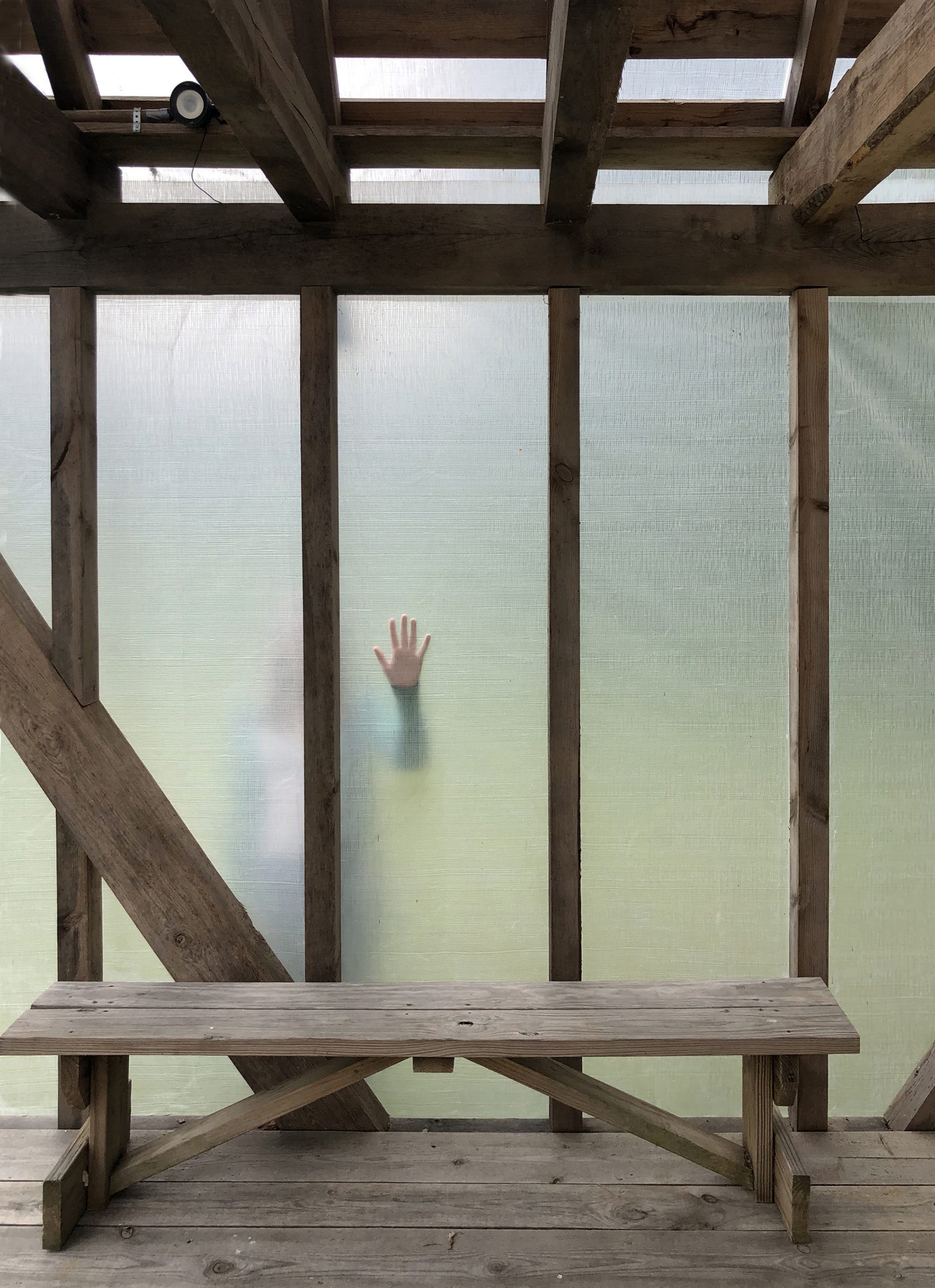 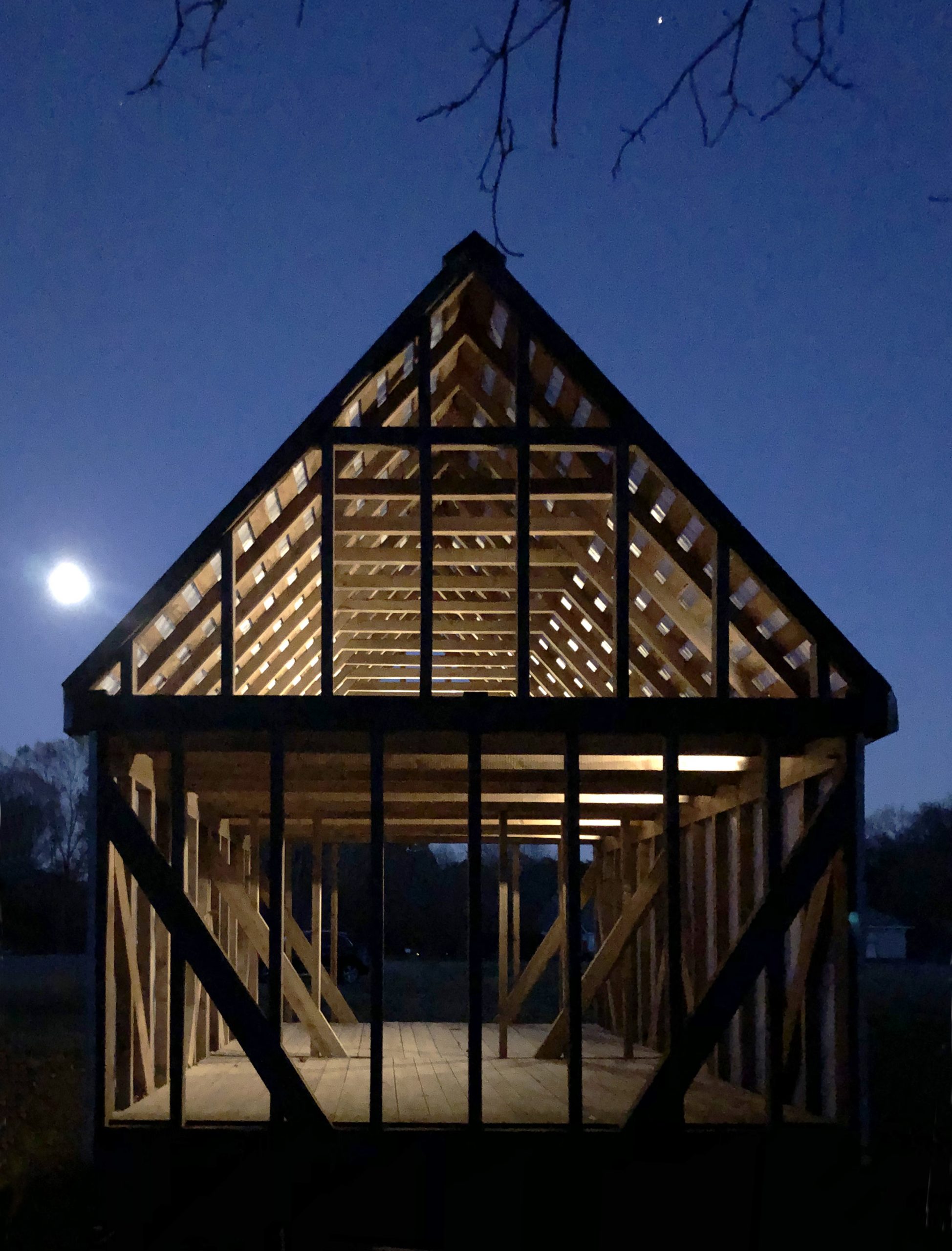 The Remembrance Structure is a pavilion on the grounds of the Menokin Foundation in the Tidewater region of Virginia. Menokin is a former tobacco plantation and the site of the 18th century house of Francis Lightfoot Lee, one of Virginia’s signers of the Declaration of Independence. The rural 500 acre site is located in the Northern Neck region of Virginia, close to the Chesapeake Bay, in an area of early colonial settlement.
This pavilion was erected above the archaeological footprint of an 18th-century field slave dwelling. The structure does not have permanent foundations, to allow future research and not to disturb the site. Its wood framing demonstrates the timber-building techniques used at the time the dwelling was constructed, and the structure is wrapped in a translucent agricultural fabric. With the aid of solar lighting, the pavilion glows at night in memorial of the enslaved residents of the former plantation. The pavilion serves as a platform to encourage open conversations about the role that slavery played in early colonial plantations and our nation’s past, as well as its legacy in our communities today.
The structure was constructed on site using local materials during a five-day timber building workshop by a team of craftsmen, students, and volunteers.

The foundation was in need of an exterior classroom space to accommodate the increased number of school groups, wanted to create a memorial, and have a physical representation of an 18th century slave dwelling that once existed on the plantation site. In early discussions the client did not see the potential for one structure to serve their multiple needs. Research on historic timber framing methods and 18th century vernacular structures was required to develop the appropriate scale and details for the proposed structure. Design work and drawings were required to build the pavilion and an architect was needed to lead the design and planning process, research historical structures, select the project materials, and organize the construction workshop to build the structure.

The client and the architect were in agreement that the timber frame details should be visible to illustrate methods of construction. The pavilion should be sustainable, contemporary in appearance, and visually striking.
The architect did surveys and research were done to locate and document standing examples of regional 18th and 18th century vernacular structures so the new pavilion would be scaled and detailed appropriately to the typology and age. Contemporary translucent building fabric was used to clad the sides and roof of the frame to provide shade and shelter inside the outdoor pavilion. Sustainability was addressed in the use of locally harvested white oak and short leaf pine for the frame members, hand tools were used instead of power tools for most of the frame construction, and solar powered LED fixtures provide the evening lighting effects. The translucent building fabric on the roof and north and south elevations provides shade and diffused light, while the open gable ends take advantage of prevailing summer winds and provide passive ventilation to help cool the space inside.

The reductive approach to the pavilion helped solve many potential design problems. The tight budget kept the project focused the essential design and programmatic goals. The rural and remote site reinforced and necessitated a sustainable approach to material sourcing, construction, and energy use. The abstract representation of the dwelling in the pavilion allowed more room for visitor interpretation and interaction with it. The simple form and materials of the pavilion allowed for a better integration of the building in its rural site context. The Remembrance Structure has also helped draw attention to the foundation’s efforts to research and identify the names and identities of the enslaved that the lived and toiled at the plantation and the pavilion’s function as a memorial gives representation those former site occupants. The foundation hopes that pavilion can serve as a catalyst to engage in conversations on race and the role that slavery played in early colonial plantations, the region, and our nation’s past. The small pavilion is becoming a focal point on the historic site for contemporary installations and changing exhibits that focus on connecting the past to our present situation on important topics and problems rooted in our nation’s history.