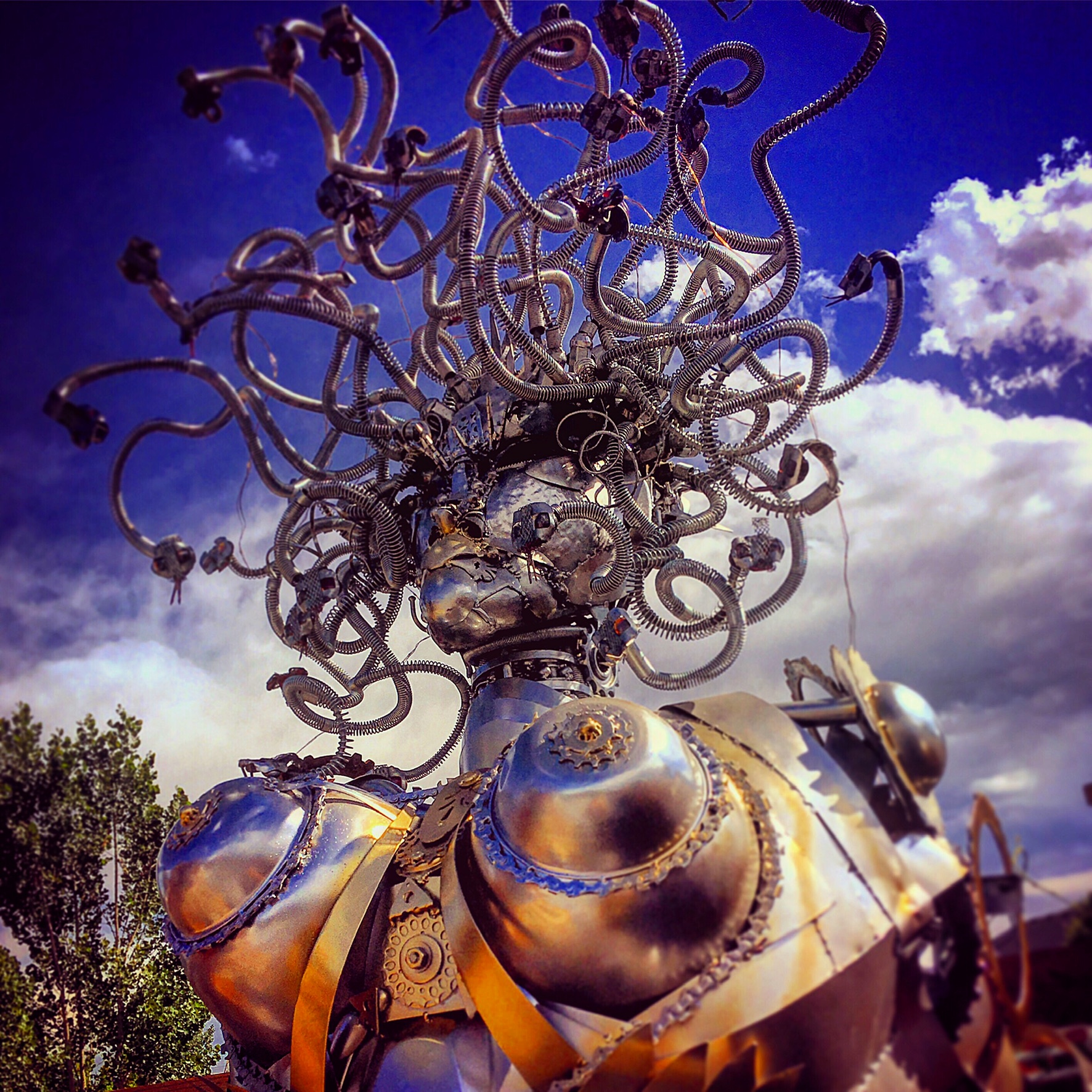 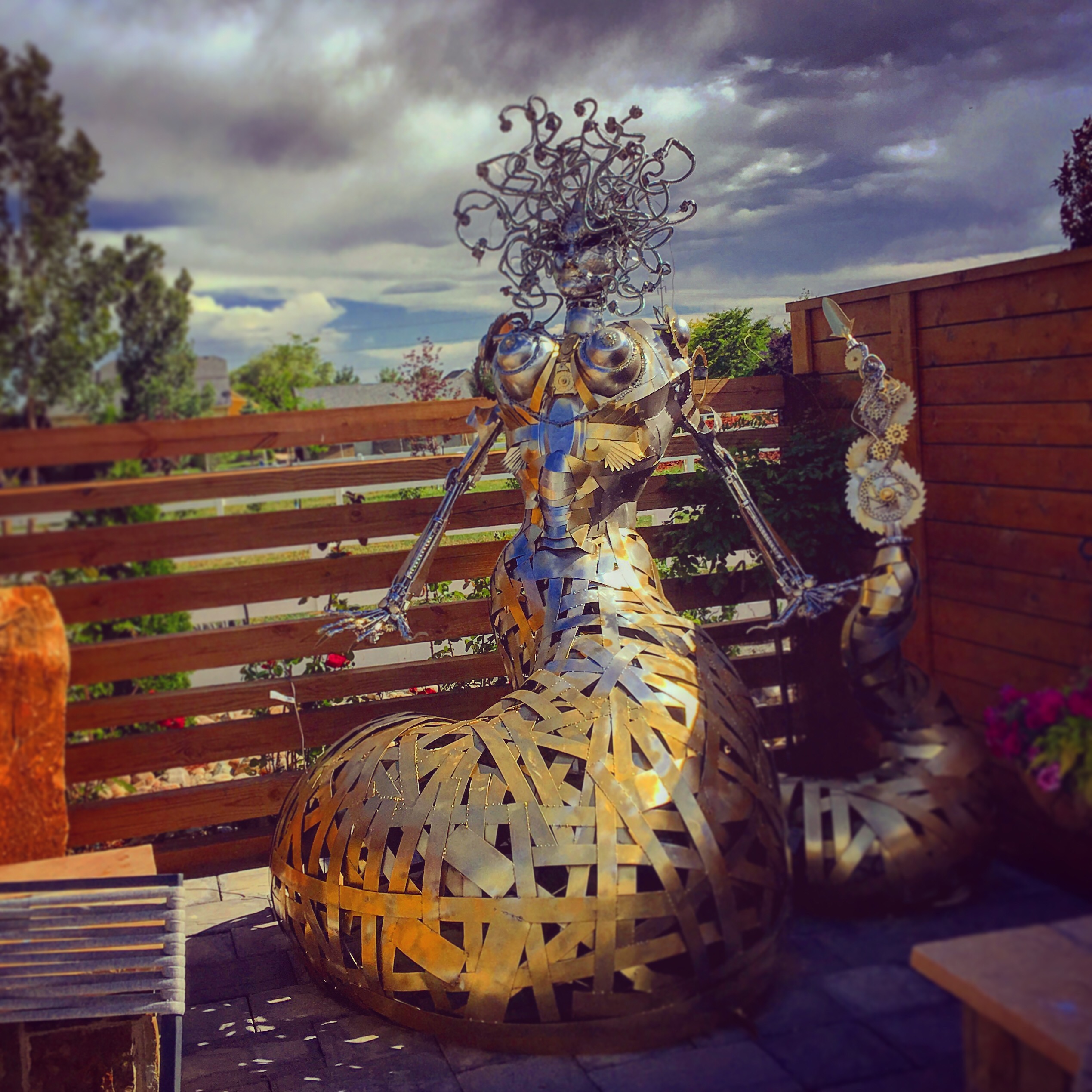 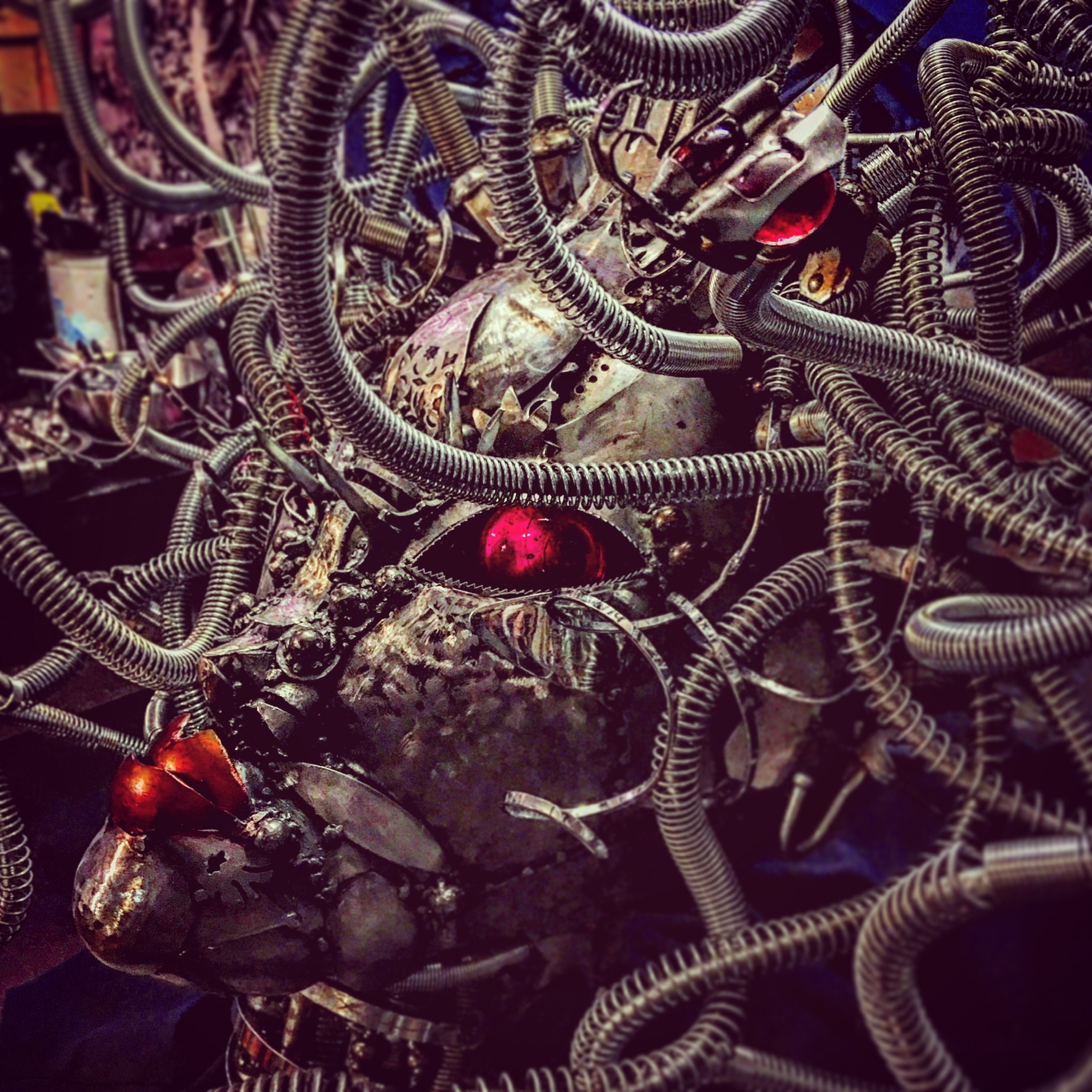 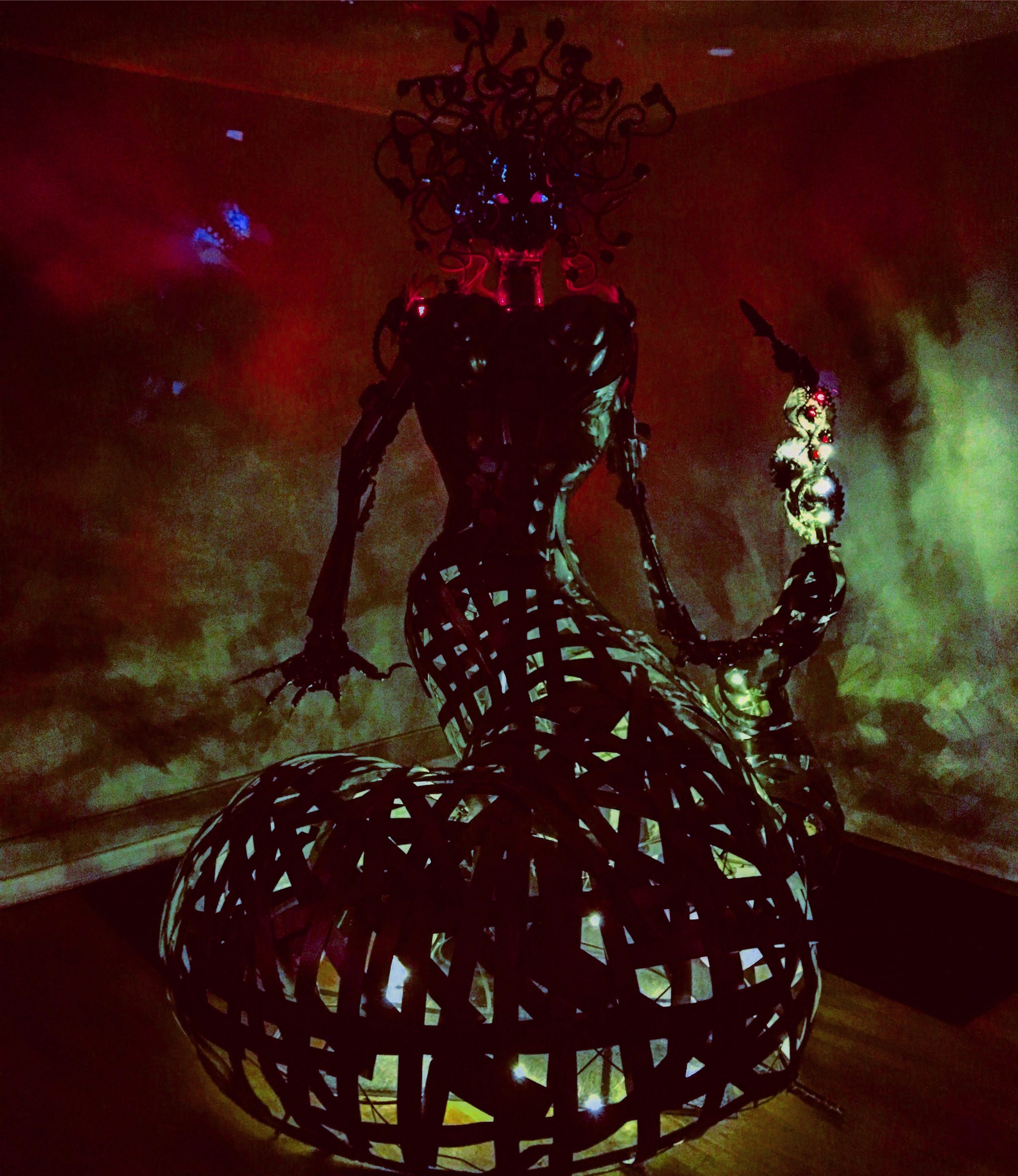 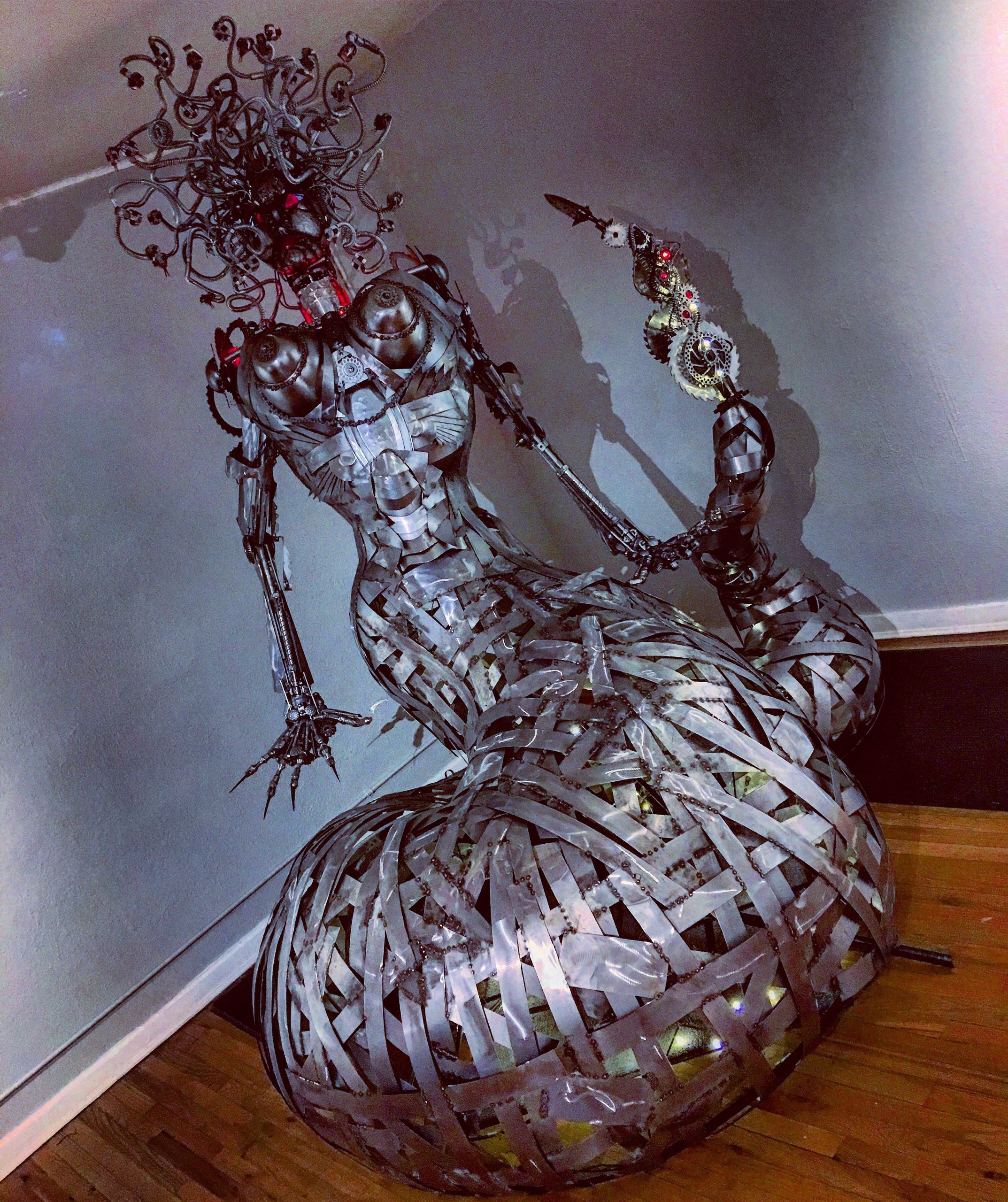 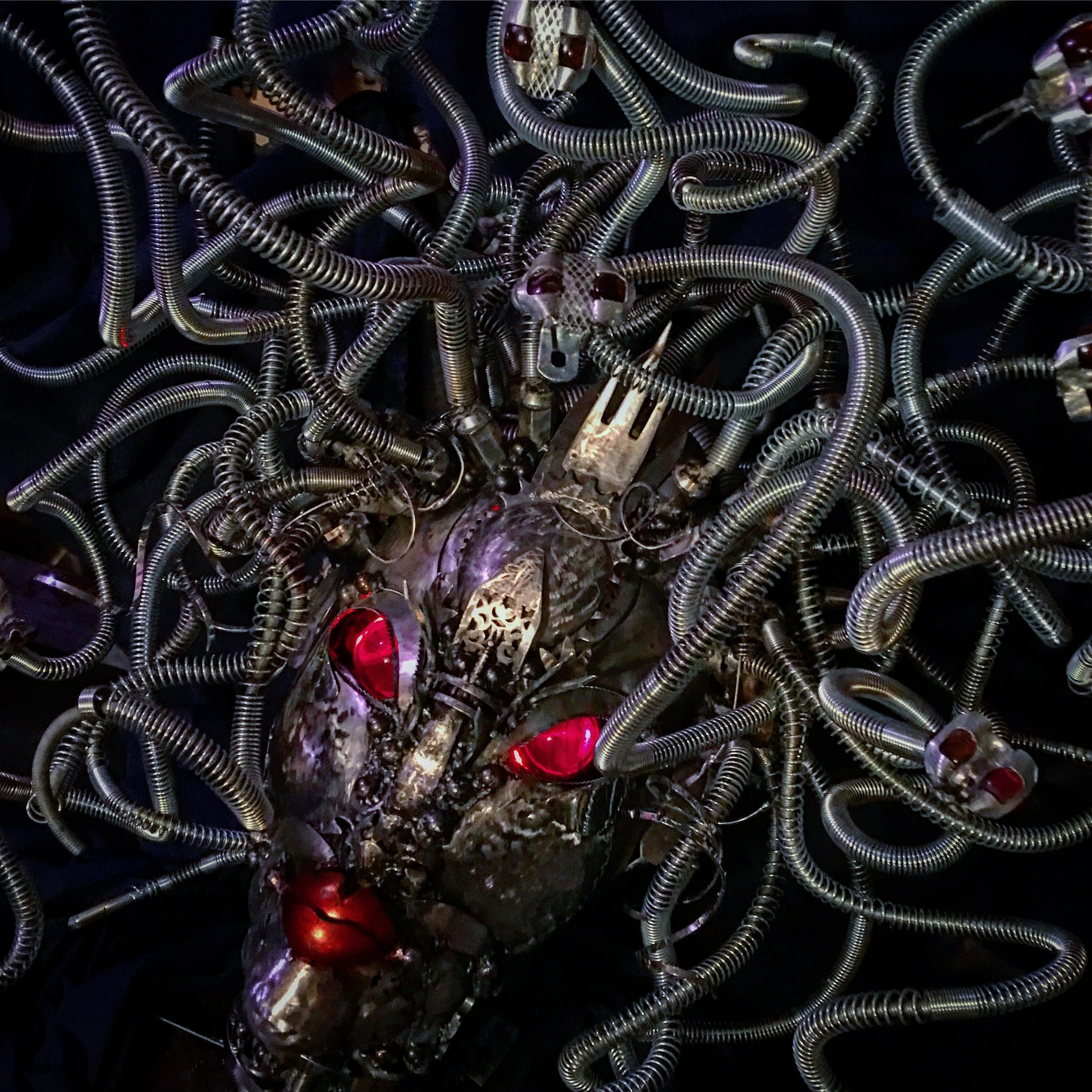 Medusa was a private commission from a couple whom have an enormous love for Greek mythology. She stands 11’ tall, a composite of welded steel, both reclaimed and fabricated, with 2” red marble eyes, along with 36 individual steel snakes, (for hair), each with a pair of 3/4” red marble eyes.

Medusa ended up being 11’ tall. Her eye size projected her enormity. I wanted her image to look boldly feminine and serpentine in design, fierce in pose and gaze, curving and undulating in movement. Venomous snakes, such as the viper, were base animal references. Saw blades and chainsaw blades were equal parts ornament and armor. The feminine/serpent was intended not just to merge beauty and strength, but to convey an anthropomorphic grace and ferocity.

Medusa’s enormity required some great help. My younger brother, Johnny, helped with her build and weld and he remains my constant consultant in every project that I pursue. I grew up drawing comic books, so Medusa began with a series of sketches to determine her style and look with my clients. A $2,000 budget allowed me to upgrade my tools and purchase much reclaimed steel from thrift stores, habitat restore, eBay, flea markets and fabricated parts from Metal Distributors. An award winning marble maker at Kind Creations was responsible for her eyes. My clients were also hugely instrumental, and helpful in the sculpture’s movements and installations.

Medusa’s popularity has flourished from times of ancient Greece. She is arguably the most famous and memorable figure from mythology and her popularity eclipses that of any mythological god or mortal man. Her figure, story and form are timelessly captivating, and probably best realized with in her artistic portrayals. An abject hero, Medusa has been depicted as a monster, a protective symbol, an enemy, a symbol for liberty, a sympathetic victim of rape, and a curse. I have always love Greek mythology so this project was an absolute dream.