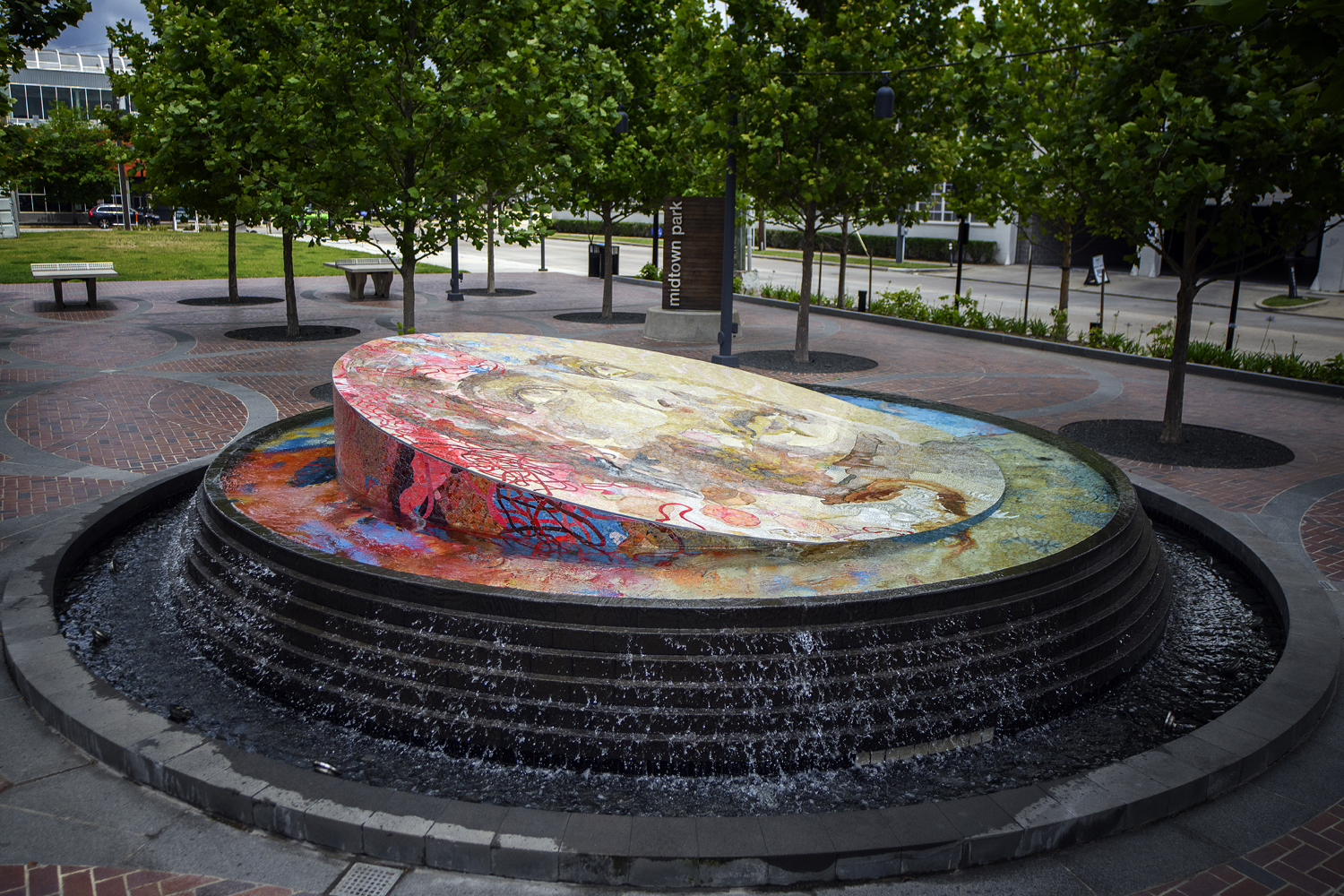 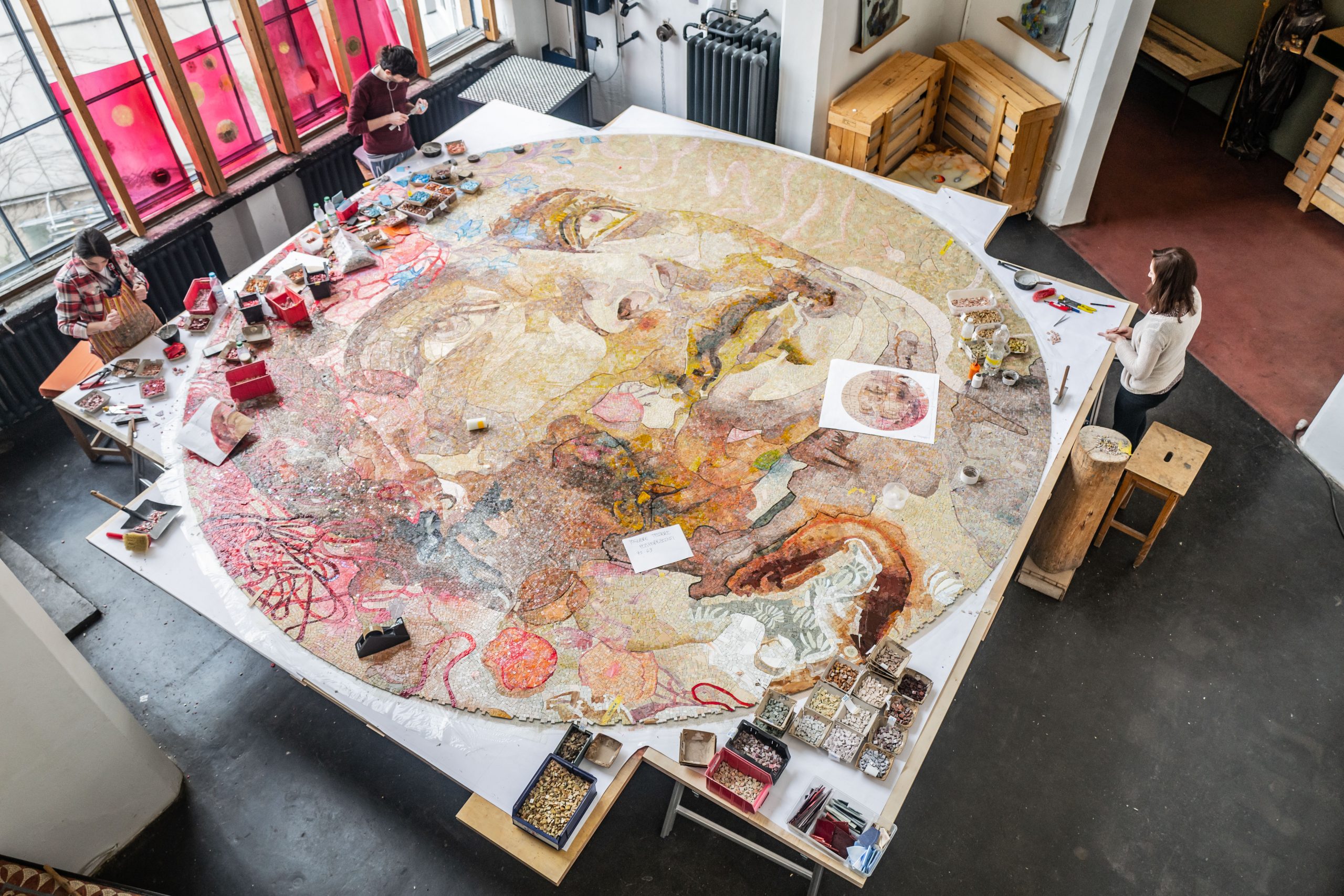 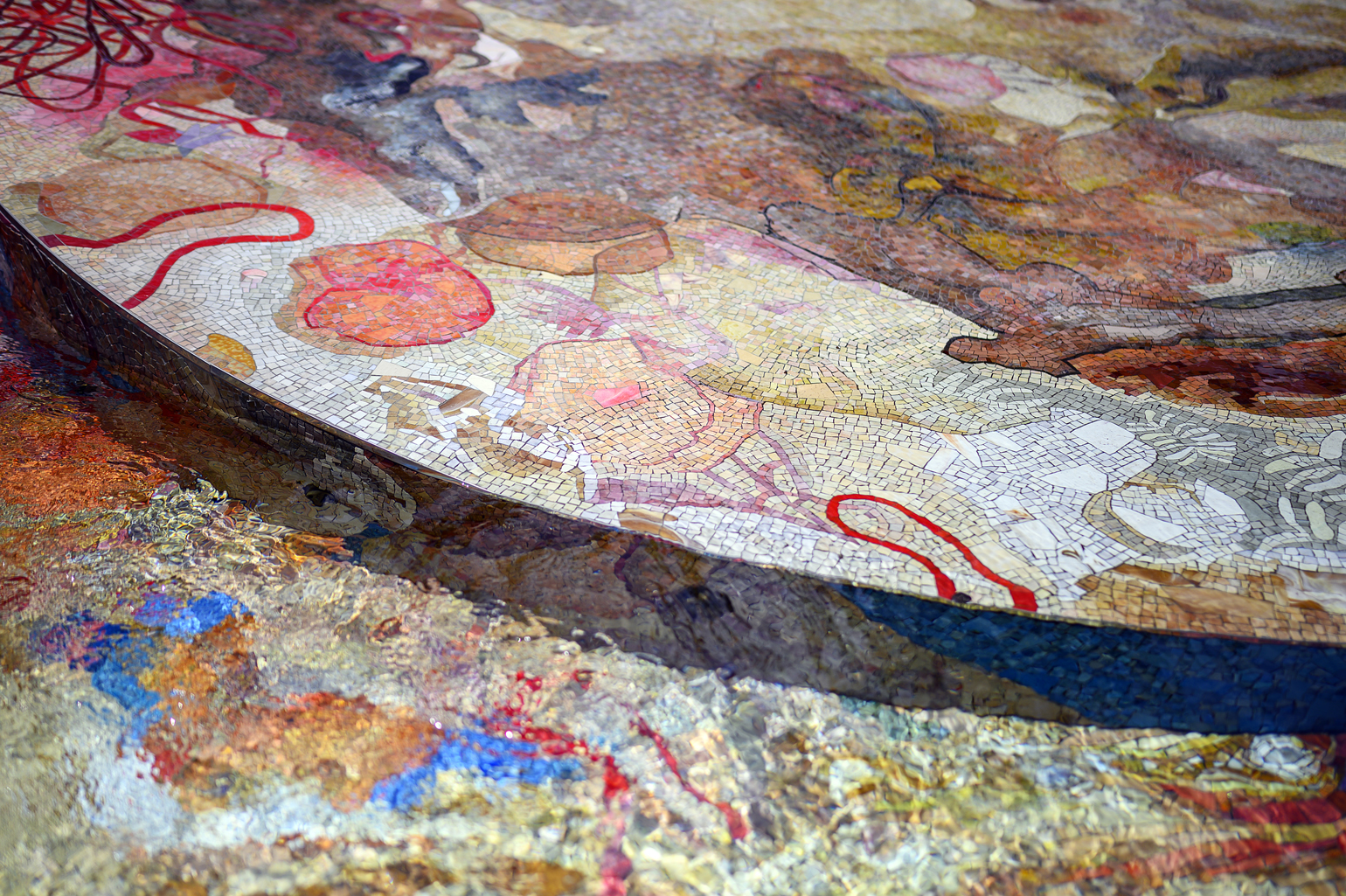 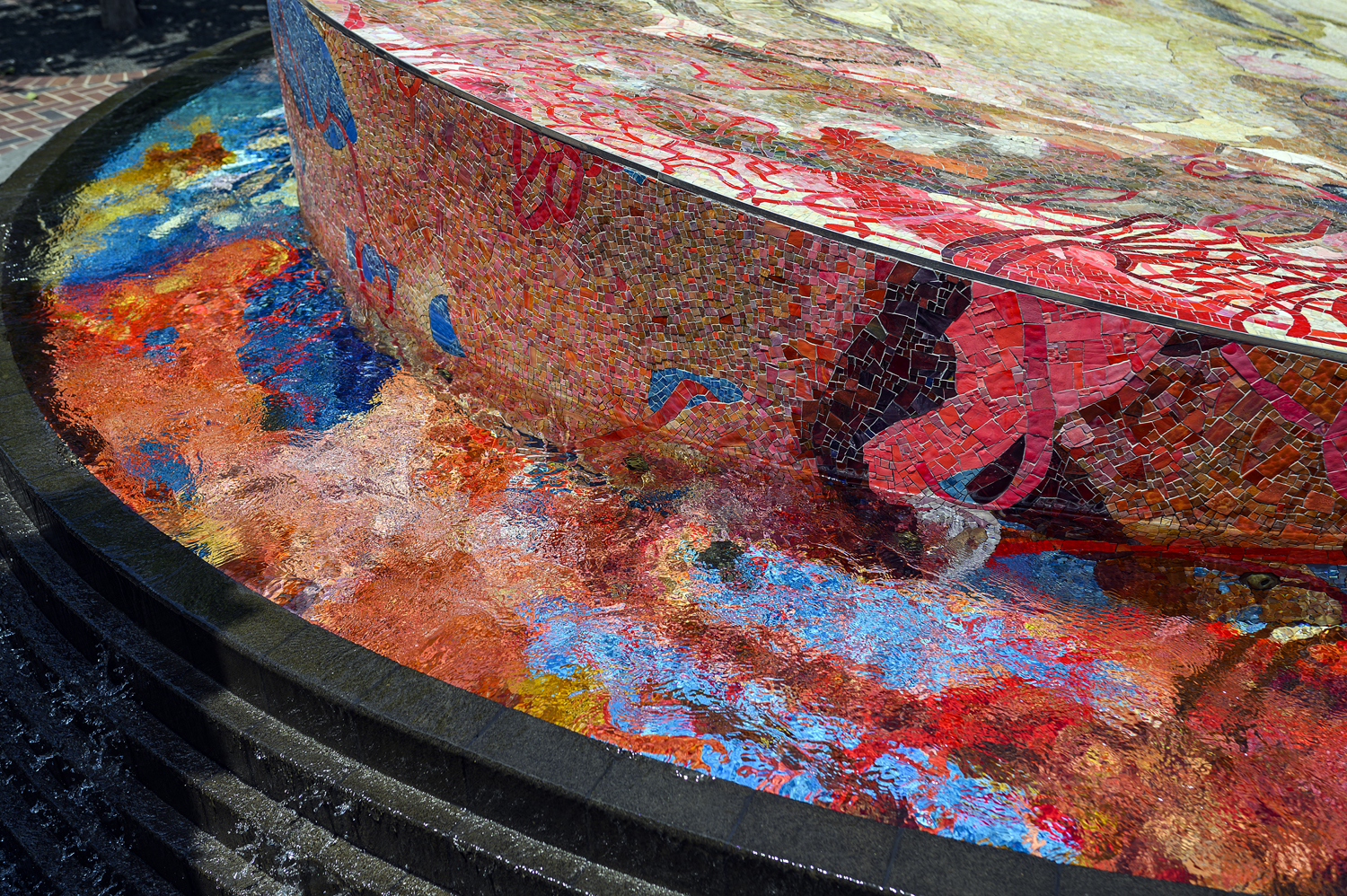 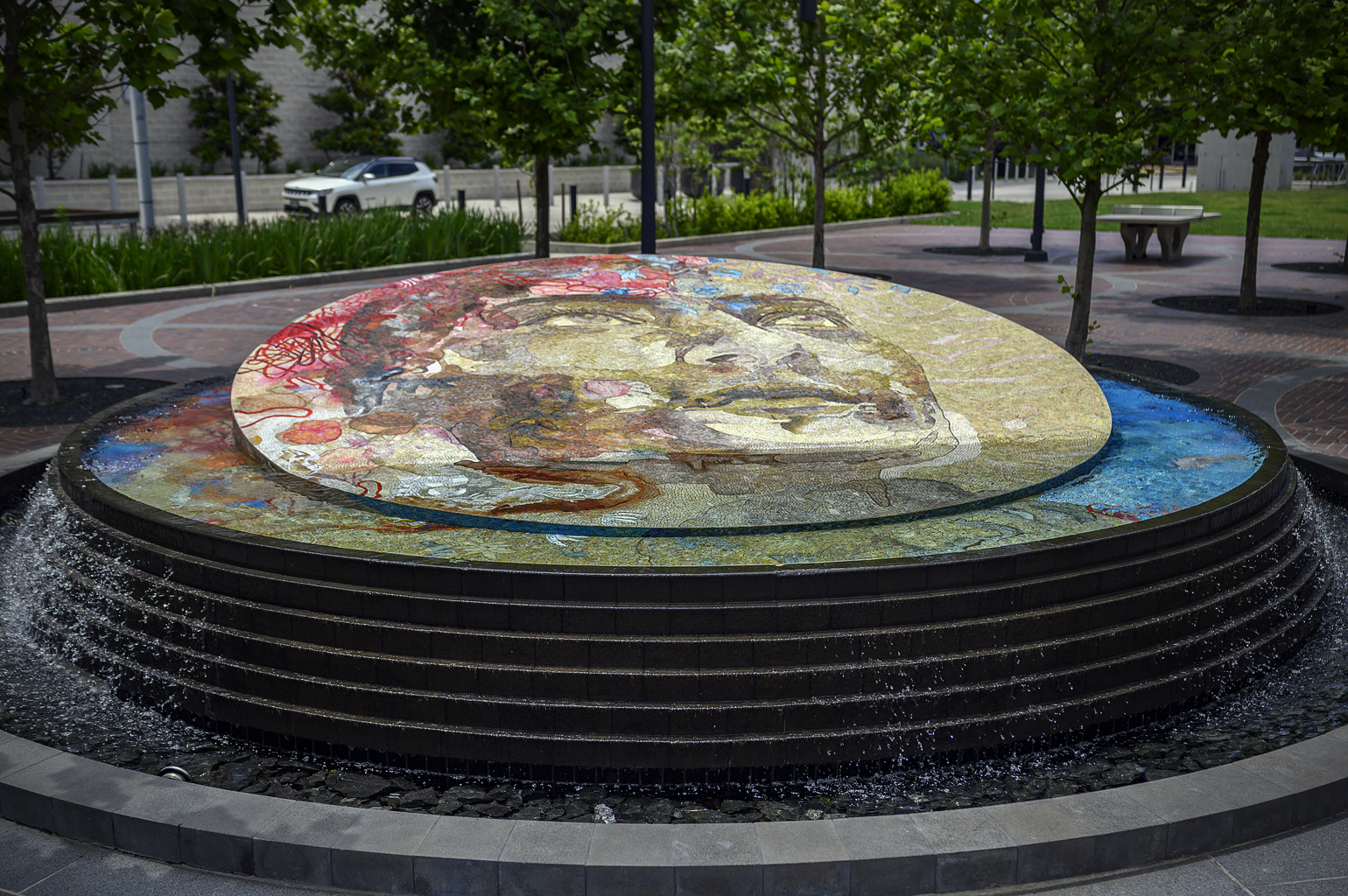 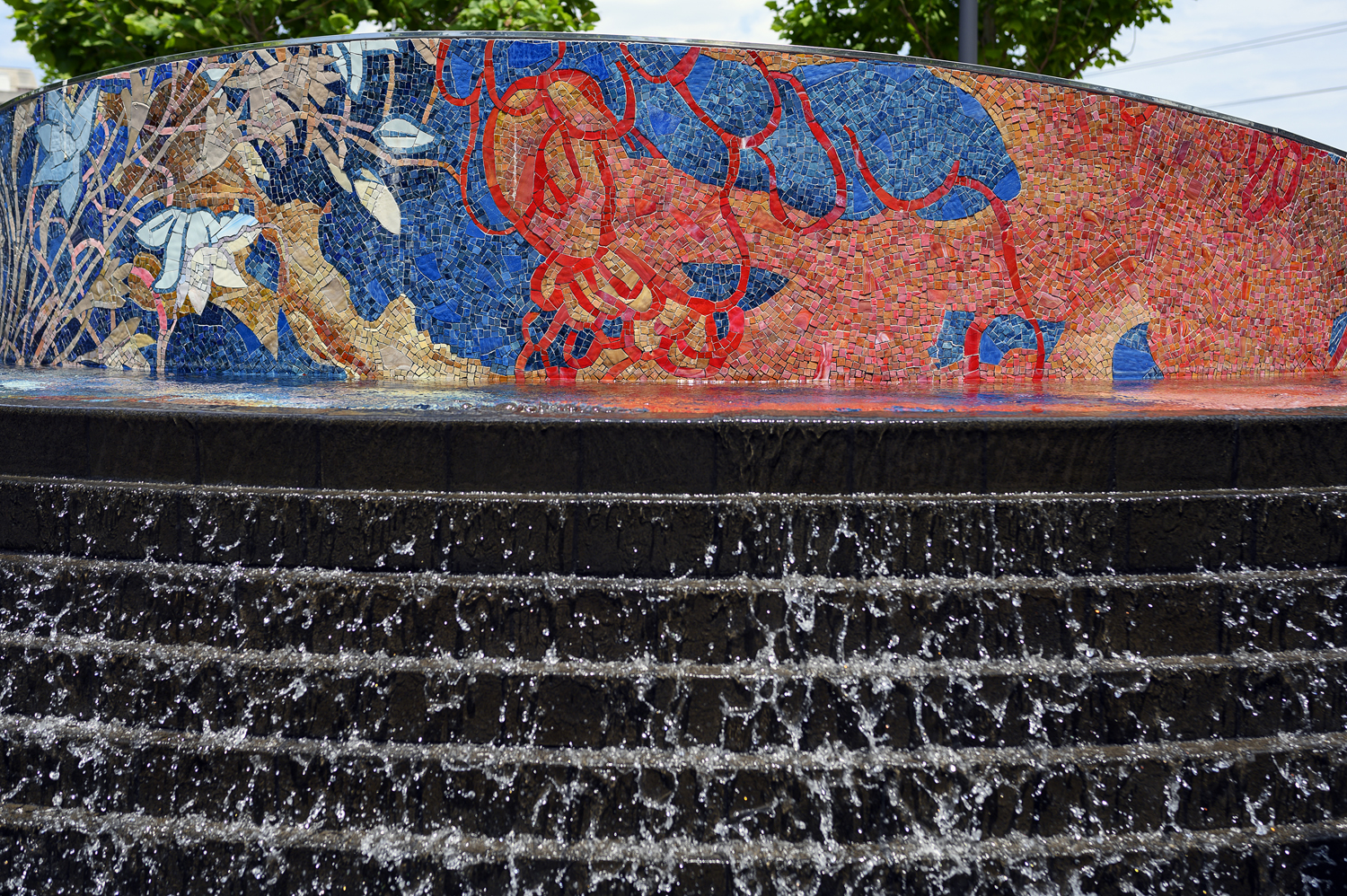 Mary-Am, a complex mosaic portrait by the artist Shahzia Sikander, is a celebration of the subliminal feminine force present in nature and in all cultures and religions. The female face’s emergence from the water and from within the painterly marks and gestures, and the portrait’s upward glance, is symbolic of its soaring, inspiring premise, the human journey of creativity and strife. This iconic public work was designed specifically for Midtown Park in Houston, home to numerous major permanent commissions. Midtown Park celebrates Houston’s authentic art scene and remarkable art community by establishing an arts ecosystem. It offers three acres of new public urban park and open space with complementary pedestrian-oriented streetscapes. The park includes a great lawn, flexible pavilion, bayou and trail, native landscaping, interactive water feature, playground, game courts, market areas and a dog park.

Art has been a deeply personal vehicle to engage paradoxes and polarities, power and history via expunged female accounts and narratives, whether in art-history, culture, religion or the political discourse. Iconographies present in the artist's work have been a direct result to counter narrow definitions of the ‘other’ and provide a broader representation of the female agency when possible. Artists assist in new ways of thinking, reframing history and imagining new possibilities as part of the broader processes of transformation in a society. Often missing in such societal shifts are representations and voices of women, both as victims of expunged narratives and as leading voices, to offer counter perspectives to our prevalent hyper masculinized histories and ways of being.

The artist worked closely with our artisans in Munich to create a mosaic fountain for this new outdoor green space in the heart of Houston.

Shahzia Sikander was born in 1969 in Lahore, Pakistan. She lives and works in New York. Other public Installations and commissions include: "Disruptions as Rapture", Public Installation, Aga Khan Museum, Toronto, Canada, "Ecstasy as Sublime", "Heart as Vector and Quintuplet-Effect", Permanent Campus Commission, Julis Romo Rabinowitz Building and Louis A. Simpson International Building, Princeton University, NJ, "Gopi Contagion", Times Square Arts: Midnight Moment, Times Square, New York. Sikander received a number of awards, including the Shakir Ali Award/Kipling Award from the National College of Arts, Lahore in 1993, The Joan Mitchell Award in 1999, and the MacArthur Fellows Program in 2006. In 2012, Sikander received the inaugural Medal of Art from Hillary Clinton and the US State Department. Pioneer of 'Neo-Miniature, Sikander continues to impart her personal touch and political and social views into what may be considered to be an impersonal and disciplined tradition while opening up the discourse on craft and traditional art forms in nuanced ways. She continues to exhibit work all over the world, exploring tensions between power and powerlessness to engage with the intrinsically beautiful and poignant into culturally relevant and transformative.