Many Bays, Many Days - CODAworx 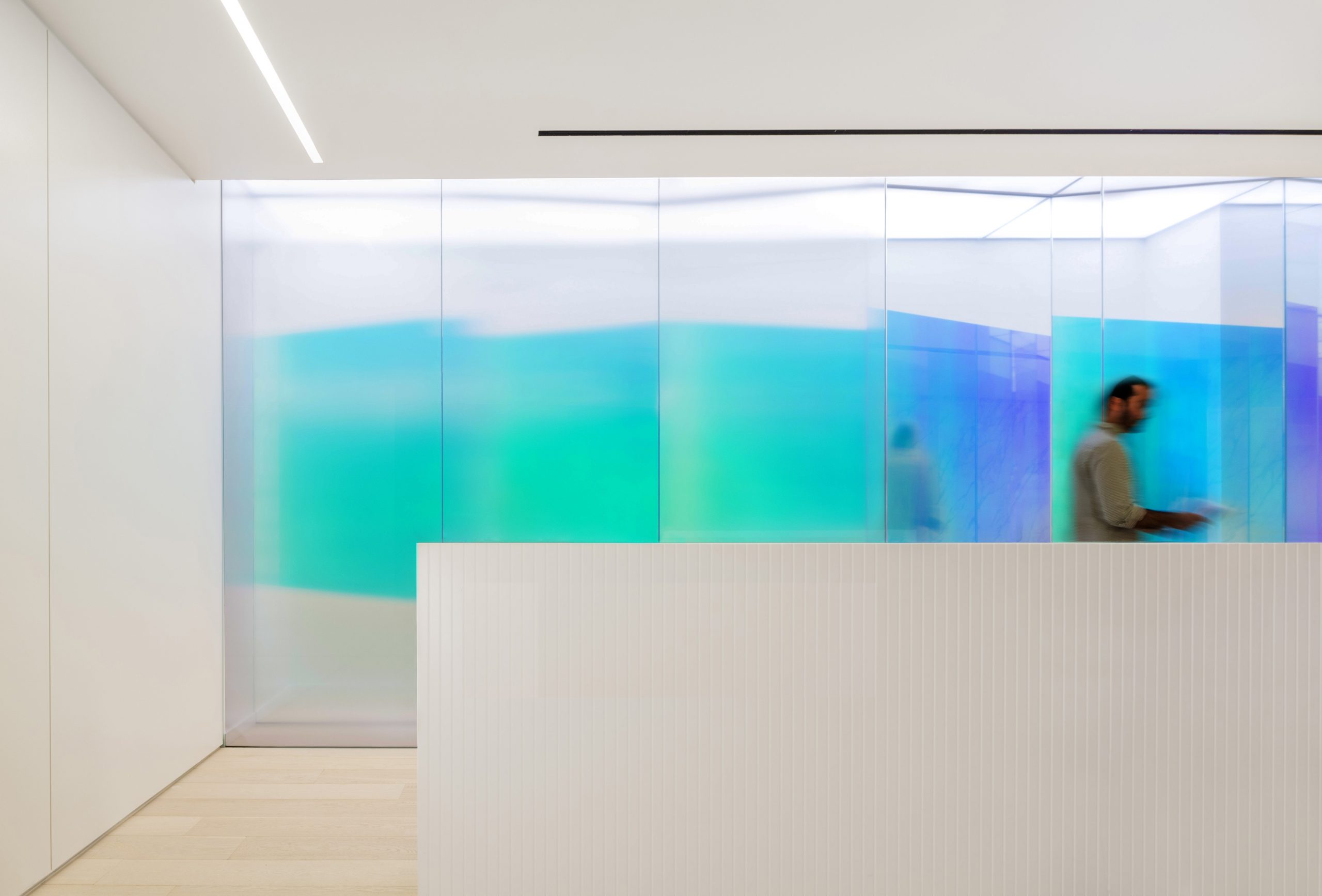 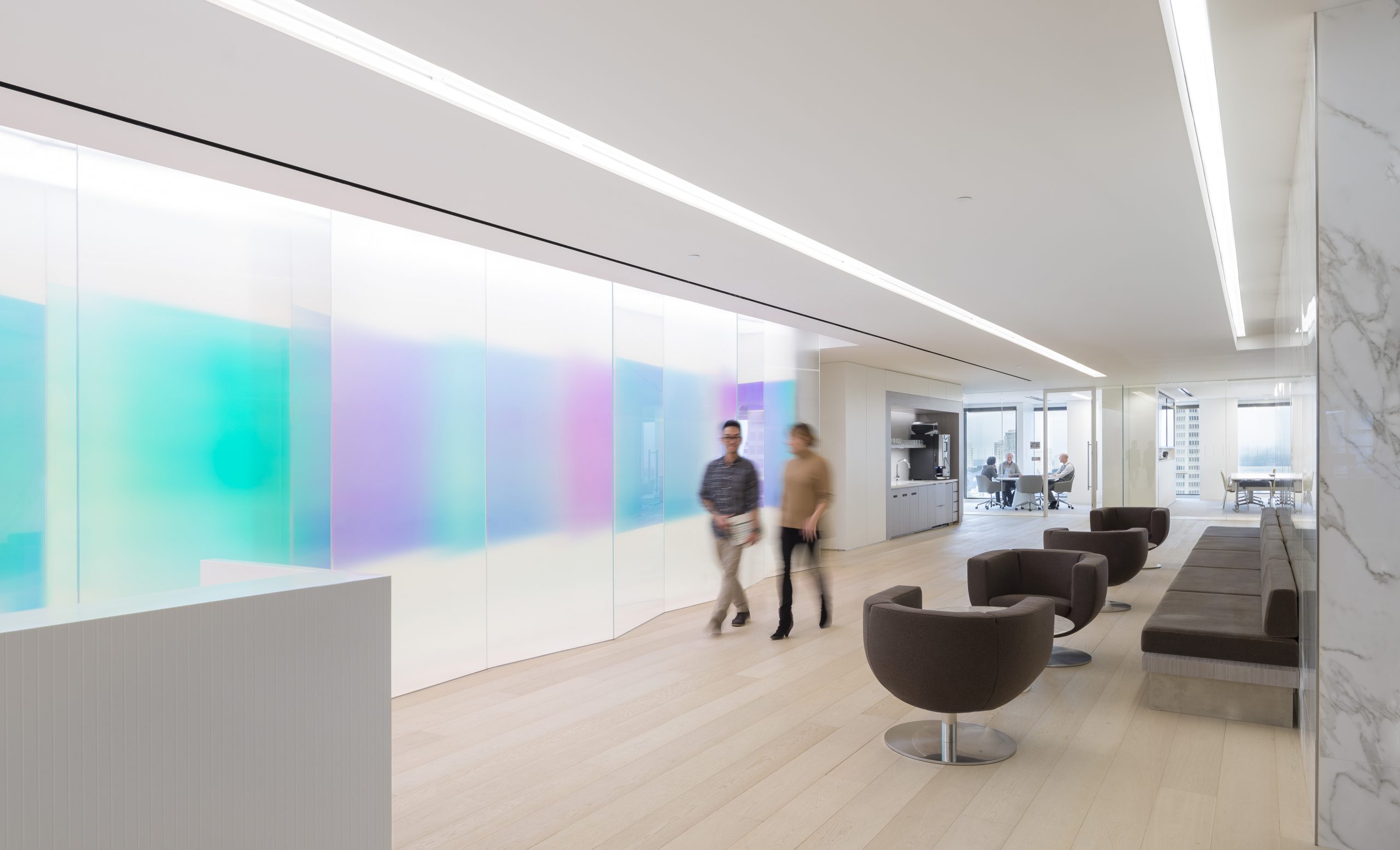 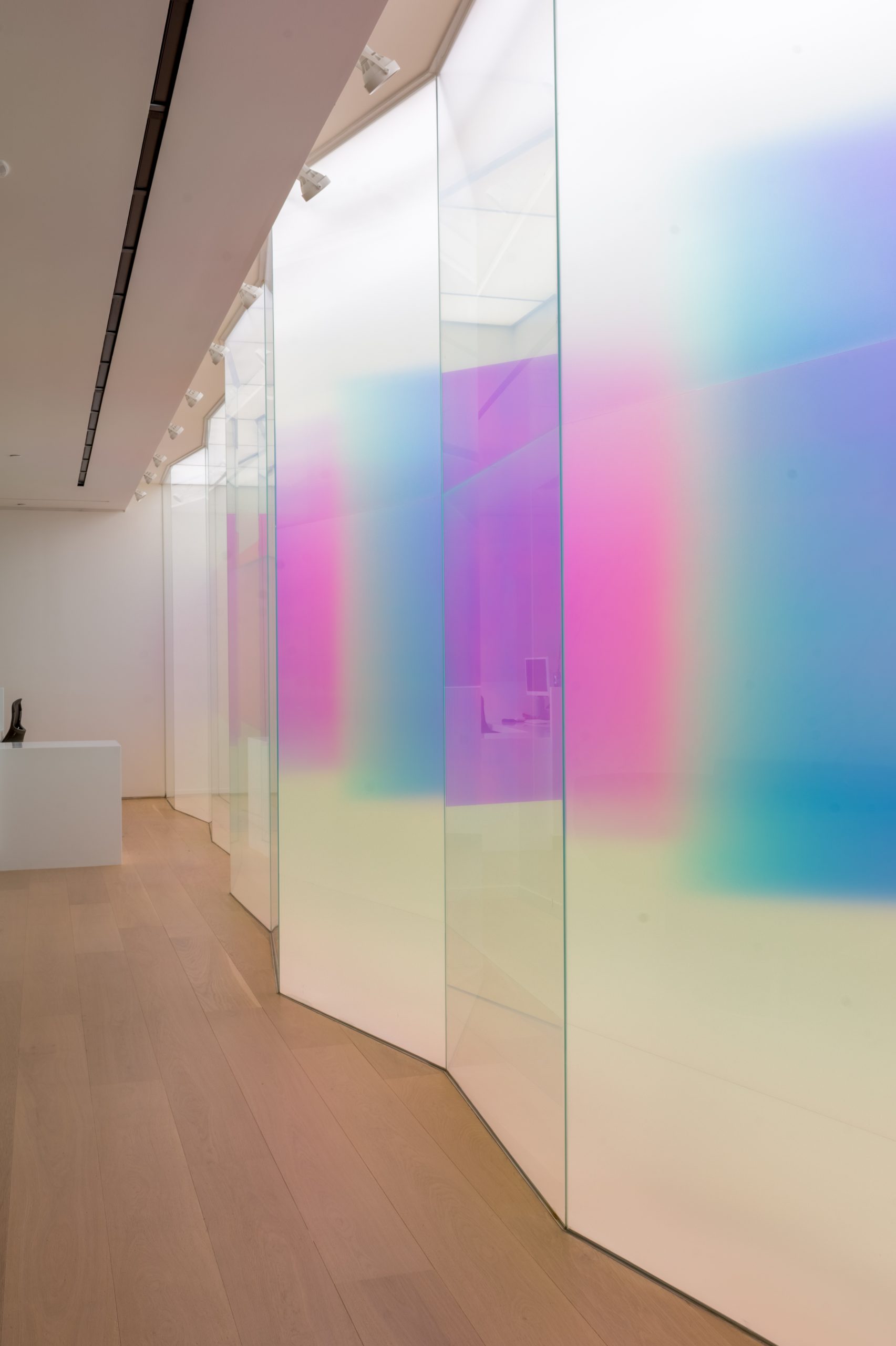 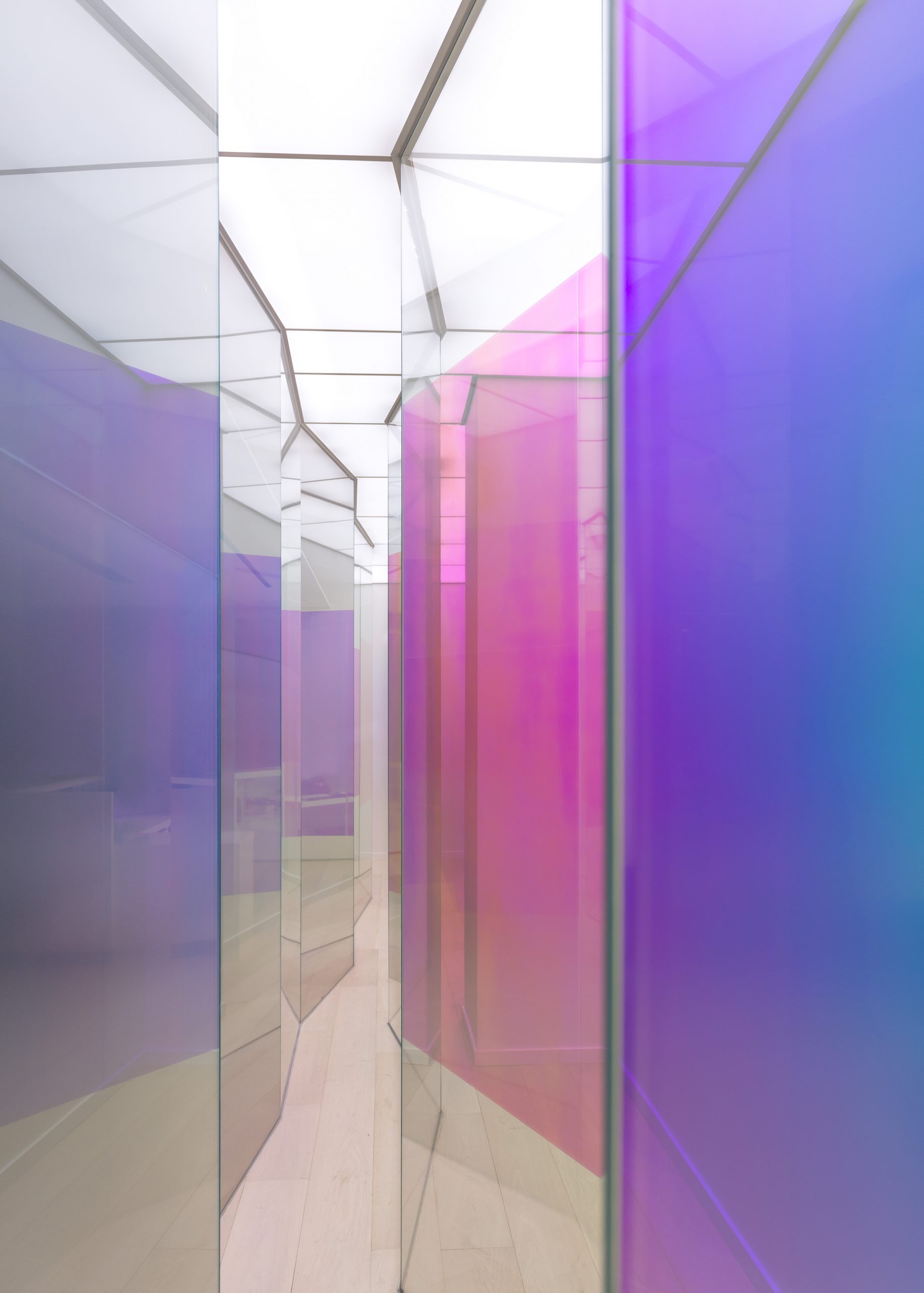 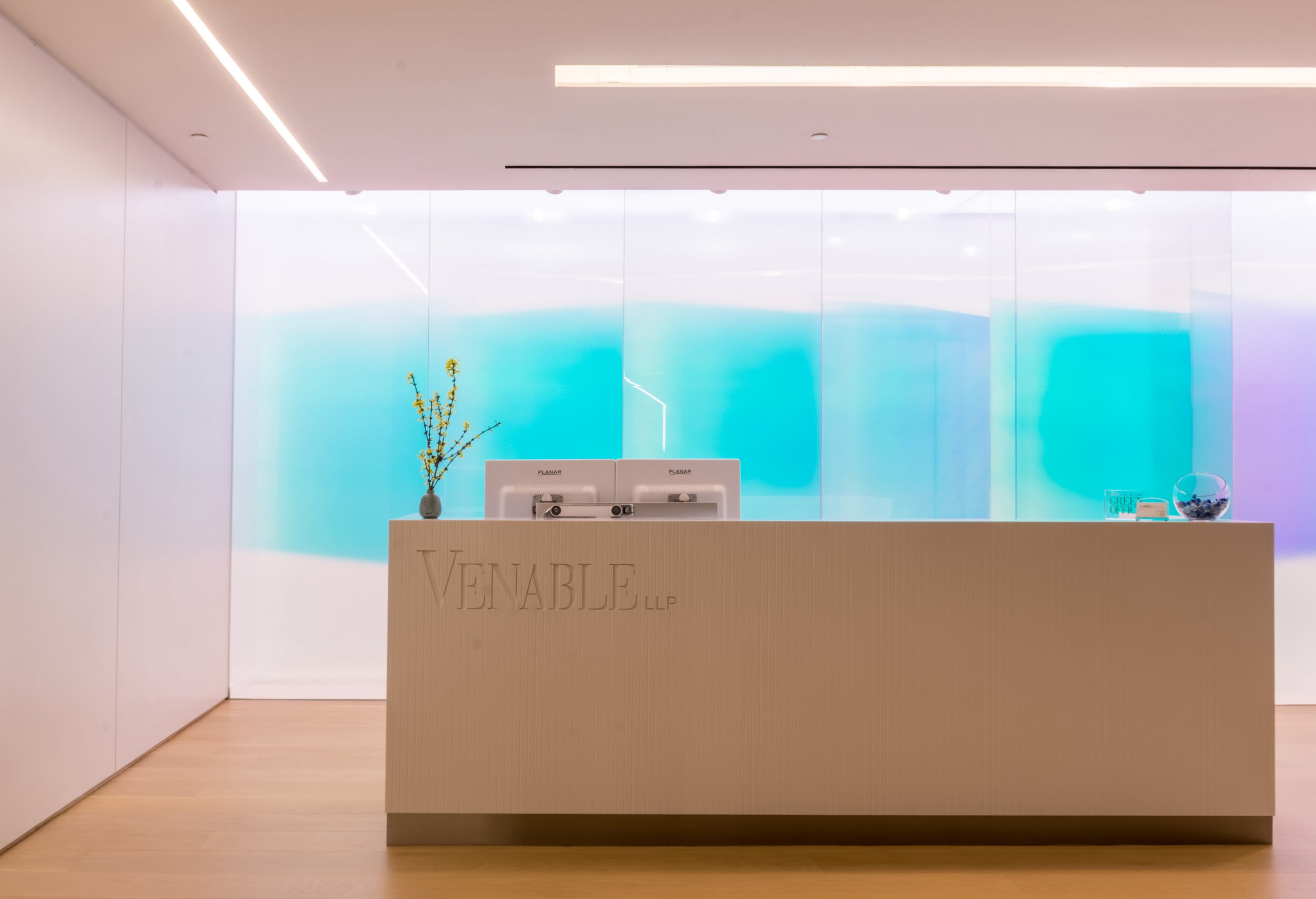 The tradition of painting inspires this sculpture. “Many Bays, Many Days” reveals itself as an unfolding landscape painting in a way that one experiences a Japanese folding screen or a scroll. Measuring 39′ long by 10′ tall by 68″ deep, the sculpture is comprised of two folding glass walls made of 1/2″ thick glass and a variety of films. Overhead LED lighting illuminates the walls according to circadian rhythms daily. A chromatic mix of colored light marks special occasions.

The elevator lobby at the 38th floor leads into Venable's reception area, which gives no hint of the spectacular view of the San Francisco Bay to the right. We looked for a way of drawing people into the reception space and then directing their gaze towards the magnificent view of Alcatraz and the Marin Headlands across the San Francisco Bay. A combination of trapezoidal shapes and folding glass walls became devices for encouraging the viewer to move through the reception area.

The client desired to have a more modern look and feel to their new law offices in downtown San Francisco. The architect, Gensler, originally developed the idea for a faceted glass wall behind the reception desk instead of the often used wood paneled wall. They drew their inspiration from the zigzagging shape of the building footprint at 101 California Street. Gensler invited Daniel Winterich to interpret the reception glass wall concept into a permanent art installation. The final design concept includes a pair of faceted glass walls that interact with each other as one walks through the reception area. Shifting angles of color and shapes draw people from one end of the space to the other.

Renaissance traditions provide an underpinning in this installation. A sense of sfumato is created by a frosted film which alternately reveals and conceals the colored glass composition behind it. While painters of the Renaissance sought to factually represent three-dimensional objects by rendering them on a two-dimensional plane, achieving the opposite became the goal of this installation. Elusive, three-dimensional objects appear and disappear through a combination of light, color, and the visitor’s viewpoint.