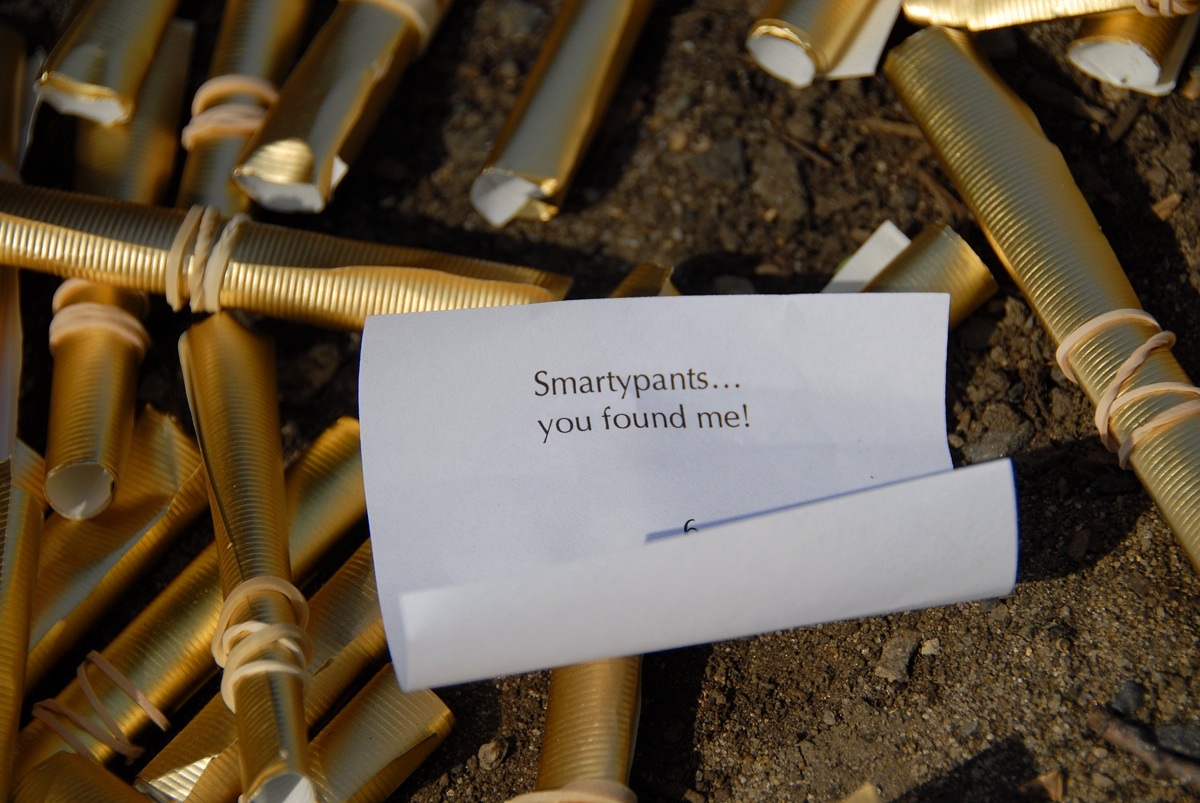 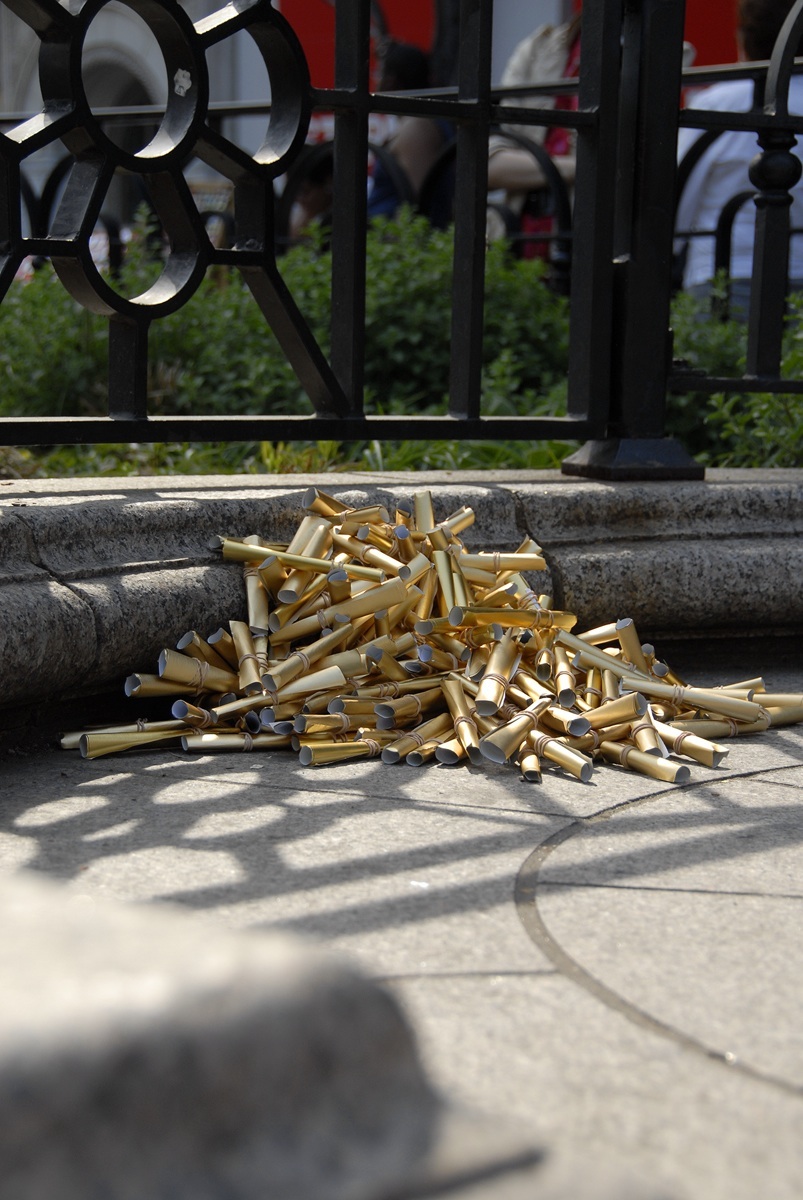 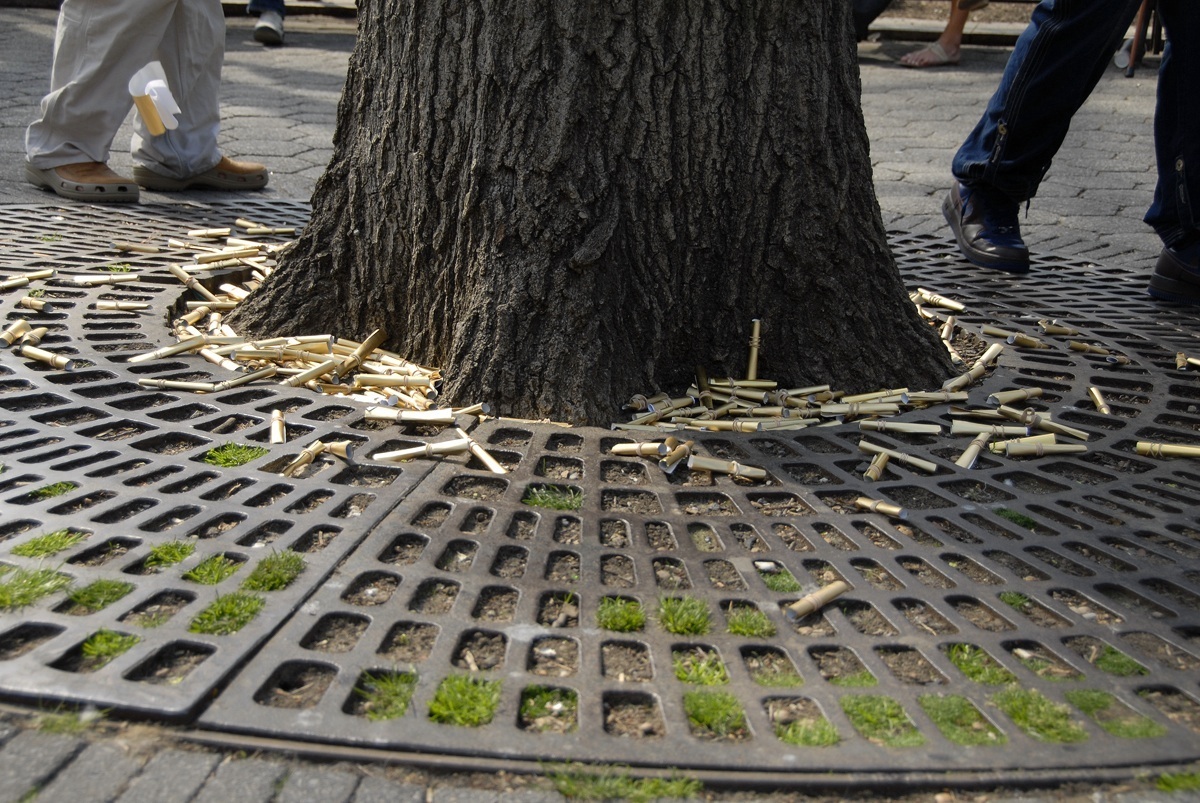 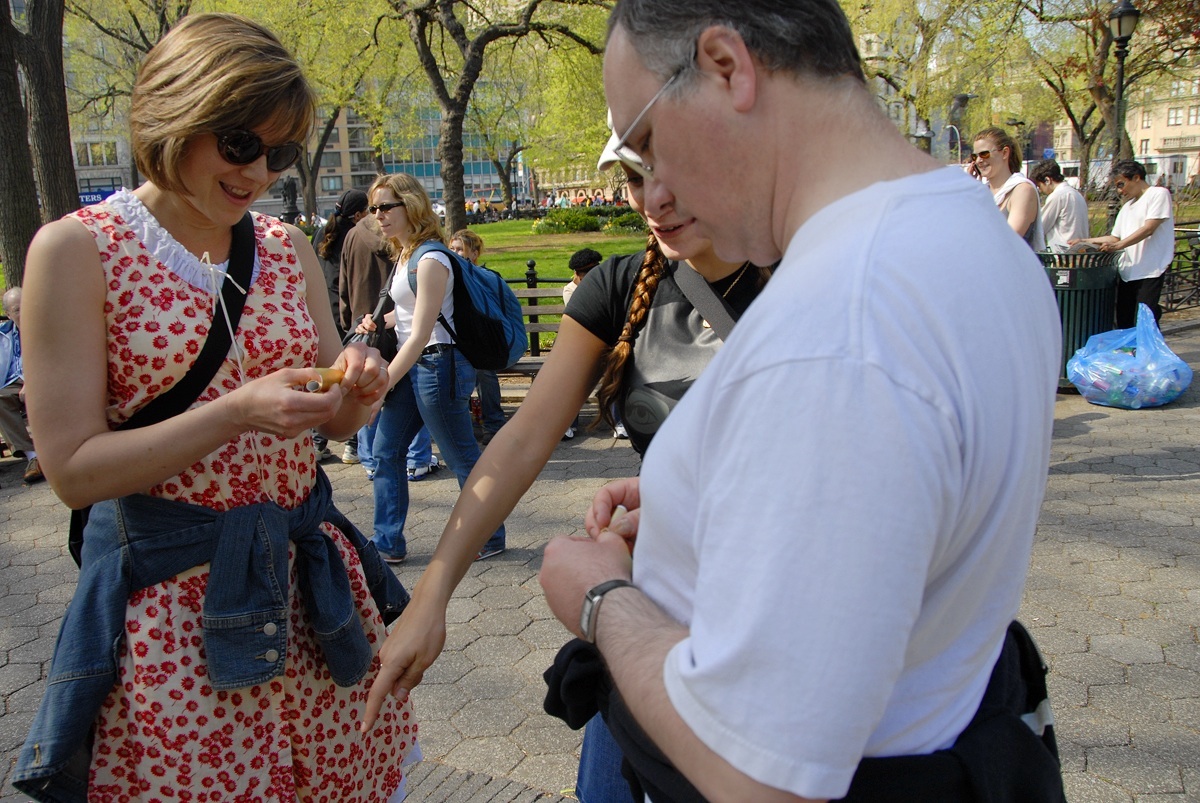 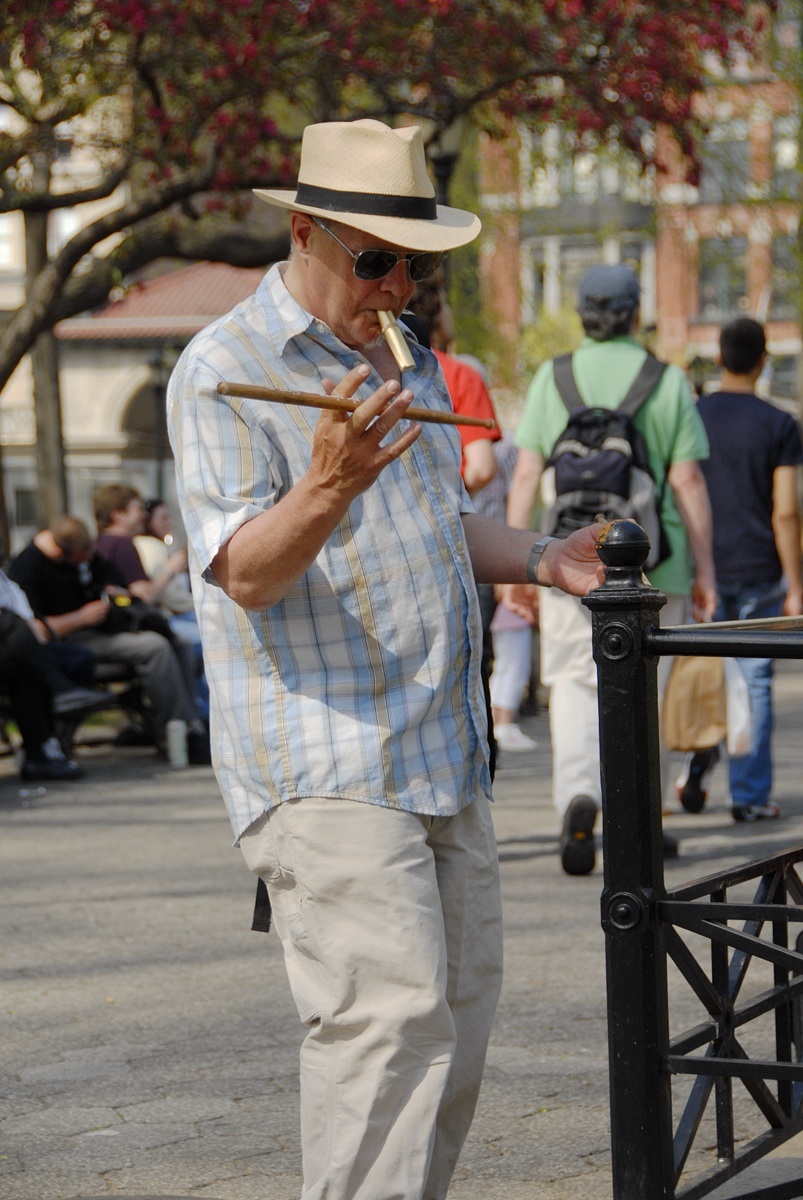 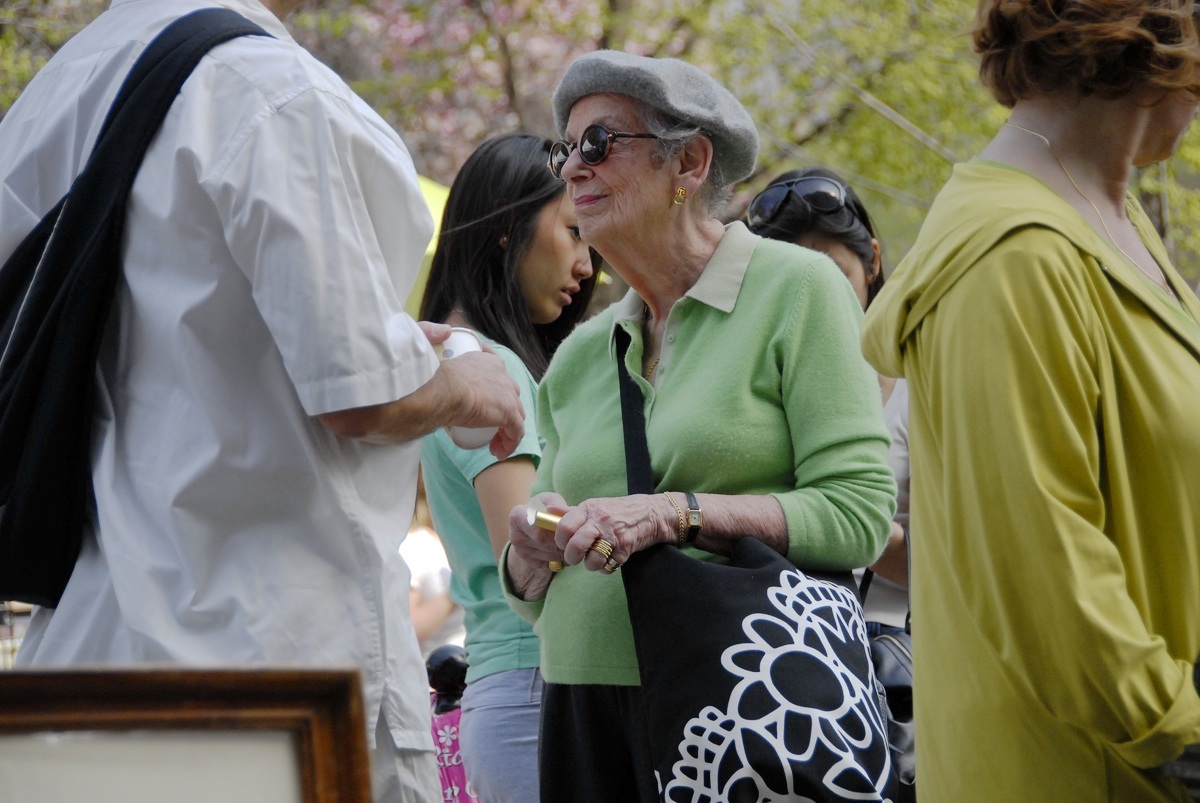 One Saturday, Love Notes, messages inside tiny golden tubes, appeared in the colorful energy riot of NYC’s Union Square Park. Interjecting surprise and an ephemeral moment into a city’s diary as people discovered, slowed down, and interacted with the notes. Good feelings on a human scale generated! The project was a temporary public space installation, a performance piece involving the public, and a photographic essay to capture reactions as people read and played with the notes. Notes led like breadcrumbs along a path, at people’s feet, under trees, and ended at the feet of the Gandhi statue.

Green Provocateur’s goal was to facilitate a creative collaboration of commissioned artists and the general public, for all to experience a personal discovery and communication they never had before in a public arena.

The various communications enabled multi-levels of engagement as artists from various disciplines were asked to imagine the note recipients while assembling the notes. Four different messages, roll-wrapped in gold paper fastened with rubber bands or red string, offered simple skills with the intention to connect. Artists were selected to distribute the notes in the park and speak to people about the experience. A photographer to capture the range of reactions of people was integral to the project as reactions ranged from delight to being playful with the Love Notes, reading them, keeping them, passing them on, putting them in pockets or sharing with a friend. Some notes were kicked about scattered under shuffling feet and some were passed along with the excited story of discovery, transforming (on purpose) any intents or goals of the project.

Green Provocateur’s goal was art oriented, the creativity and connectivity of this simple project can scale and repeat, offering expressions to all levels of individuals.

Initially the Love Notes project was planned to encircle to park with multiple artists coordinated to spread the notes and complete a circle around the perimeter. Due to rain on the set date, and a rain date for which a smaller amount of artists were available, the project actualized on a smaller scale, which ultimately allowed everyone to experience, capture and share the reactions of note finders. The prep time to make 1000’s of notes to distribute also allowed artists to delve into a simple, meditative process different from their own creative work, which was an enriching experience for them. The random placements, under a statue or handed to someone made for more varied and surprising reactions.

The contextual history of Love Notes ranges from Japanese fortune note traditions to and to possible futures of Love Notes projects in relation to outer space is explained here in this blog post about the project. http://thejadedress.com/2009/03/02/love-notes-1/ The simplicity of the project was echoed by the “Subway Therapy” post-it note wall in NYC’s subway after the inauguration, reflecting our ongoing primal need for love notes and shared messaging.