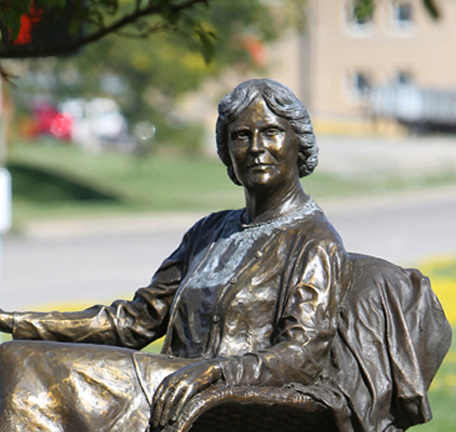 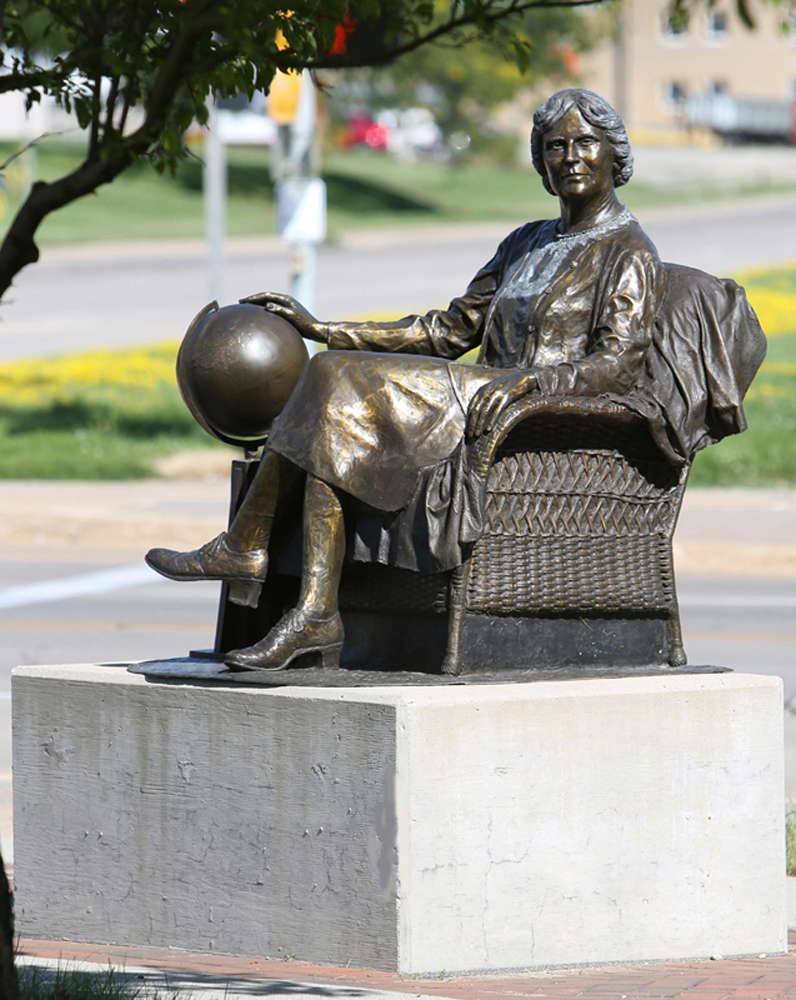 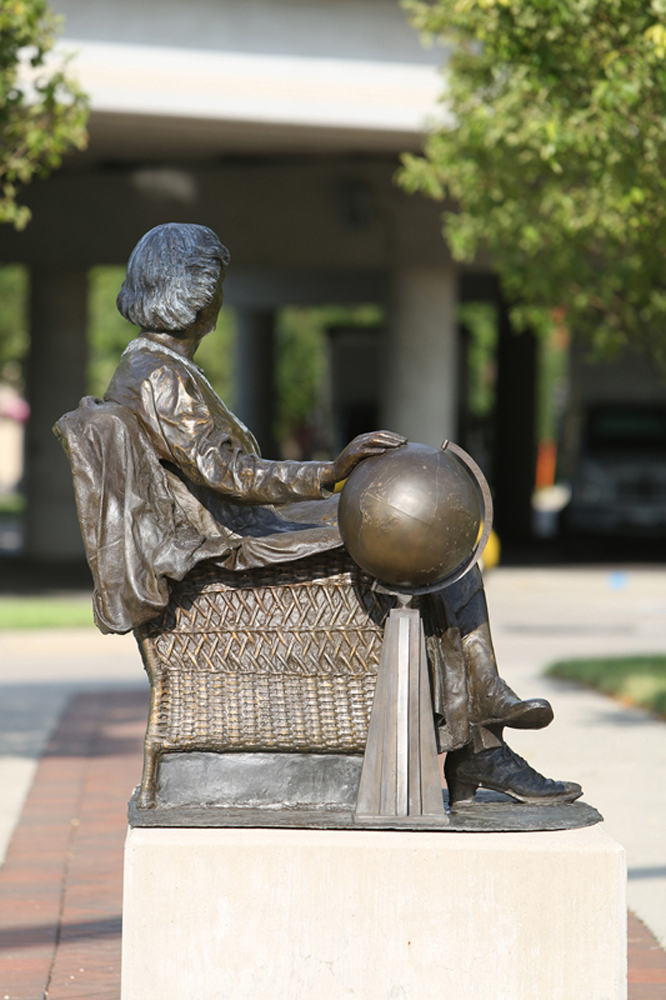 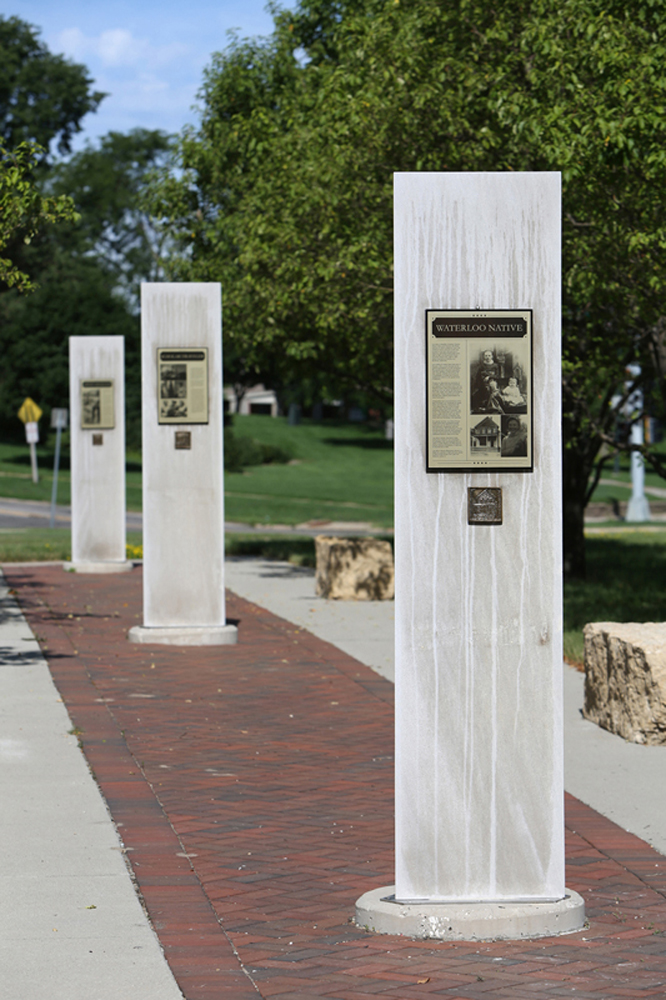 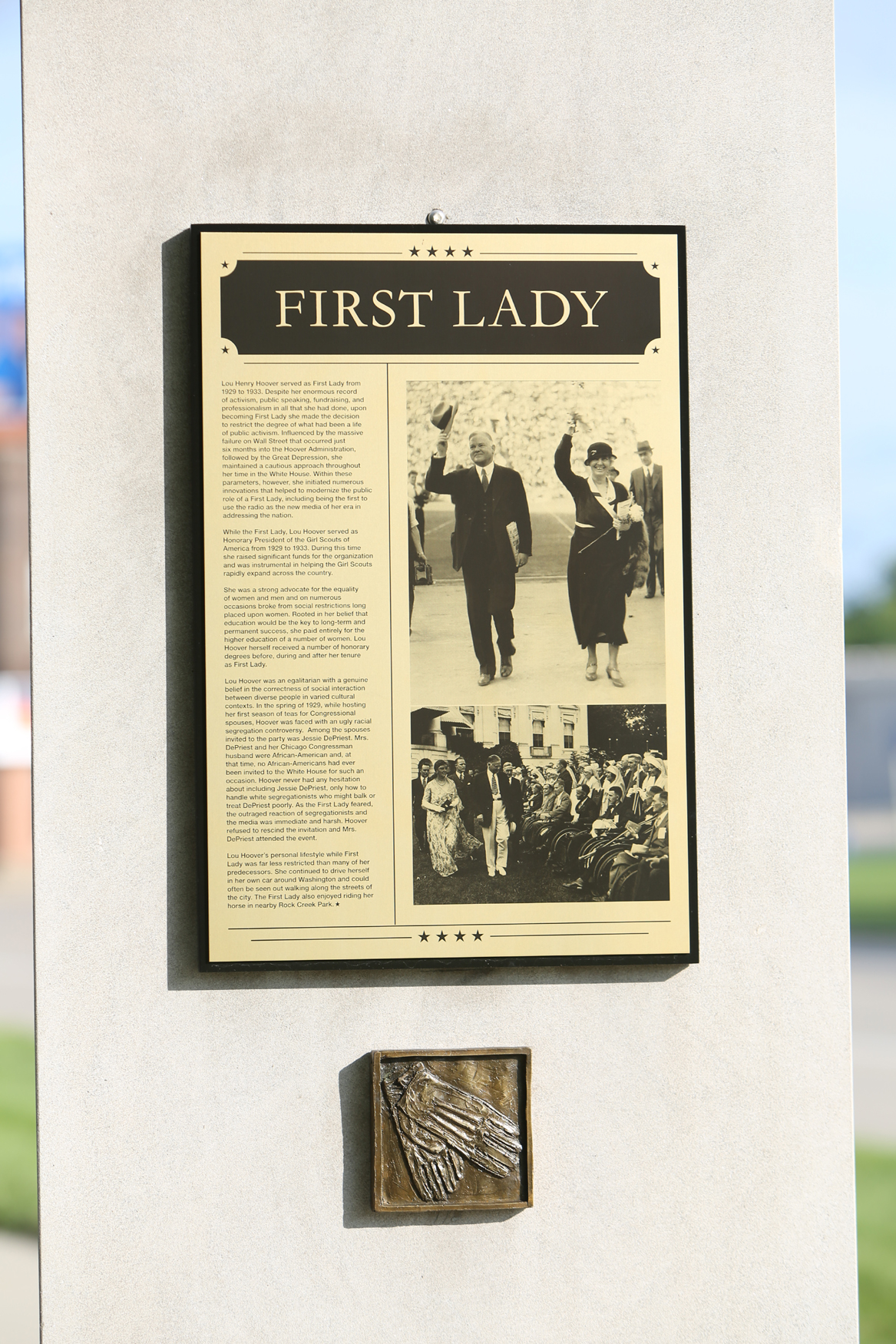 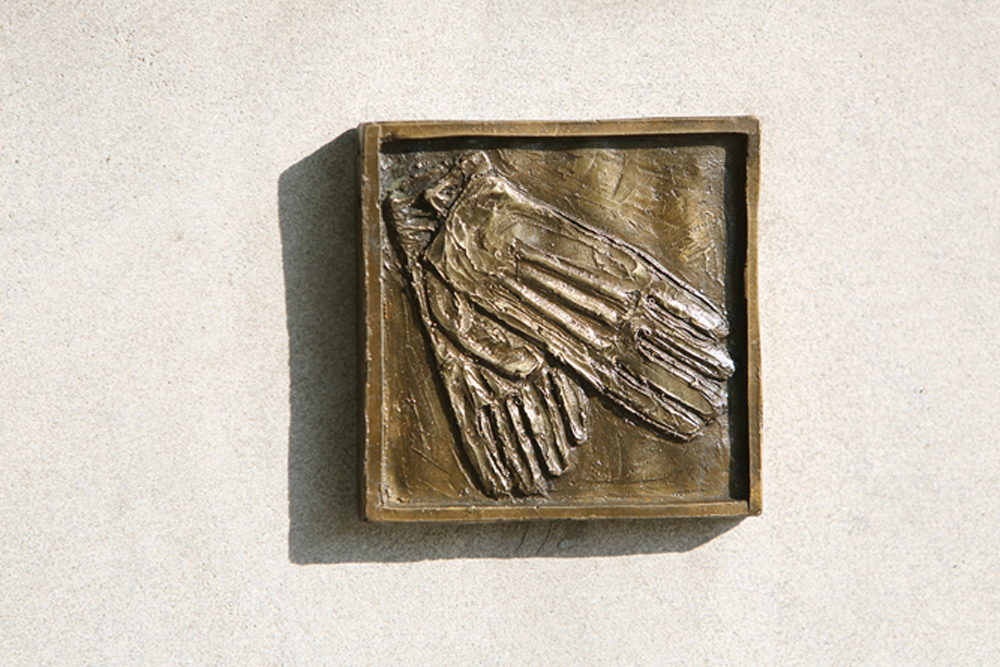 Client: City of Waterloo, Center for the Arts

“Lou Henry Hoover Memorial” premieres an over life-size bronze image of Lou Henry Hoover, who is seated in a wicker lawn chair, with her right hand draped over a globe. Nine photo metal aluminum collage plaques describe the eras of her life. They are mounted on three triangular, seven foot tall limestone columns. The composition is placed upon two walkways within Lou Hoover Birthplace Park, in Waterloo, Iowa, installed in June of 2016.

Waterloo Center for the Arts gave me the opportunity to complete a sculpture of Lou Henry Hoover, with accompanying descriptive detail. The Church Row Neighborhood Association, The City of Waterloo in contract with the Iowa D.O.T., had been developing a park within a one block area. That land is where the original home was located, where Lou Henry was born.
The story of Lou Henry Hoover, wife of President Herbert Hoover, is fascinating and varied. She was personable and approachable, as well as possessing a depth of intellect and impact on national and international interests. She is represented relaxed in a wicker lawn chair, similar to one at their retreat at Rapidan. Her right hand draped over a globe symbolizes her sphere of influence and activity around the world.
I was asked to prepare nine plaques representing various eras and interests of her life. They are; Waterloo Native, Sportswoman, Activist, Philanthropist, Designer/Artist, Scholar/Traveler, Wife/Mother, Girl Scouts, and First Lady. Those 12 by 18 inch plaques are arranged on 3 upright stone columns, centered in the sidewalk, for walk-by review. Each collage is accented with a 4 by 4 inch bronze tablet of the same theme.

In order to create the clay prototype of the sculpture, I worked directly at scale, hiring several models to complete the seated image of Lou Hoover, who appears to be in her later years. Century Bronze of Colorado collaborated well with me to cast the piece in bronze, for a pre-deadline installation.
I was helped immensely with research by the staff at the Herbert Hoover Presidential Library in West Branch, Iowa to choose photos that would work informatively, and translate well in the photo metal process, for the nine plaques.
I made an initial selection and layout of images and text. Those layouts were submitted to Chawne Paige, staff curator and graphic designer at the Waterloo Center for the Arts, who chose and arranged the best photos for reproduction. He placed the text in context to the photos. It was then reviewed and edited by several staff members at the Center for the Arts.
Weber Stone Quarry of Anamosa, Iowa, cut the triangular shaped Indiana limestone columns, and installed them. David Rossi, an associate, expertly installed the plaques in their proper sequence.

The Waterloo Center for the Arts has coordinated and scheduled with the nearby Grout Museum, several events and tours of the site, to be conducted within the museum's educational history program. The Birthplace Park project is now complete after more than a decade of planning and fund raising for the project.