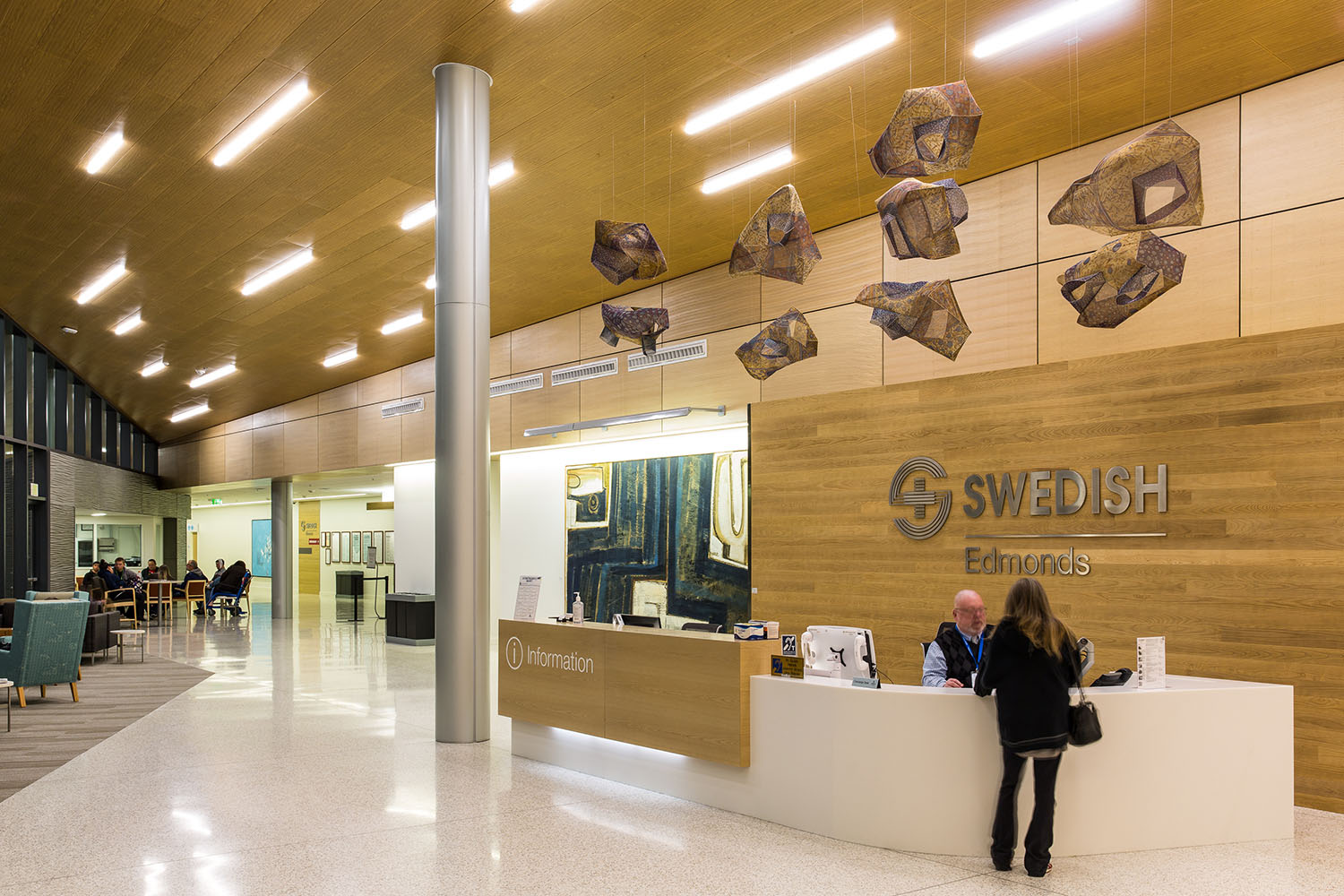 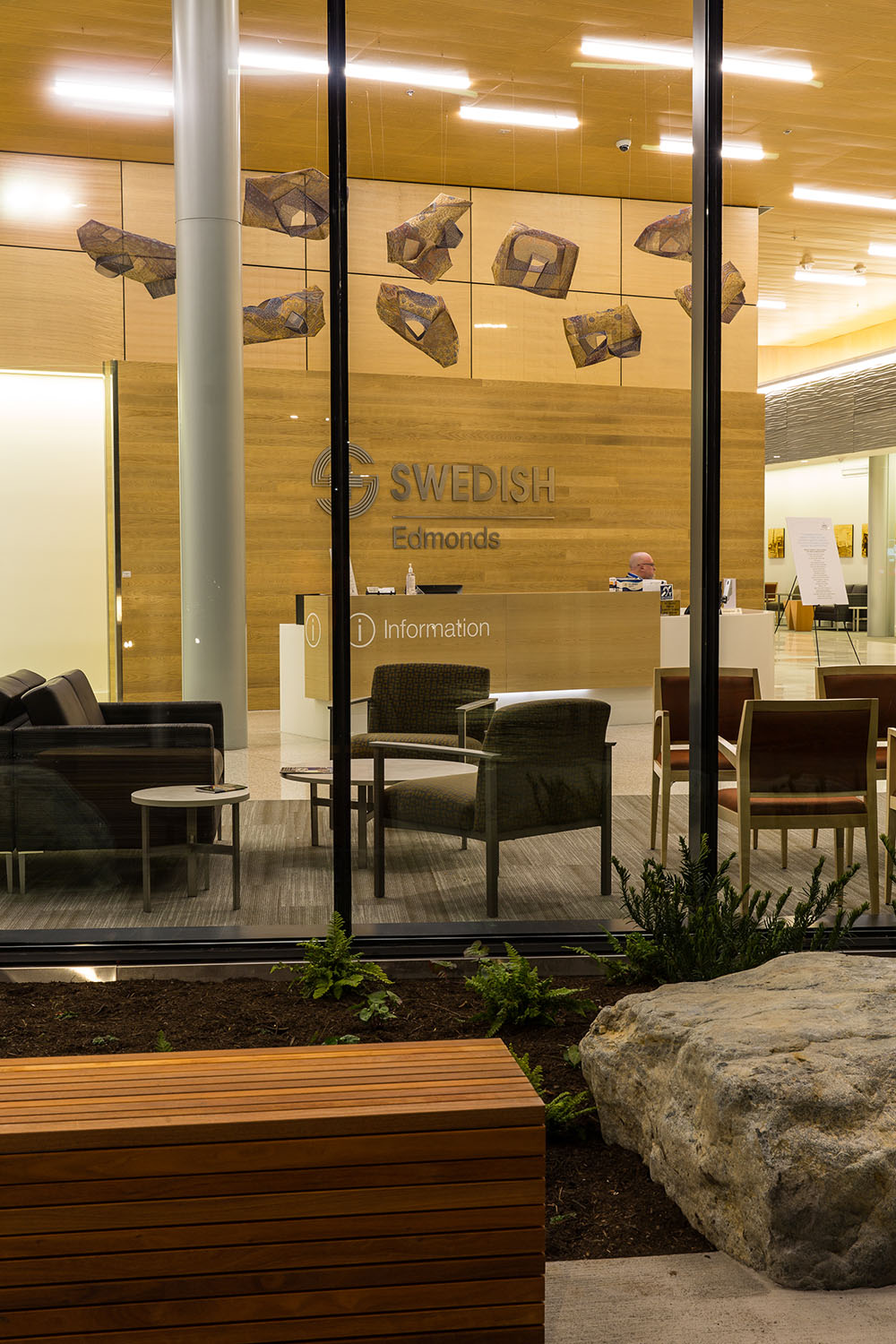 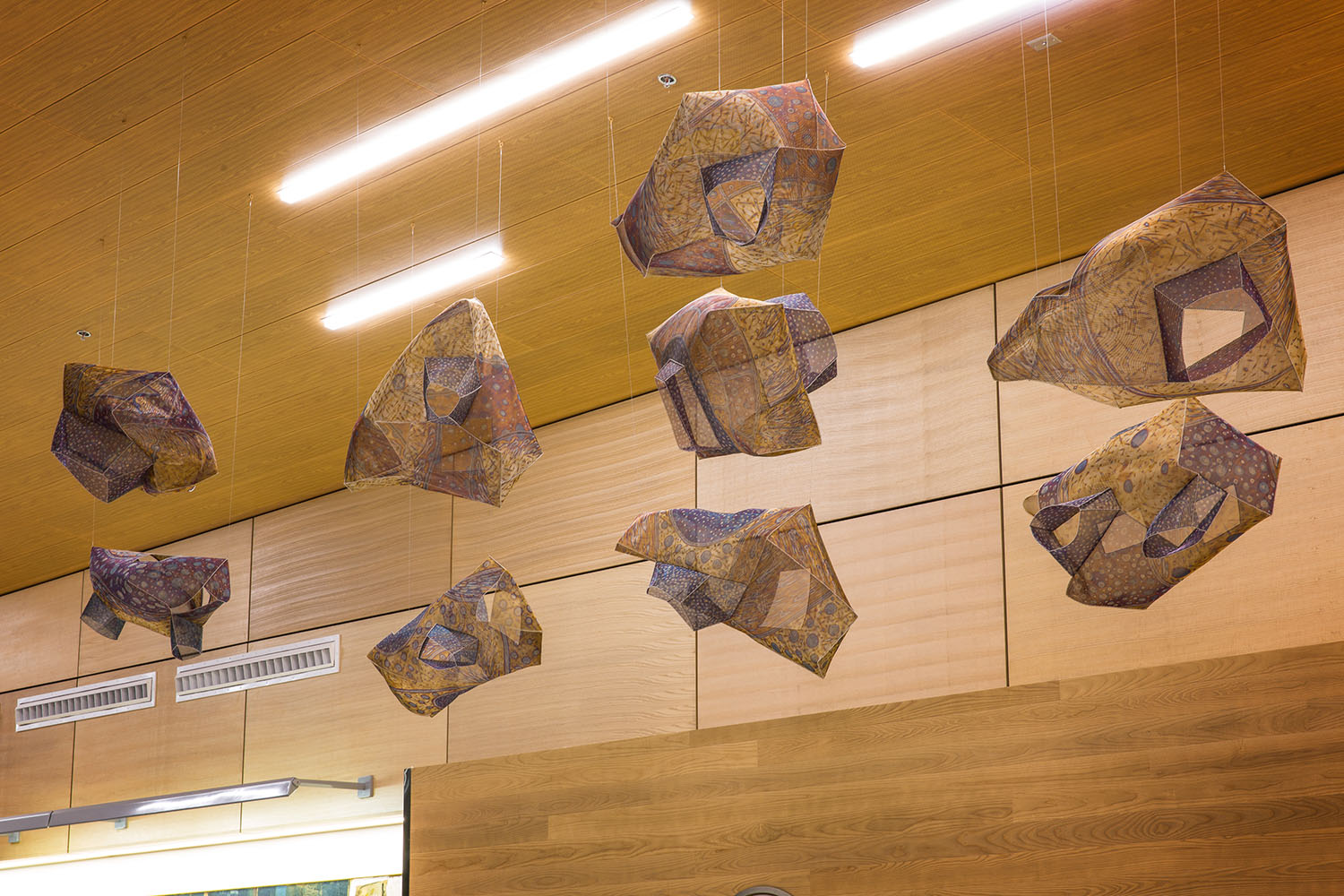 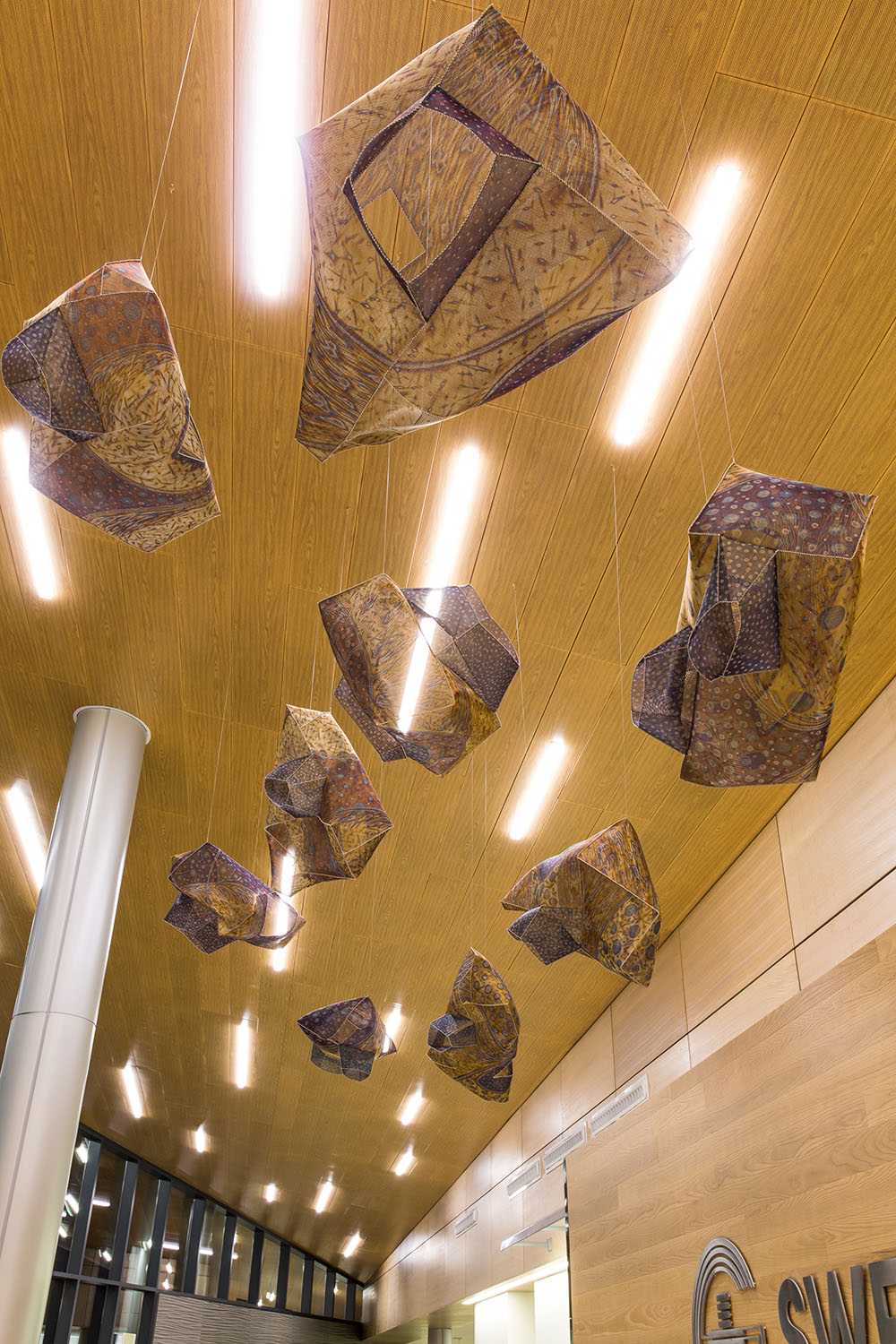 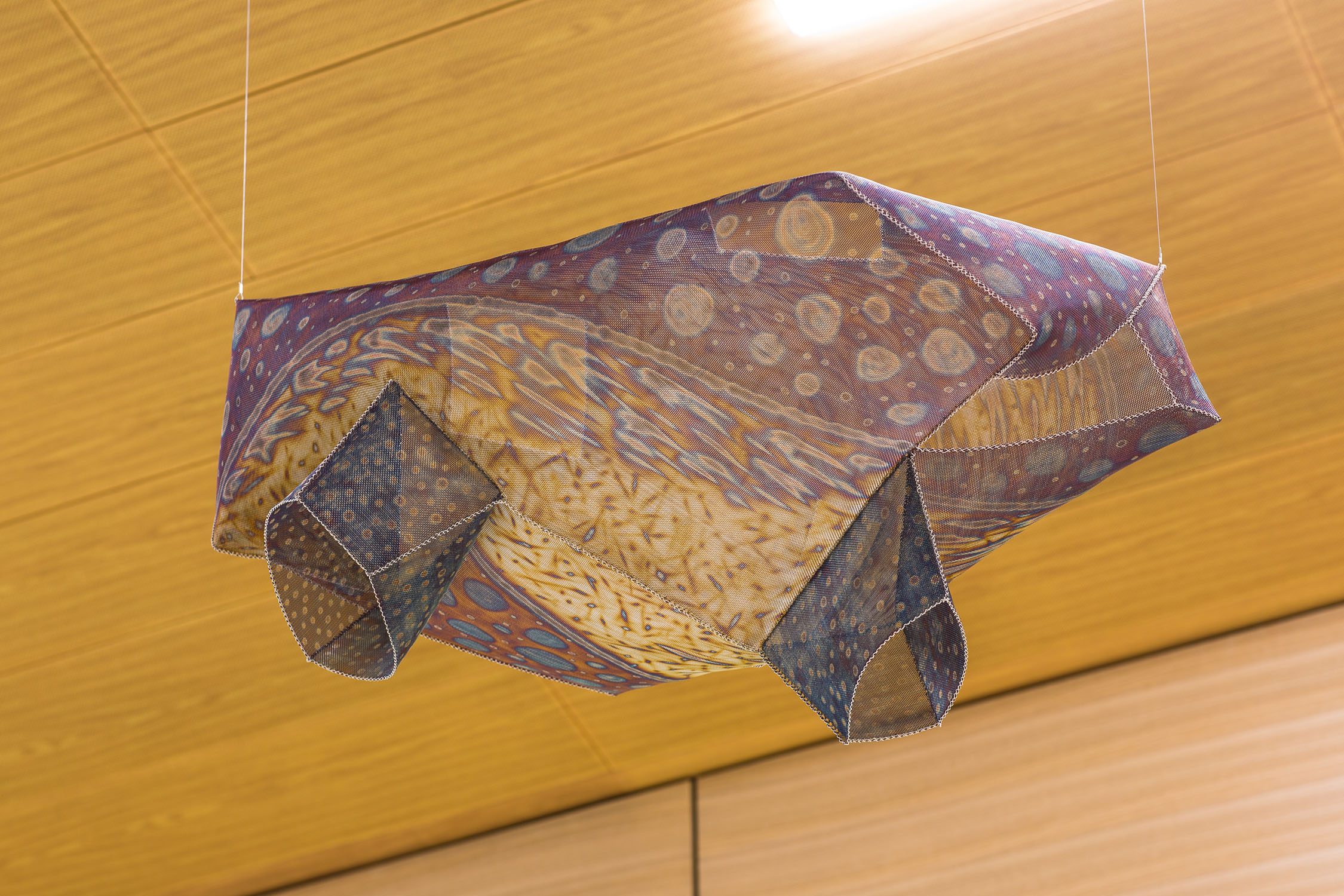 “Lightness of Becoming Form” was made out of nine sheets of torch treated (using a hand held propane torch) .017-gage industrially woven stainless steel mesh, which were then cut and connected together to create three-dimensional forms. The connecting of the mesh was done by hand using linesman pliers. The seams of each form were then hand stitched using 24-gage white-coated copper wire. The approximate size of the space for the nine suspended works is 18 feet wide and 10 feet deep.

Integrating the commission artwork into the site was very important to the design process. The artwork needed to compliment the pre-chosen color palette of the site and work with the other artworks already selected for the site. I took these things and the healthcare mission of the facility into consideration when I designed the works.
The concept I was working with in creating “Lightness of Becoming Form” was life force, both human and the stellar energy that surrounds us. I wanted to suggest the interplay of negative and positive spatial elements going through a transformation and a morphing of forms. In keeping with the healthcare concept I used white cross-stitching of the seams to suggest the joining together of tissue and the connecting together of shapes and limbs. The open semi-transparency of each form was suitable to a medical facility because it invited exterior and interior examination as if viewing an x-ray.

I worked closely with the Swedish Medical Center Art Consultant who was hired by the Center to coordinate all commission and art related projects. She guided the process along acting as an intermediary between the Medical Center’s Art Advisory Committee and me. She instructed me on the concerns of the committee and their design concerns. After the first consult and concept overview I submitted two of the nine pieces and a photo mock up to the committee. They were excited about the works I presented and then commissioned me to create the rest of the nine works.
I did the installation myself working with the consultant and the building construction supervisor who helped facilitate the process. The installation took half a day to complete.