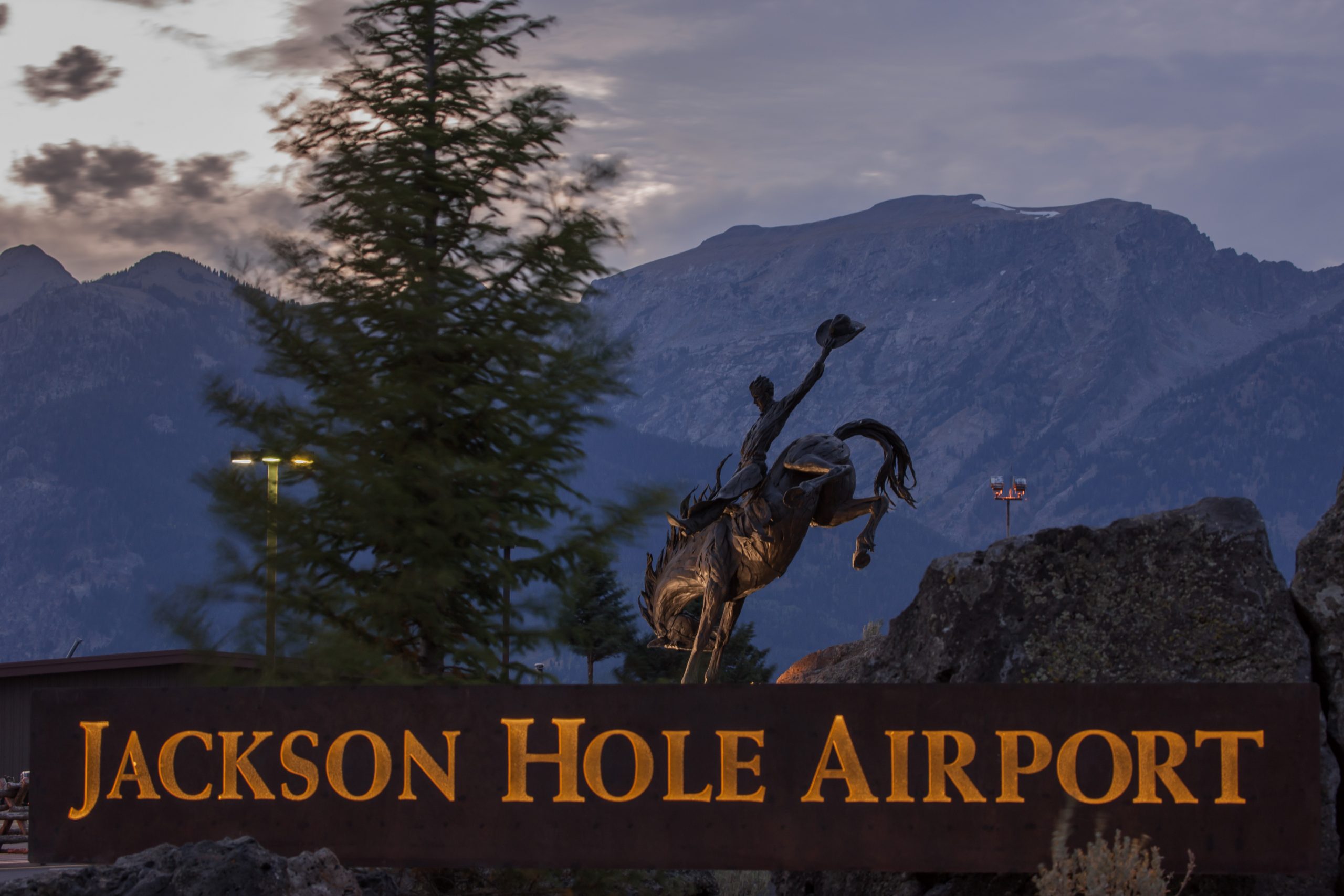 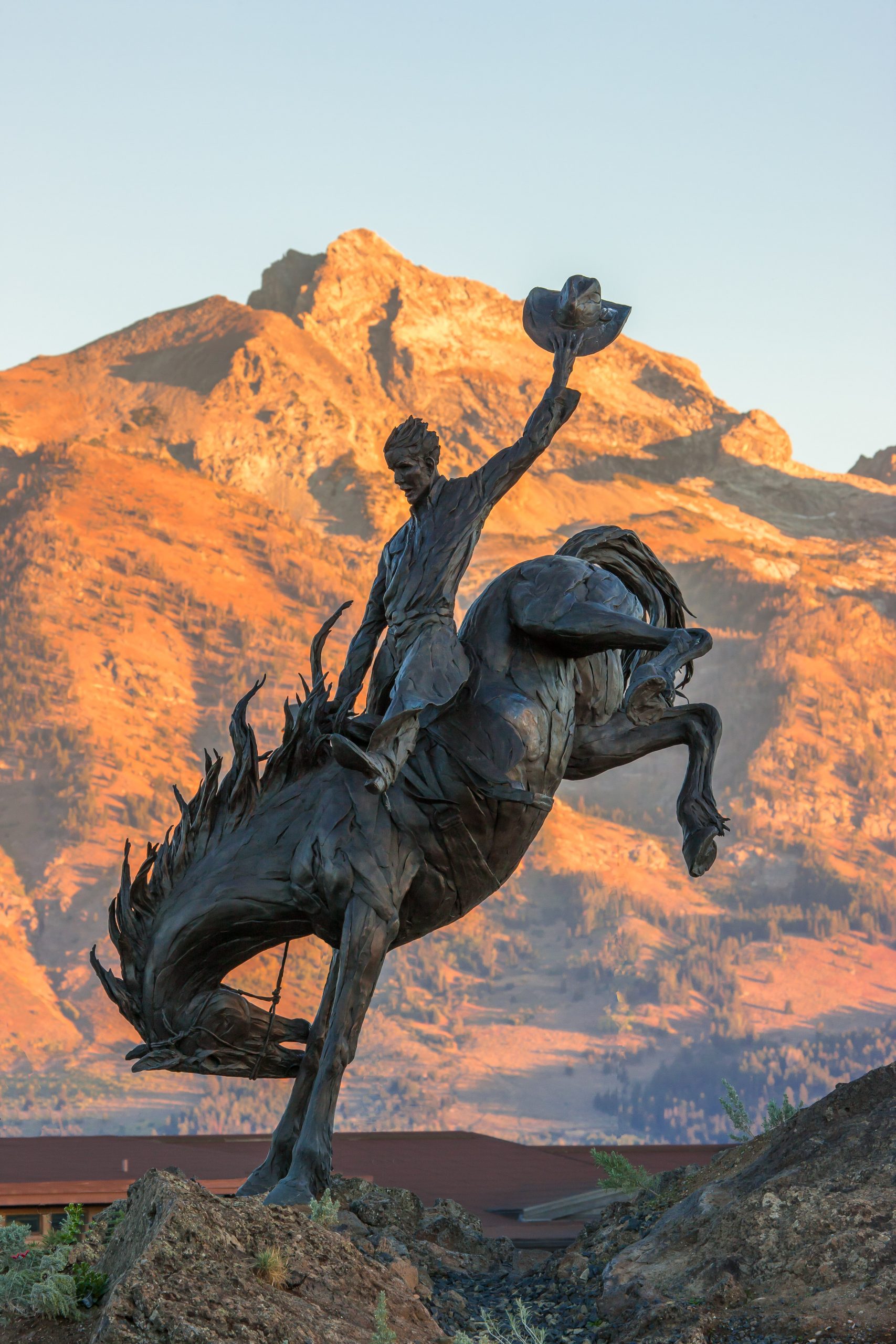 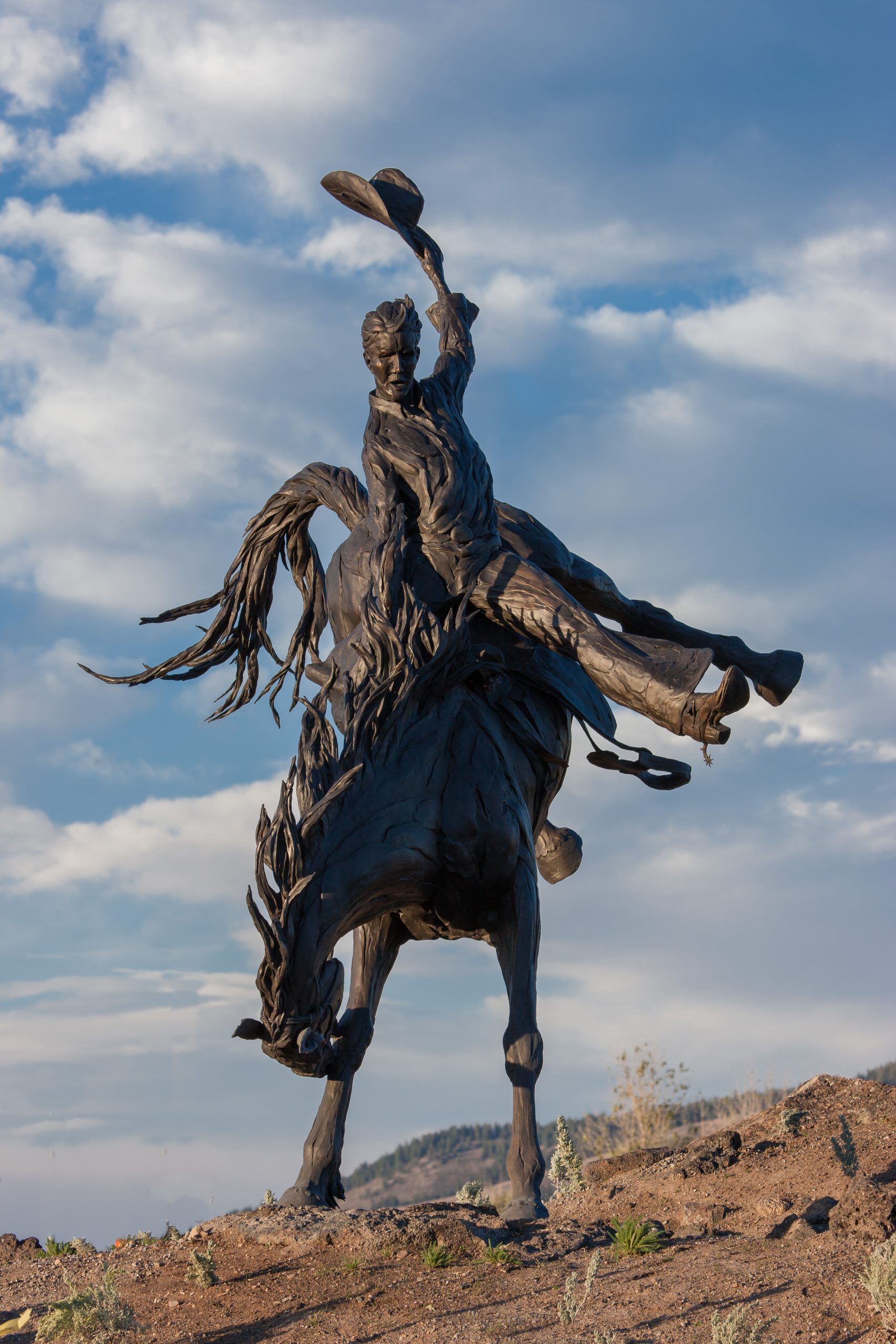 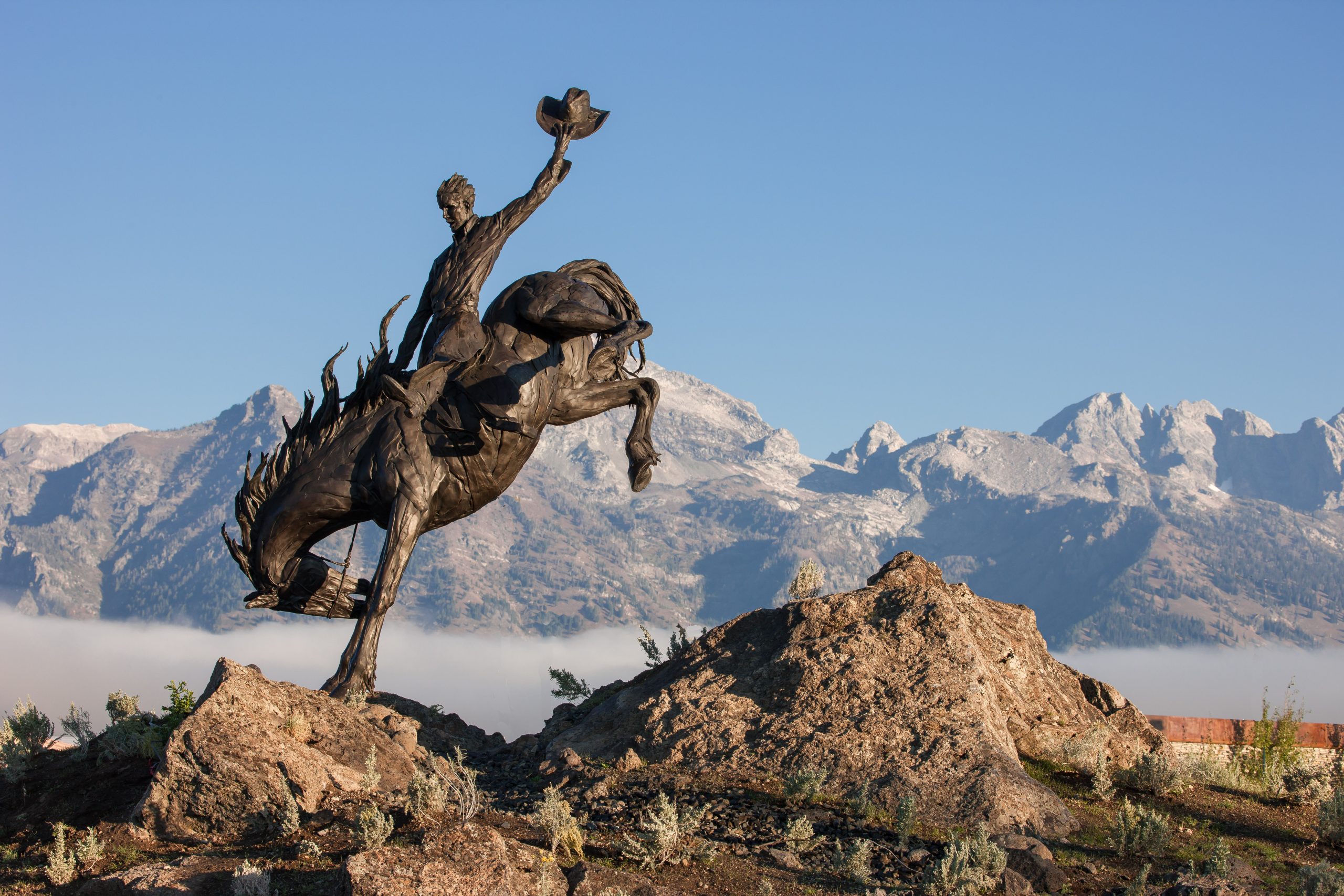 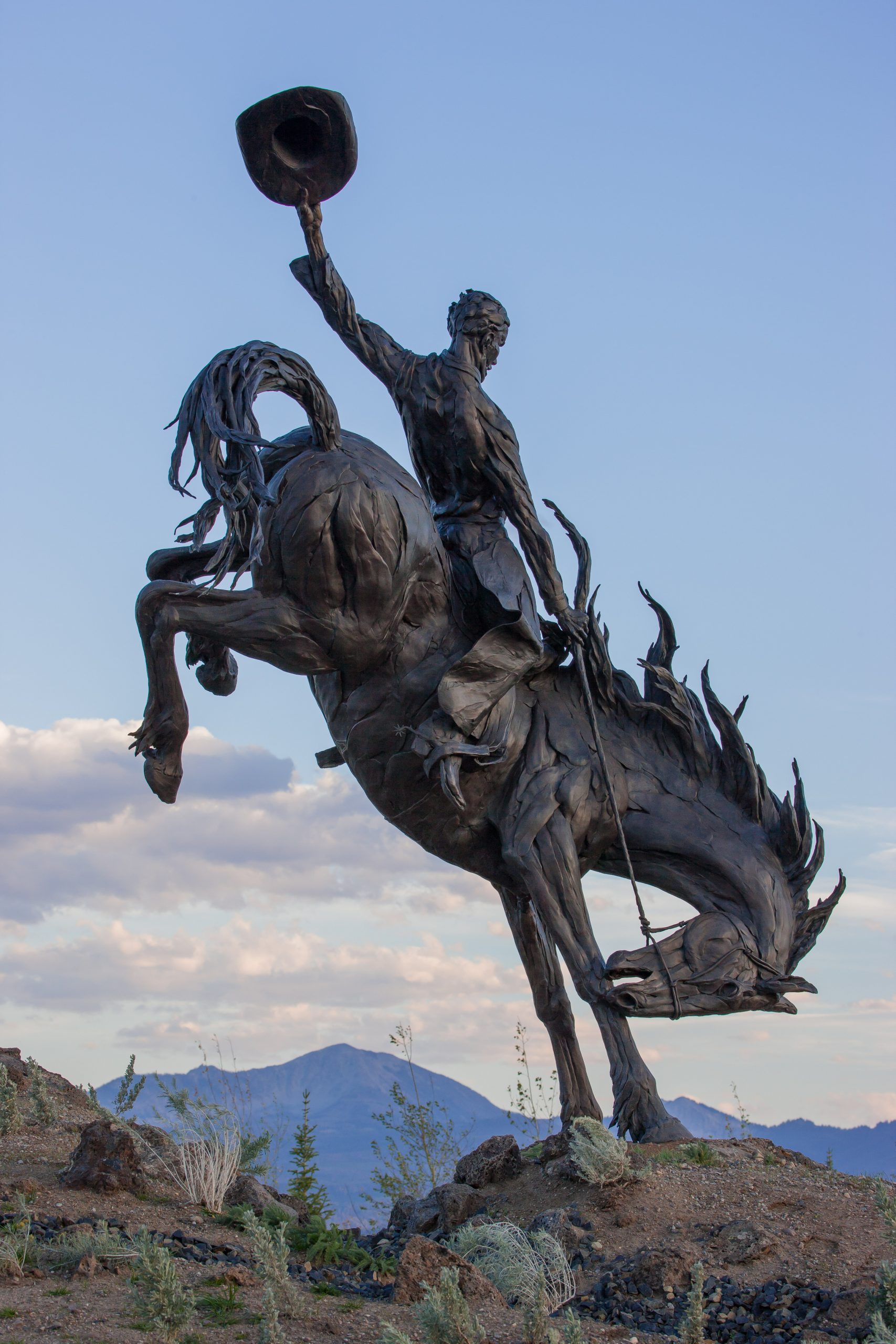 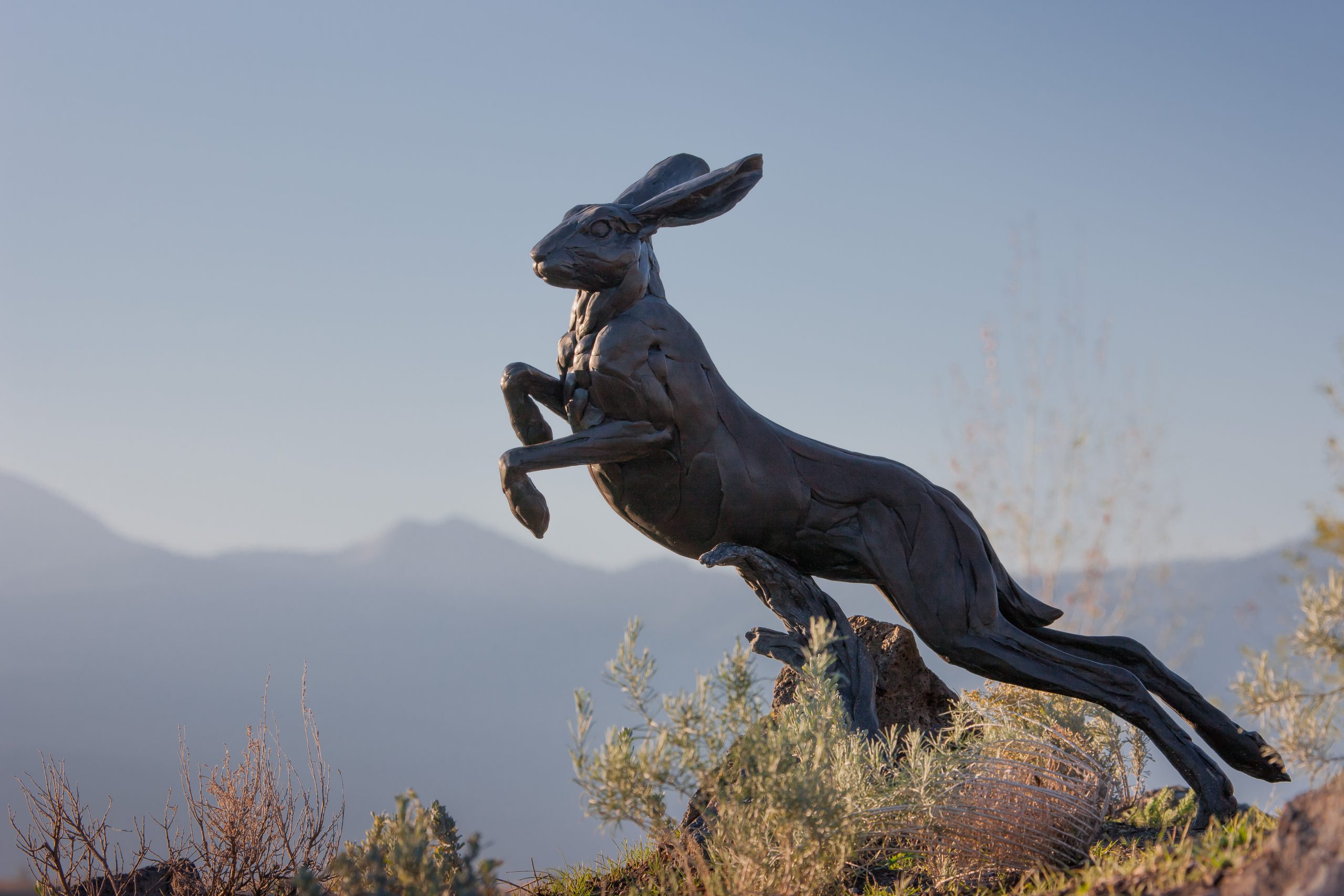 “Battle of Wills”, located at the entrance to the Jackson Hole Airport, is an interpretation of the Wyoming state logo. As vehicles drive around the sculpture, different views show aspects to tell the story of this cowboy's ride. On one side, the cowboy is having a celebratory ride. From the other view, viewers recognize the cowboy is heading for a fall! An over life-size jackrabbit leaps away behind the bucking bronco, revealing the reason for the horse’s behavior. The artist designed the landscape, a set of hills and swales, completing the design.

The goal of this sculpture was to provide a sense of place, an iconic image of Wyoming which would greet people as they arrived at the Jackson Hole Airport, and be a lasting image as they departed. Placement of the sculpture in the entrance roundabout was paramount, and the artist designed the landscape of the entire roundabout to emphasize the dynamic components of the sculpture, while also complimenting the surrounding landscape of the Grand Teton Mountains. This sculpture serves to create an identity which is the Jackson Hole Airport, and represents the pioneering spirit of the Wyoming people.

The artist worked closely for over two years with the Project Coordinator for the Jackson Hole Airport and the Airport Board as well as other airport personnel. Additionally, extensive work was done with a Structural Engineer to assure the sculpture would withstand any seismic activity for which the area is prone. A Landscape Architect was also very involved in the design and implementation. Very large boulders were brought in and installed, creating the vertical elements of the landscape, which mimic the mountains which surround Jackson Hole. Because this airport is the only airport within a national park, all the landscape elements had to be native plants, which required specialized installation and care. The dedication in September of 2016 was attended by the Govenor of Wyoming, the Airport Board, The Superintendent of the National Park, and the regional director of the FAA. Acknowledging the collaborative effort between artist, airport staff, community support, and national park support for this project.