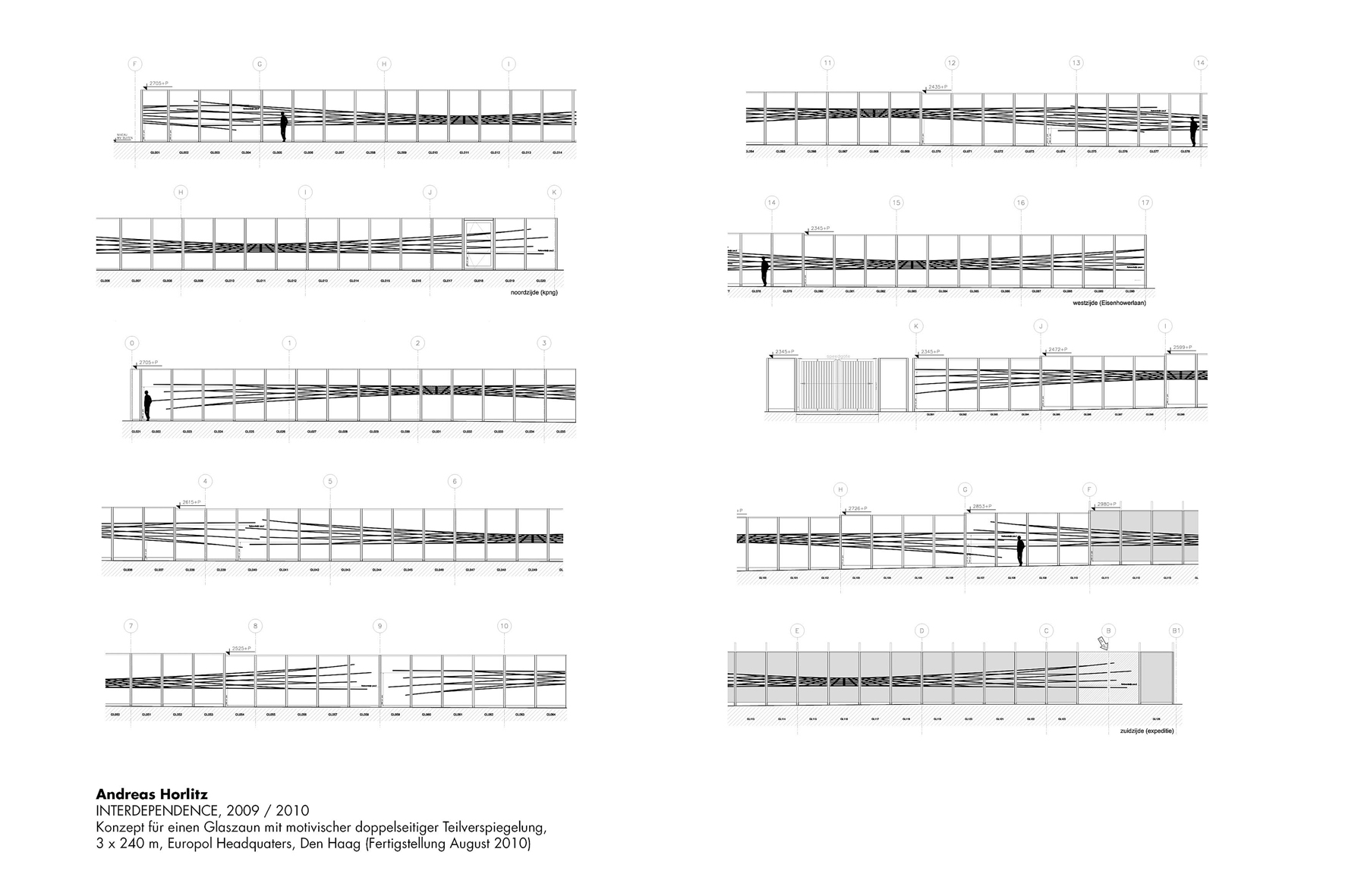 Client: Europol Headquarters in The Hague

Europol Headquarters in The Hague

INTERDEPENDENCE, 2011. In cooperation with Saint Gobain Glass Enterprises, Paris and Gent. From 2009 until 2011, Horlitz implemented his to date most extensive in situ installation: Interdependence. The fence, with a glass expanse of 3 x 250 m, encompasses the building of the Europol Headquarters in The Hague. For the
first time, his artistic approach was determined not by the architectural conditions
of an interior (proportions, doors, windows, lighting, function, furnishings, etc.)
but by the dimensions of a new, complex construction in a public place.

The
partially mirrored glass installation marks the border between inside and outside, between the premises, which can be entered only after security checks, and the urban landscape. However, even though this installation is intended as a barrier,
a protective wall providing security, it is semi-transparent, indeed, even transparent
in some parts. The safety glass is partially covered with a solar protective coating. Depending on the vantage point, it is possible to actually see through the mirror.
In this way, the work emphasises this international institution’s work ethos,
which is based on transparency, communication and cooperation. At eye level,
the fence is accentuated by a fan-shaped or web-like linear mirror pattern that converges and disperses in overlapping repetitions. This structure is reminiscent
of horizons, connecting lines, data streams or bundles of rays. Smaller elements
that loosely allude to EEG curves, micro arrays and GPS localisation complement this structure, however, without compromising is dominance in the big picture.
Seen from afar, especially while driving by, this work seems like a landscape, like a rapidly flowing stream of time or like a accelerated information flow.

However,
viewers pausing in front of the fence will find that the semi-transparent areas, the unexpected glimpses and the mirror pieces reflecting the city create a complex, almost confusing impression. It is hard to make out what exactly is being reflected, and to distinguish the objects at close quarters from those that lie beyond them.
The city, the fence and the building merge in an optical illusion. The stretch of fence being looked at becomes an “optical device”, rather like a kaleidoscope: “state-of-the-art structures of perception can be perceived as a nervous system made up of different media.” Unlike Dan Graham, who, since 1978, has been setting up reflecting or transparent pavilions in artistic contexts that refer to modern glass architecture
and represent a precisely defined area for the exploration of perception and reflection, Horlitz’s work is situated in a public place. Interdependence has not only a functional purpose, it is also an optical device that reflects both the institution and the viewer’s own perception. This concept corresponds with the work’s title, which refers to the interdependence between societies in the international field.