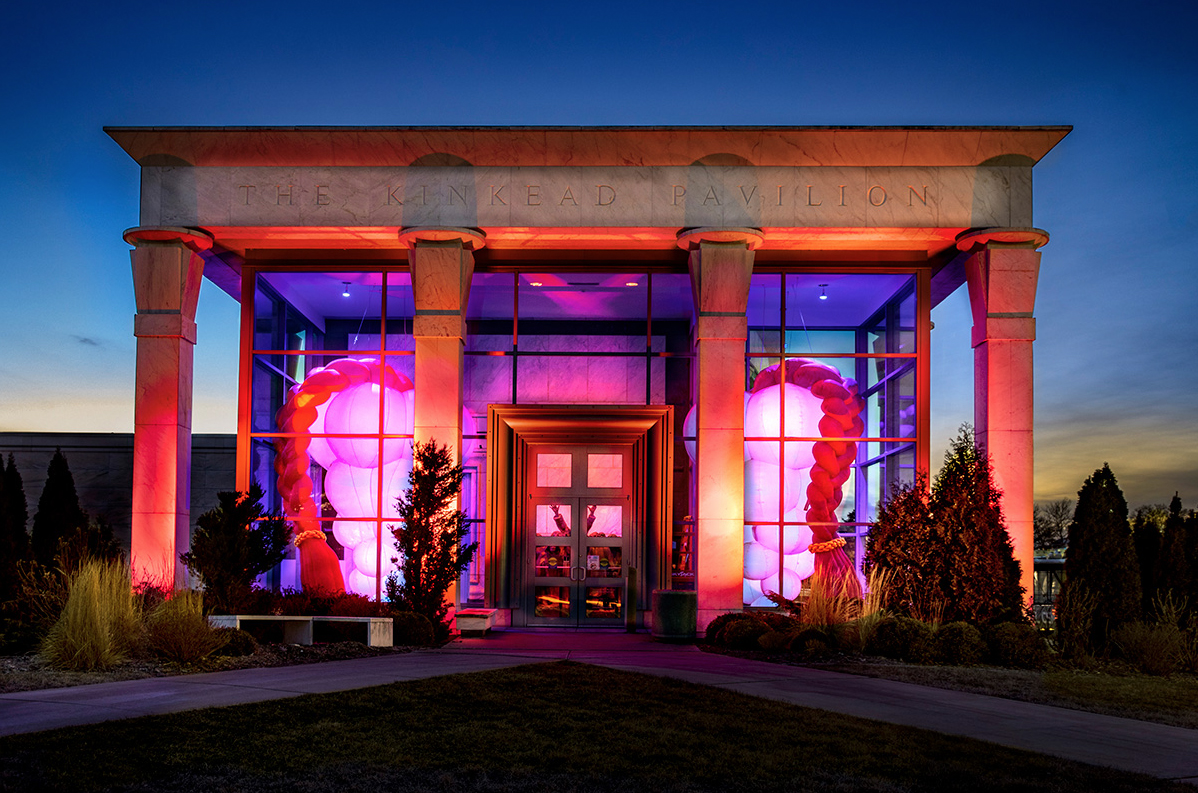 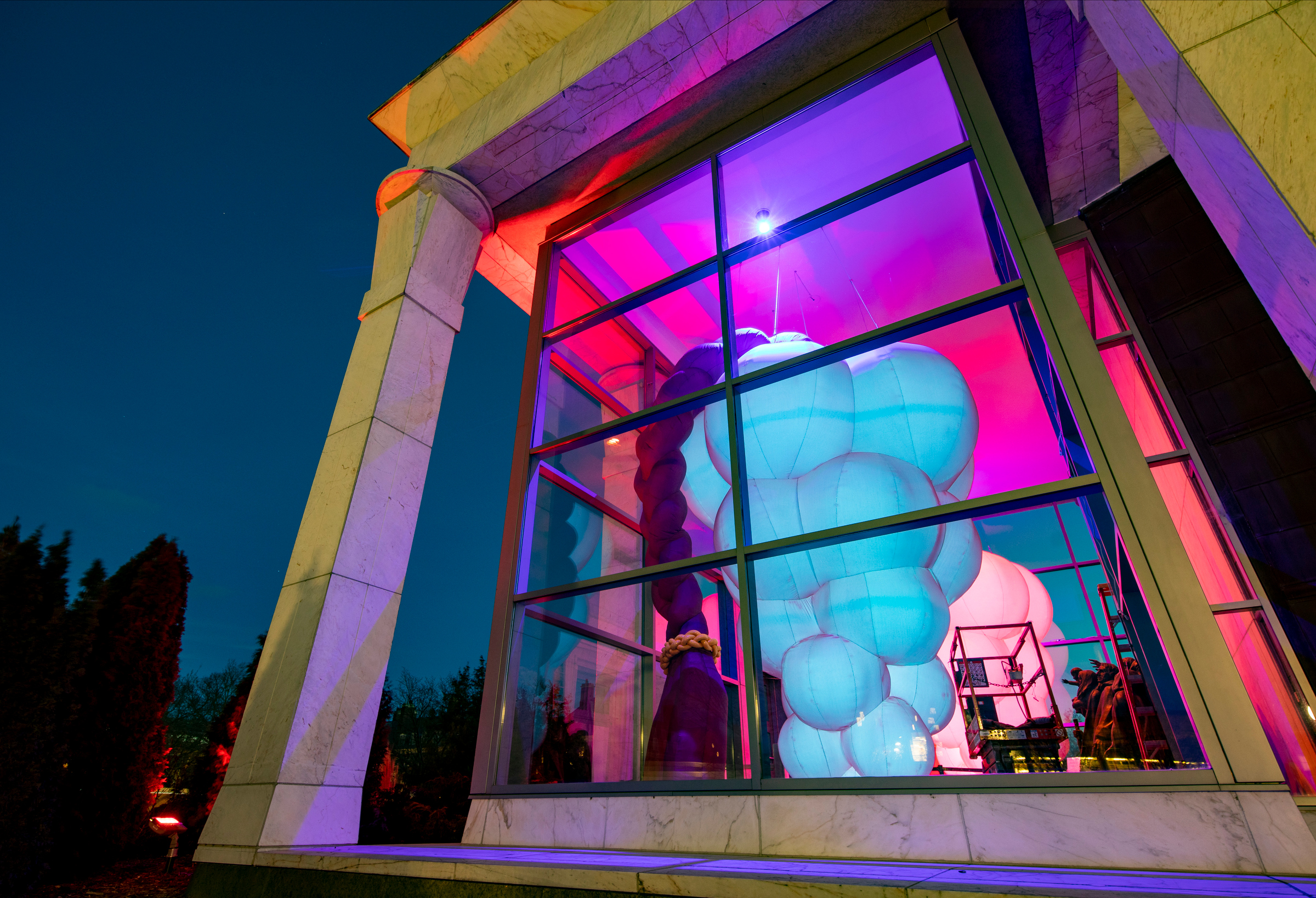 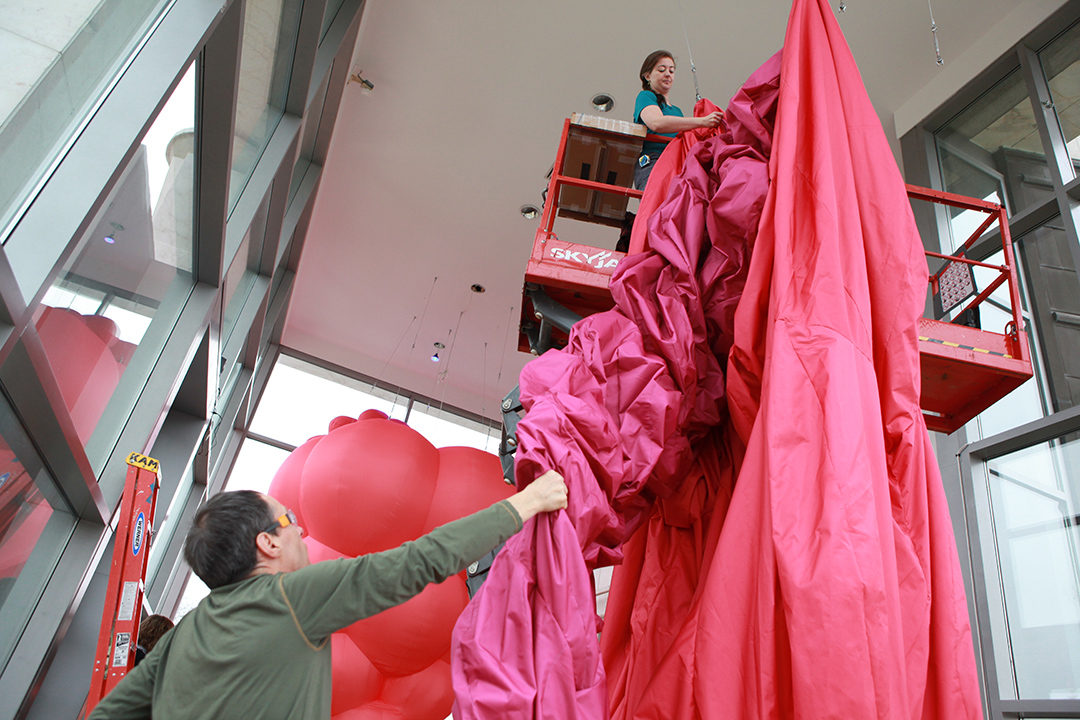 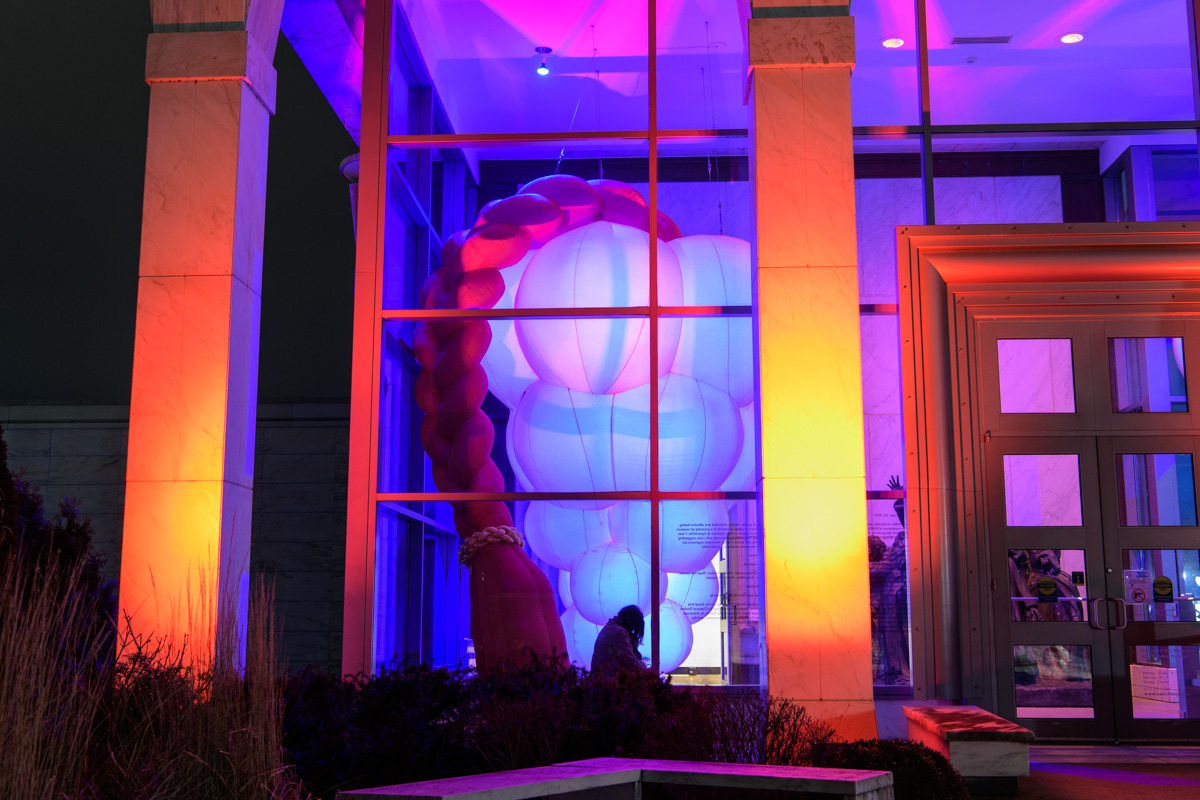 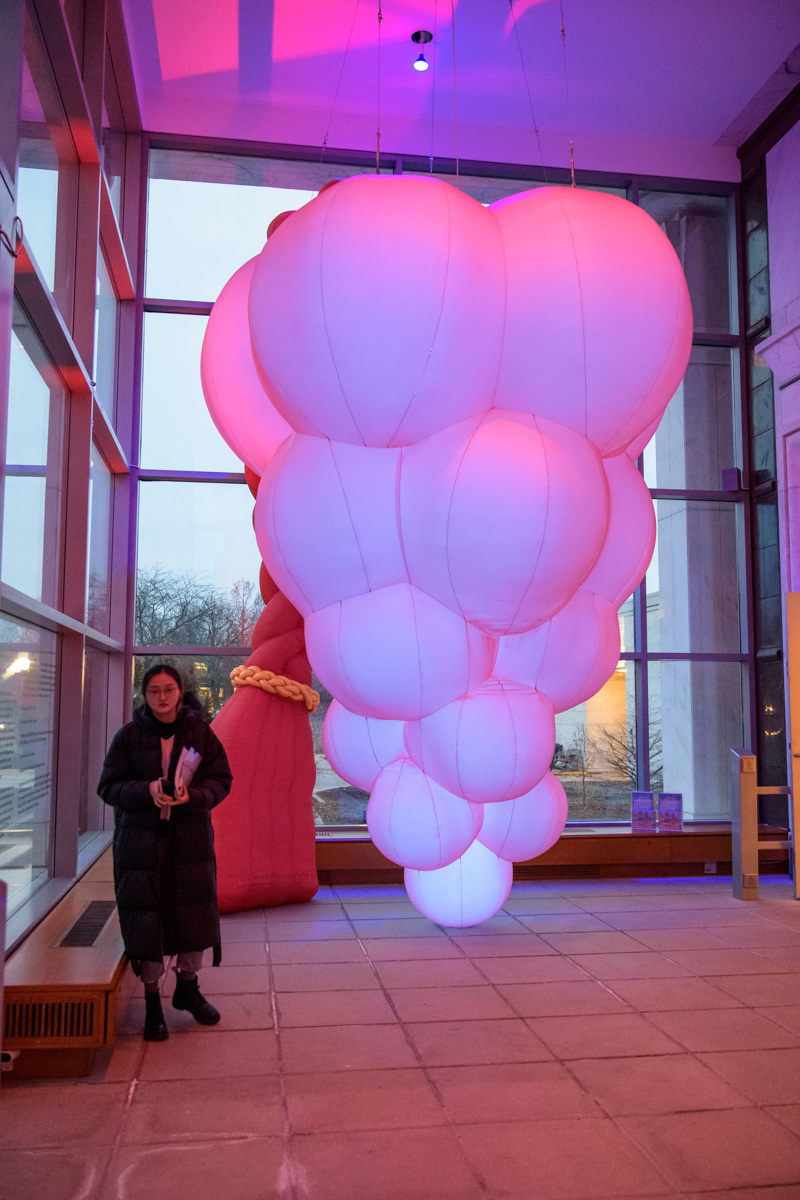 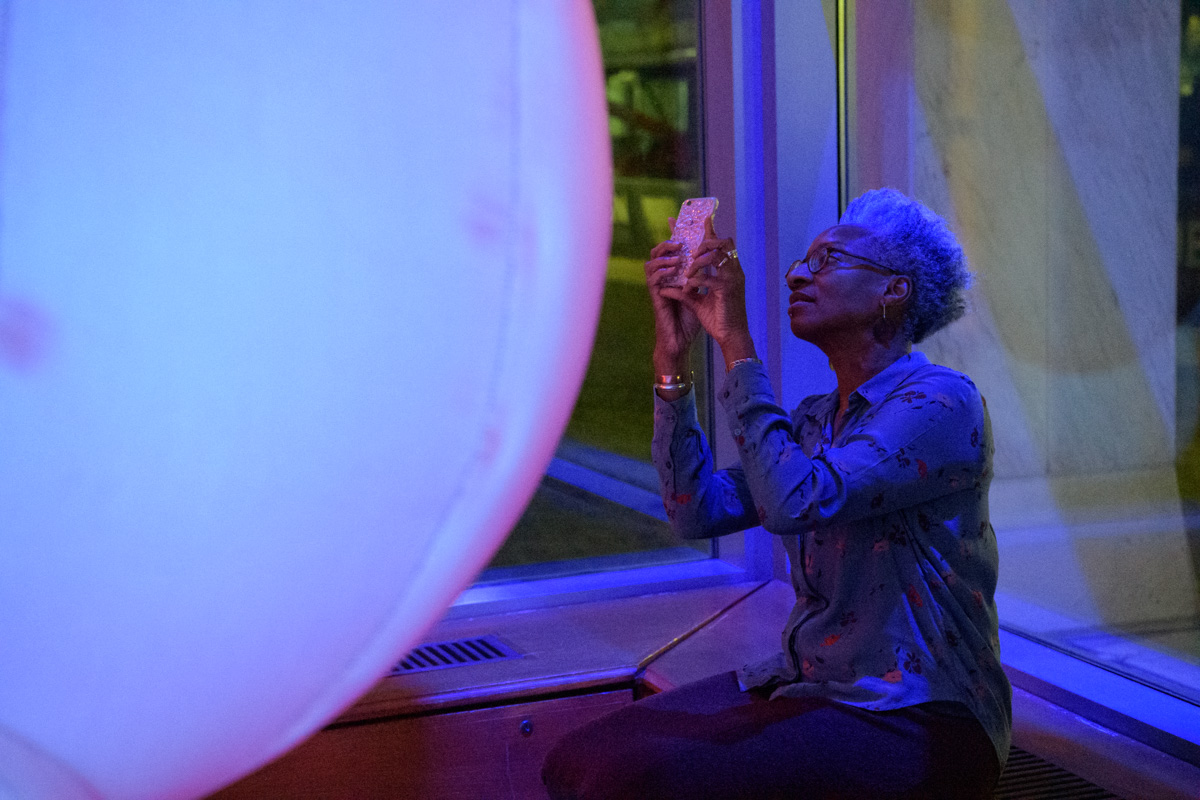 Client: University of Illinois at Champaign-Urbana

Hive, at the Krannert Museum, Champaign Il, uses the glass-enclosed classical portico architecture of the museum to create an installation with two 18’ multi-breasted inflated forms referencing Artemis of Ephesus. An LED lighting program inside each sculpture evinces a dialogue between the two sisters in light and color. Think of the acropolis at twilight mixed with code and signals. The LED light program runs 24/7. Light from inside the sculptures subtly pulses during the day and slowly becomes more visible as twilight approaches. The pavilion is illuminated inside and out with dramatic lighting. Hive is a site-specific installation and a public artwork. I collaborated with Lakshmi Ramgopal, a sound artist, producing sounds referencing breathing, whispering, and sighs that permeate the space. 2020-2021, electronic wiring, blowers, wire, weights, Pi computer.

The sculptures are also modeled after the “porch of the Maidens” at Chicago’s Museum of Science and Industry, referencing the female figures or caryatids at the Acropolis in Athens, Greece. Thick braids down the back of each figure increase the structural support. “Hive” features a thick braid emerging from the top of each sculpture and reaching the floor. The braid transforms the sculptures into figures.

The goal was to integrate the ancient and modern in the context of the museum space. Hive is in the Kinkead Pavilion, an addition from 1988. The original museum building, completed in 1961, is in the style of Mies van der Rohe. The pavilion, a post-modern structure, references ancient porticos and the museum as a temple. This cultural mixing of different architectural styles establishes a dialogue about the fusing of ancient and modern. Using traditional scale and placement of monuments in architecture, Hive’s inflated temporary bodies question the need to continue the tradition of permanent monuments.  The architecture of the pavilion is disrupted by comically abundant, erotic body forms using iconic elements from ancient objects, joined to create new hybrid creatures both goddess and maiden.
Lighting Goal

A photograph of the Porch of the Maidens at the Acropolis at twilight inspired my choice for color wash lighting inside and outside the portico. I wanted to emphasize liminal time, the time between day and night. Conceptually this site/time of transition underscores the concept of the portico as a threshold or transitional space.

Sound Collaborator
The sound of the blowers that inflate Hive is a necessary function of a cold air inflatable. The blower sound can be used to create a soundscape emphasizing the concept of breath while building in ambient sounds to focus attention on the aliveness of the giant forms. The sounds were created in a collaboration with Lakshmi Ramgopal, a sound artist, recording a number of vocalists from along the feminized spectrum of identity, producing sounds referencing breathing, whispering, and sighing that permeates the space. The blowing sounds made by the ventilation system in the exhibition space influenced Ramgopal to think about breathing in a medical context, such as a person on a ventilator.

Content Collaborator
Classics professor Clara Bosak-Schroeder at the University of Il joined the project as a curator. She wanted to engage with art that would invite audiences to reimagine the ancient world and reflect on issues of gender, identity, and religion.

Lighting Design Collaborator
I worked with Niles Fromm, a lighting code designer. The sculptures communicate with each other through a series of color and light sequences inspired by “Close Encounters of a Third Kind,” suggesting an extra-celestial Morse code.

EXPLORING SOCIAL SPACE Being inside the pavilion with Hive invites the participants to explore the multi-sensory experience. The light display and sound temporarily fill the body and mind with a moment-to-moment experience. The crowding of the space with two enormous sculptures gives the visitors empirical knowledge of touch and haptic pleasure as they move around the installation. I was planning to collaborate with Della Perone, a photographer. Our community-based photo project included inviting people of all ages to join us in the pavilion, using photography to capture their experiences, then sharing the photographs with the community. Covid put a halt to further explorations of the social space. I will explore this area in the future.