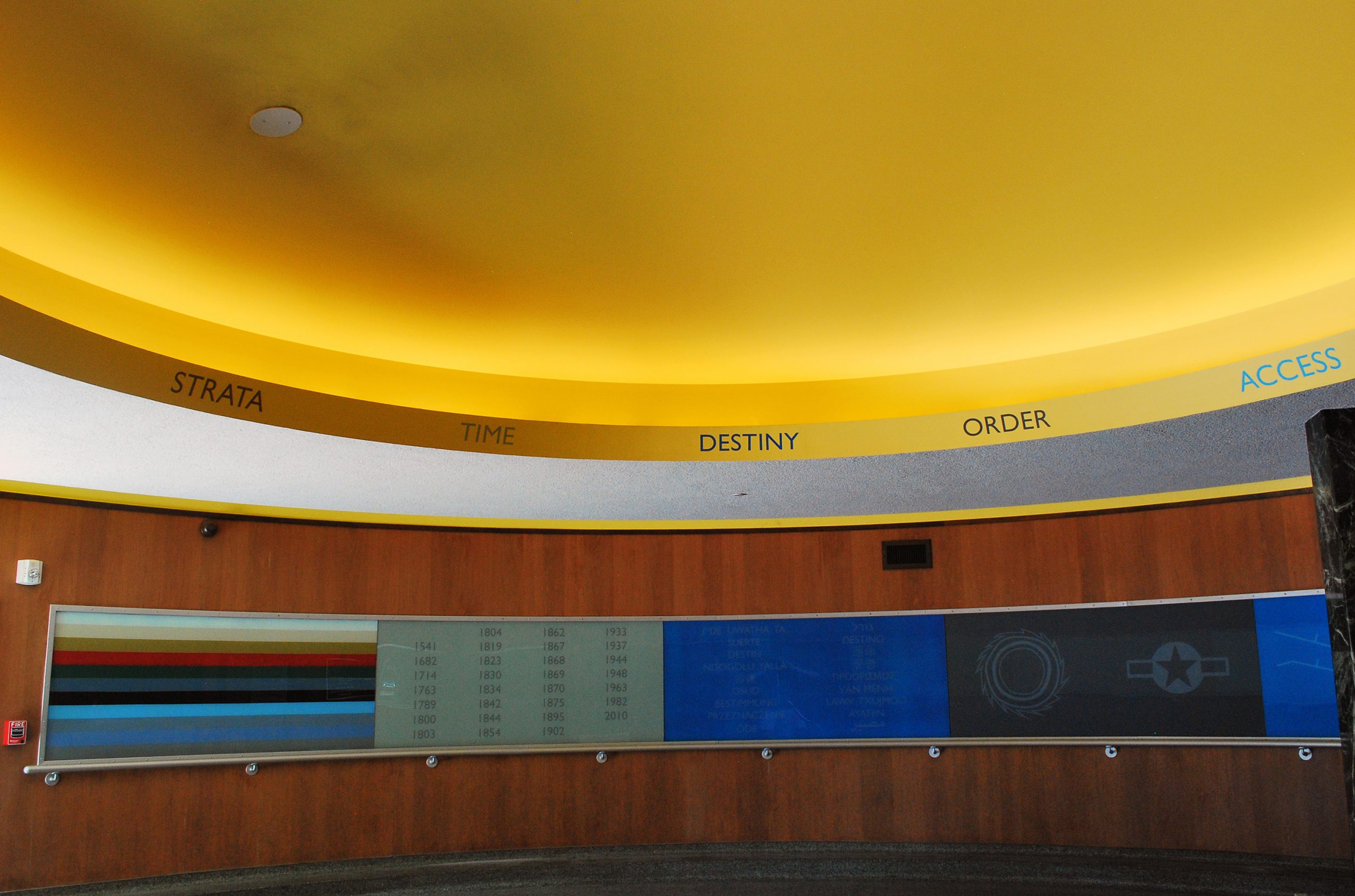 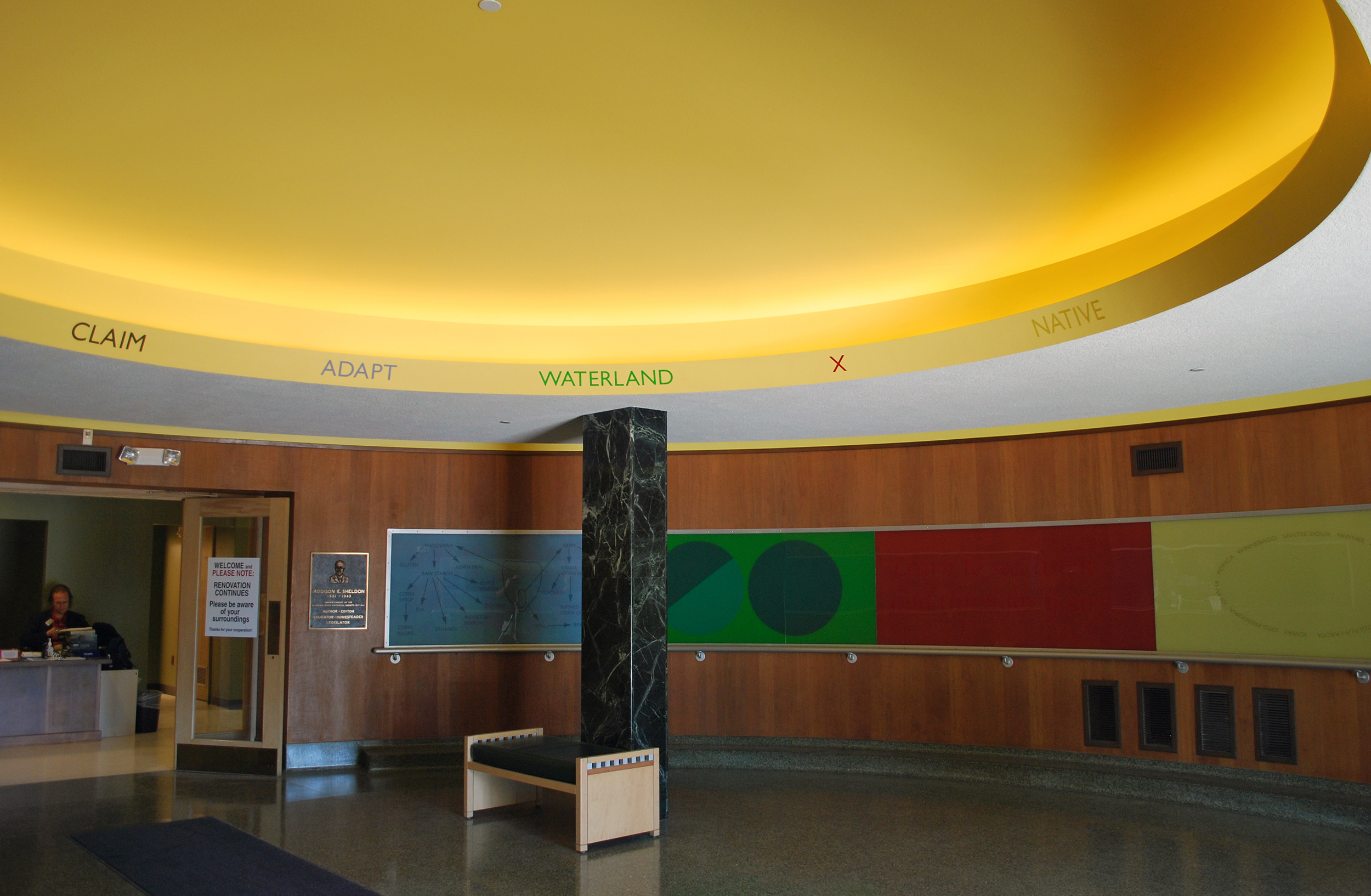 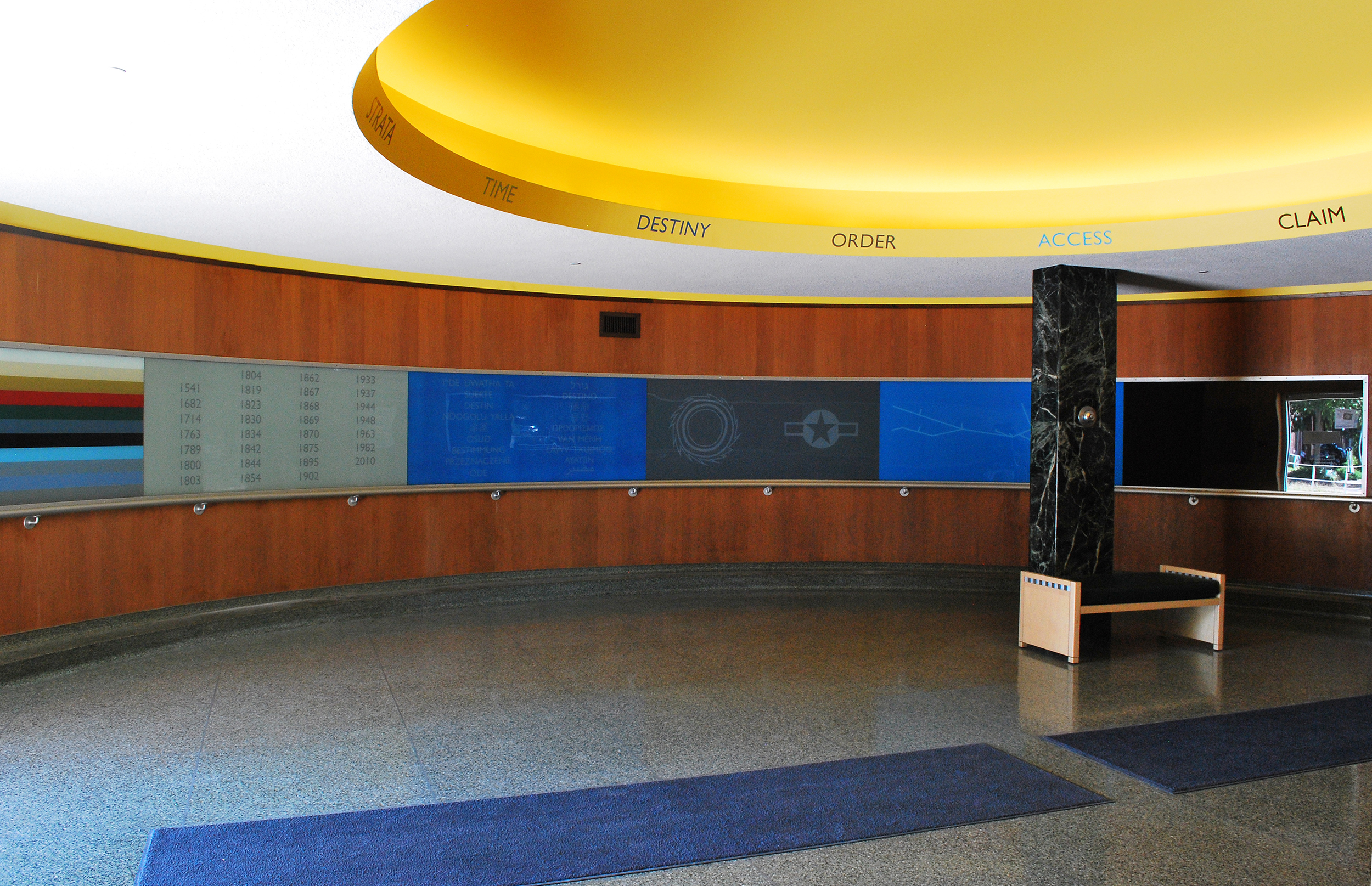 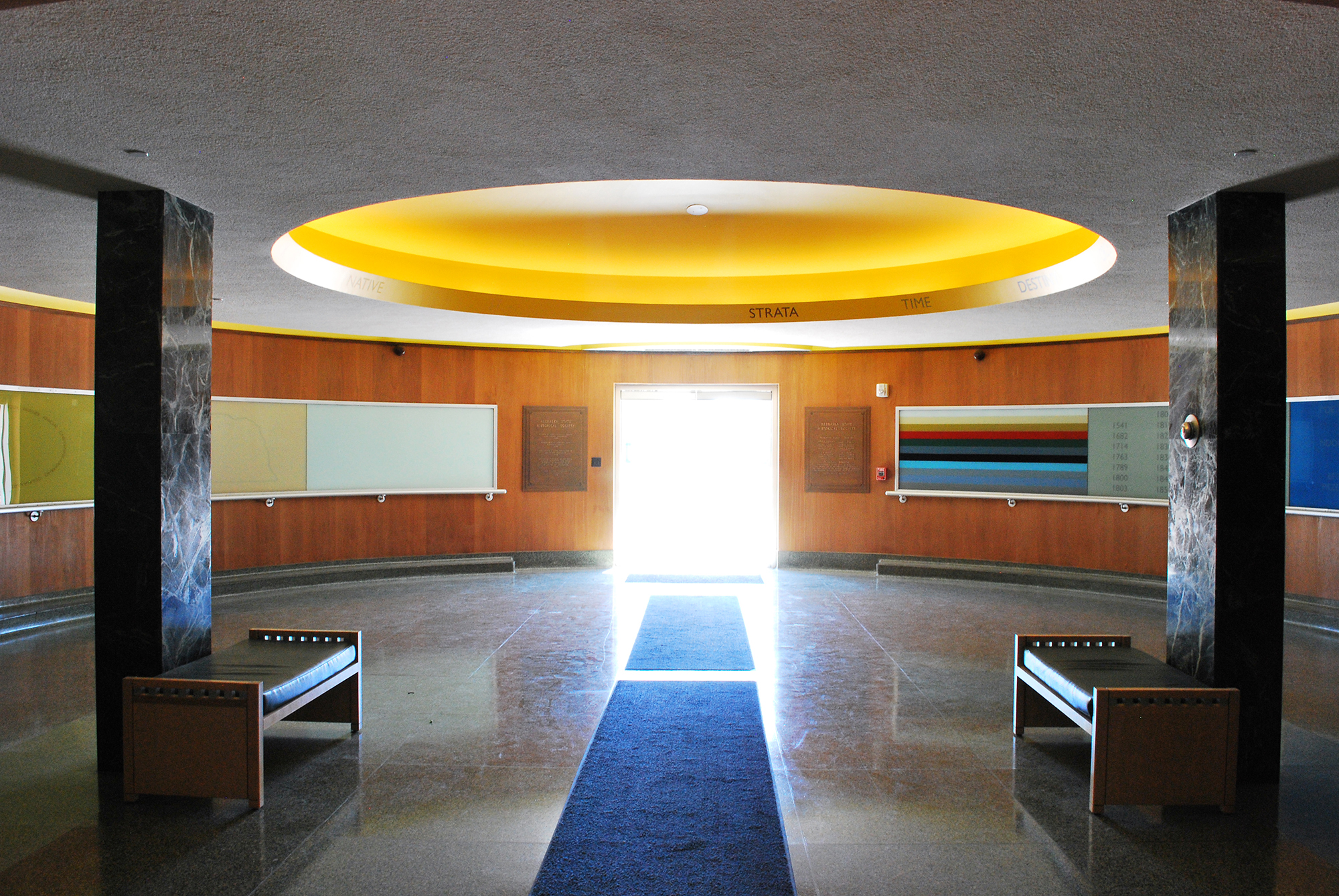 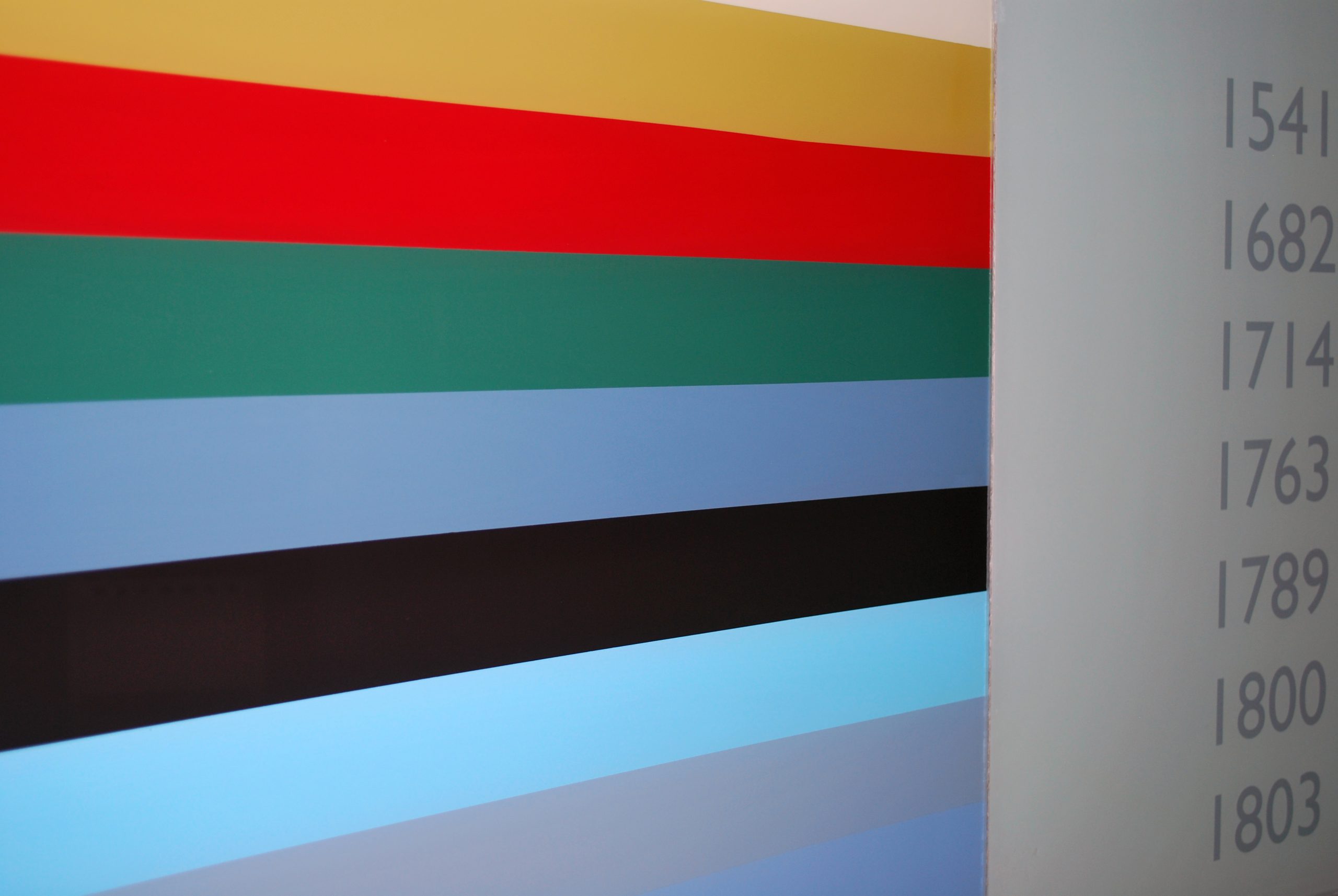 Industry of the Ordinary

Industry of the Ordinary

What person, object or idea best represents the history of Nebraska?

During the summer of 2010, Industry of the Ordinary set out to create a portrait of the State of Nebraska to be permanently installed in the rotunda of the Nebraska State Historical Society. At the heart of this endeavor was a series of road trips around the state to interview as broad a range of the citizenry as possible. Thousands of miles were driven, dozens of towns were visited and countless people contributed their thoughts. The question posed to all whom we encountered was simple: ‘what person, object or idea most represents Nebraska to you?’

After several months of information collection, both through the aforementioned interviews and through the artists’ direct research, the process of distilling this data began. IOTO set themselves the task of reducing the material down to twelve discreet designs for the glass panels that surround the rotunda.

As these decisions were made, the photographs that had been taken throughout our journeys provided the color choices for the information that would be presented, and single words were chosen to accompany each panel – these would be painted on the interior lip of the rotunda. Color-coding acts as an additional clue to the relationship of image, text and idea.

The modernist architecture of the building that houses the Nebraska State Historical Society was the primary and overarching consideration in the formal organization of our installation. The piece was embedded into the existing structure, but we also worked with the staff of the Historical Society to reinstate the original lighting plan, in order to fully realize the intents of the architect, Ellery Davis.

Particular recognition goes to Lynne Ireland, then the Deputy Director of the Nebraska State Historical Society, for her essential partnership in the conception and development of the project, and for her unwavering advocacy on behalf of our ideas.

Principally, our thanks go to the many Nebraskans to whom we talked over the course of the spring and summer of 2010, from one end of the state to the other. Without their candid, insightful and often contradictory perspectives on the state and its history, this project would not have been possible.

Our view of history is that it is not reducible down to a series of “facts.” It is not objective. It is never comprehensive. Many voices are necessarily left out in the re-telling of any historical narrative. It is a rich maelstrom of competing views in much the same way that art is. The role of art is not to make a series of statements, but to engage dialogue. Industry of the Ordinary intend this work to engage in a dialogue about history in general terms and Nebraskan history more specifically. It does not need to reproduce the job already successfully undertaken by the Historical Society and its museum or, indeed, any other institution or collection that celebrates the history of Nebraska.