Hatched: Breaking Through the Silence - CODAworx 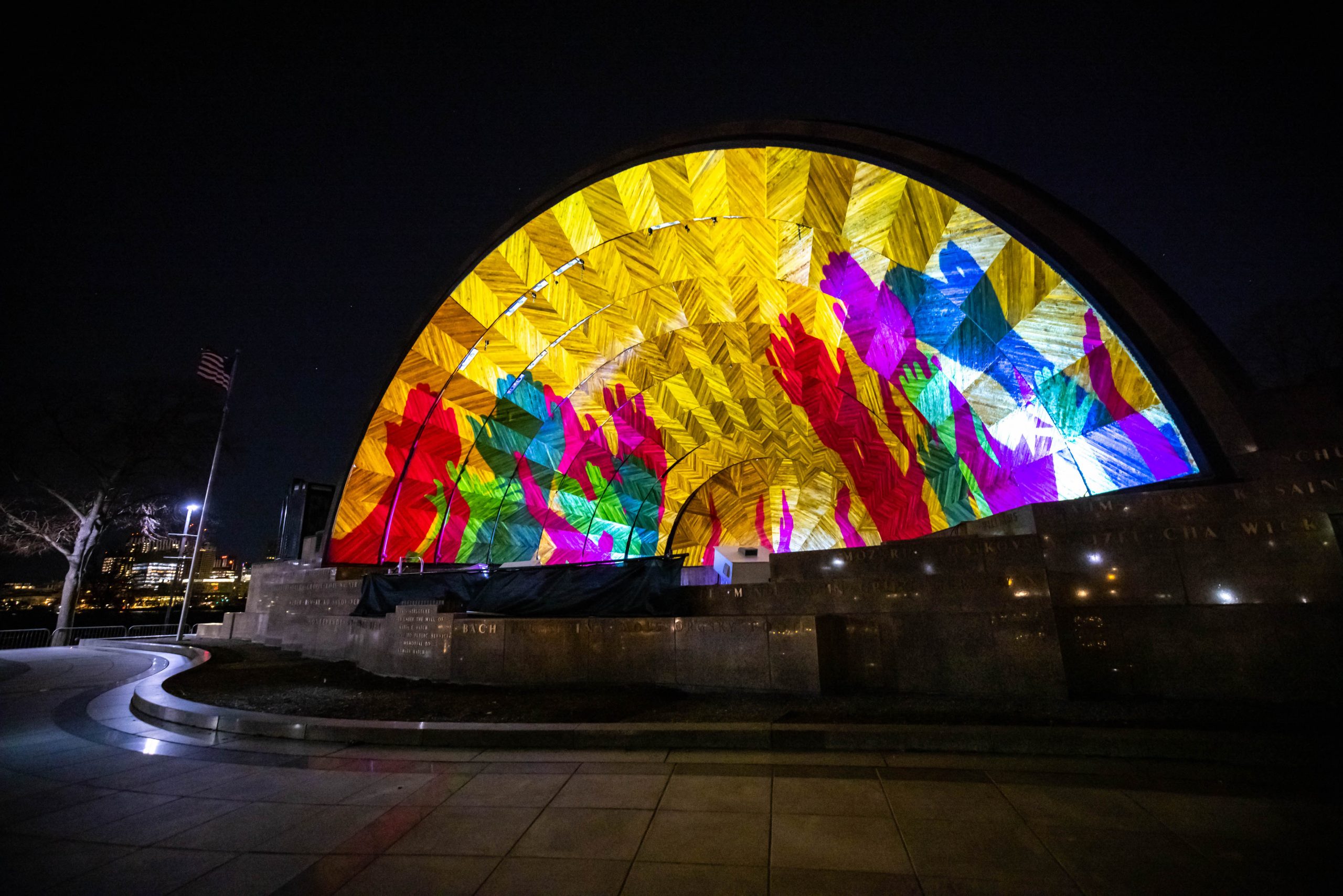 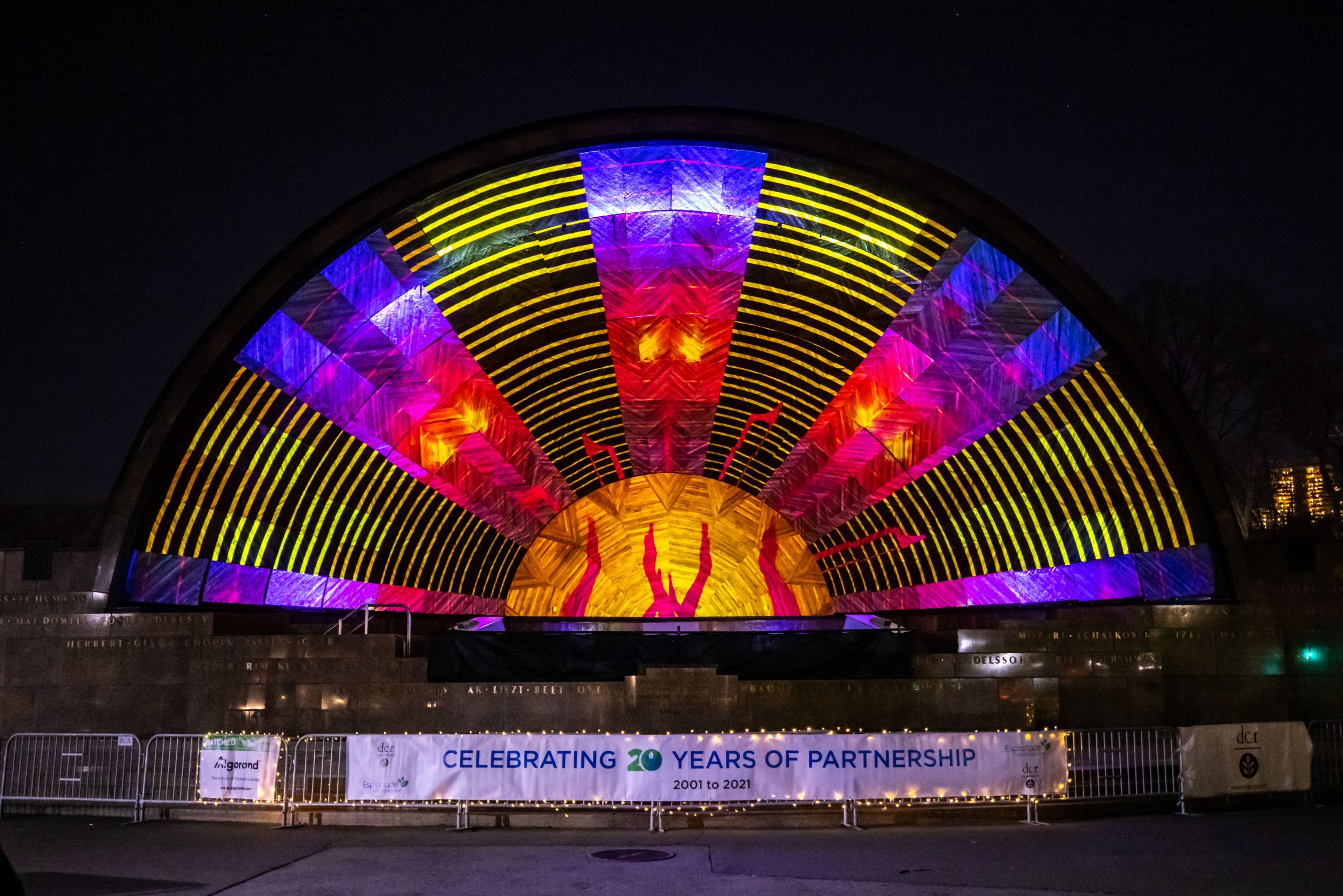 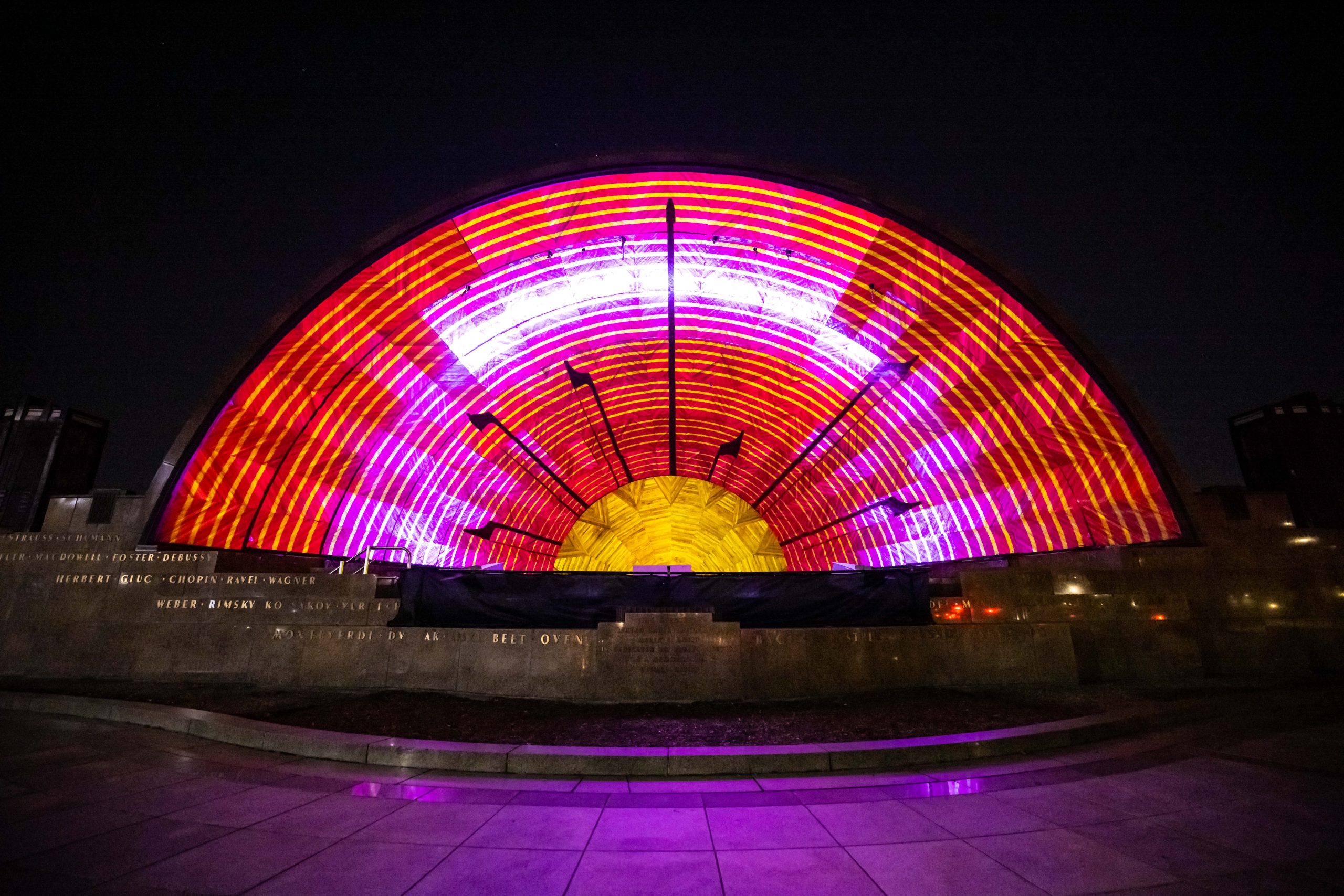 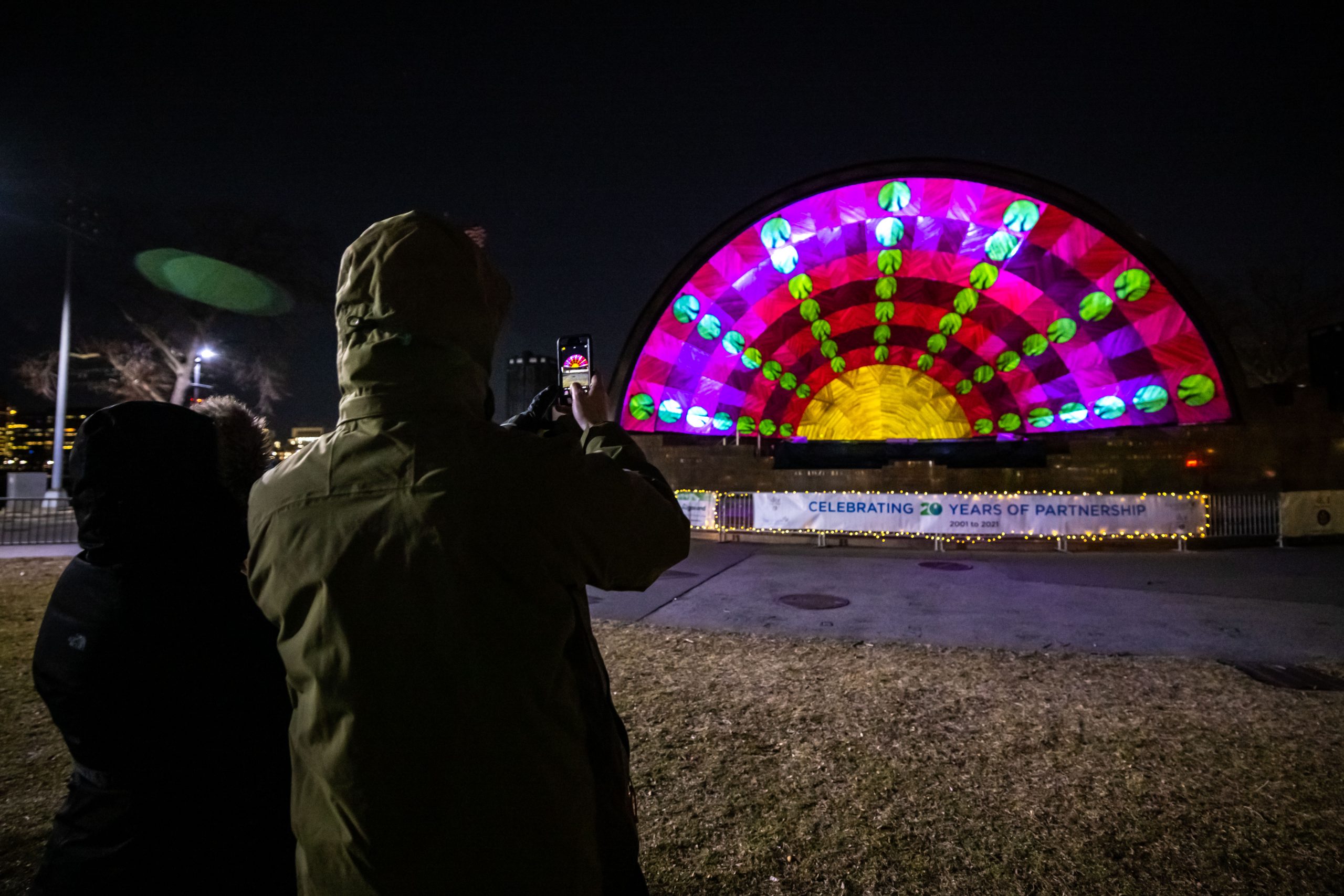 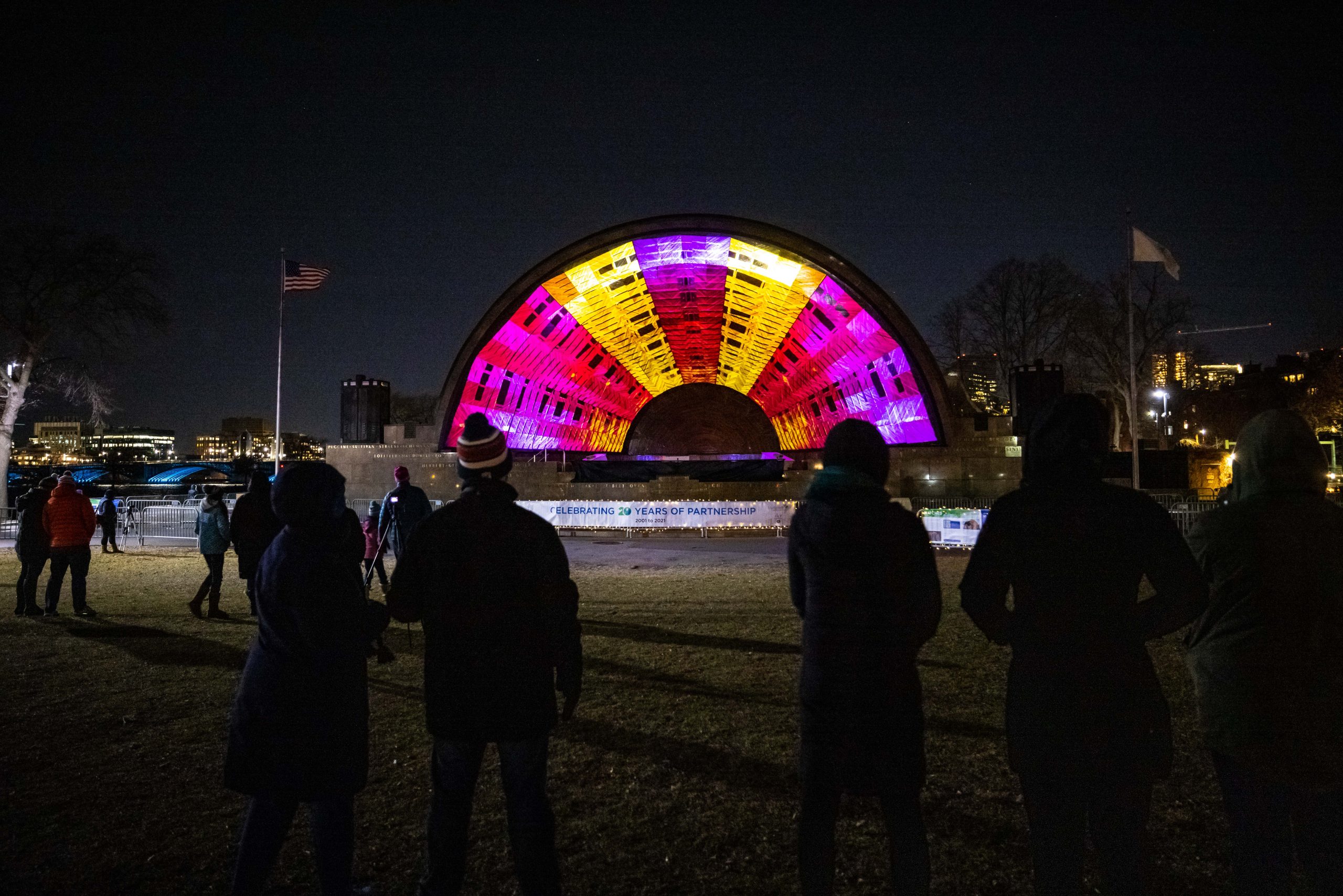 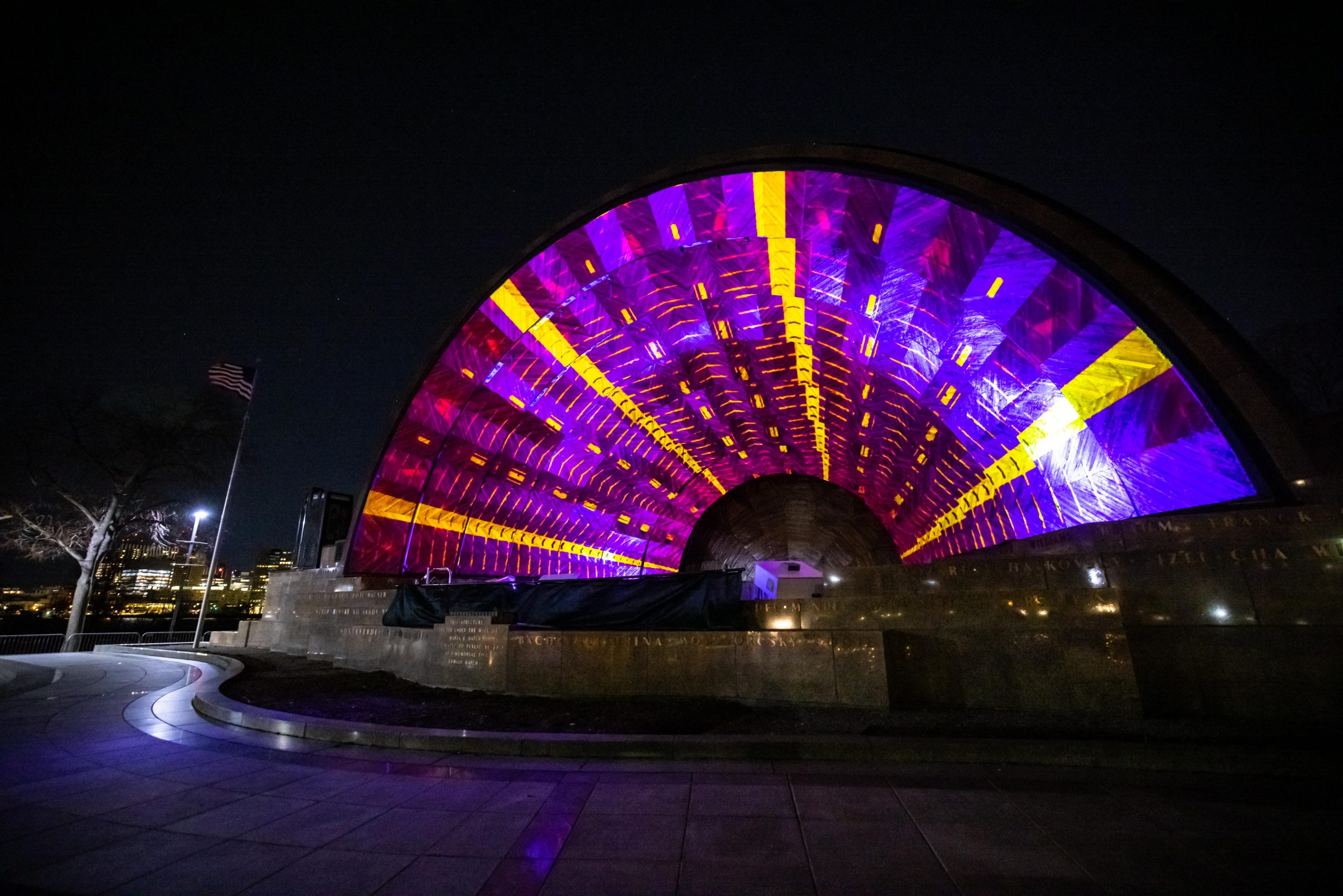 Hatched: Breaking through the Silence was a multi-week illumination and sound experience created to mark the 20th Anniversary of the Esplanade Association’s successful public-private partnership with the Massachusetts Department of Conservation and Recreation (DCR). The four week installation was a family-friendly and physically-distant celebration at Boston Massachusetts’ famed Hatch Memorial Shell. It featured an original 15-minute visual and sound score created and led by Boston-based creative Maria Finkelmeier of MF Dynamics, shaped specifically for the 80-year-old amphitheater itself.

The projection-mapped visuals for Hatched celebrated the many sounds that Hatch Memorial Shell performers have expressed over the facility’s impressive musical history. The work featured geometric shapes of musical instruments as kaleidoscope pieces, human hands magically clapping on the surface itself, and colorful animations accentuating the Shell’s Art Deco form – all set to new music composed by Finkelmeier and recorded by local musicians. Featuring a team of predominantly female-identifying artists and directors, Hatched brought to light a balanced pedestal, an opportunity for underrepresented communities to “break through” and share their skills, vision, and voice.

Hatched was designed and created specifically for the shape, history, and vision of Boston’s Hatch Memorial Shell, and in celebration of the Esplanade Association's 150th Anniversary. It was integral that narrative and content was inspired by and derived from the place and the community. Similarly, the content was designed specifically for the arches of the amphitheatre, and projection mapped onsite. MF Dynamics was commissioned by the Esplanade Association to create the original artwork, which is not to be replicated at other sites. The joy, reflection and celebration that the work inspired was also influenced by the timing of the presentation, at the onset of 2021, as the pandemic continued to cast a shadow over society, but hope filled our community.

The Esplanade Association solicited several bids from New England based artists and production companies for their vision to “illuminate” the Hatch Shell, bringing light to a dark winter and year. MF Dynamics submitted a proposal, outlining a vision to create a vibrant music and projection work that celebrated the amphitheater’s rich musical history, while propelling it forward with contemporary sounds, technology, and design. The project was managed by the Esplanade Association, in collaboration with Massachusetts’ Department of Recreation and Conservation. These leading parties organized permitting, electricity, safety, and access to the space for the MF Dynamics team. Project partner, LuminArtz, connected with Epson America to donate the three 15,000 lumen projectors used to illuminate the shell. MF Dynamics created the content, designed the stage plot, built the temperature controlled housing system, and installed and monitored the work. Several financial sponsors and supporters were solicited by the Esplanade Association to make the project possible.