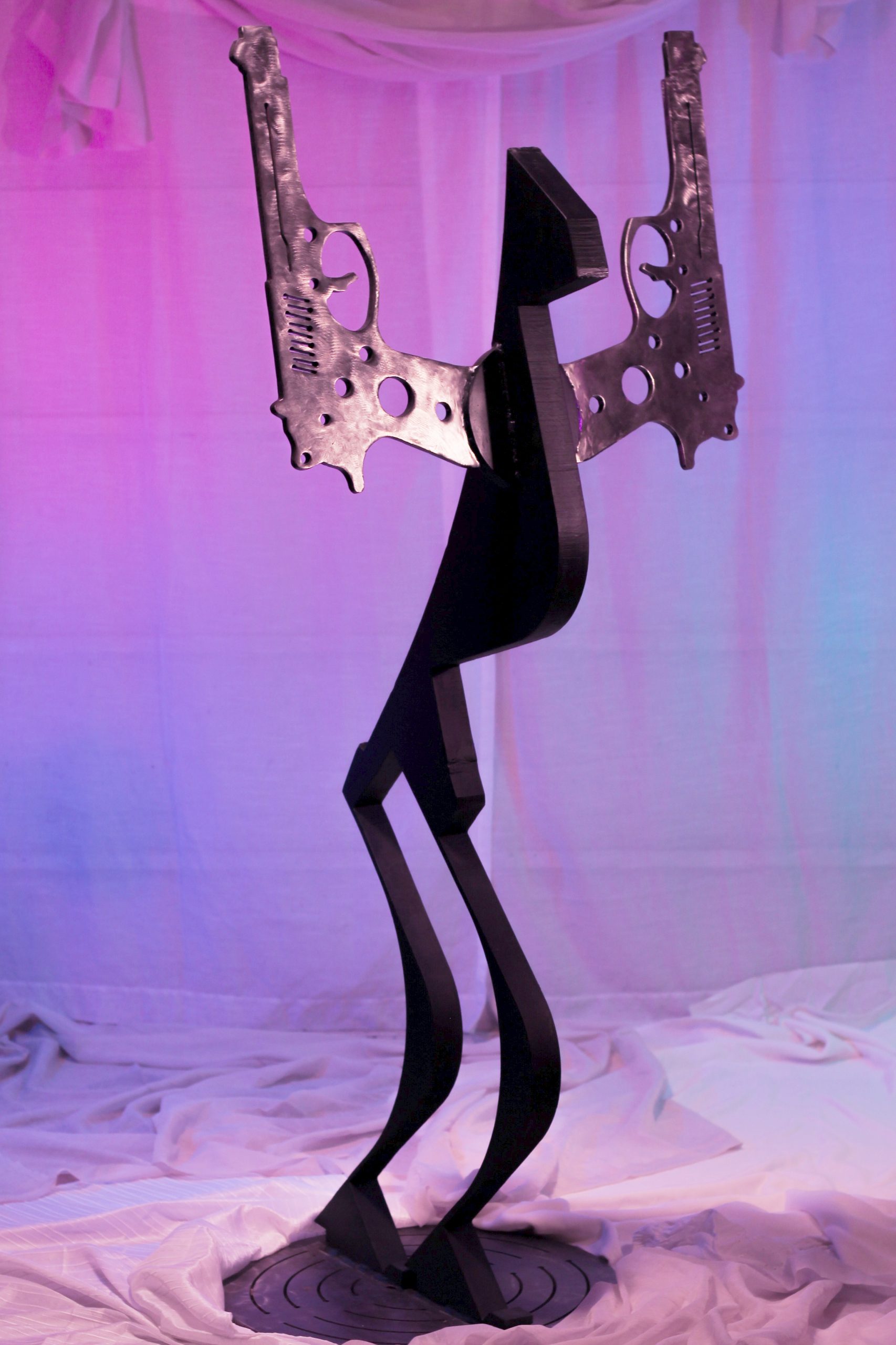 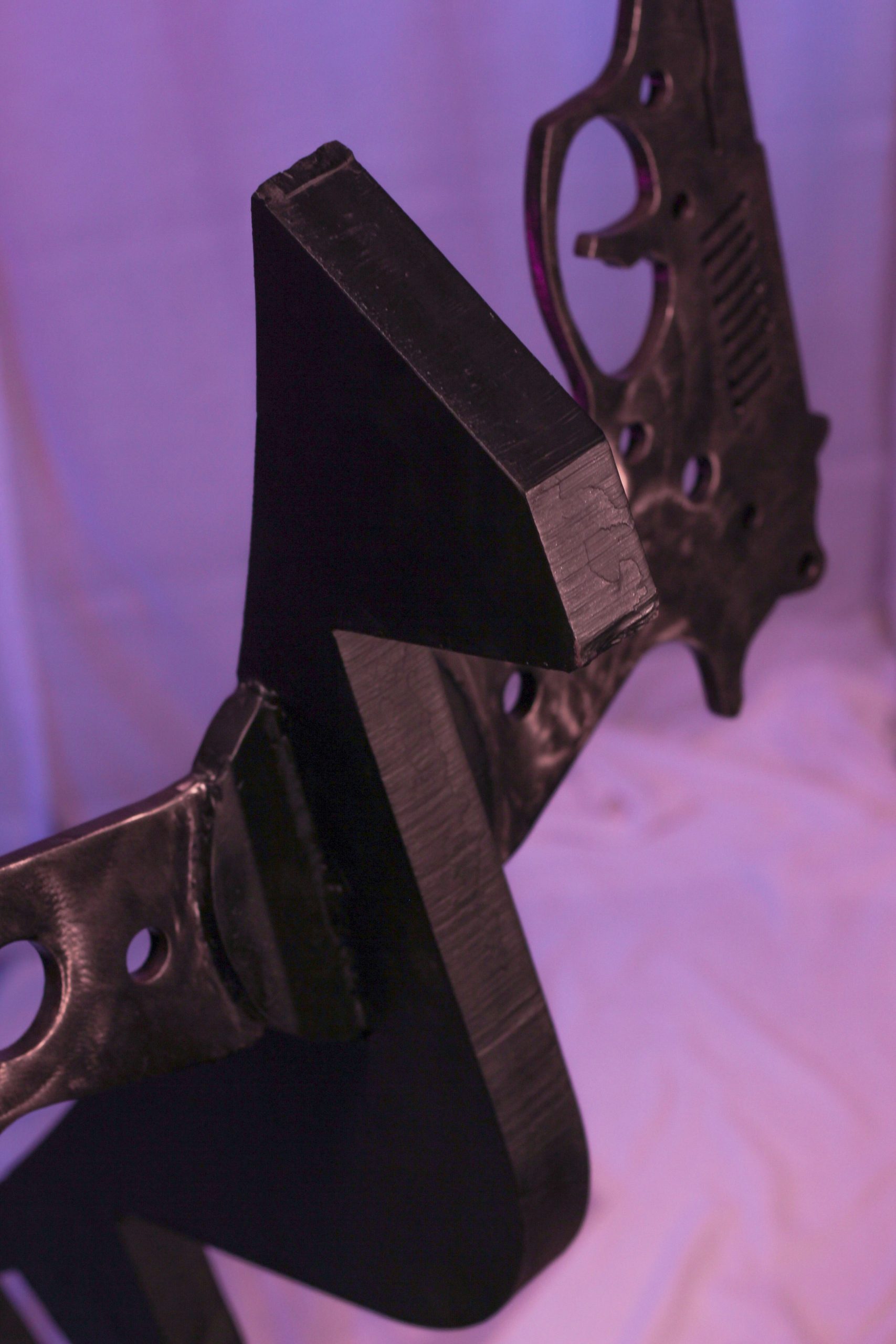 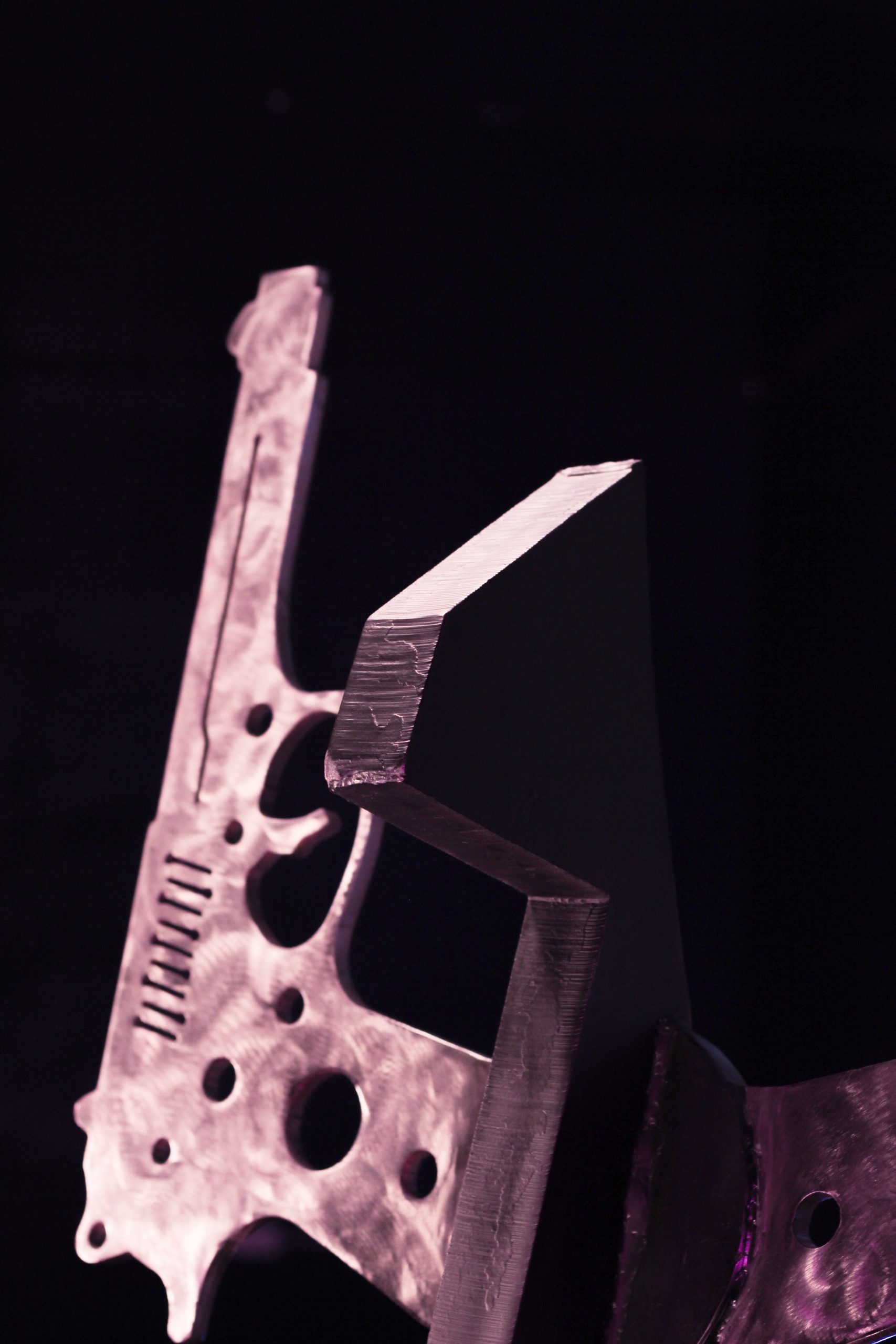 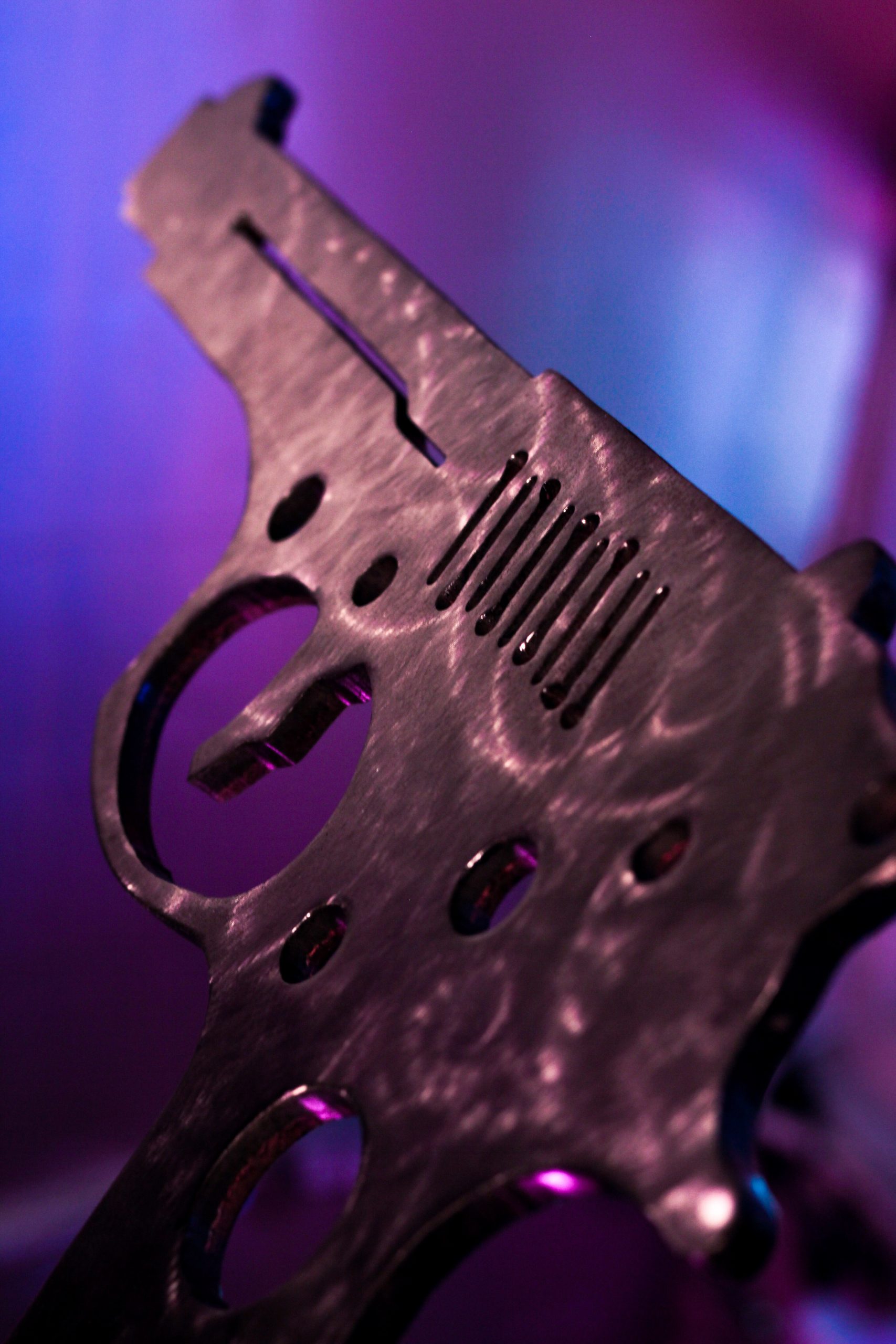 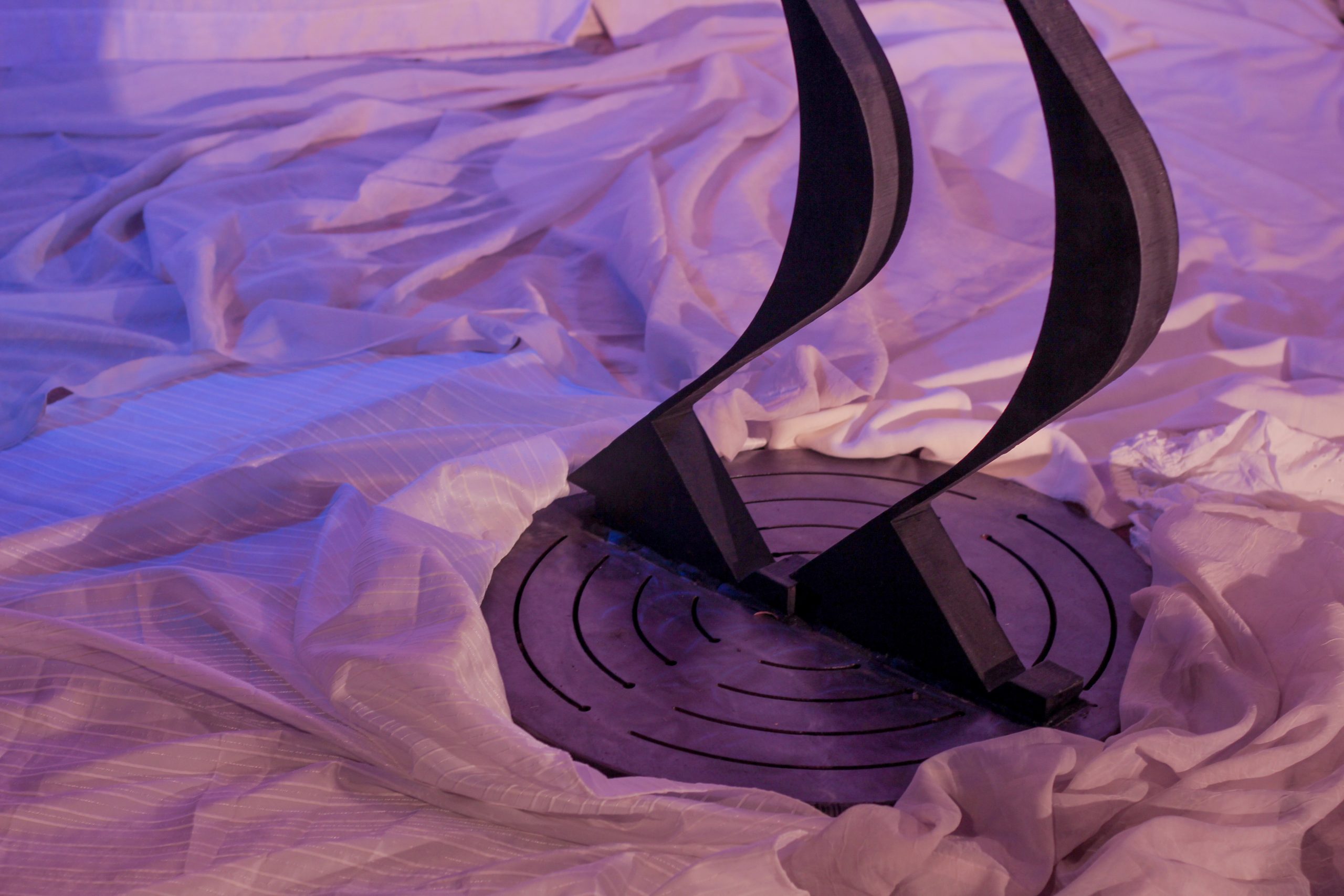 “Are guns toys or tools? Sport or Weapon? Is it truly a civil right or is it a criminal possession? The confusion is lethal.” This was the theme for The Deadly Ambiguity of Guns art show, which took place at The New Orleans Art Center. The life size carbon steel sculpture,which stands over five feet tall, has been on display in both New Orleans and Baton Rouge Louisiana, courtesy of Mark Gonzalez.

Uncertainty causes anxiety in all of us. In tense situations, this anxiety can cloud
our perceptions, and wreak havoc on our minds. Does he have a gun? Or doesn’t
he have a gun? Or better yet, does he think I have a gun? In ​Hands Up, Don’t
Shoot​, I turn the ambiguity of that moment into the focal point of the piece.

How can I capture “uncertainty’ in human form? I chose to focus upon the
surrender pose, which also happens to be a sign of protest. I utilized a 2” thick
carbon steel drop, which abstractly resembles a human figure. By replacing the
arms with guns, I can envision the anxiety black Americans feel when confronted
by this situation and surrounding stereotypes. In a culture based on white
supremacy, black skin is seen as a danger despite evidence to the contrary in terms
of actual crime statistics and recent shootings of unarmed black citizens. Even
when hands are up, many black Americans are perceived as a threat. Even when
hands are up, I believe many black Americans don’t feel safe. It is within this
moment of doubt and ambiguity that death becomes all the more plausible; thus
transitioning the guns into angel’s wings.