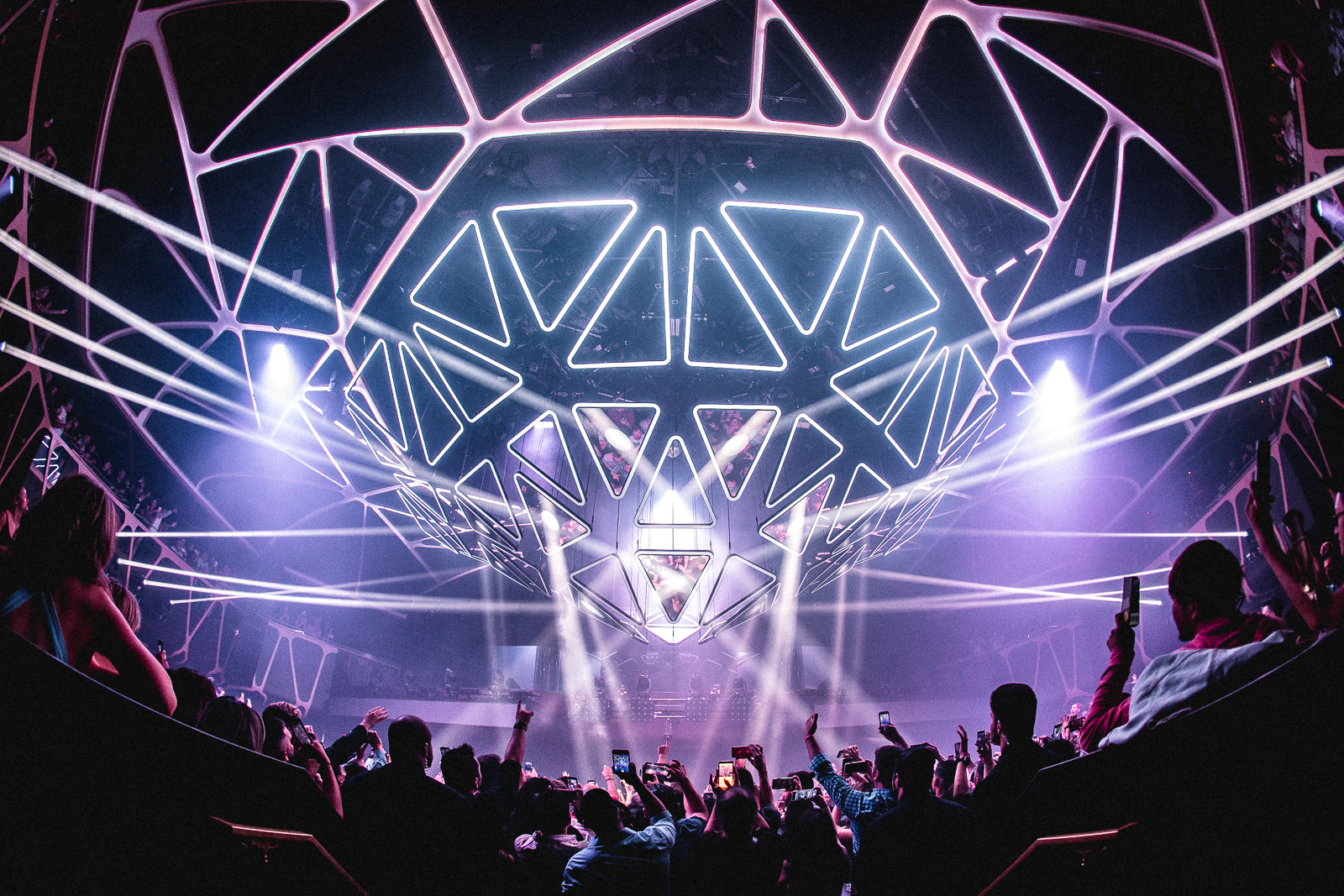 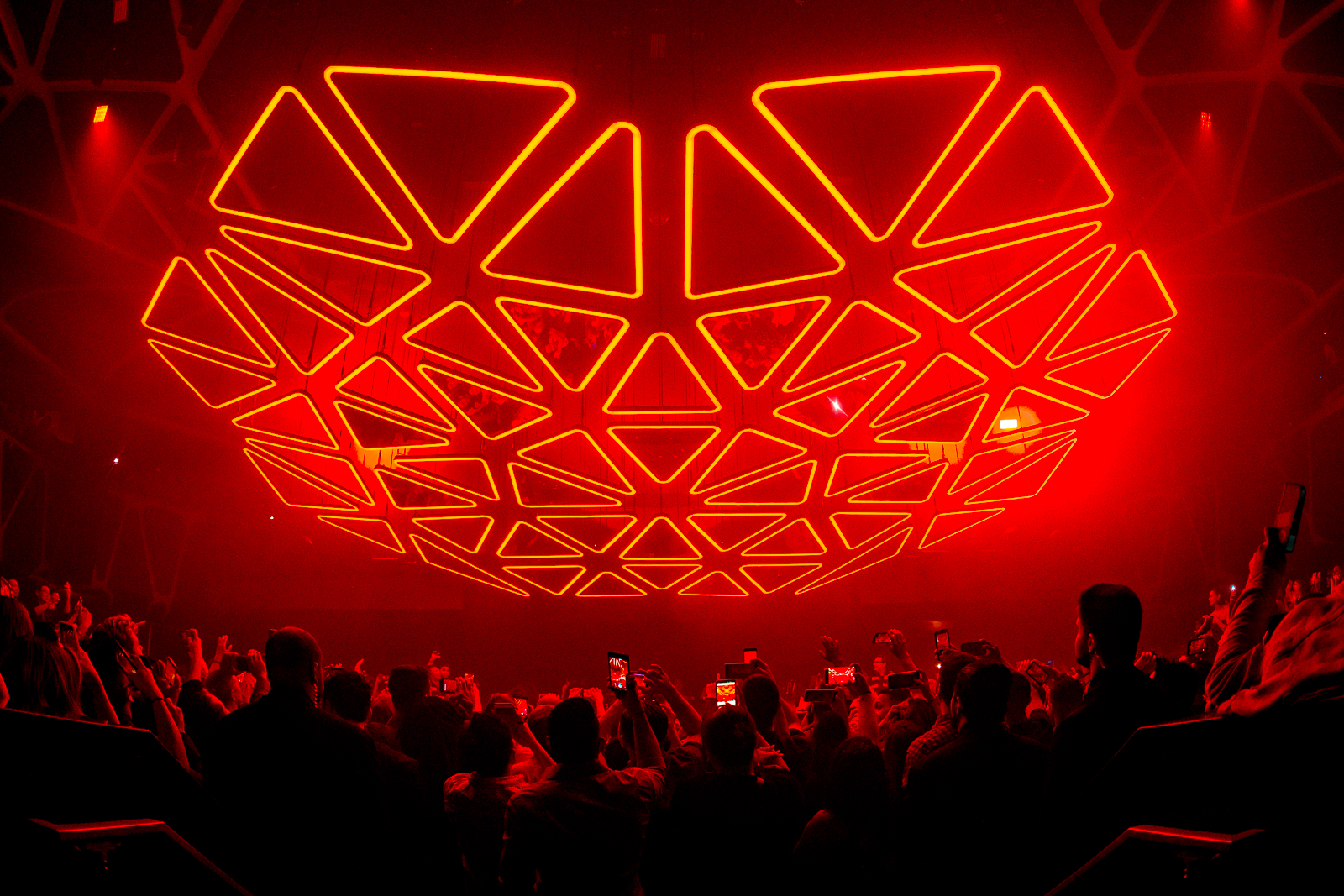 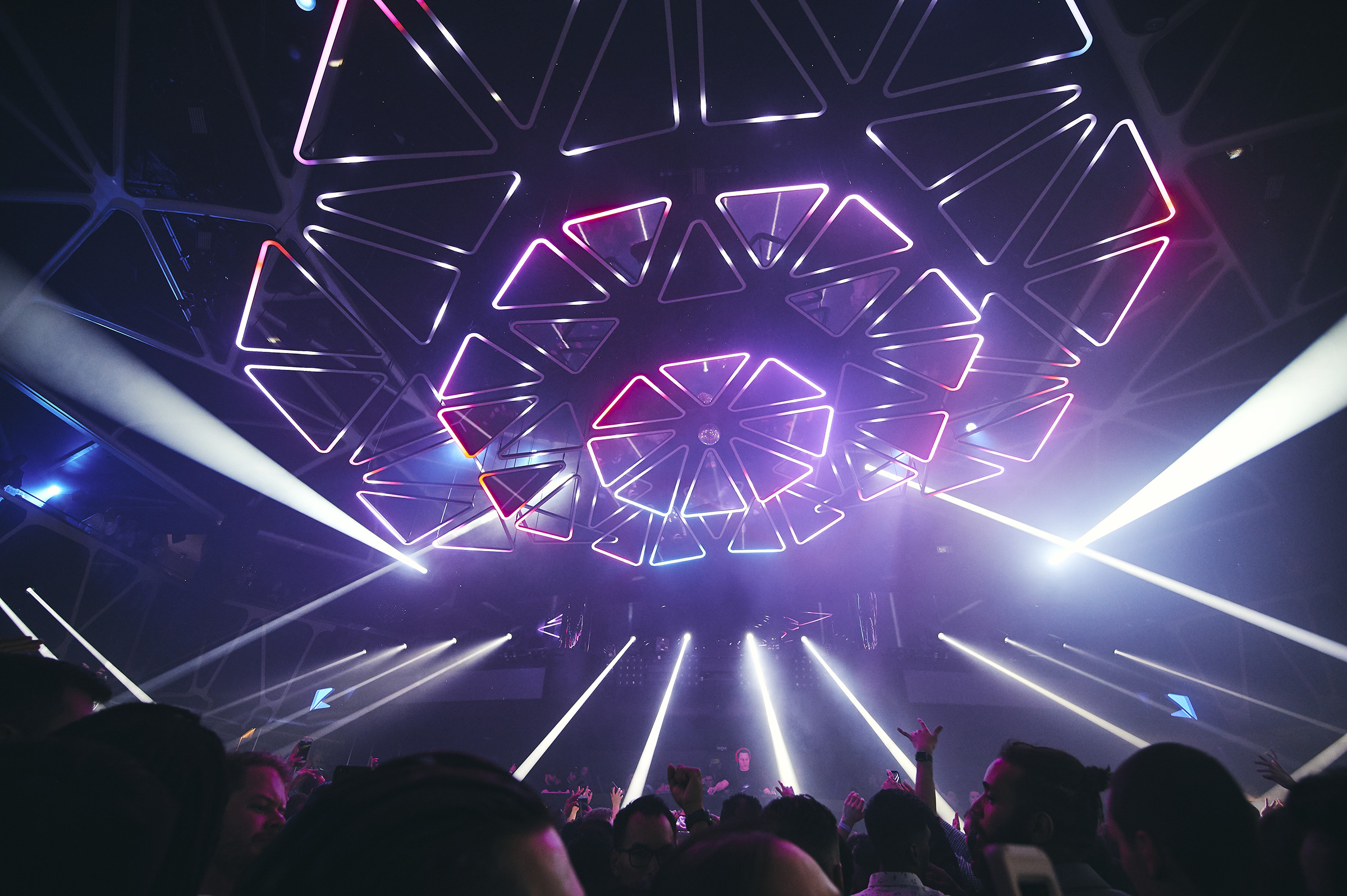 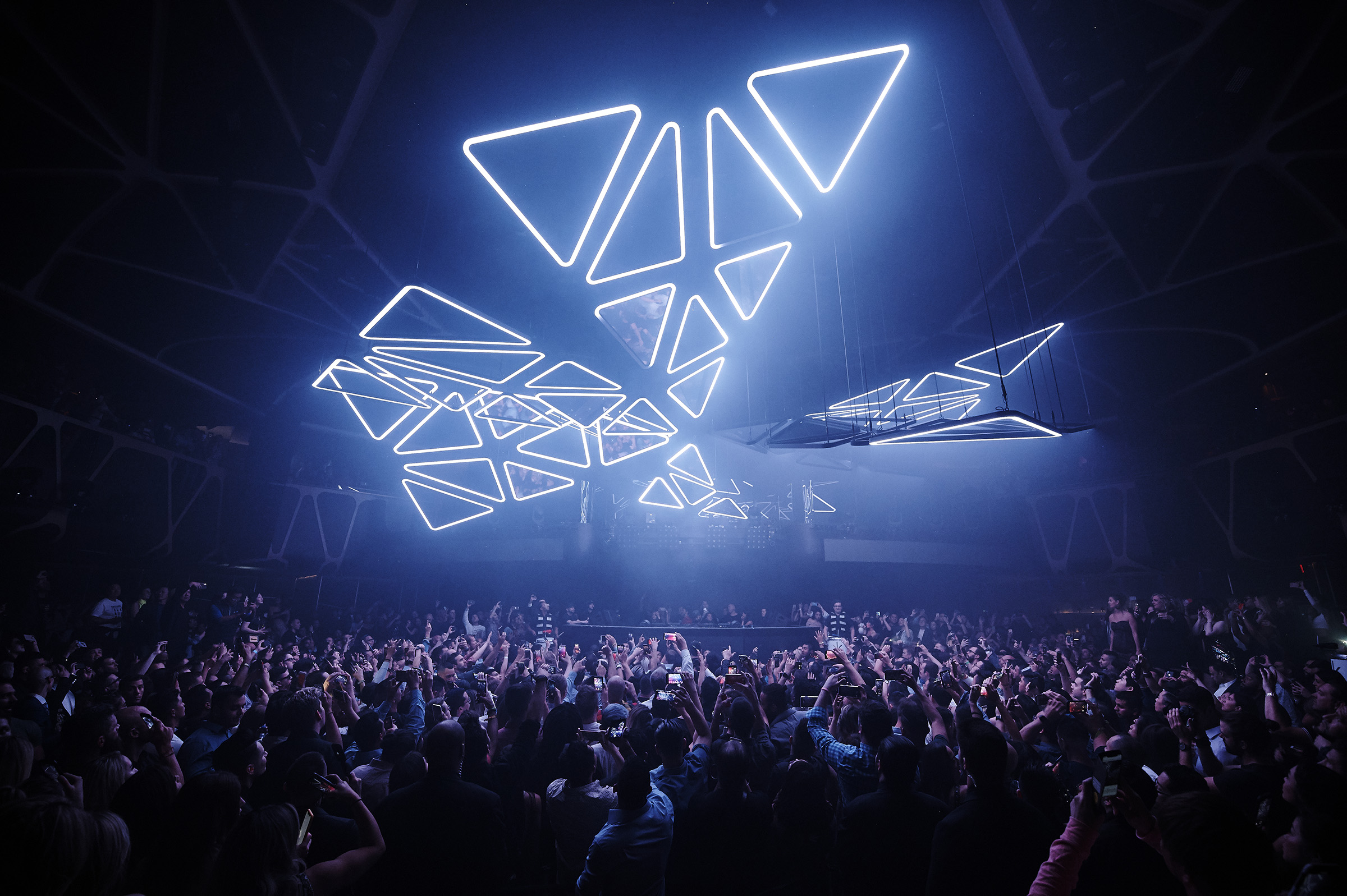 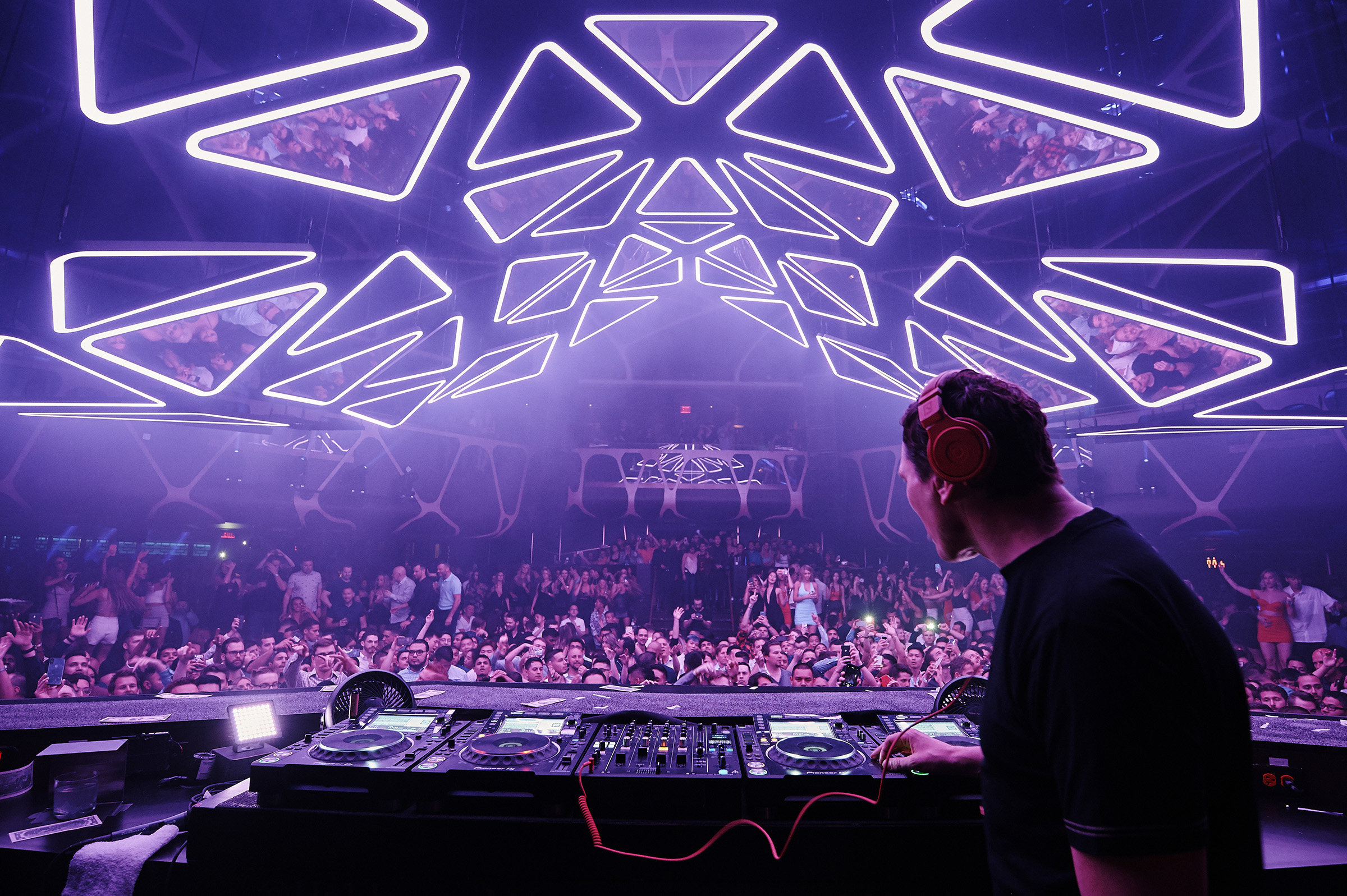 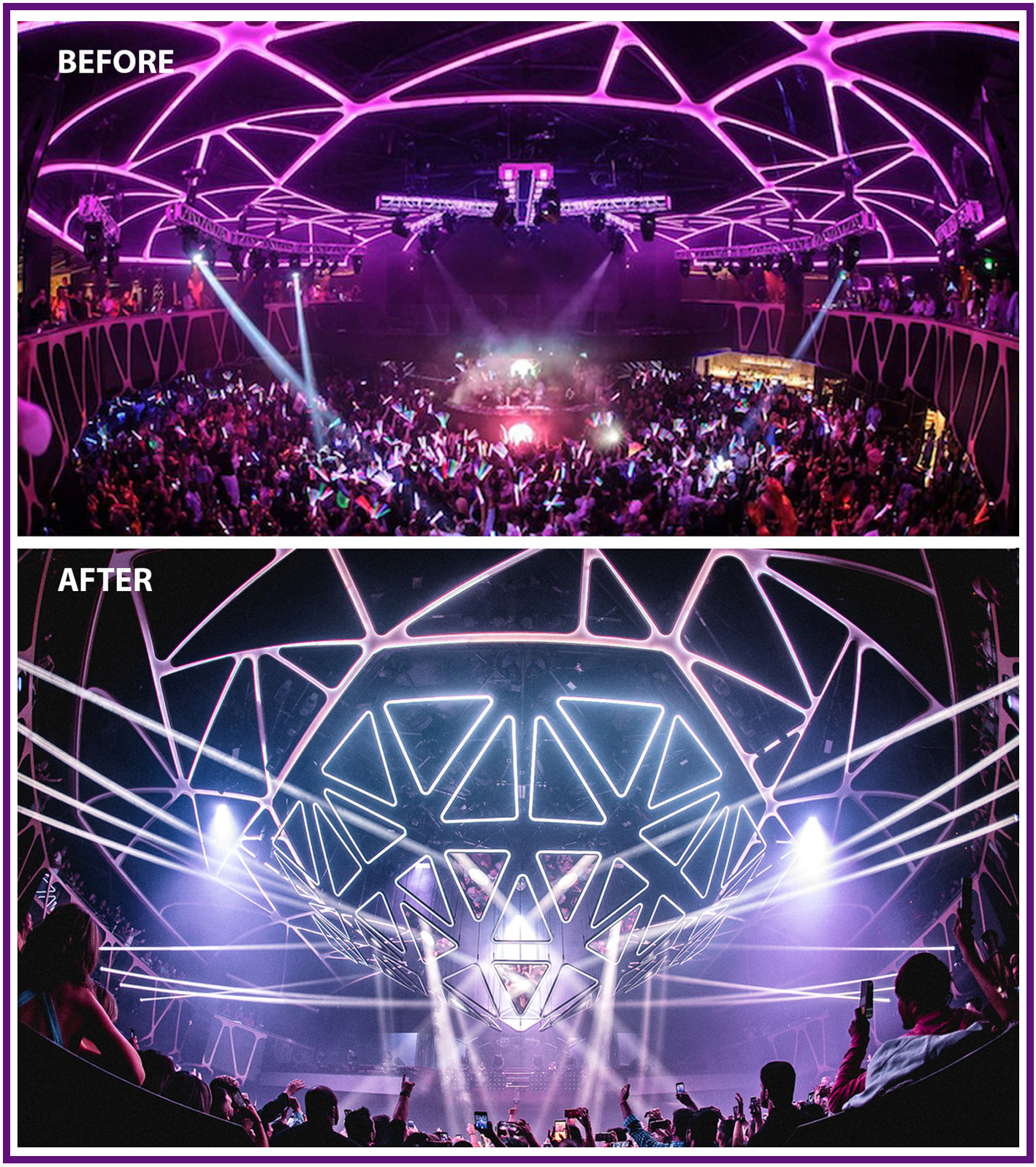 The Hakkasan Grid connects you to a new dimension. The Hakkasan Group had the desire to revamp its flagship Nightclub, the Hakkasan Nightclub, located at the MGM Grand Hotel & Casino in Las Vegas, Nevada. Whitevoid was approached by the Hakkasan Group to design, a bespoke automated LED system that would fit the existing overall design of the club. Box of Wishes partnered with Hakkasan and Whitevoid to make this uncommon creativity a reality by leading the development, integration, and remodeling. BRG join the team as the General Contractor in the procurement and delivery stages working hand-in-hand with Box of Wishes.

The entire installation is comprised of 169 Winch system, 28 moving lights, and 57 custom pixel-mappable LED Triangles. Among the Triangles are also 16 Mirrors that can be tracked with the moving lights creating awe-inspiring never seen effects. The entire ceiling transforms itself into infinite shapes and colors. The ceiling motion is controlled by a custom software solution, that was integrated into the rest of the nightclub system for seamless transitions between normal nightclub lighting and video into a next-level light, video, and kinetic sculpture that encompasses the entire room.

The Hakkasan Grid enhanced the Hakkasan Nightclub’s design elevating to the point of kinetic installation art. The Grid became an awe-inspiring-pièce de résistance transforming the nightclub experience. The HAKKASAN GROUP, already recognized for providing unforgettable experiences at its venues across the world, now has the largest permanent kinetic light installation in the United States, but the scope of this endeavor can be measured fully in the sense of wonder in produces in its audience.

The Hakkasan Grid was designed to fit the overall aesthetics of the existing Hakkasan Nightclub architecture and create an immersive dancing ceiling that would enhance the venue’s previous design and transform the show experience for Las Vegas club’s audiences.

The integration of the custom-built kinetic light installation “HAKKASAN GRID” into the Hakkasan flagship nightclub evolves from a luxury nightlife experience into one that is aesthetically sublime breaking down silos between entertainment, art, and technology.

Negotiation and Development lasted 9 months. On-site project execution took place over 6 weeks, without closing the nightclub during that period. The project was revealed to the public in May of 2019.

The ideation process was sparked by an idea internal to the Hakkasan Group. The Whitevoid team developed this initial idea fully designing it into a parametric arrangement following the logic and character of the existing club design. BOX OF WISHES developed this project with all stakeholders and numerous third-party vendors and consultants. From the first meeting to the unveiling night, Box of Wishes provided the overall project planning, budgeting, procurement specifications, technical direction, onsite project management, and vendor coordination on-site. Working with the General Contractor, BRG, Box of Wishes also led the negotiations between all the major stakeholders and put together the execution framework.

The project had several challenges that needed to be overcome. The ceiling had to be reinforced, and a custom steel structure had to be designed and fabricated to precisely locate (within 2mm) all 169 winches exactly where the 57 custom triangles would need to be located. Hakkasan nightclub is located on the 4th and 5th floor of its building. All the metal pieces of the structure had to be carried up the stairs by the steel fabricators and welded on site. Hakkasan required Box of Wishes to plan the entire remodel so that nightclub could not close. The remodel teams would arrive together with the cleaning crew at 5 am when the club was closing and would work daily until 8 pm when the next cleaning crew would arrive to prepare the club for opening at 10:30 pm. Many additional logistic challenges were also overcome due to the club being located in the largest hotel in the world (with over 7000 rooms) any structural changes needed to be explored and executed with the utmost care and under significant supervision. Numerous large-scale systems needed to be coordinated or relocated including, fire safety, electrical, water, sewage, and cryogen pipes (club special effects).