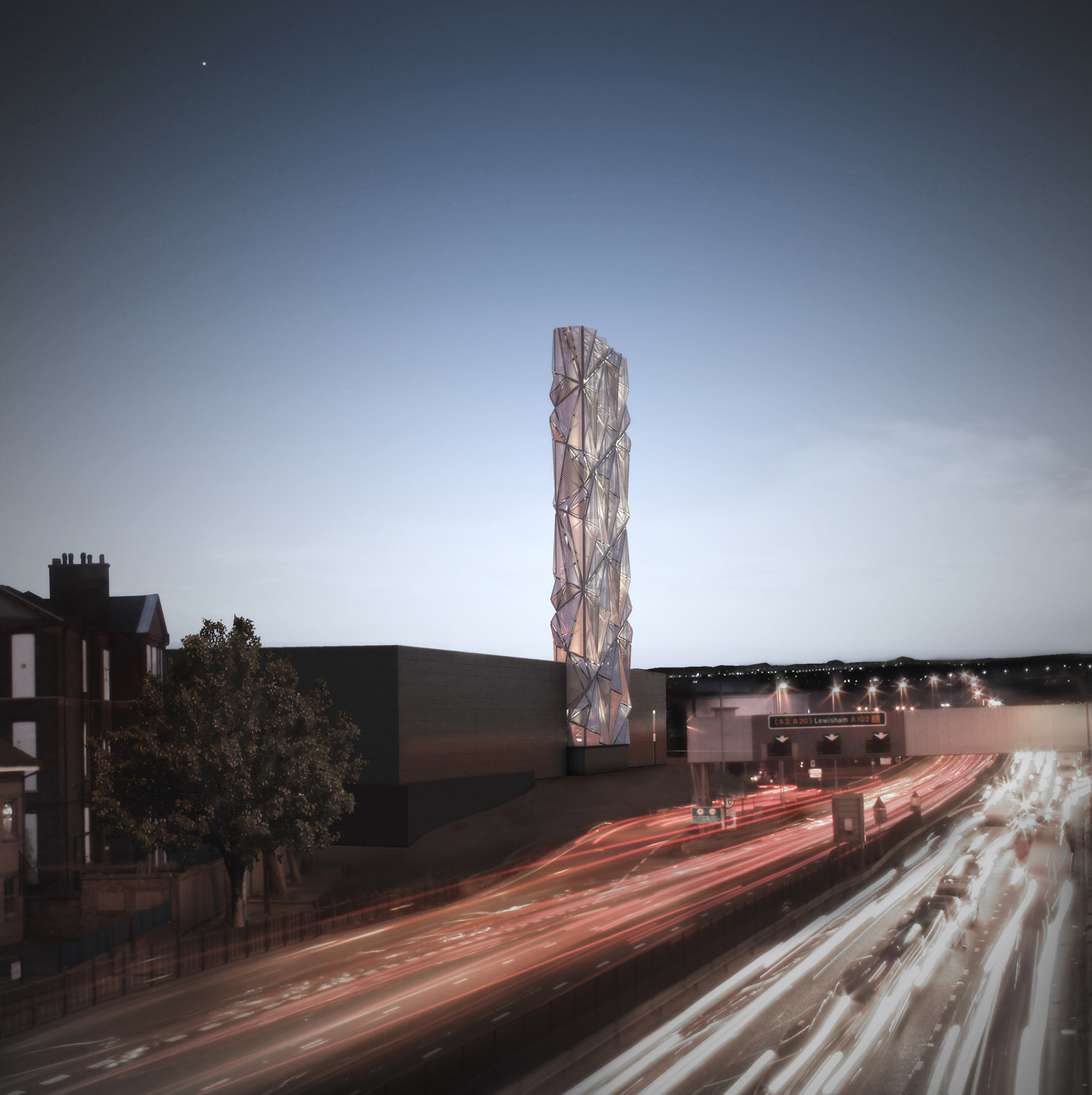 C.F. Møller Architects, artist Conrad Shawcross and developer Knight Dragon reveal the design of a major new art and architecture collaboration for the Greenwich Peninsula Low Carbon Energy Centre. The 3000 m2 Energy Centre, situated in a prominent location at the entrance to the peninsula, is a highly visible and important new landmark that demonstrates the stakeholders’ commitment to sustainable and affordable energy for all. Heat energy will be distributed via a District Heating Network from the Energy Centre to each of the over 10,000 new homes and 300,000 m2 of office space across the Greenwich Peninsula urban development.

Designed by British artist Conrad Shawcross, the cladding of the 49 metre high stack tower unites sophisticated engineering and complex optic research to create an impressive sculptural concept on a huge scale: The cladding for the structure will be formed of hundreds of triangular panels, each the height of a London bus. These tiles fold and flow across the surface of the tower forming complex geometric patterns that visually break up the flat planes to create an uneven, sculpted surface that plays with the vanishing points and perspective.The artist’s intention is to create an ambiguous and beguiling surface that disturbs and dematerializes the massing of the tower structure, producing a form that remains abstract and hard to define yet one which could potentially become a talking point for the local and wider community. The panels are perforated so as to exploit the phenomena of the Moiré Effect, and at night an integrated lighting design will produce a shifting series of ‘compositions‘ lit from within the structure.

The integration of artwork, design and architecture works seamlessly on the GPLCEC project: The Low Carbon Energy Centre tower was identified as a canvas for a public art commission by project curators Futurecity to support Knight Dragon’s commitment to art and culture across their development. Based on the design by C.F. Møller Architects which featured a 49-meter tall flue tower originally called "the Blade", Futurecity organised a competition and shortlisting process and Conrad Shawcross’s design was selected by a panel from a short list of three artists. Subsequently, Shawcross' design was integrated into the architectural development of the project. The commission for the GPLCEC is part of a wider cultural programme on the Peninsula, including other notable public artworks.

To demystify the process of energy generation, the Energy Centre’s machine room and flexible ancillary office accommodation is supplemented with a Visitor Centre offering an interactive educational experience for prearranged groups of visitors. Construction will start in 2015, and be completed in 2016, and the building footprint further allows for flexibility in adopting new energy technology over the building’s substantial lifetime.