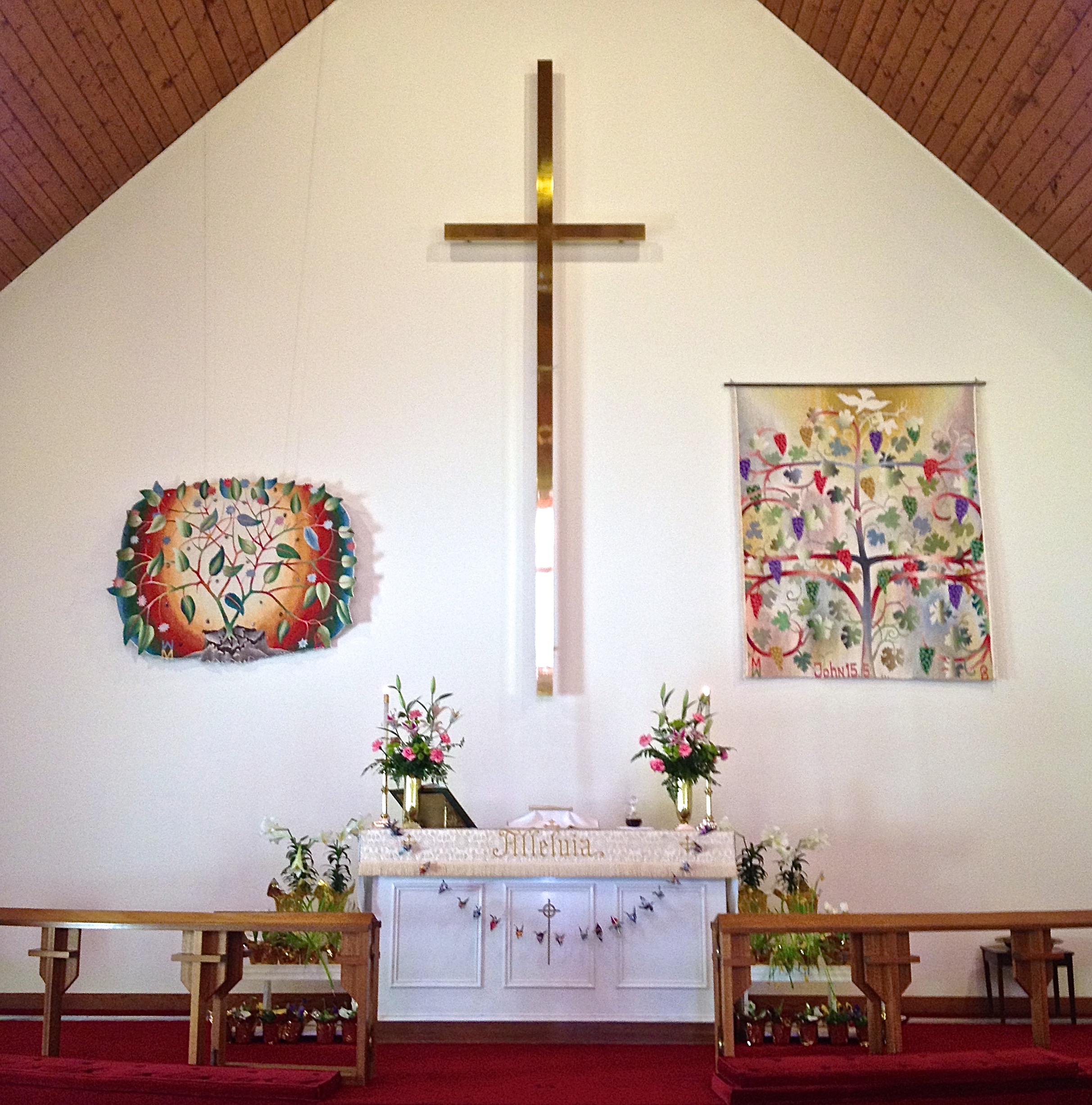 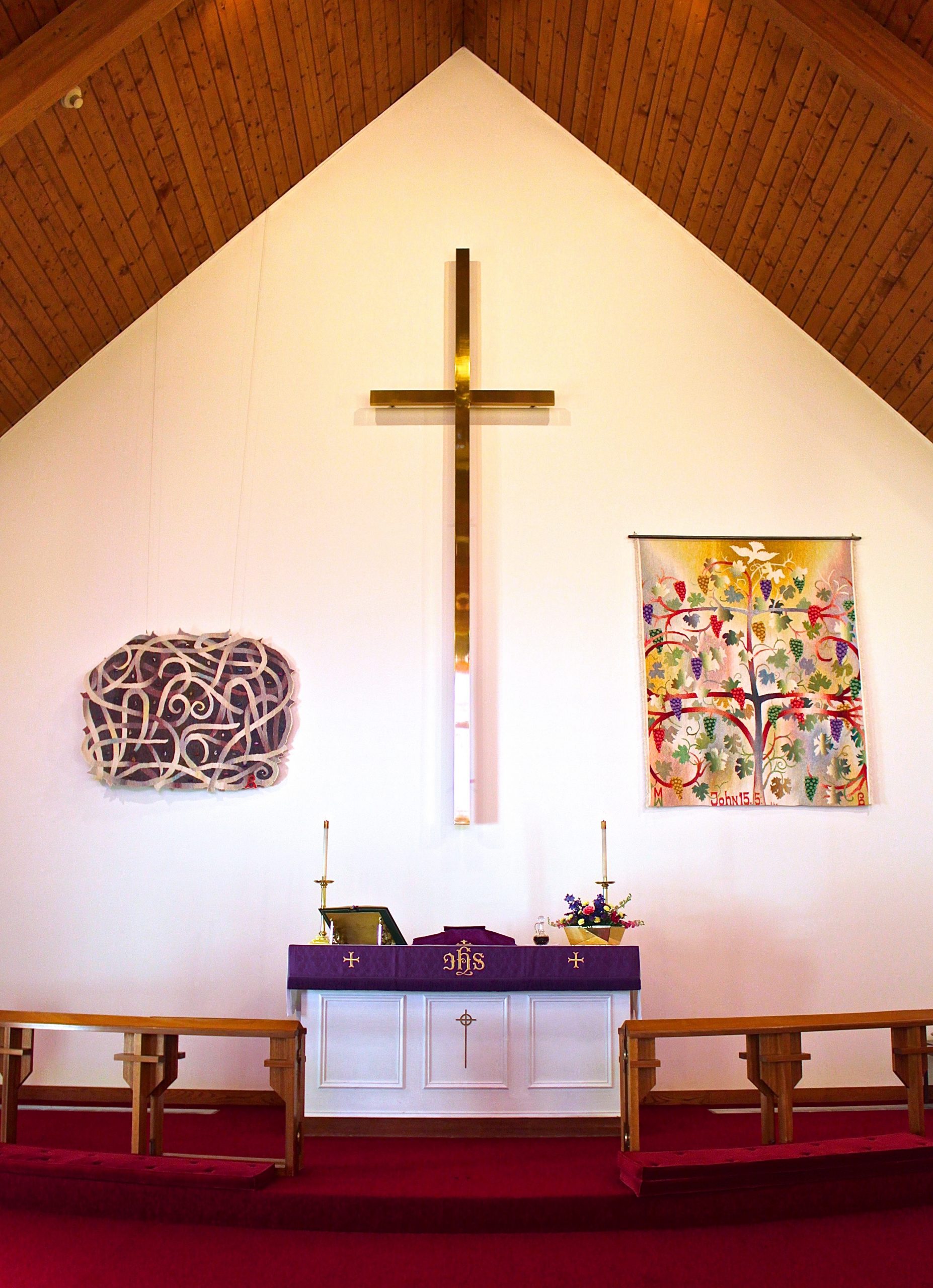 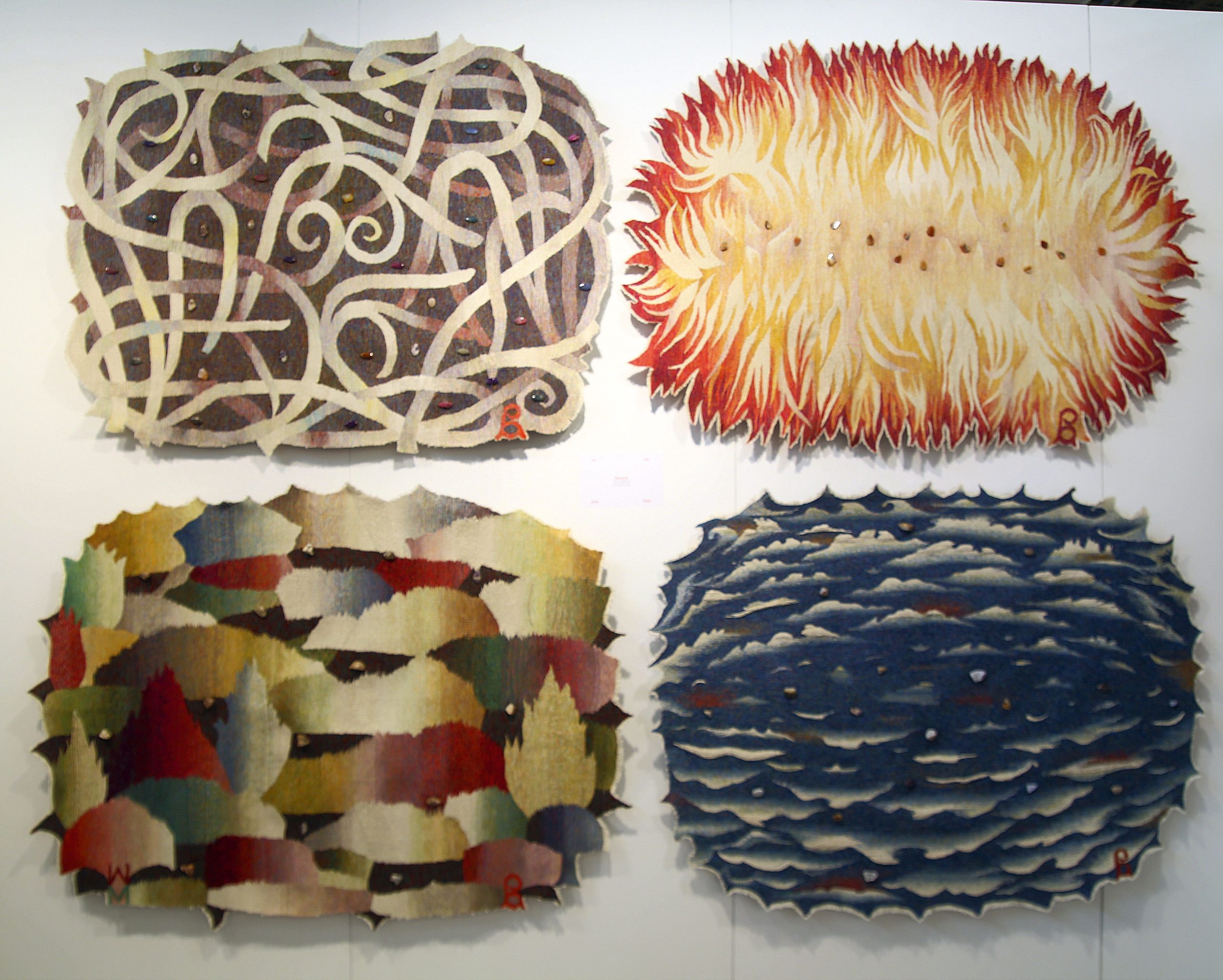 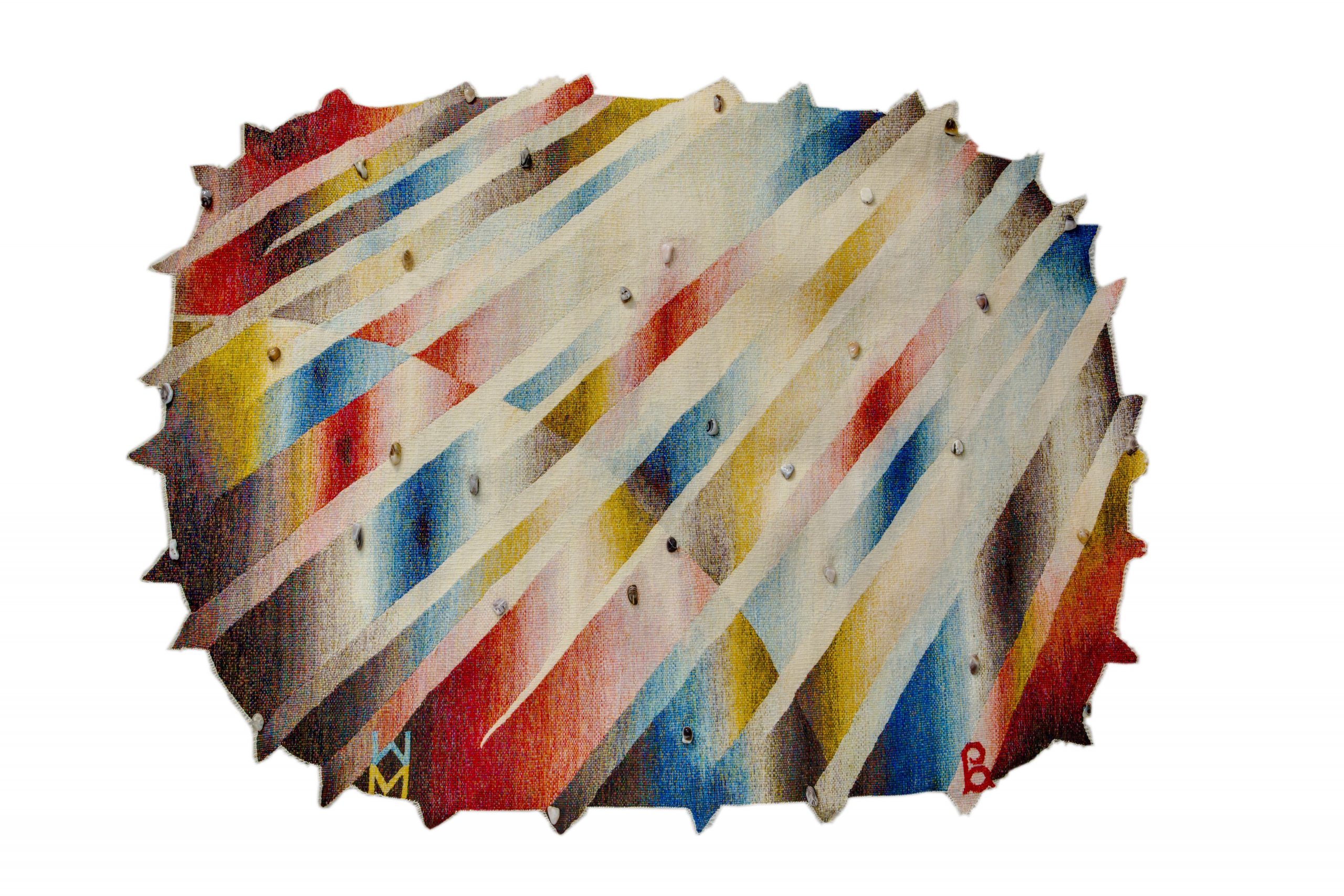 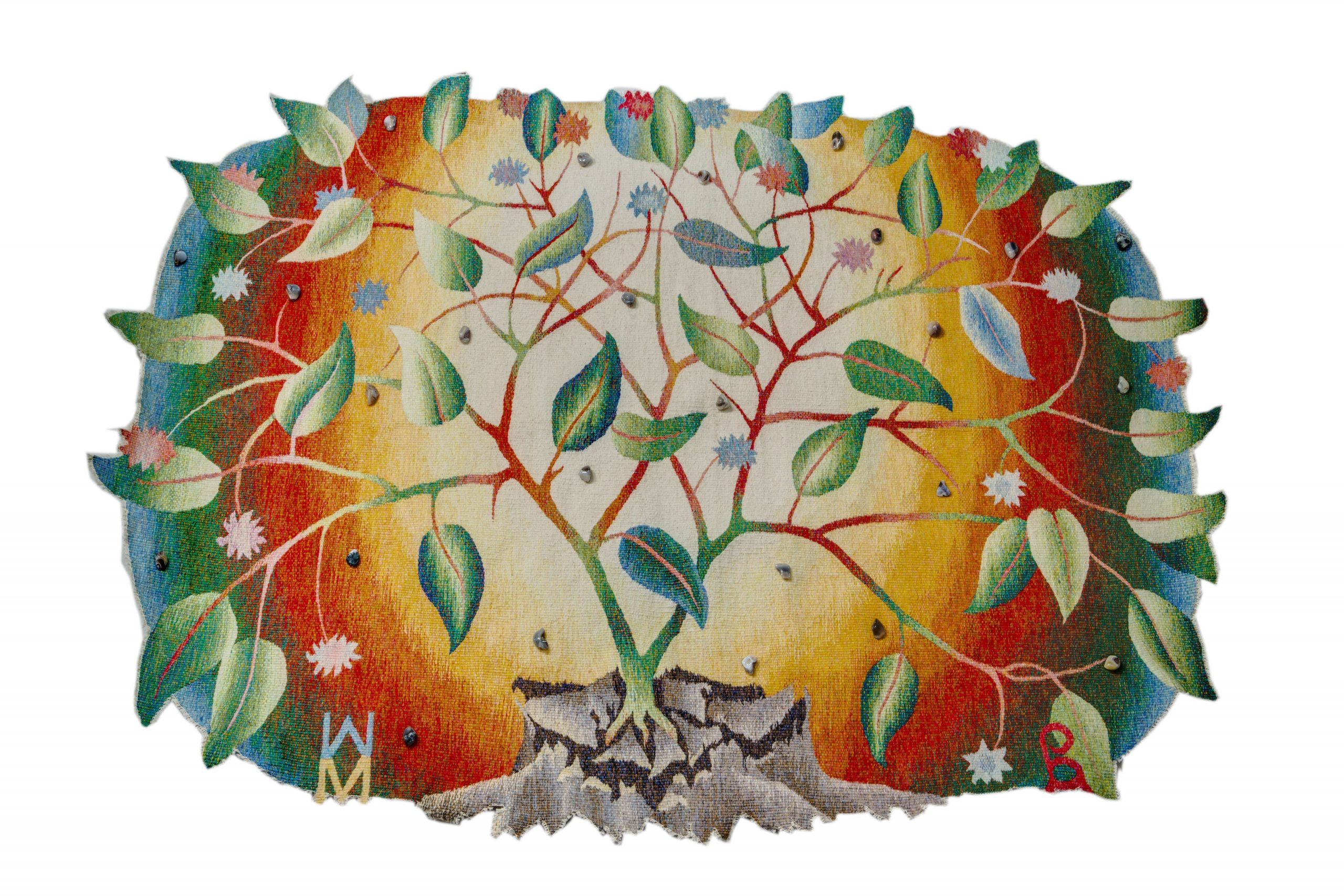 'Elements' is a series of 6 free-form tapestries for the East Wall of Grace Lutheran Church in Scarsdale, NY, commissioned in 2012/2013. The tapestries are designed to reflect and enhance the changing seasons in the church year. Each Element measures approximately 43″ x 53″, hand-woven wool on cotton. Woven into the tapestries are semi-precious stones mounted with nylon thread. The series complements the church's permanent tapestry on display on the same wall, depicting a rendition of John 15:5: 'I am the Vine, you are the Branches.'

Recently, Grace Lutheran Church embarked on a journey of change and renewal, reversing years of decline. With limited resources, the small congregation sought to reconnect to its community, and to become a welcoming spiritual home for all, particularly young families. For its 60th anniversary in 2009, the 'John 15:5' tapestry had been gifted to the church and mounted on the East Wall to the right of the cross. The positive response of parishioners led to the consideration of the empty space to the left of the cross as an area of rotating art in accordance with the church year. Reaching out in 2012 to the Muslim artist who had created the 'John 15:5' tapestry was both logical and spiritually appropriate. Beyond the pure visual invitation to contemplate the church season, the tapestries created a bridge between Central Asia and the United States, and between two faiths - Muslim and Christian - in need of common ground. The artwork focuses on what unites rather than what divides us, and resonates deeply with the congregation.

Alibay Bapanov, designer and weaver of the tapestries, lives and works in Kazakhstan. Art beyond borders LLC represents him in the United States. Mr. Bapanov visited the church in 2009 for the dedication of his 'John 15:5' tapestry, and therefore had a thorough understanding of the space, and the anticipated role of the 'Elements' tapestry series. He deepened his research into Christian imagery and liturgical colors, while adding elements of his own spiritual background. As an ethnic Kazakh, Mr. Bapanov grew up with both Muslim and Central Asian Animist traditions. Thus, tying back seasons of the church year to the elements Air /Lent, Water/Baptism, Fire/Pentecost and Earth/Ordinary Time was a natural fit, both for the artist and the church. In 2013, Hope/Easter and Light/Christmas were added to the original four Elements. Meggy Wagner of Art beyond borders served as an interpreter between the church and the artist, and secured a sponsor for the project.