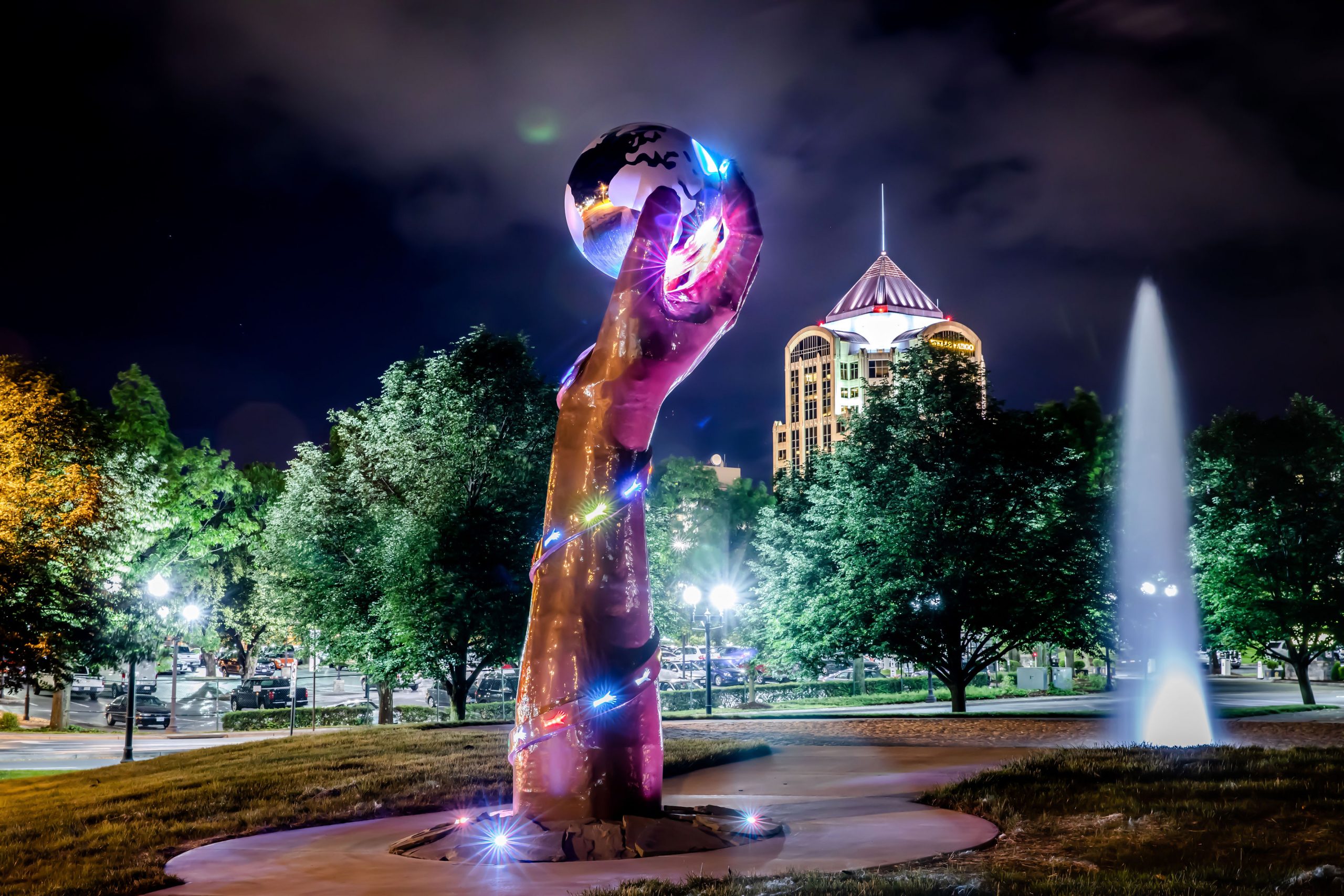 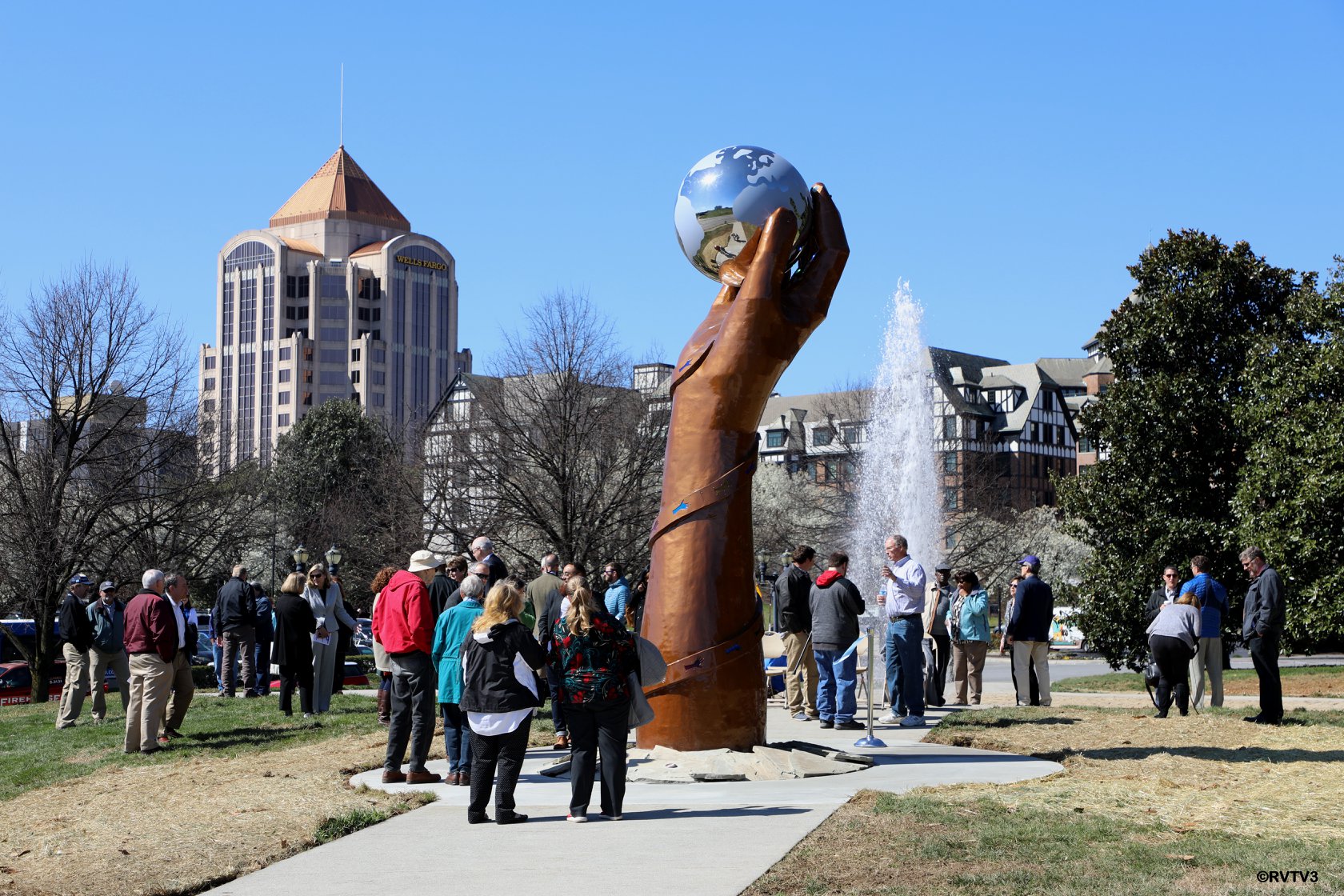 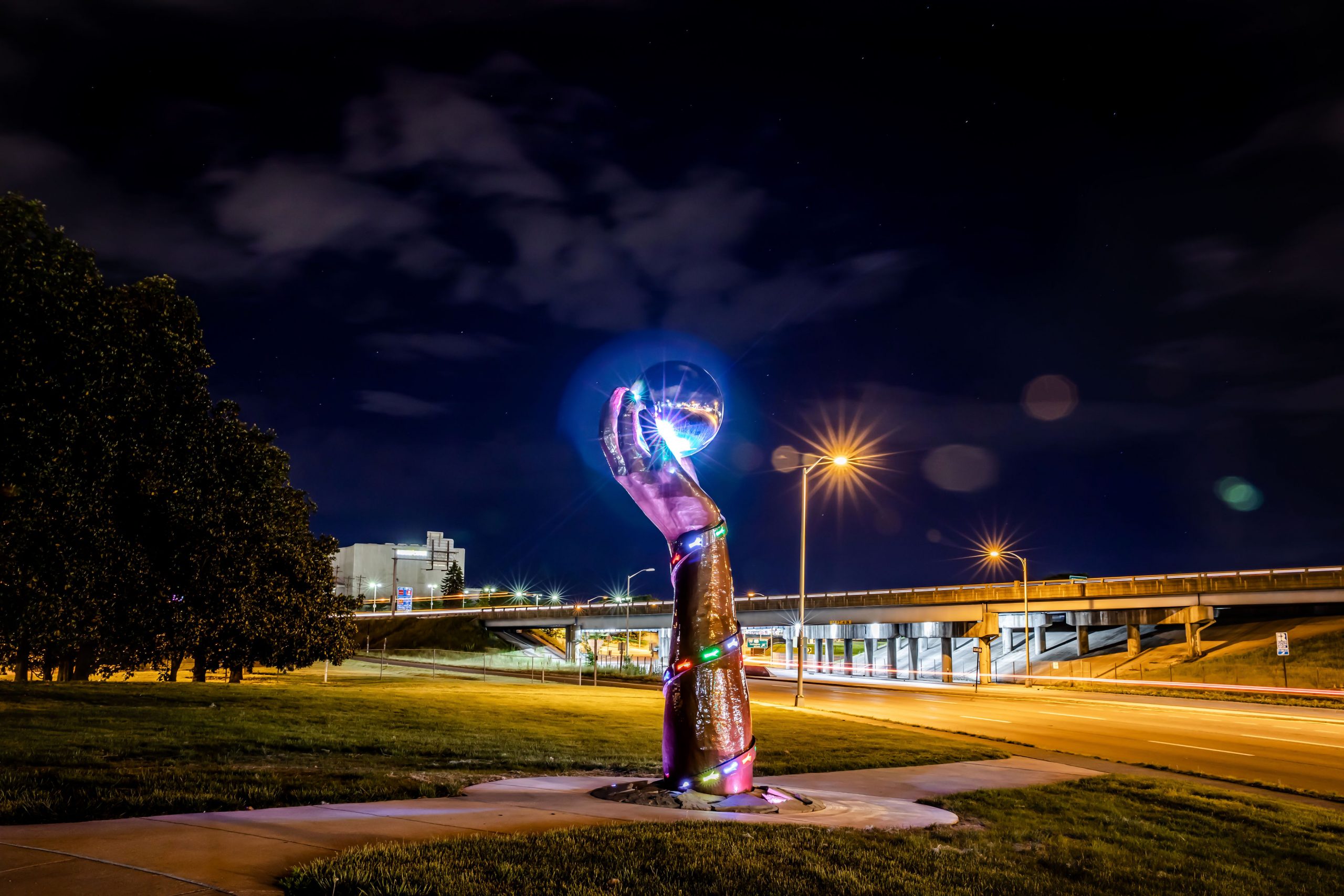 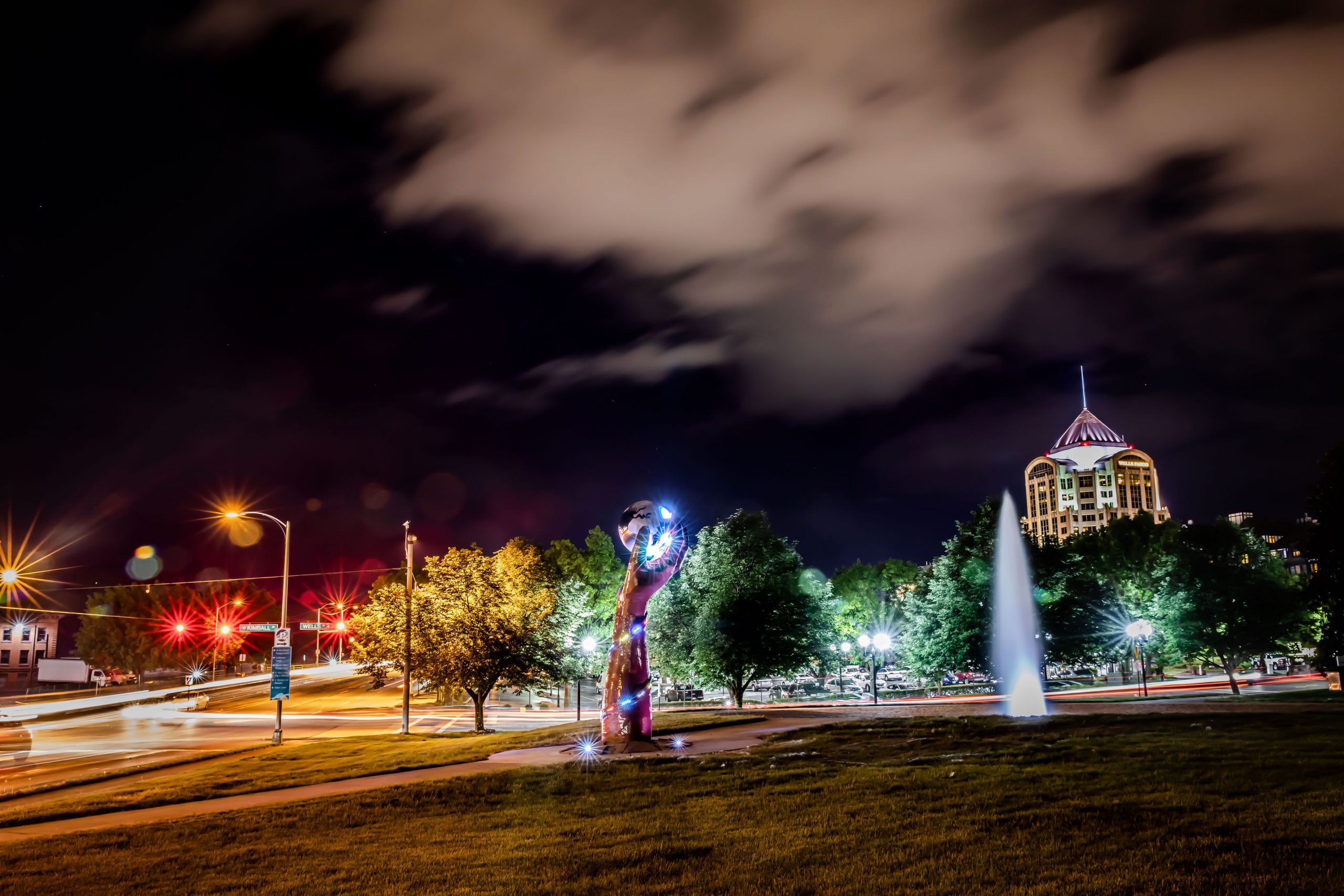 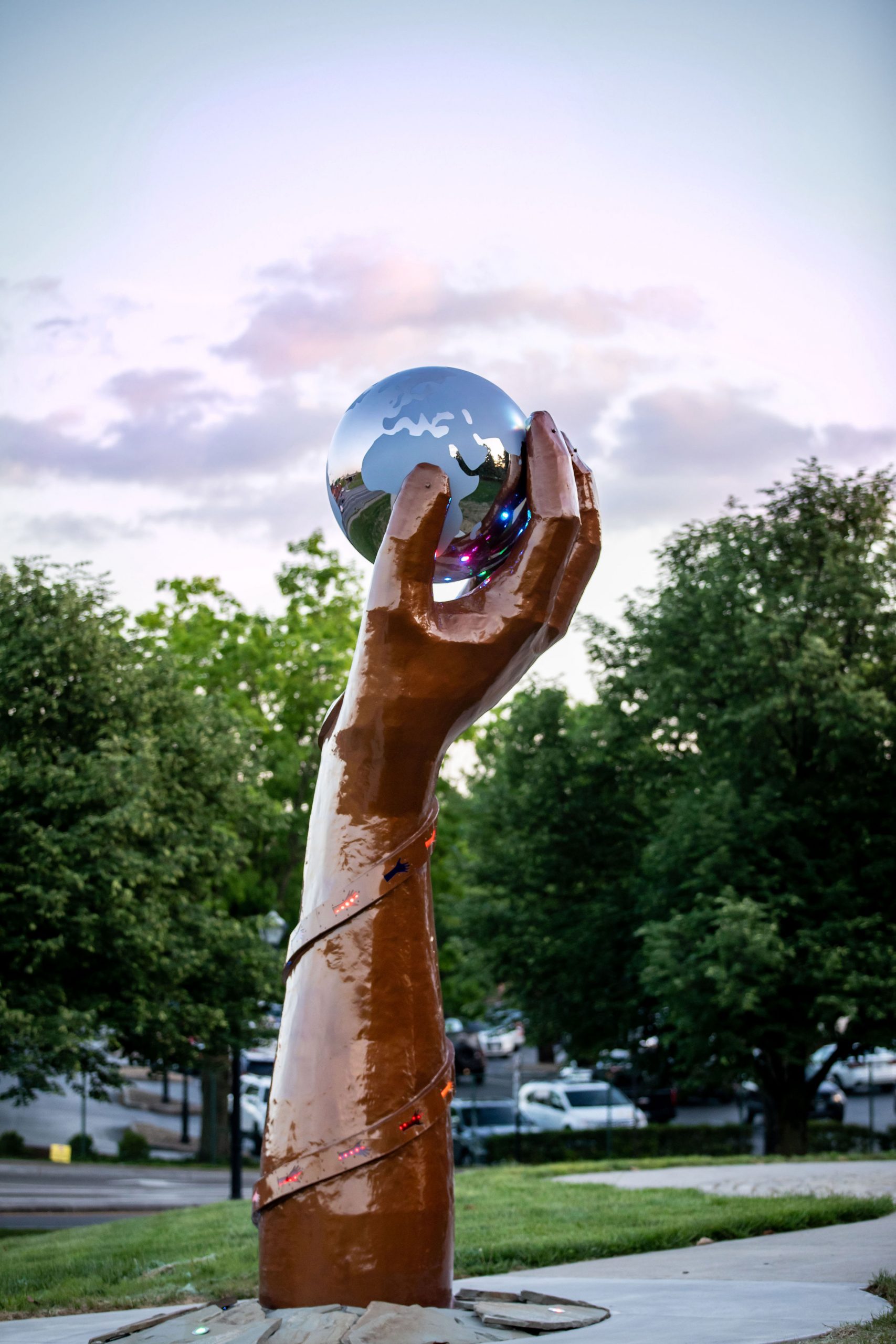 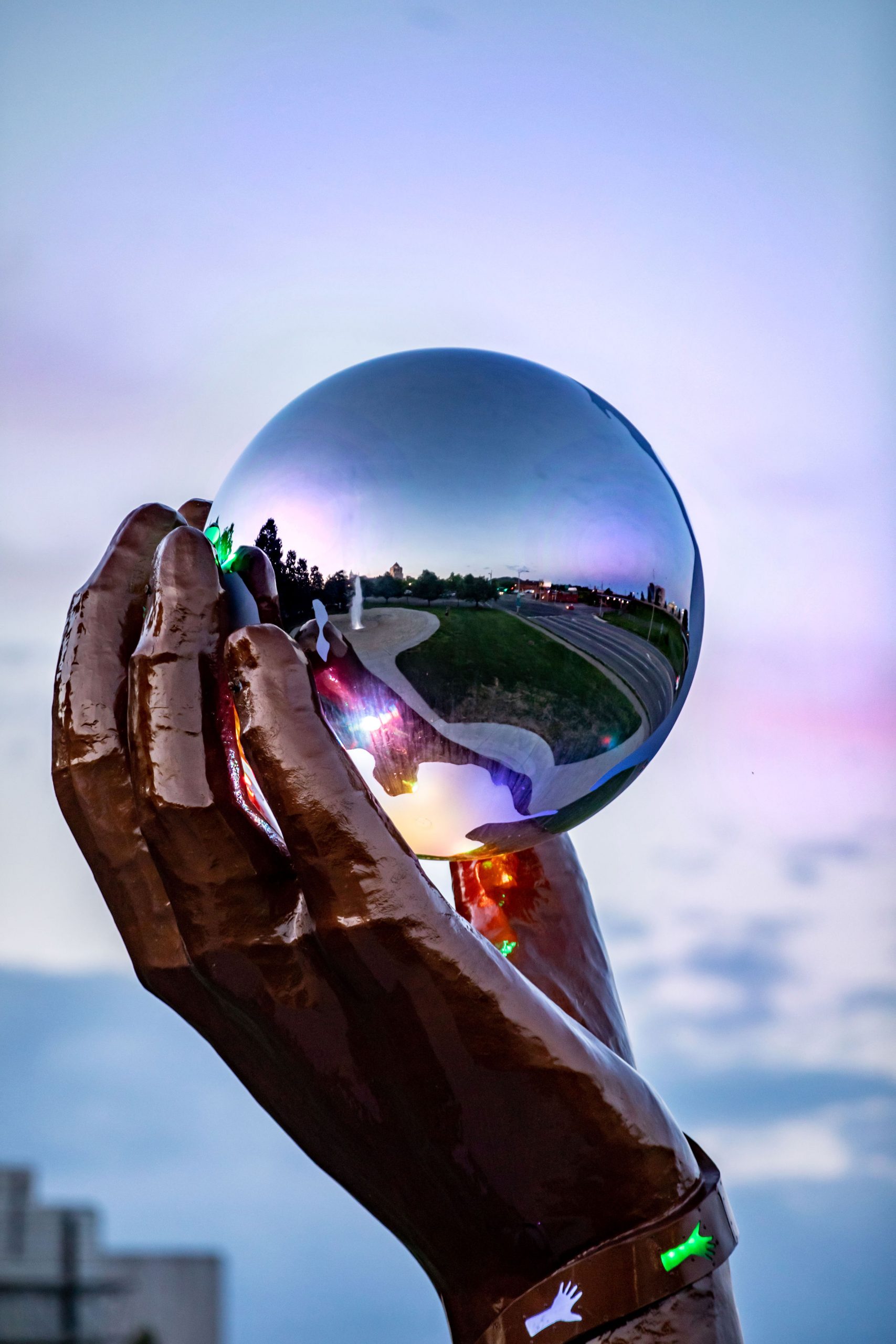 A monumental new media sculpture welcoming newcomers to downtown Roanoke, VA, and honoring the city’s history of welcoming the diversity of its inhabitants. Roanoke was the first city in the Commonwealth of Virginia to get the designation of a “Welcoming community” from the national “Welcoming Communities” initiative in 2015. The hand/arm has a steel pipe, rod and perforated metal armature with fiberglass exterior surface; automobile catalyzed urethane enamel and clearcoat final finish; 4' diameter stainless steel sphere with continents sandblasted on it; RGB LEDs in palm/fingers, with RGB strip lights in “ribbon” encircling the forearm, lighting the hand cutouts.

The city of Roanoke's goal for the project was to commission a monumental new media sculpture, to be located on the major entry thoroughfare to the city center - Entranceway Park in Roanoke, to serve as a tangible icon of the city's past and current efforts to welcome diverse ethnic groups to Roanoke. A secondary goal was to celebrate Roanoke's 10th year anniversary of commissioning public art in the city. Global Harmony was selected as the commission to accomplish both these goals, and to be an iconic, monumental new media sculptural installation to achieve complete integration in the overall design of Entranceway Park.

The collaboration involved: For the New Media Public Art Collective – Stephen Fairfield, founder and lead artist, David Olsen, 3D designer, George Lounsbury, structural engineer, Nathan Ricks, stone mason; For the City of Roanoke, – the major players included Susan Jennings, Arts and Culture Coordinator, and Charlie Anderson, architect.
Terms of the collaboration were the City of Roanoke would provide the infrastructure development (sidewalk and footings, and electrical service provision to the sculpture) as well as the final engineering review and certification. These services were provided in exchange for a small financial payment from the original commission, and relieved our collective from having to find VA-certified engineers and contractors, and guaranteed that the city would get the infrastructure modifications they wanted, so there were no lengthy approvals, inspections, etc.
Our Collective created the original design (Fairfield) which was then converted into a 3D design (Olsen), reviewed for physical integrity and robustness (Lounsbury), and then fabrication patterns were computer generated for the hand (Olsen), and footings (Lounsbury). The sculpture was fabricated in Fairfield’s studio by him and his assistants and delivered to Roanoke where the city’s maintenance department (Anderson supervising) provided the installation. Fairfield and Ricks installed the base stone and lighting.

By commissioning a bold, visible gateway sculpture that makes a statement to all who enter the city, “Global Harmony” symbolizes the City of Roanoke’s desire to honor its diverse racial, ethnic and cultural population. The hand, a worldwide symbol of diversity, supports the globe; smaller, different colored hands spiral up the forearm. The message is clear: It is only through the world’s populations joining together to do their share of supporting the planet that we will even approach the ideal of global harmony. Stephen Fairfield, Artist