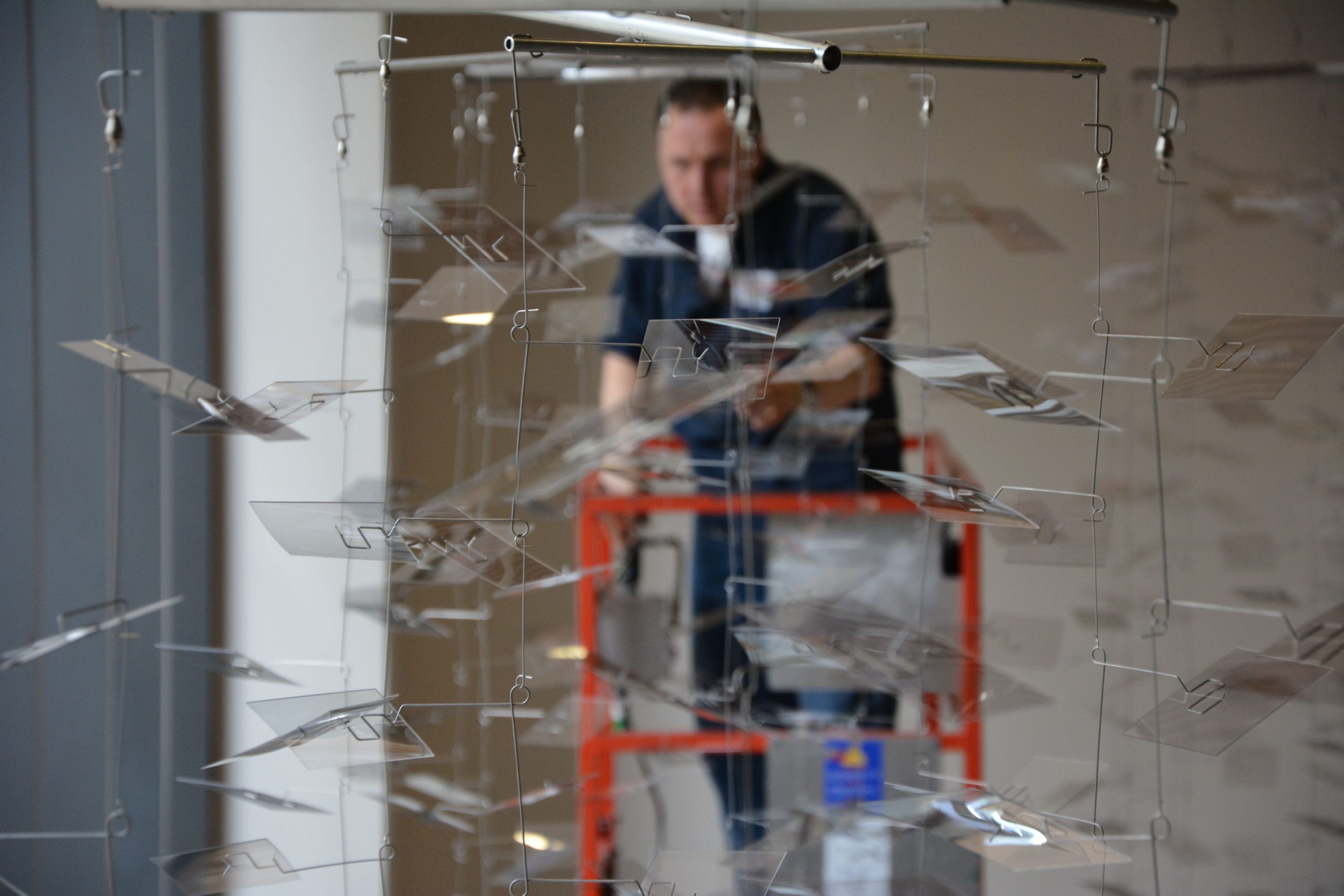 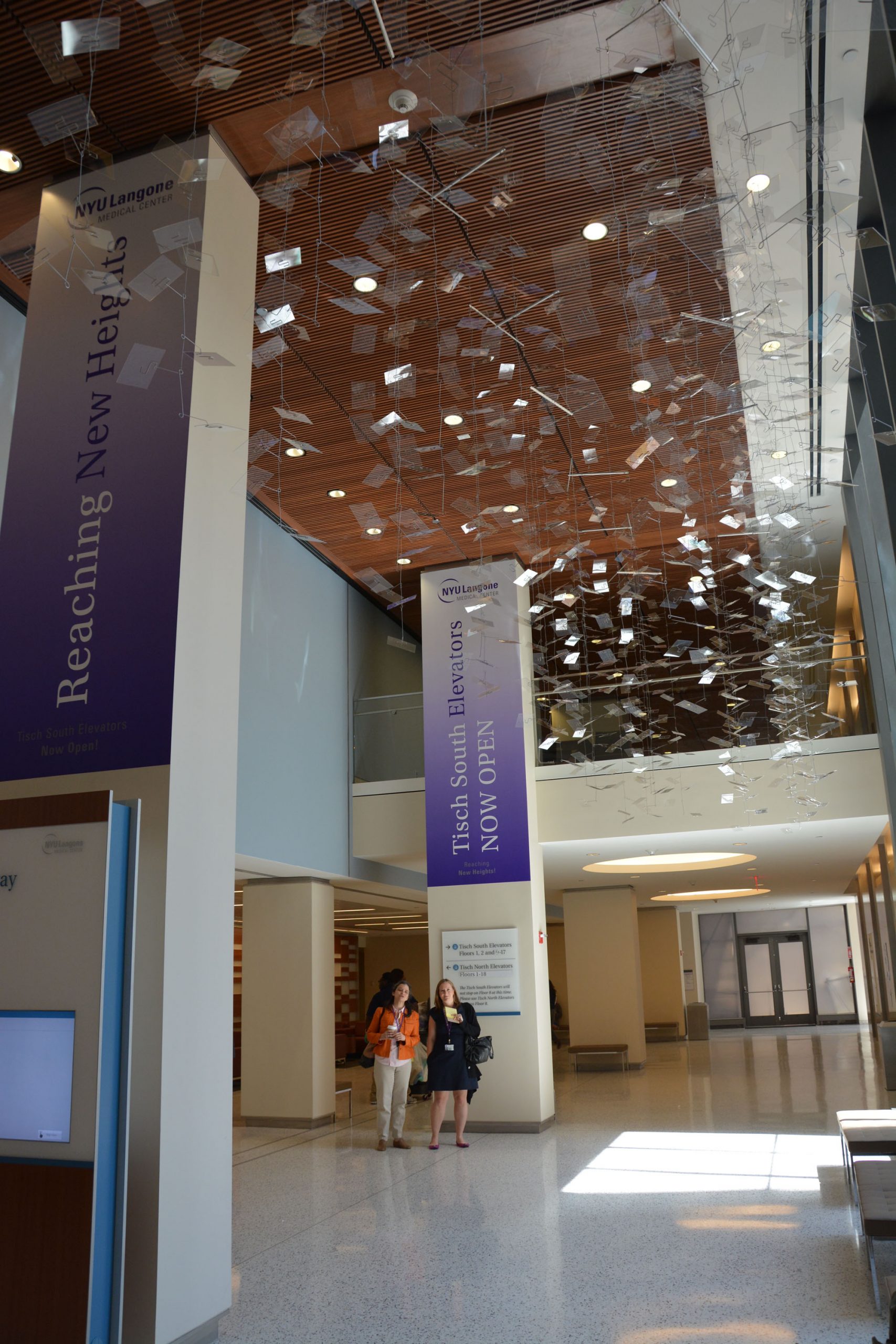 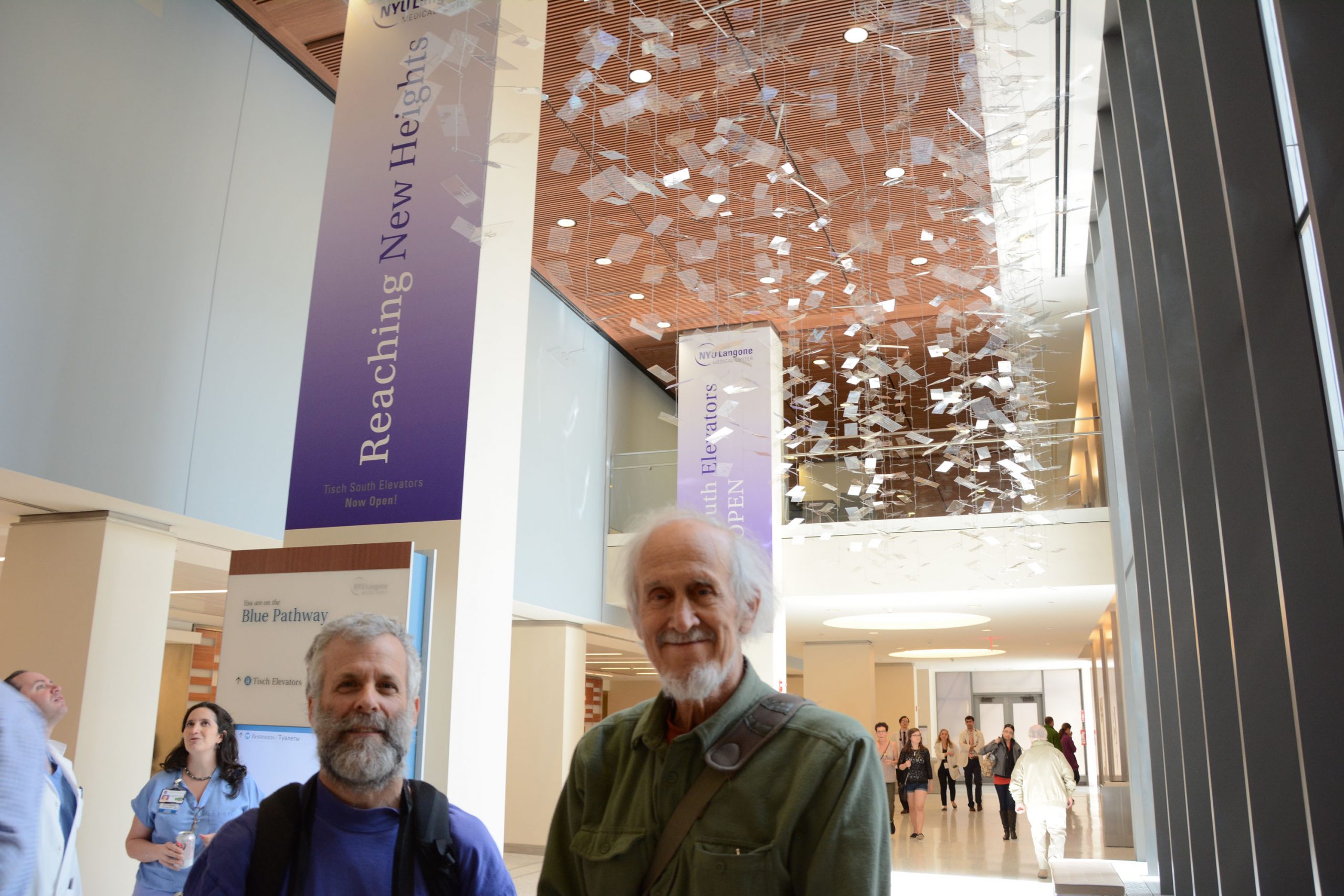 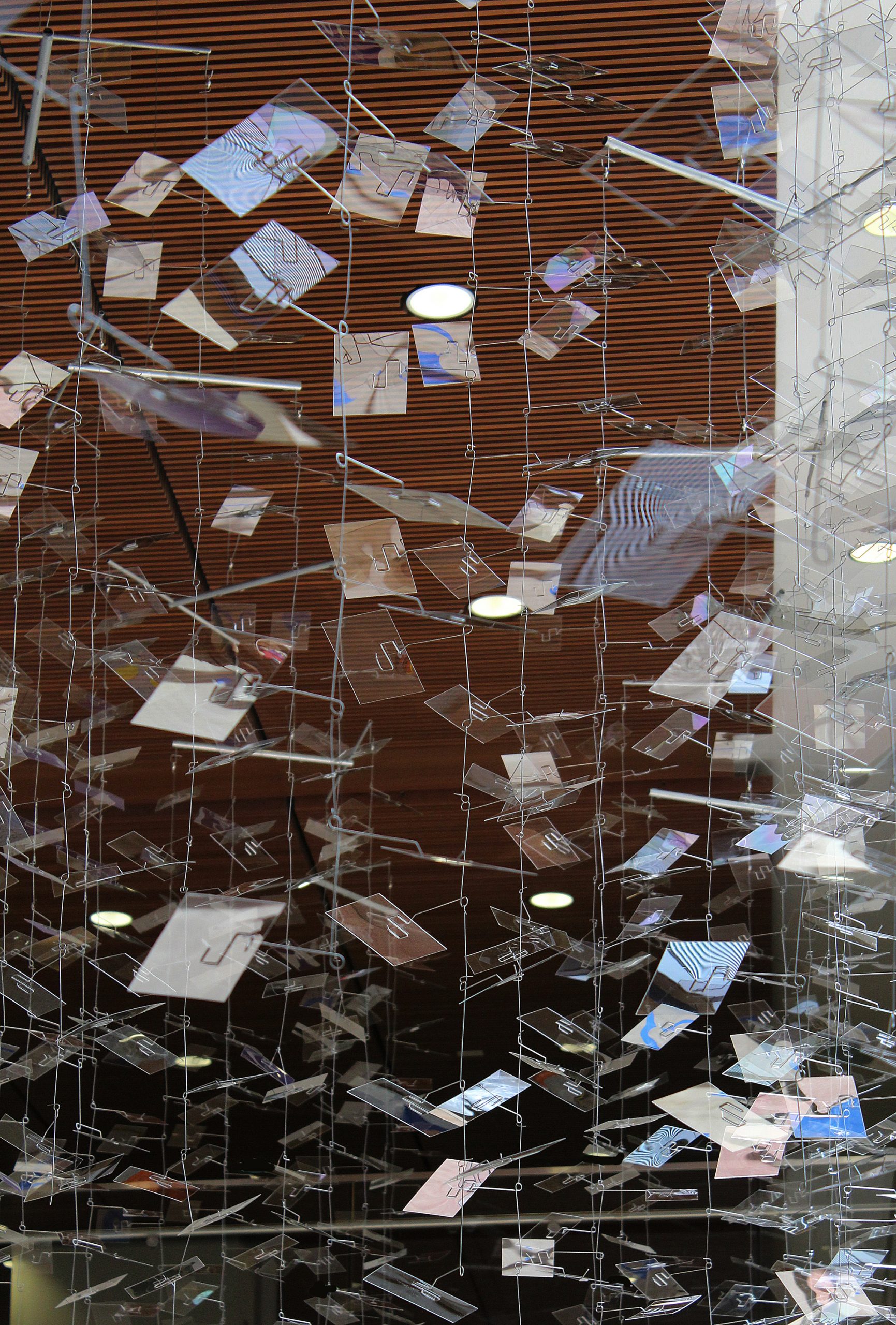 Glissando is a kinetic suspended sculpture that responds to the slightest currents of air. Designed of hundreds of small squares of Lexan and occupying approximately 1078 square feet of space, the artists created a series of suspended elements in the new Tisch Lobby. The Lexan medium ‘reads’ as glass and responds to the changing environmental conditions of the space, the cycle of the day and seasonal changes. Upon entering the Tisch Lobby from the Kimmel Pavilion, the viewer encounters a room filled with the energy of a thousand fireflies.

The Tisch Elevator Lobby was an expansion project within the main NYU Langone Medical Center on First Avenue in New York City that would allow better traffic flow, amenities, and overall a better aesthetic experience to thousands of patients, visitors, and staff. The project involved extending the lobby to include 4 express elevators, a 2-story curtain wall to the outside garden, a meditation room, and garden access. It was thought by the Real Estate Development and Facilities office that either a painting or sculpture could be applied to the new two-story lobby to serve as a welcome and escape for all. Original designs attached. As the project grew and the NYULMC Art Collection continued to receive commendations, the Project Managers realized that overall patient experience would be improved with artwork in the space. The sculpture was created especially for Tisch after Prentice and Colbert were selected by a five-person committee. The group included four representatives from inside NYULMC and an independent public art expert. Four finalists were selected—two sculptors and two painters—and ultimately, in a process that took around four months, not including delays caused by Hurricane Sandy, Prentice and Colbert were chosen.

The NYU Langone Medical Center was badly damaged from Hurricane Sandy, just a few weeks after the initial proposal process for the artists. The Art Committee provided feedback that the artists used to fine-tune initial proposals until they were able to come back for final consideration after the hospital's three month long recovery. The Art Committee felt strongly that the artists considered the space to its full advantage while maintaining a ethereal aesthetic that could engage and transport patients and staff 24-hours a day. Because of this considerate attention to the space, Tim Prentice and David Colbert were chosen. The artists embarked on final designs for the kinetic sculpture working with the architects, their own team of engineers, the Art Manager of the NYU Langone Medical Center, and patients and staff throughout the hospital. The artists created videos, mock-ups, and drawings so that many people throughout the medical center could understand the process and idea behind Glissando. On the day of installation, as in the article attached, almost everyone agreed it was a welcome presence and exactly what they wanted for the new Tisch Lobby space.

General Comments from Individuals: Colbert described one staff member’s reaction, after spending a few minutes looking at the artwork and initially being hesitant to express an opinion. “Her face relaxed, and then her whole body relaxed and she said, ‘This is going to brighten up my days here. It feels like snowflakes on my cheeks.’” Other people saw something completely different. A doctor passing quickly underneath called out with a smile, “I feel like I’m in a crib,” referring to the mobiles that parents often hang above their sleeping infants.