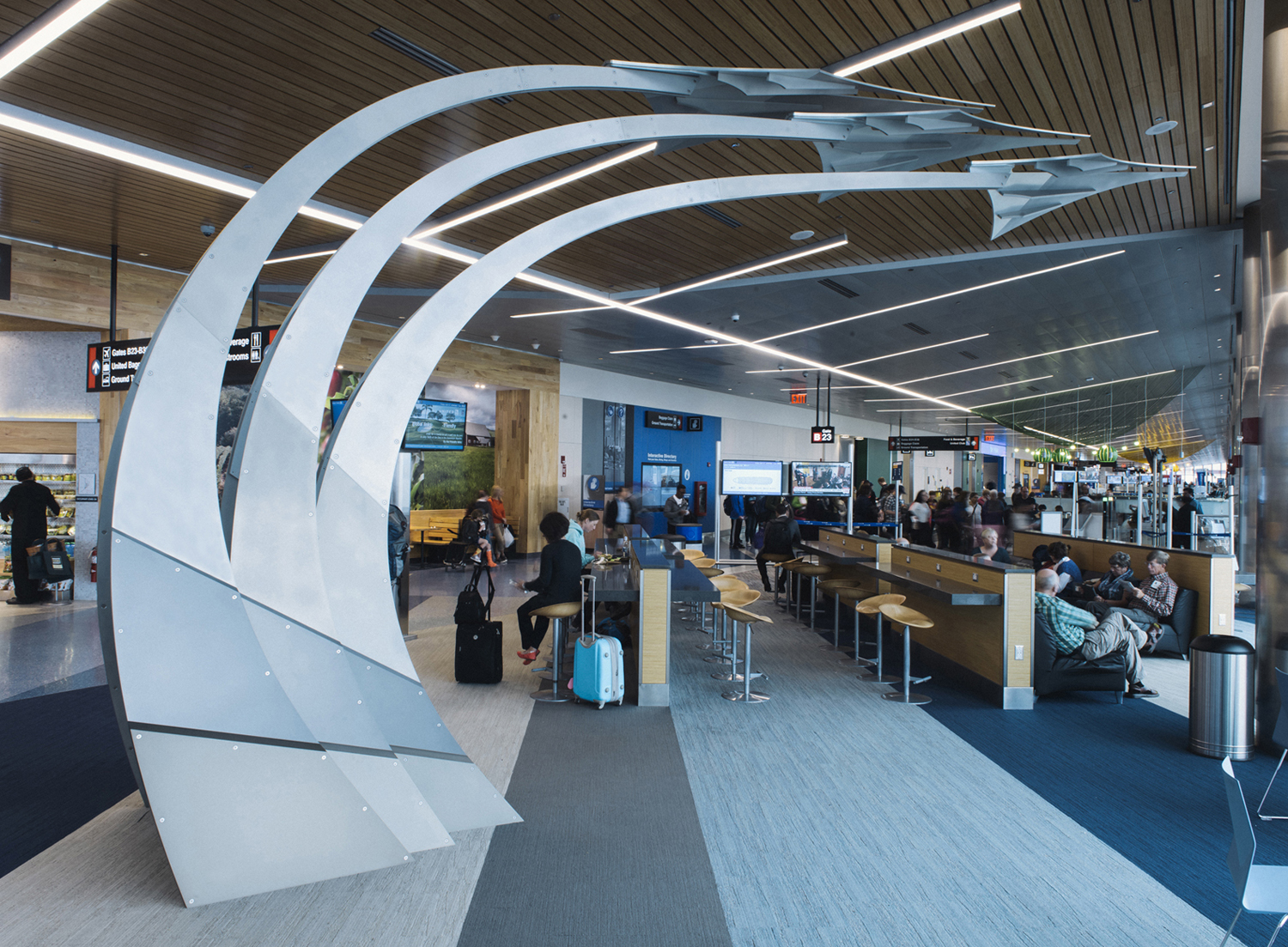 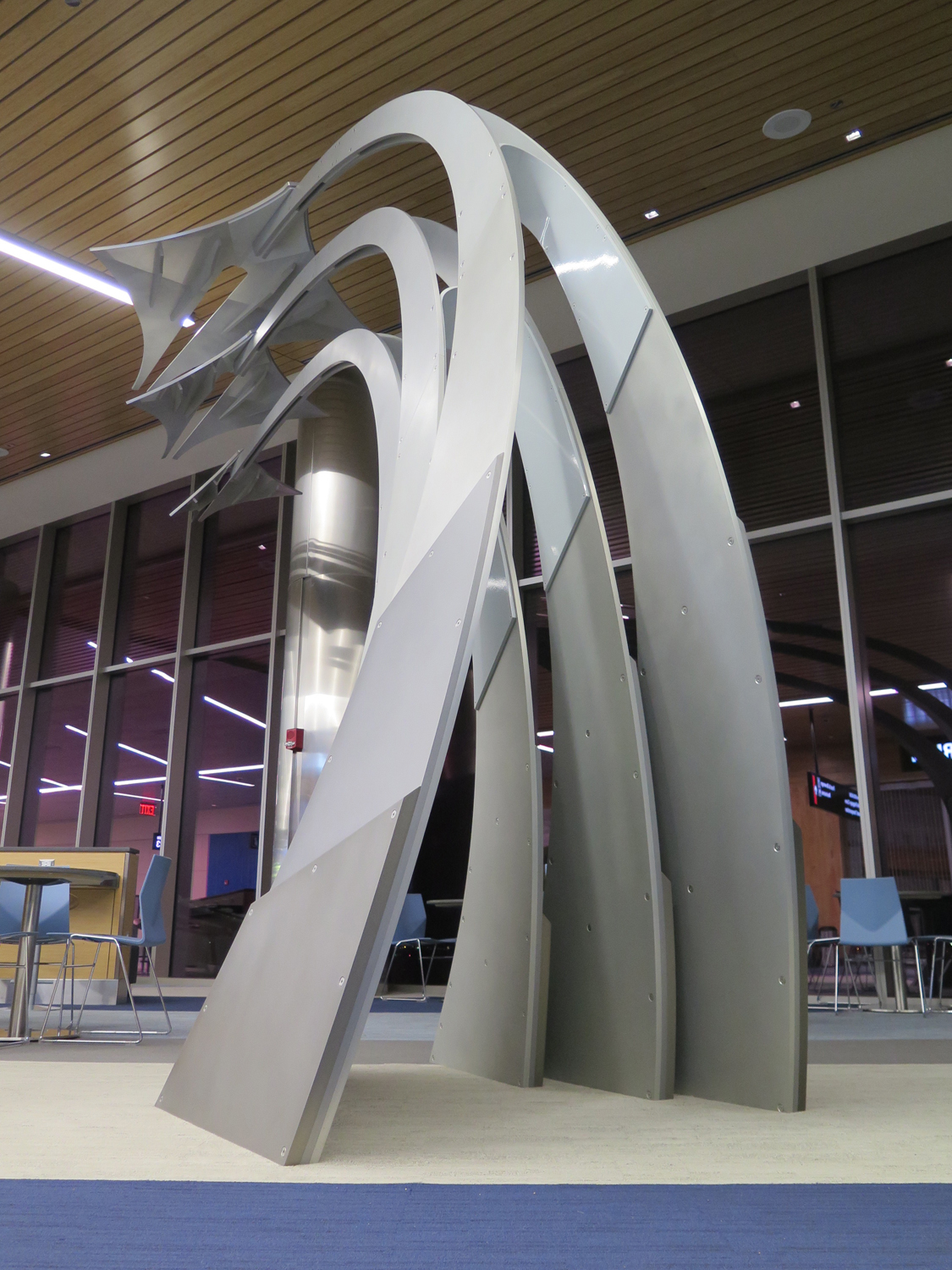 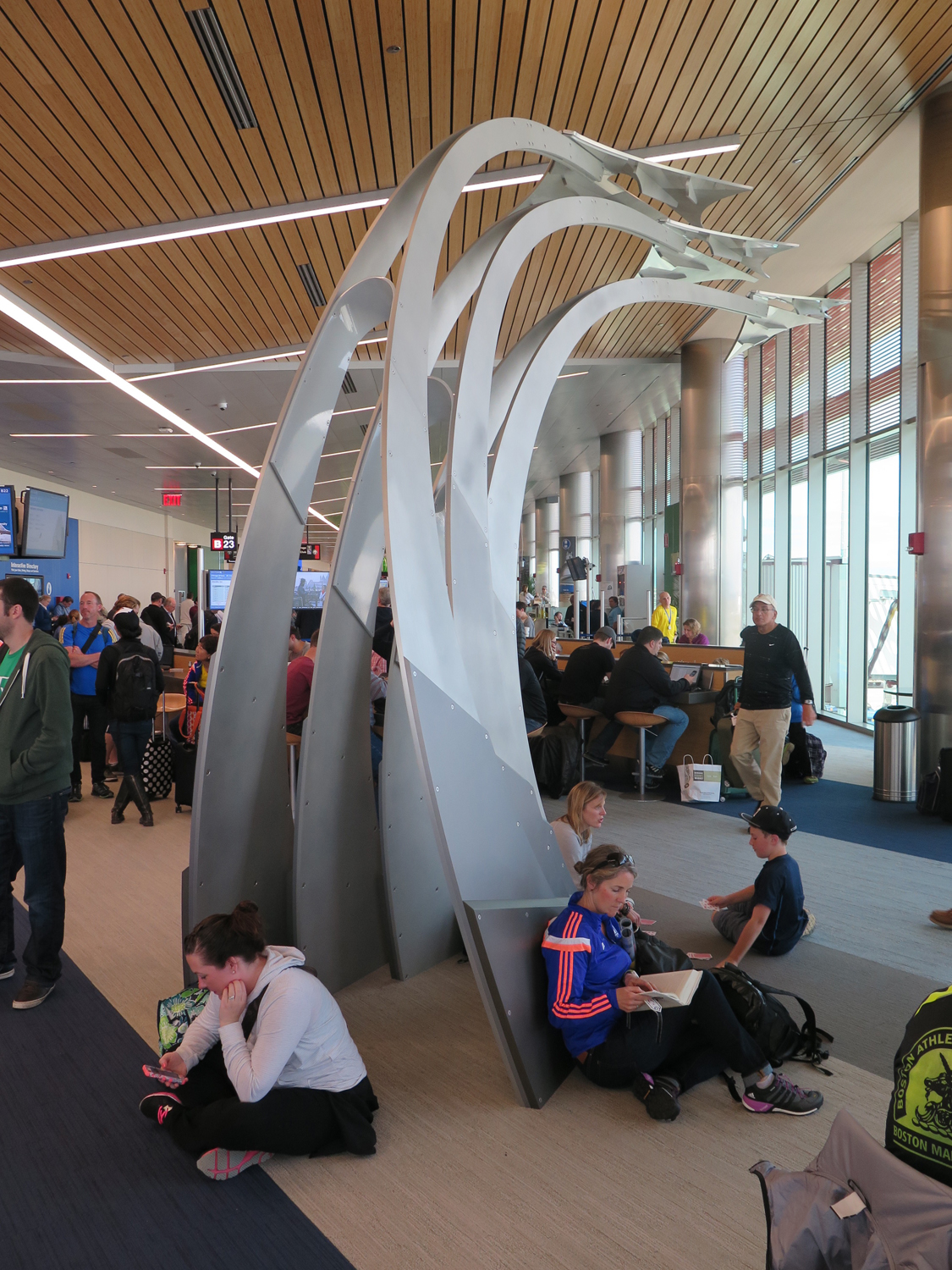 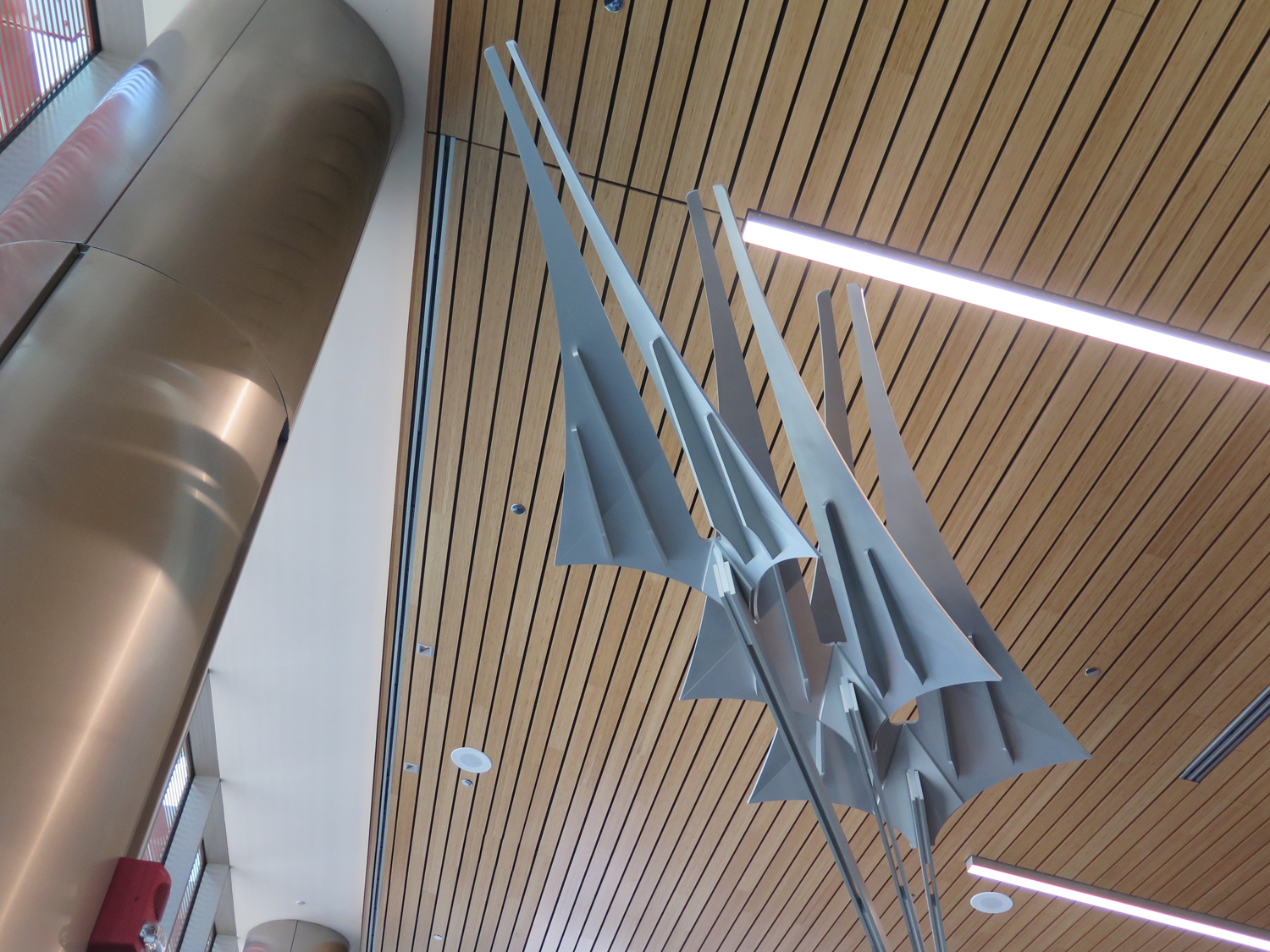 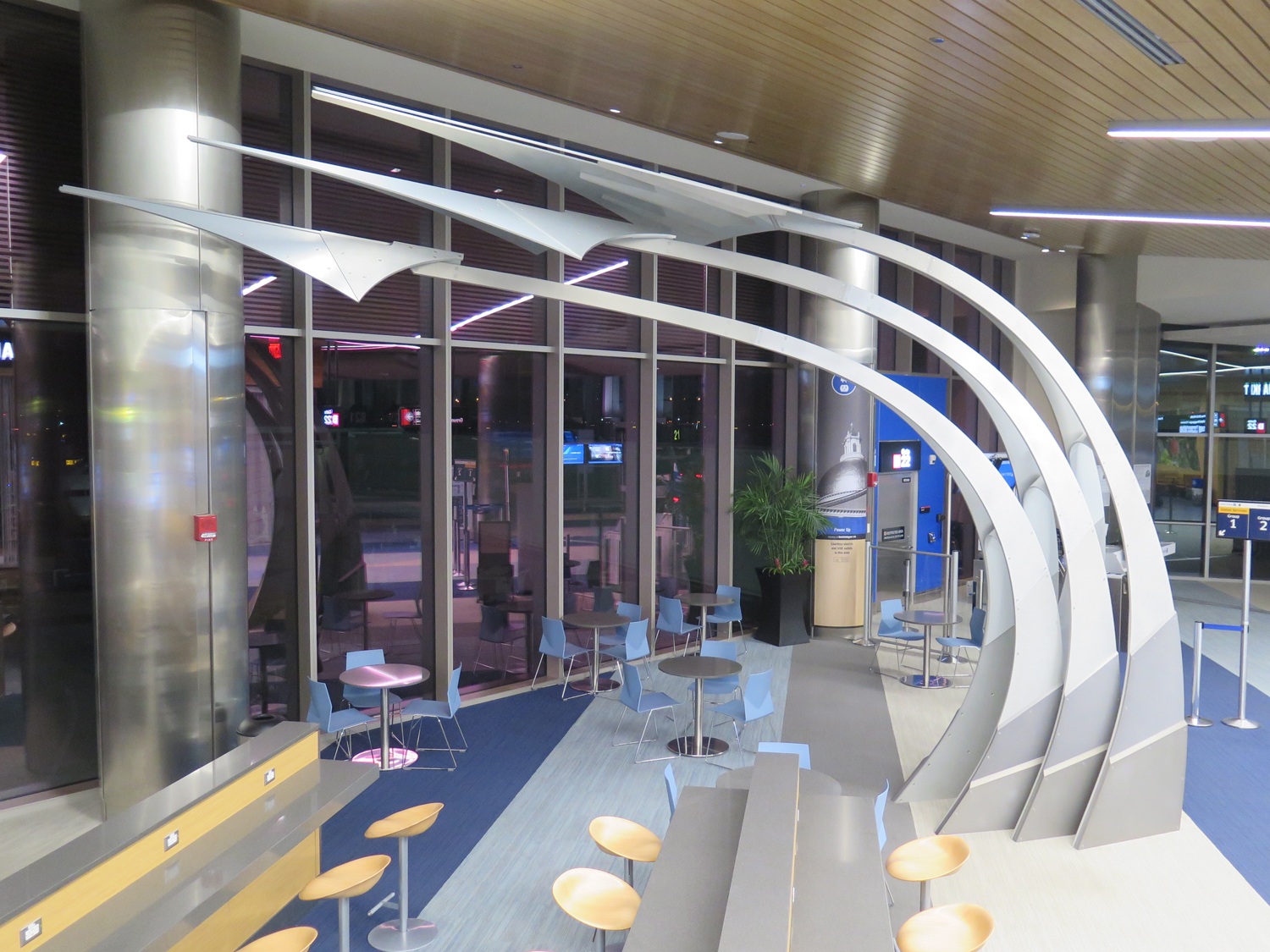 There is a celebration of liveliness at Logan International Airports Terminal B as Flyby (16ft high x 7ft wide x 26ft long) was inspired by this energy and excitement. The asymmetric and geometric patterns that animate the open expanse provide space for art to captivate and connect with travelers. This sculpture made of aluminum and stainless steel echoes notions of transition and flow with its streamlined, telescoping forms, producing a sense of speed and takeoff as the piece seamlessly rears up from the floor. Flyby expresses forward momentum and departure, paying homage to flight and themes of movement.

The goal was to create a sculpture that is memorable and identifiable, thereby generating a connection between the space and the traveler.

“Not many people think of Logan as a place to see public art, but we’re working to change that,” said Thomas P. Glynn, Massport CEO. “Jacob’s piece is unique in that it’s a large metal structure, but it’s not overwhelming. Our passengers can interact with it; they can touch it, run around it or just simply look up. The piece fits so well it almost feels like the rest of the terminal was built around it. ”

The approach began with an understanding and respect for the interior architecture of the space. The intent was to create positive reaction and interaction with travelers walking under, through or around the artwork. This floor mounted triptych sculpture comprised of smaller pieces meticulously engineered to join and connect, creating three larger distinguishable components. This process of construction allowed the work to be assembled, disassembled and transported with ease.

Kulin’s proposal for Flyby was chosen because the design pays homage to the notion of flight and theme of movement. The sculpture rises up from the floor and represents the drama of takeoff, forward momentum and departure. The materials used mimic the metallic tones of an aircraft.

Boston Logan International Airport serves as the gateway to the New England region.