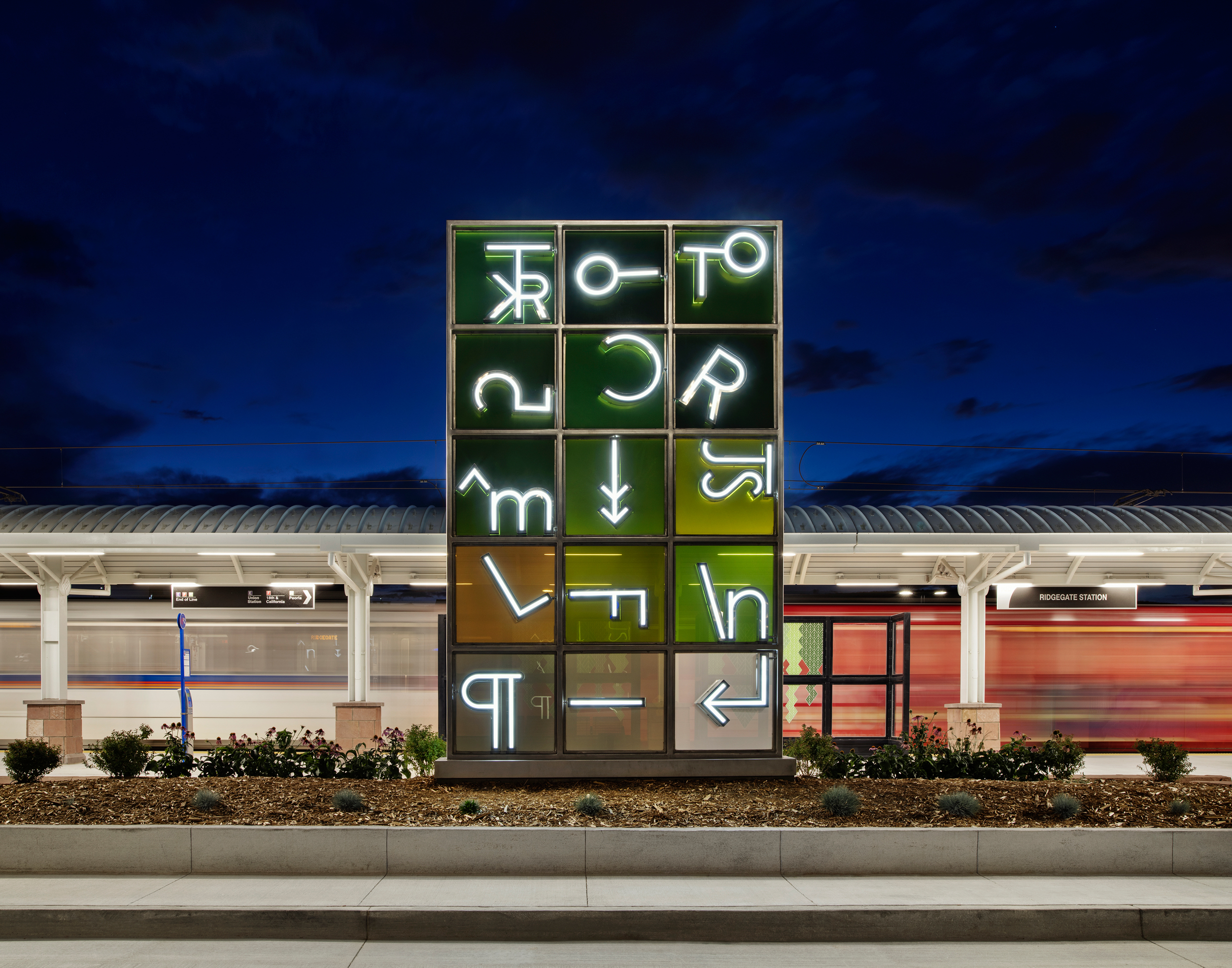 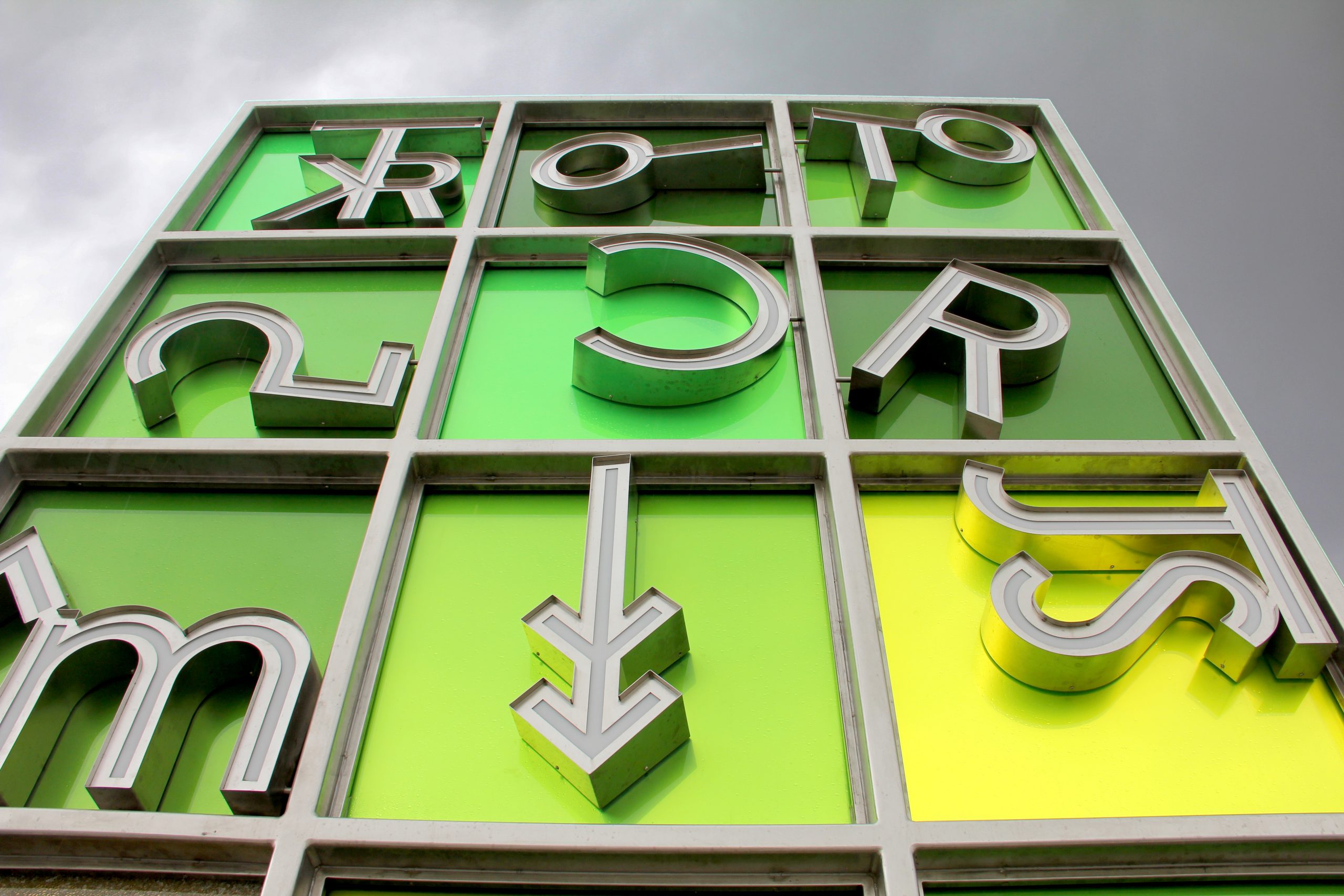 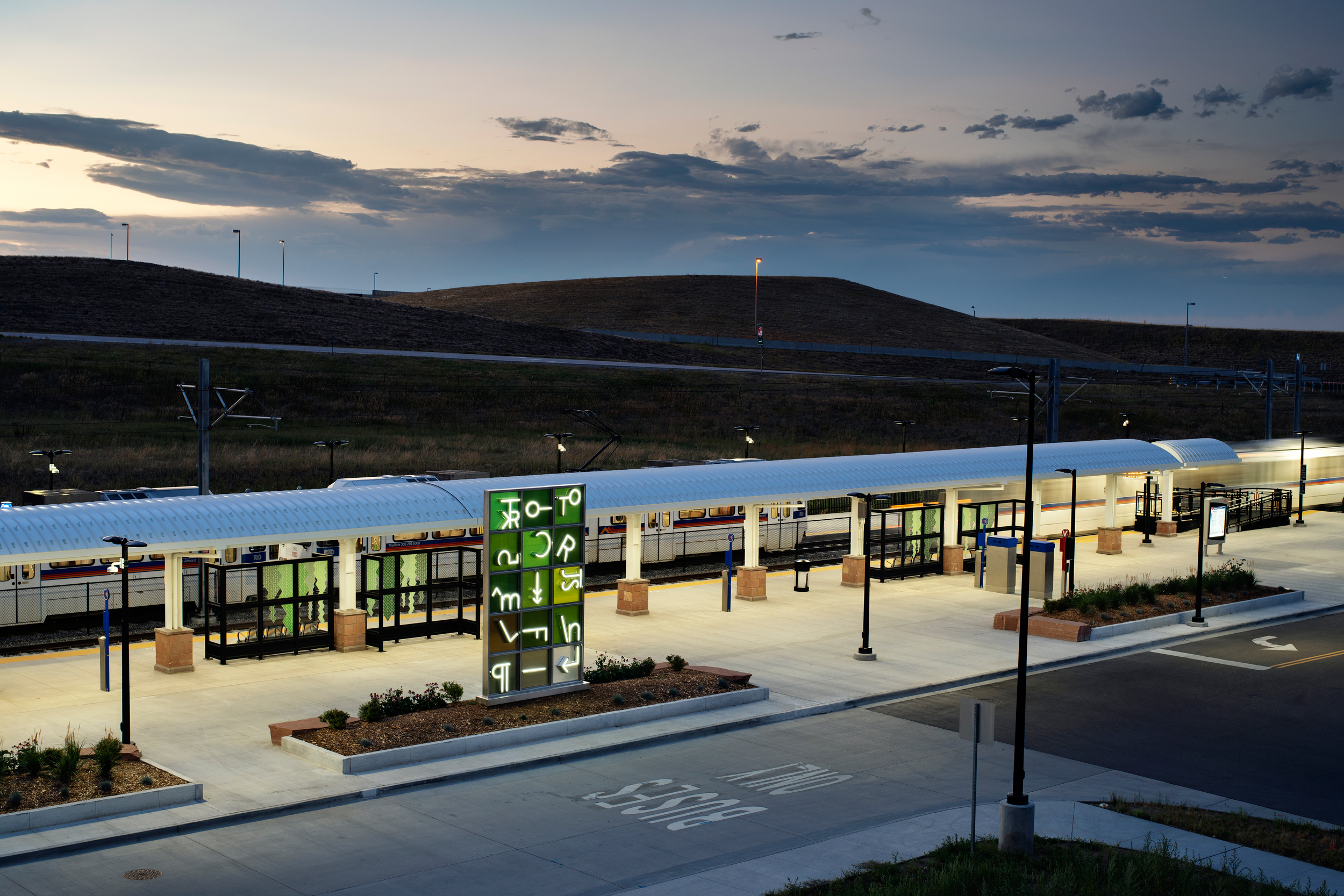 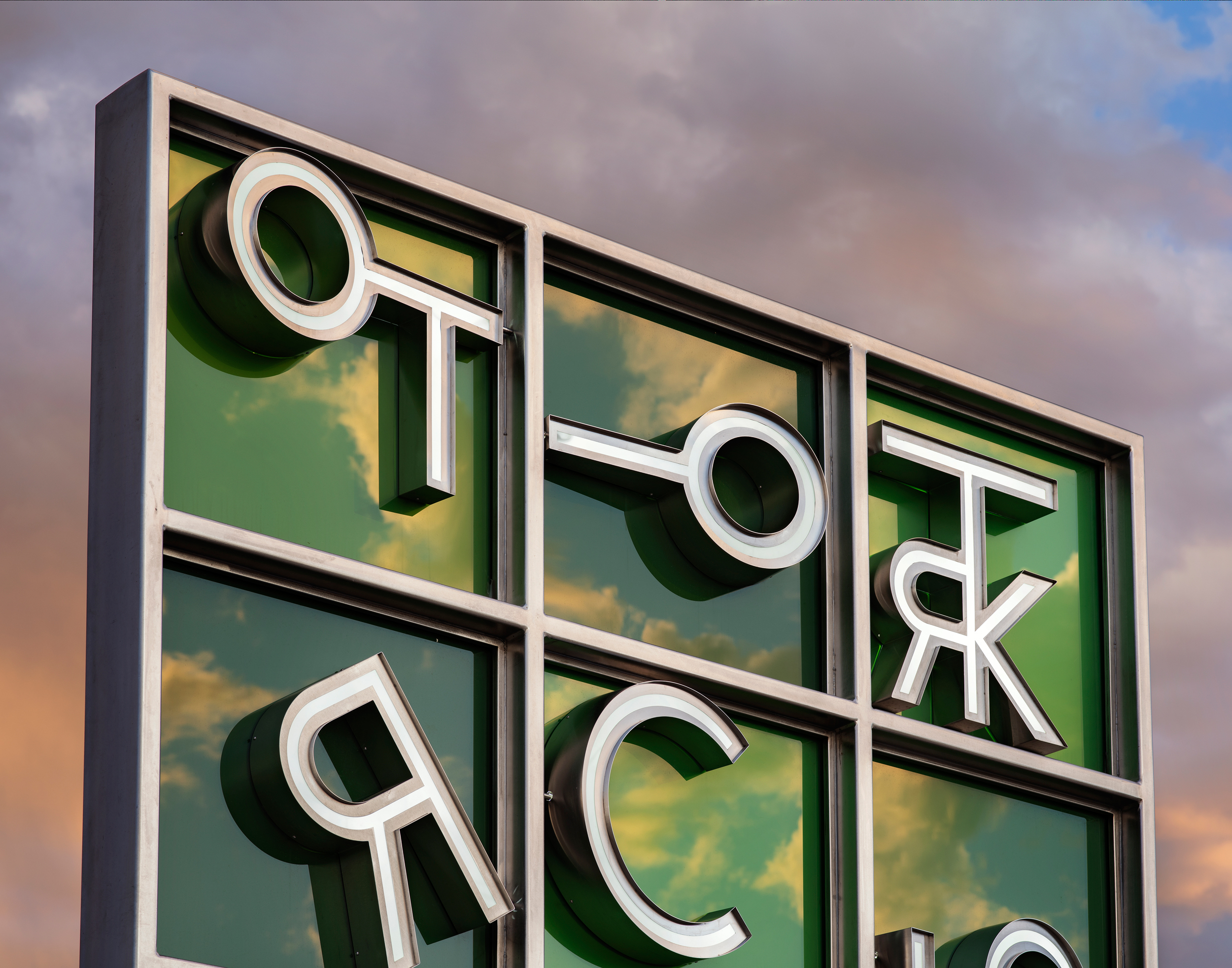 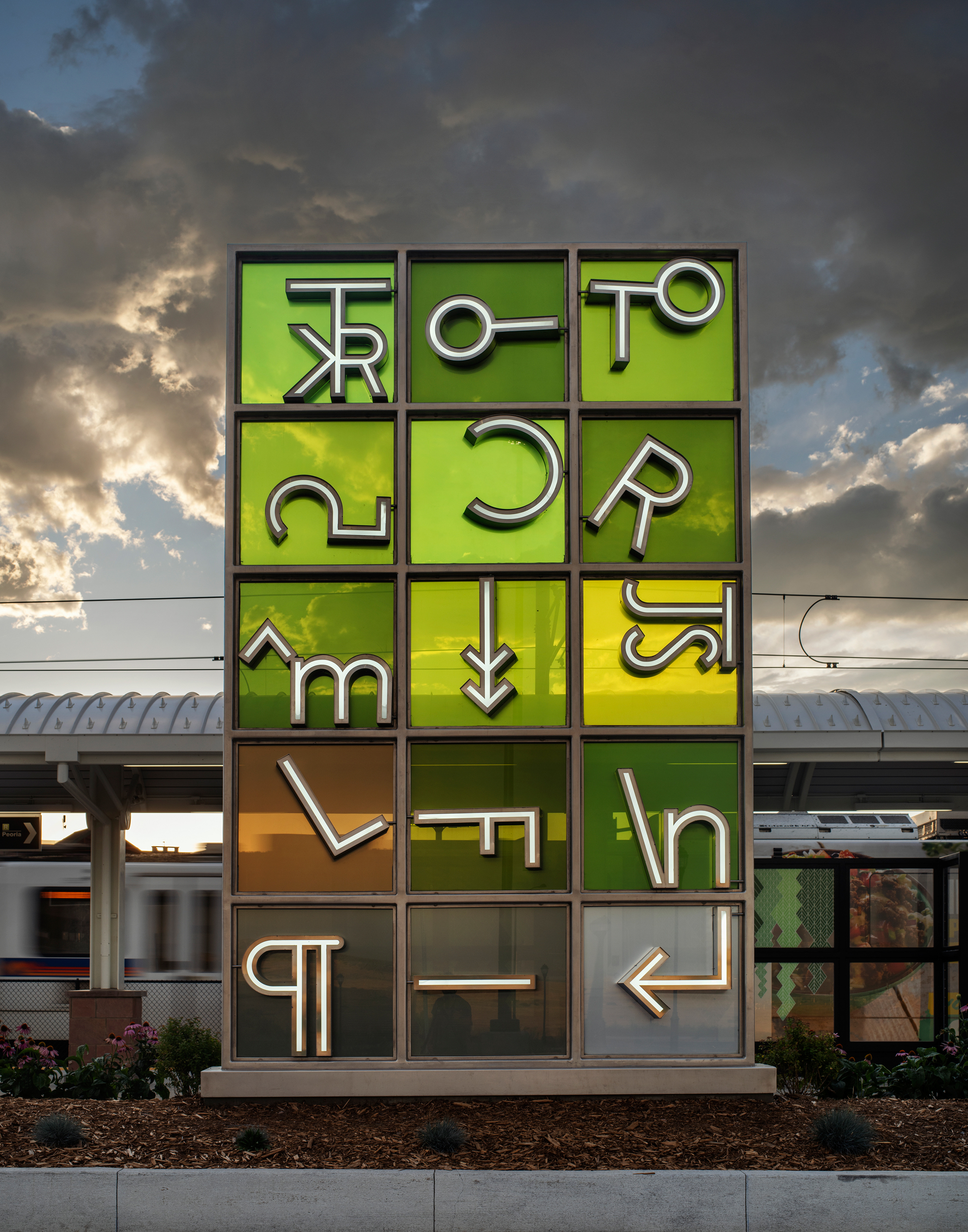 END of LINE looks at the landscape surrounding RidgeGate Station – the last stop of the RTD Southeast Extension – as a place of endings, beginnings, and transformations. The very presence of this station testifies to the changes taking place around Lone Tree as new industries transform the open hills and prairie of its agrarian past into a nexus of modern business and life. To engage this shift, END of LINE’s icons are arranged to echo the gridded plan of the main roads that connect the neighborhoods of this developing area. Scanning across or up and down, the icons shift and recombine, melding elements from two local coding systems: the livestock brands of Lone Tree’s heritage, and the computer coding language — symbols meaning “end of line” or “line break” in computer coding — of its future.

The concept for END of LINE began with what an “end of the line” might have meant for those who settled in and around present-day Lone Tree: the pioneering “rugged individuals” who were drawn to this wide open landscape and made it the place where they stopped. At the end of their journey, they laid down roots to begin lives and build communities here at the edge of the Rockies, just as people continue to be drawn to this area today, coming from near and far in search of new challenges, new opportunities, new panoramas, and the chance to establish themselves in a home and community of their own.

As Lone Tree and vicinity continues to undergo a transition from its ranching past to a more technology-based future, there is a transition in language and symbols as well. We turned to these symbols as a representation of this significant and dynamic change.

Livestock branding developed as a way to organize and keep track of one’s cattle, and remains an essential part of the ranching business. The unique brands, which were meticulously catalogued and registered into a codified system, become a typology. Within this system, each ranch or owner creates their own “brand” or symbol — highly individualized and each unique. The lay-person could not necessarily “read” these complex and stylized symbols, and even ranchers and cowhands carried their own copies of brand books that not only listed each individual brand, but also contained a key for how to read the brands themselves.

CRYPIC CODES:
In the same way that livestock brands present an opaque vocabulary, computer code is similarly obscure in its use of combinations of familiar characters that do not immediately reveal their meaning to the layman. In researching the idea of the “end of the line,” we came upon a frequently used computer coding command for “end of line” or “newline” in a program, and the numerous iterations this necessary com¬mand takes across different computer platforms and languages (CR; LF; \n; etc,). And as with livestock branding, it serves as an organizing mechanism.

The artwork represents a gradual transition of these symbols, starting with actual cattle brands from nearby ranches at the top, and shifting as it goes down to characters that, in the different computer coding languages, stand for “end of line.” The shift is gradual, as both codes share the letters of the alphabet, but combine them to form unique meanings. Thus the artwork celebrates this creative tendency found in those who’ve settled in this place.

TRANSFORMATION:
Within the artwork, these symbols are arranged in a grid but the they push against its constraints, representing the energy and individuality that led people to head west in the first place, and which continues to animate those who are drawn to this region.