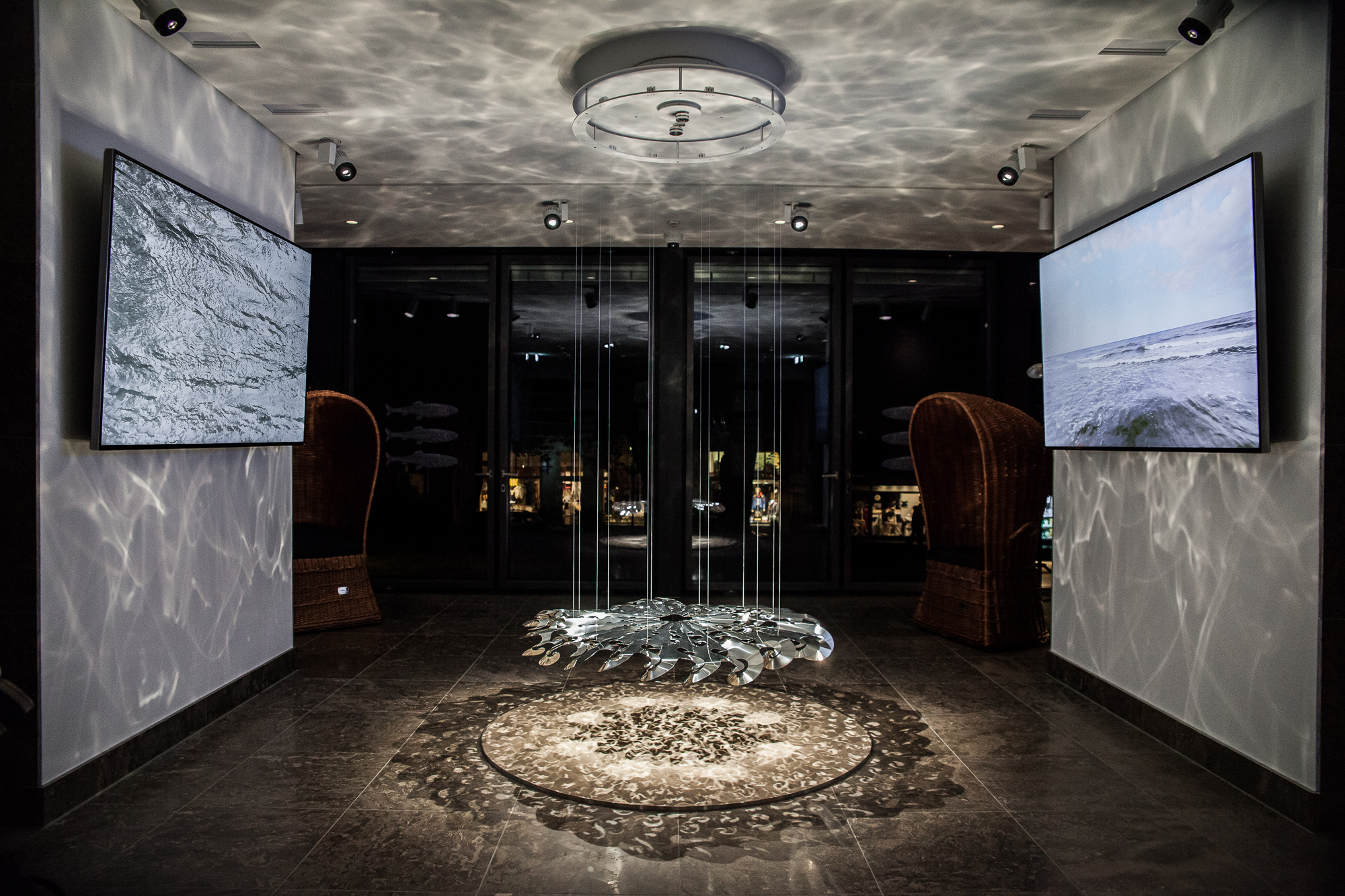 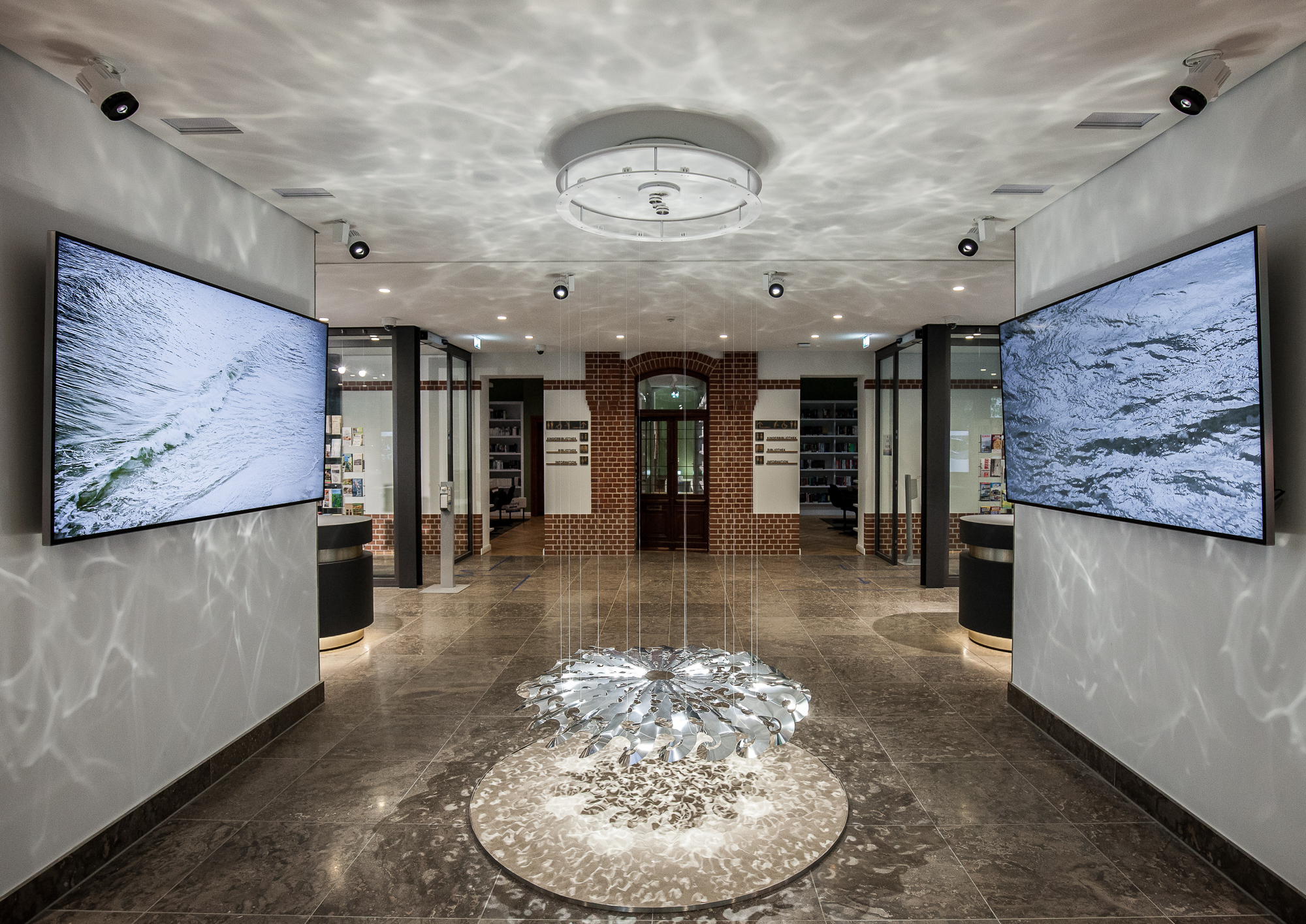 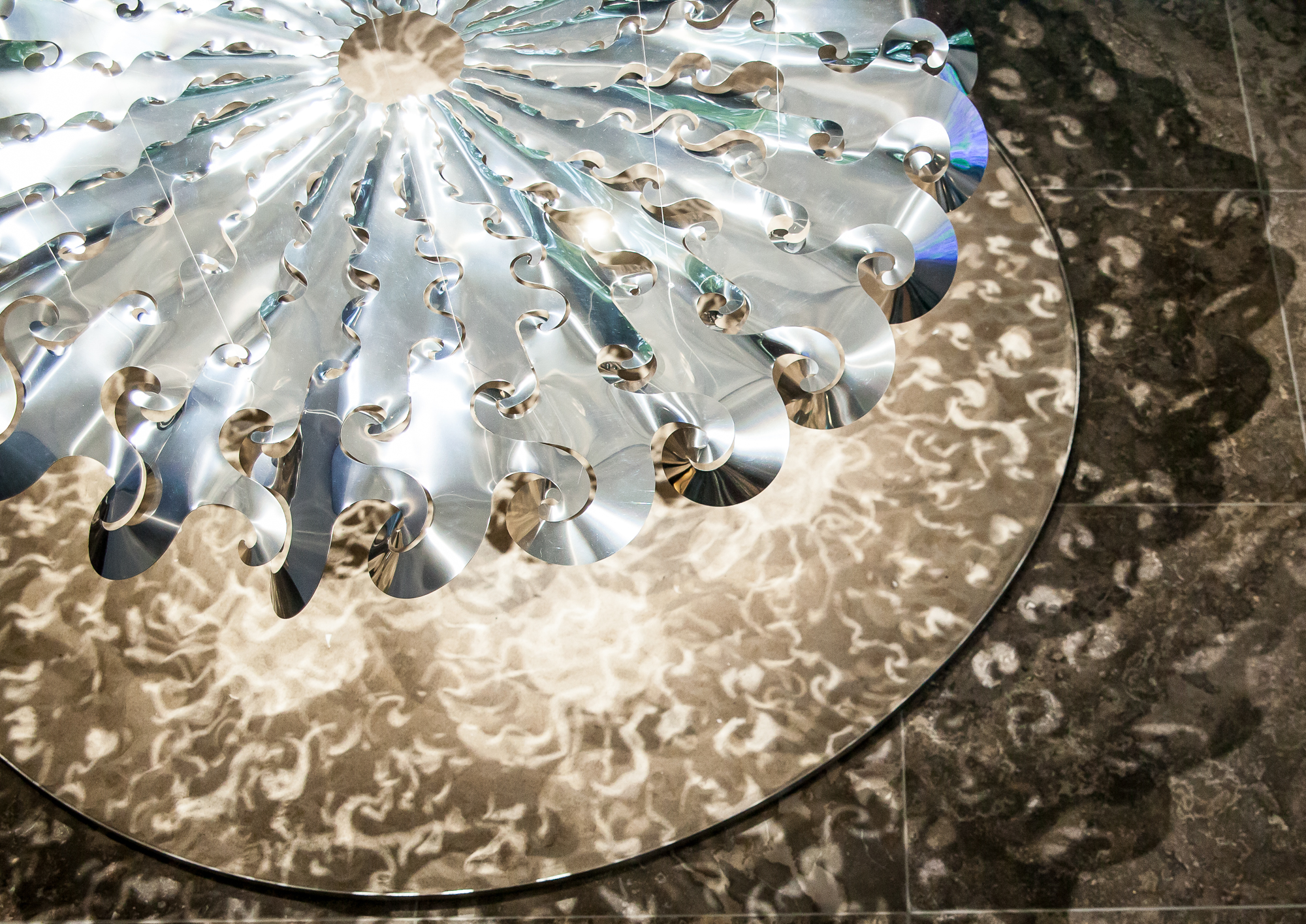 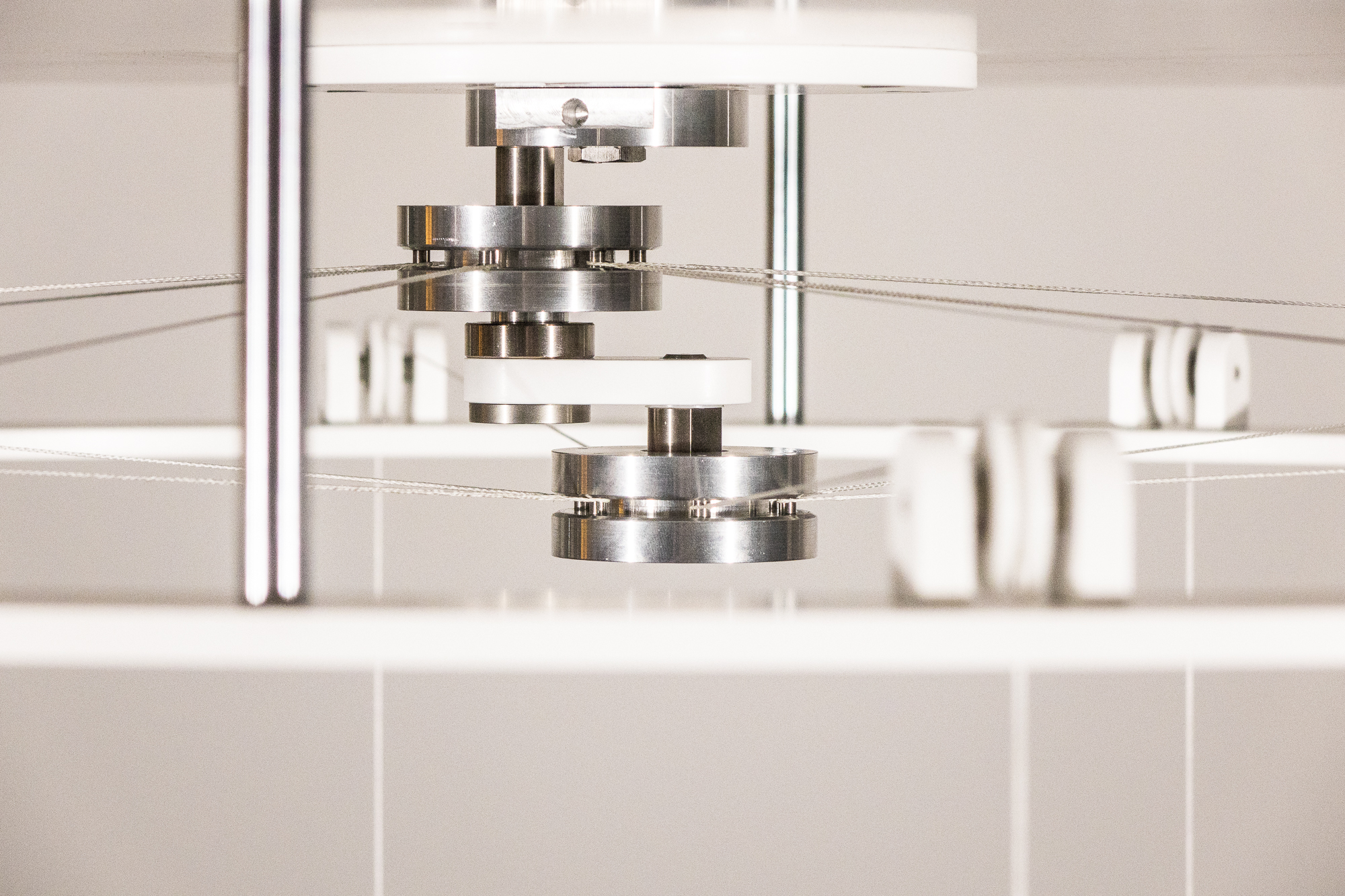 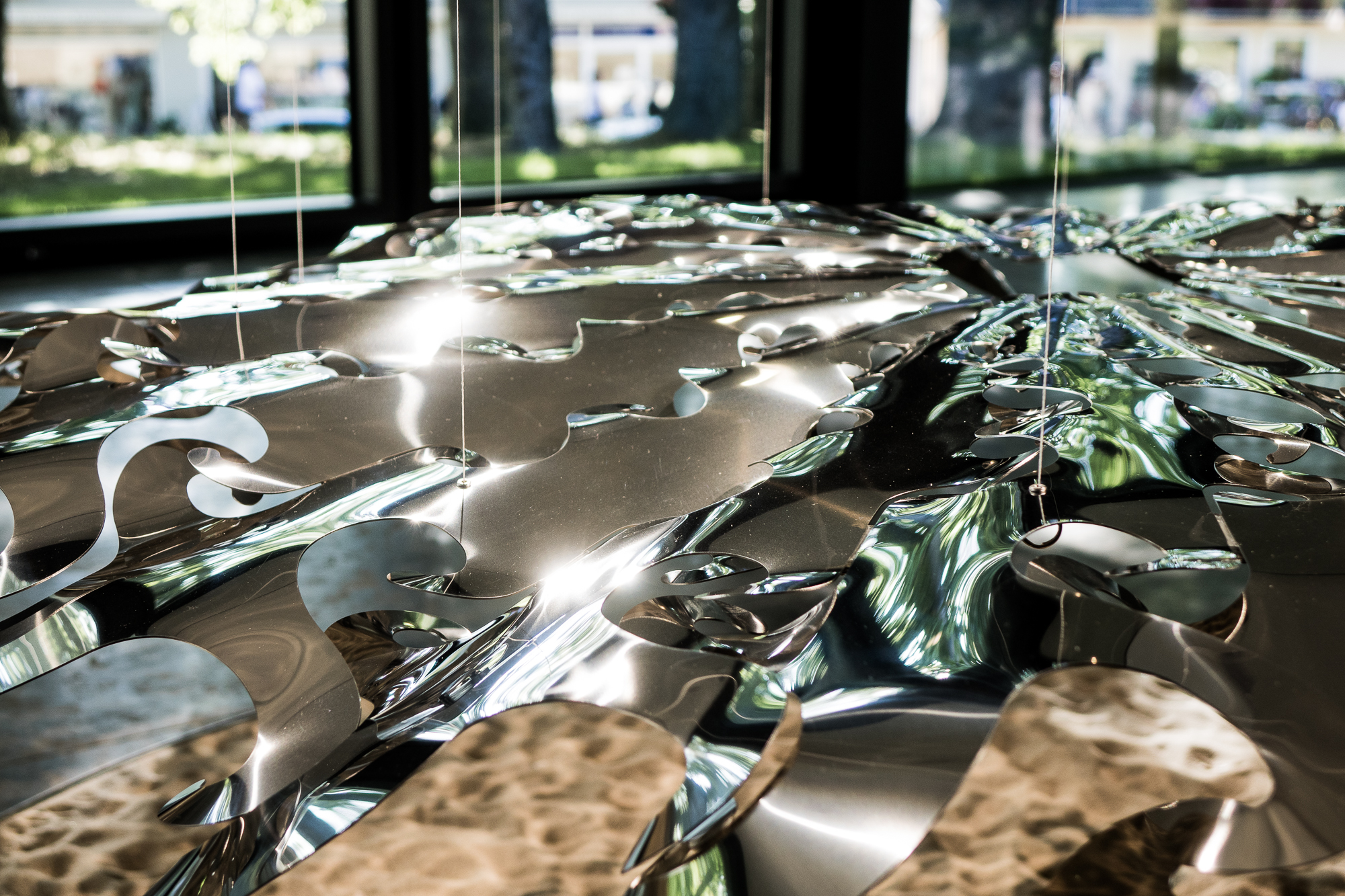 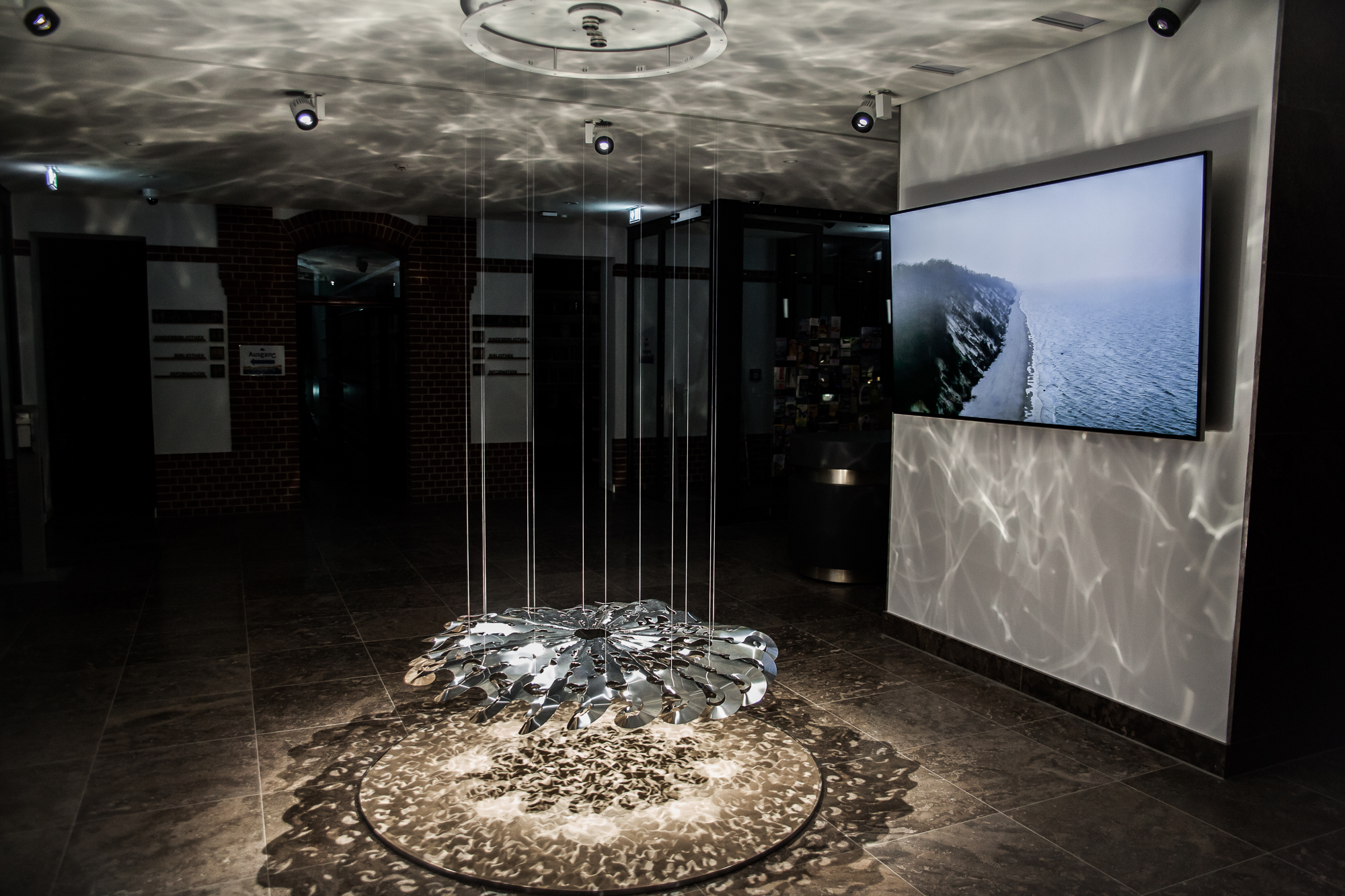 The kinetic sculpture ‘ein Tag am Meer’ (A day at the sea) is the centerpiece of the new tourist information at the Baltic Sea in Heringsdorf. It stages the feeling of a day at the sea in an indoor space.

A freely suspended structure of 24 mirrored stainless steel segments, which interlock in a wave pattern and form a round surface, is hanging on almost invisible strings. At constant speed, a motor at the ceiling moves two opposing rope bearings. The mirror segments suspended from the strings thus create two shifted sine waves, giving the reflecting surface of rigid stainless steel the appearance of a fluid surface.

Eight spotlights, which are mounted in a circle on the ceiling, shine on the reflecting surface, whose light is refracted by the wave-like segments as they move. The reflections on the fluidly moving surface immerse the ceiling and walls in the gentle play of light on glittering water. A circular ring of Baltic Sea sand beach forms the boundary on the floor, on which the shadows of the floating structure are reflected and pick up the geometric forms of aquatic life.

While playing an important role in the foundation of the village, now after the renovation the Kaiserbäder Usedom once again becomes the central starting point for visitors arriving at the baltic sea. With its new annex it accommodates the local library as well as an interactive exhibition about local history and nature.

Studio RLON played an important role in the creation of the interactive exhibition: they were briefed to transport the calm and relaxing atmoshphere of a day at the sea into the space. The sparkling light reflections of sunlight on the peaks of waves, the impression of vastness and tranquility are the inspiration for this kinetic sculpture. Wave-shaped mirror segments float weightlessly in space. The reflections on the fluidly moving surface immerse the ceiling and walls in the gentle play of light on glittering water.

During the implementation it was particularly important for studio RLON that all elements were openly visible to reward the curiosity of the viewers. They can immediately recognize that the glittering surface, which seems to float weightlessly in space and seems to be fluid, is obviously not made of water but of stainless steel. The soundless mechanism can be completely deciphered and therefore reveals the physical properties of waves and particles on closer inspection. In this way, it is possible to see exactly how the individual elements contribute to the creation of the effect.

In the process of developing and testing different patterns, great inspiration came from the physical properties of turbulences in fluids, mathematical spiral patterns and organic geometries as drawn by Ernst Haeckel as well as the symmetry drawings and tesselations of M.C. Escher.